I love making toys, and have used various methods, including knitting, crocheting, sewing, clay modelling and needle felting. I sometimes follow patterns, sometimes just make it up as I go along or follow my own plan or drawings, and sometimes copy a toy I have seen or own. The main reason I copy toys I have seen, or make toys or models from drawings, is that I can have one myself. If they are very expensive or old and unobtainable then problem solved! I even made a Picasso once. In my search for it, because I don't know if I still have the actual thing, I found this great post on Mondo blogo, on toys, based on an exhibition I wish I had seen. The one I made is right at the end and is called 'Figure'. 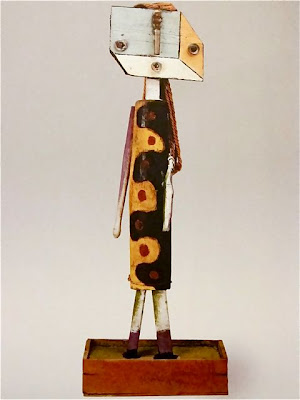 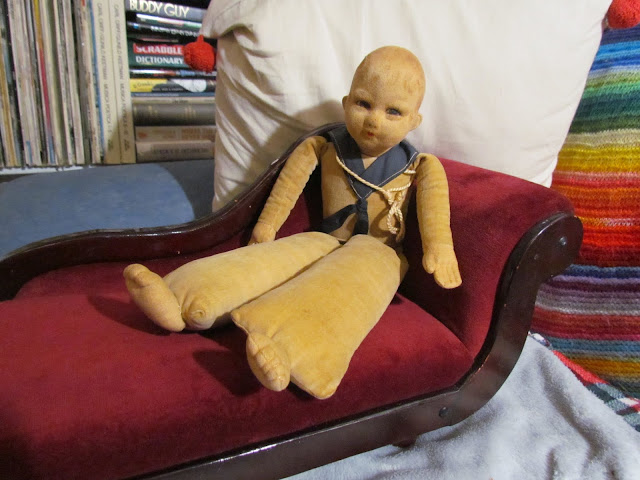 This is the boy that Linda Sue sent me. He is a Norah Wellings doll. He is made of very soft velvet. I wanted to have a go at making a similar doll, as I love the way his legs are joined. They give him such a feeling of movement as they are not stuffed at the top so swing around, and then allow him to sit easily and have exaggerated perspective when he sits down. I found a beautiful blue velvet piece in my Mum's loft and thought that would be perfect. I decided to make a prototype first though so I don't waste the velvet. It is a good job I did as there were a number of problems to making this deceptively simple doll. The main two were how to sew the already stuffed legs right sides together to the body. I know how to do it, but the fact they were stuffed meant that I couldn't get them through the inside out body. I solved this on the prototype by using a piece of sock as it is stretchy so I could stuff them in. I am not sure what I will do on the velvet version yet. My Dad said that if you have a problem making something then you need to go and have a cup of tea, and 'put a coat of thinking about it on'. This is what my Grandad used to tell him apparently. So I will. 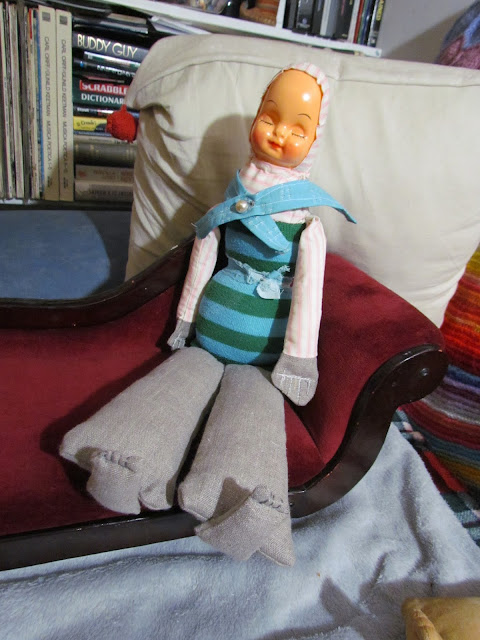 The other tricky bit was the face/neck attachment. As you can see, she is quite a lot longer than the model, due to the neck. She also has been having far too much cake to eat. 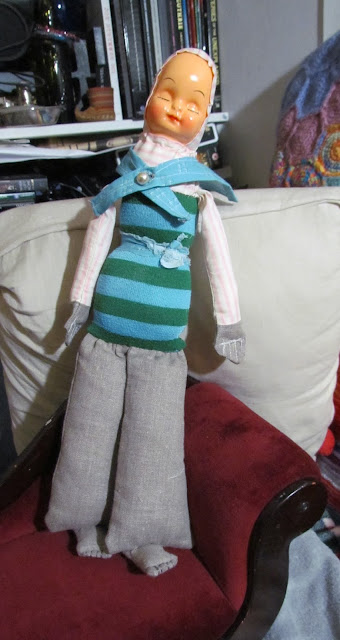 I am most pleased with her feet. 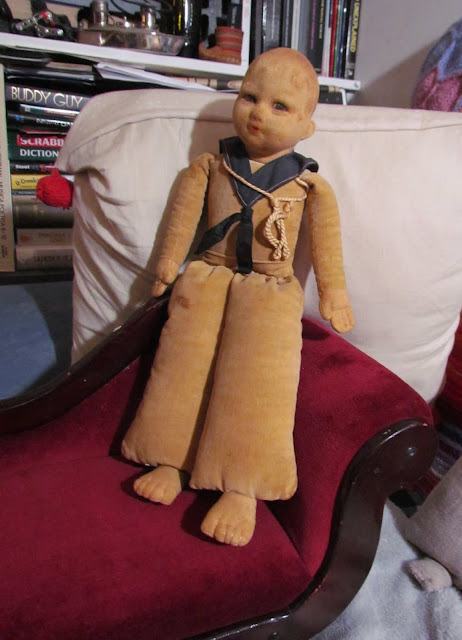 Next comes this little cat. She is made of painted fabric, trying to look like oilskin, and based on this one.  The most fun part of this doll was roughing up the fabric to make it look old. The other most fun part of all toy making is doing the face, which often comes last. It makes them come alive. (Sorry if you are spooked by dolls, probably the thought of them coming alive is quite scary!) 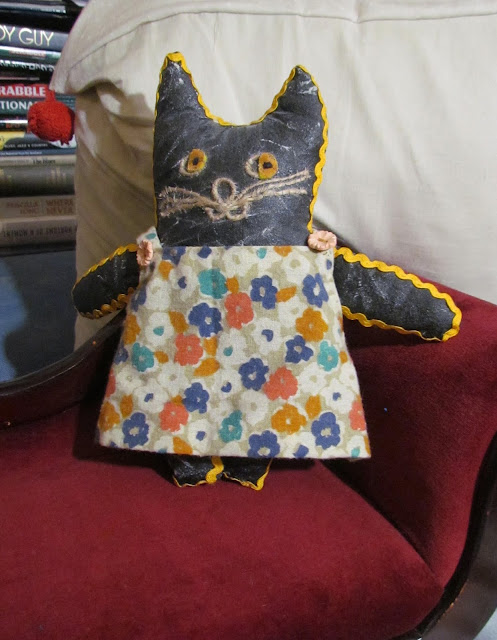 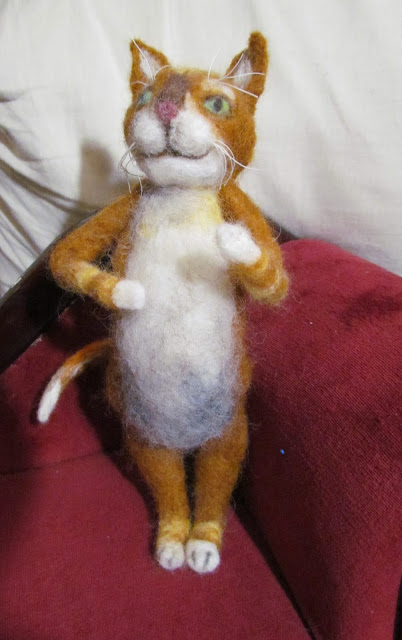 This needle felted cat was inspired by a painting by the artist Rladimir Rumyantsev
https://vsemart.com/painting-cats-vladimir-rumyantsev/ The painting is called 'God It's Me' and is of a cat at the top of a tree looking to the sky. I saw it on Pinterest, as I did the oilskin cat. 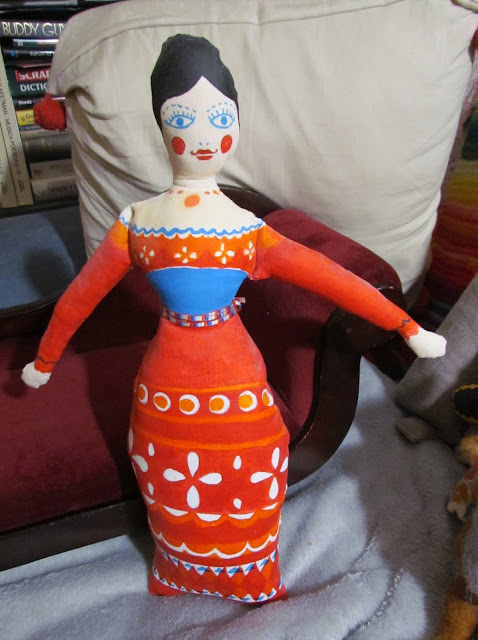 This doll was one I saw on eBay but didn't buy. I found another listing with link below, though it may not work I suppose when it has sold. She is called a Pollyanna doll, and is one of those ready made sew together patterns that were popular in the seventies. I have also seen her in an article about a woman with very similar taste to me in a magazine called 'Reclaim'. Spookily similar actually!
https://www.etsy.com/uk/listing/799642890/vintage-pollyanna-rag-doll-kit-1965?ga_order=most_relevant&ga_search_type=all&ga_view_type=gallery&ga_search_query=60s+rag+dolls&ref=sr_gallery-1-14 She is also painted fabric. I use gesso then acrylics.

I am really a terrible hoarder, or else do not have a big enough home to accomodate all the things I have. I am always getting rid of things but more seem to accrue. But the dolls and toys will not leave. They like it here and so will stay. More come to join them on a fairly regular basis. Some are from charity shops, the latest of those being the rabbit I painted. At the moment a fair few have come from Mum's. Sindy below was in the loft for probably 35 years and has finally been released. And some come from kind friends who know what I like! Below are the newly(ish) arrived girlettes from Fresca. They took a while to arrive and here they are having much needed tea with Sindy. The girlette in the middle is the one I found on eBay who is just going to keep her name Madeline. On the left is Minnie Sutherland and on the right is Racer. They have settled in well now, and have even been out on one trip, which I will share later on.

All dolls inspire me, whether I make them anything, make one of them or just play. I have a lot of medium sized doll furniture which I have collected over the years. Beds, a sofa, a chaise longue, (up above with the boy and girl dolls on) a wardrobe, an old trunk, chairs, benches, a lovely old cooker, chests of drawers, and the most recent, the table and chairs below. I have always meant to make a huge room scene, populated by the dolls, and take photographs, but have not got around to it. Perhaps I will soon. It will only be temporary anyway, while I take the pictures, then I can put all the things back where they came from. 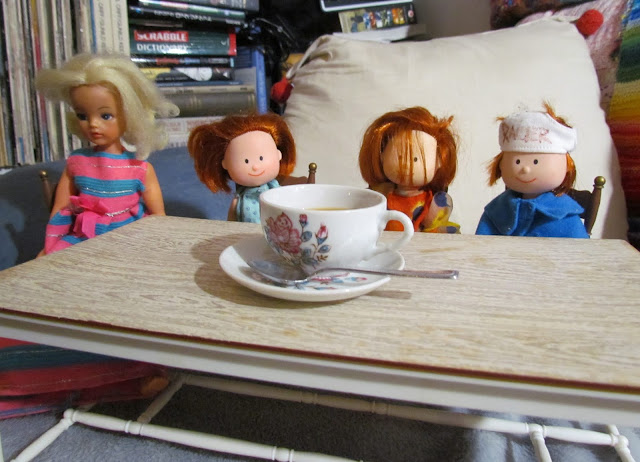 The cup of tea was big enough for them all to share. I was a bit worried about putting real tea on the sofa where they were but they were very sensible. The cup is part of a set I played with when I was little, also found in the loft. The teapot is missing. Not sure where it got to. Maybe it was broken. 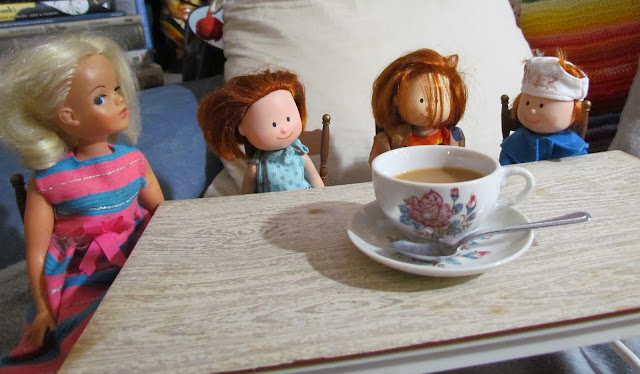 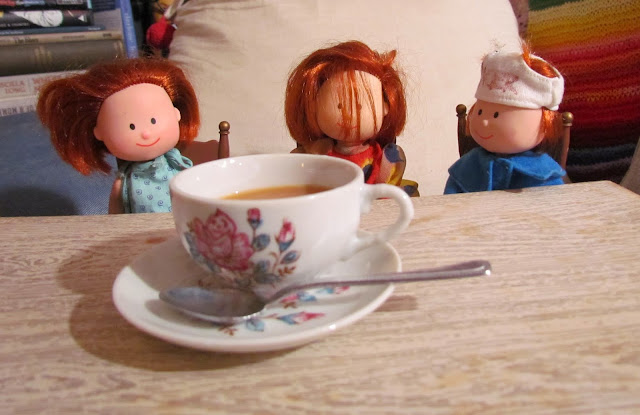 Sindy only has one shoe, and became a bit obsessed with that during tea. She got on the table to show us. Maybe 35 years in a loft makes one forget one's manners! 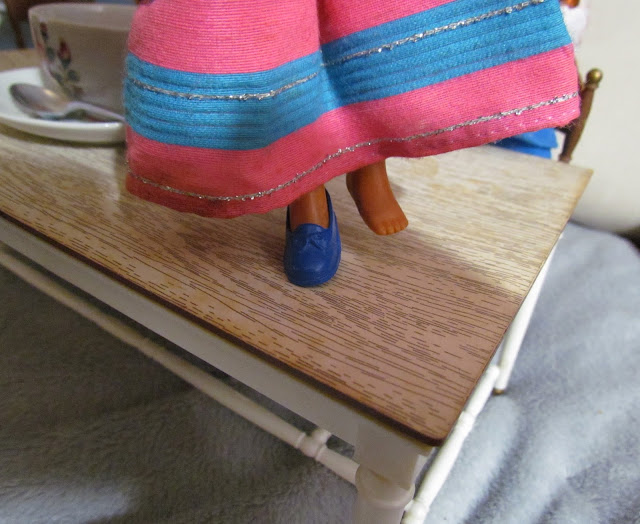 The girlettes like the big shoes I found the other day  in the charity shop. I know I shouldn't, but when I am donating I can't resist having a look. I feel it is a win if I come home with less than I take. 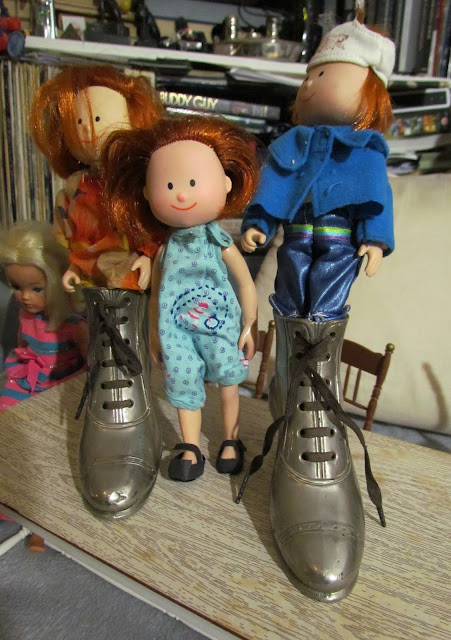 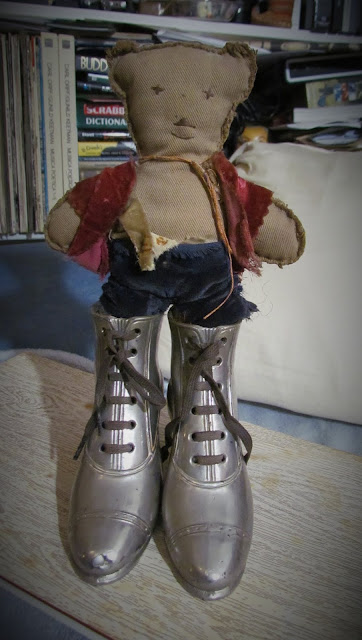 wow great job on the legs toes and hands of sailor boy turned to be a plump cake eater!
I found this on etsy and thought you could make it in a snap!

You have been busy and so so so creative as usual, yes, you could use a bigger house , all of your belongings are wonderful!You really could open your own shop, make a million pounds and move to bigger digs! Glad to see this post!

I LOVE the felted cat, too, Great job

Oh my, so much goodness, I don't know where to start.

Well, of course I do: WITH THE GIRLETTES!!!
It makes my heart sing to see them so happy--you can see it on Minnie & Racer's faces that they have landed in the Land of Toys & Clover.
Lucky girls! And with a new Madeline friend too... And shoes!

And the promise of Too Much Cake, as evidenced by your handmade doll, which the girlettes may think is Just the Right Amount.

Thank you for the updates.

I admire your toy-making tremendously.

Especially your cats! One can see you love cats because you've managed to catcht their cat-likeness in your toys, which is hard to do. There's something elusive about cat features... compared to dogs, anwyay, I think.

The hinged doll is intriguing---looks like the hinged wood dolls replicated in cloth.

Thank you for all these wonderful things.

I'm glad to see you have some Fresca girlettes to add to your collection! (And to keep your Madeline company!) I love the printed fabric Pollyanna doll -- very groovy. I'm impressed at your ambition as always!