Our garden is a mess but I am finally beginning to sort it out. I always leave it too long, then have loads to do, but would rather be able to do a little each week to maintain it. I have loads of things to clear still since before the lockdown, and I am only allowed one visit to the recycling centre per month. I take garden cuttings there as well as other things, so at the moment I have lots of bags, and some furniture ready to go. One of the pieces is a large footstool that I got on the street, mainly for the brass casters. It made a good seat for a while outside but needs to go. I could not unscrew the casters at the time, so I sawed them off the other day. There is the outside of some drawers I don't like, though I have kept the drawers as they make good temporary bookshelves. There are various metal things I found, but didn't do anything with, and some old enamel teapots I kept for years, in the hope of making a teapot tree like one I saw in France once. It's never going to happen! And at least the are recycle-able. So today was mainly putting the tip stuff in one place, sweeping, tidying, and putting all the flower pots up the top to have a wash. I did a little weeding and chopping, and picked up cat poo and fox rubbish. They bring in all sorts of unsavoury things, like old nappies, then put them under plants where they are hard to reach. I wore gloves for that job! 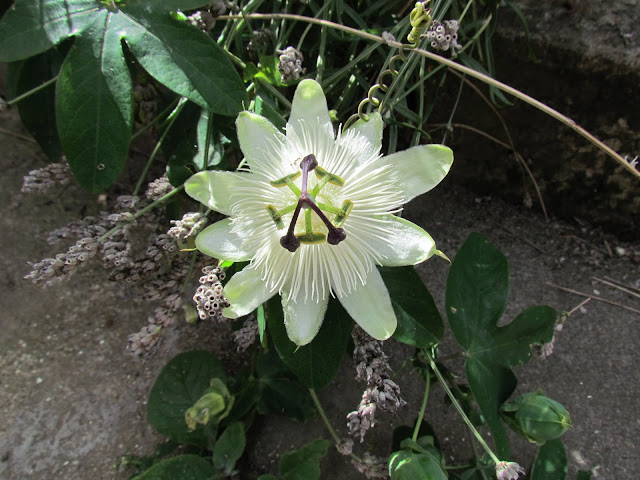 The year before last I bought a passion flower, and it died after not too long. So last year I got another one, and planted it in the ground rather than a pot. I forgot about it, until it started flowering recently. I didn't realise it was a white one, as the others I have had before were purple, but I love it nonetheless. I remember I saw my first one when I was living in Leicester, and couldn't believe how intricate and layered the flowers are. It is called  Passion Flower as the different parts are supposed to represent the passion of Christ.
Below is taken from Wikipedia, 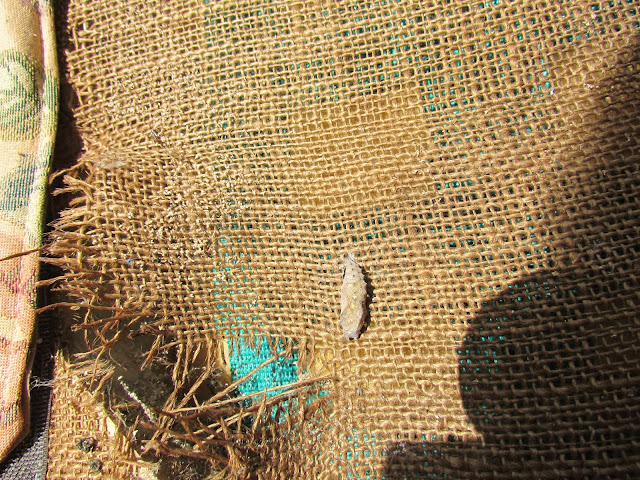 I was moving the legless stool when I noticed this chrysalis underneath it. I cut it and have hung it in the buddleia. I was amazed that there are shiny gold areas on it. Really golden and metallic looking. I have not tried to find out about this yet, but I will. (Just looked. I think it is a red admiral. The gold parts are for oxygen to enter. When I looked on google images, there are some beautiful ones, some all gold. Just amazing! 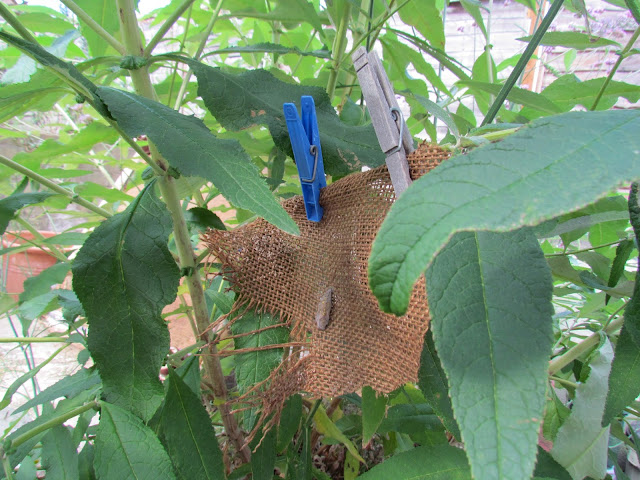 As I was collecting pots from around the garden, I found this snail hotel. It is broken so needs to go. I took all the snails off and put them under the buddleia at the end of the garden. I have not got the sort of garden where snails can do much harm. The plants there are don't seem affected. I had dahlias for a while and they were a different story. Decimated overnight! There were also some pots I had to leave as I couldn't bear to make the spiders living in them homeless. One I turned over was full of webs, and three egg balls-white web things where I know the babies are. I watched the spider going round checking the web and all the egg things, then turned the pot back over. I can do without it! 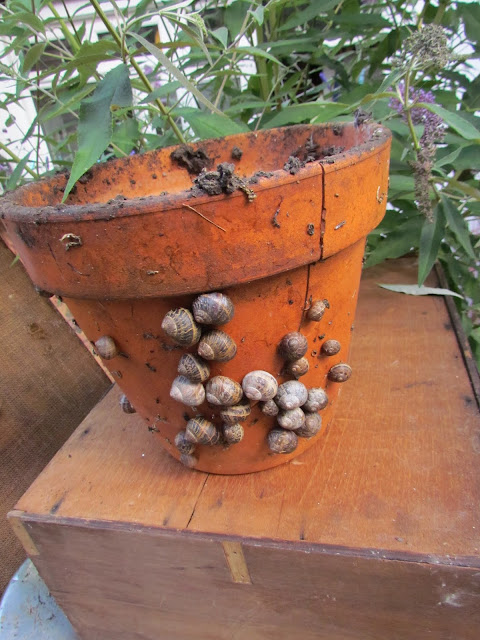 i love your feral garden! the snail pot is a thing of beauty, as is the golden blob waiting to become more of itself. Chacha, is the most handsome, thank you for giving him a party.
Clearing out stuff is the thing to do these days- I keep thinking that if covid gets me, or the usual american violence...I will not be an embarrassed corpse when the living have to comb through my stuff. Slowly getting it sorted, put away, loads of storage boxes under beds. You know the drill. Anyway, good job, well done. Nice saving of creatures!

What a face Chacha has! I'm so glad you saved the snails and of course the butterfly chrysalis. I'm always picking snails off the pavement and putting them in a safe place nearby so they won't get stepped on. I think other pedestrians must think I'm insane.

You and Stever must be members of the Society for the Prevention of Cruelty to Snails and Spiders.

Chacha is a striking cat!

And that red admiral chrysalis!!! I looked it up and it looks like some fantastical sci-fi creation--like the mystery pod Linda Sue posted the other day...
Also reminded me of the Japanese art of repairing pottery with gold. (kintsugi--had to look it up)