Random Selection From the Last While 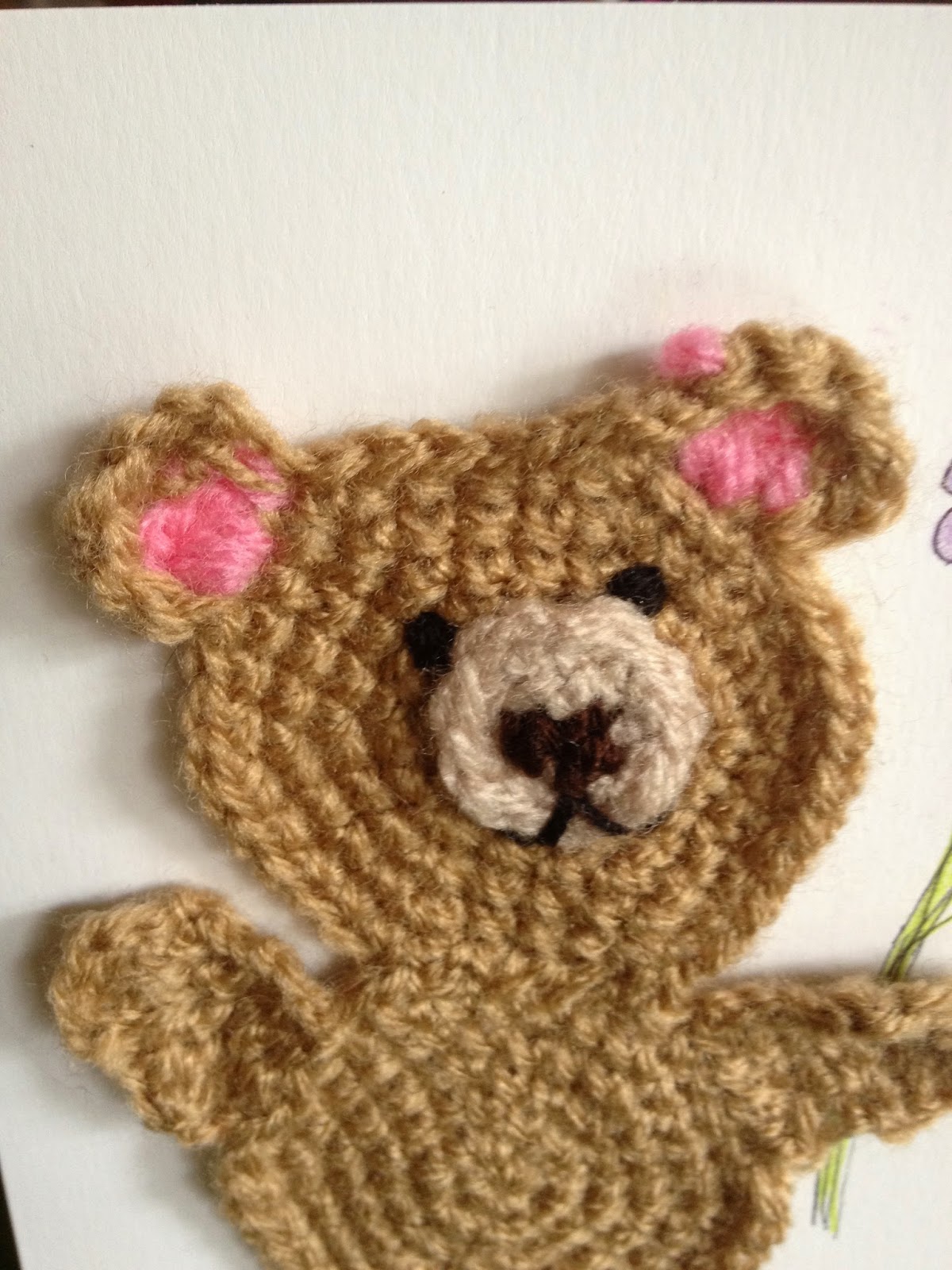 Strolling Bear-a flash of inspiration for my Mum's Mother's day card. She really liked it and my brother said it was 'the best card he had ever seen'! High praise indeed! I stuck him on with glue dots-the bear not my brother, but apparently he is starting to peel a bit now. He obviously wants to stroll. 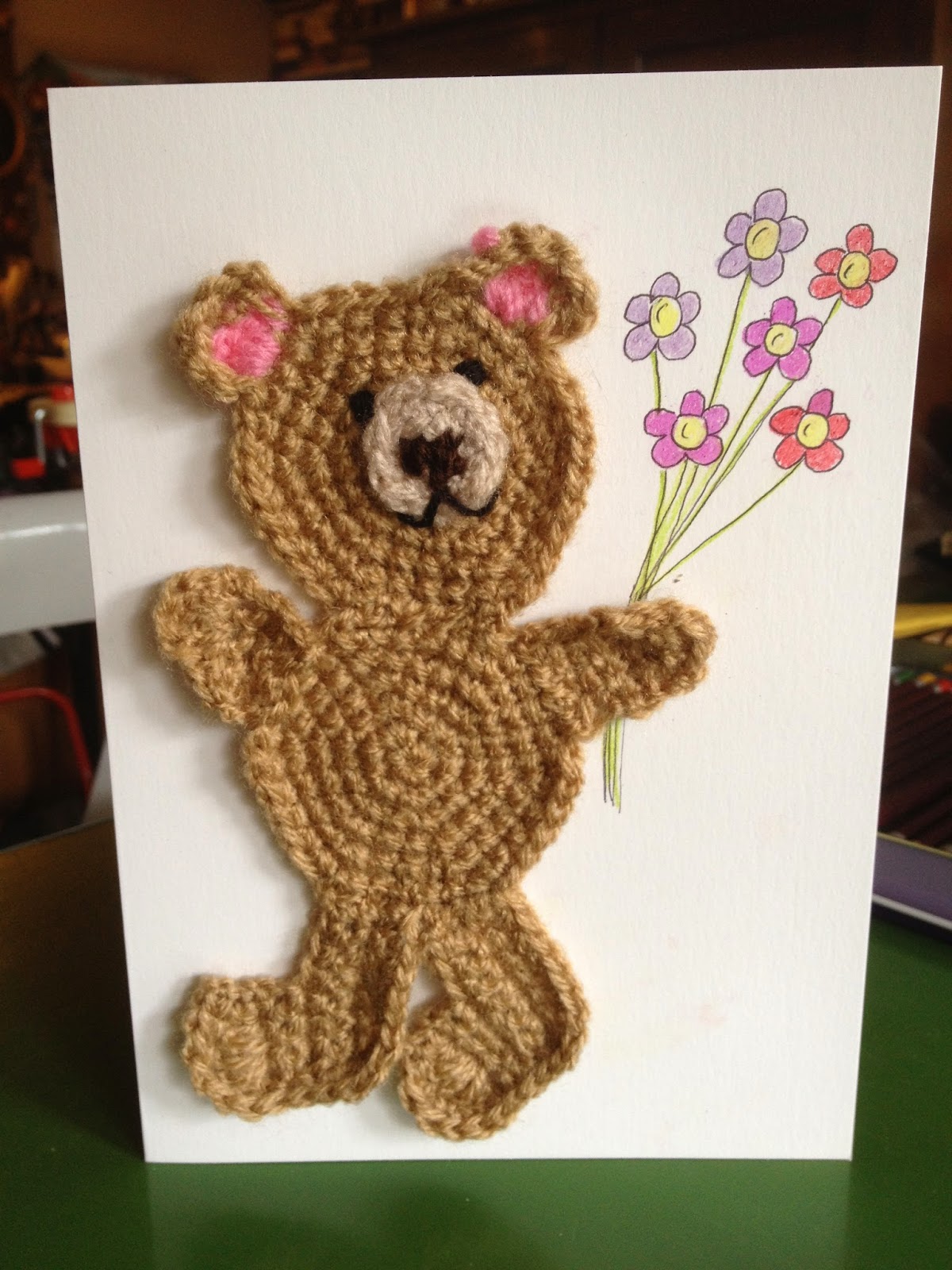 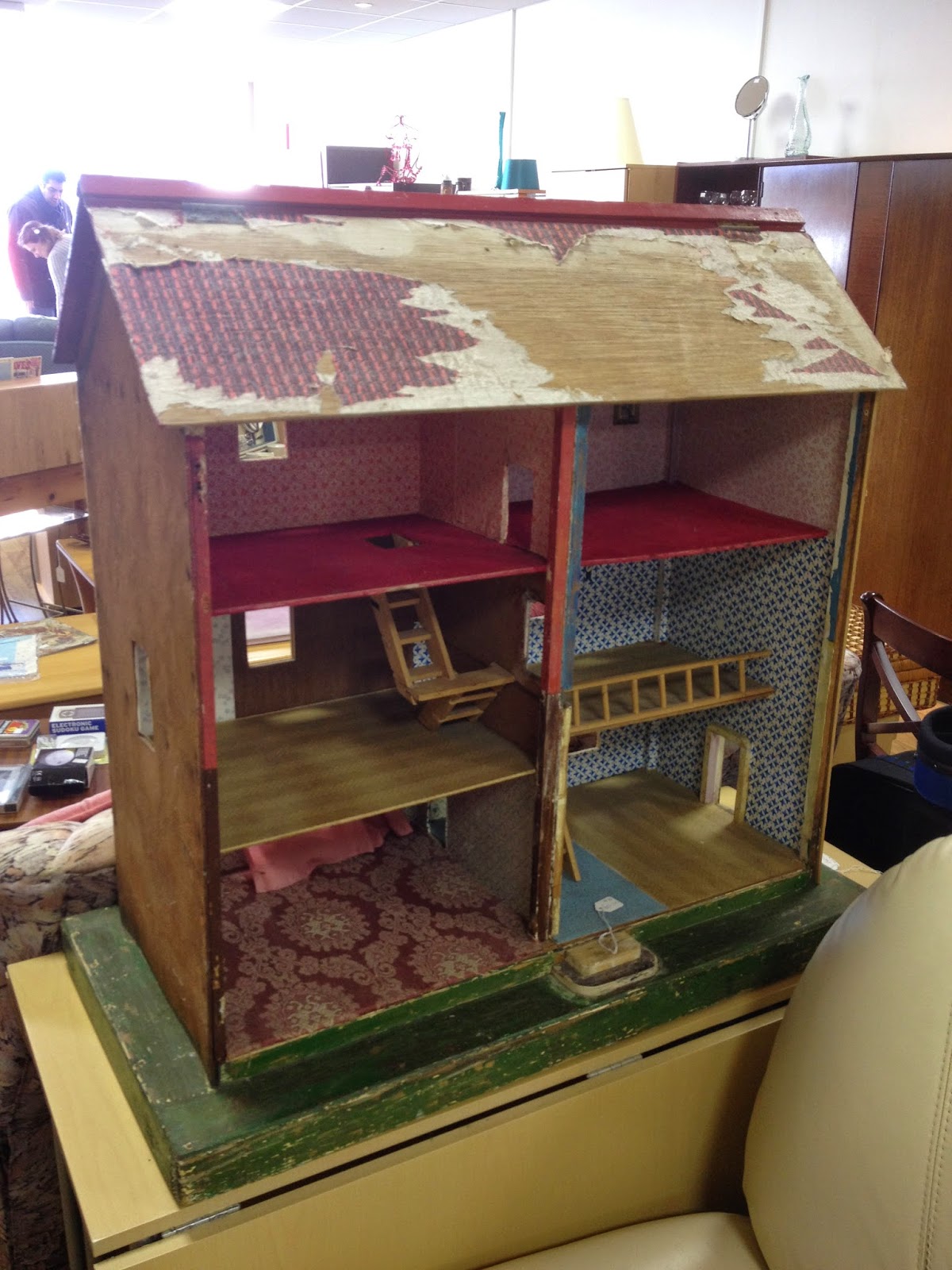 A massive dolls house in the charity shop on Saturday. I was tempted and it was only ten pounds, but common sense prevailed. There is literally nowhere it could go apart from the kitchen table and then we wouldn't have a table. Also the fact that I already have three dolls houses waiting for a makeover told me something! 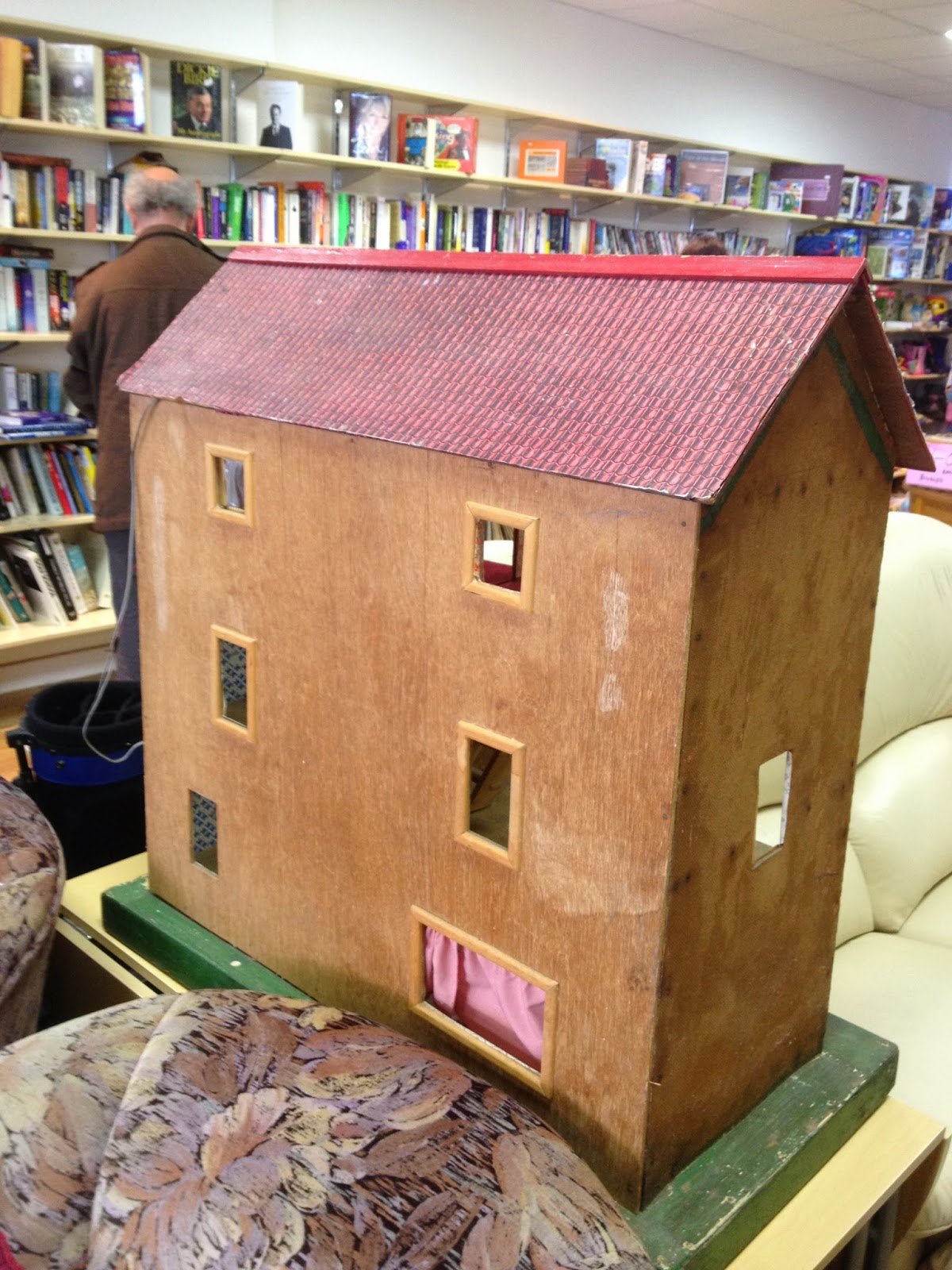 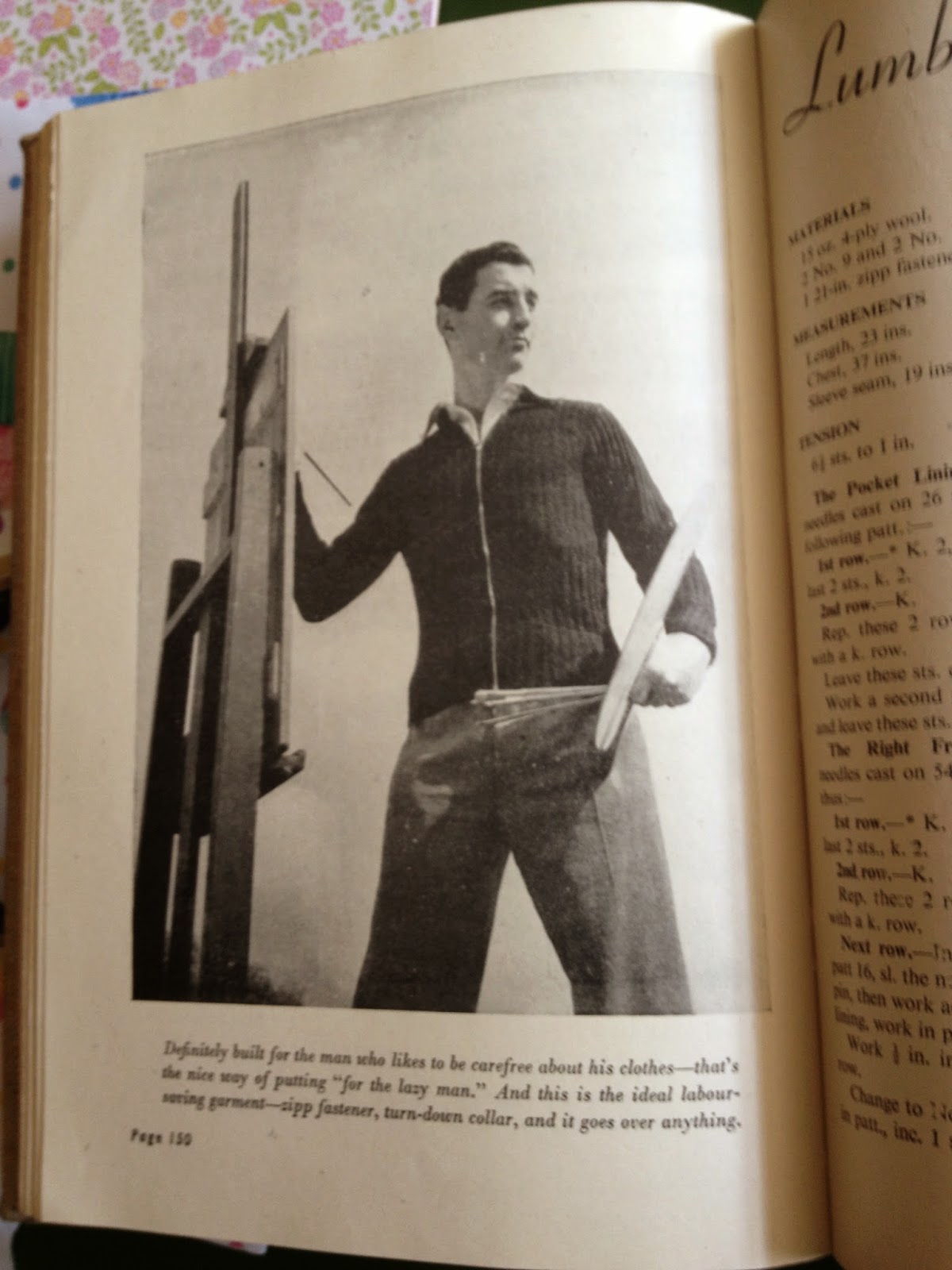 'Definitely built for the man who likes to be carefree about his clothes...that's the nice way of putting ''for the lazy man.'' And this is the ideal labour saving present-zip fastener, turn down collar, and it goes over anything'-I don't see this man as lazy-he is obviously an all action type, even when painting. This is from the old knitting book I gave my friend for her birthday. It is full of great pictures and funny descriptions evoking the lifestyle the knitted garments will open the door to. 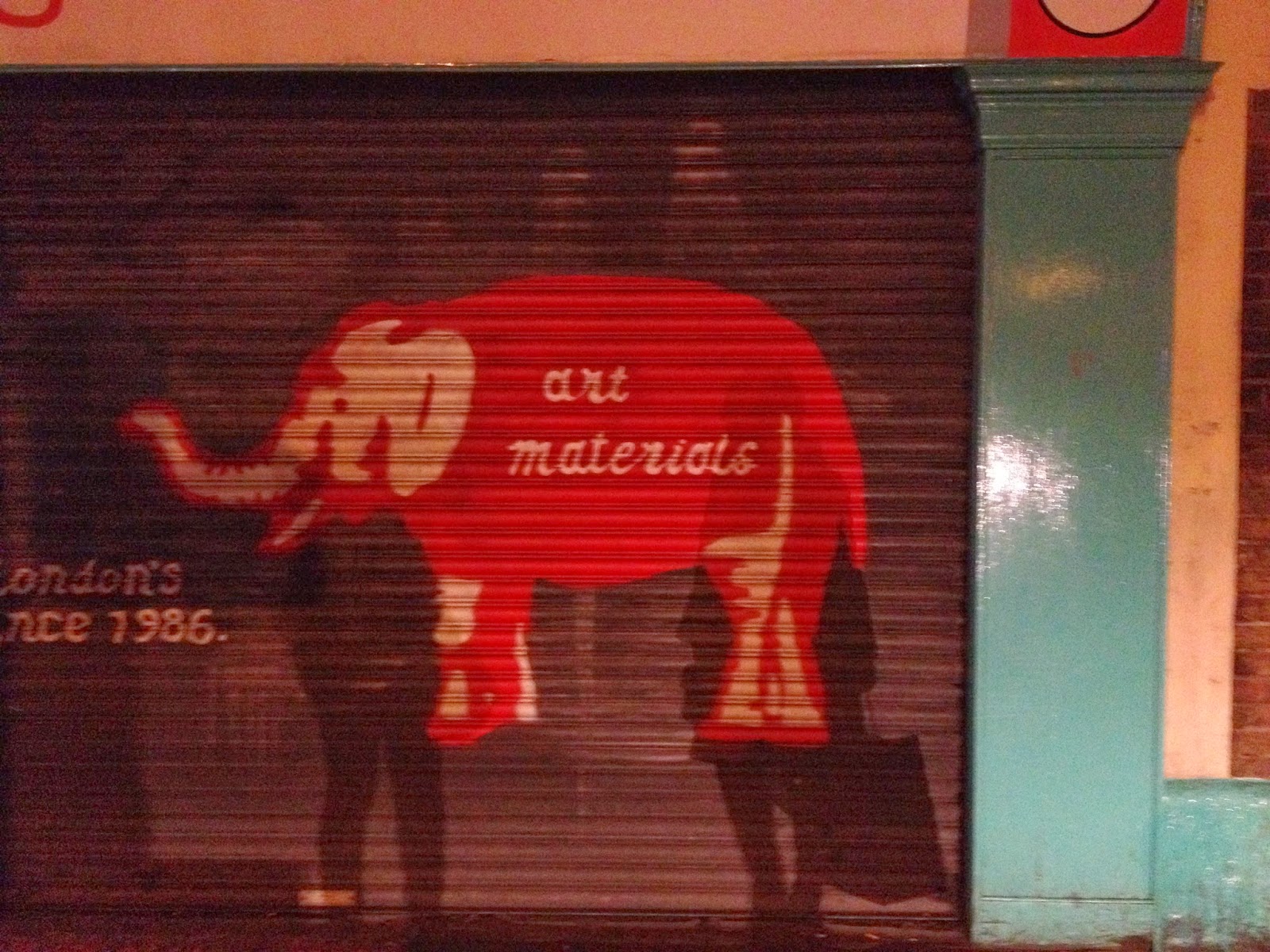 We went out on Saturday night for her birthday-to Hoxton, which was interesting. It was very busy and reminded me of being on holiday abroad. It was a warm and breezy evening which may have had something to do with that. I loved this elephant on the shutters. 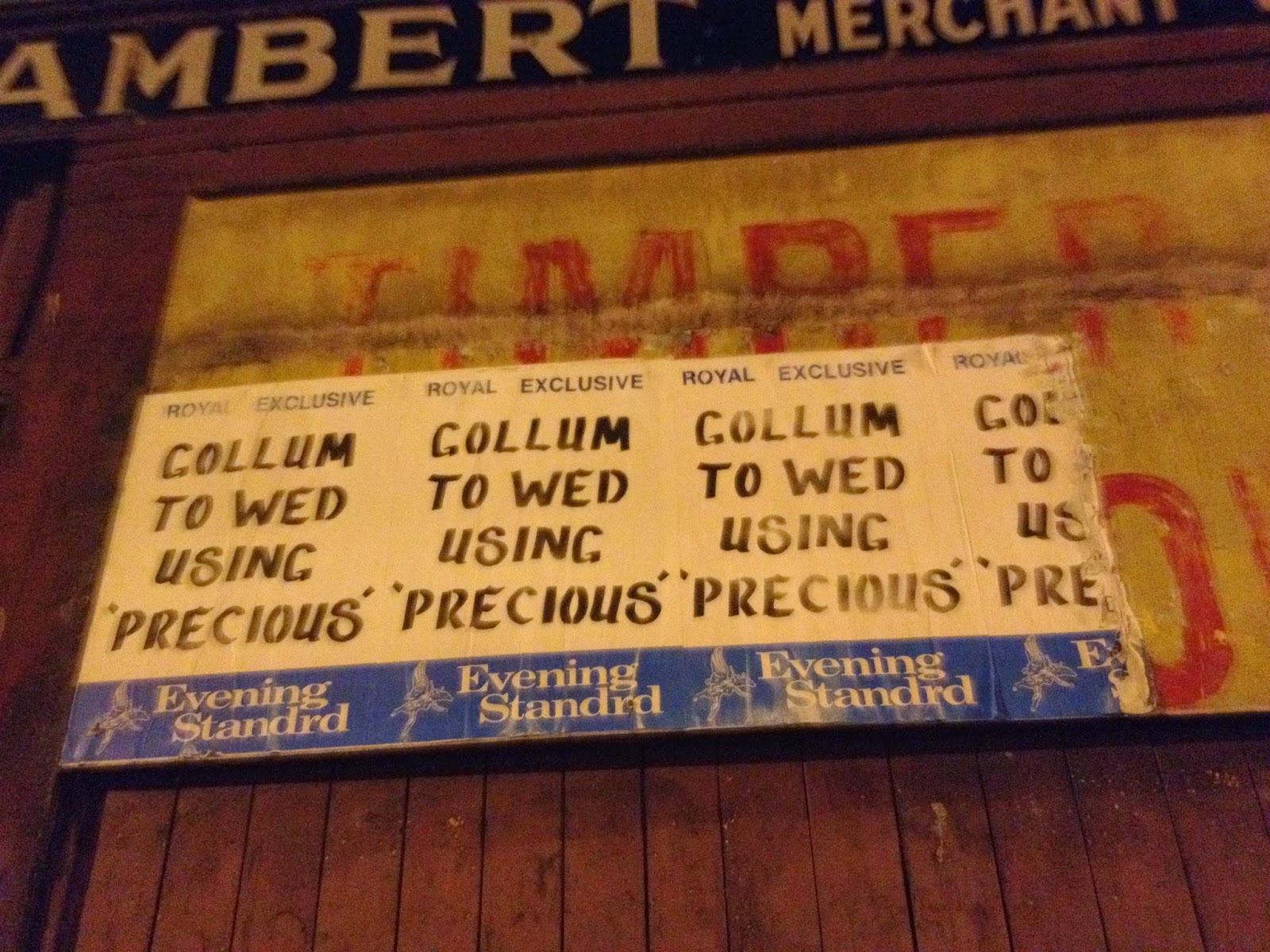 Interesting headline poster. Apparently it is street art. Here it is again. It did catch my eye as being strange! 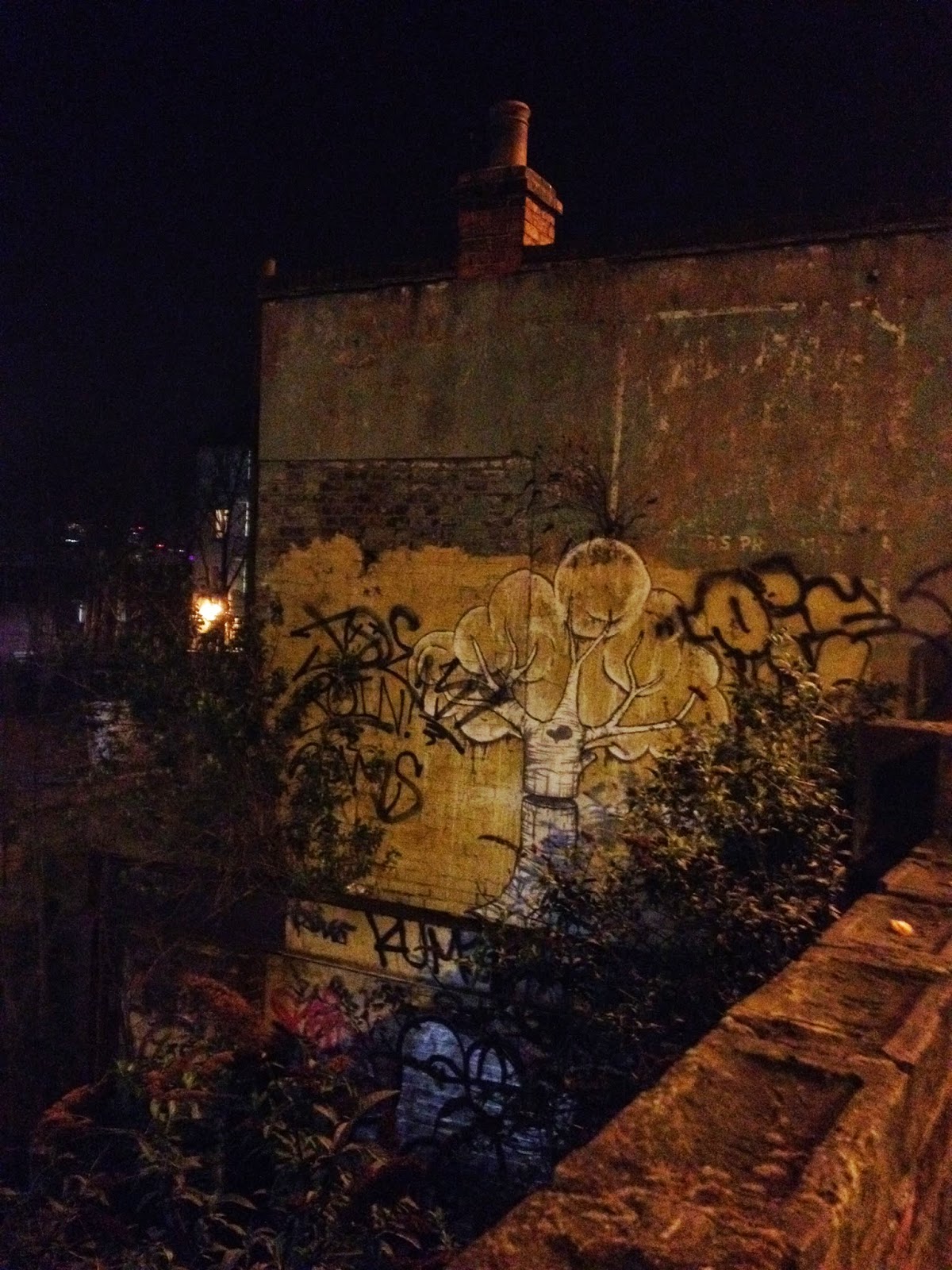 This tree graffiti is in New Cross-seen on the way home. 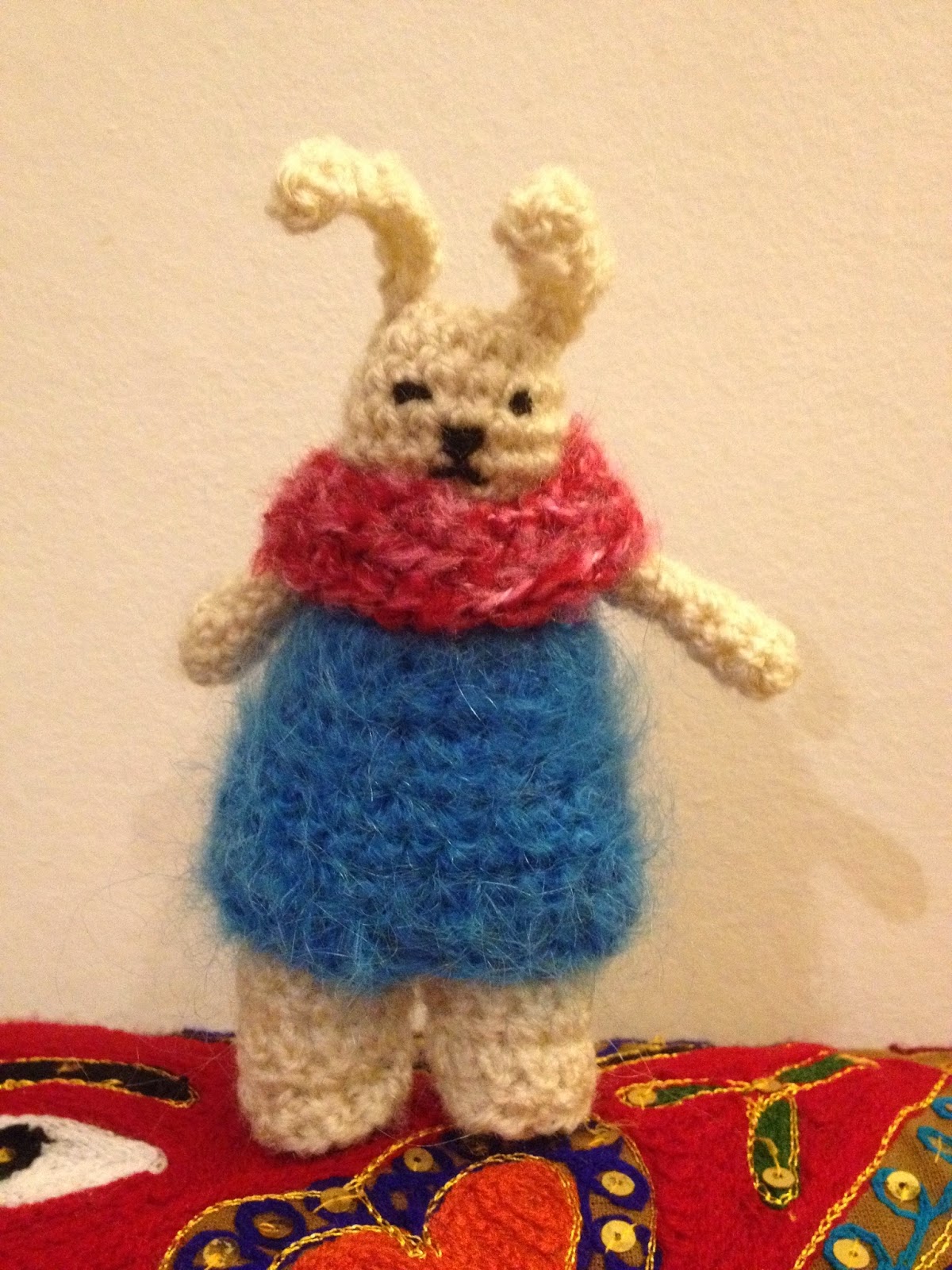 More bunnies are appearing-or at least more with clothes. I love the way this outfit turned out. She looks very cosy. 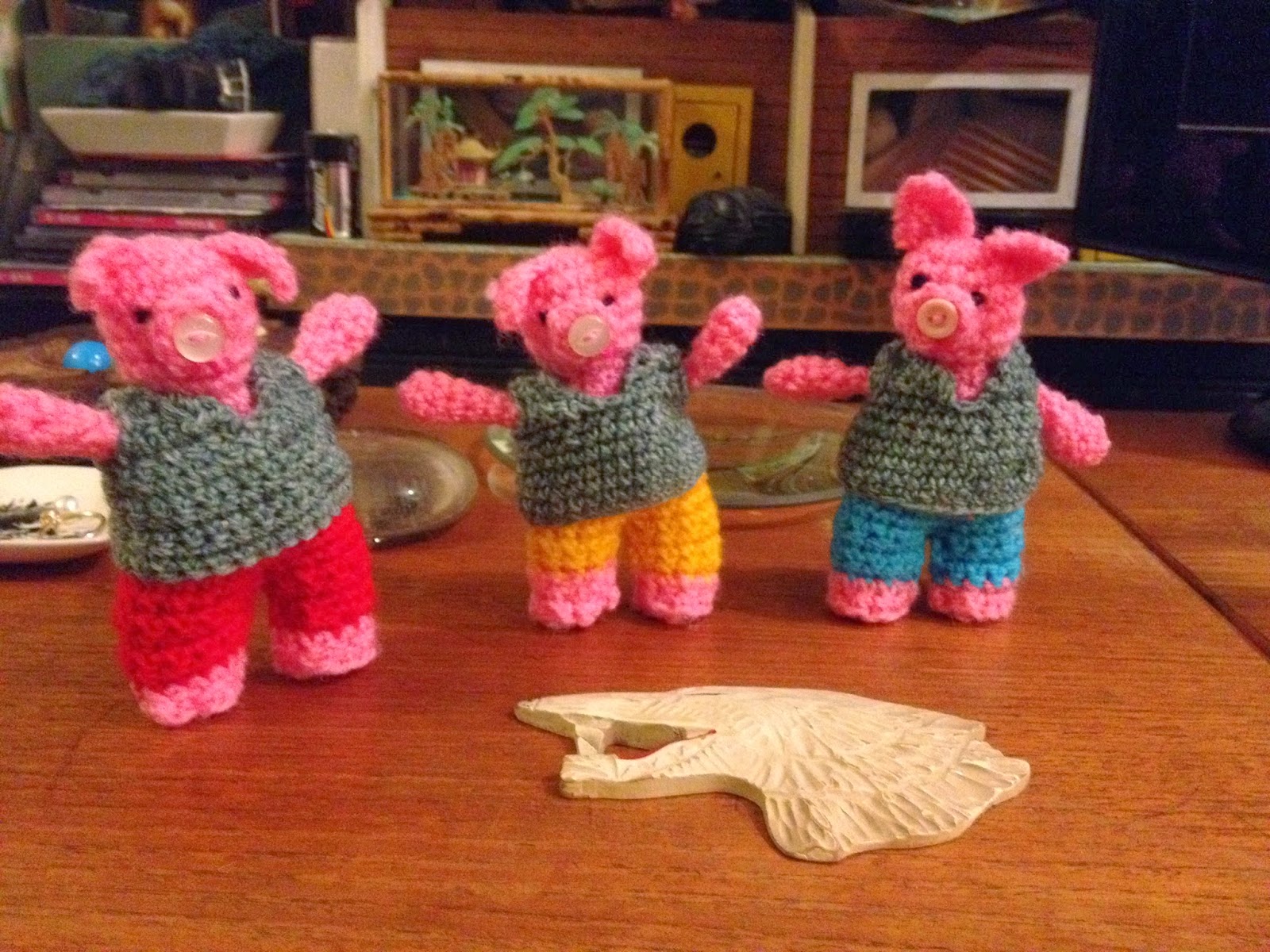 The three little pigs with their wolf trophy. They took me all day to make on Sunday, but were worth it as the kids love them. Lots of story telling going on again this week. 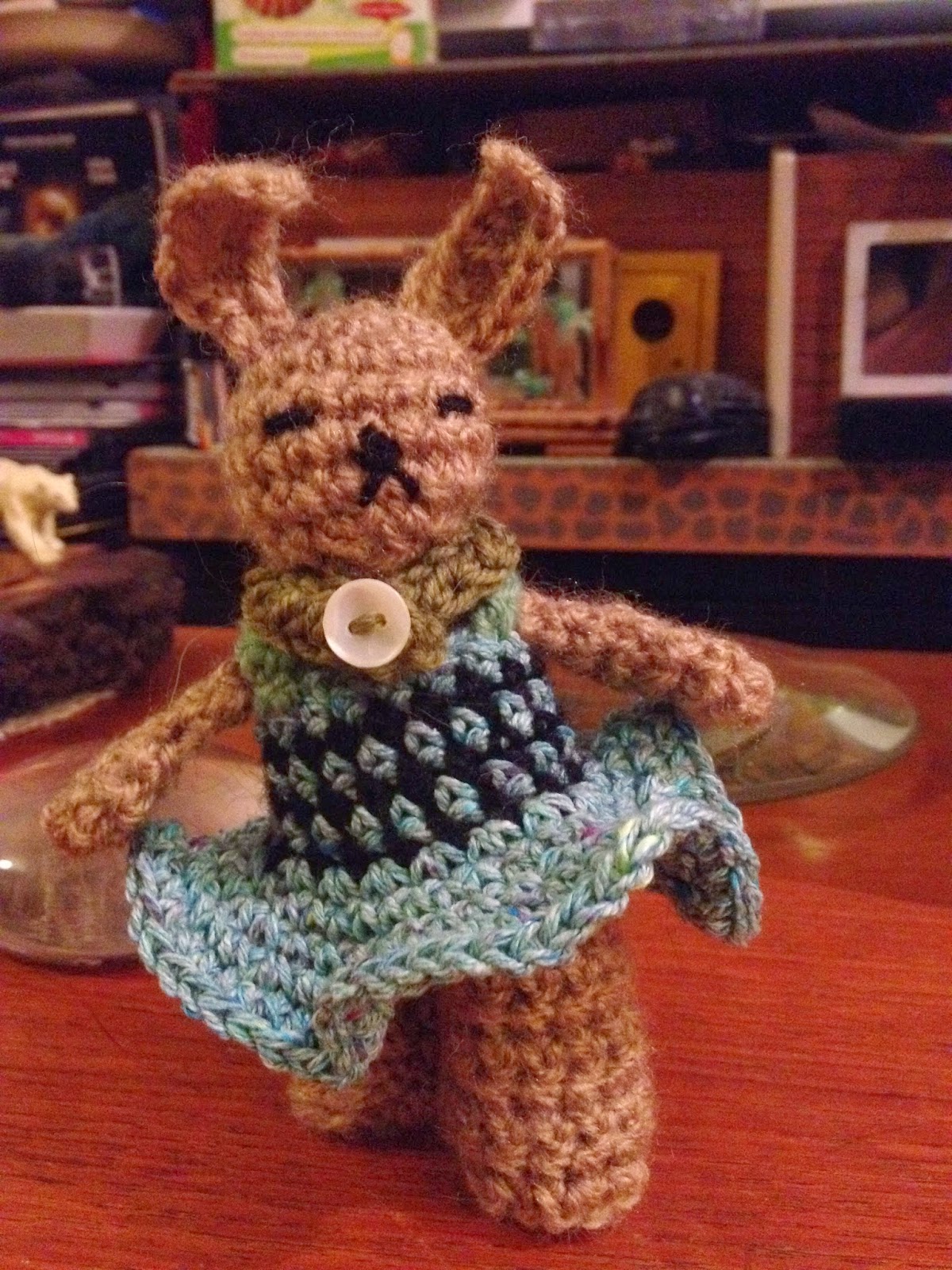 This is ballet bunny. I loved making the dress. For the skirt I increased in each stitch twice on two of the rounds and it had this great ballet dress effect. 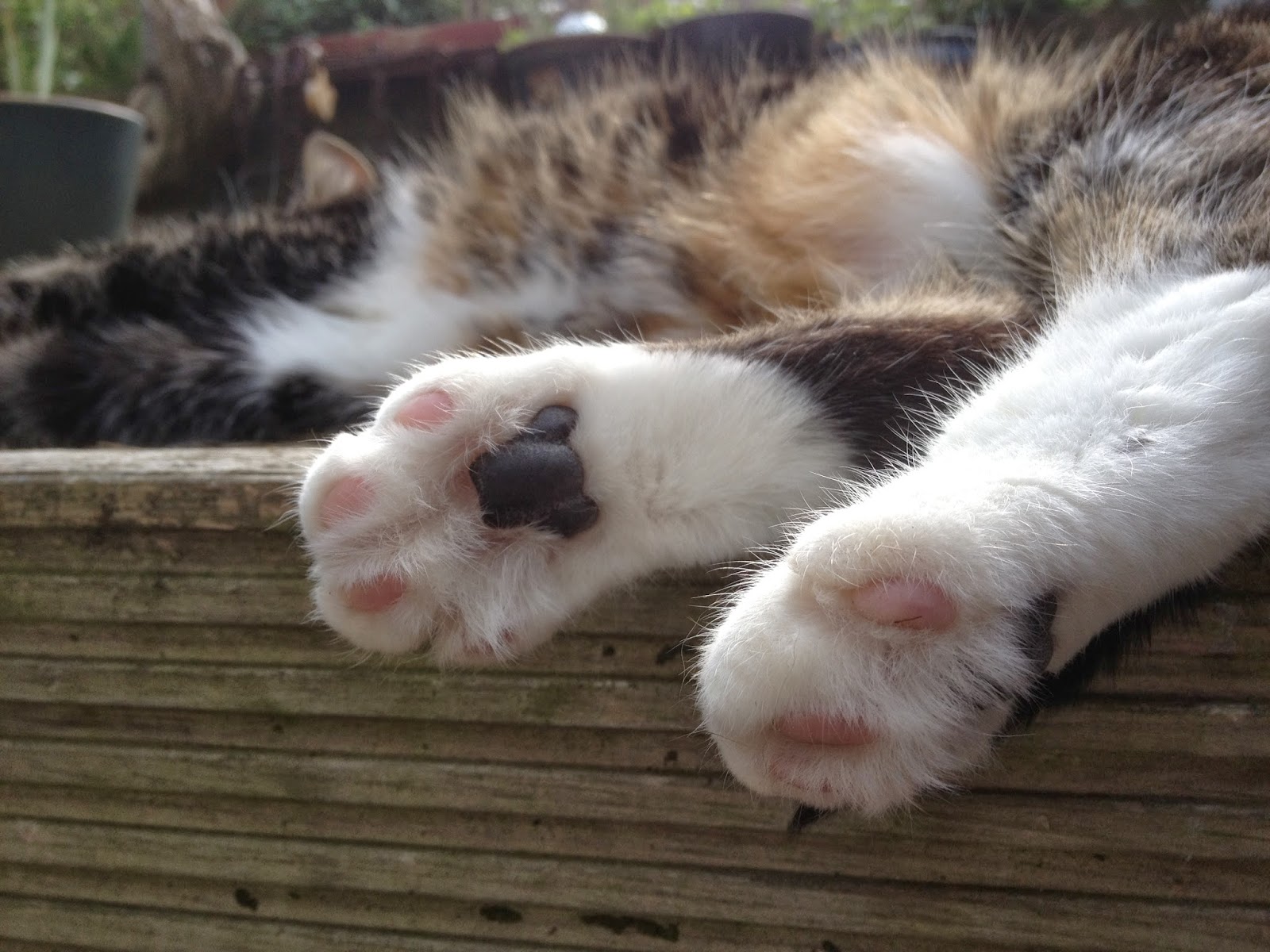 I worked at home this afternoon on assessment and tracking. The cats are shut in when we are not here at the moment, as we have a visitor who wees everywhere. They were happy to be let out and all flopped onto the decking in the sun. Cassie's paws are so huge and sweet I just had to take a picture. The black pad in the middle of her foot looks like a bear. 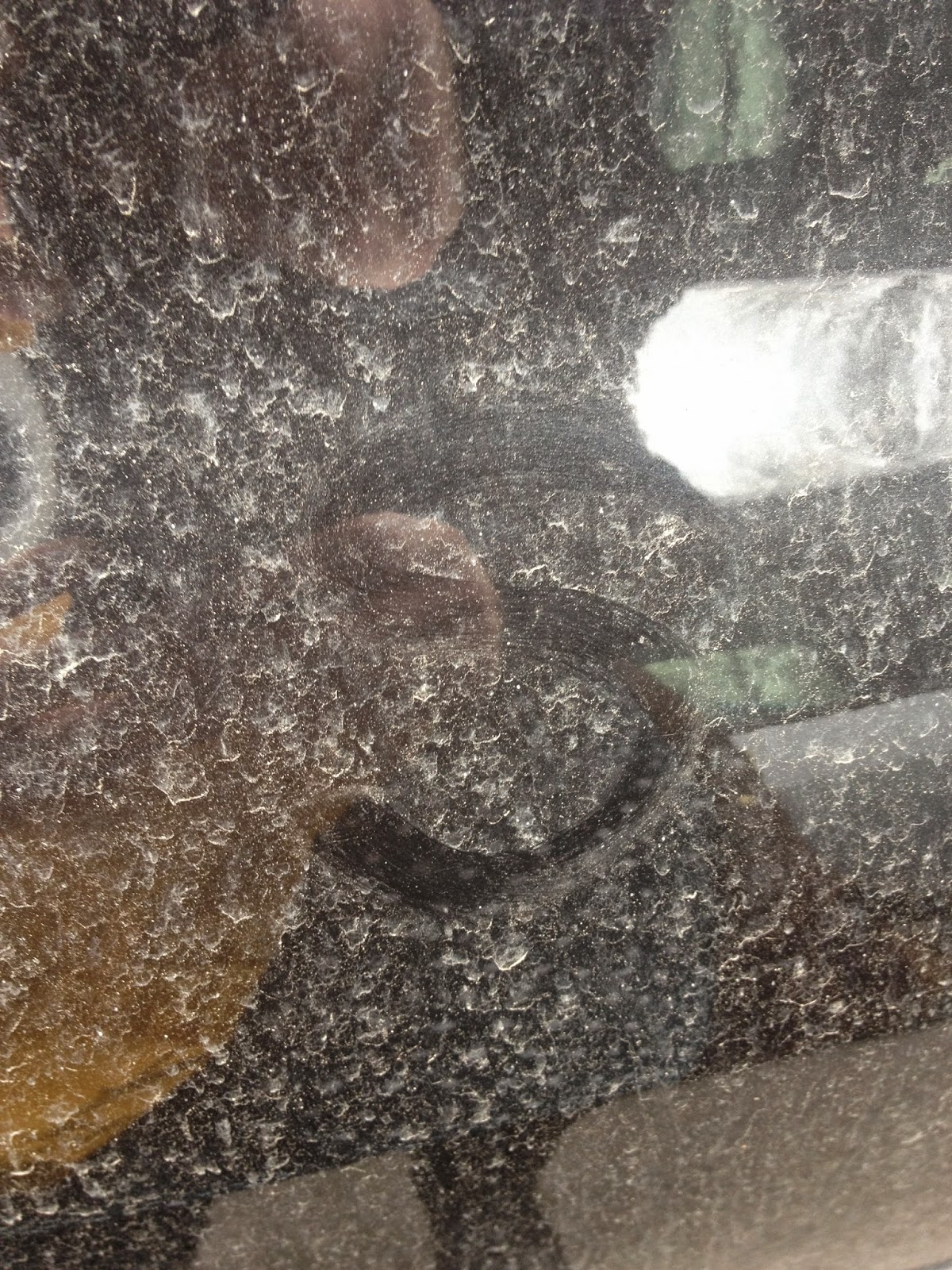 S for Sahara-or Saharan dust anyway. All over all the cars and everything else too. Unlike the volcanic dust which is abrasive and sparkly, this is yellowy and, well, dusty. No point washing the car till it stops. 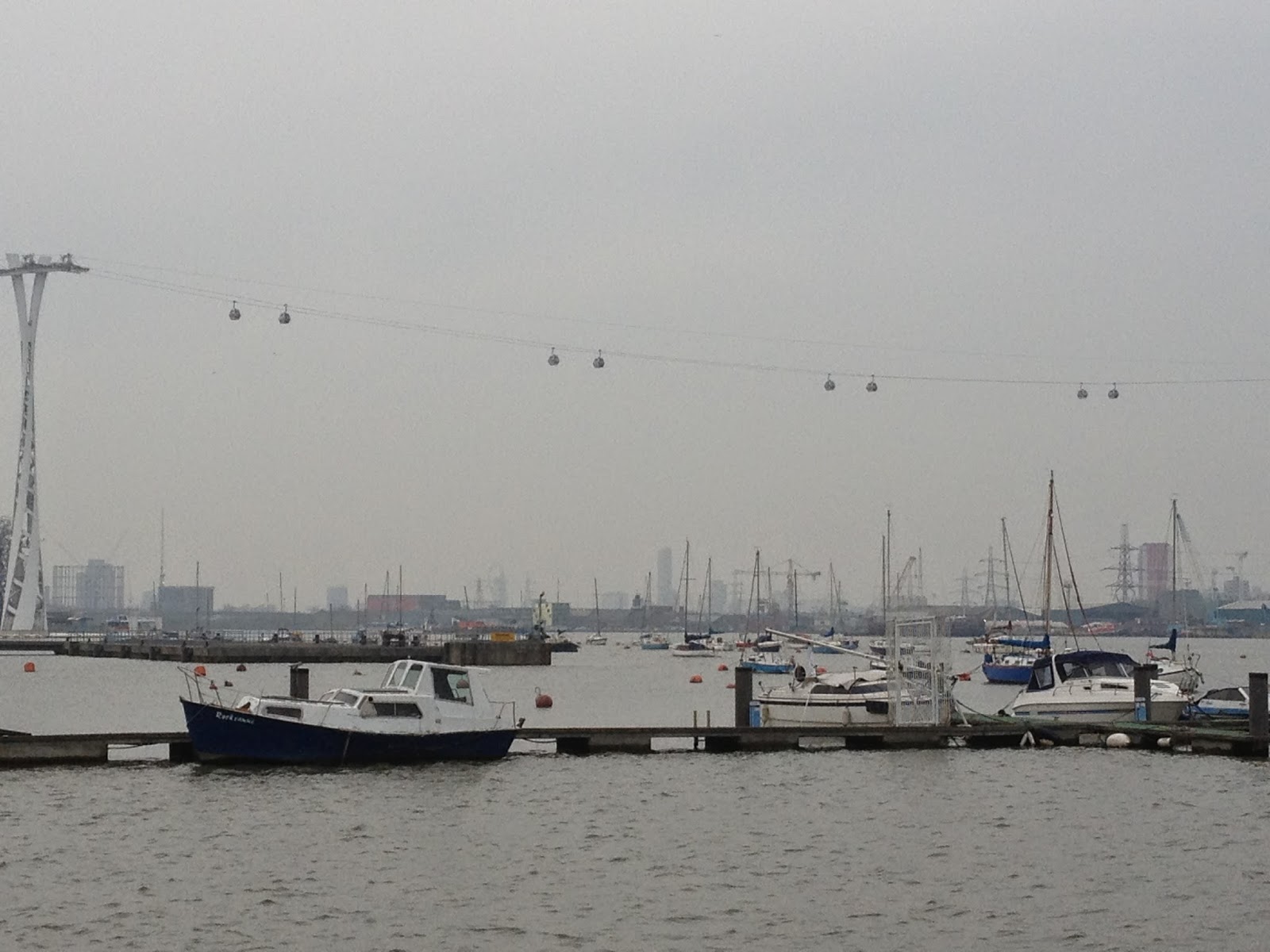 I popped down to the river tonight to look for haze from the dust. It does look quite hazy. 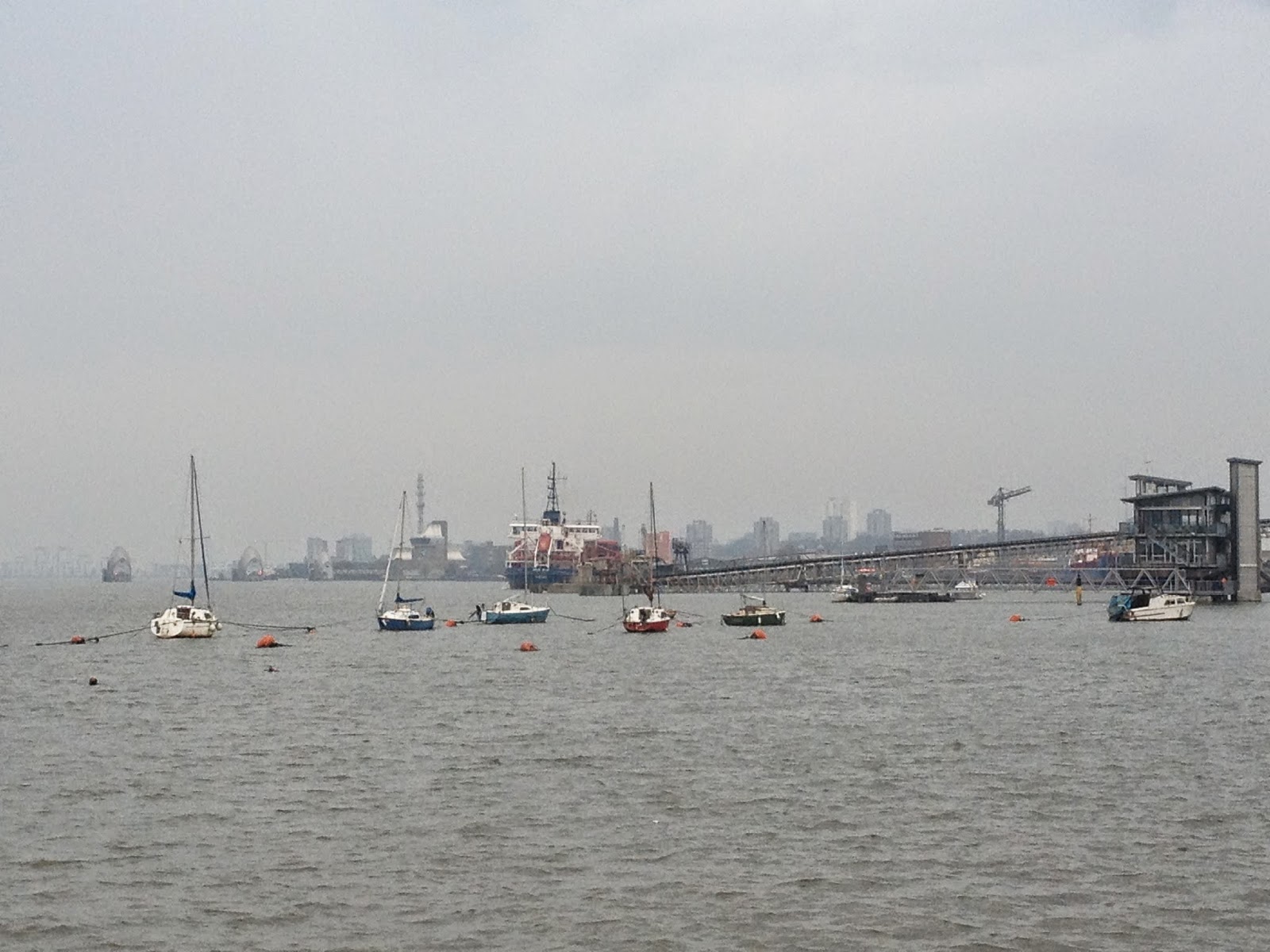 In other news, after continuing work problems -my personal ones being that now I have had two observations where I have been judged as 'requiring improvement' (despite the person who wrote the feedback not actually watching my teaching-and turning up late-very late, for the second observation without apology or explanation) so although I have taken on board the continuing comments about my classroom organisation-which I have changed again, I object to the ones that said the activities I give the children are 'not challenging enough' when the person observing has little knowledge of them (or of me)-having only come at the end of a very busy Friday afternoon. Also, after those two damning reports, she is now leaving, halfway through the year, as she is finding it hard to cope. Great! Anyway, all that aside, all the events since the dreadful ofsted before Christmas have led to our current headteacher leaving at the end of this week due to ill health, and our imminent takeover by another head who is drafted in to sort out failing schools. I suppose all we can do is see how it is, try to do what is required, and try to survive. Although I really would like to leave, there are things that stop me, lots of things, and some of the time I really want to stay. I work with lovely colleagues, have a great relationship with parents and children and really enjoy the teaching of this age group. We shall see.
Posted by Sarah at 15:53

A fine menagerie of needlework creatures! I want the doll house. But I have the same problem of having a place to put it. I understand the dust blowing in from some distant place and then smeared and spread by wet weather. If it shows up here following a snow storm we call it "snirt."