We went to see Andy's Mum this weekend. It was lovely to see her, even though briefly. We did a lot of wandering around which was fun. Having just spent about ten minutes looking at Google Maps, I now know roughly the area she lives in. It is south of the City Centre and is called Church Hill. It is close to Morningside which is a very well to do place. There are lots of beautiful Georgian houses and I was spoilt for choice in architectural details to look at. A magical giant metal strawberry plant first. 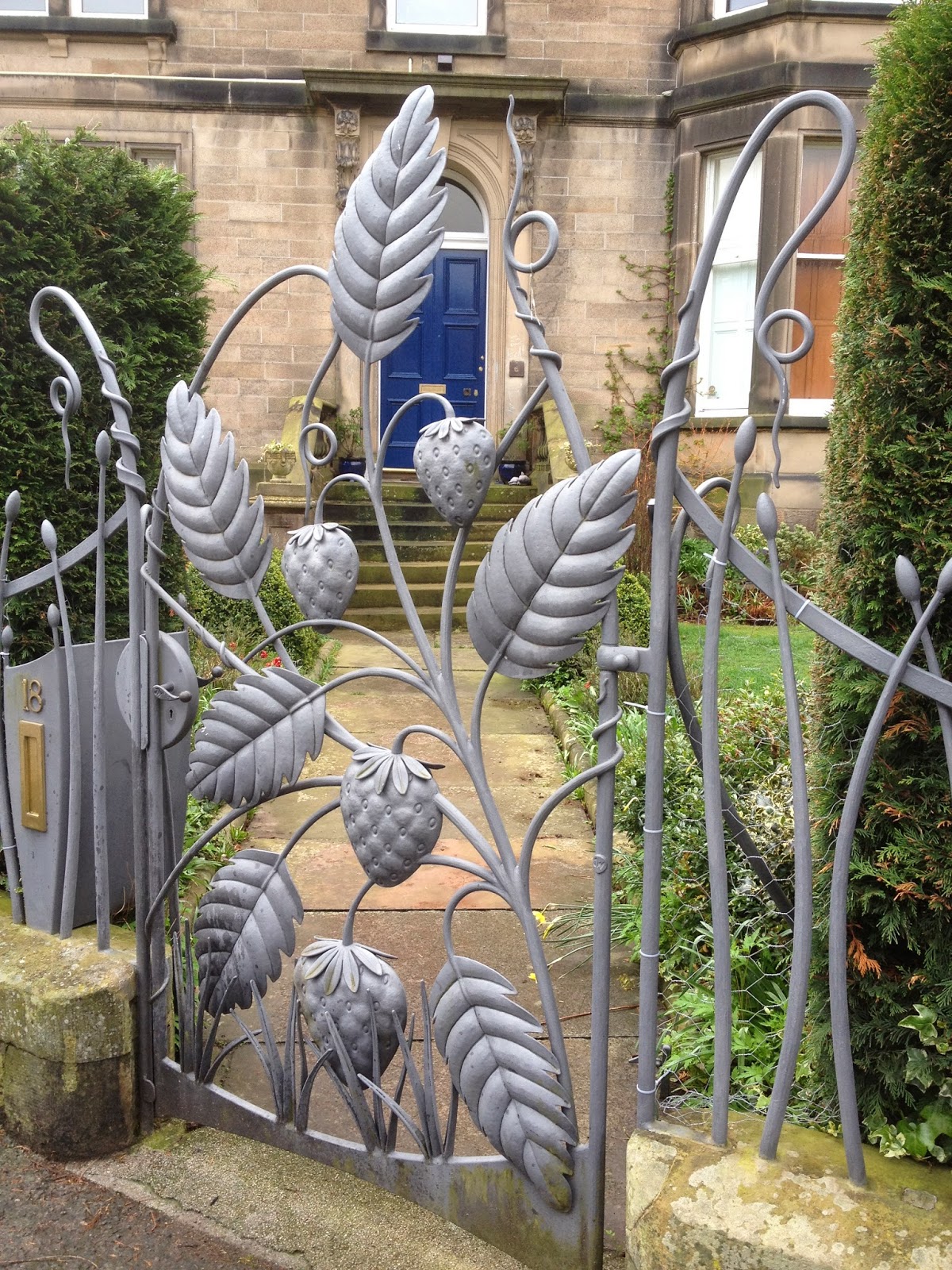 Andy pointed out this house because of the window in the middle. You can't really tell in the photo but it is huge. It has what looks like a laburnam tree growing behind it. 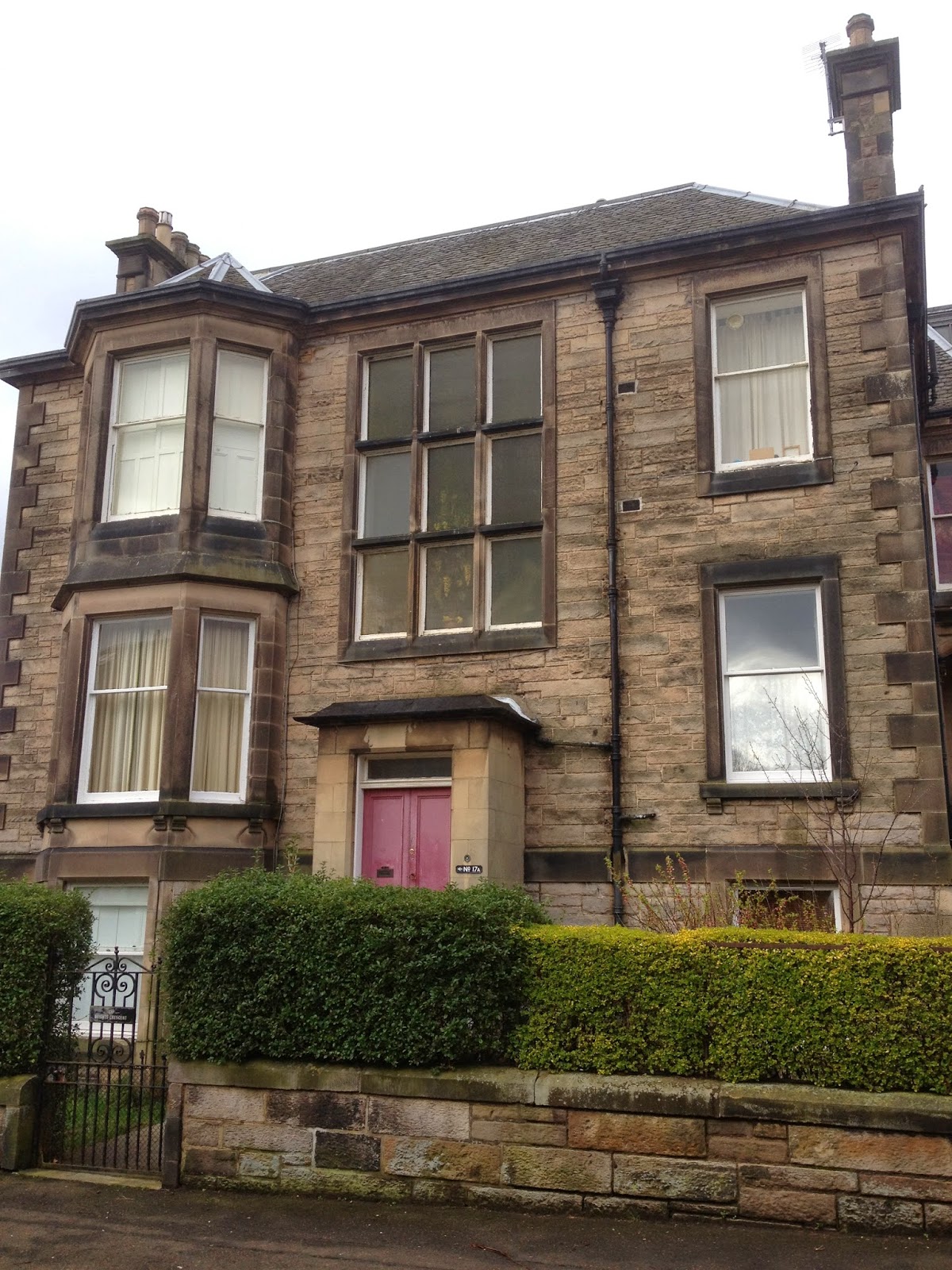 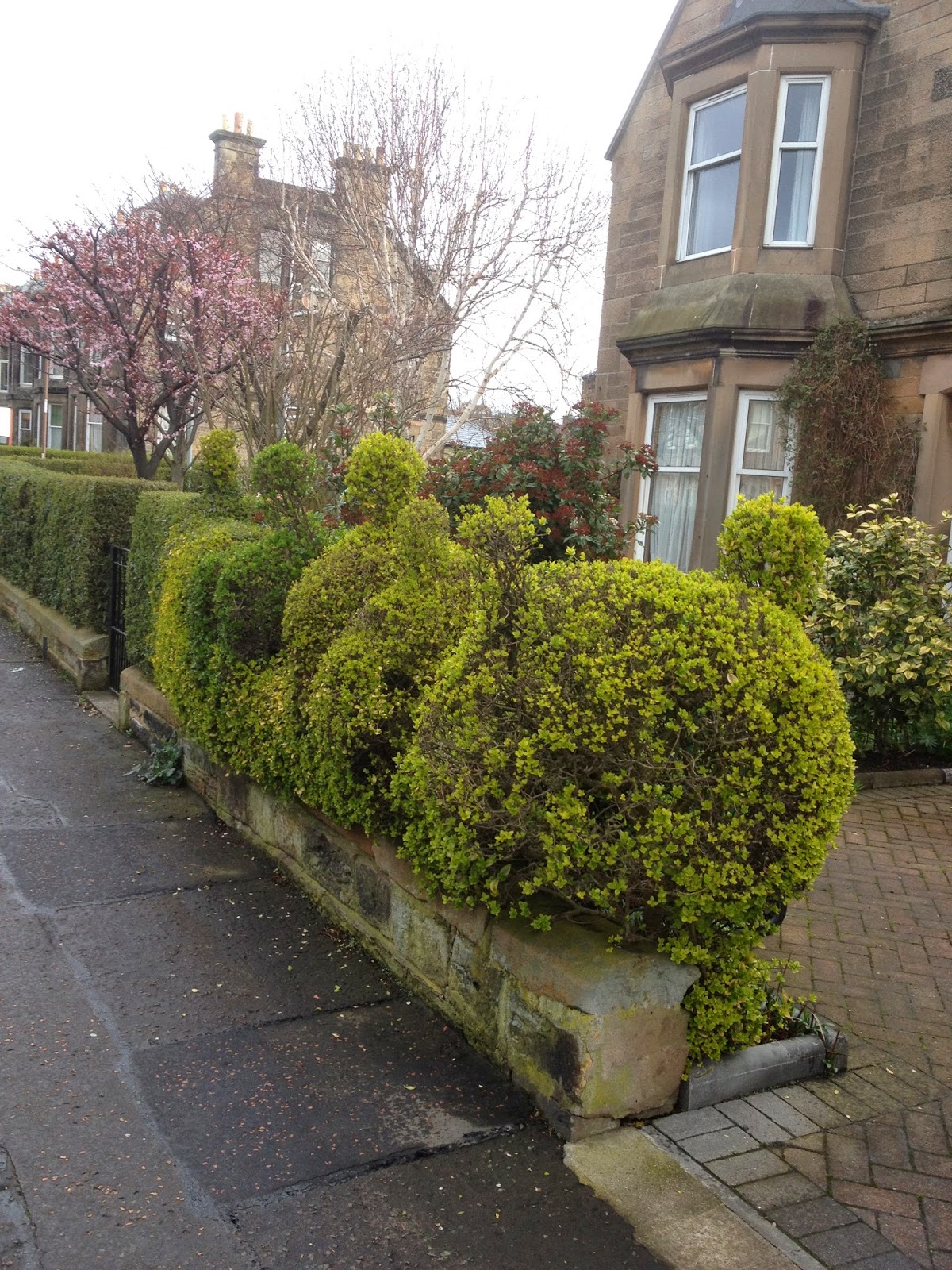 I love the star detail on these drain pipes. 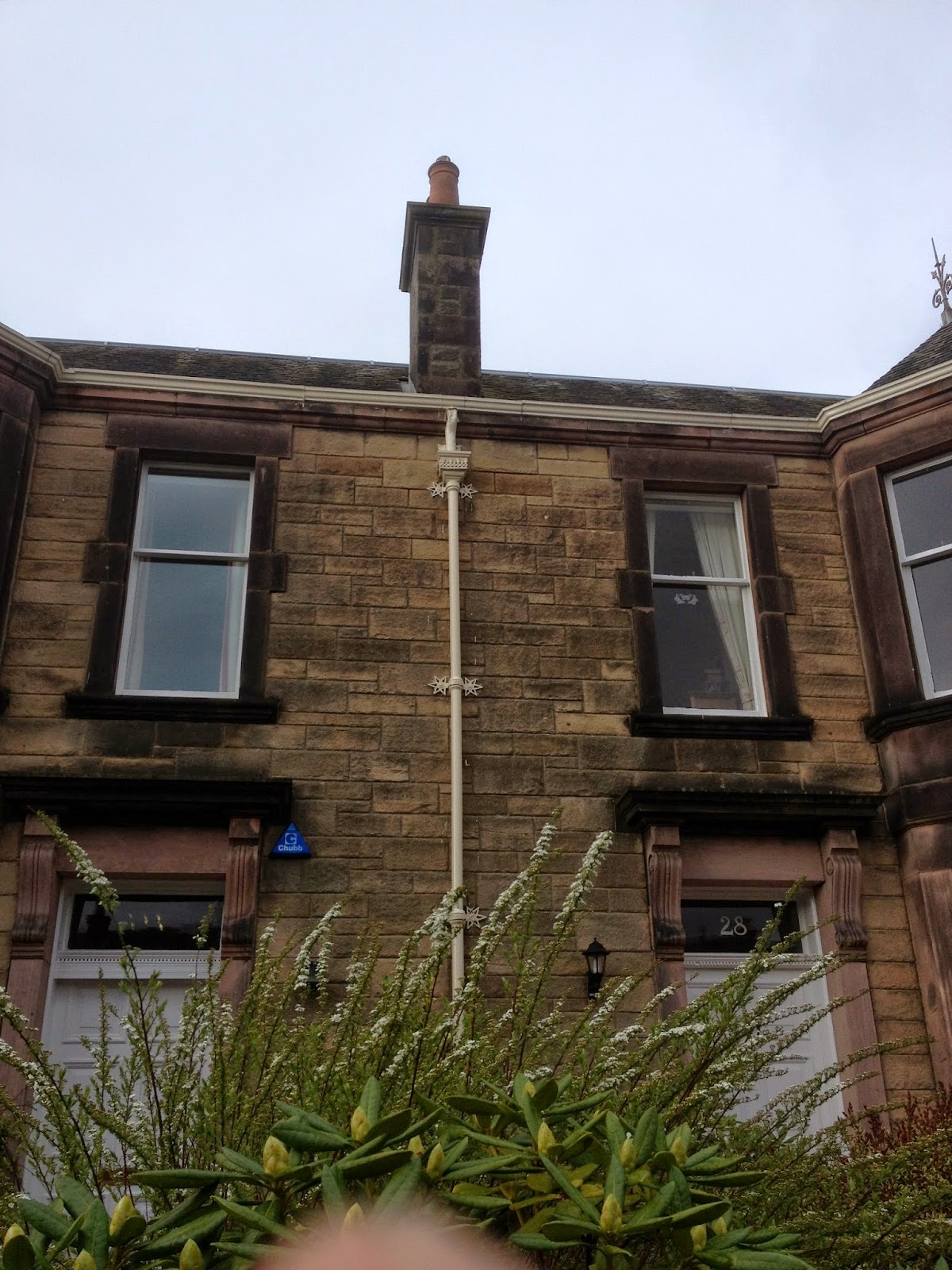 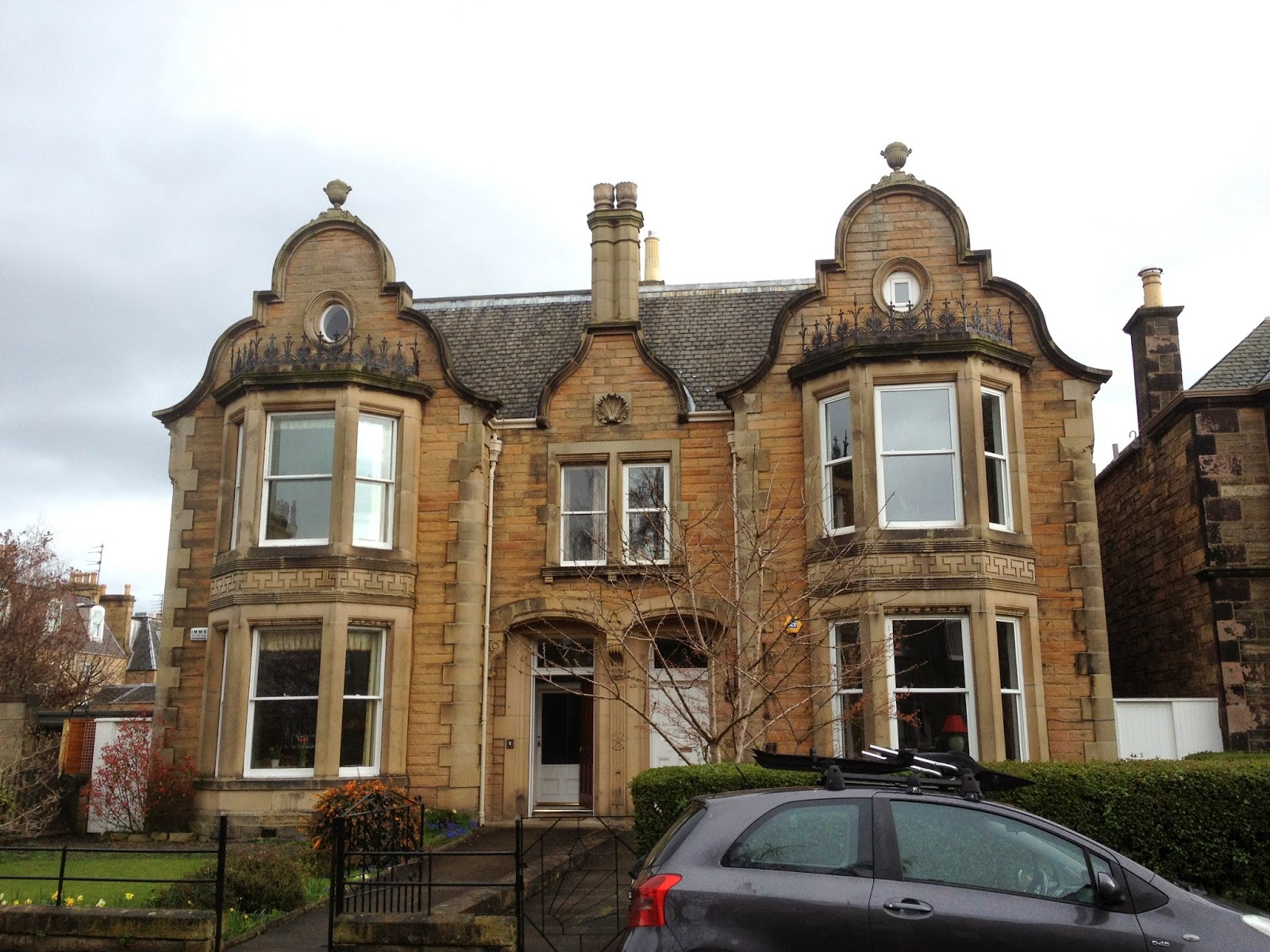 Andy's Mum took us to the Canny Mans pub in Morningside for lunch. They serve a massive choice of open sandwiches. We all had some variety of salmon or prawns and they were very tasty. The pub is crammed full of an eccentric collection of things including lots of taxidermy, a bicycle, a pram and a full sized mannequin suspended from various points on the ceiling, and lots of Victorian china. It was a fun place to go. 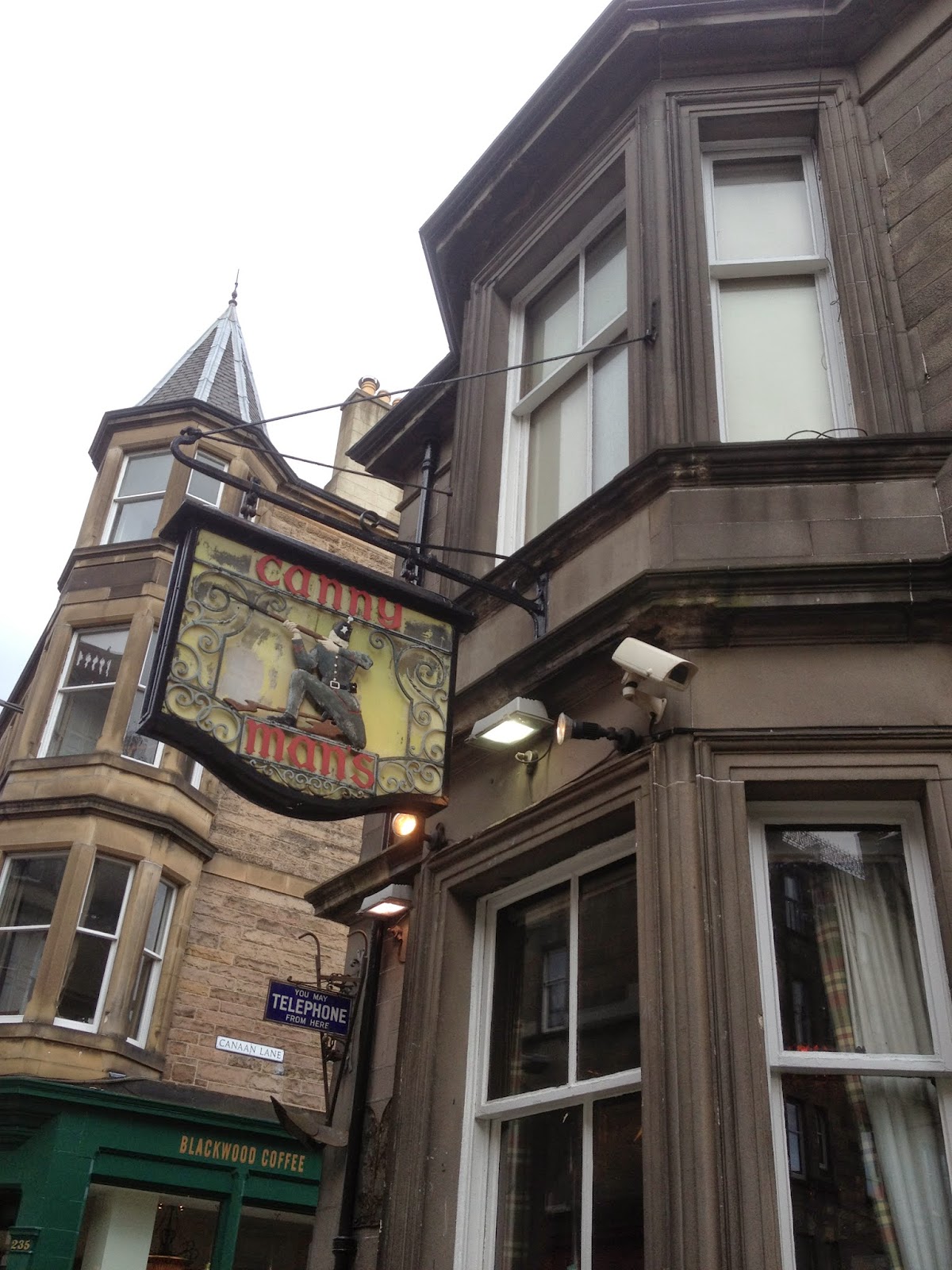 This cinema is a bit different to the rest of the buildings in the area. 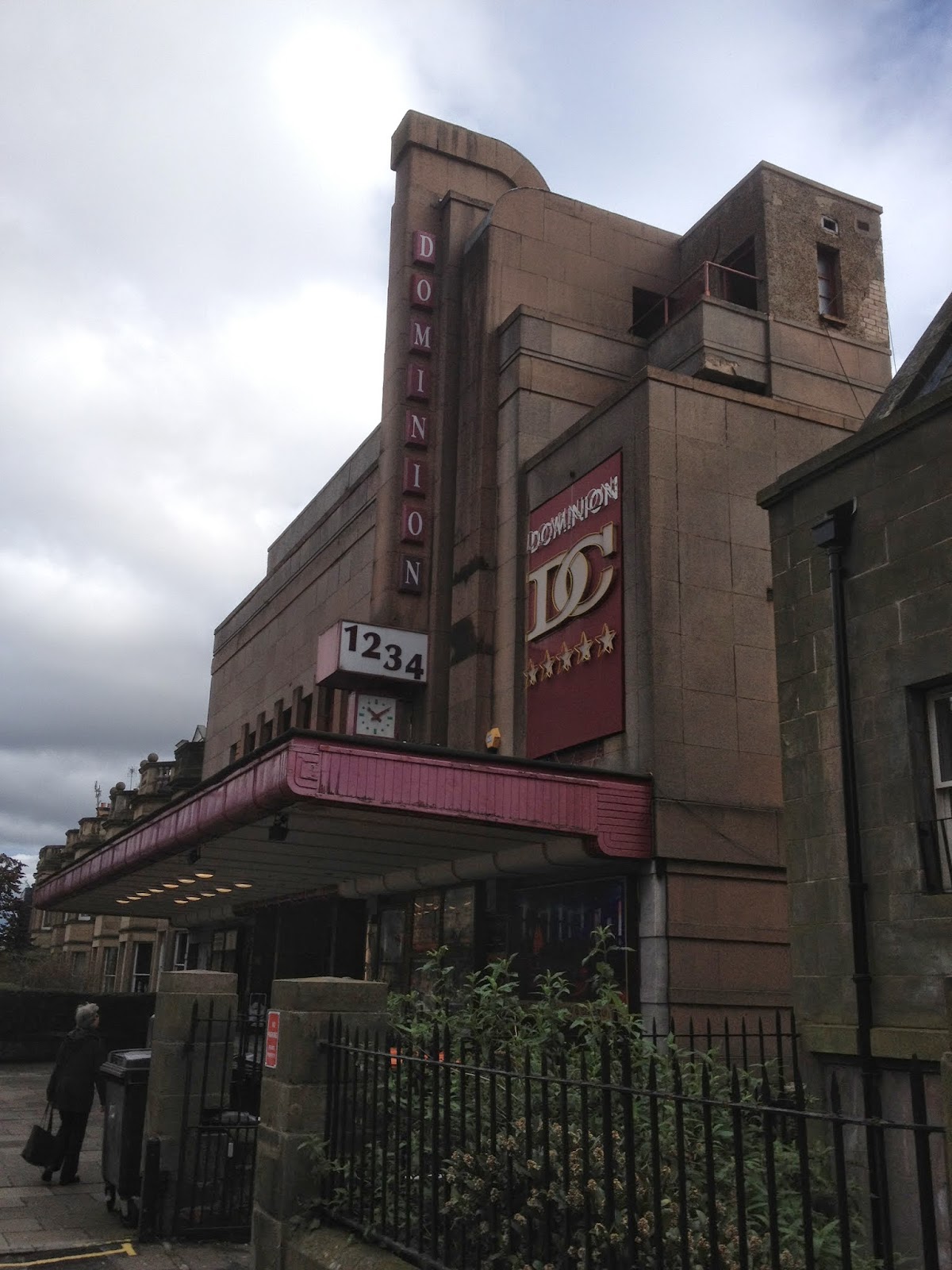 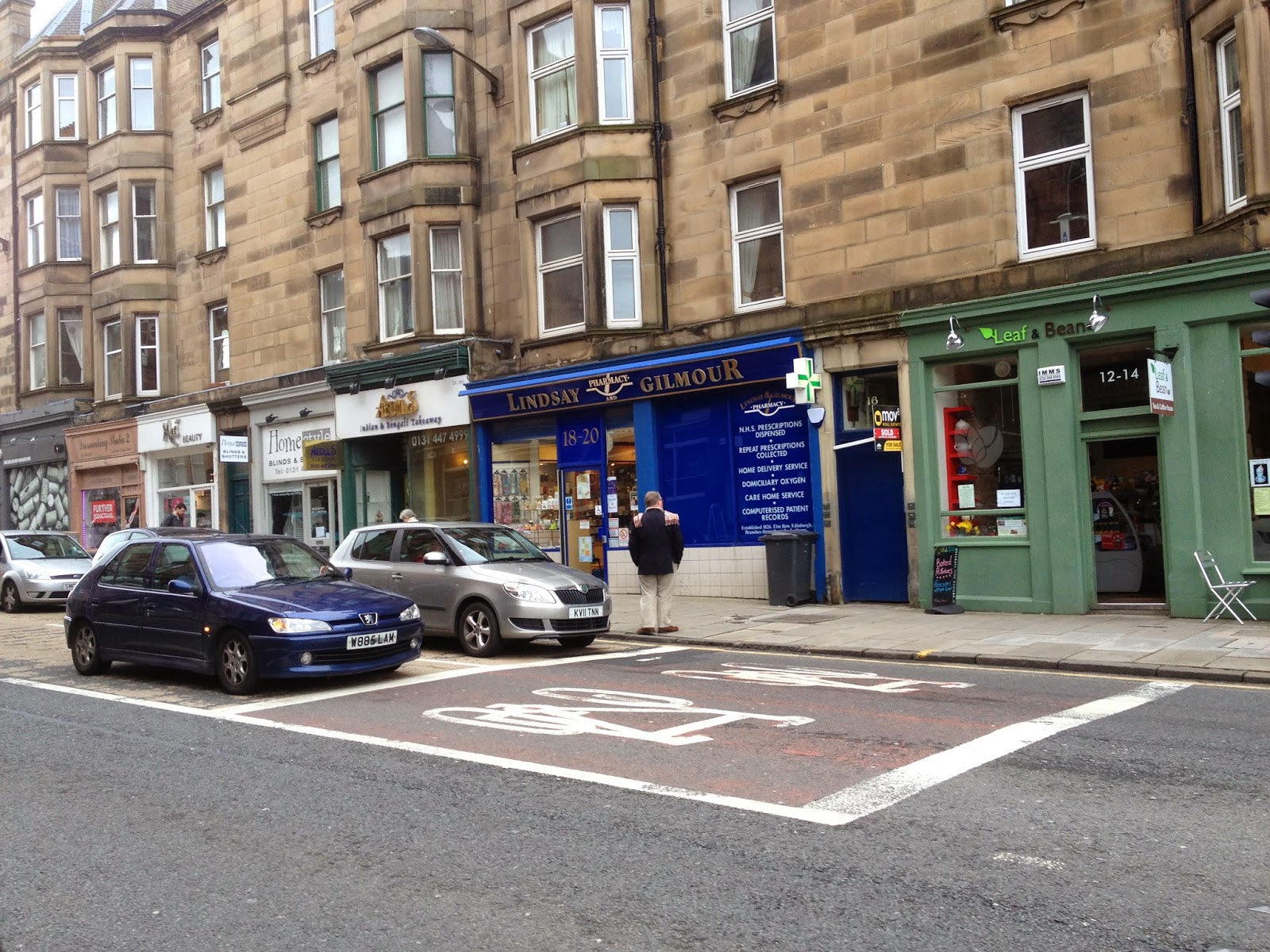 Philip Serrell (above) and James Braxton of the Antiques Road Trip programme-spotted in Morningside! 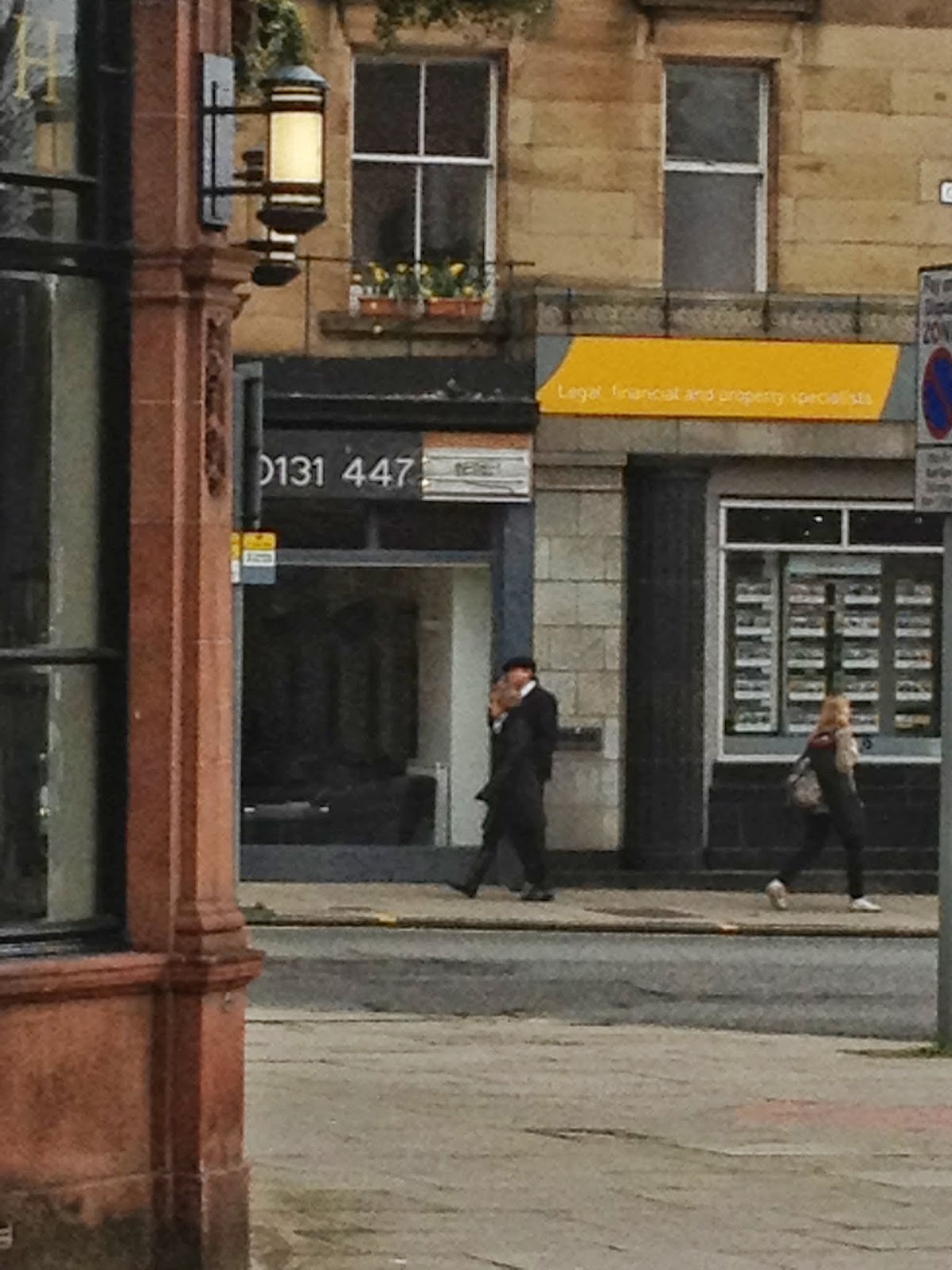 Part of the university buildings. It is, or was the zoology department and had all sorts of amazing animal reliefs on the outside. 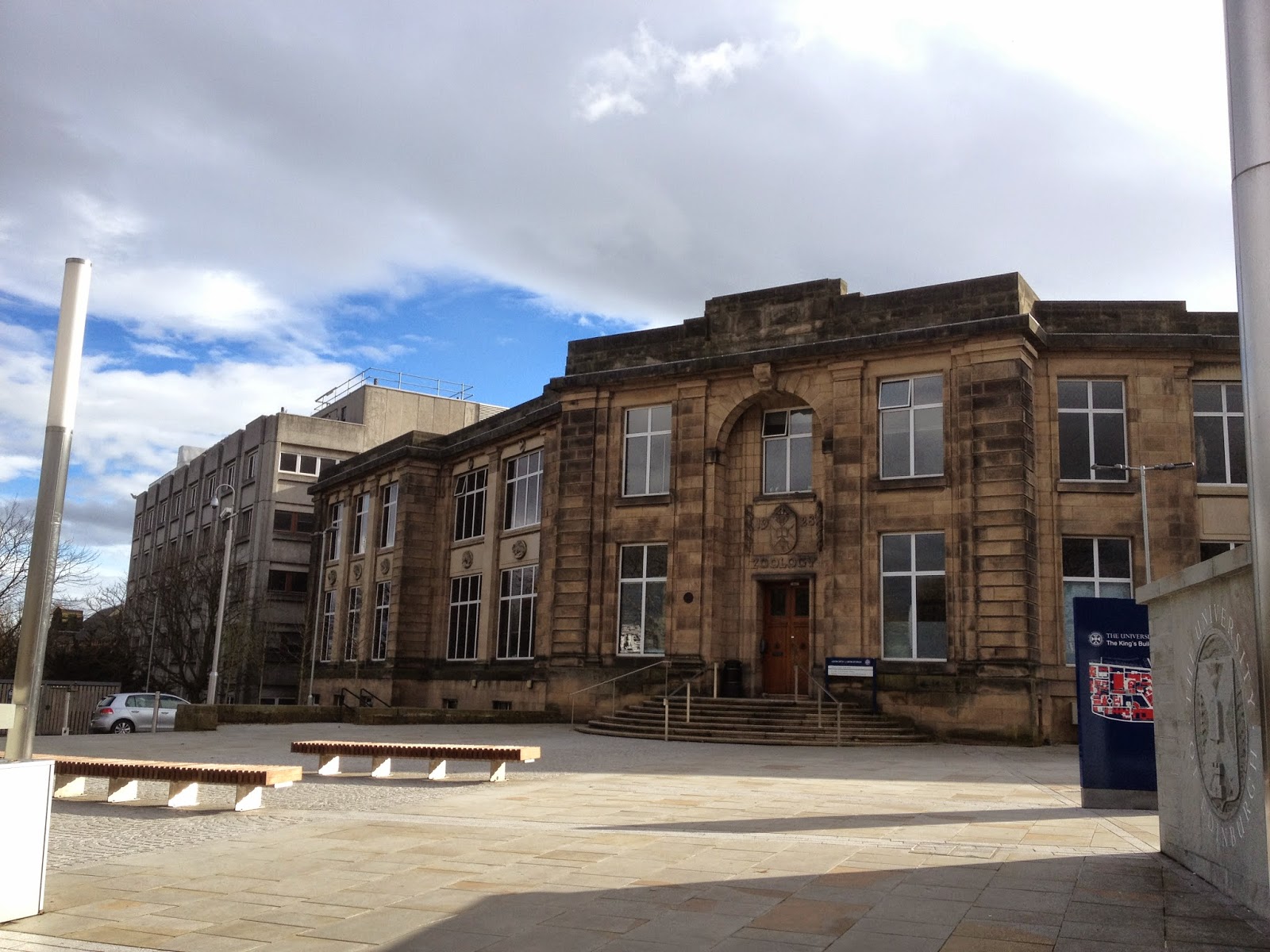 The most perfect conical tree. 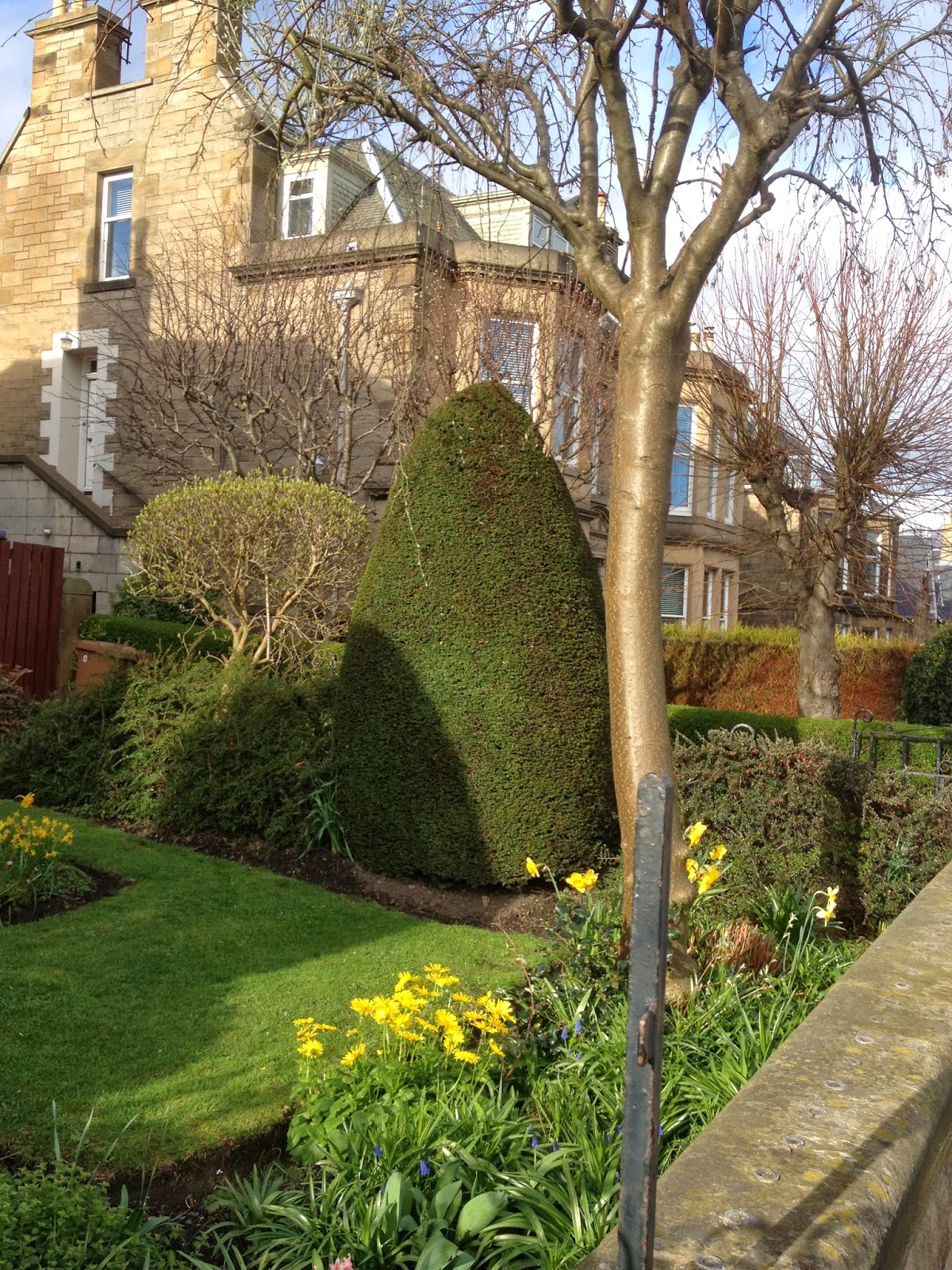 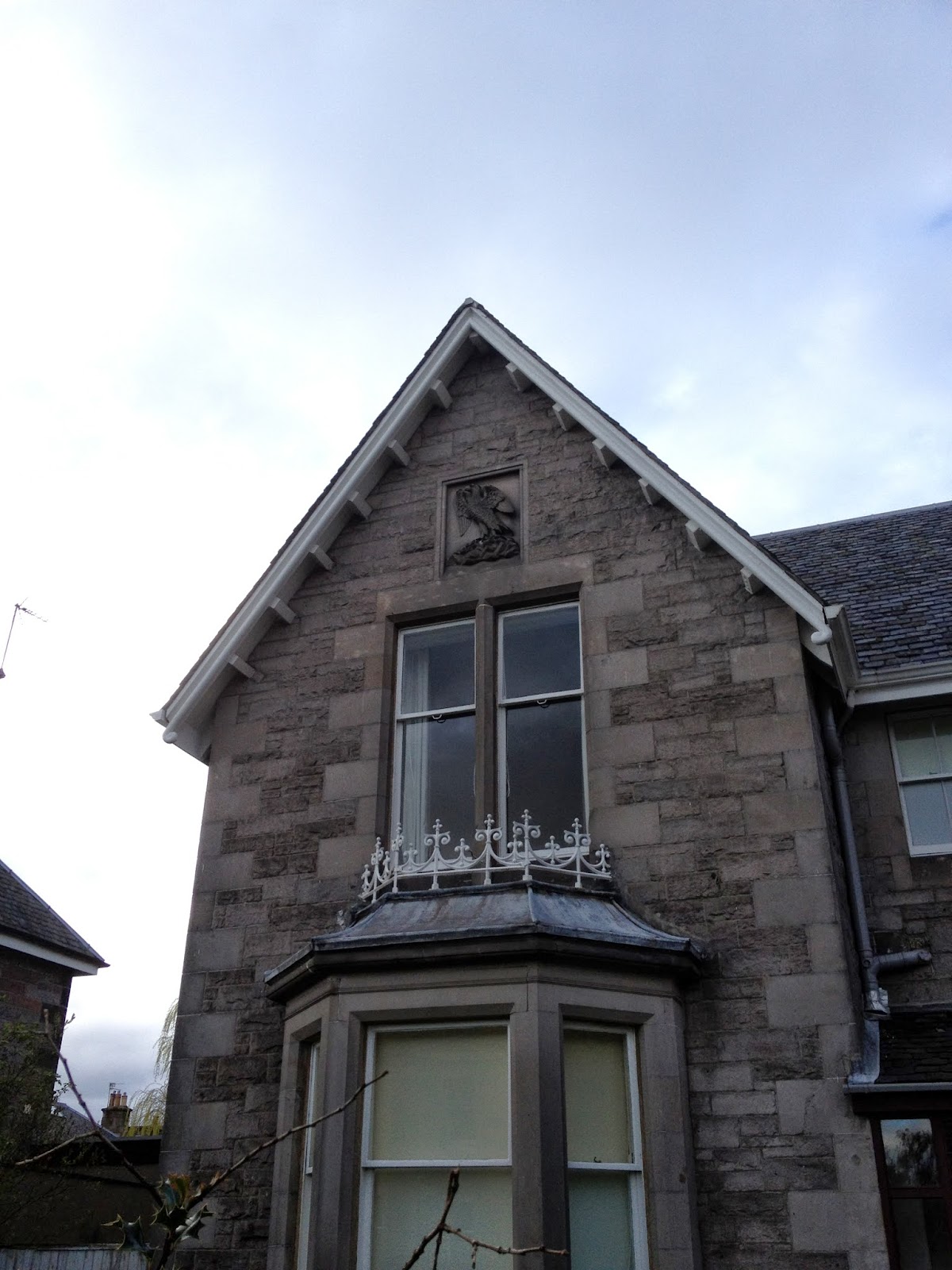 The interior of the travel lodge room. I took the picture because I liked the chair but I love the light in the photo. Not intended but I like it! 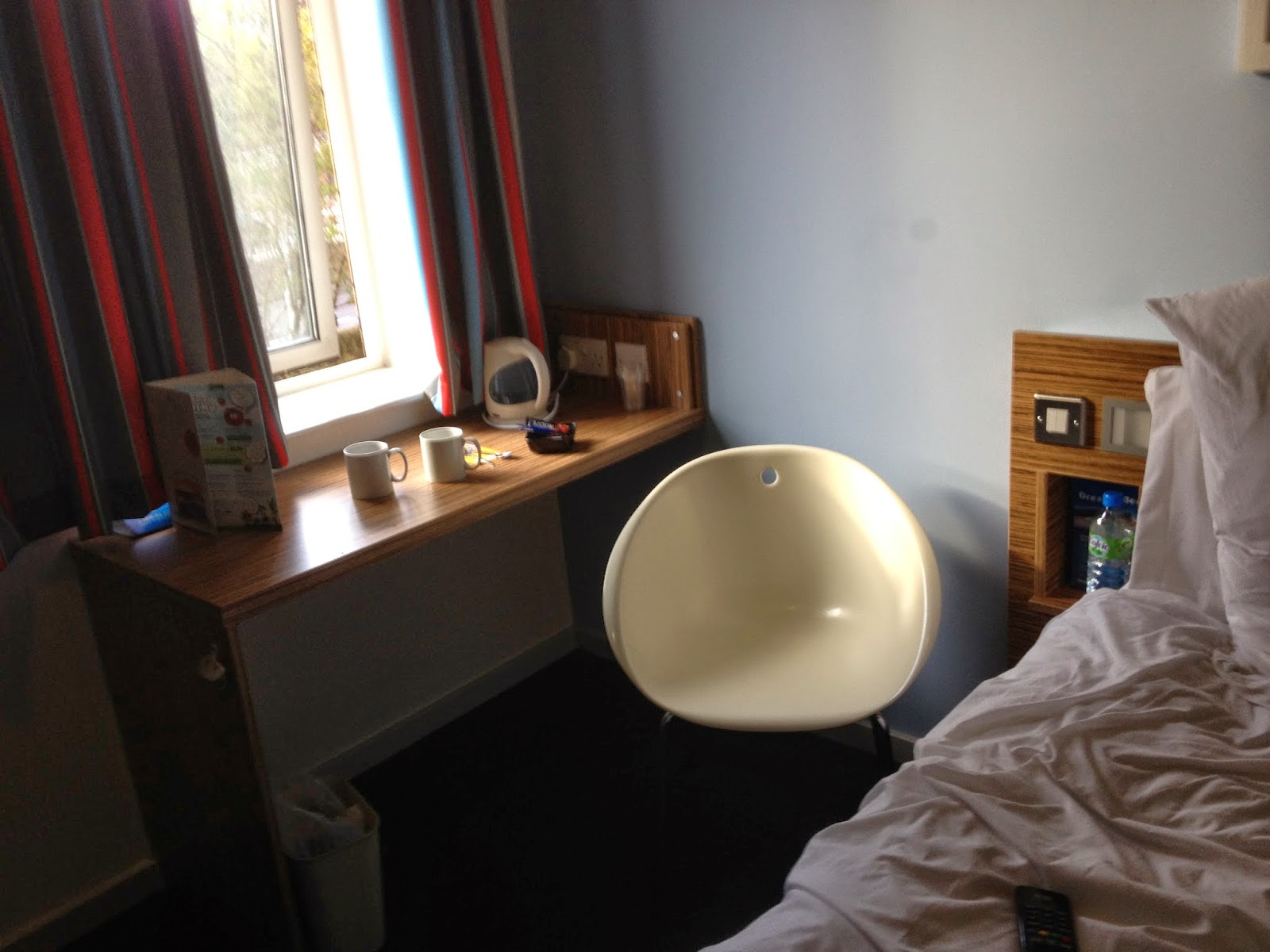 Gorgeous shots! What a wonderful trip right in your own back yard! Whomever trimmed the conical tree must be hell to live with. way too perfect.Right , the light in the room is very soft and gentle. LOVE the chair. I am sure the kitties were not pleased that you were gone.I met a cat yesterday that you would have lost your mind over- sweetest cat ever, laid his head on my arm and gazed up at me purring for hours. He weighed a ton and wore a blue jingle bell.

Super photos! I haven't been to Edinburgh for a while - despite the fact that it is just up the road!!

I love how so much amazing stuff is so nearby everything else in Europe. Here in the U.S. West we can drive for miles and miles and see nothing but miles and miles. I really like the well worn and classic architecture with all the unique detail.

Edinburgh is a favourite city of mine. I'm often passing through it during the summer months, airport to Waverley and then in reverse. I don't venture very far, but often end up in Princes Street Gardens. People always seem to be in a happy frame of mind. I think it would be a nice place to live.

Wonderful post, Sarah! Loved all the photos, and I felt as thought I were right there, as well, thanks to your description and details and careful photography. I lived in a place in Atlanta for a while called Morningside, as well.