Today we went to Chilslehurst to visit the caves. I have been meaning to go there for years but haven't. Our niece works in Chislehurst and suggested it when we last saw her. We met her and her sister there for our tour... 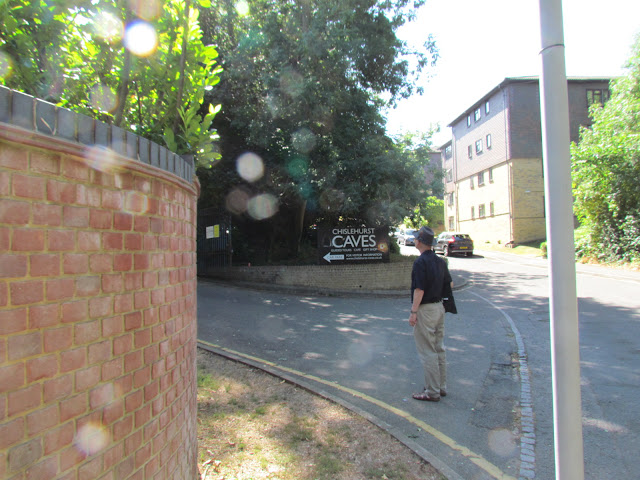 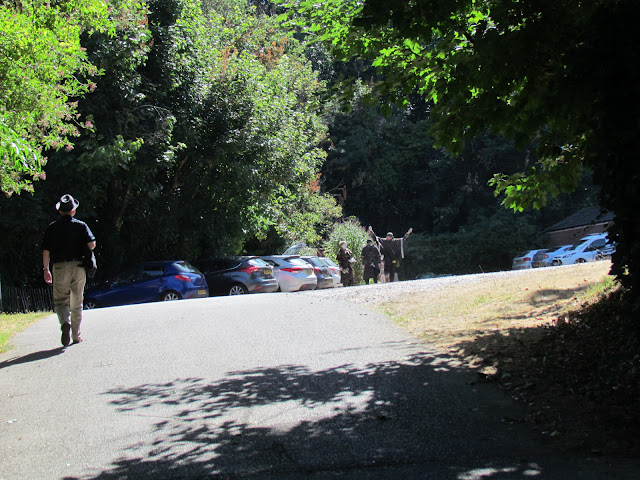 We parked in a local road as there seem to be no parking restrictions, and only realised how massive the carpark here is once we got there. The people in the distance are role players getting dressed up. Nothing to do with the tour of the caves but fun to see. I am not sure what they were role playing. 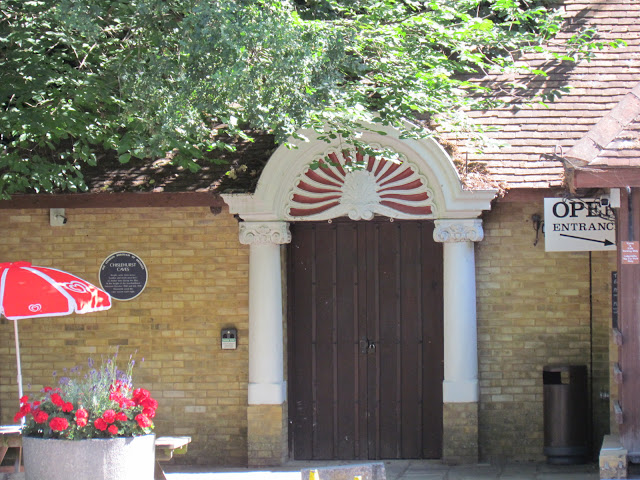 This fancy door is the entrance to the tour of the caves. They are not actually caves, but a mine. Druids, Romans and later miners dug out 22 miles of tunnels from the chalk and flint. Dr William Nicholls claimed, in 1903 that the tunnels were excavated by Saxons, Romans and Druids, although there is no evidence for Druid occupation. The mine was worked until the end of the 19th century. There is a part of the caves with a stage and musicians including David Bowie and Jimi Hendrix played there. They were used as a munitions store in WW1 and as air raid shelters in WW2. There were so many people using them that a kind of underground town developed. One baby was born down there during an air raid. She was christened in the chapel there. Her name was Cavena! She changed it to Rose when she reached 18 but kept it as her middle name.
The guide was good, and we all carried paraffin lanterns which added to the spooky atmosphere. At one point we stopped at a large ledge at the end of a tunnel. It could have been part of the continued working of the chalk, or a Druid sacrificial altar. (I personally thought it was the first one!) The guide went away and turned on a soundtrack of some pretty convincing sounds of an air raid for us to experience. The atmosphere of the place is strange. I suppose because of the damp dark coolness of it but imagination adds its own flavour too I think.
We stopped at an underground pool, where the remains of a woman in a white dress were found. She is supposed to haunt the pool and there are meant to be other restless spirits and strange goings on. Our guide has worked there for 5 years and has spent a lot of time down there getting to know the place. He says he has never seen anything but has heard sounds. He didn't specify so I had to ask. Children's laughter, footsteps and jangling keys! There used to be a challenge that if you could spend the night in the part of the caves where the pool is, alone, that you would win £5. (When £5 was a lot) Only one person ever managed it-a local policeman and he said he would never do it again no matter how much you paid him.
Once back in the daylight and warmth, we went for a delicious Sunday lunch at the Bickley Arms. It was a lovely day and anything like that at the moment feels like a mini holiday as I just don't do much anymore!
Both the caves and the pub are well worth a visit.

Cool and very close to Greenwich it looks from the map. The diagram of the caves online is fascinating, awesome work! No way would I stay in a tunnel or a cave for any longer than it takes to move along and get out of there. I am glad that you went so that I never have to!You are kind of like jesus!

I thought of you when we were there and thought you would like the spooky aspect of it! It wasn't too bad as the tunnels are quite big. Florence my niece gets claustrophobic in some places but she was ok. We asked if she could leave if she felt the need to and the guide said that he could radio for someomne to come and collect her which I though was good.

That sounds so very interesting. We have natural caves here in South Australia (Naracoorte Caves if you want to google) but I have never been that far south. I'd like to go one day, but not on my own.

I have never heard of the Chislehurst Caves. This is entirely new to me. I can't imagine spending the night there for just five quid!

So fun to see something different--thanks for taking us along!