I made this whale a while ago. A while ago whale!  It is a miniature version of one I am going to make with the children at the beginning of the term. I rashly said that I could do an art project with the year six children instead of the art company they usually use, and, as a practice made two large totem poles last term to test my theory. They came out pretty well, but involved an awful lot of preparation work and the few afternoons over which we made them were busy to say the least. But I enjoyed it. It was a project done in the aftenoons following  the SATS tests in the mornings, so it was a stress relieving activity for them I hope. 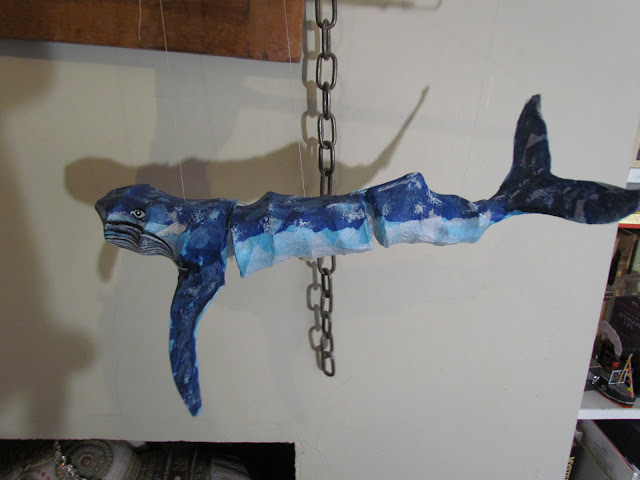 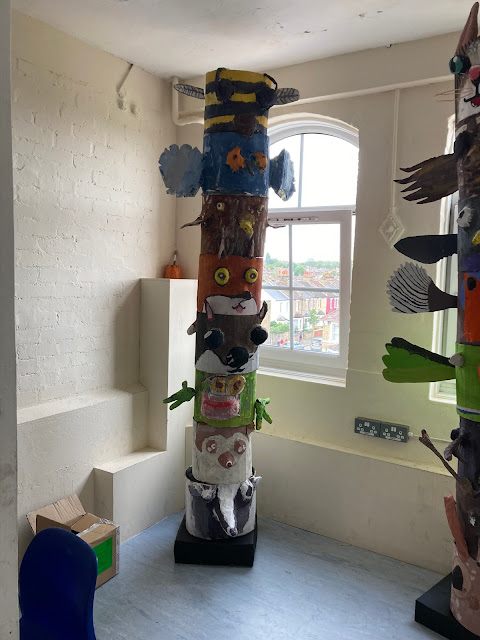 The animals are all British wildlife. 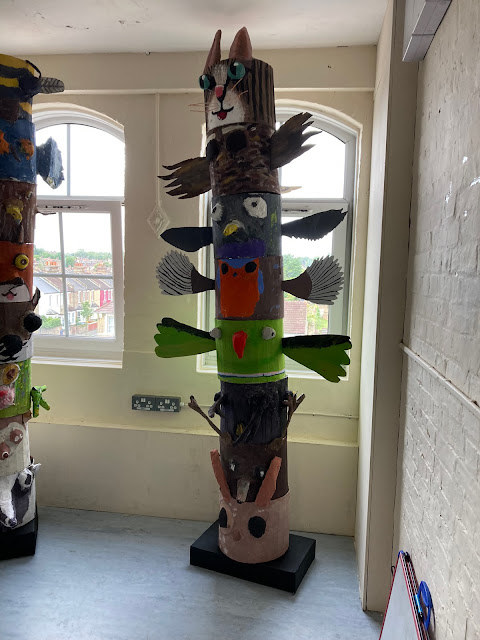 With that project I worked with the whole classes with the help of two teaching assistants. Working out the logistics is just as important as how to do the art, in fact it is the part I find the hardest! For this project with an ocean theme, and also an environmental one, I have planned a number of things to make. The whale is the biggest and will be made from withies (willow sticks) which I am just going to call 'sticks' as every adult I have told about them has said "Willies?" So I am going for sticks. You soak them for a few hours which makes them pliable. This whale is a scale model. The big one will be made in the same way, with three sections hooked together so that there is a little movement. 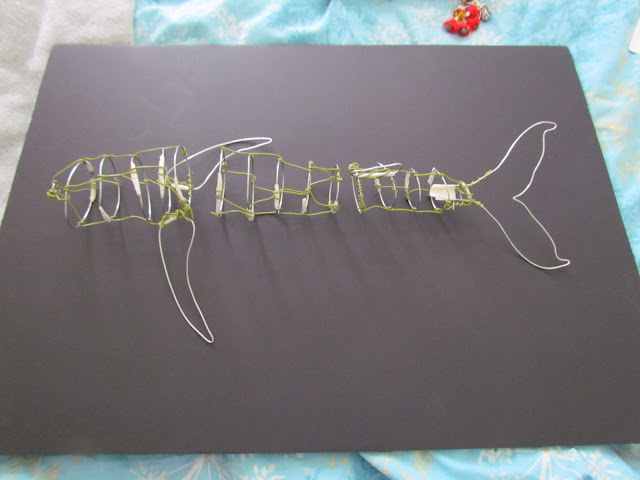 After making the armature, you wrap it in cling film. This provides a surface to papier maché tissue paper onto. I am going to justify the use of plastic because it is an artwork and won't be thrown away. ( A bit dubious but I can't make it in another way.)  Another of the things we will make is a 'great garbage patch' as found in most of the world's oceans. This will be a (hopefully) spinning large mobile. I have been reading a lot about plastic pollution and it does not make happy reading. There is micro plastic in absolutely everything. I was reading about 'nurdles' tonight. They are tiny plastic pellets used to make a lot of different things. They keep being spilled into the sea because of ships sinking, catching fire, and careless practices. Although I am finding it all pretty depressing and hopeless, I don't want to engender that feeling in the children, so will obviously approach the subject in terms of finding out what the problem is, and thinking of ways that we as individuals an contribute to making things better. 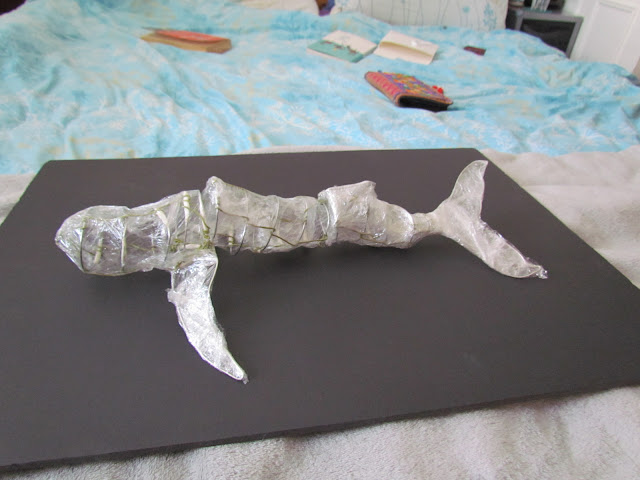 As the paper dries, it has a kind of shrink wrap effect on the plastic. In the small model that was fine. This week I had a go with the withies. I made a large fish. It is good to try things as I have found out the pitfalls now! First, the shrinkage is much more obvious. I like the bony look it gives, but the planned gaps on the big whale need to be much smaller. That is easy as we can just add more circles. The other problem was strength and stability. On the small model I used wire, which holds its shape and is quite strong. I just had circles and struts lengthways. On the fish, I found I needed crosses in the circles to provide strength. They can also be used to give the circles an oval shape.  I was trying to work out how to get the children to make circles of the right diameter. (They are all planned out in my scale drawing.) Once I realised I would need more than I thought, I decided that rather than giving them the measurements and expecting them to make the correct sizes, I would make one of each size needed then attach a piece of tape to say how many more we need. I also realised that using masking tape to fix the circles is much easier than using string! 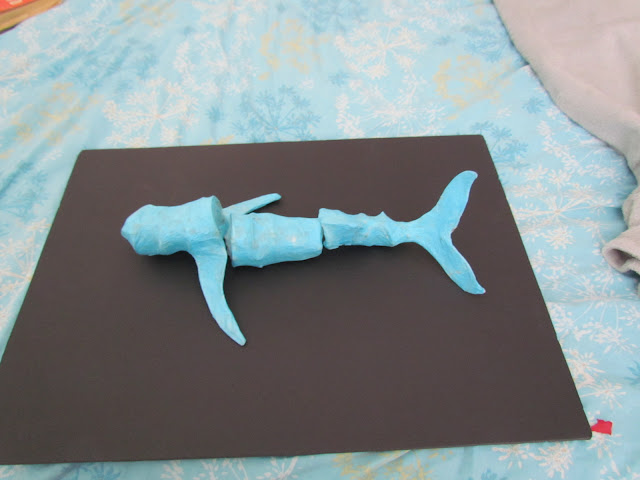 I did a whole layer of light blue, then a top layer of dark blue with added paint details. 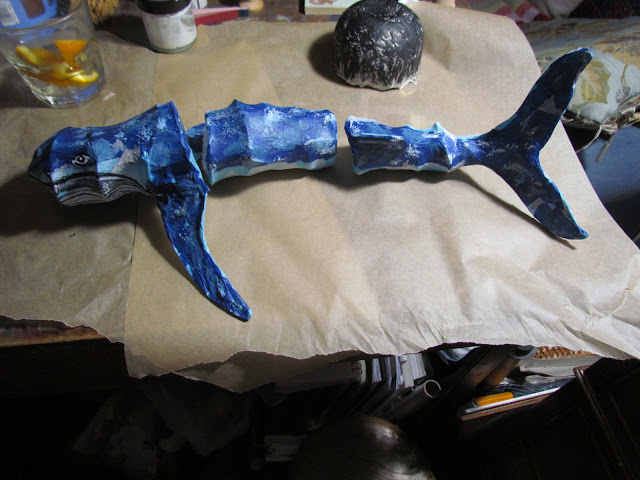 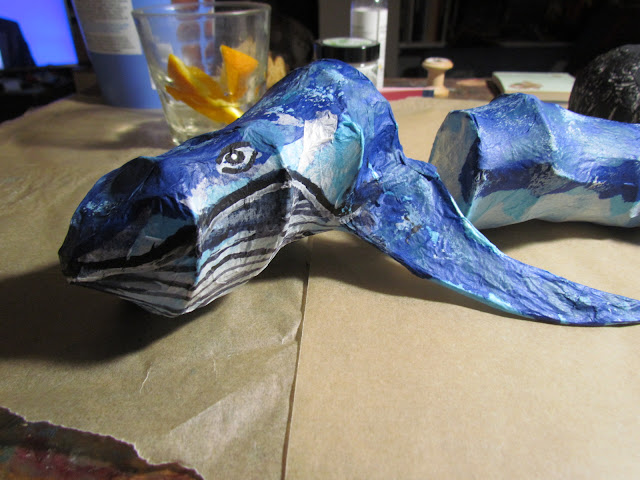 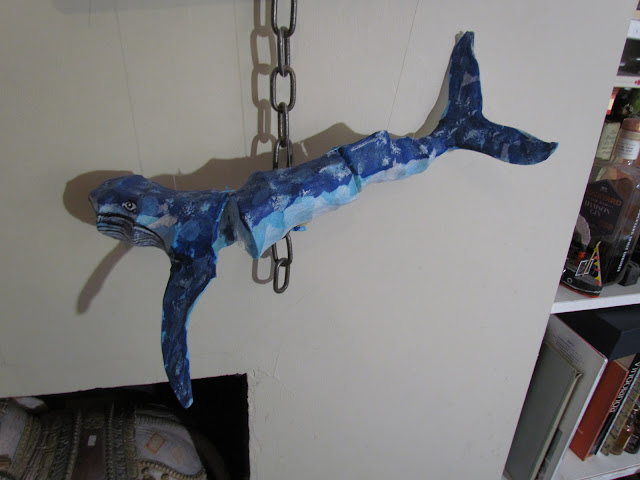 He is hanging on a lovely piece of chain I found by the river. 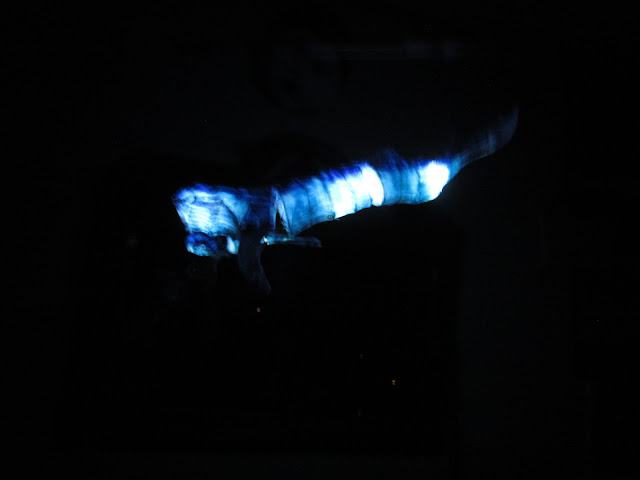 These pictures are awful but it gives an idea of how pretty the whale looked all lit up! I don't think I can do that with the big one though. 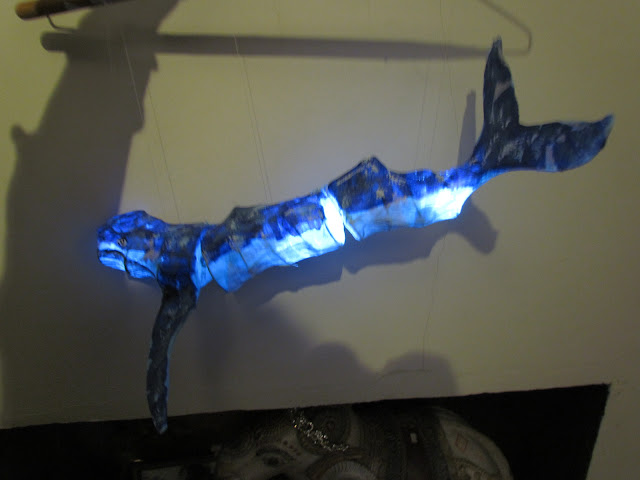 As well as the whale and garbage patch, the children will make papier maché fish, lobsters from recycled computer packaging, and papier maché seaweed. I couldn't think how to make this easily as I wanted it to have some dimension to it. Then I came up with the idea of corrugated plastic (Which will be re-used!). I tried that yesterday too and it worked pretty well. I will show you the results when we have finished. I have done most of the preparation now, and just need to finalise how we are going to do it. This time I will be working with smaller groups so have more flexibility with how I organise things.
I have enjoyed finding out a lot more than I knew before about all things related to the project, such as how lobsters can grow to around three and a half feet, shedding their exoskeletons regularly as they grow larger,  and the things that look like roots on seaweed aren't, but are anchors instead. The lobsters are going to have pipecleaner legs and feelers. I used a plastic lobster that came from Andy's parents, as a model for my prototype, and ordered a job lot of orange pipe cleaners. It was only after they arrived that I realised I don't want the children to make cooked lobsters, but live ones! Back to eBay for blue pipecleaners!
Posted by Sarah at 15:14

How did you make the whale light up? Am I missing something because I am a lazy reader? The totems are fabulous , effort paid off very well!
Not wanting the children to make cooked lobster is very thoughtful - Attention to detail is a thing, perhaps you could do a cooked one just for a slap of reality. Lobsters are for eating, right?
Being conscientious about plastic use is a good idea , however, Jonnie's too late at the fair, as they say...And who knows, when this planet heats up even more ,the plastic will melt , and cool, and it will be a planet of plastic hurling through space. We will be dead but will have left behind a planet sized billiard ball to amuse the gods...pretty sure.

Fantastic! You are certainly ambitious. The kids who work on this with you are so lucky.

What a great project! Could you wrap the armature in calico or hessian sacking instead of cling film? that would add to the cost a bit though. The totem poles are fabulous!

Love the totem poles.
Looking forward to reading how the project went!
Hi via Fresca's blog

Your work astonishes me.
You astonish me.
I just posted your Halloween costumes from last year--hope you don't mind (I linked to your blog). I miss seeing more of your ongoing work here, but love knowing your out there in the world, making things.

Also, it's time for the dolls to put on the socks you knitted and mailed last year. ONGOING THANK YOUs from
XO Fresca and the girlettes