Because consequential things are too much to contemplate in the world at the moment. The increase in mental health problems for people only seems like a sensible response to me. If you haven't got some level of anxiety then I think that would be strange! I miss blogging and keep thinking about writing a post, and take photos all the time and then it never happens. So I thought I would pop in. We are waiting for a currry to be delivered and are going to watch the fnal of the tennis with Emma Raducanu and Leylah Fernandez. I am not normally a tennis follower but this will be a good one. My Mum would have loved it, and loved watching Wimbledon on tv every year. I will watch it for her! And it is on at a good time too. Anyway, here are my everyday things from the last while. 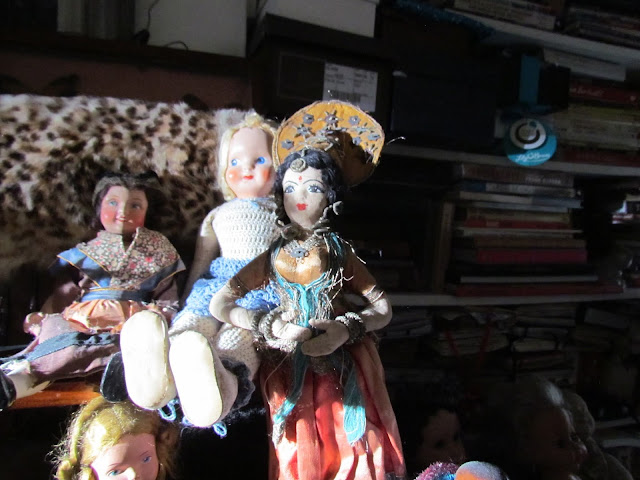 Our flat is quite dark, as it only has windows at the front and back, so the bedroom is light and the hall, and the kitchen too, but the sitting room needs lamps. But at certain times of the day, the sun shines in the front, through the window above the door, and through the kitchen window at the back. The dolls were caught by the light from the front, and my mug by the light at the back. The dolls are from ebay, Linda Sue, and a shop in Headcorn, where Mum and I used to go for lunch at the witch cafe. It wasn't called that but it had witch dolls and was called that in my mind. The mug is from a charity shop, and is my favourite morning tea mug. The light shining through it made it look so beautiful. 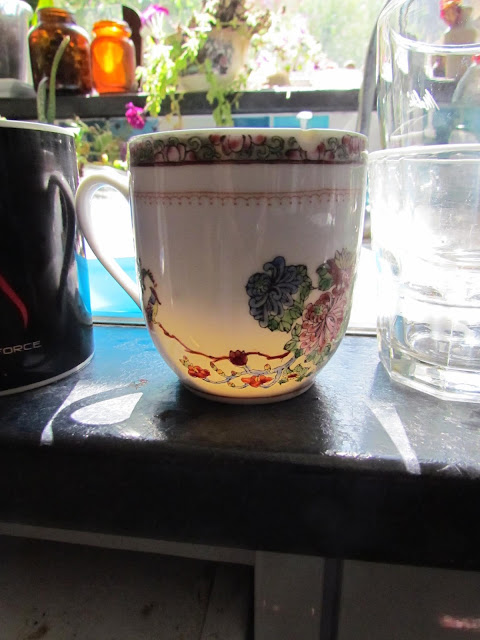 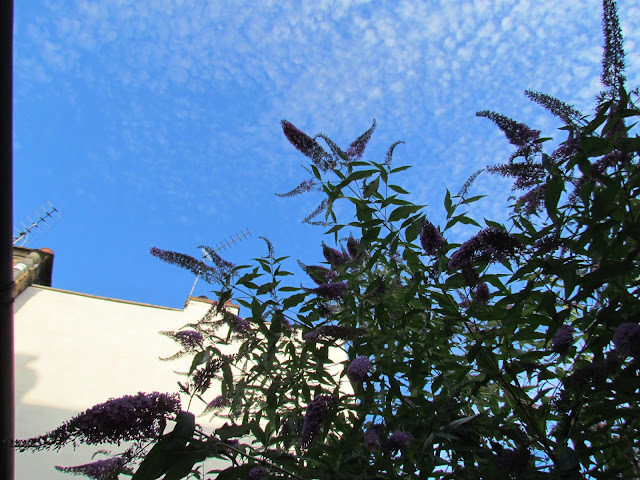 This is the self-seeded buddleia which provides shade in the yard part of the garden. I just trimmed it today to cut the brown flowers off and hope a few more appear. 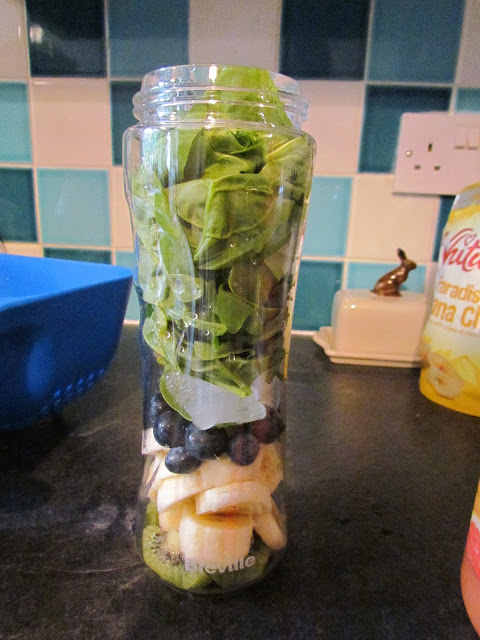 I bought a juicer, and was happily making smoothies with almond milk, until I realised that almond milk doesn't really agree with me, so I need to find some other recipes. It is a marvellous machine though. 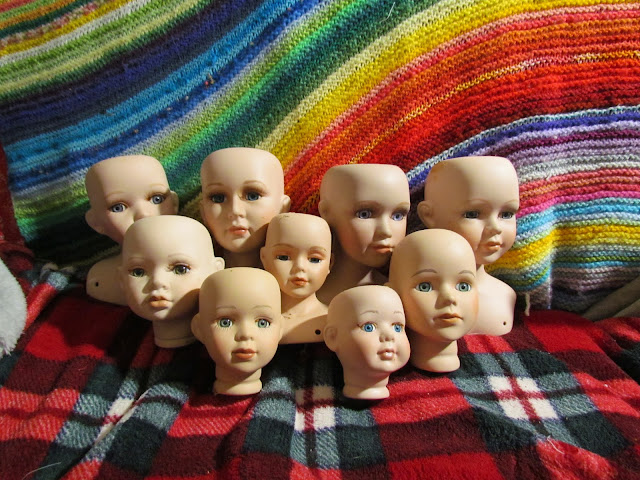 Oh dear. Couldn't resist. Vague ideas of an artwork. Still in their box. But, although they are not old, I like them. Mainly because they are a group, and all have different faces. I like the second from the left at the back best. She looks wise. 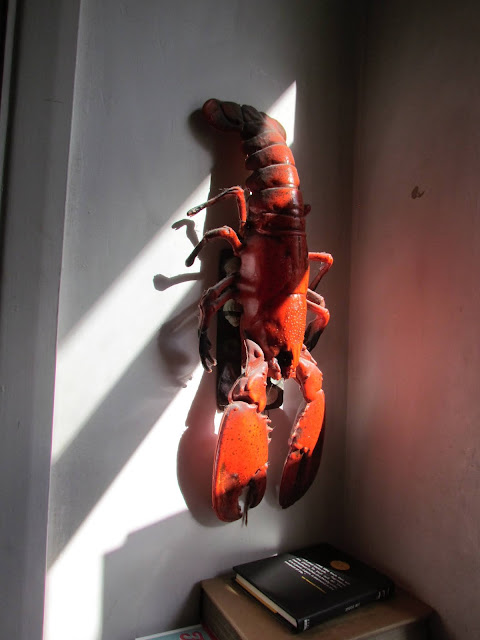 The lobster is from Andy's parents' house near loch Tummel, that we had many happy holidays in. They sold it in the end as they felt they couldn't look after it anymore. It was amazing, a log cabin with a grass roof that I think was imported from Norway or Sweden in kit form. They didn't build it, but that was its tale. It had a certain woody, woodsmoke smell, and was far too dark at night. I am not scared of the dark, but find total darkness suffocating. That was its only downside though. This lobster used to hang in the kitchen, where Jean made many delicious meals. 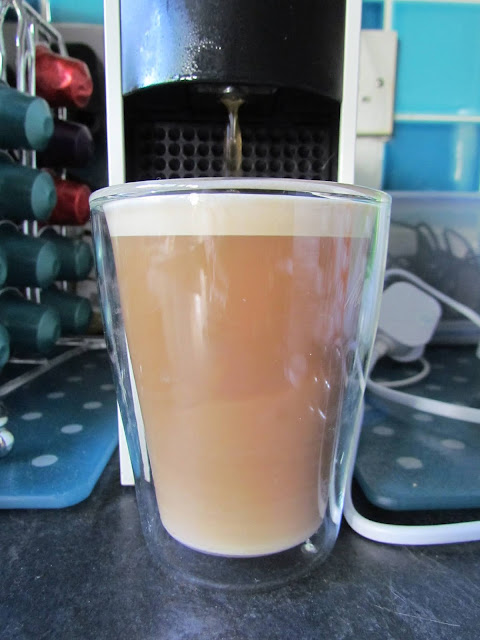 Lastly coffee. Chocolate coffee from the magical coffee machine. This one had its picture taken because of the gradation of colour from bottom to top.

Right, back to the tennis, which Bollie is now watching closely!

I love the doll heads! The left middle row one looks just like a little boy I know, when he was two. Now he is three and a half and more boy like.
Your tea mug is beautiful.
Have you tried oat milk? I tried it this morning for the first time and it is creamy and sweet. I don't like almond milk or soy.

The dollys look interested and amused.
Was Headcorn where we went for lunch with your Mum, and to the charity shop where i bought...things? I love seeing your house, I miss it , I miss you. The coffee glass is cool- the invisible line around it intrigues!
Pretty things! Everything that claims to be milk and is not milk- is not milk. If it were sold as it really is people might not buy it- Almond water- Not a good substitute.
I would have loved Andy's parent's house, sure of it! The lobster is a marvel.

Good to hear from you again.Barbara

Hi River, perhaps I might try oat milk. I thought about just mixing nice things with water. THe faces of the dolls do look quite real. I think they need to come out of their box soon!
Yes it was Headcorn. THe charity shops are good there!
Hi Barbara!

So, so happy to see you and your glowing things again.
Radiant circles of rain.
Please feel free to post all those random pix from the summer 😀 too! I’d love to see them anyway…

If you’re interested, it’s Super easy to make oat milk—blend oats and water in a blender
and strain
(same as how oatmeal porridge produces its own “milk”).
Add a bit of salt, vanilla what have you if you like.
It’s not thick like commercial oat milk (thickened) though.

Glad to see you again in blogland, Sarah! Love your "incidental" daily photos. Your charity-shop mug is beautiful and the lobster is fabulous. I'd like one of those myself! I haven't gotten around to deadheading our buddleias yet. :/