This Year's Garden and the Underneath of a Bee

The garden is an ever changing project. Each year recently I have decided to do something with the middle section of the garden. One year it was a chamomile lawn, one year sunflowers, and last year it was vegetables. I go for weeks without doing anything to it, then have a big blitz, and attempt to pull up the massive weeds, cut things back, then take it all to the recycling centre, (the tip!) Well this year, after an initial blitz, I then did nothing for weeks, and the constant rain, followed by a lot of sun, produced a mass of plants. I then decided to just leave it, as the bees are happy, it looks good and I don't have any spare time. I have been going up to the pond to check the progress of the yellow flags, as you can't see them from the kitchen. They were already in the pond when we moved here, and all they need is cutting back in the autumn. 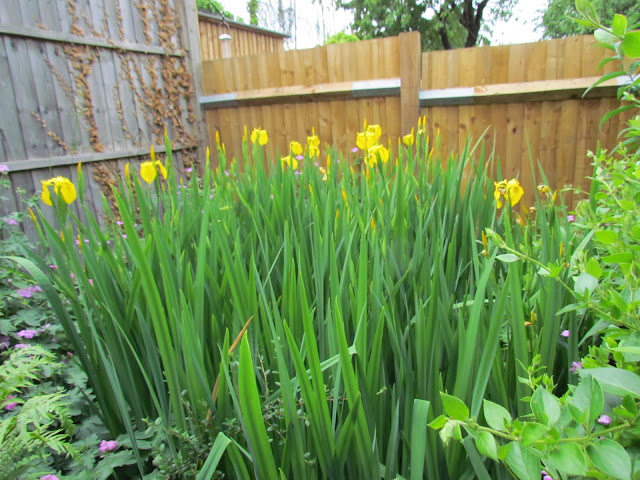 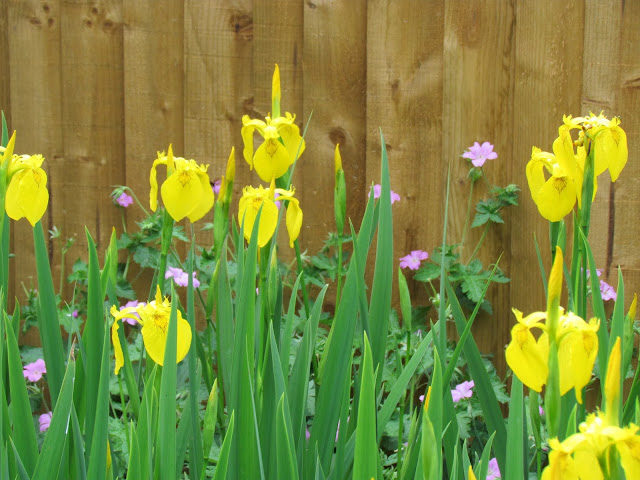 The pink geraniums were from my sister in law Jenny, and have spread everywhere. 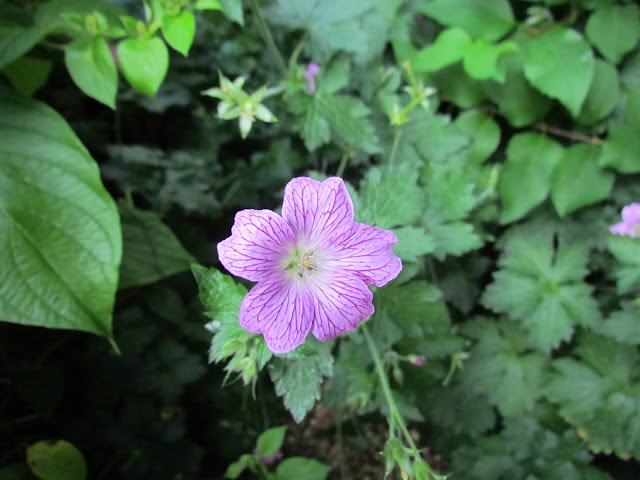 The honeysuckle was already here and is a beast. It smells good on a summer evening. 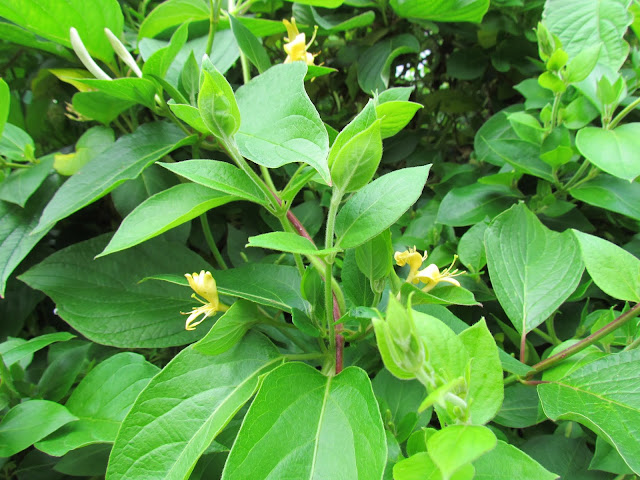 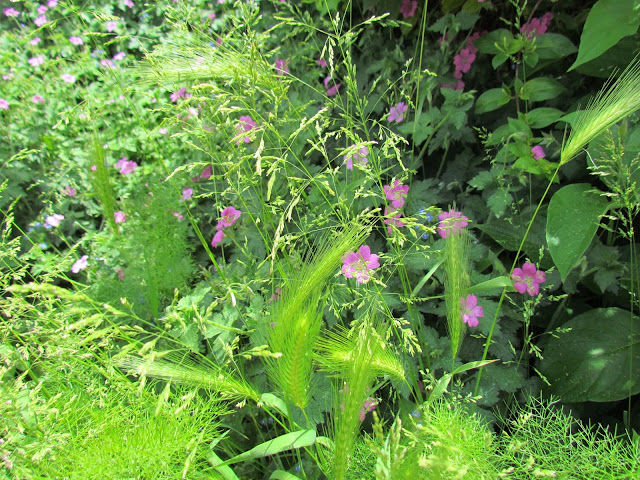 I think this purple flower is a salvia. It appeared about three years ago and also spreads nicely. There is a pink one somewhere too. Bee number one. I took loads of pictures, and couldn't really see what I was taking. My camera has a slight delay between pressing the button and the shutter going, which is just enough delay for a bee to fly off as the picture is taken! I got better at timing the shots and got a few lucky ones. 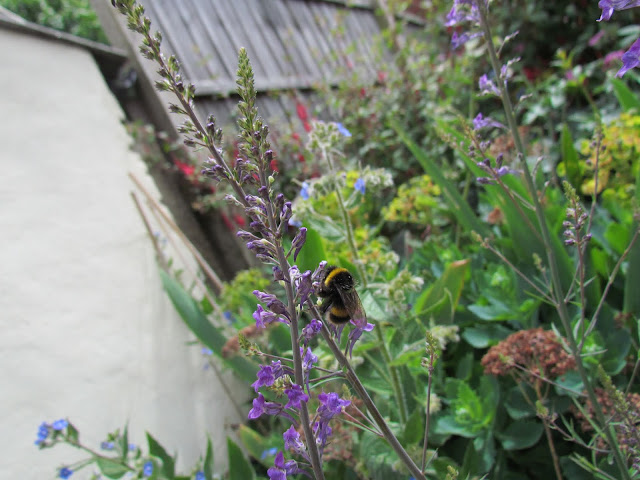 The one below is my favourite. Look at the bee's face! It is amazing. I don't think I have ever seen the underneath of a bee. 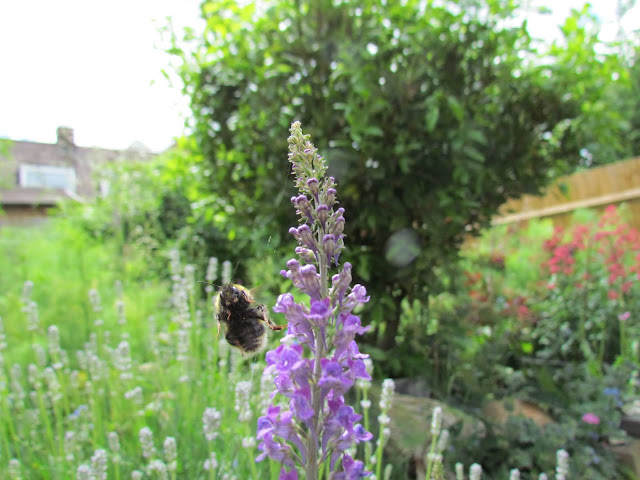 The lavender behind the bee is one I grew from seed years ago.
It lasts well and has self seeded on the steps. Behind that is a bay tree that started off quite small in a pot, and has now rooted in the ground through the pot which is slowly disintegrating around it. 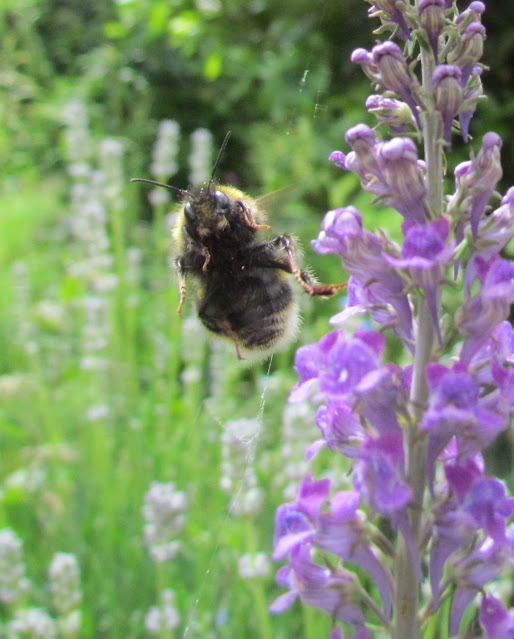 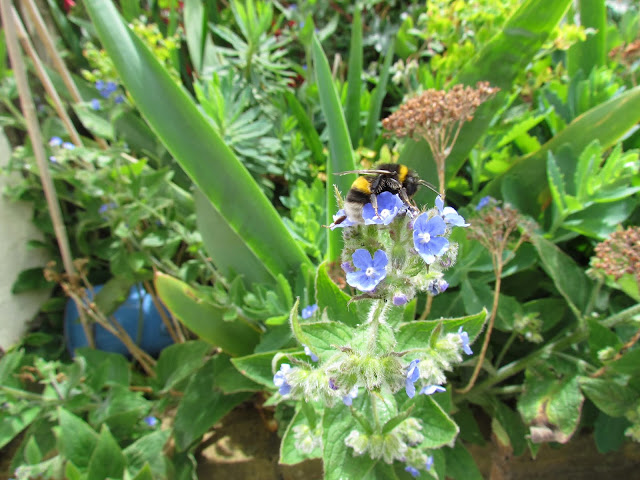 The green alkanet appeared in the garden about five years ago. I have had a constant battle trying to get rid of it, which is almost impossible. This year I have decided to work with it! The bees love it, and it is a really pretty colour. I will just chop it all back later in the year and stop thinking of it as a weed! 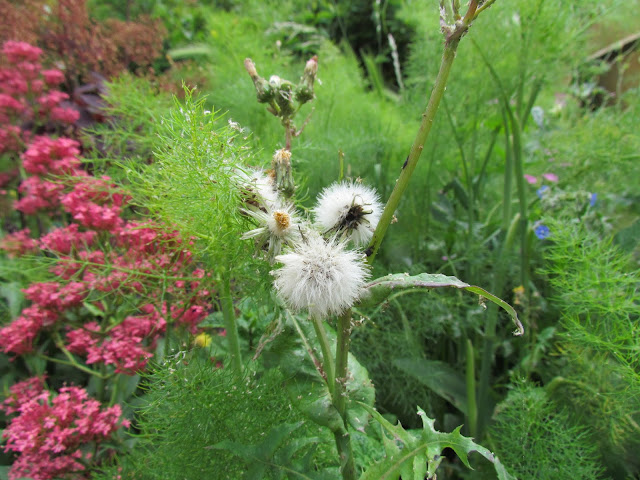 I did pull up most of this plant, also a weed, not sure what but it looks like a dandelion except taller. Unlike the alkanet it is really easy to pull up. I missed this one, and thought the seed heads looked lovely. The pink flower is valerian (thanks Steve!) Interestingly, I didn't see any bees on it while I was out there. Jenny gave me that too. Also there is fennel growing. Fennel loves our garden. Another bee favourite and a really tall plant that looks good right until the seedheads emerge, so I only cut that down at the end of winter. I can't remember where it was from but it is another self-seeder. 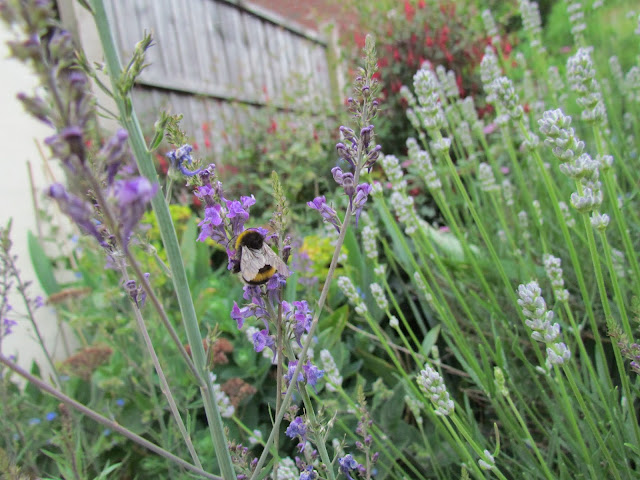 Behind this bee, you can just see the pink fuchsia. Jenny gave me this when we were in our last flat. I didn't want to leave it, so dug it up in freezing weather and moved it. It was fine. Then when next door had builders in, they dug it up with their digger. I found it lying on the ground. It survived that too. Then last year, I thought it had the disease that they get. I cut it right back and it is still fine. 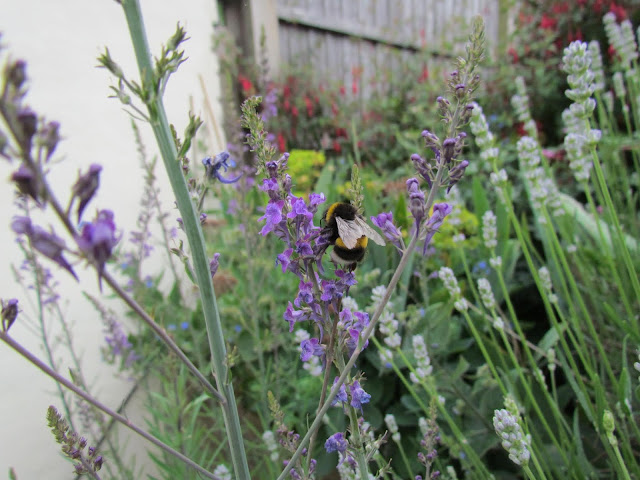 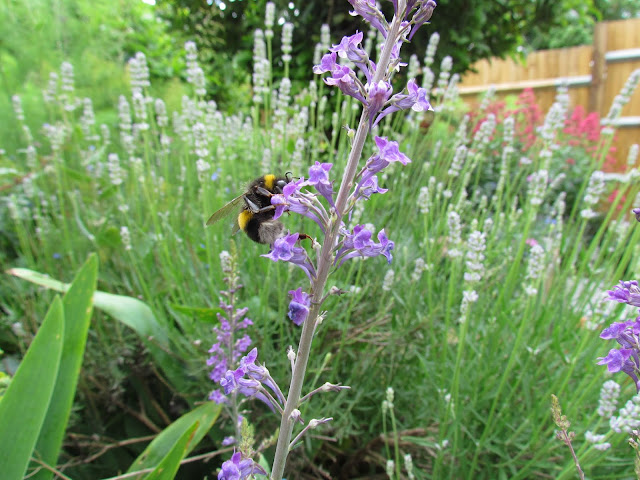 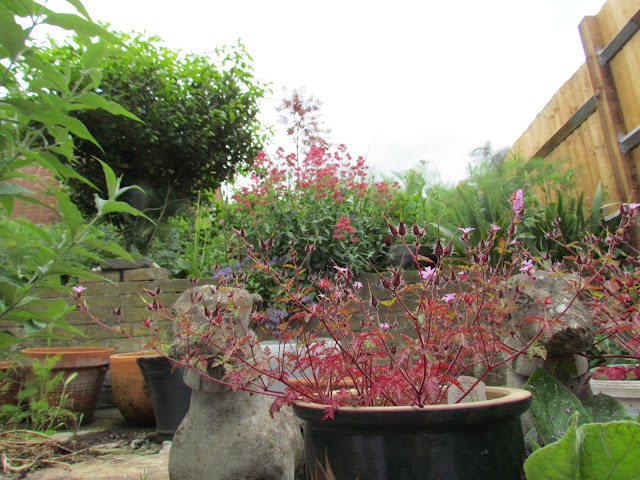 I had some particularly garish begonias in this black pot last year. The soil is still in there, and this little plant has been growing happily in it for ages. I think it is called ragged robin. The dogs were found at the tip, and a grumpy (but helpful) tip man helped put them in my car. I got them out and into the garden by myself, and they are very heavy. I love them! 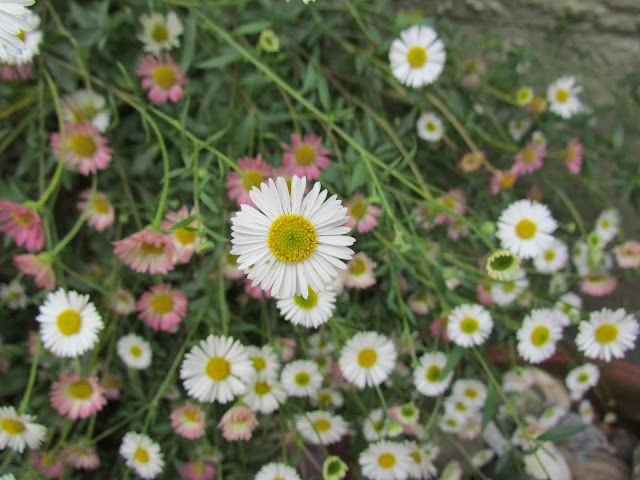 Finally the daisies, also from Jenny, also great self seeders (a theme is developing here) which grow out of seemingly nothing and adorn the steps. They flower all year. I think they are my favourite plant in this garden due to the above mentioned properties.
Posted by Sarah at 15:23

Those final daisies are Erigeron, also called seaside daisies, I have several clumps of them here which I planted about a month after I moved in, between the rose bushes that were already here. I love the smell of honeysuckle. Your garden is fascinating, I love it. So wild and free.

The underside of a bee is about the cutest thing I have seen all month! Besides Ernie. My camera is the same - late clicker. You did well to get those shots of bee action. Your little garden area looks so sweet. LOVE the heavy dogs- that must have been a challenge to get them back there and lined up so nicely. Pretty sure the cats are thinking that you are worshipping false gods. You will be reported.

Those daisies WILL take over! We have some on our patio, and I like them too but they must be contained. I think the plant in the black pot is herb Robert (perhaps ragged robin is another name?) and I think the dandelion-like thing is sow thistle. When we first moved into our flat I tried hard to eradicate the alkanet and then I thought, "Why?" It's actually quite pretty and as you mentioned, the bees love it. We just let it grow now!

Oh yes-it is herb Robert. I just looked it up and ragged robin and they are quite similar. I have probably called it the wrong name always! I wonder if it is edible.