The last two or three weeks have been really busy. I have had a lot of cat jobs which have all been lovely but take up most of the day. In between cat jobs I have been continuing to clear Mum's house with my brother. It is a cycle of sorting, filling the car, unloading then sorting some more, reminiscing, taking things to the charity shop, or finding homes for them here if I am keeping them. Today I went, and decided to look in the loft. There are all sorts of old things in there from different eras, and I got quite distracted. We went up a couple of weeks ago, but this time I was on my own, so had a bit more time to look at things. It is sad to do, and I just want it to be over now. In between times I have been drawing in my journal, just pictures of toys mainly, and faces. It is relaxing and easy to pick up or leave. I have pretty much stopped knitting for a few weeks now, as I have a very sore left wrist. My left hand does the holding of the work while my right does the moving, but I think I must grip it too tightly. I have tried to relax my grip but every time I knit the pain is worse afterwards. Weirdly it doesn't hurt while knitting but I am worried I will permanently damage it if I don't have a break. I will be very fed up if I can't go back to it, but for the moment I don't have time anyway. So here are most of the pages so far in my new journal, with brief explanations. 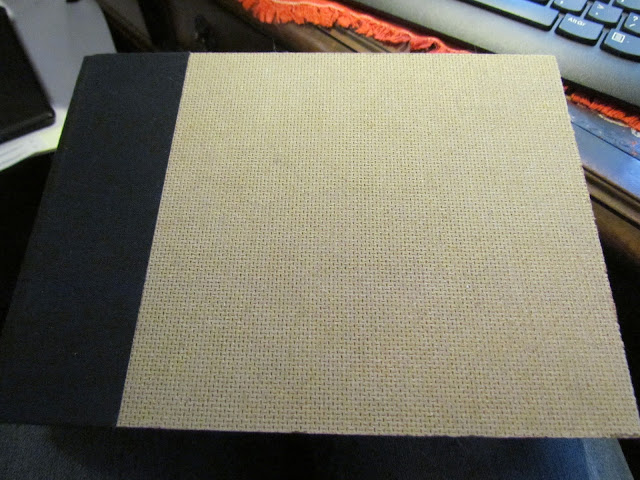 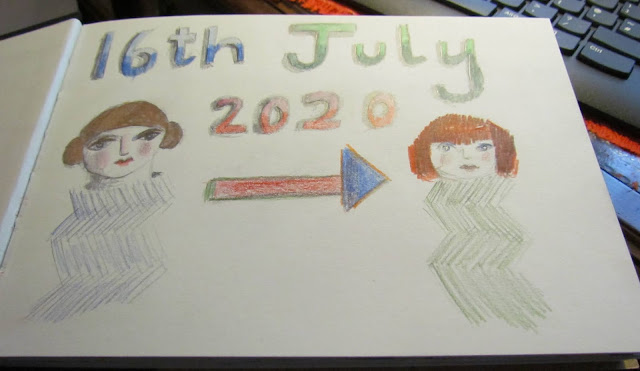 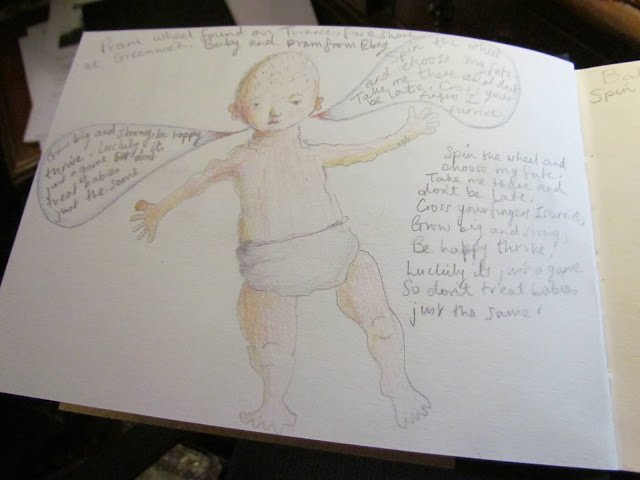 These two pages are sketches for an idea I have to use an old pram wheel I found on the foreshore. I have all the component parts but was waiting for a suitable circle of something as the back. I recently found a metal disc near to where I found the wheel, which I think will do, but I have not yet cleaned it up. The pram wheel is going to spin (I hope!) as a wheel of jeopardy. The baby will be in the pram attached to the wheel. Behind the sections will be various risky baby pursuits. My ideas are not quite fully formed for the pursuits, apart from the one that inspired the idea along with the pram wheel. That was the sight of a family sitting on the foreshore sand with their baby sitting there too, having a picnic. Not the most hygienic environment for that, what with the raw sewage that still gets pumped into the water at various points! 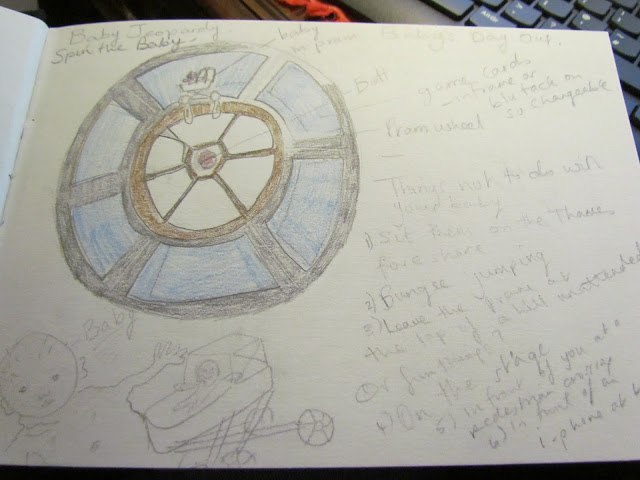 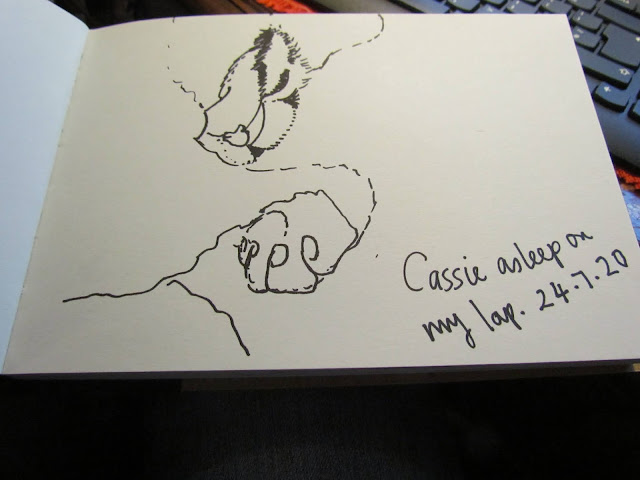 A quote taken from Fresca's blog which I liked and sums everything up pretty well. 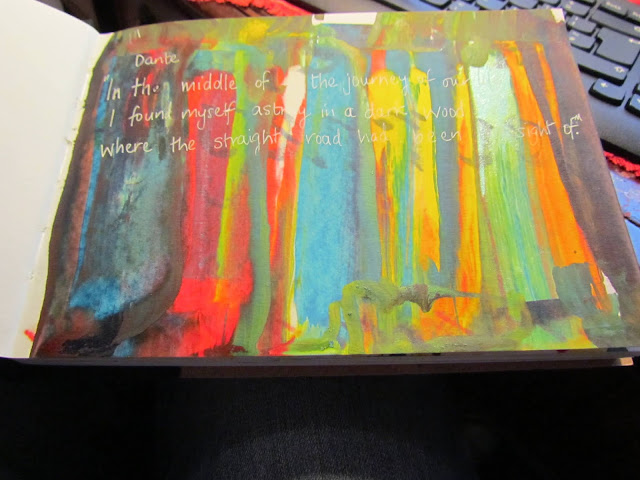 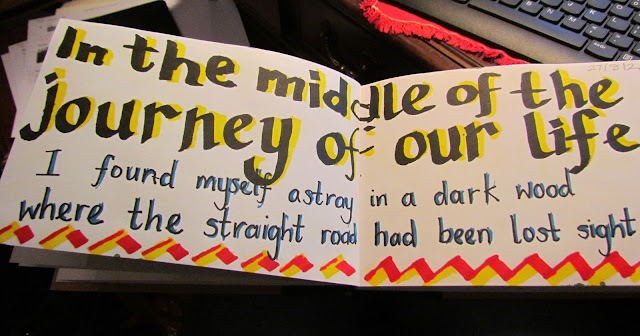 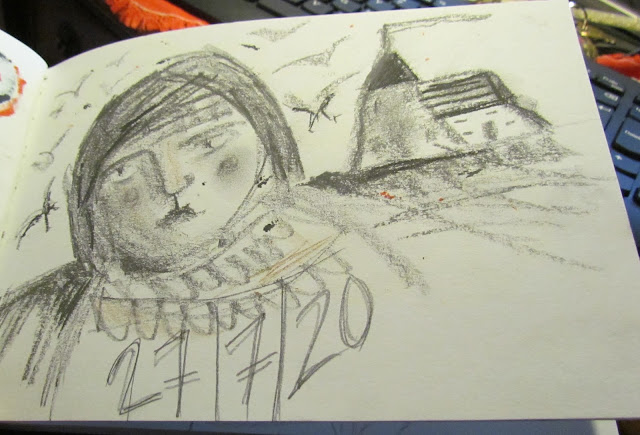 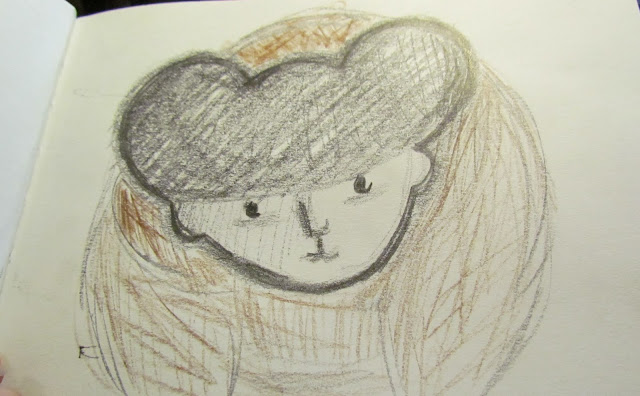 A page from one of my old maths books. Thinking about it, writing the question out would help the teacher more than me as maybe it is easier for them to know if I have the right answer. 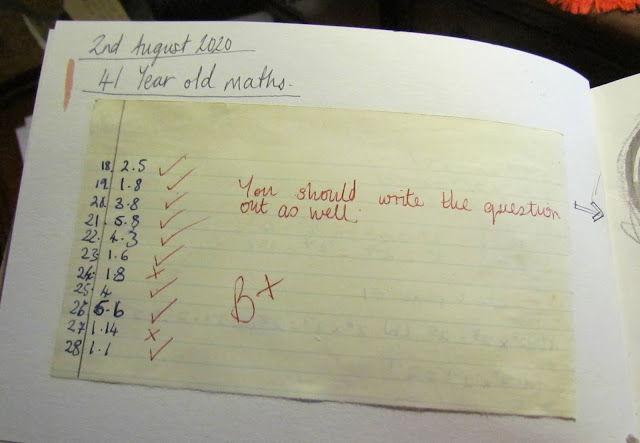 Maths torn up and re-used! 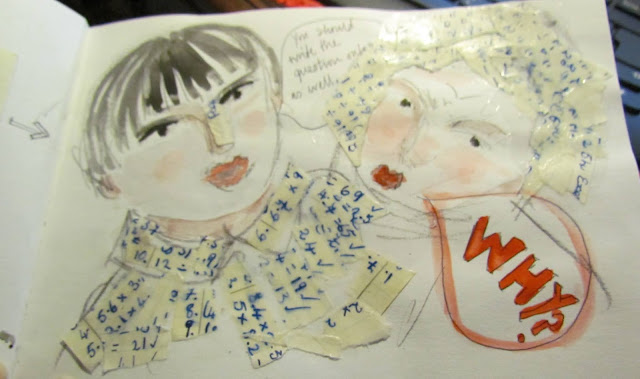 Inspired by illustrations from one of the old books I found in the loft.

Doodle from a splodge of paint. 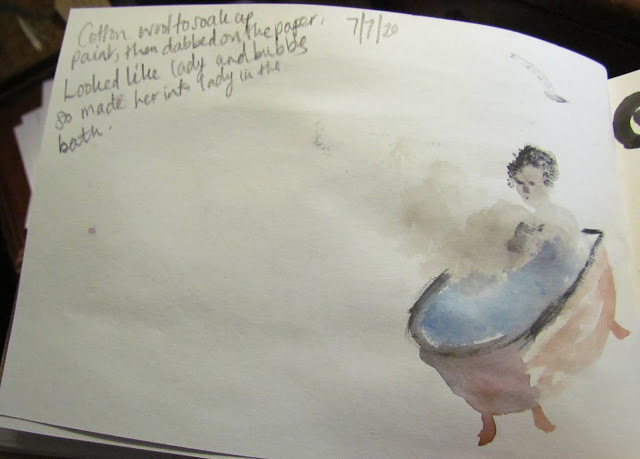 Made up medieval looking face and weird bunny. 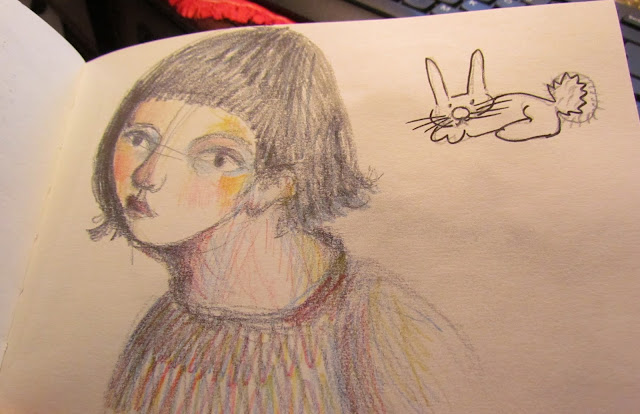 A new doll, explanation of whom another day, and an old bear not from home but from the glass table of precious things. I thought he wanted to come out so he has. 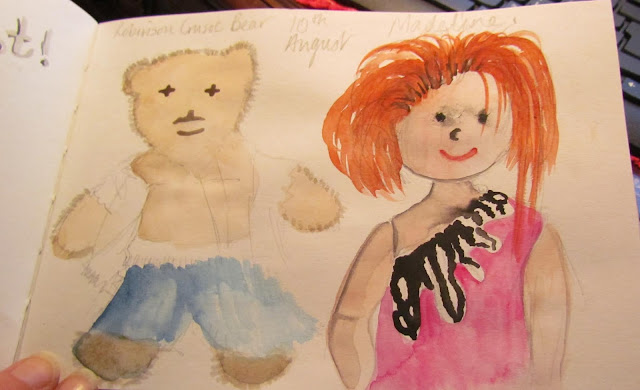 Another face of the doll where the black paint of the eyes didn't run into the rest of the face! 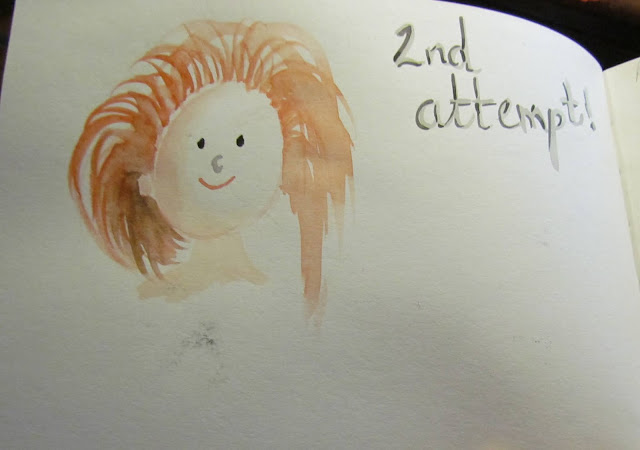 Doodles. I drew them, then got a little obsessed with outlining them in a thicker line, which seems to make them look better. 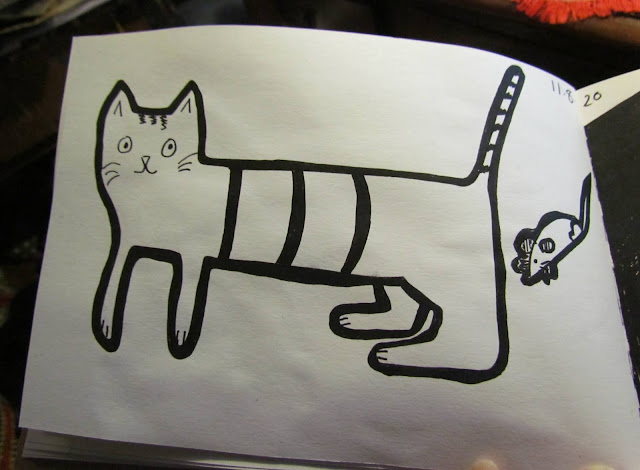 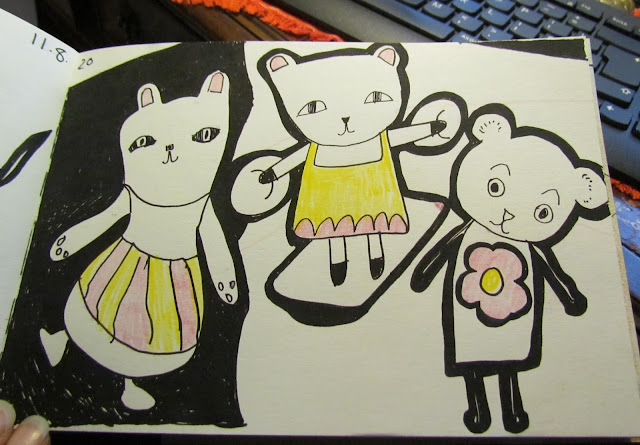 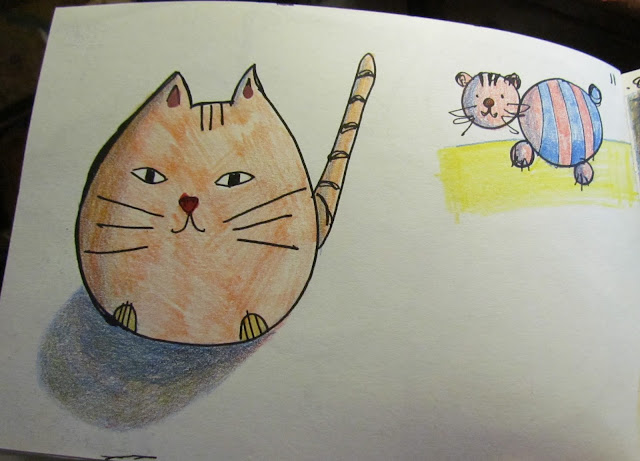 Part of the fireplace display. They match in real life as both have green flowers on. The dog is lovely. Not sure if he is a small vase or a large egg cup. 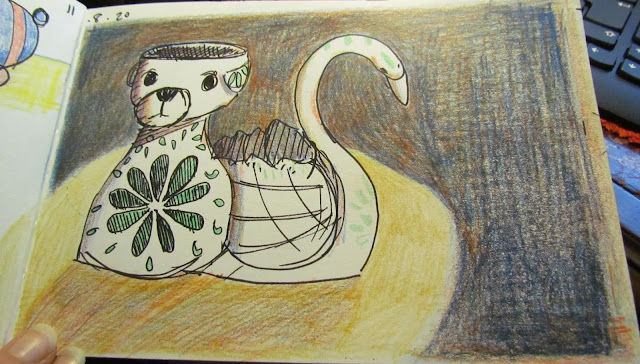 A Dalek and robot from Andy's shelves. I got the Dalek and the robot was a present. He is wooden and is actually a nutcracker. 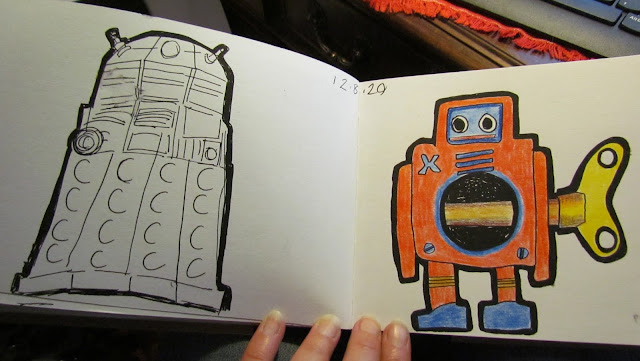 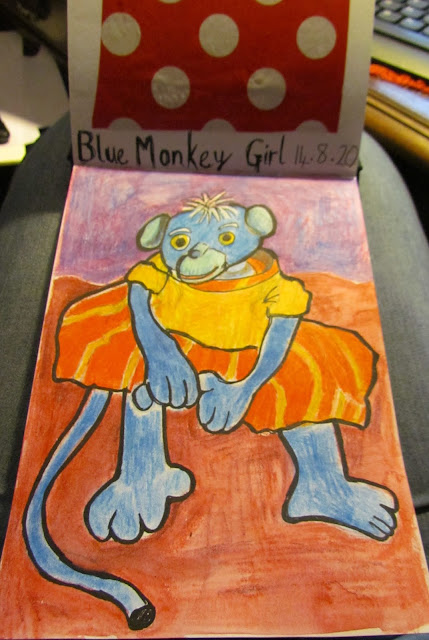 So has this little sailor baby. He is velvet and very sleepy. He lives with the bears on the settee at the moment. 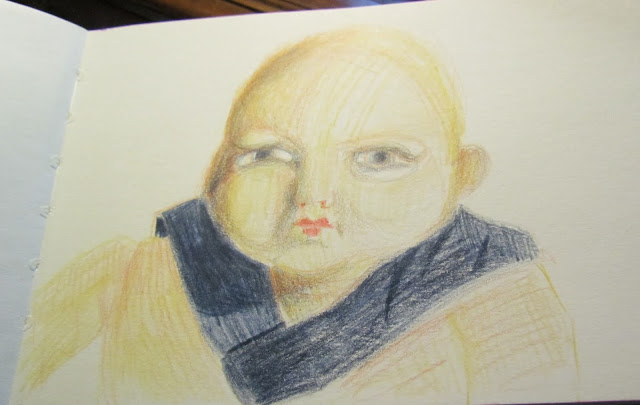 This is most inspiring,Sarah. I do love all of it every one...I love the lady in the bathtub best. I miss your cosy house, tea and orange cake. I miss you most of all. The velvet sailor boy looks as though he may have gotten. into the cake and eaten all of it. Your drawings are charming. Great idea for the baby in the pram, baby hi-jinx.

Oh, oh, oh! You have got the red-hair girl JUST RIGHT on only the second attempt!
I love her!!!
It frustrates me how hard the girlettes are to draw, when they have such deceptively easy-looking, simple features.

You inspire me to try drawing them again---and other toys.

I love your sketchbook, with its many moods

Robinson Crusoe Bear--talk about being lost in the middle of the journey... Literally!

Risky baby business--that's hilarious. And also legitimately scary. So many things could (and can) go wrong on the wheel of fate...
The PRAM wheel of fate.
Ha.
The sketch of the pram wheel looks like something out of Doctor Who.

And then, there's a Dalek.
Danger, danger, everywhere.

Looks like there's a whole tale to be told about the medieval face.

The doodle animals are appealing.

Thank you for sharing.

Interesting! I was going to say, Madeline the doll must SURELY be one of Fresca's "orphan reds"?! I like your thicker line and cat doodles.