The Lion and the Rabbit

I was very happy when I found my first dress pins on the Thames foreshore. I thought I would never find anything so tiny, but they do show up quite well due to their coppery greenish hue. Once I had found one, I found quite a lot in one small area. Then I went back a few weeks later to the same spot, as I had had an idea for which I needed more pins. I was lucky again, and collected quite a few. The pins, made of copper alloy, were used to fasten clothes between 1400 and 1800 and each one was made by hand. Many were lost and ended up in sewers and drains, and hence on the Thames foreshore. You can find little wire twists sometimes, which were used to hold the pins in groups when they were sold. I have not found one so far. 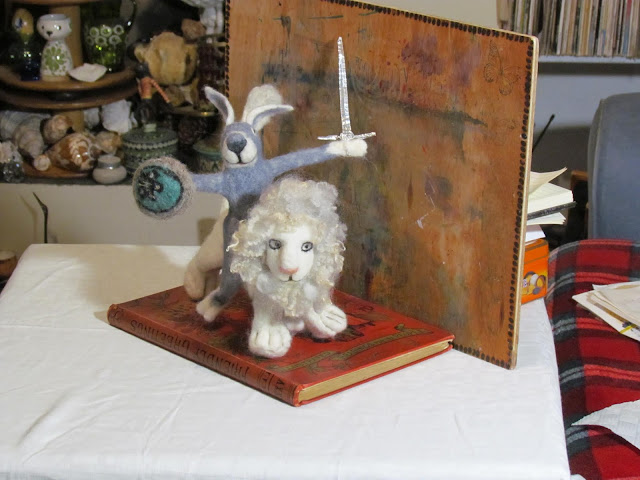 My friend Clare is a historian and introduced me to medieval marginalia. These are the strange and often quite obscene little drawings that monks made in the margins of texts they were writing. They remind me of naughty school boy doodlings, but with more artistic talent. Not all of them are rude however, and a lot of them have rabbits wielding swords. My idea involved making a suitable receptacle for some of my possibly medieval pins. I intended this as a present for Clare for Christmas, and just about finished it in time. 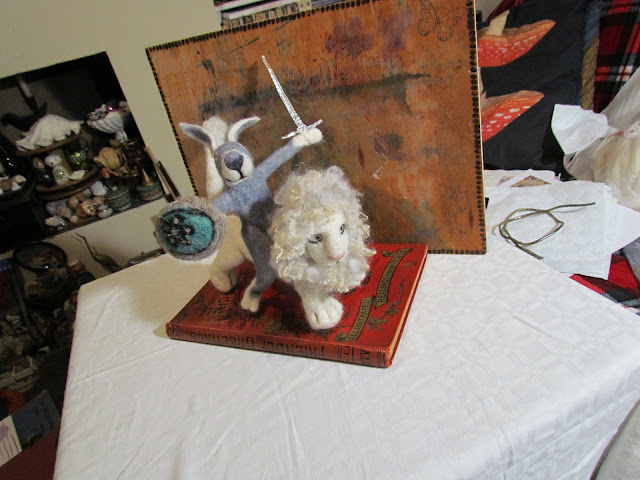 I was pleased with how it turned out, and really want to make myself something similar, but have not got around to that yet. I had forgotten about it until the other day when I was looking through photos on my big camera. I didn't want to share it at the time I made it in case it spoiled the surprise! 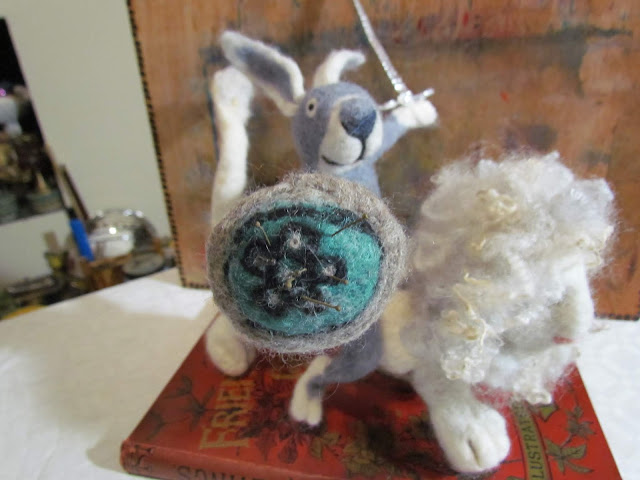 The lion has a wire armature and is slightly pose-able. The rabbit does not. The sword is made from the silver side of coppery art metal. 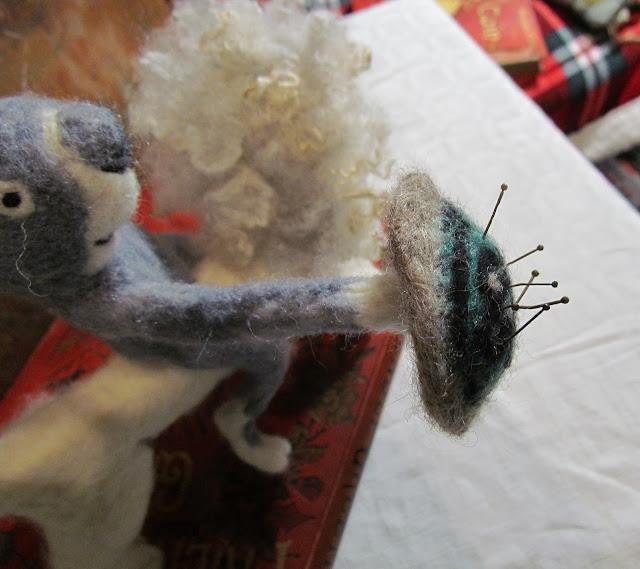 The heads of the pins are wound wire which was then soldered on. So much work for such a  tiny object. 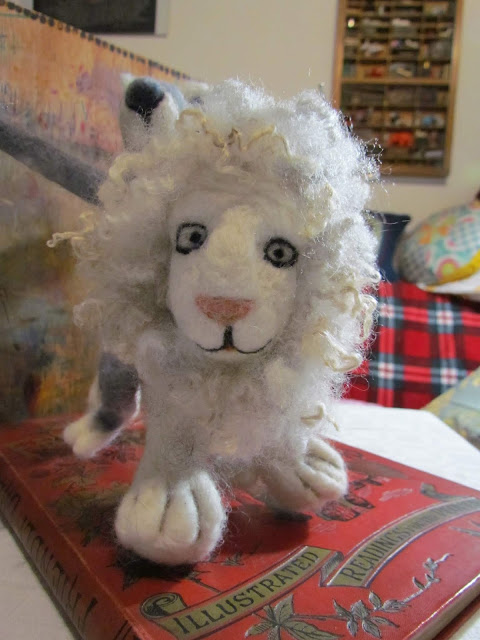 I had the perfect curly locks of wool for the lion's mane. 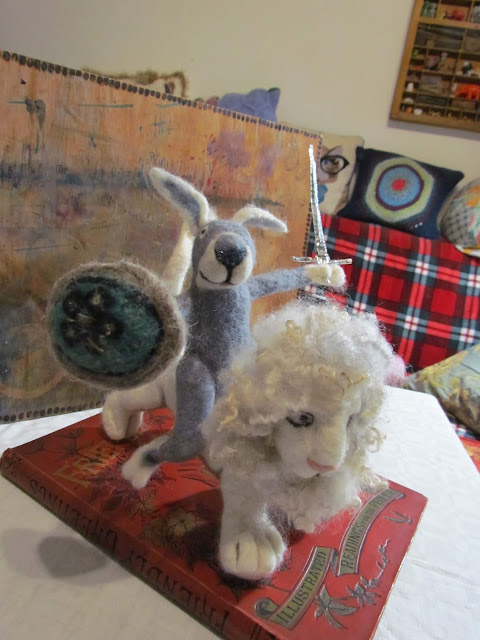 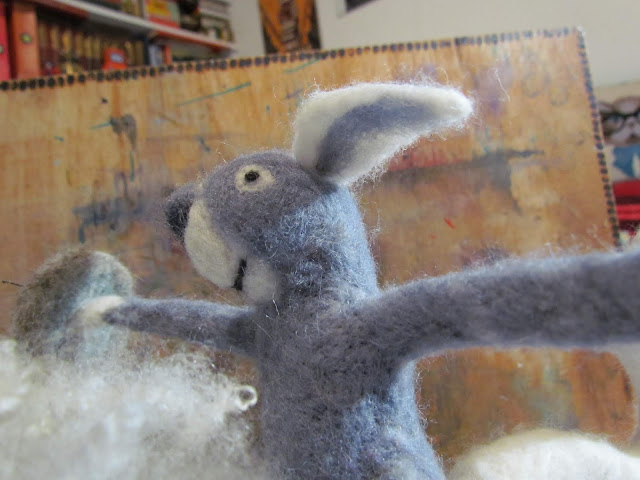 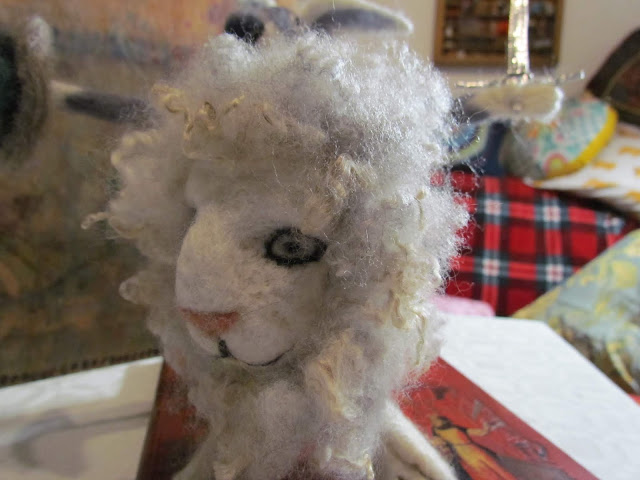 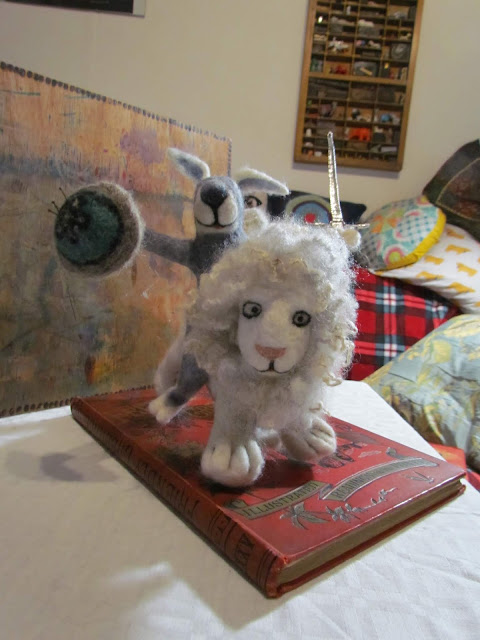 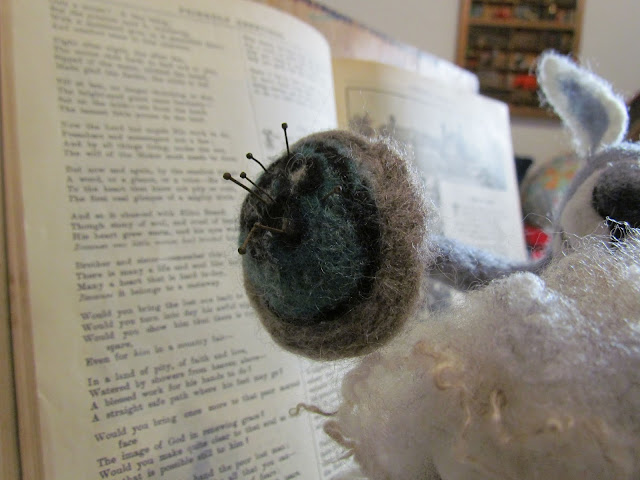 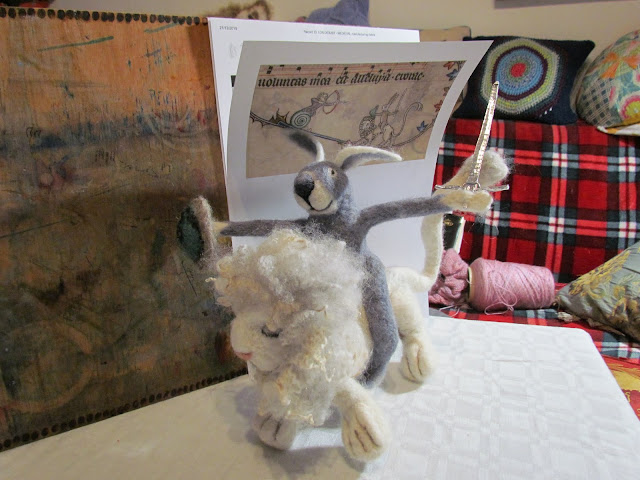 Snails often feature in the marginalia too, though this one seems to be a snail boy. 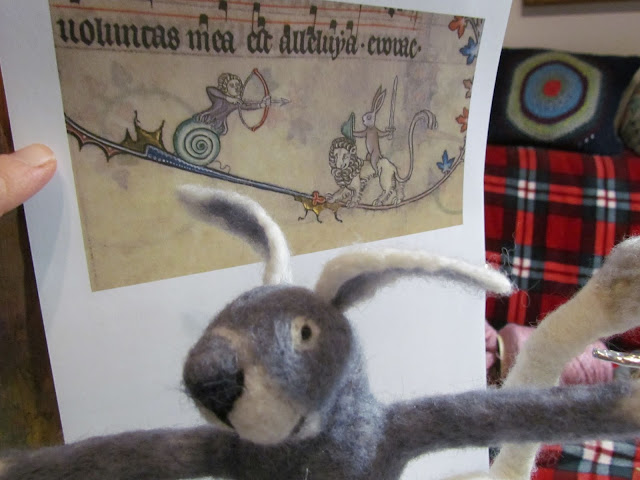 Pin cushion shield!!!
Ha-hahahaaaa!
What a hilarious, brilliant interpretation of that medieval illumination.
LOVE IT.

Rabbit & Lion seem all-in, with their happy, wide-eyed expressions,
and standing on the "Friendly Greetings" book.

Will you make a snail boy now? His arrow could be a pin too.

Those pins are amazing.
I think about what marvels tiny, now-everyday things like paperclips are too, when I'm about to casually throw them out. (And then I don't.)

I want to see all your goodies in the background too... tempting glimpses...

Beautiful work! I never knew about those pins. It's amazing what you can find lying around in London!

So astonishingly good, as usual! That took some serious hours of poking! Lucky Clare! LUCKY!! The little pins are amazing, and how you could spot them even more so. Glad you went through your photo to find sir Rabbit and magnificent Lion! Wonderful

Your warrior Rabbit and Lion are amazing. Love the detail. We are safe here in the BX. Doing our best to live as normal as possible with all that is going on.

How lovely! Your friend must have been delighted. The lion's expression is wonderful and the rabbit looks set to take on anything and anyone.

Hi All,
I might make a snail boy Fresca, and I will take pictures of some of my stuff at some point!
Thanks Steve, Linda Sue, Shell and Janice. Take care all!