A Red Reindeer and a Tale of Two Gas Men

Christmas wouldn't be complete without the boiler breaking down, or at least playing up, so we were not surprised when it did-play up then break down. It started with a leak, followed by frightening clunks and gurgles, and we didn't risk using it after that. Andy is very sensible and has taken out a service insurance thing with British Gas, so a man came on Saturday. A very taciturn man. He probably said about ten words the entire two hours he was here, speaking only when spoken to, and at the end of the appointment when he had to. He put in a new pump then gave us a quote for a part it needs, then made an appointment for Monday to fit the part. The appointment window is a big one-from twelve to six. I had six hours of uninterrupted crafting time because nobody came. 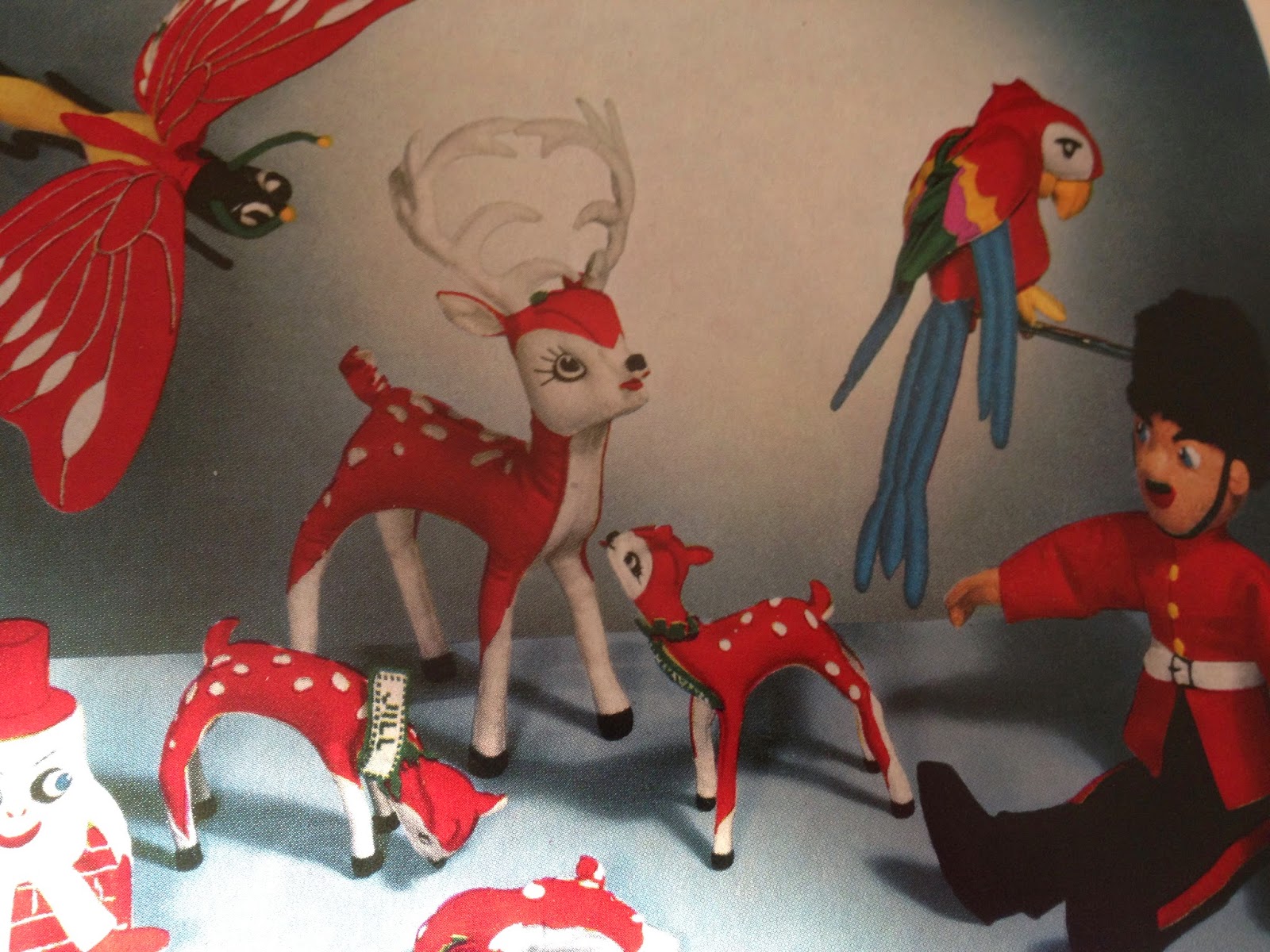 On Saturday, after the gas man had gone, we visited my brother. We had a quick tour of the second hand shops where he lives and I found a great book in the second hand bookshop. It is called 'Modern Soft Toy Making' by Margaret Hutchings (1959) and is full of great looking toys. I loved the reindeer so decided to make that one first. It is actually quite complicated. It started with the antlers which were done in the evening. The rest of it was mainly done during the six hours. 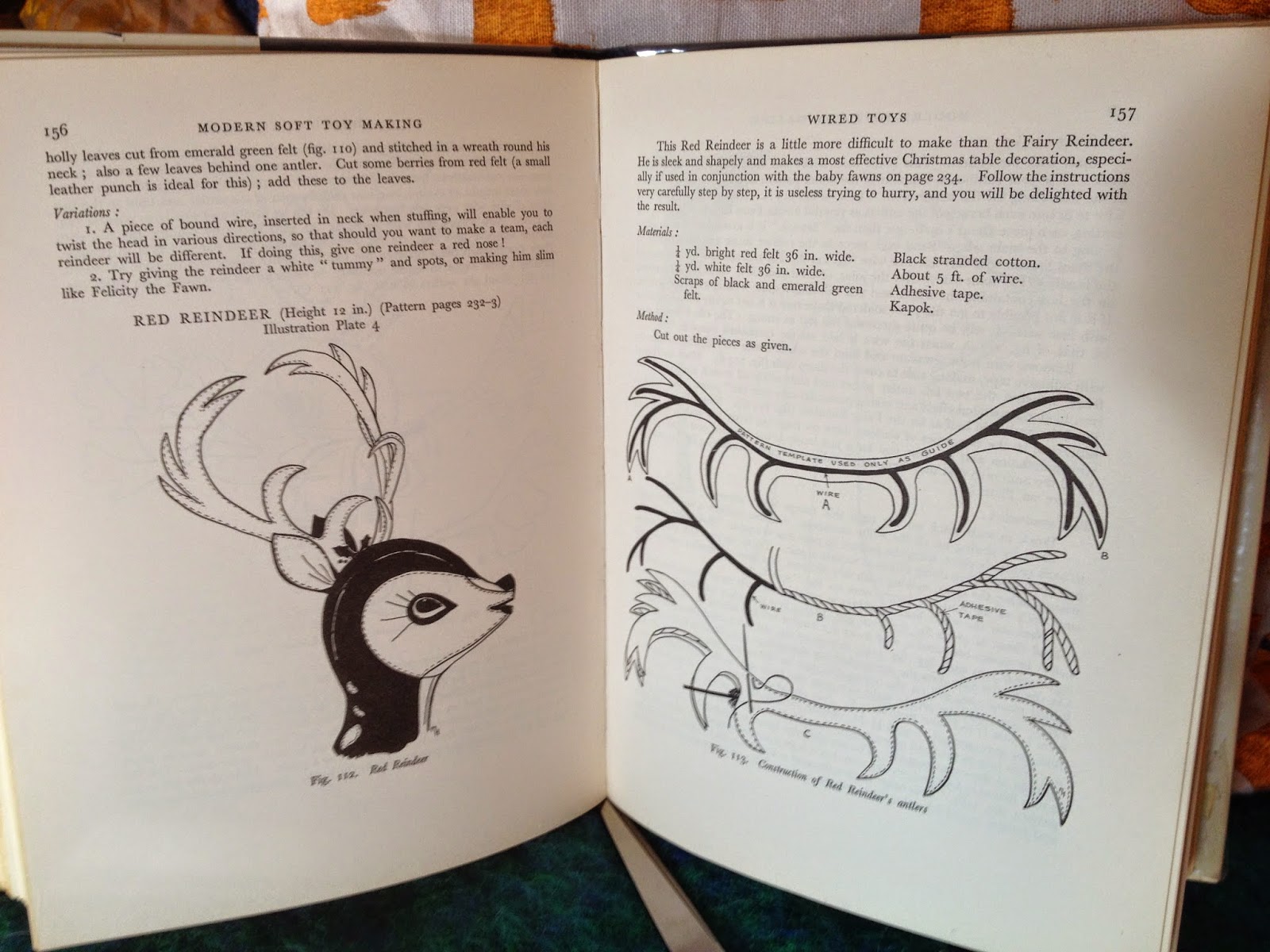 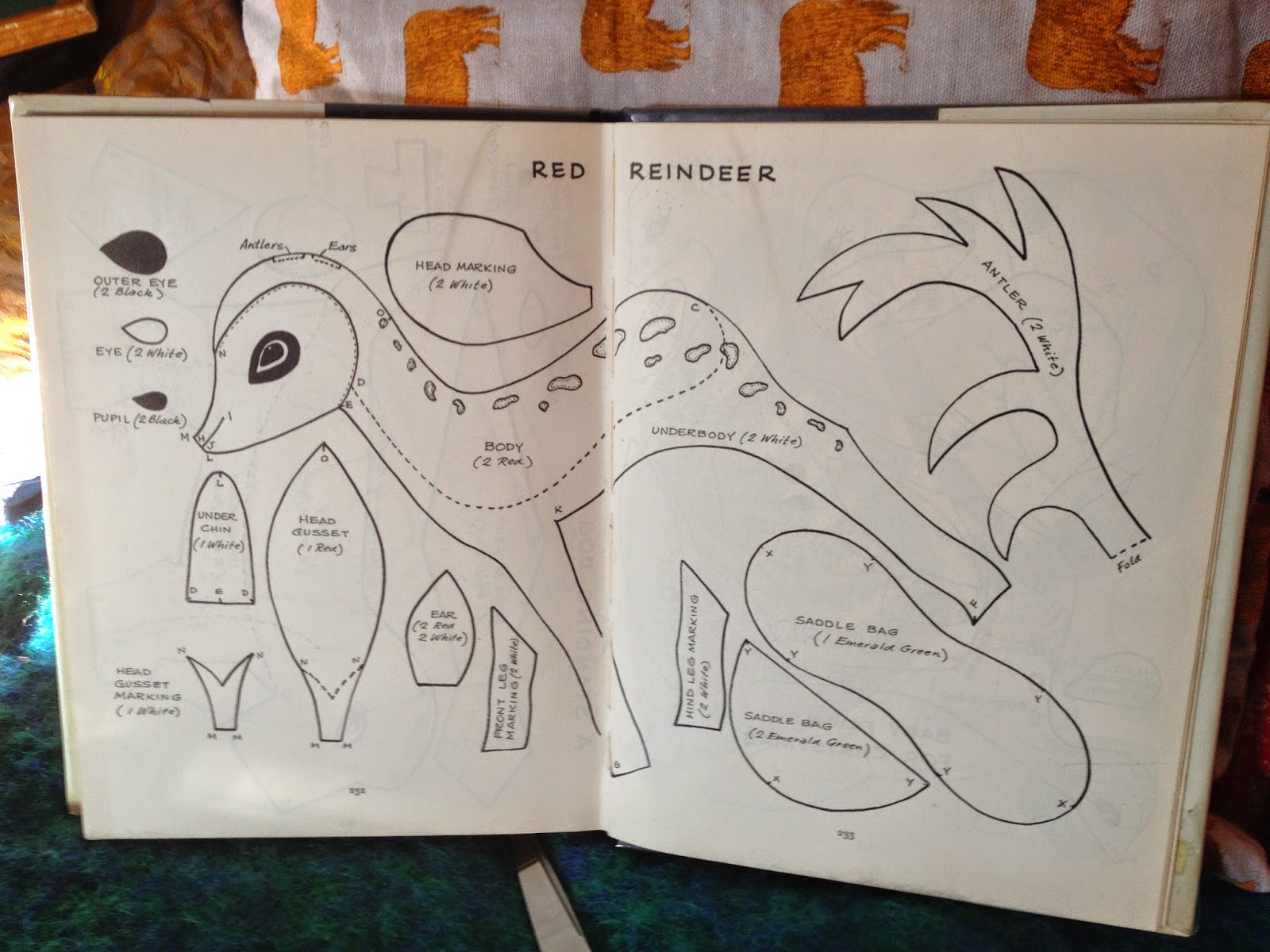 The construction of the antlers used up some of my fuse wire hoard. 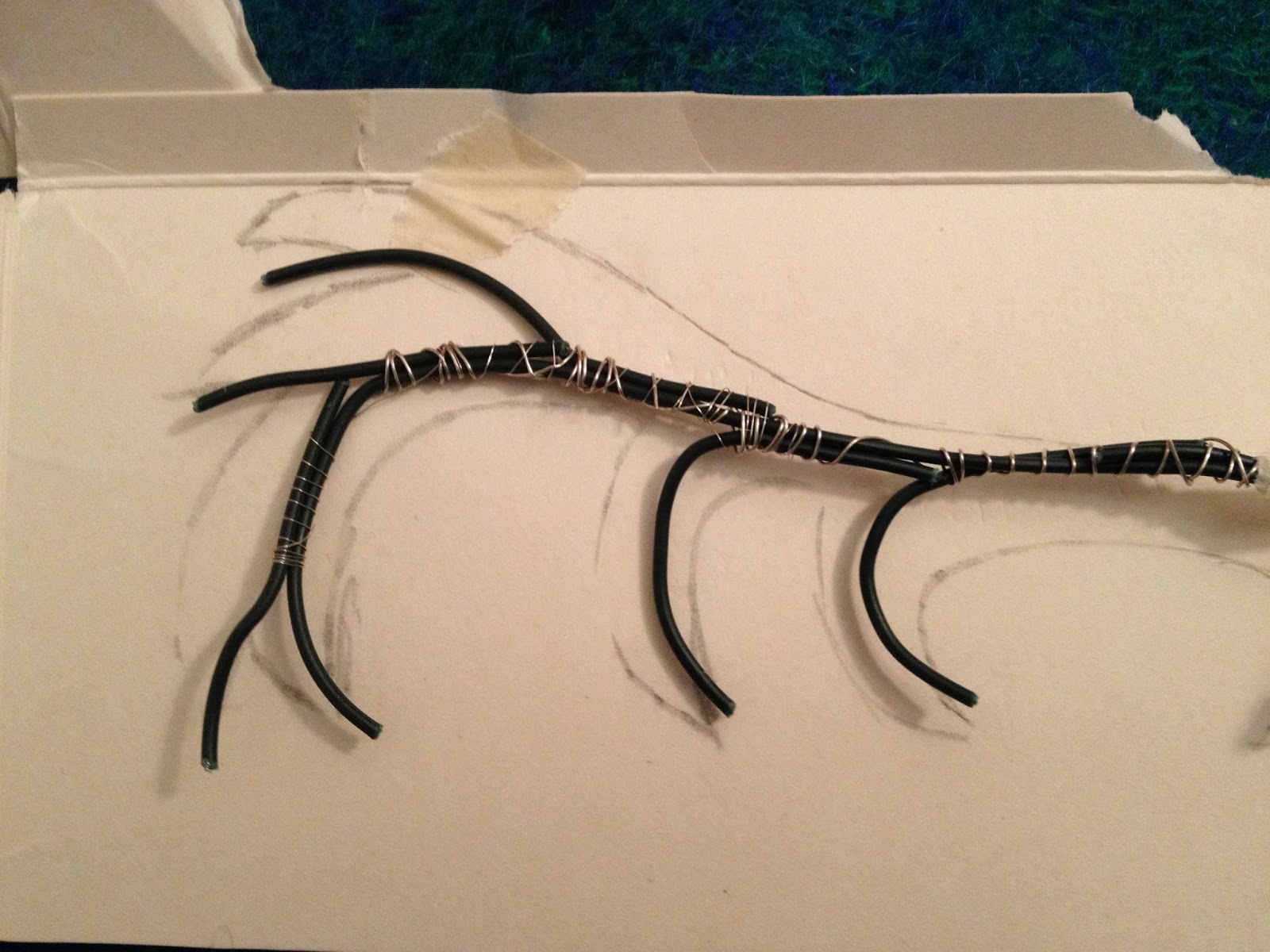 I chose a soft pink felt for the white parts as I didn't have much white and I preferred that colour combination. 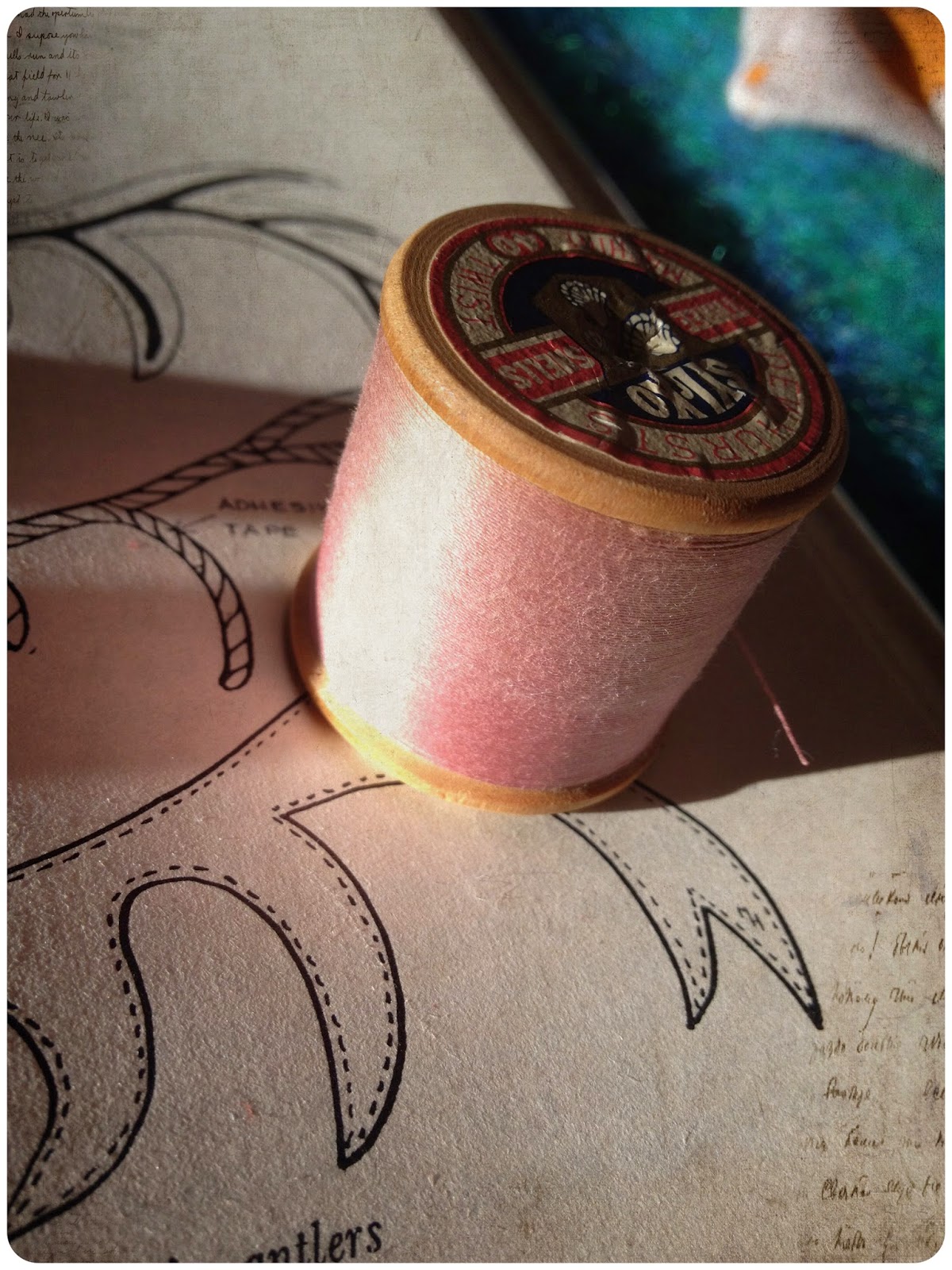 I have watched loads of films whilst making the deer-some Christmas favourites such as 'Goodnight Mr Tom' and 'Eight Below', interspersed with a little Bond and three scary films-'Godsend', 'Quarantine' and 'An American Haunting'. My brother gave Andy most of his DVD collection for Christmas. The idea is that we can watch them then sell them. (And he has got Netflix so doesn't need them anymore) There are some scary films in there, along with some less scary ones like 'My Fair Lady'. 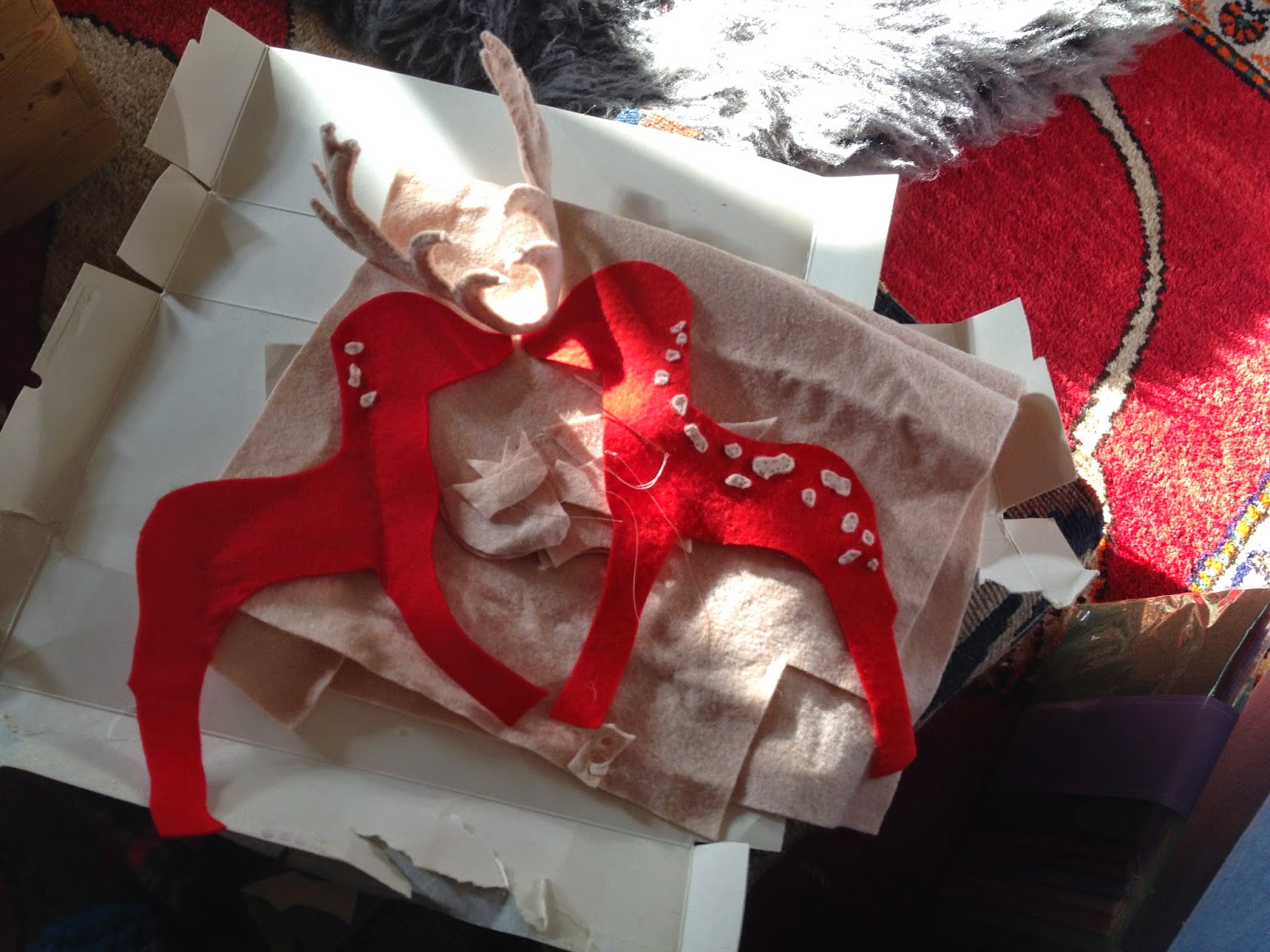 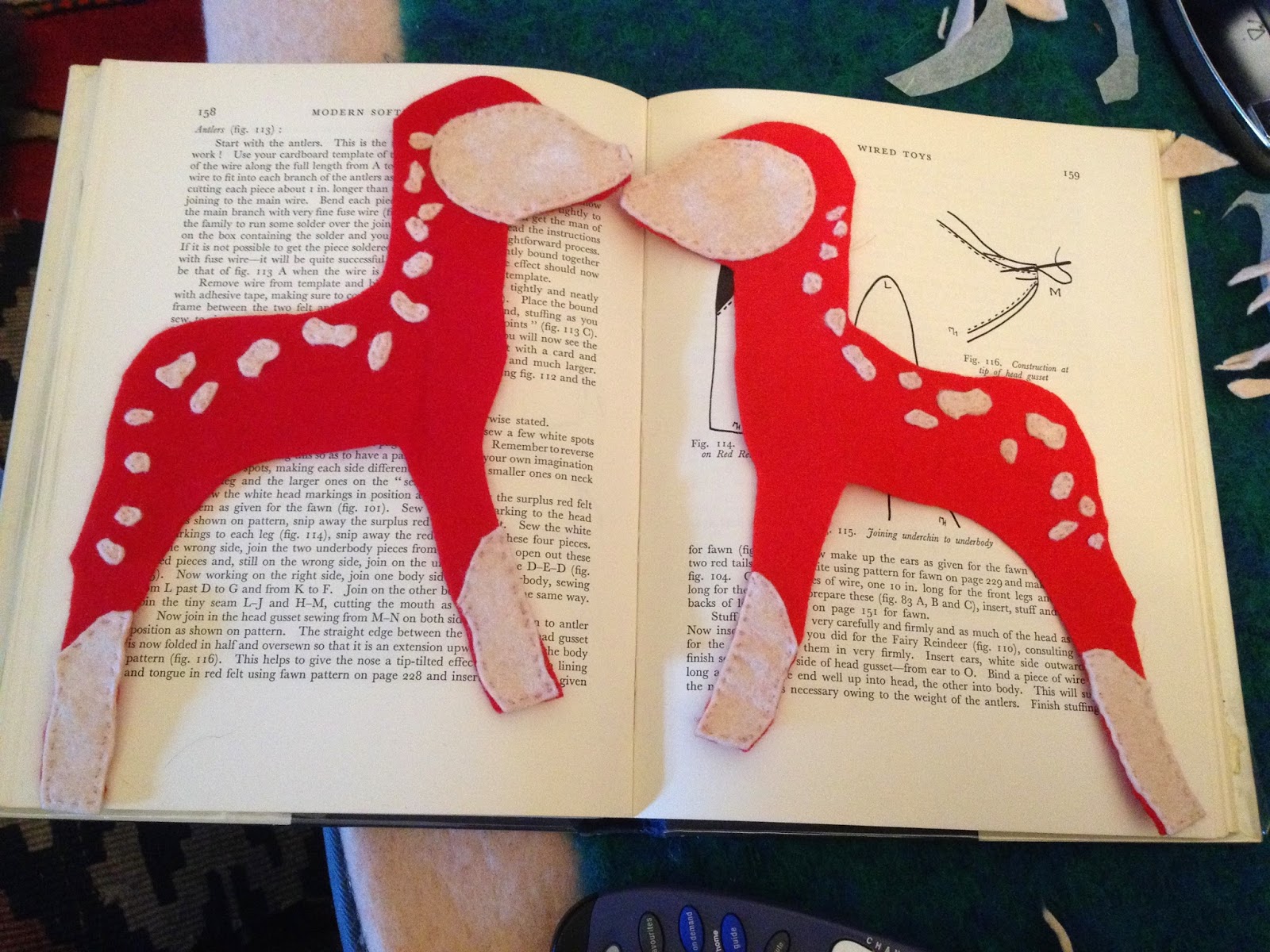 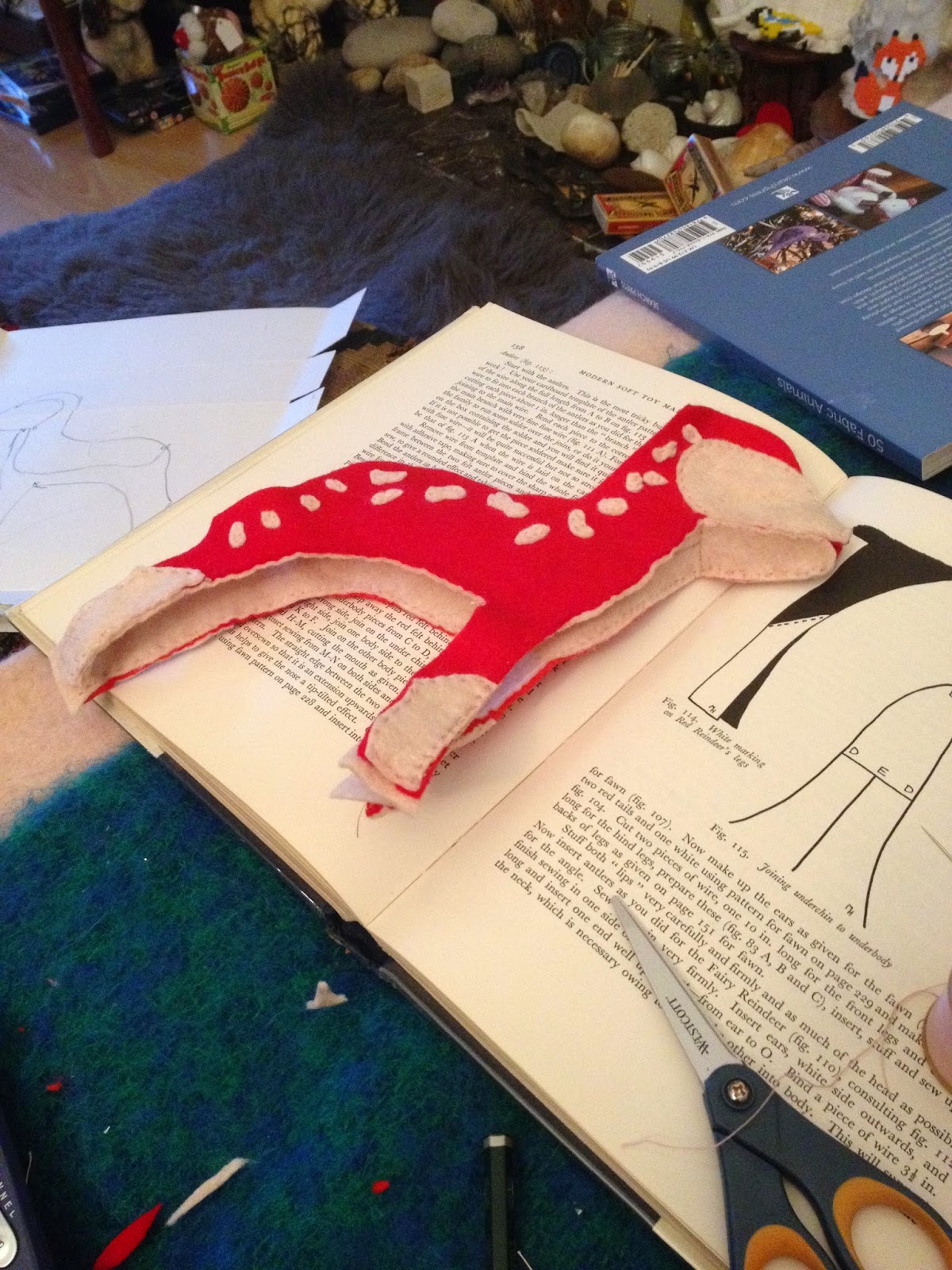 It is a messy business-lots of tiny bits of felt and fine felt dust all over the sofa.
But I don't care about the mess because look at the reindeer! I am so pleased with him! 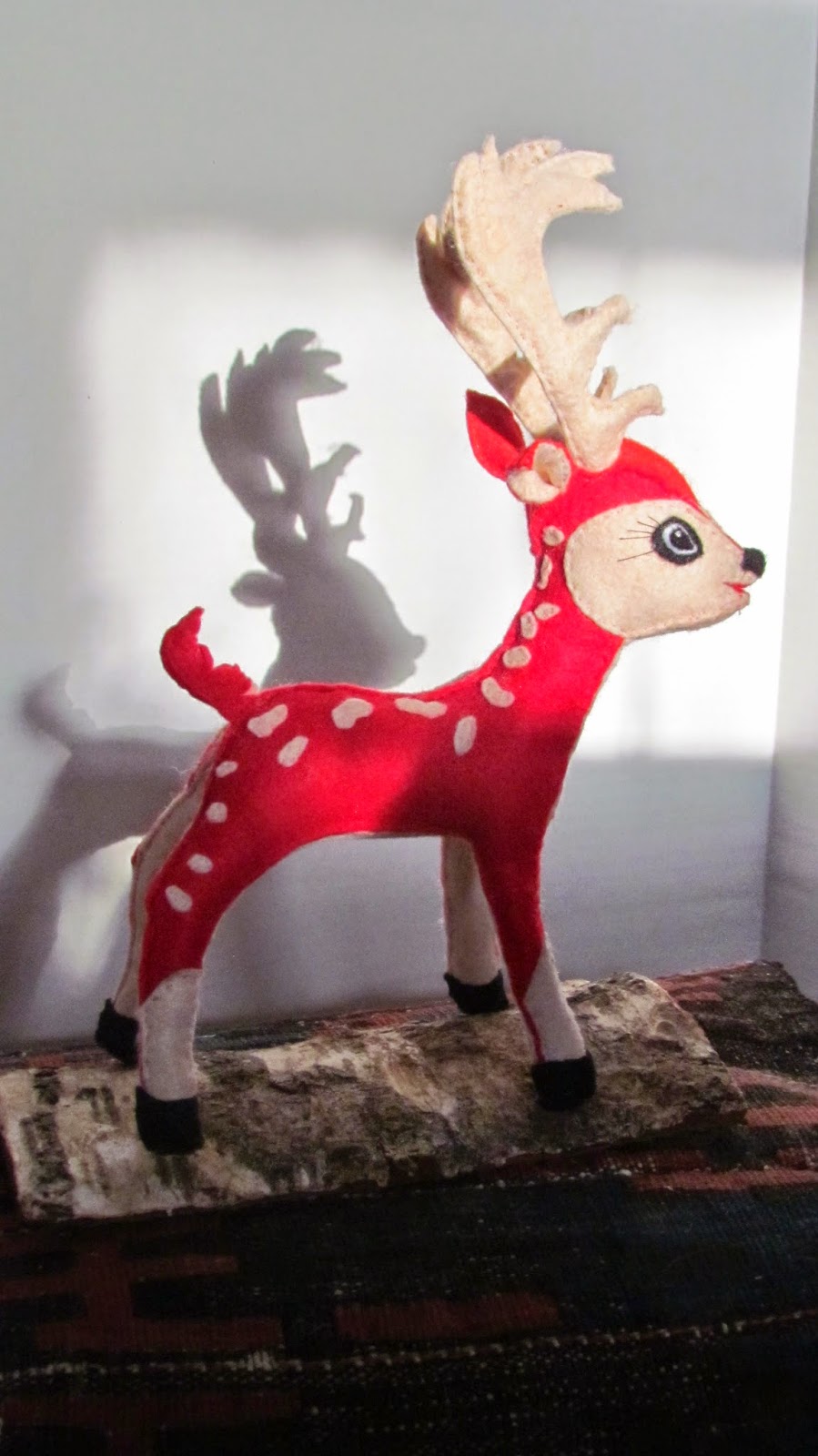 It was a sunny morning so I took some photos of him standing on birch bark (thanks Malcolm!) 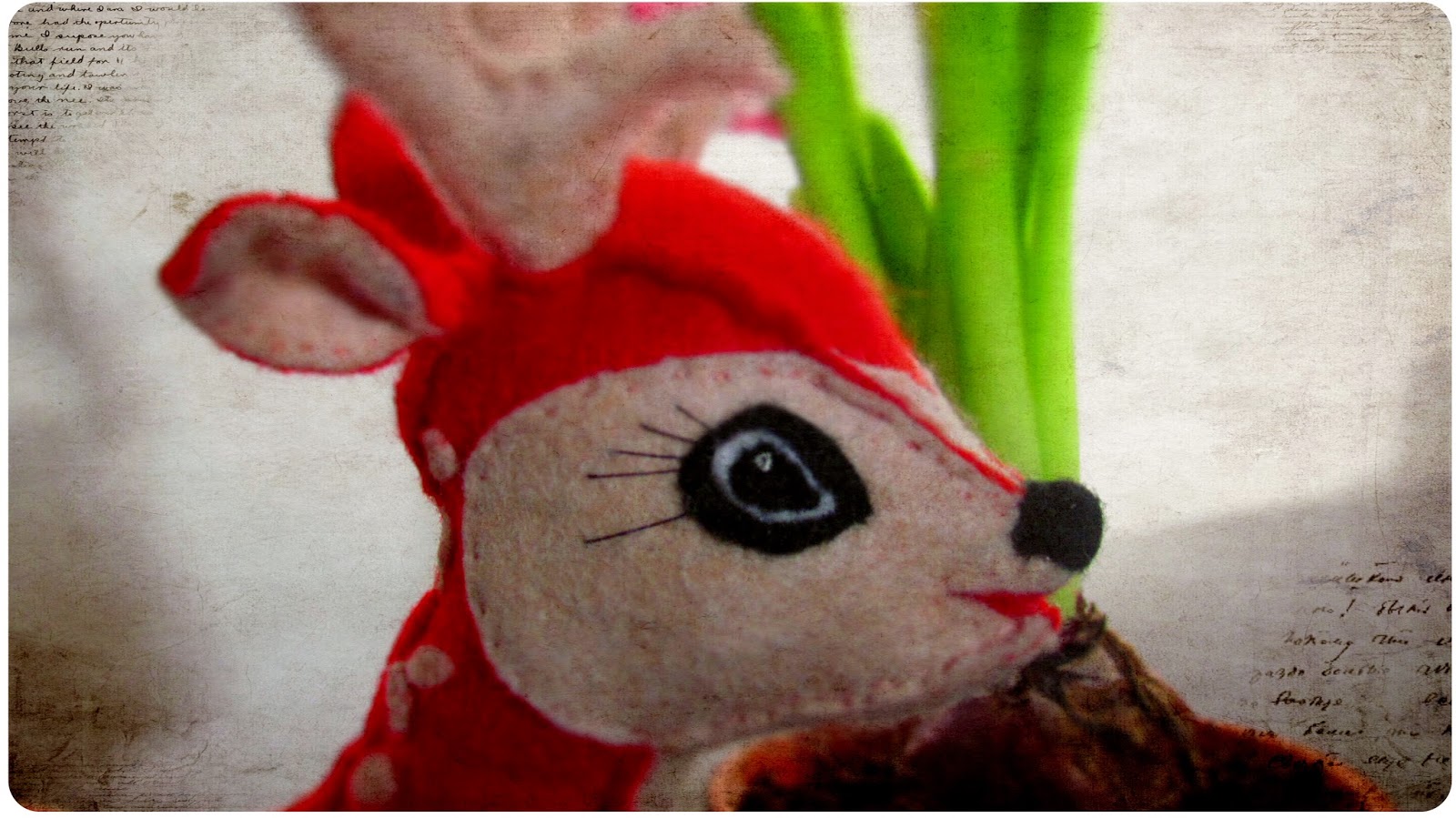 He was happy on the bark and liked the hyacinth, even though a tree would be better. Perhaps I should take him on our next visit to the woods. 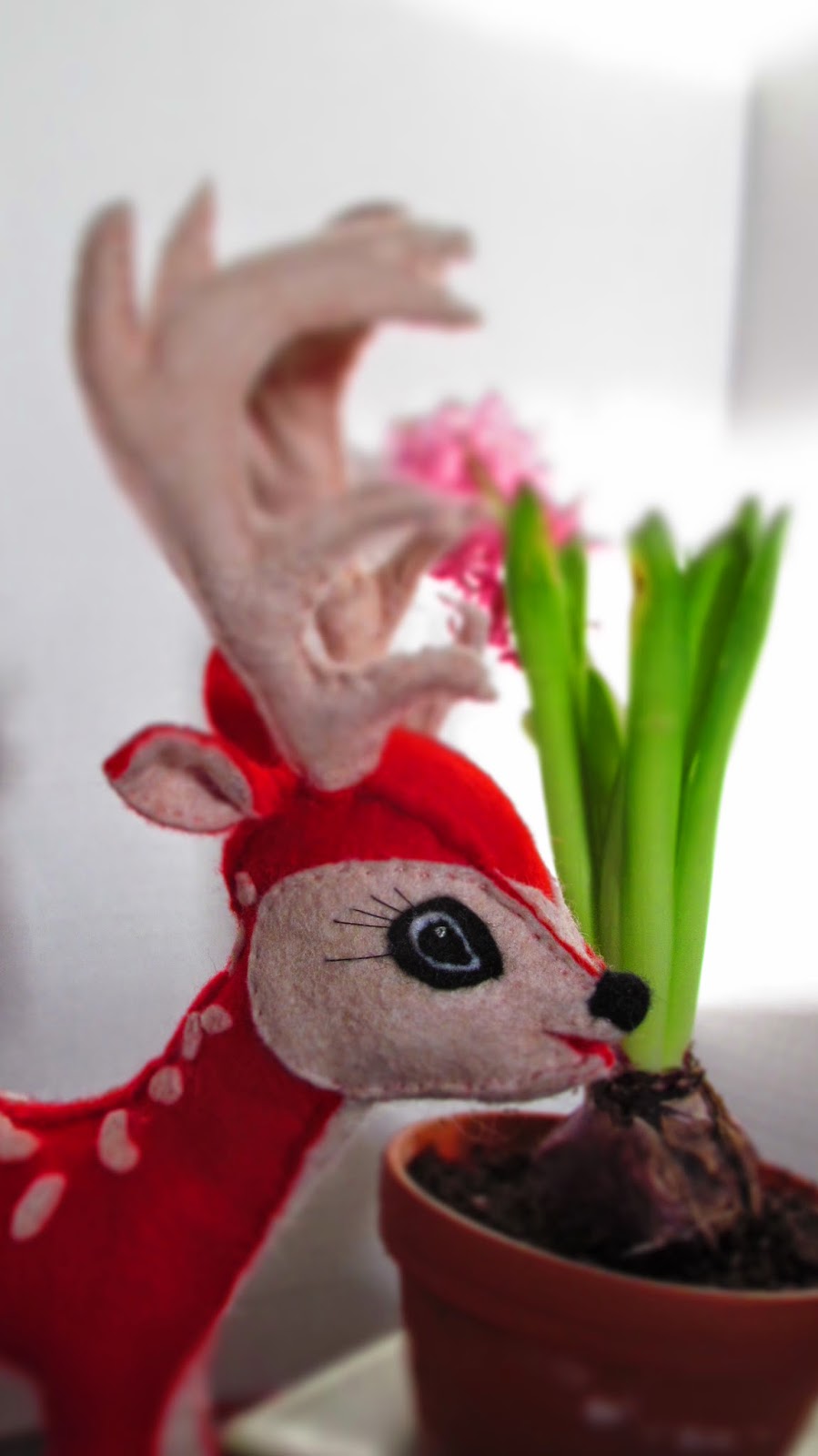 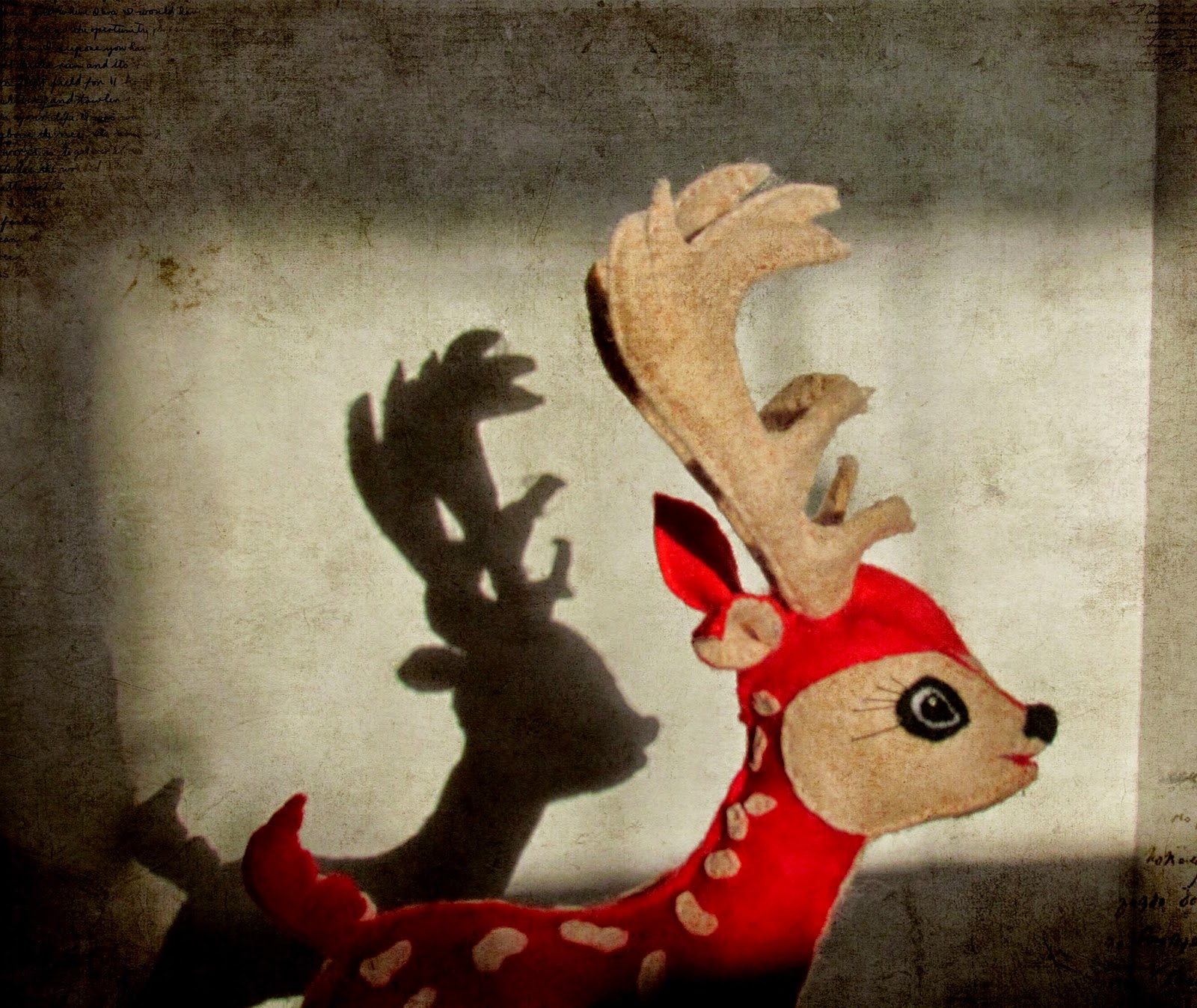 P.S. I forgot to tell you about the other gas man. I rang up yesterday as the boiler started to leak again. I told the nice man on the phone about this and about the fact that the other engineer didn't turn up. He said the booking was not completed on the computer. He booked me another engineer to look at the leak today. Twelve to Six again but this time he did turn up-after five but never mind. All he had to do was to tighten a valve. Then he stayed and chatted for about fifteen minutes whilst doing the paper work. Whereas the other man stood and looked around with a very suspicious look on his face while Andy was signing off the job, this man looked around, saw a tin of pencils on the table and said ''Artist?'' So I said yes but also a teacher (briefly explaining about supply etc). We then had a very quick but in depth conversation about his wife who is a teacher which managed to encompass the fact that her school had a new head and she had a similar situation to me, but had managed to get a job. He briefly described his many jobs. Then he spotted a power ranger and a C3PO head which led on to his interest in comic books and how he is an artist too. He has been to a couple of comic book conventions, at one of which he dressed up as Silent Bob. I had never heard of Silent Bob-so this led onto talking about 'Clerks' (incidentally one of the films in my brother's collection). Ben the gas man also has a working light sabre which he is currently having customised to make it even better! He was great!
Posted by Sarah at 10:22

I love your reindeer - he is smashing! He's turned out wonderfully well and it's so nice that something has been made from the old book.
I enjoyed your gas man stories too, especially the second one.
Happy New Year to you!

Your reindeer is wonderful! Looks like a cool plush toy to display now.The other gas man with a working light saber is too cool. Happy New Year, Sarah.

oh my goodness, this is adorable, it turned out so good! I want the recipe, i mean pattern ;-)

you could even take a photo and use it for next years holiday cards.

wishing you a boiler that keeps you warm!

I love your deer, although he looks as though he was fiendishly difficult to make! Crafters obviously had a lot more free time back in the 1950's - no blogging for one thing! He was well worth the effort though!! I hope the boiler is now sorted and that if you have to have another boiler person out they are as friendly and nice as the second one - we always get the first sort, or an even ruder kind! Anyway, I will stop now and wish you a happy new year!! xx

Your Deer is so fabulous I just about collapsed. That is difficult, I have tried to make little deer, hand stitched, but they are not as wonderful as the one you have made...you are genius. The gas man is hilarious. Silent Bob !!! LOVE THAT!

That is an AMAZING deer! I can't believe you made it! You are so talented.

Jay and Silent Bob are hilarious. You definitely need to check out "Clerks" as well as "Dogma" and even "Jay and Silent Bob Strike Back." (I haven't seen any of them in more than 10 years but I liked them all when they first came out.)

Why is it so hard in London to get delivery and repair people to show up?