I have been to a  school in Dagenham and a Harris Academy in Stratford so far this week. The class I had at the first school were the most tricky I have had so far, although not a problem. I felt it was the fact that things just did not seem too organised there. Also we had an assembly for half an hour which is such a long time for Reception children to sit still. It was given by a man from CAFOD and was about food waste and distribution. The one fact I did get from it and will act on is that when you buy the furthest sell buy date in the supermarket, but you are going to eat it much sooner than that, then you are contributing to food being thrown away by supermarkets. I often buy food with the longest sell buy date on it-no more! The reason I only took in this one piece of information is that I was far more interested in watching the TAs and teachers telling off (in quiet but scary whispers) and at times removing certain children from the hall. (Who couldn't cope with the long assembly) Lunch time was extremely noisy-to the point that I couldn't have spent longer in the hall than it took me to walk across it. At home time we all went into the hall and sat in rows whilst parents called the names to the TA or teacher. Again, noisy. Also it was a very long walk to the school from the station. 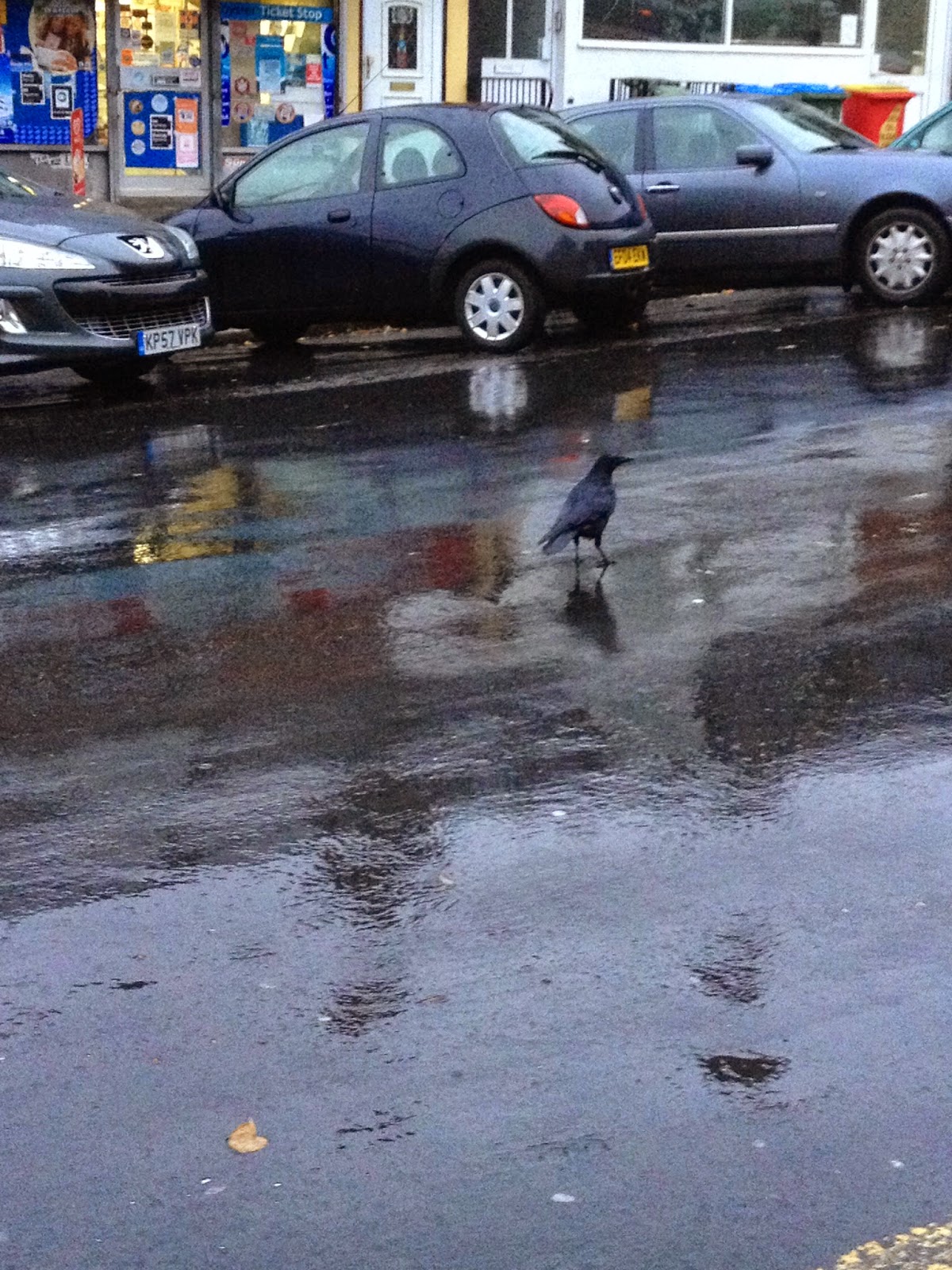 On the way to the bus there were two crows pecking at things on the shiny road. They looked beautiful. This one was just getting suspicious and starting to hop away when I took the photo. 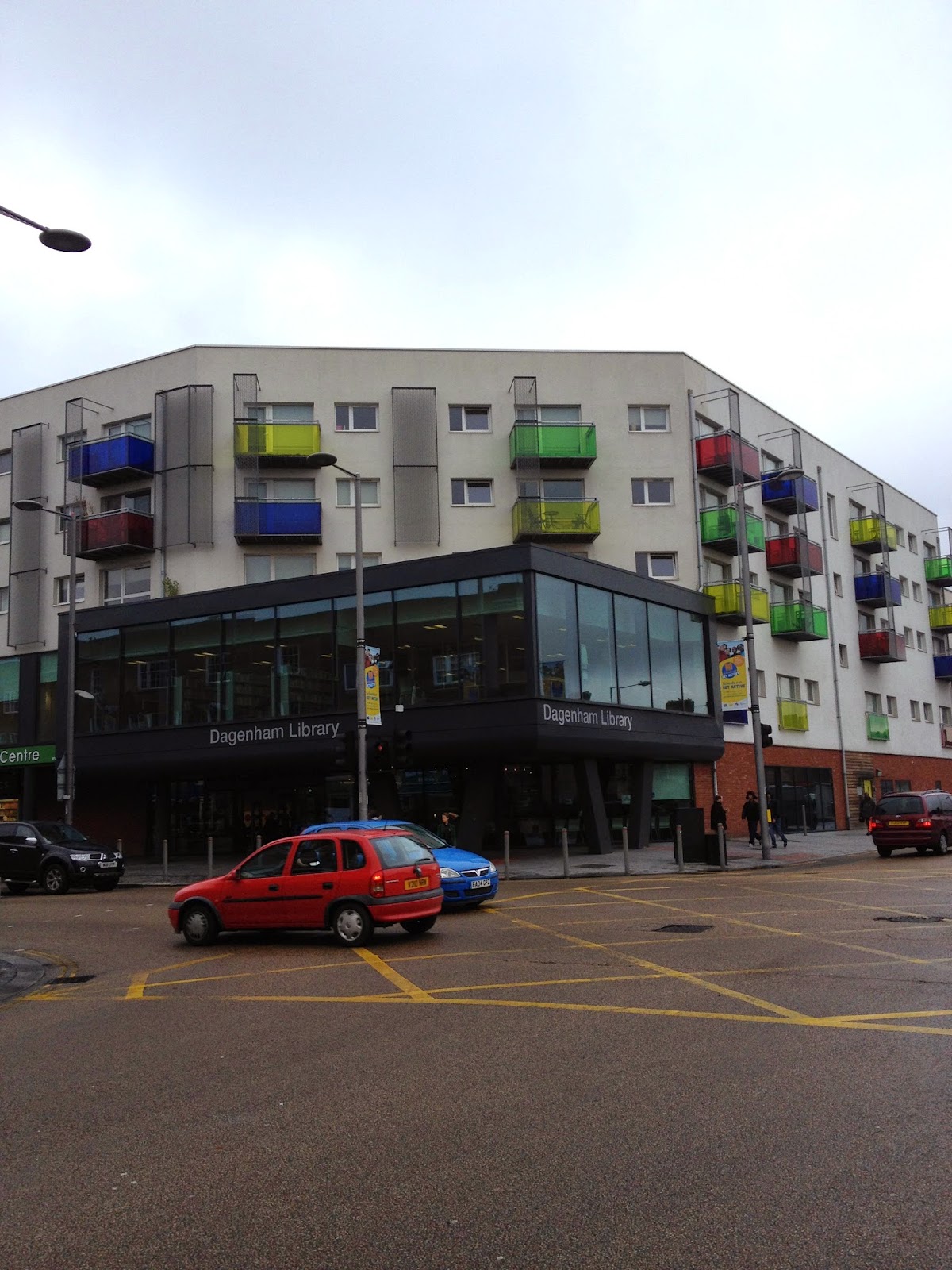 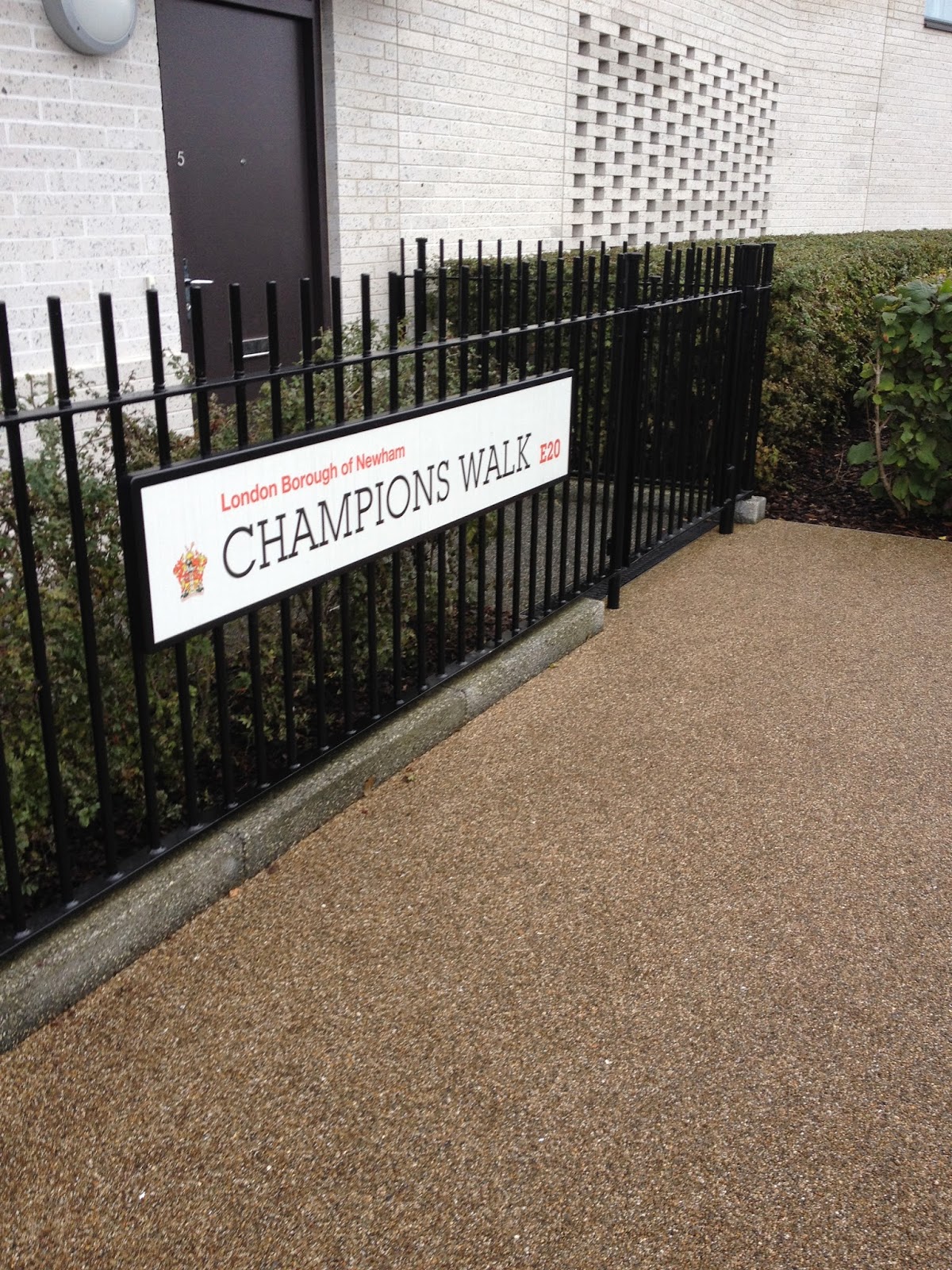 The school today was built at the time of the Olympics so all the streets have names such as Cheering Lane, Champions Walk and Medals Way. Not much imagination there. I got to Stratford and realised that the google maps on my phone does not work there, and did not recognise any of the streets. The directions I had been given were not good. Luckily I was very early so it gave me slight panic time, then time to work out who to ask. Taxi drivers! I asked one and he sent me in the right direction which was over the foot bridge to Westfield shopping centre. Then there was another taxi rank, and three of them helped me, one by looking at his satnav. Thanks cabbies! Then when I was nearer but still couldn't find the school, a woman helped me and then wished me a lovely day! Thank goodness for real people rather than phones. 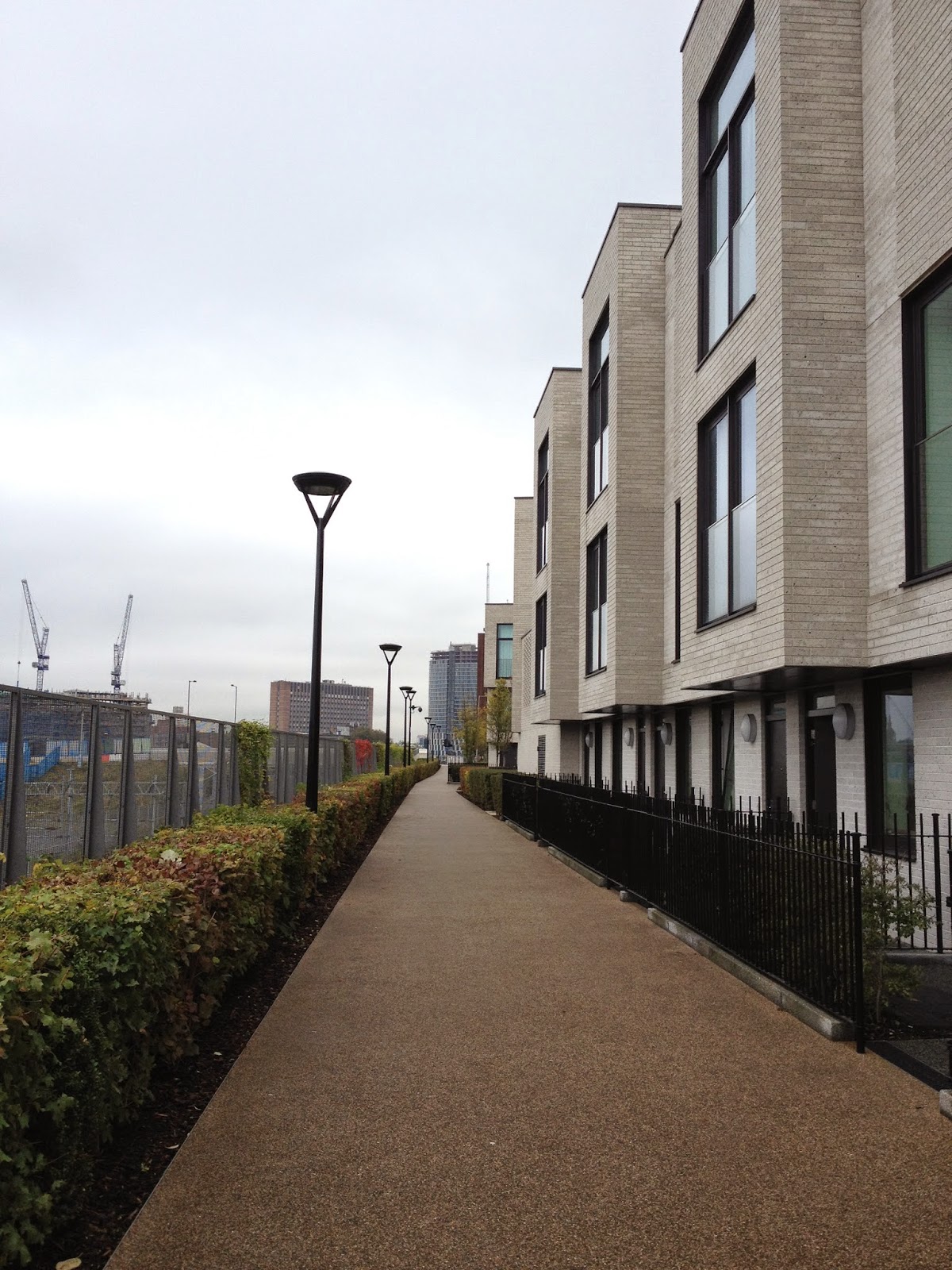 The area is called Stratford City. It all looks like this. It reminded me of holiday complexes I have been to in Spain. It will look better when there are more trees. 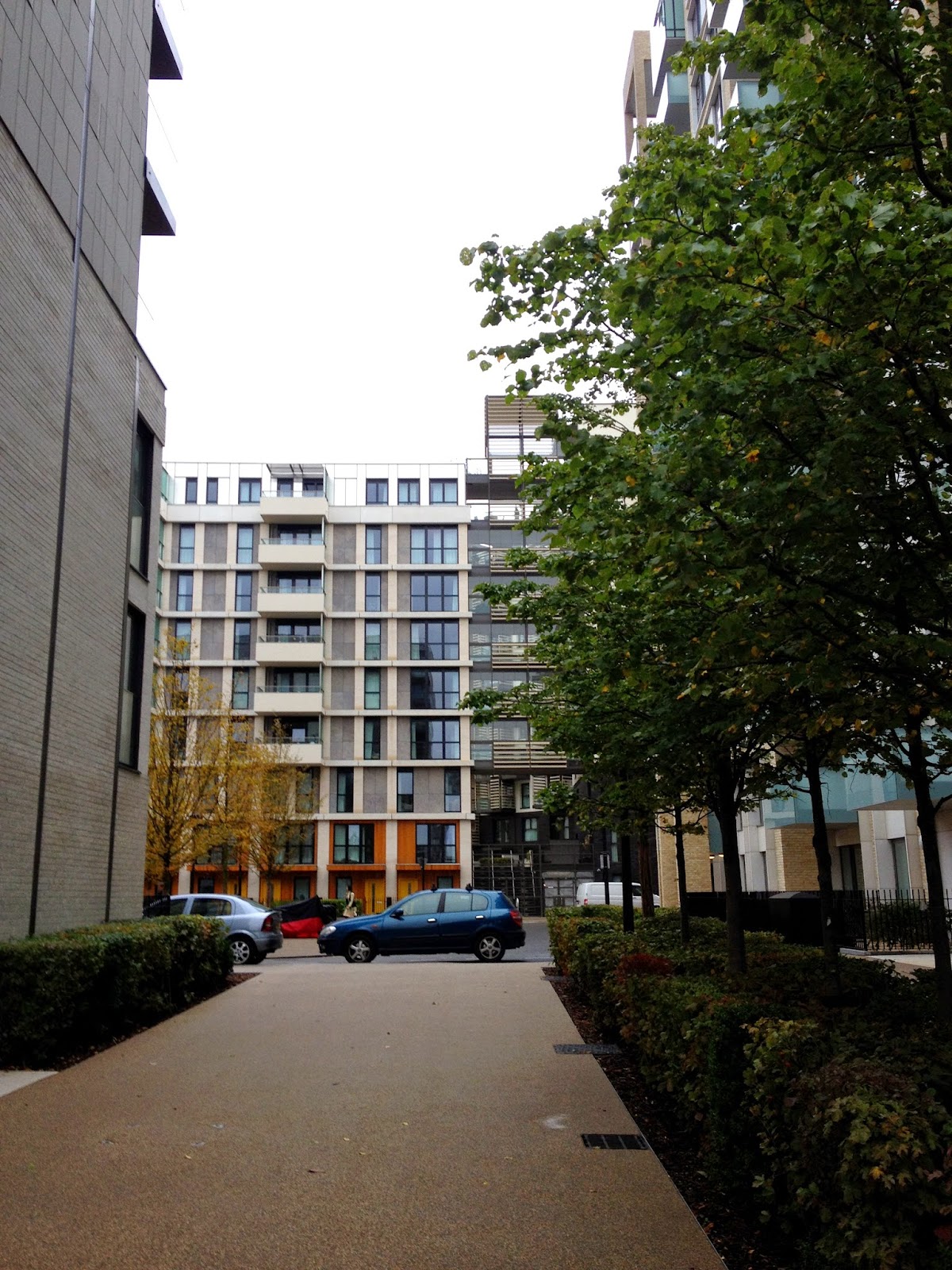 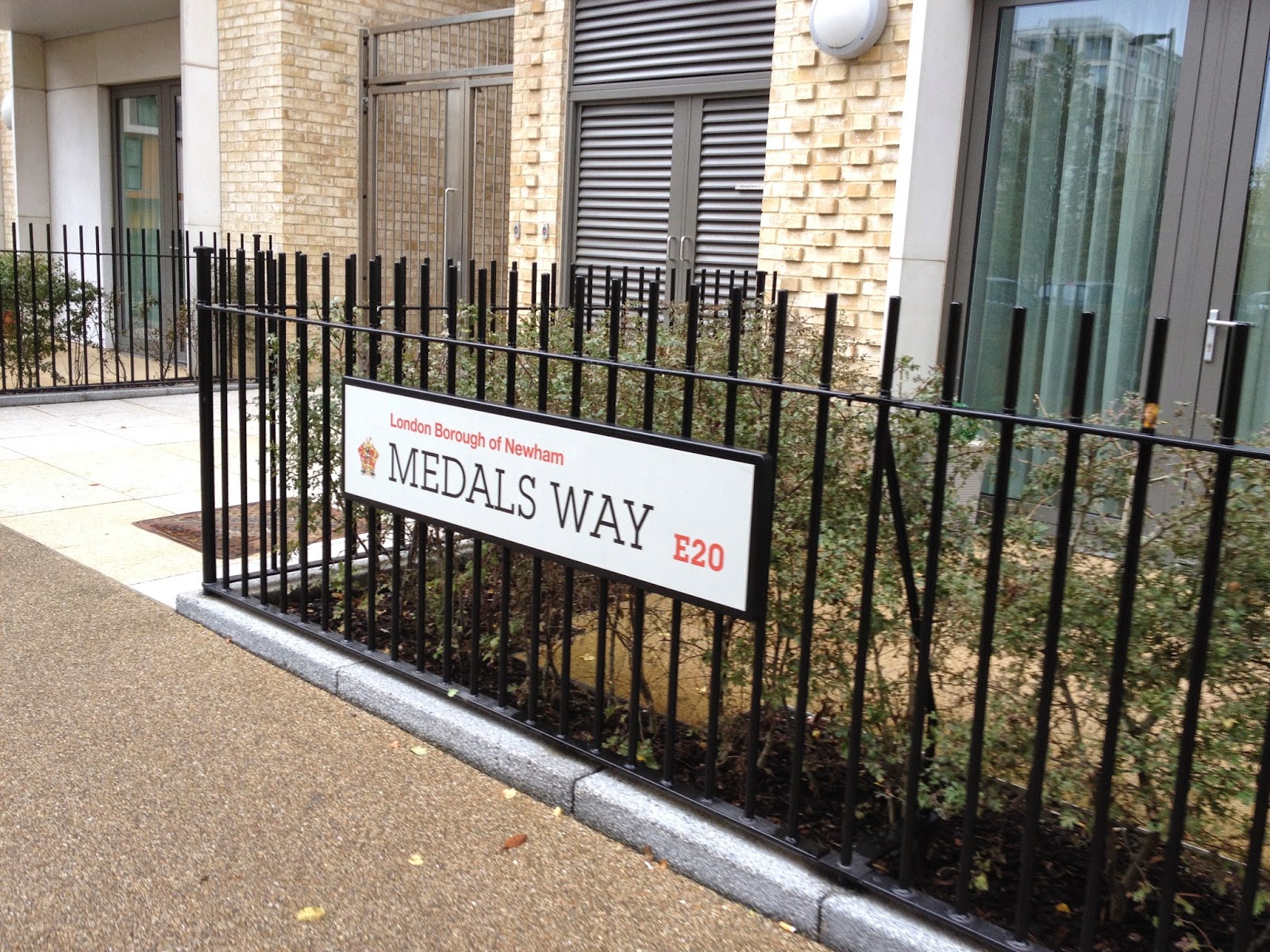 On the building below there are what look like Greek athlete friezes. 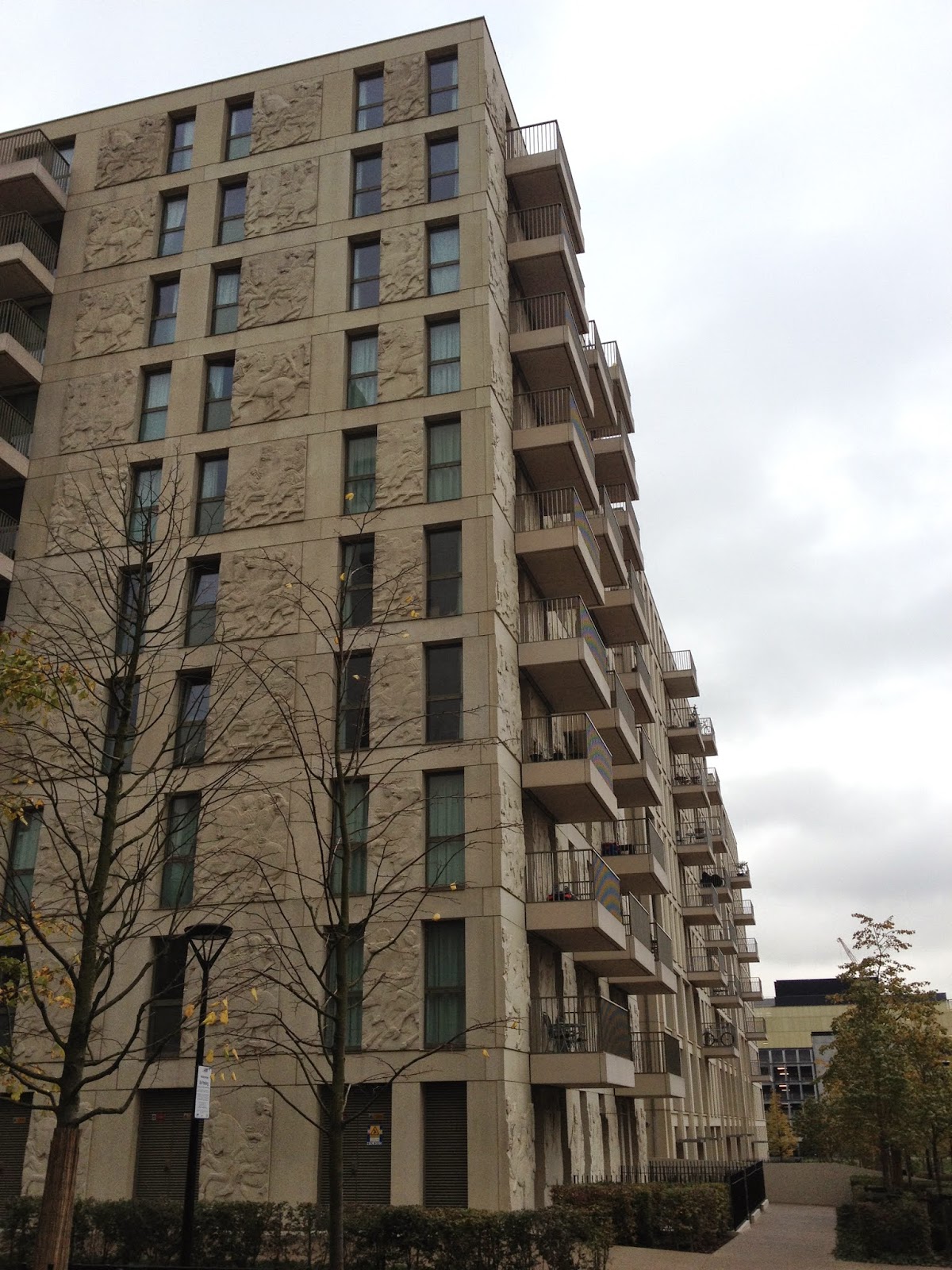 When I got to the school at ten to eight, I went in the Primary entrance, not realising there was a huge main entrance further down the street. I sat there for ten minutes until someone appeared and took me to the main entrance. The children start at 8.30 and finish at 3.40. They eat their lunch in absolute silence.   A complete contrast to yesterday. I think somewhere in the middle would be good! By the time I had waited for them and two other classes to be seated I had 40 minutes left for my lunch. The class were really lovely though and it was very well organised. The TA was also lovely. So it was a tiring day but a good one. Tomorrow I am in another different school near Canary Wharf. I am looking forward to it as the person who booked it for me said it was amazing! I am covering year one. 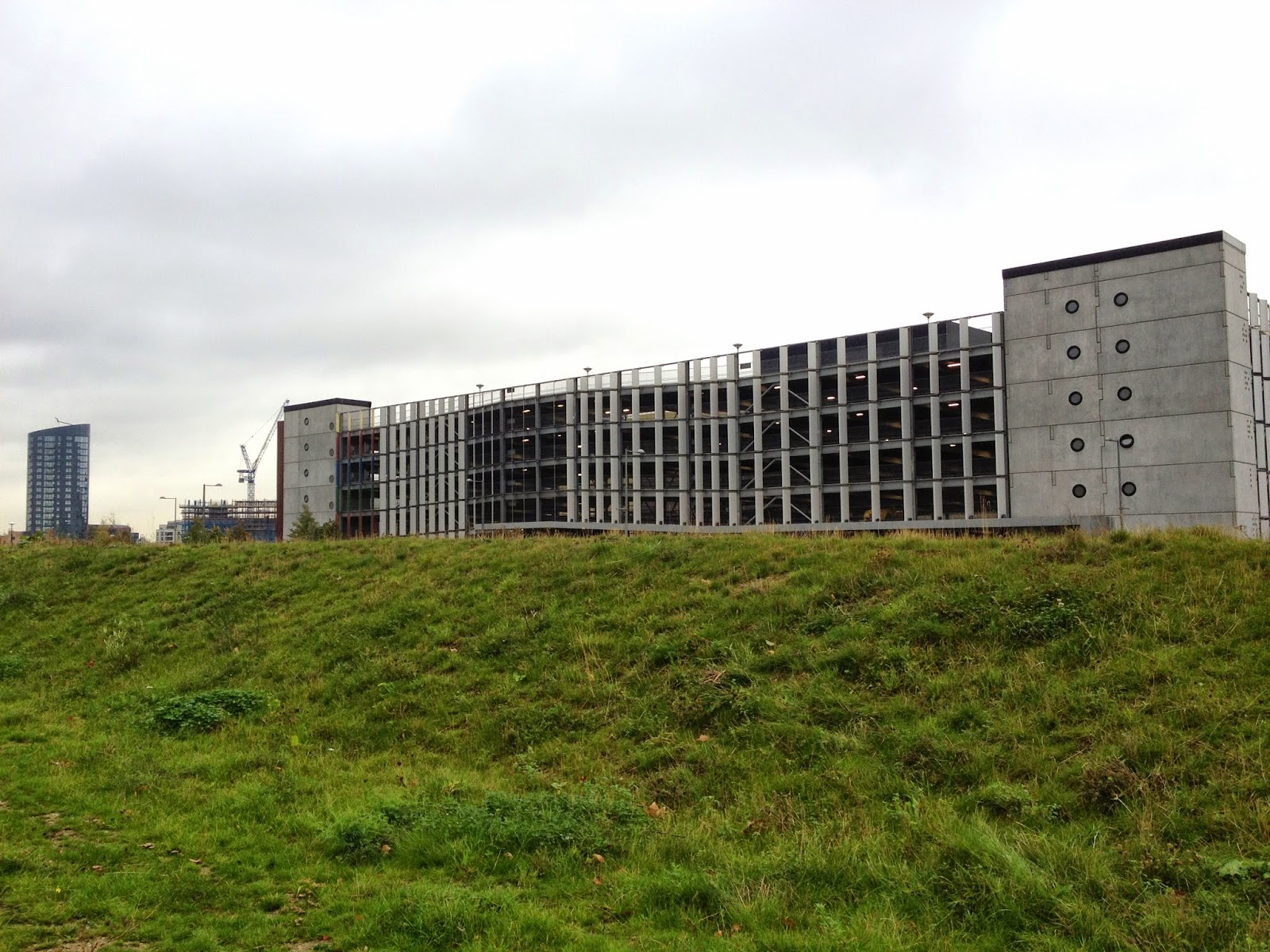 I took this photo on my way back to the station. I liked the way the building undulates like the grass in the foreground.
Posted by Sarah at 13:11

I've photographed that Dagenham library too. It's really a rather dreary building except for the colourful balconies.

I think Stratford City used to be the Olympic village, where the athletes were housed...?

Anyway, I hope you'll contribute your photos to Bleeding London! I don't know whether we have those streets yet or not. Hope your day today is not too noisy!

Talking to real people, at least cabbies and friendly folks of the neighborhood, is usually much more fun and usually useful. Loved your photos.

What a contrast to the two schools. You seem to be getting around a fair bit.