Looking Up and Two Dog Tales

This last week has been quite something. Last Thursday I had a meeting with the new head. This was the first time he had spoken to me in person, apart from a quick visit to Nursery on the morning of Ofsted where he said a few words as he passed through. I was not sure what to expect in the meeting, and didn't realise it was feedback related to the observations he did a few weeks ago. My feedback was not good. In fact it is the worst feedback I have ever had, and contained nothing positive. I am not going to go into detail but I was pretty devastated. When I had time to think about it I don't actually agree with most of what he said, and am also amazed that he can form an opinion of my teaching on so little evidence. I was told that I would be put on an informal support plan next half term to make improvements. After a very miserable weekend from the shock of being in this position when nothing like this has ever happened to me before, and in which Andy was super supportive, I came to some conclusions. Namely that I could not face the thought of working for this man any longer. That if I went through this support plan and didn't come up to his expectations, then I could actually lose my job next term. That I am not going to let twenty years of teaching and my self-esteem be damaged by this. And that I was going to resign. And yesterday, I did! And I am so happy. The old cliche of a weight being lifted from your shoulders is so true. The way the school has changed in the last few years, and the difficulties in the new setting have really taken their toll and carrying on there is just not possible for me. I am going to apply to supply agencies for September, and also the art group I mentioned. I have been researching my own history all week and today made a start on my CV and my supporting statement for the art group. Friends and colleagues have been great in helping me and I feel very optimistic. Things are looking up! 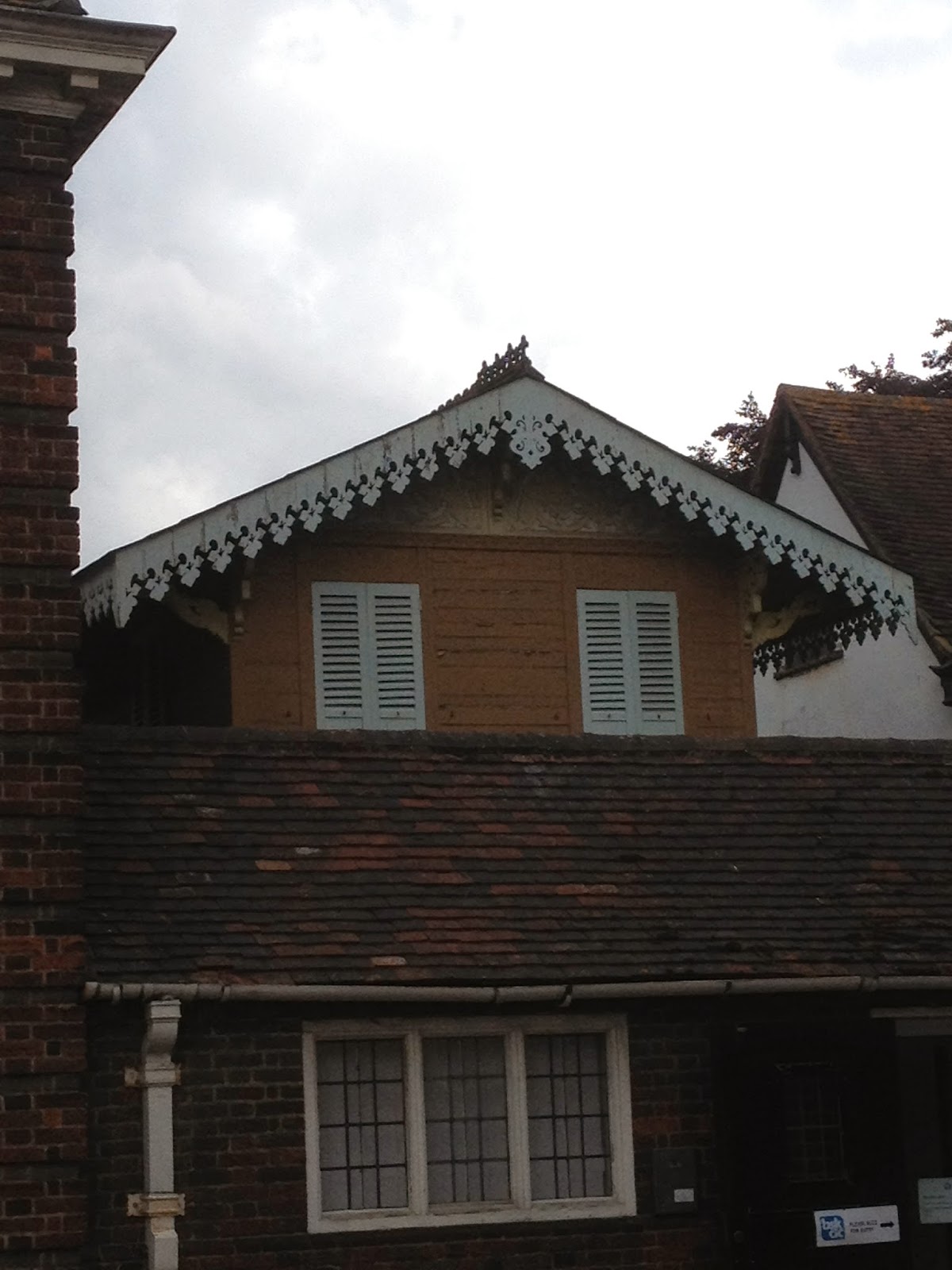 I looked up in Rochester on Thursday and saw this pretty gable, 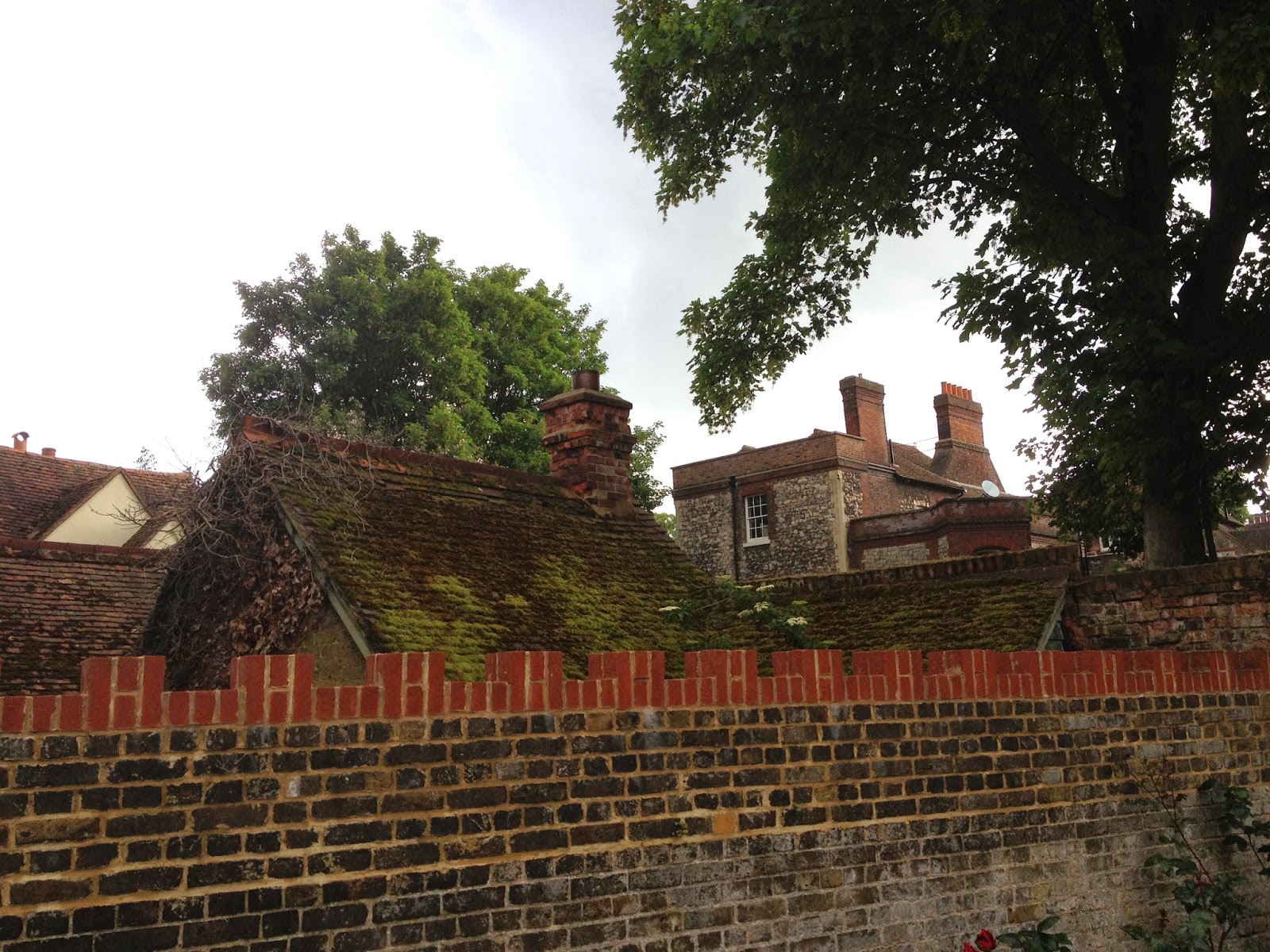 this mossy rooftop, and this bunting. 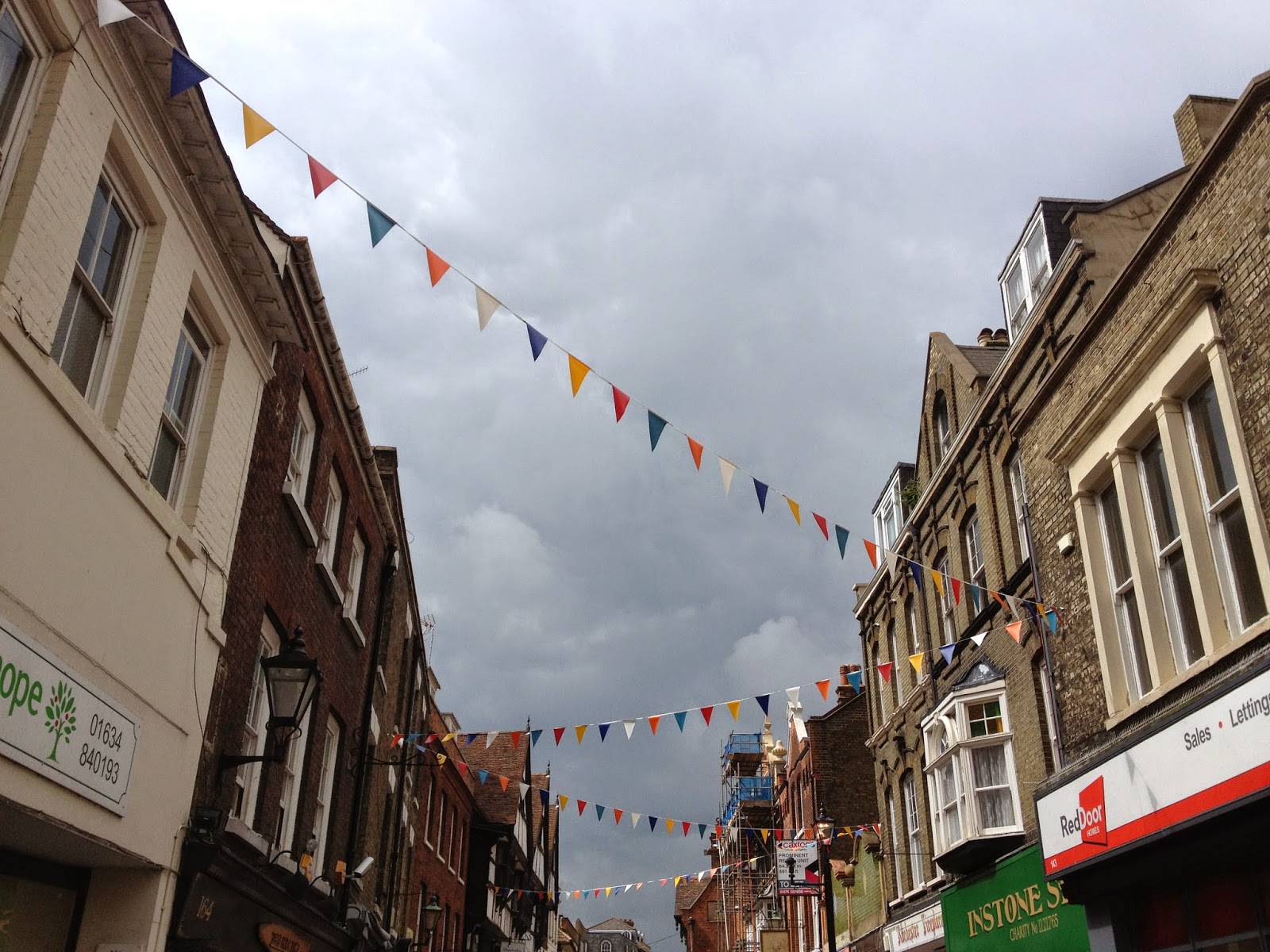 Dog Tale Number One
Just after my friend and I arrived there, we heard lots of barking. We looked over, and were shocked to see what was happening. A dog-some kind of Staff type dog, had got its jaws clamped around the leg of a guide dog-a labrador. The guide dog was yelping and trying to escape. The other dog's owner was trying to prise the jaws of his dog apart without success. A man strode across and managed to do this for him. The whole thing went on for a number of minutes and was really horrible. The poor guide dog owner at one point cried out 'What's happening?' Lots of people were trying to help. I went over but there were so many people that I didn't stay. Amazingly the guide dog was not seriously hurt. The poor thing had not tried to defend itself by attacking the other dog, just cried. Apparently guide dogs get attacked by other dogs fairly frequently, and it is an offense to let your dog do this and can result in a jail sentence.

Dog Tale Number Two
This is a much happier tale, and happened today. I was unloading my shopping from the car-and had the front door open while I did so. A little dog appeared from across the road. He was the cutest dog-some kind of medium terrier, not sure what breed. He went up to the front door wagging his tail, and put his front paws on the step. I said hello but stopped him from going in as I didn't think the cats would appreciate it. I expected his owner to appear but nobody did. He walked up the road to my neighbour's house and had a sniff around. I called him back and he came. He had a collar and name disc so I had to go in the house for my phone-he tried to follow me again. I then held onto him while I called his number and luckily the lady was in. She had been putting the bins out and didn't know he had escaped! He started barking but not at me. When she arrived she said he was barking at an aeroplane as he doesn't like them. As well as being such a cutie he had the cutest name-Jasper Baggins. Once I started calling him by name he became even more sweet and friendly. He can come round again!

OH SARAH!!! There is a god! I leaped and yipped at the news that you, the most marvelous teacher in all the kingdom, have much better things to do than namby pamby around that terrible boss man. Piss off Boss! YAY. So happy! Stella is retiring next month also! YAY! I read the dog stories to Dexter and the first one made him very cross and he said "mmmph", which is about all he can muster these days. The second story made him want to go out and sniff bushes, so that is what we did. I love this post, I am so happy!!!! HAPPY FACE! ( the poor children...)Sad face.

I wish the best for you Sarah! I know all will work out for the better!

Life is too short to stay in that position.Definitely the right decision.I stayed in my teaching job far too long and wished I had been brave enough to resign.Good luck and I am sure you will have no regrets.Barbara

CONGRATULATIONS!!! I have no doubt you will have great success whatever you decide to turn your hand to. Sadly, its the same 'game' going on in schools all across the country. Sadly, nobody seems to want to listen.
So glad the guide dog was okay. How frightening for both the dog and the owner! Ros

Sarah, kudos for you! I know you are going to find a great job worthy of your experience and talent.

Oh wow, Sarah, I'm sorry that happened to you! All I've ever seen is evidence of how much time and effort you put into your work, and how much you care about building an imaginative, stimulating environment for your kids. That must have been a terrible blow. It sounds like this new head has a horrible management style, using demoralization and fear to motivate those under him. A dreadful working environment for the teachers will only result in a poor learning environment for the kids.

On the plus side, you now have the opportunity to move on to something better! I wish you all the luck in the world in finding a new position, whatever that might be.

Wow...... what a blow but what an opportunity for you to explore new options! Here's to your "new" and improved!