I am going to focus on good things this month. I have had enough of worrying about things that may not even happen. Work was going kind of ok until Friday, when we had feedback-not personal but a kind of summary of the main points of the observations that went on on Thursday. (This took place in our briefing meeting immediately before school) The main points I remember from this feedback are that we are not in as bad a state with teaching and learning as the other school that he took over was at the start, and, that some teachers are lazy. Well after that comment and the shocked silence that greeted it, I kind of stopped listening or taking in what was being said. I think it is a terrible thing to say to a roomful of people who, as far as I know work extremely hard, care a lot about the children they teach, and also, I am guessing, would mainly take this comment to heart and think it was aimed at them. (I include myself here!) It may well be a tactic to get us all to worry and work even harder. But it is not a good tactic in my opinion. It is a demoralizing comment to make, especially to a staff who have had a very demoralizing year. It also reminds me of that poor teaching strategy, which I have seen in action on occasion, and probably did when young and inexperienced, of telling off the whole class for the bad behaviour of one or two people. Not good. So, after a lovely weekend, but one overlayed with worry, I have decided to try to be positive, do what I have to do, and ride out the storm! So, no more about school for a while (unless of course it is about something lovely the kids have done), but instead those things that cheer me up each day. 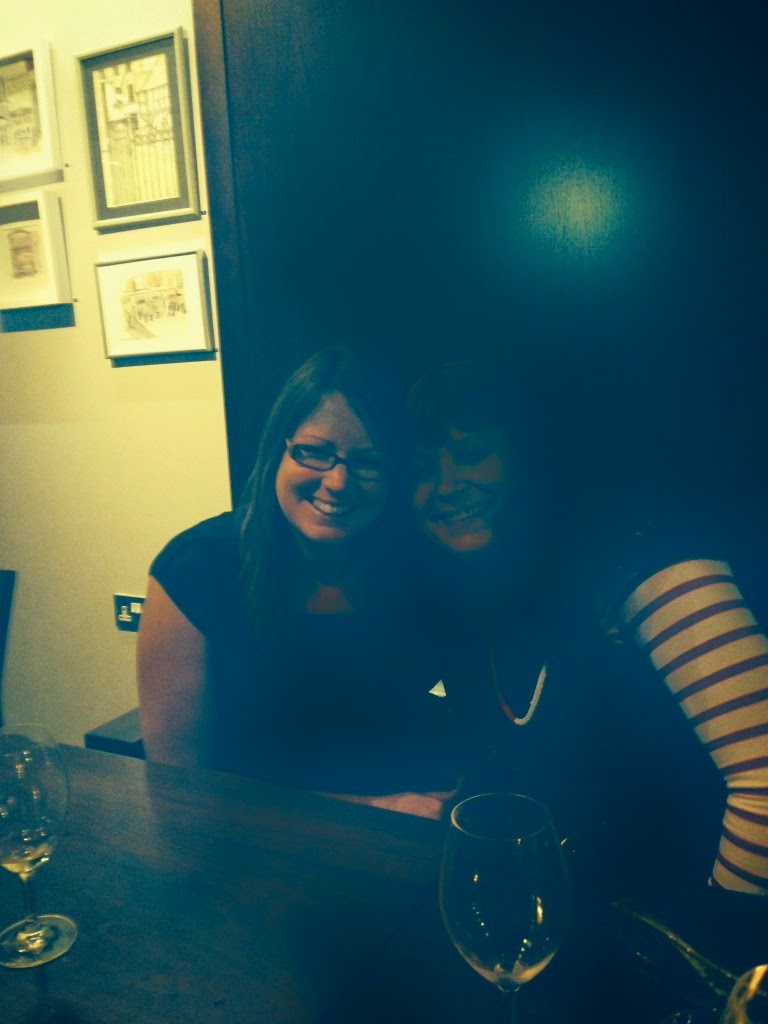 Me and my friend Sarah (over from Holland this weekend) enjoying curry and wine on Saturday. We went to a restaurant called Cinnamon. The food was delicious and quite unusual. 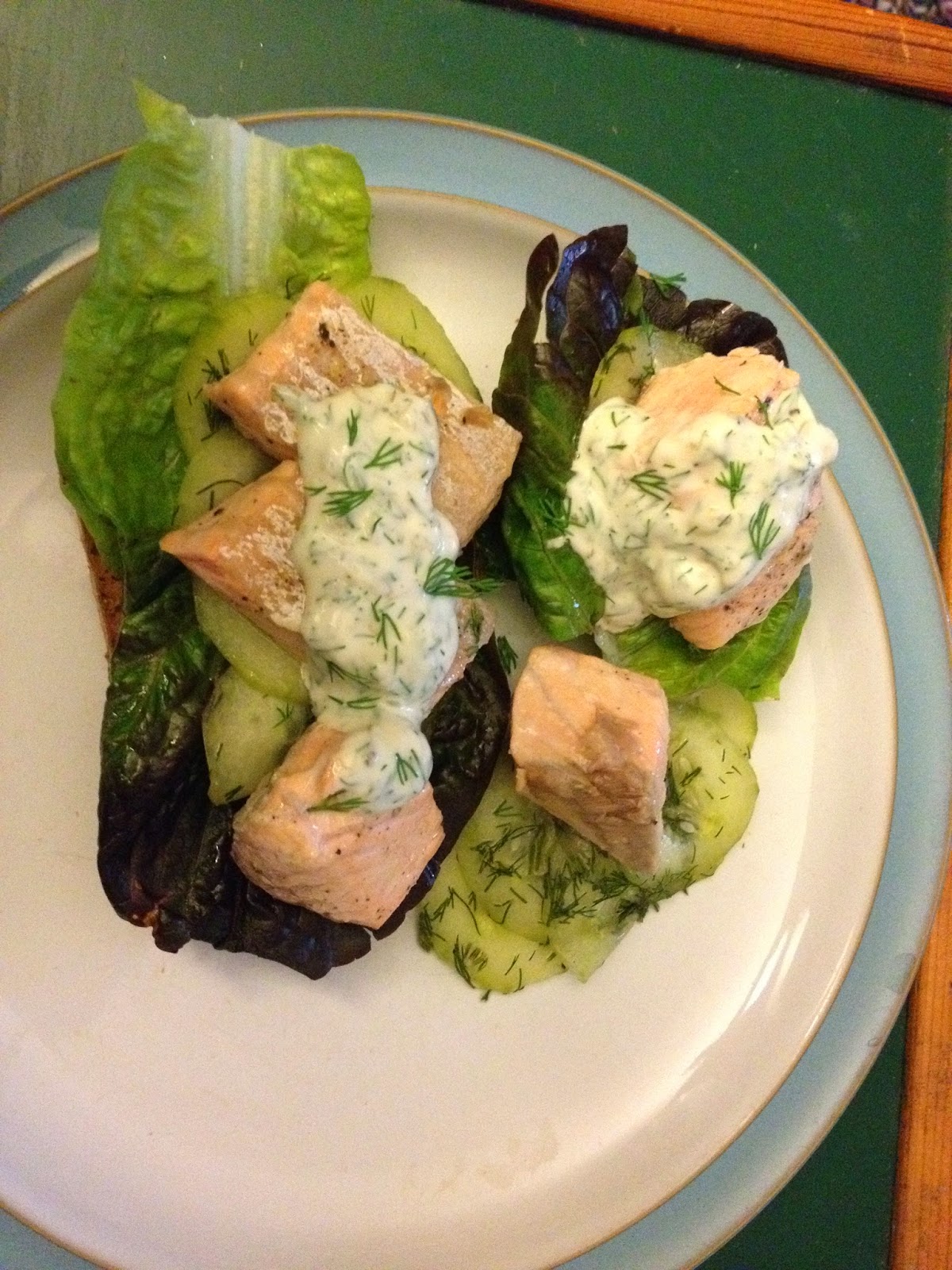 Salmon, dill mayonnaise, crunchy lettuce, marinated cucumber all on delicious rye bread with caraway seeds in. This is what Andy made for tea last night. It was lovely! 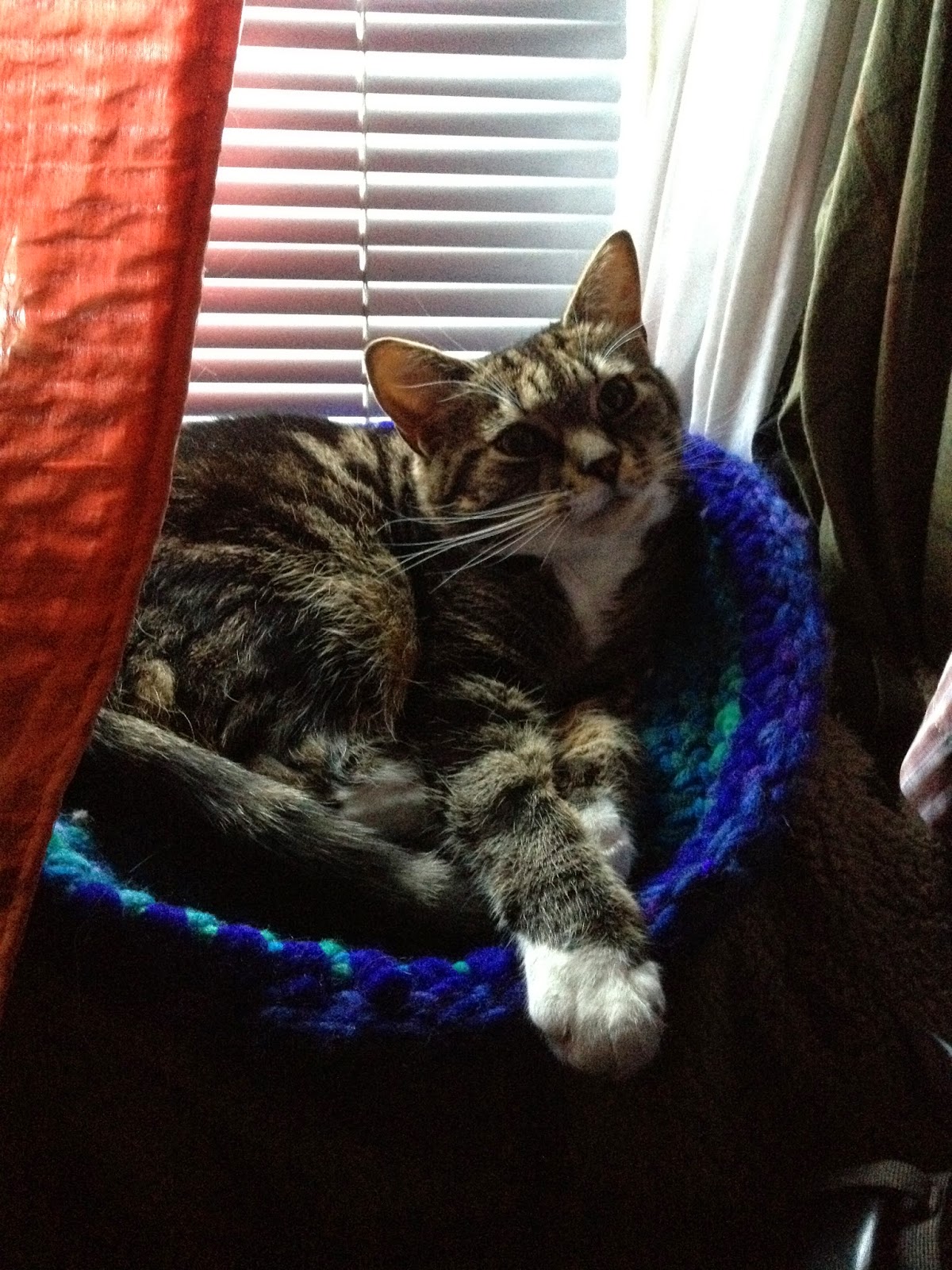 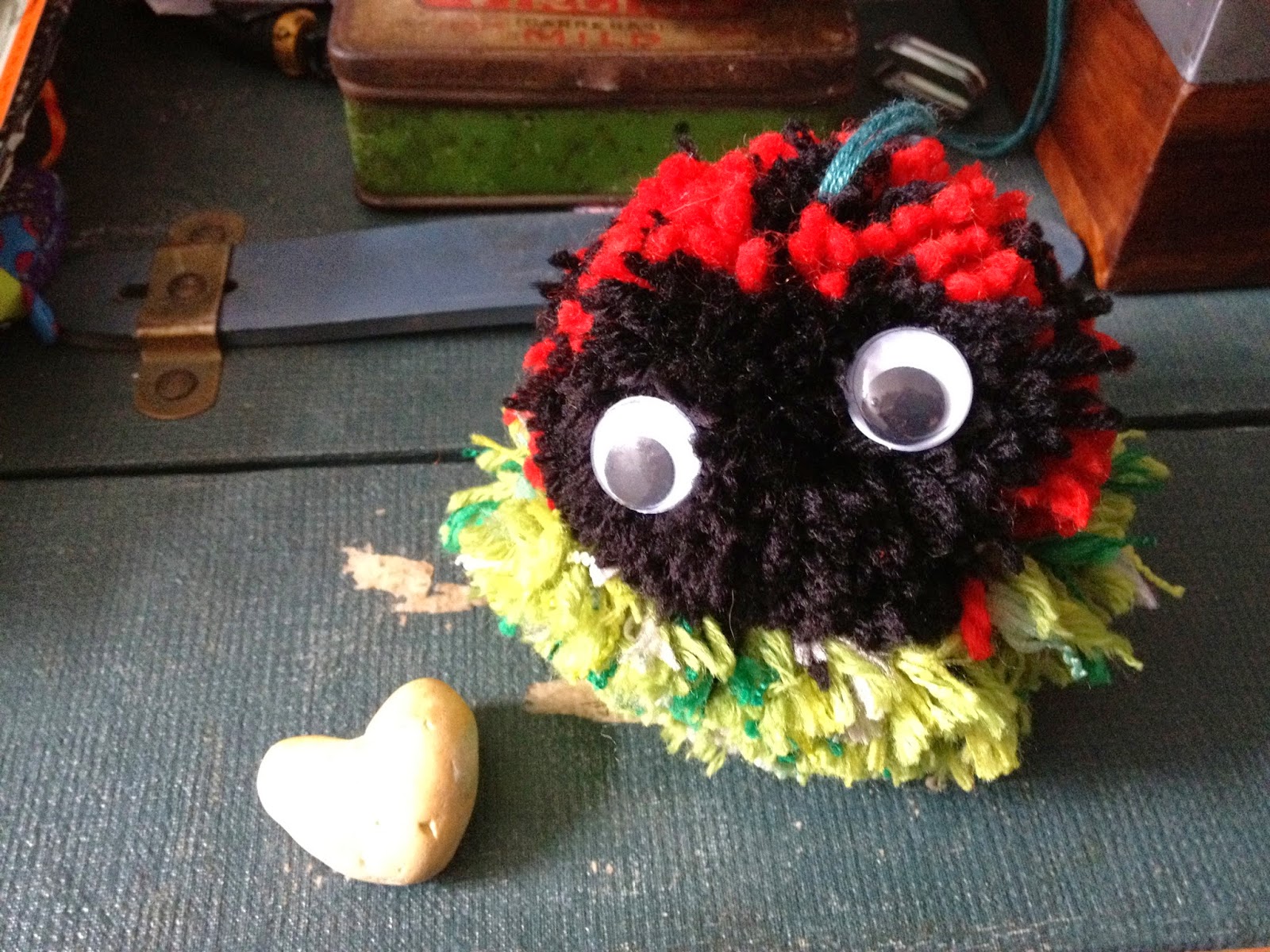 Ellie in my class shares my liking for stones and shells. But I was surprised and touched to be brought this stone in the shape of a heart from her seaside trip this weekend. How did she know I would love it?!
The other thing is a ladybird on a leaf pom pom. I had PPA this morning so had lunch at home. I was watching the Create and Craft channel and they were promoting pom pom makers. The lady demonstrating shared very quickly how to make things-animals mainly by winding the yarn in certain ways. You do a simple picture on a circle, fold it in half then try to follow it. I have not had a go at any more yet but am about to. I am most pleased with my ladybird! 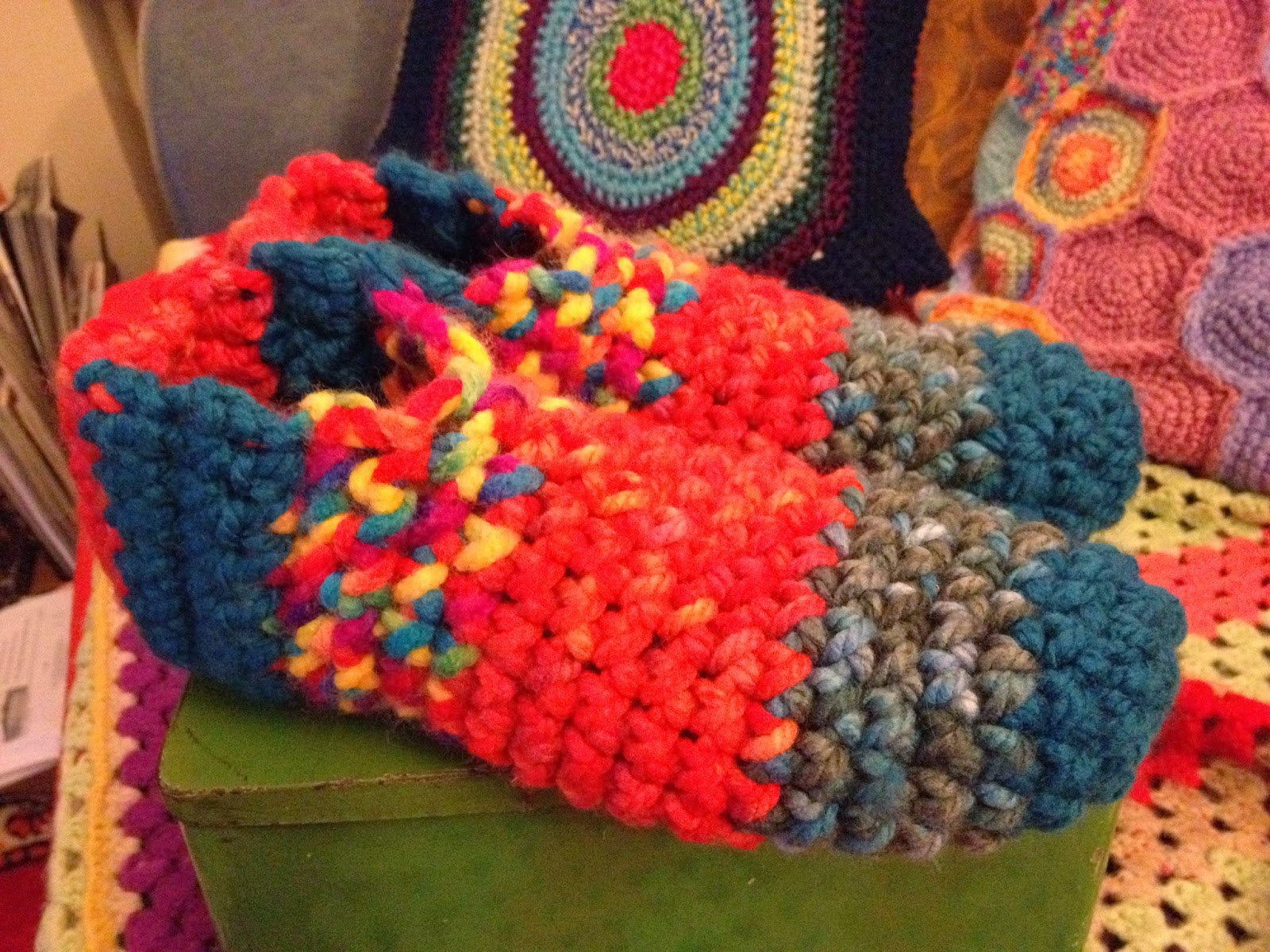 These are my latest slippers. I used the chunky yarn. It is slightly scratchy on the feet but they are so thick I can use them over thin socks. They were quick to make with this yarn. I now have three cat baskets so am starting on the other four my sister wants. ( I don't know if I mentioned I sent her one for her birthday and all her cats want to go in it-she has five!) I also have some more Amineko cats to make for my friend-she took a couple back home this weekend that I made ages ago for her kids, and now would like some more. Enough crocheting 'til Christmas probably!
Posted by Sarah at 13:13

Oh Sarah, what a dumb way to talk to professionals, especially in a group setting. Sounds like someone needs some group management sessions!
Atta girl, you've got the right idea. Enjoy the kids and focus on the cheery things of the day.
Any time your Andy wants to come cook at my place, he's welcome! We'll just sit back and chat.
Have a good week. xoCarole

Love your latest crafty bits!!! Your little people are so lucky to be able share in your talent. Ros

I'm sorry it has been so stressful. It shouldn't be like that. I adore the slippers, so envious, wish I could make things like that!