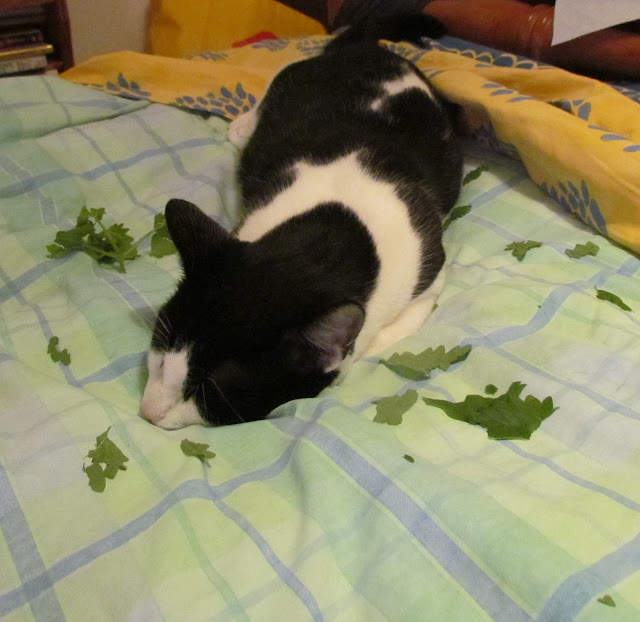 Oliver has been with us for ten months now and he is a very happy cat. He hardly gets called Oliver anymore. We call him Bollie mainly which comes from Bolivar rhyming with Oliver. (Almost) Andy calls him Chewie, as he likes to chew fingers. He used to bite with more force, but now he knows us and that we don't mind, he just has a little chew, and closes his teeth around your finger. He is very funny and makes us laugh every day. Here he is on the bed. Lily had just had some catnip. Usually, on her daily excursions into the sitting room and kitchen, she heads straight for the back door, where, just outside, there is a pot of catnip. She chomps big bits of it and is very happy with that. Yesterday it was raining, so I brought her some inside. She had a little chomp, then I showed Bollie. He went absolutely crazy, attacking it, rolling in it, biting it and eventually falling asleep in the middle of the mayhem! Lily just watched him, and went up to him to sniff him. We were worried when we first got him, that he would attack her, as she is very frail. But she has got him under control. She hissed loudly at him a few times, and he is scared of her! We are not sure if he knows that she is old and delicate, but whatever it is it works. He often sleeps for ages on the bed not far from her. We still don't let him stay in there if we are going out, but he is pretty good. Unlike with Cassie, who he chases and leaps on when he comes in in the morning all excited and wanting to play. She knows how to deal with him too though, and has given him a few scratches on the nose. She sleeps up high and is very good at eluding him by running under a chair or the table. And sometimes they make a terrible tag team, chasing and terrorising a mouse together. Cassie is not to be trusted with Lily, as she will scare her off the bed, and underneath it to hide in Andy's sock drawer. So she doesn't get to go in the bedroom that often. She doesn't really want to anyway.

Your cat frolics are hilarious! I am laughing and snorting through your post. Crazy babies!! The catnip looks delicious, it really does! I am glad that Bollie is in the house to keep the girls on their little raspberry toes. Poor Lily!

Cats are so funny when they get into catnip. Bollie looks positively exhausted!

"He is very funny and makes us laugh every day."

Lucky you! Lucky HIM!