You Can See The End Of The World From Here

The storage container I have been going to is on Sheppey, in an area called Halfway, a strange name which comes from the pub of that name in the village, and that got its name from the fact that it was halfway between Sheerness and Minster. After depositing stuff, if I am on my own, I go to Sheerness for a coffee and wander on the beach, and if I am with Andy and meeting my brother we go to Ken's Café in Queenborough, where my Mum lived as a child. (Not in the café obviously!) 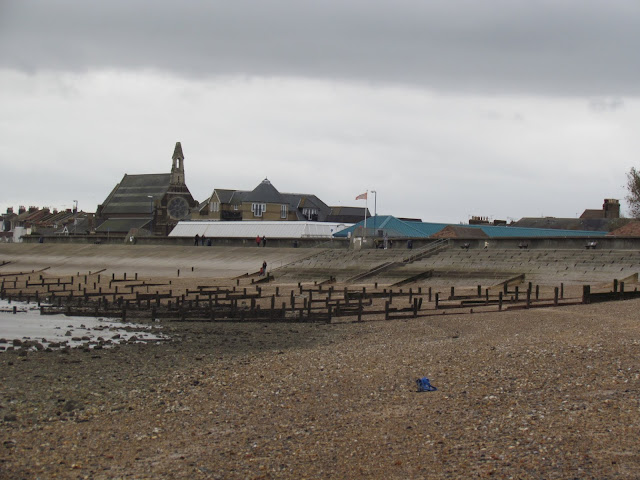 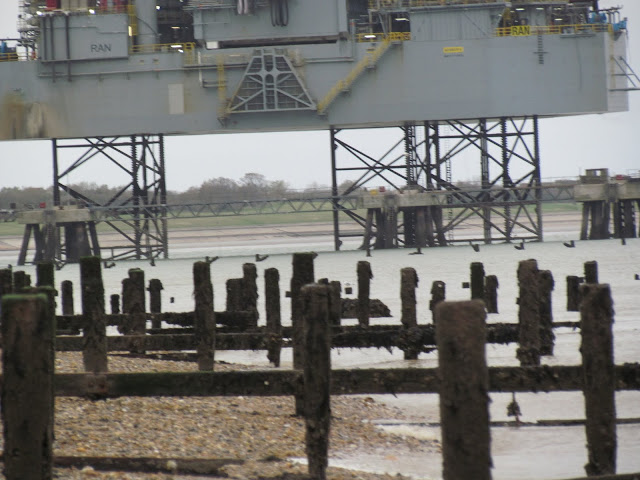 Views of Sheerness Docks. It looks like a rocket launch site. 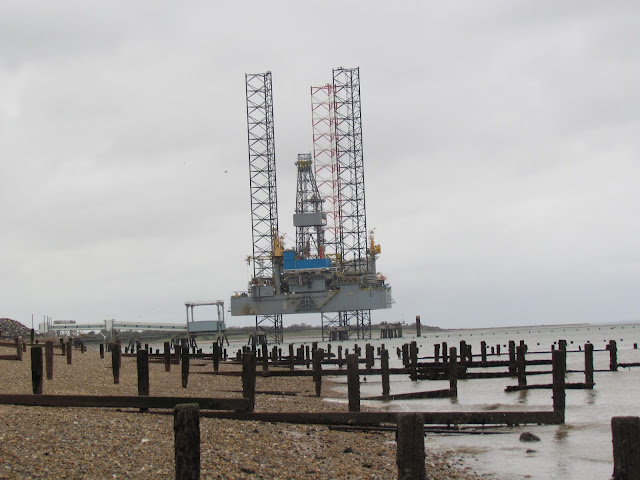 I sat on this bench for a little while. 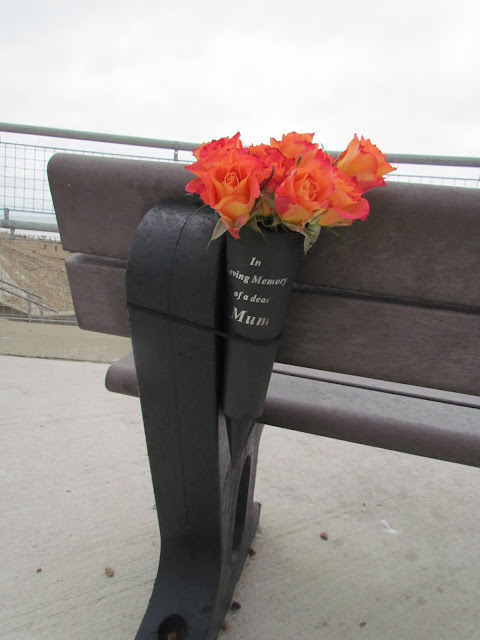 This starling posed for me. When I went again on Monday I found a dead one on the beach. I hope it wasn't this one. 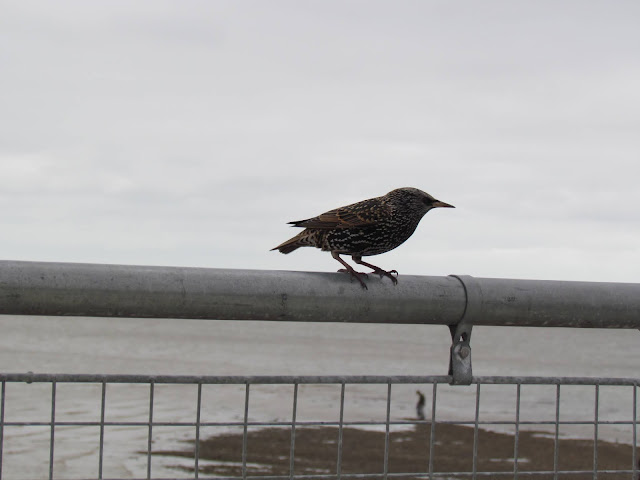 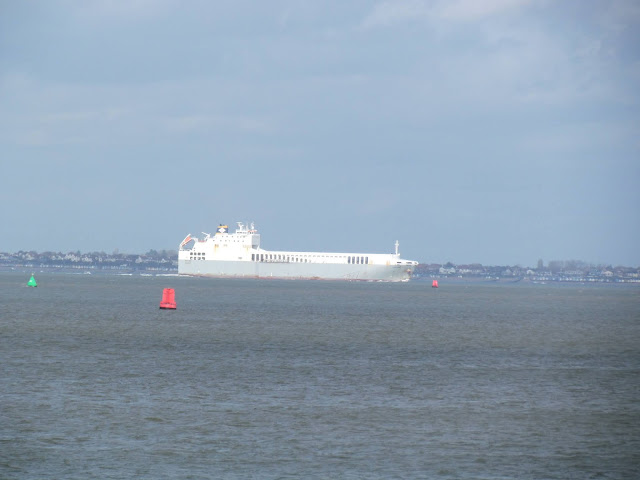 It looks even more like a launch site from here. 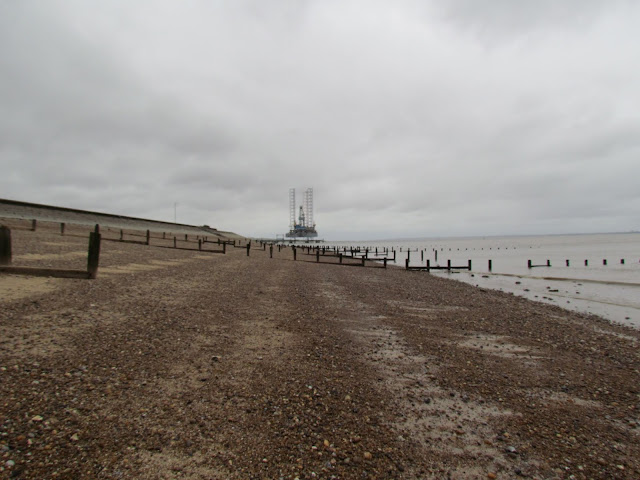 Mysterious buildings in the distance, and two ladies who look as if they can see me but they were too far away. These buildings are from WWII. Not sure what they are. Next time I go on my own I am going to walk further along. 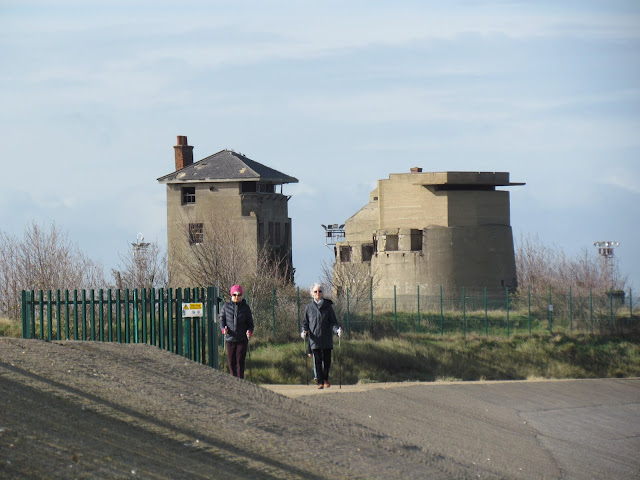 A water tower. These are interesting things, of all sorts of design, and remind me of UFOs. The reason for them being a tower is to use gravity to get water out. (I expect you all know that but I didn't!) They can be drinking or non-drinking water, depending on use. They are filled by a pump. They came into widespread use in the mid nineteenth century. You see a lot in rural areas in this country. Some have been converted to live in. I like the ones on the buildings in New York. Here is wikipedia on them as it has some interesting examples, including the one on Shooter's Hill just up the road. 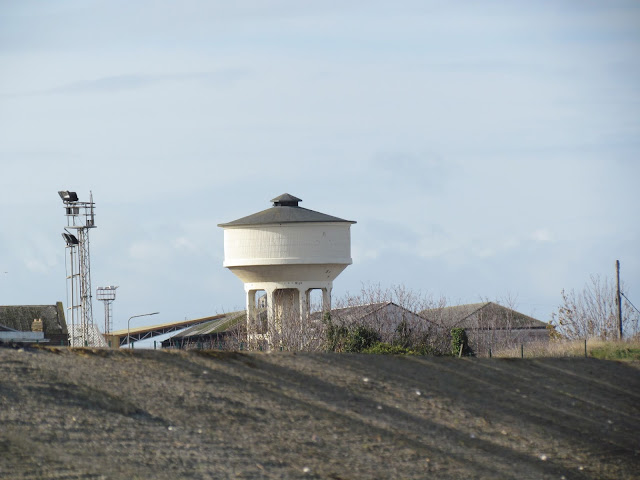 The older wall at the bottom of this picture is Garrison Point Fort, built in the 1860s to improve upon existing fortifications on the Medway. 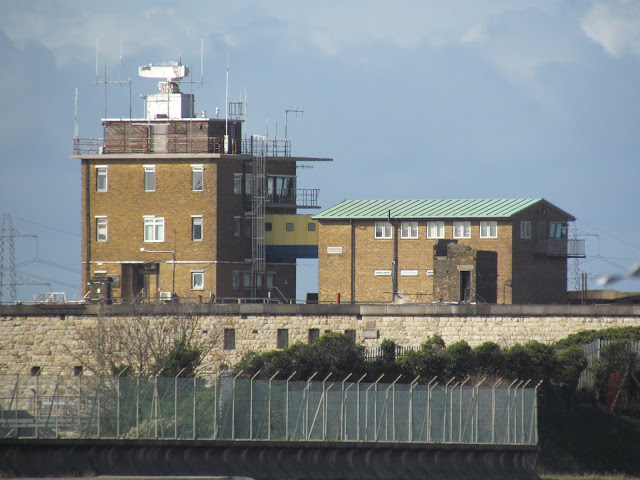 Below are the masts of the SS Richard Montgomery, a cargo ship built during WWII. It was wrecked off the Nore sandbank in the Thames Estuary in August 1944, whilst carrying a cargo of munitions. About 1400 tonnes of explosives remain on board. It is closely monitored by the Maritime and Coastguard Agency, as it still presents a significant hazard. Here is a BBC report on the ship, which says the masts are due to be cut from it soon, as they may be producing a strain on the ship. The contract to do that will be for 5m. I hope whoever gets it knows what they are doing! A unique job opportunity, cutting masts off of sunken explosive filled cargo ships. 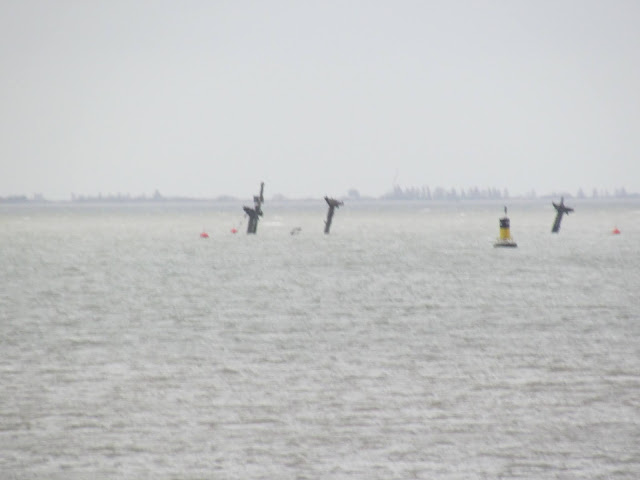 Painted on the steps to the beach, is part of this poem by Ross Barber. I love the lines 'But whisper to yourself, that you can see the end of the World from here. 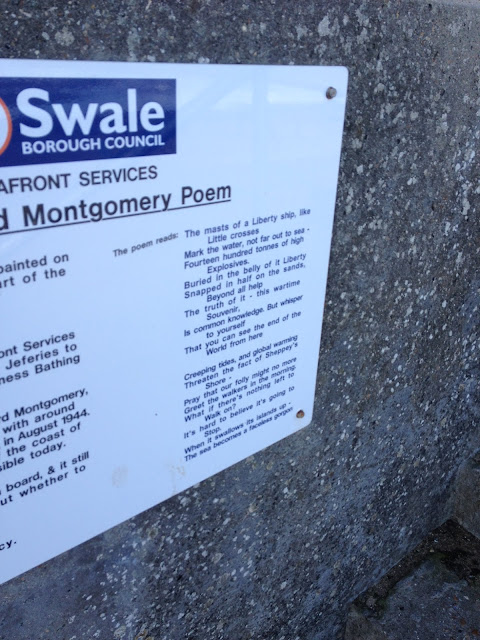 Southend across the water. I watched a programme about a hotel there last night. It looked really lovely. I have only been there once, but after watching the programme I might go again. It is famous for its mile long pier, which has a train to get along to the end. 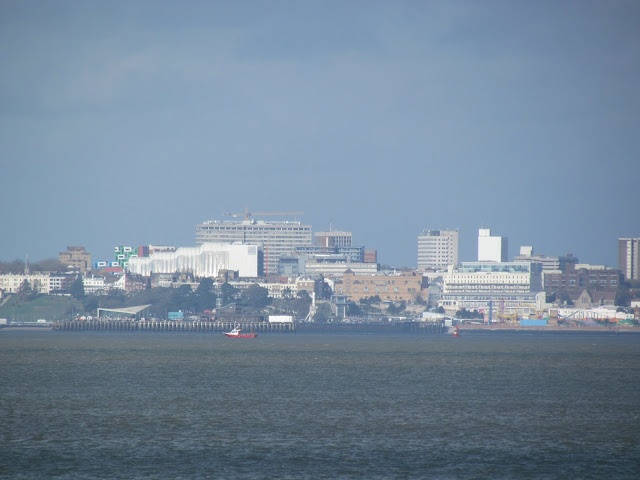 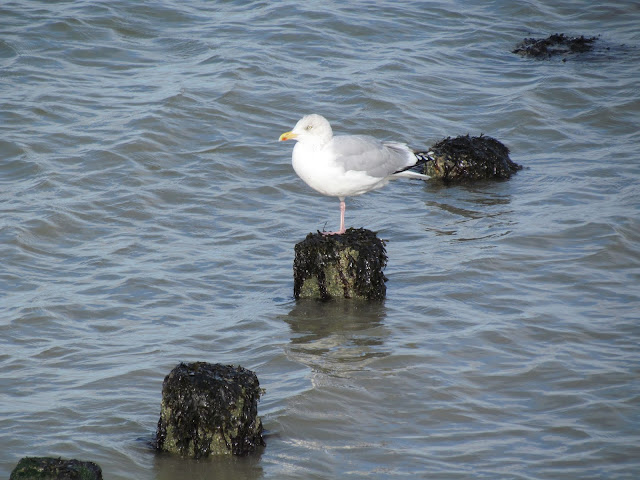 I am not sure what animal this is. It was attached to a little old car in Tesco's carpark in Sheerness and I liked it. 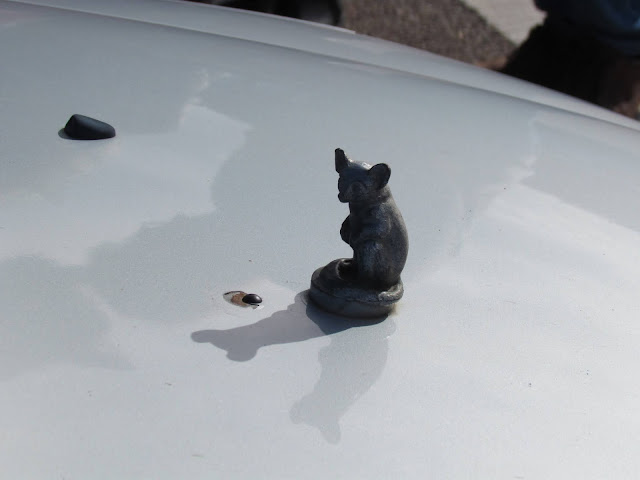 A loris, maybe? That's my guess.

apocalyptic looking shore, skeleton masts of a broken , still explosive vessel is spooky! I love the line you chose of seeing the end of the world from there. "What if there is nothing left o walk on", indeed. Sheppey seems very far from your little house but really that distance would only get us here, to the edge of town. Glad you have a place to store things , and what a place! intriguing. I noticed to the north is "Foulness island" and to the southeast is Whitstable, all charm and beauty. Such a diverse area!
The photo of the women who can not see you made me laugh a little bit-I thought their walking sticks were white canes.
Sheppey looks forlorn, the sky fully cooperating with the mood. I do love the entirety of that area- weird looking buildings lacking color."end of the world" ish. Good luck with your shifting of things and sorting and moving . So much work, I am cheering you on from over here in scary orange land!

Like Steve I also thought a bush-baby type animal---but how odd that it would be on a car!
Wouldn't that be a funny name for a make of car?
"Introducing... the slow loris!"

I love seeing photos of people's outings---to me it's all very exotic and makes me think I should/could do more of that myself--anywhere one hasn't been is "exotic", even if it's just the next block over!