This Week and Last

Last week was half term, and apart from debating what to do with my life, I also had to go into work twice-once for planning, and once for making this display-with the other teacher in Nursery. This is our topic table. We are looking at 'Bathers at Asnieres' and started by asking the children to talk about the painting. Obviously talk about seaside visits came up, some mentioned sharks and fish, and so we took that as licence to include lots of sea type things, I made the cardboard boat shelf from large card, papier mache and then painted it in a way supposed to be reminiscent of a battered old rowing boat. Also the oars. The two ships were a lucky find at the boot fair and the postcards from Rochester for 10p each.
The topic was imposed on us, so is not child initiated as we like to do. So in addition to all the boat and sea related things, today was spent starting to make a BMW cardboard car-one that they can sit in. This came from a boy in my class who has been talking about cars a lot recently, especially BMWs. He never looks that impressed when I tell him I have a renault! It started with him, but lots of children helped. We found cable reels for wheels, looked at a real car outside the fence to see features of a car. measured and cut a large box, cut one door, tested my seat idea, (another box!) then painted the bodywork, (and each other, the sinks and. in one case a leg) black. We all cleaned up the mess pretty well though. Tomorrow we will paint the interior green, cut the other door and then on Friday hopefully fix the wheels and the other things like lights, number plate, dashboard and steering wheel.  A picture will follow! 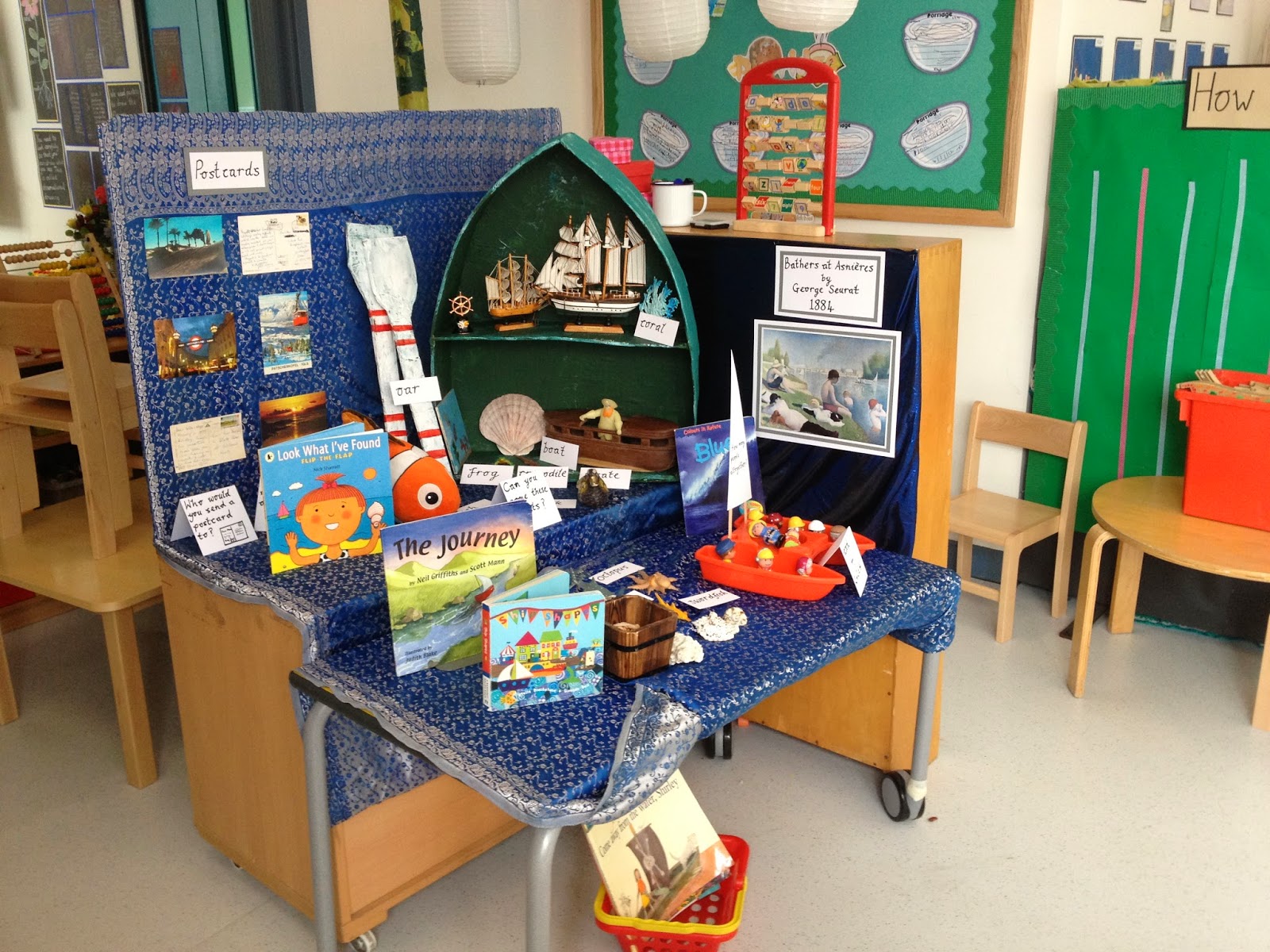 Other bits and pieces from this week and last... Cassie being cuddly on the day after her trip to the vet (for boosters) She hadn't quite recovered from the horror of it. 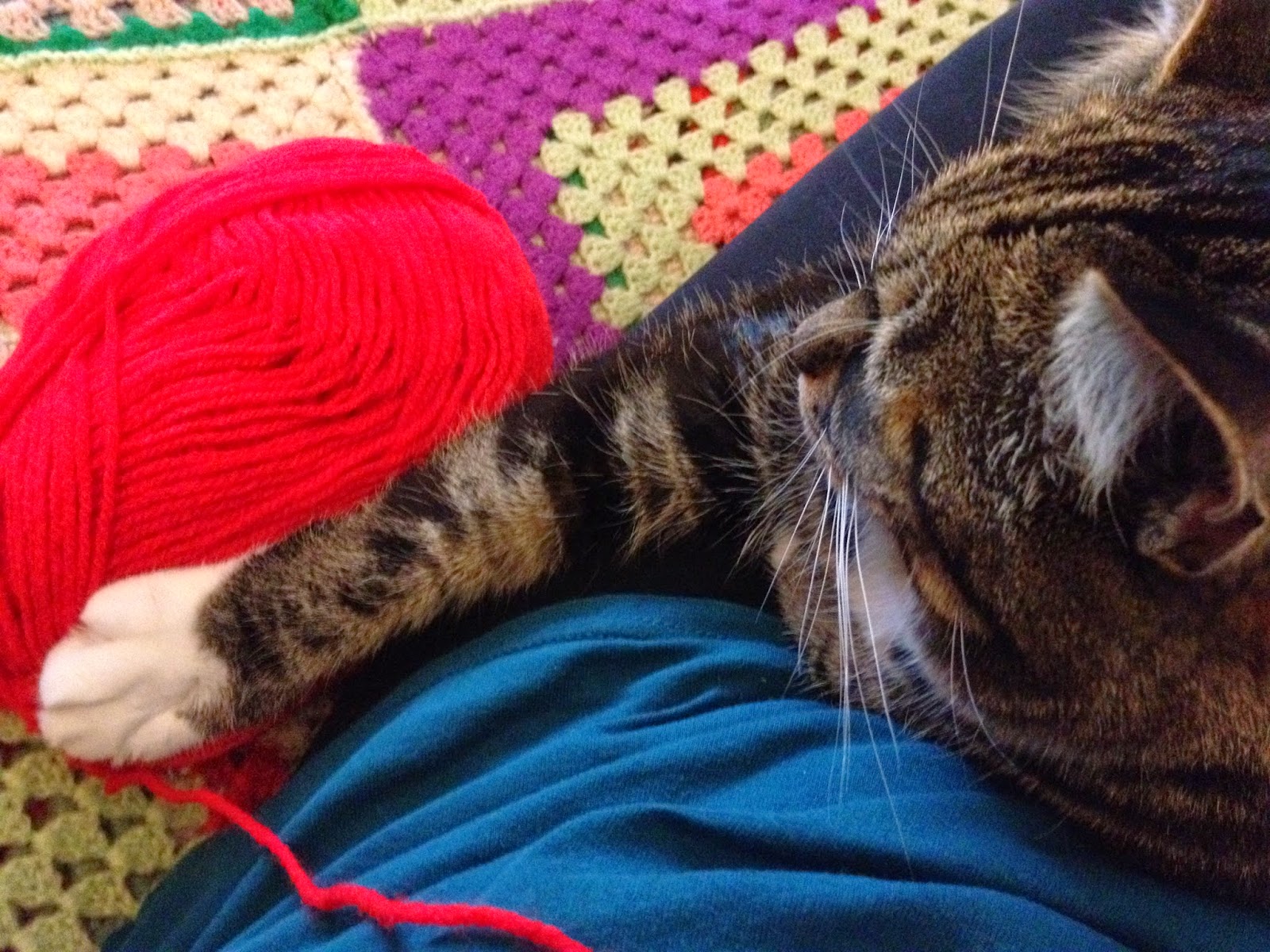 Another big ship in Greenwich last Friday. I love the way the water looks. 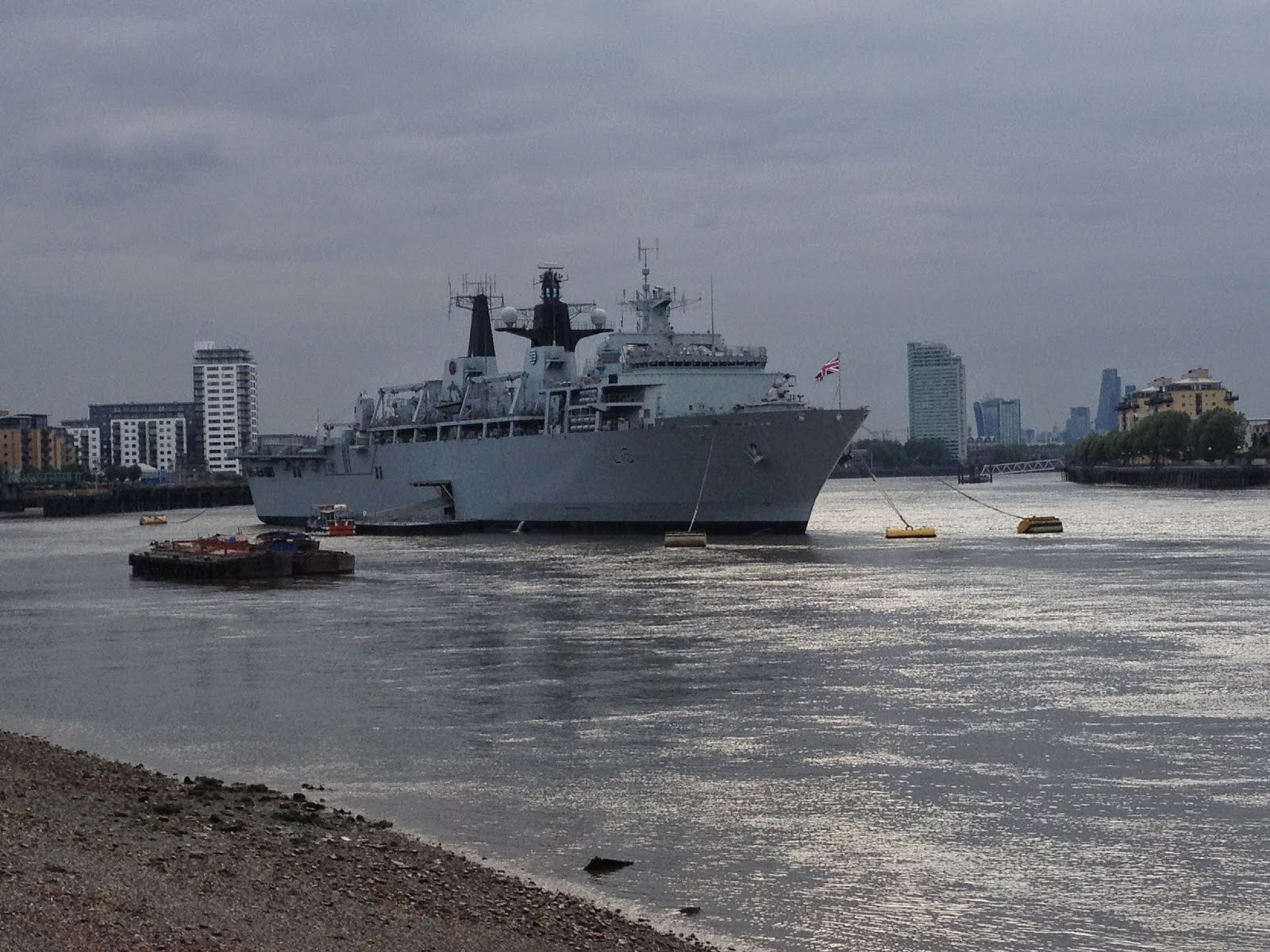 Another day after the vets shot. One exhausted little cat! 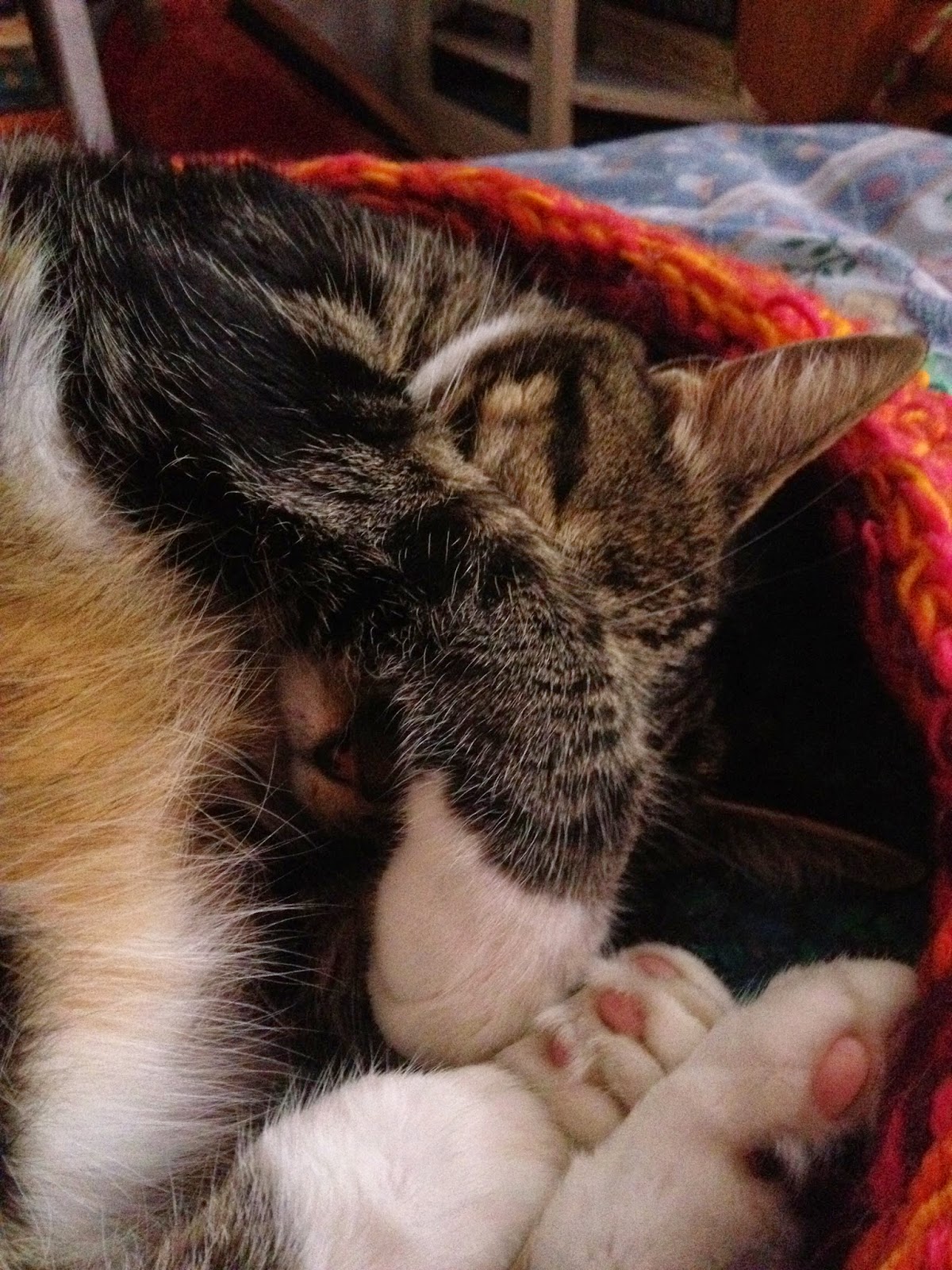 My petunias are blooming beautifully. This is an old teapot I have had for years which I love. It does stay out in the garden so I thought it would appreciate a plant. 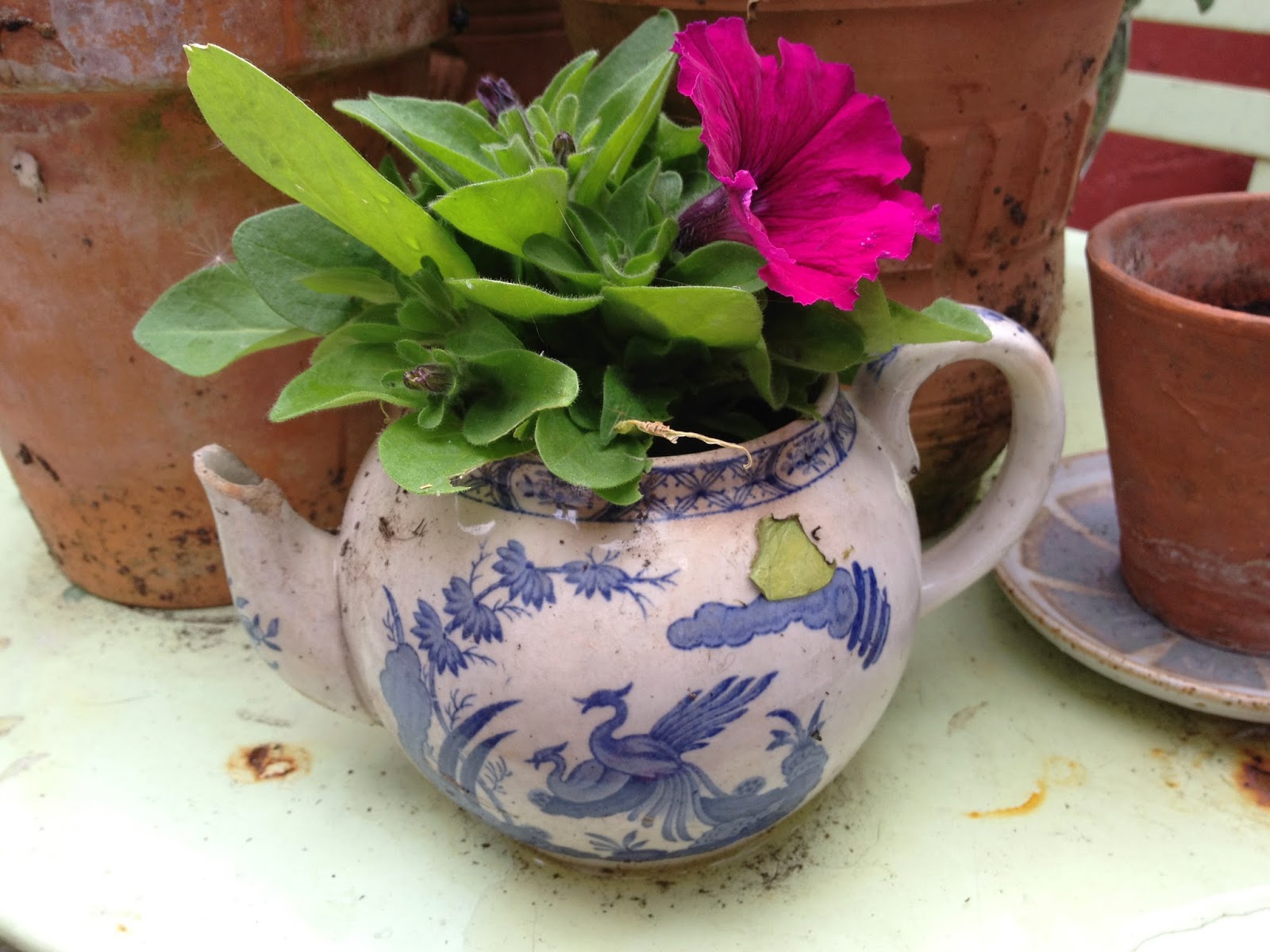 I don't know what plant it is from, but this cottony seed carrying fluff was everywhere at the start of the week and the end of last week. As well as looking like snow as it moves through the air, it does a good impression of it on the ground. 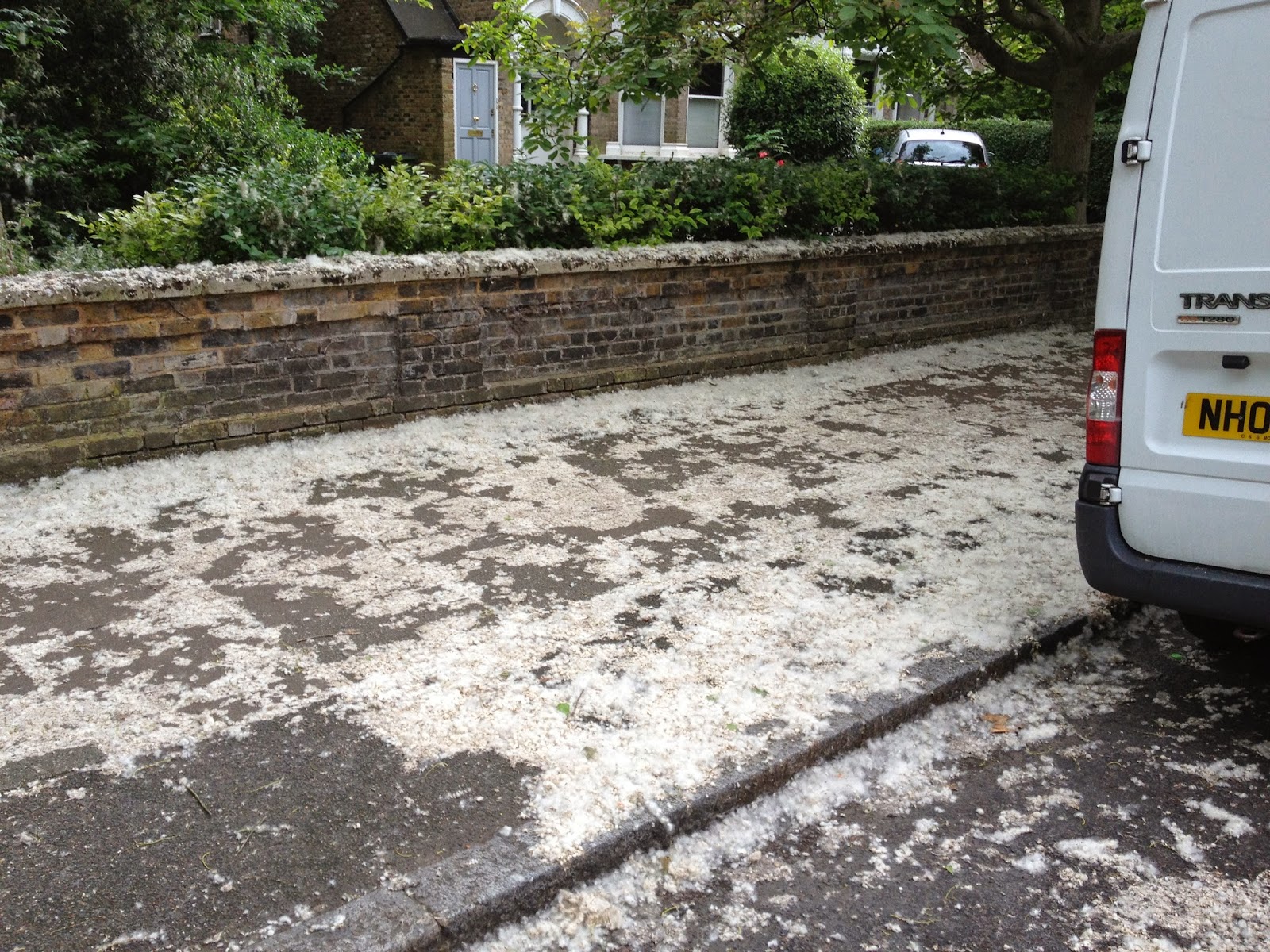 Another part of our boat related work. A big boat picture for my carpet sessions this week. It started as a line drawing but it needed colour as you could not tell what was what. A perfect excuse for some relaxing colouring in. 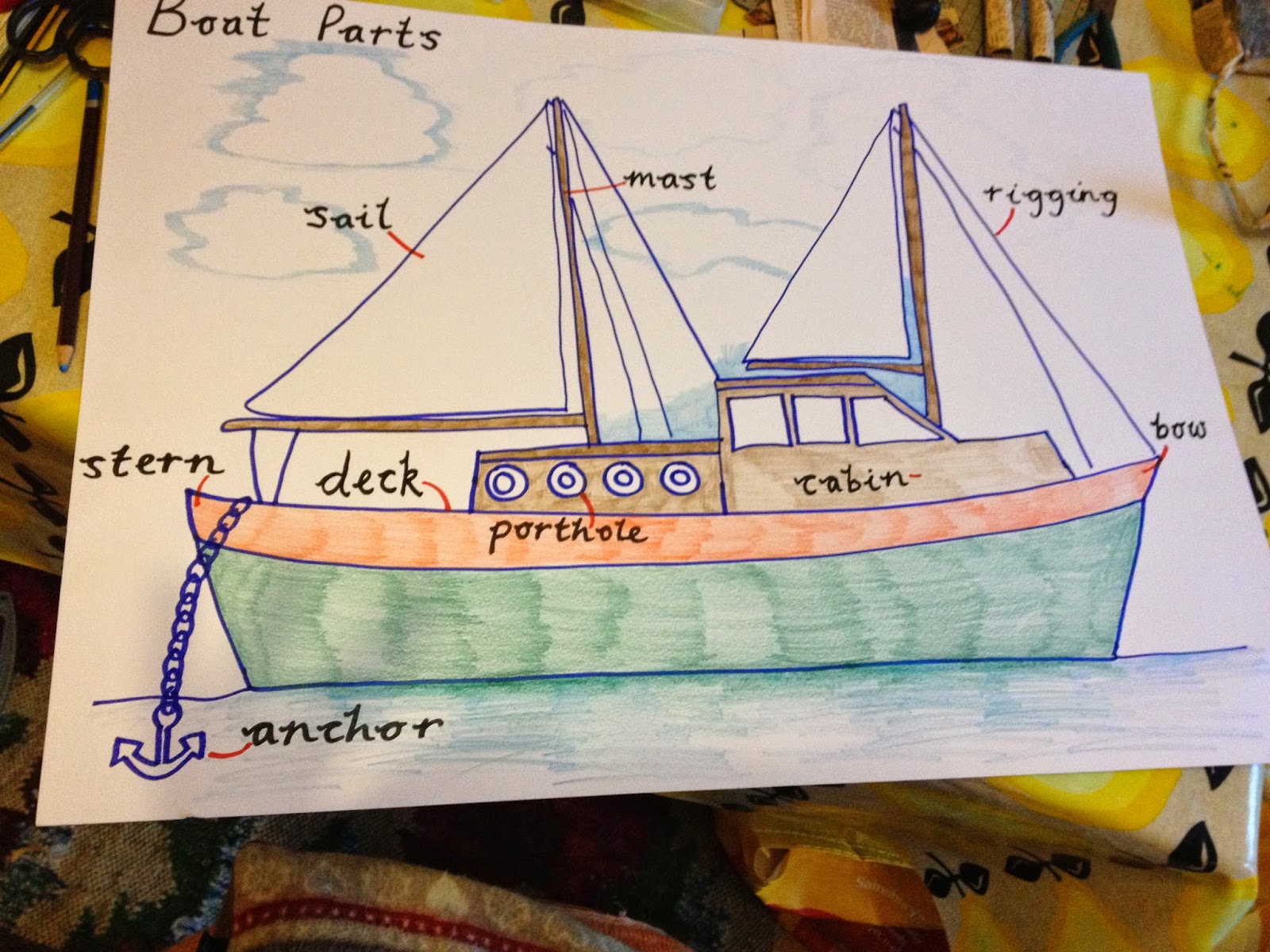 I have been feeling creative again-I was too stressed to even want to make anything-ever since ofsted, but after deciding to leave I feel like doing things again. I saw Kachina figures on tumblr last week-they are Hopi spiritual dolls and are amazing. I love the simple shapes and bright colours. I particularly liked this one so had a go at making a cardboard papier mached one. Having finished it I can see that the head is too big, but I still like him. He is a  morning singer-so should help me wake up in the morning! 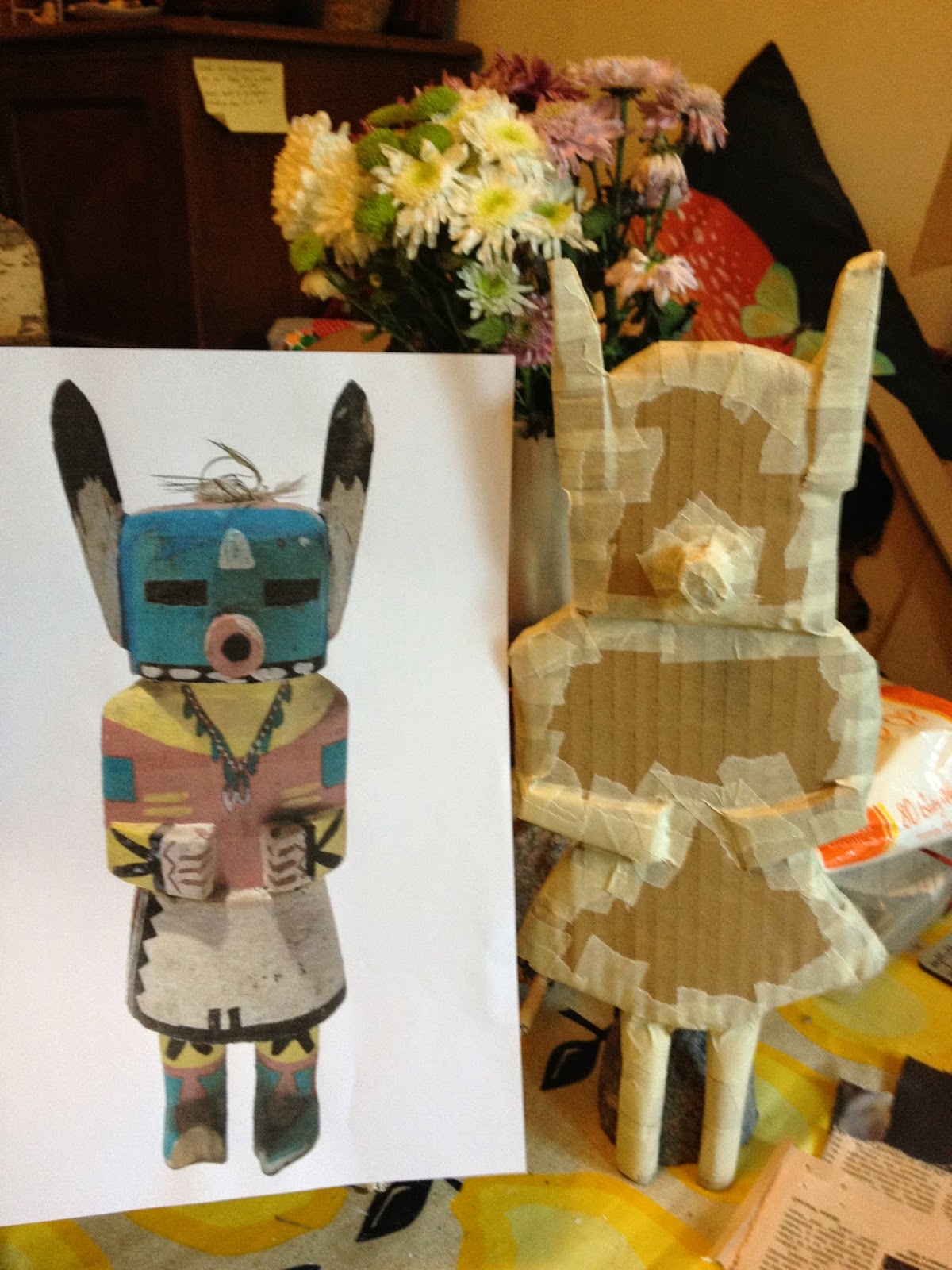 The Financial Times is my newspaper of choice for papier mache. It does not seem as pink as it used to though. 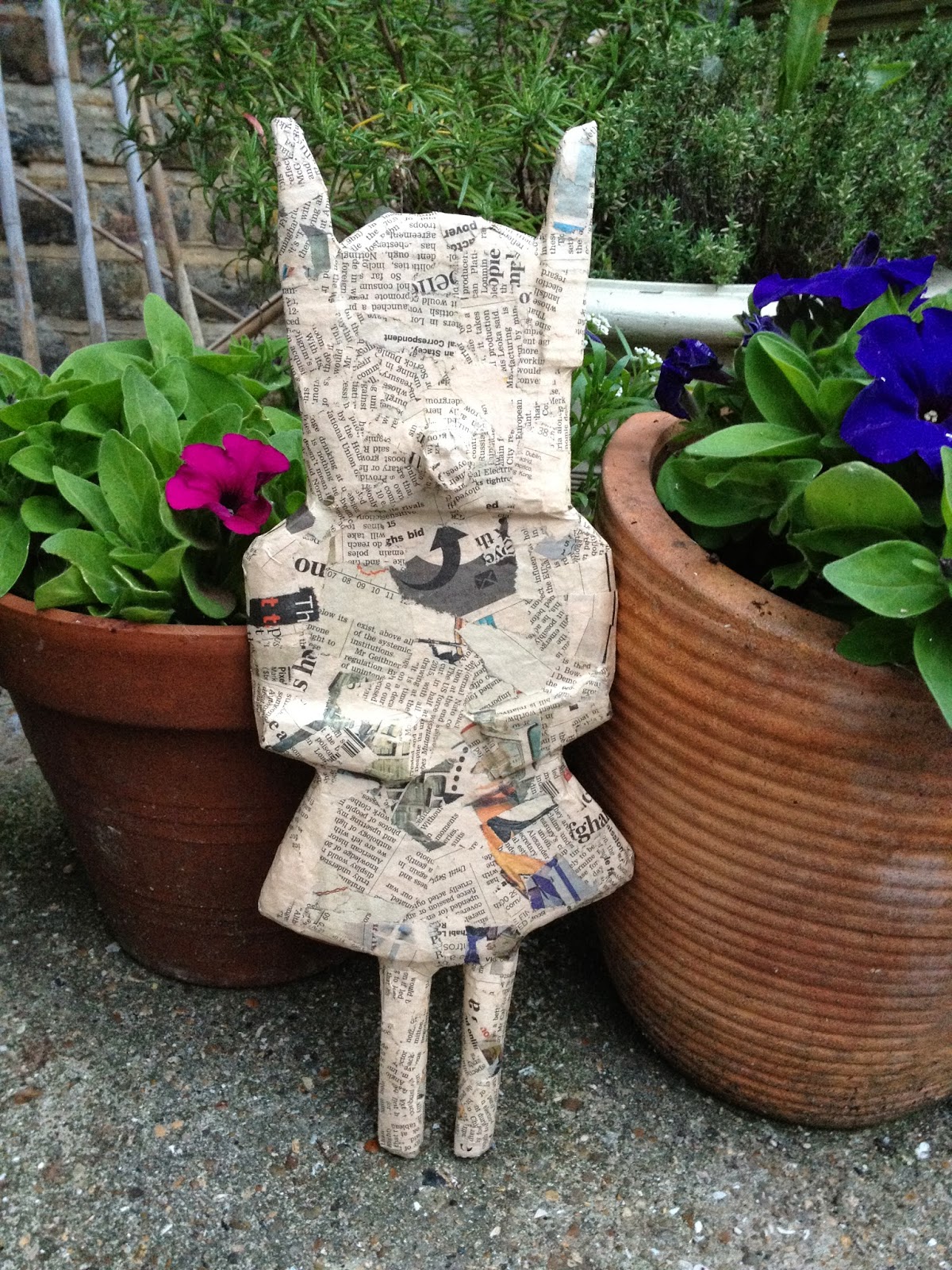 I had a lot of trouble getting the turquiose colour. It seems I have no turquoise paint at all. I bought a paint sample from B and Q as I didn't want to drive all the way to Hobbycraft. I used a mixture of paint sample pots, acylics, gesso, gouache, watercolour tube, and cassein paint. I am not at all sure if all those go together but it seems not to be peeling! 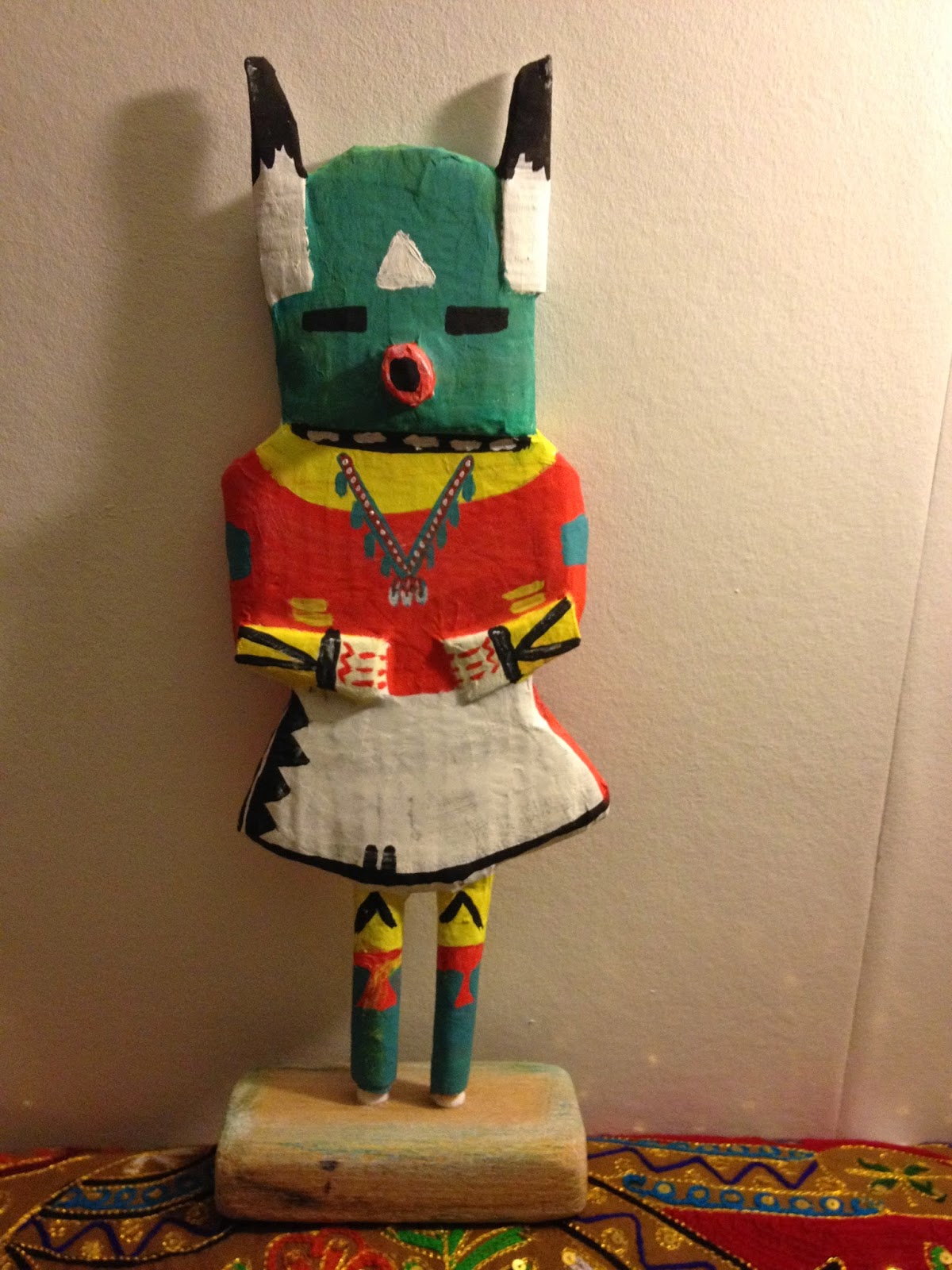 The base is an old (splintery so obviously had to be removed) wooden block from school. I hot glued two golf tees onto it, with a stick stuck to each, then pushed the hollow legs of the doll onto these. It worked well and suited my impatience to see it finished.
Posted by Sarah at 15:31

I'm very impressed with the cardboard boat shelf. You've got me wondering whether it would be possible to make my own version in the style of the old fashioned shadow boxes. But no doubt, I would never get round to actually making one.
Stressful visits to the vet, not nice, but super cute photos.
I wish I had an old teapot after seeing yours.