I am so relieved that it is the holidays. The last three weeks at work have been horrible, due to the head inviting Ofsted in, and giving us all two weeks notice and a long list of 'non-negotiables' to complete. On top of that we had parents evenings which are really tiring. So, the whole school spent two weeks rushing around trying to be ready for the inspection, and, consequently being physically and emotionally exhausted by the time they came. This is just as Ofsted used to be, whereas now, they ring up on a day from Monday to Wednesday, and are then in for the next two days, so if you are not doing something then it is too late to change it. I think this is a good thing, whereas what we just went through is definitely not. So, on the Friday, Friday 13th by the way, in they came. I was observed at about 9.30 doing my carpet session. We had been telling the Christmas story all week,  using my little peg doll nativity, and on Friday I had planned to have the children telling the story through movement-flying like the Angel, trotting like the donkey etc. We were doing that part as she walked in, and I was behaving like Joyce Grenfell on speed, or at least that is how it felt. I can only describe my emotional state as one of fear and panic. It is ridiculous when you actually analyse what is happening-one adult observing another doing their job, hopefully all with the best interests of the children at heart. The trouble is that is not how Ofsted feels, it feels as if you yourself are being judged as a person, not just at how you do your job. At least that is how it feels to me. I heard the inspector talk to three children before running off outside with those who wanted to go. She said the same thing to each child-" Hello, what's your name? How old are you? Can you show me that on your fingers?'' Presumably just an ice breaker as they are all pretty much capable of that! Anyway, the result of the inspection is that we failed and if it had been a real one we would now be in special measures. Foundation Stage failed on safeguarding-because one of our playground gates was open as the kids were coming out. This gate is always being left open and you can check it one minute and the next someone has used it and left it open again. It is ironic anyway because the gate is attached to the wall that surrounds our playground. It is a low wall and the grass area is over the other side. Children can easily climb up onto the grass area. If you follow the grass up-the wall continues around it and is low on the grass side, then you reach not only the other side of the gate, but a four foot, drop at first, increasing to about a six or seven foot drop where the stairs go down to the bottom playground. I have pointed this out to the head and others concerned with health and safety but we have not as yet got a fence where we want one (along the grass side of the wall). So, any child could not only escape, but could fall off a high wall. In fact it would be safer for them to use the gate as then at least they could use the stairs! We do not let them up on that area yet because of the danger, but it could happen. The other safeguarding issue was the fact that some children were putting on wet coats because we keep our coats outside-they are under a shelter but do not dry off easily as they are all crammed onto a coat rack, and in my class a dressing up storage unit. This is because we do not have coat pegs in the class. Where to put them has been endlessly discussed but we still do not have them one term in. All the other classrooms have built in coat storage, but for some reason nursery does not. I could go on, and this sounds like a massive moan, but I am only just now recovering from the whole thing. It basically spoilt the last three weeks of term when it should have been a lovely time. I had to change my two days off this month as it clashed with the inspection, so have had Thursday and Friday this week off. Although I have been busy I have been so relieved not to have to go into work. We had the class party on Wednesday and the children really enjoyed it so that was a good end to my term at least. I am trying not to think about after Christmas when we will be dealing with the aftermath of Ofsted ,whilst still waiting for the real one, which we are due. I think if they had just turned up in that week, without everyone having the time to get in such a state, then we would have done much better. I suppose a gate still may have been left open though! I have not had my individual feedback yet, and I don't particularly want it as I am fairly certain it won't be good. Anyway, all of the above explains why I have not been blogging. No time and I did not feel remotely like it! Below are a few pictures from the last couple of weeks, in no particular order and not really related. Just ones I thought of sharing and then never did. 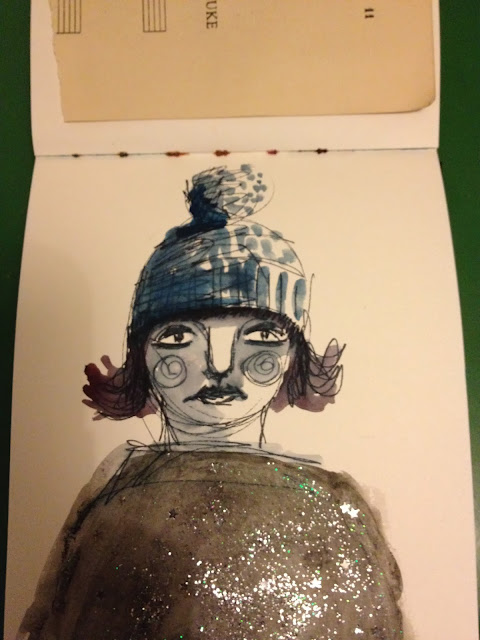 Miserable looking girl in a hat, similar to my new hat (bought to replace the one I lost in the taxi after a night out last weekend-too much wine and my hat was gone!) I realised I had bought a hat that looked like those I put on girls I draw. Life imitating art! 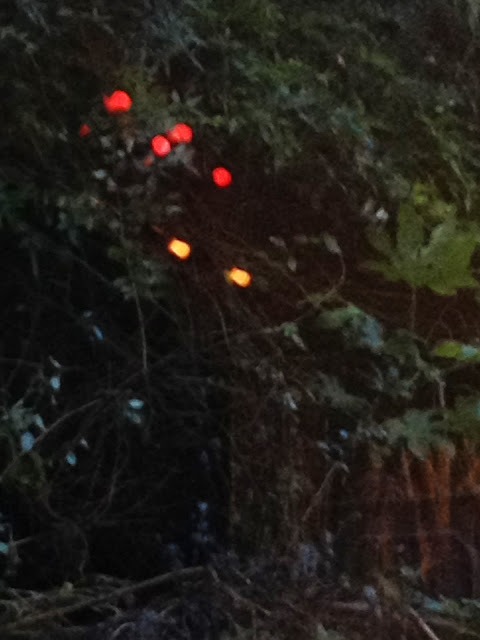 Indoor lights reflected in the dark green of the garden. 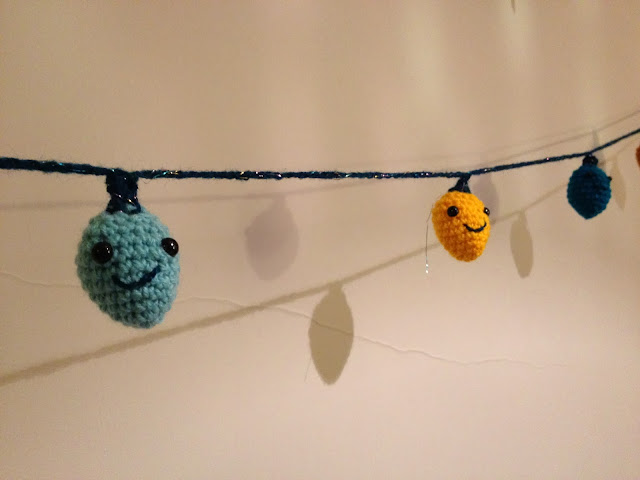 Crochet lights from a pattern LInda Sue sent me. They are really quite cute, and now on the tree. 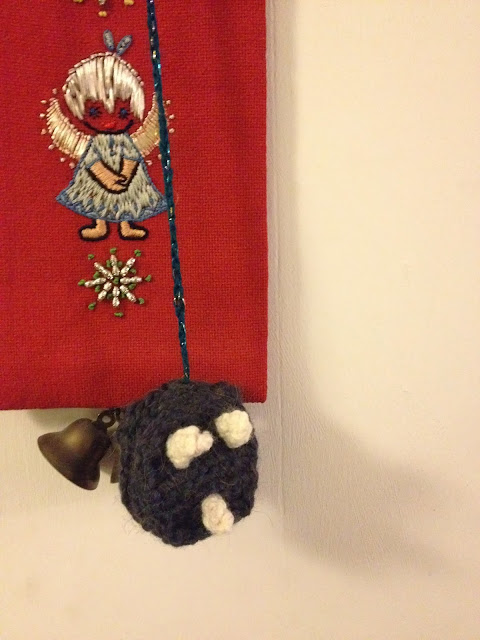 A semi-successful attempt at crocheting a plug for the lights. 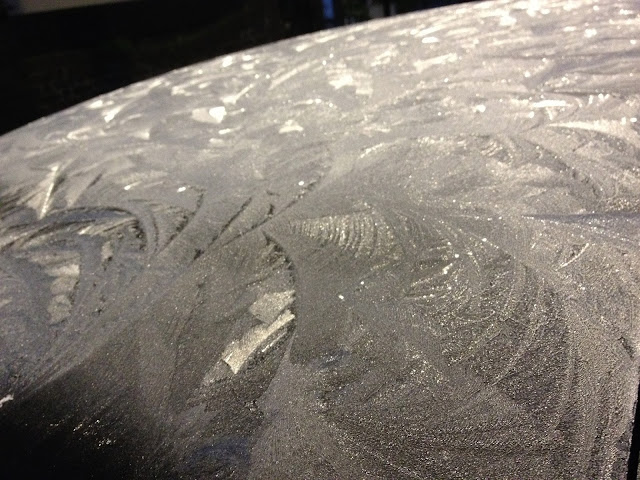 Amazing frost patterns on my car on the 12th December. It looks like the surface of the moon. 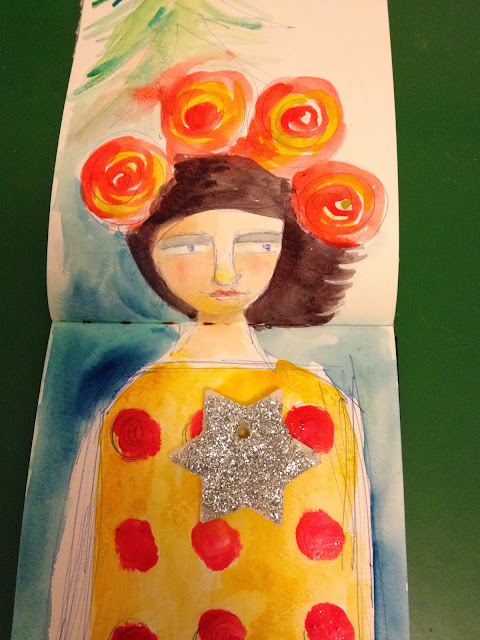 This girl started with the red dots-brusho mixed with pva. The star is a salt dough one we made at school. 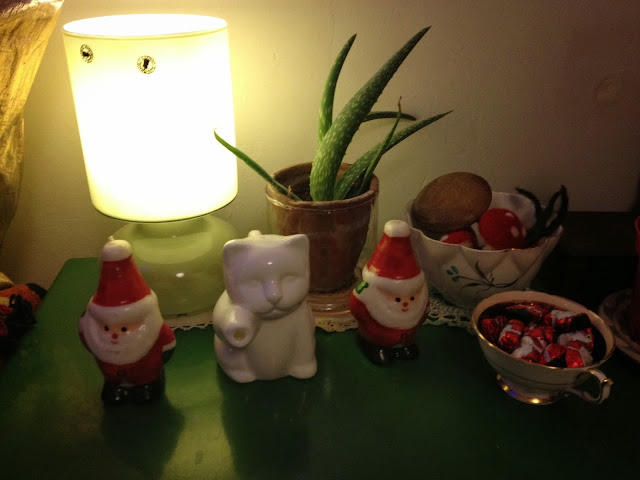 Christmas table. The little Santa candles were 20p at the boot fair. 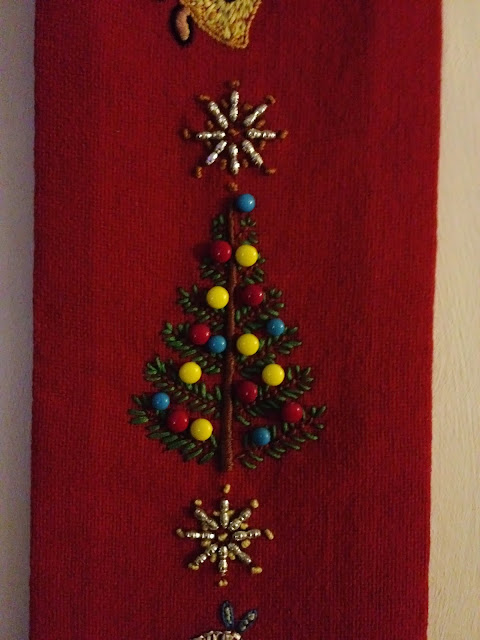 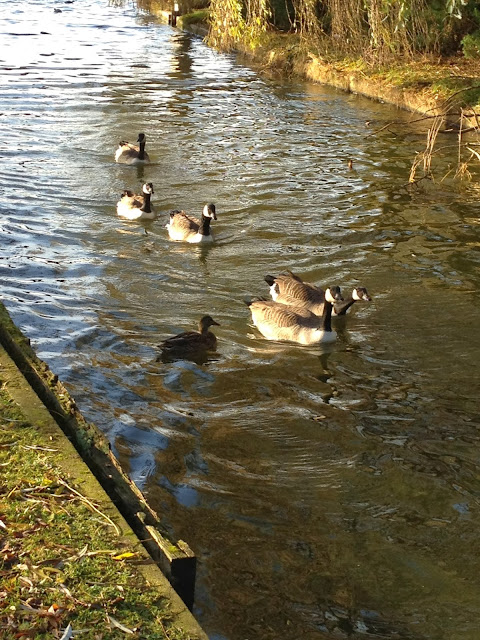 Geese, ducks, coots and a heron at Thamesmead last weekend. I went to the boot fair on my own then walked to look at the water. The heron was a young one and not at all scared. All the other birds were positively over-confident-expecting me to produce some bread for them I think. 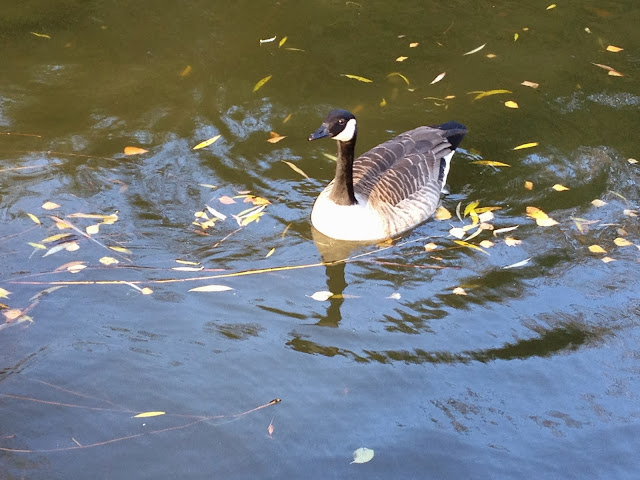 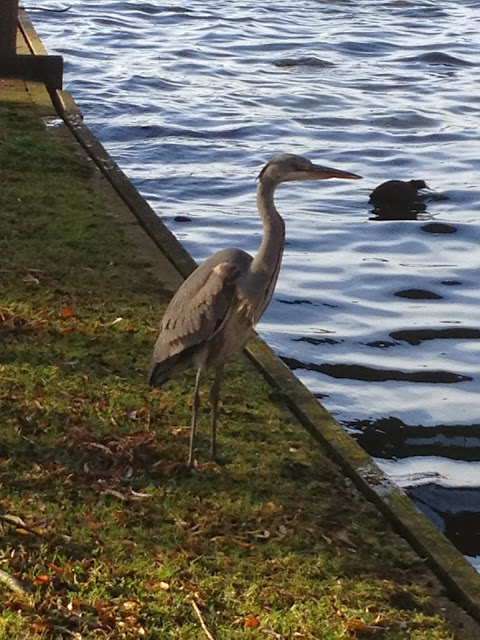 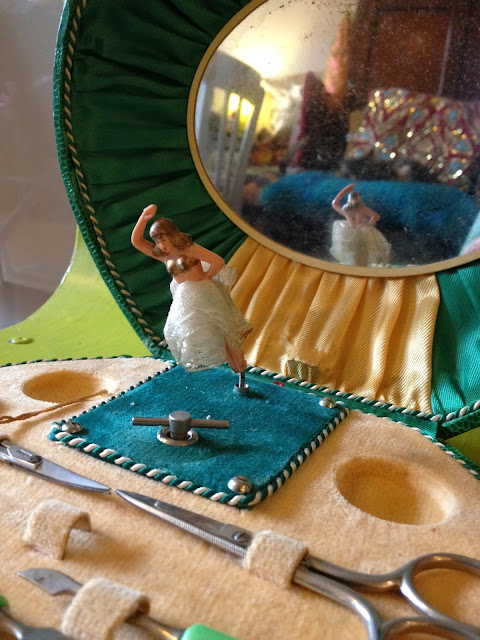 Best bootfair purchase for £1. A musical box manicure kit with ballerina. It works too, though is slightly reluctant to. 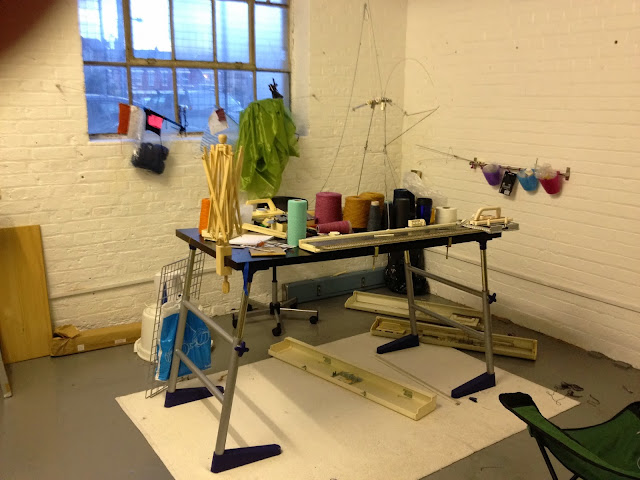 We had a craft day last Saturday. This is my friend Cleo's studio. She gave me and my other friend a knitting machine tutorial which was fun. I can certainly see the benefits of a knitting machine but would be a bit in fear of all of its intricate little parts. 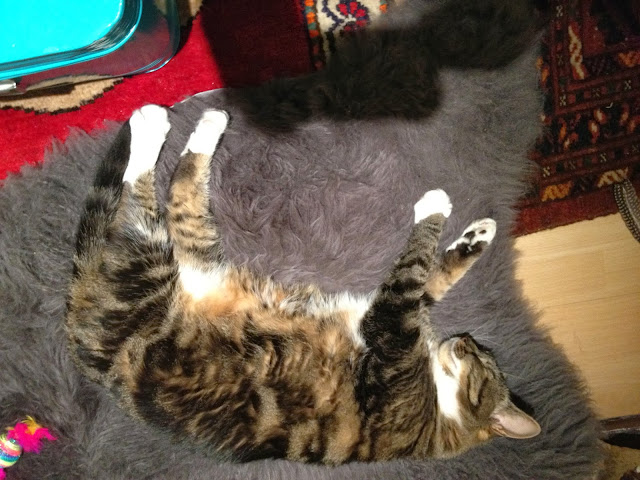 A very tired little cat after lots of chasing the feather on a string. 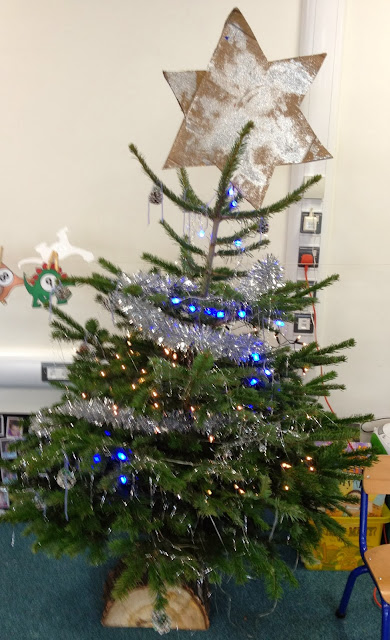 Our class tree with its enormous star, pinecone decorations and child scattered lametta. On the day we hung the pinecones, one of the children was standing there singing a Christmas song to himself whilst trying to tie on his cones. It was so sweet! I videoed him but sadly cannot share that kind of thing here. The tree will have to do!
Posted by Sarah at 17:46

I like the look of your seventies wall hanger, more pics?

I also like the story of the boy singing as he's hanging his pine cone decoration. Having a class Christmas tree and letting the children make the decorations for it sounds a lovely idea, space permitting of course!

Sorry to hear about the Ofsted visit. It sounds extremely stressful and, as you say, would completely spoil the run up to Christmas which is usually a special time at school. It sounds like you've been unlucky. As to the gate, could you not get one of those springy hinges fitted so that the gate self-closes, like the ones they use in toddlers' playparks? Otherwise, there's always a risk of it being left open (though need for a fence does seem to play down the importance of the gate).

Have a lovely Christmas, and I hope all gets sorted in 2014!

So sorry your inspection was a depressing experience. From everything you write I really feel your school must be a great one for the kiddies.

My experience with the inspector was even worse.
I was teaching English at The Friern School in Peckham Rye circa 1973. I had not yet done my teacher's training….. I spelt 'sentence' sentance on the board.
They were awfully nice about it.
I'm a miserable speller but think I was an encouraging teacher.

What a nightmare with OFSTED and just before Xmas.I am so glad I have retired from teaching.I always felt as an early years teacher that I got every child to reach their potential but am sure I would have gone to pieces in front of Ofsted!Not nice but try and enjoy Christmas and I am sure you are a wonderful teacher and the children adore you.

I am so sorry that this was inflicted on you so close to Christmas. I hope that the holidays will give you some well needed recuperation time. Just take it easy, spoil yourself and others. I hope your Christmas is good.

Hi Sarah, sorry to hear about your horrible end of term inspection. From what you say, I always think that you sound like a fantastic teacher. Hopefully you can put it behind you for now and enjoy Christmas. The beady Christmas tree is nice.x

Thanks everyone! Your comments are much appreciated. I feel better about the whole thing now as there is no point worrying about what has already happened.

Sarah, oh bless you for that horrible experience, why oh why can they (Gove and his minions) not understand that we treat children with the utmost respect and encouragement in order that they feel safe enough to try new things - and yet the adults in school are treated as if we go to school each morning to skive and waste everyone's time! It breaks my heart that you have been left with such awful self esteem feelings. As previous people have said you sound like an amazing teacher - as I KNOW I AM, but have had the stuffing knocked out of me over too many years. The gate and fencing issues are actually not YOUR responsibility but hopefully the management at your school will sort that before the real bad guys come in. Like you said, I believe the new system is better, less time to worry and surely a more realistic picture, but most schools are being judged less highly because of it. In the past I can remember being told to CANCEL a holiday booked over a whitsun half term because OFsted were coming on the first day of the new term. Most people did, including me. How sad.