The bits and pieces are mainly cats, crochet and Christmas. I have spent the days since finishing work cleaning, making presents, cooking and a bit of shopping. We had Andy's Mum over for lunch yesterday which was lovely. Then we had our old neighbour staying last night-he is the landlord of the upstairs flat now as he and his family now live in Nottingham. On Saturday night ominous water stains started appearing on our bathroom ceiling, made more worrying by the fact that the neighbours seem to have gone away for Christmas. So our old neighbour had to rush down yesterday from Nottingham to sort it out. It turned out to be their toilet tank which was overfilling as the ballcock was not working. He had a go at fixing it and then the plumber came this morning so it should be fine. I spent most of today doing my half termly tracking which I now have to upload onto a new system we have called O-Track, on the internet. I didn't have time to upload it but can do so after Christmas. Then I cleaned and did washing (am still doing washing) so that tomorrow all I have to do is wrap presents so I may even have a little lie in! I am going to be very organised and watch a good film whilst doing it to make it a fun experience! We are off to my Mum's this year for Christmas day which I am looking forward to. Then my Dad's on boxing day and then my sister may be at home the day after boxing day so up and down to Kent I will go! 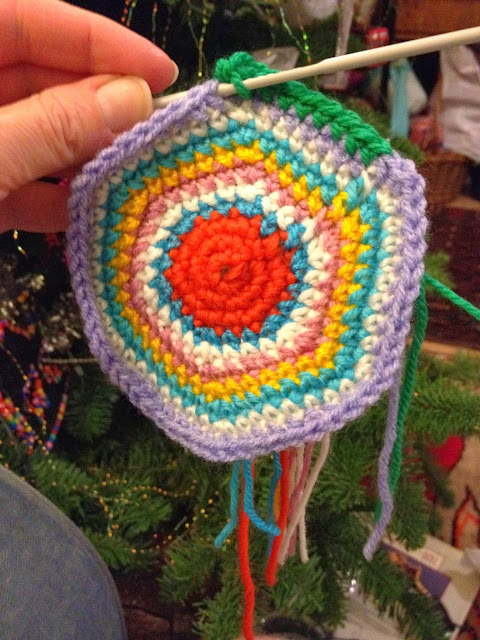 I am making little coloured circles without any plan as to what they will be. The only problem with the multi colours is that each circle has 12 ends to sew in. 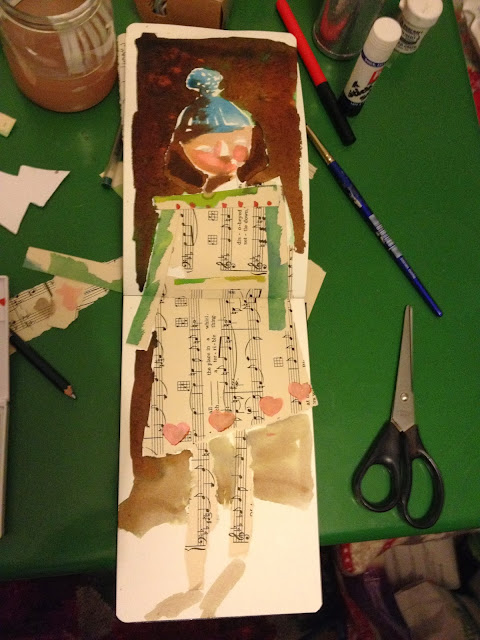 Another person wearing my new hat. This one made from left over music paper from the cards, watercolours and whatever brusho was left in the palette. 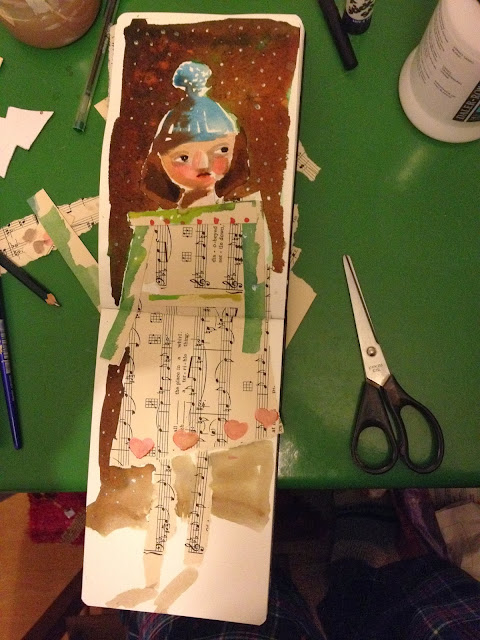 She looks as if she is listening to something in the snow. Probably sleighbells. 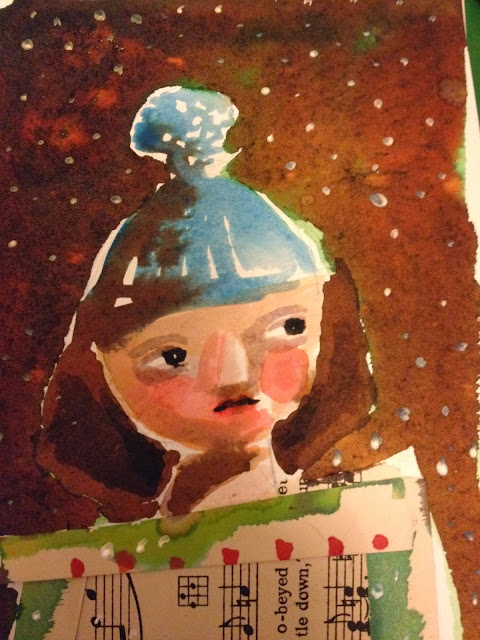 This is a felt doll face which I have had for a while but not displayed before. She is currently in the changeable string picture frame. She is in front of a pretty Linda Sue picture and next to a giant leaf I brought back from Mallorca. 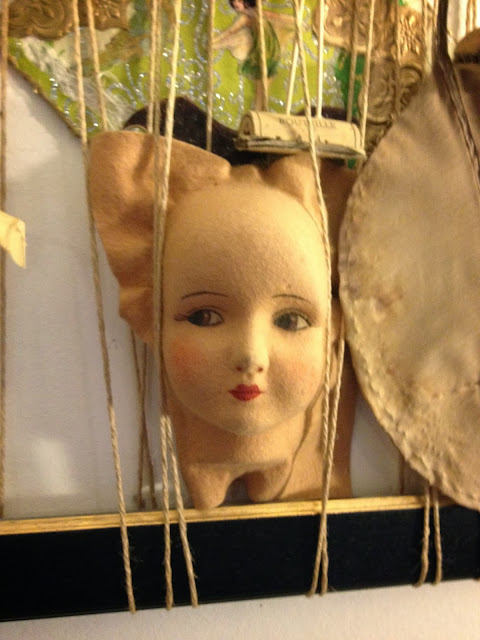 As both me and Andy had somewhat lost our mojos last week, it suddenly came into my head to crochet one. I thought a mojo would be colourful, soft, bright eyed, smell nice and make a good sound. It has lavender and tiny bells inside and is made of soft and cuddly wool. It likes it in the doll tree. (It is an 'it' because I am not sure if it would be male or female) 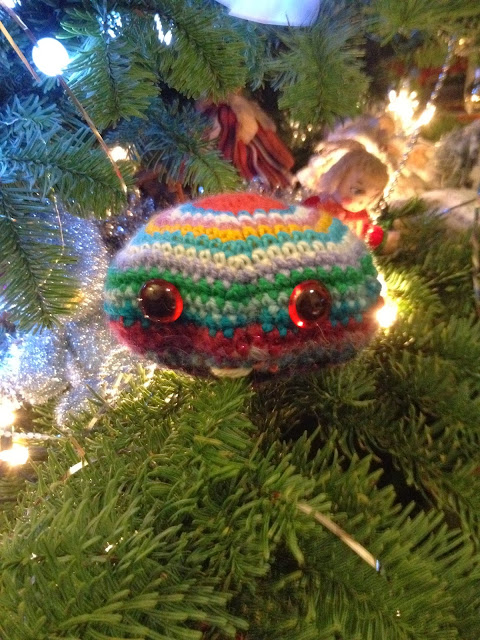 Cassie caught mid-yawn. She had a very stressful day yesterday hiding from visitors. I did drag her out of her hidey hole drawer (even though I would never normally do that) as Andy's Mum really wanted to see her again. Last time she was here Cassie was a fearless big kitten. Now she is a cowardly big cat! 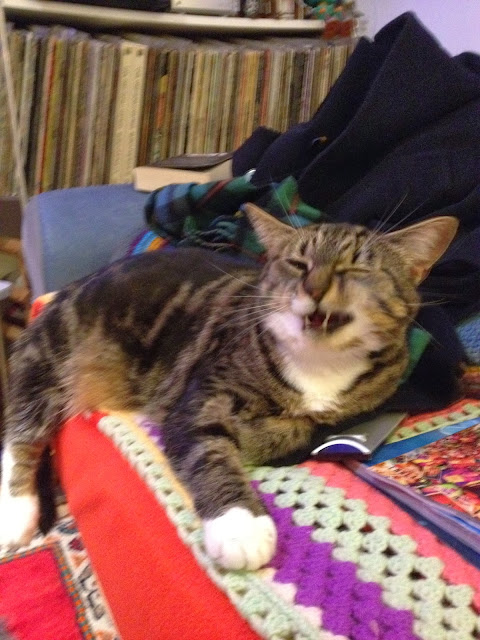 Lily getting too close to the camera. 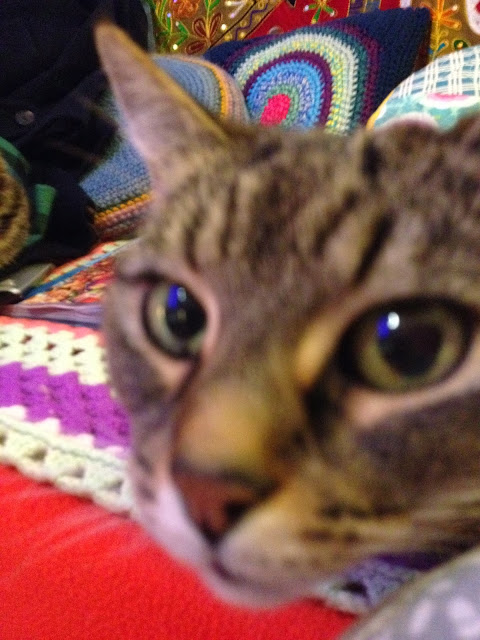 Cassie and Lily proving that they can get on some of the time! 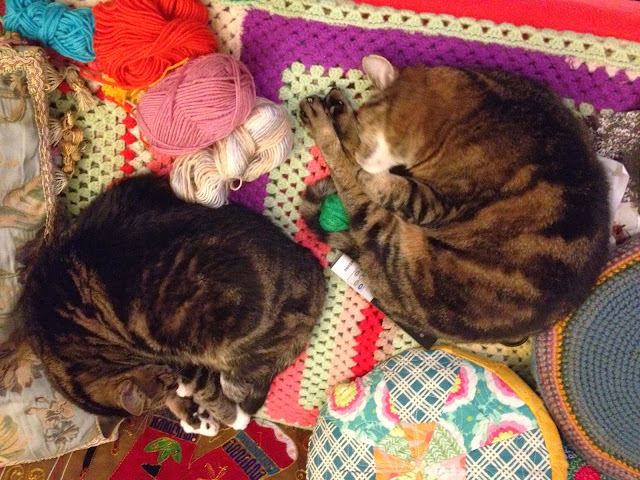 Tiger on the G-plan stool. I don't know if I have ever showed the G-plan stool on here. I love it! It was a bargain from a great and weird charity shop I recently discovered in Rochester. I jazzed it up by crocheting a suitably seventies looking cover. Tiger and Lily love to sleep on it as it is big enough to stretch out. 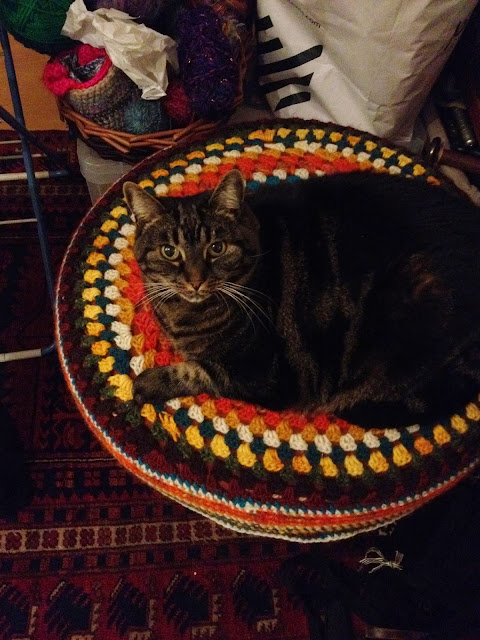 Tiger again in the middle of a string spillage. 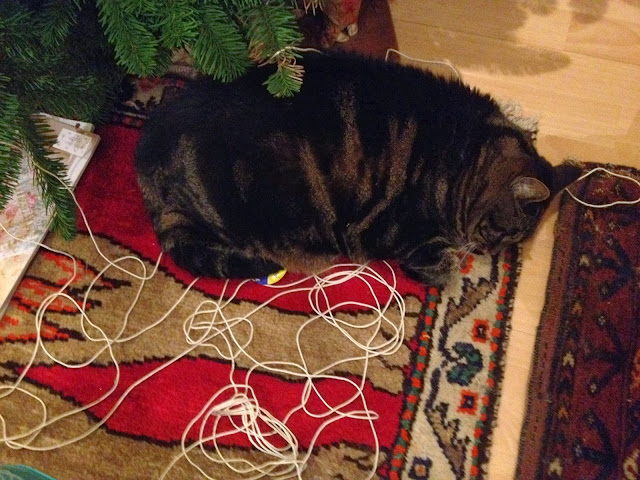 Do you know what these are? They are Quinces. Aren't they so beautifully yellow? I needed them for my Christmas pudding recipe (Nigel Slater's) and the local grocer had them. I didn't know what they looked like-there was no picture on the quince jelly I once ate! You can use apples but he says quinces are better. They smell apple like but tangier. 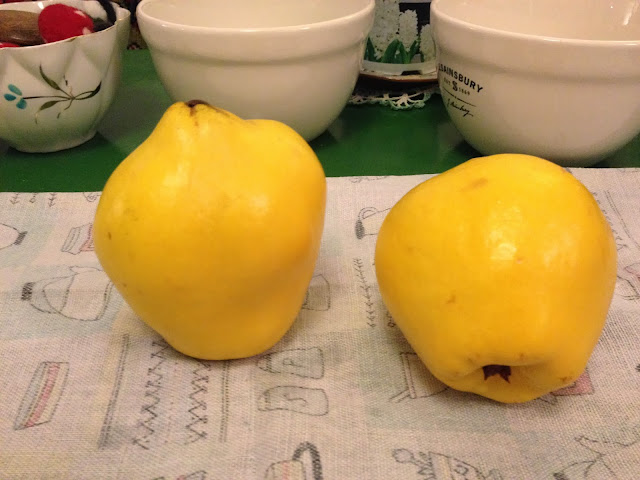 I had soaked the fruit in brandy for a couple of days-it was meant to be one day but I didn't get time to make the puddings as planned. I started optimistically, grating the quinces and measuring out the other ingredients. Then I got to the part about breadcrumbs. 250g is ever such a lot of crumbs. When the only method you have of making them is a grater,  it is a bit of a task. There were crumbs everywhere. 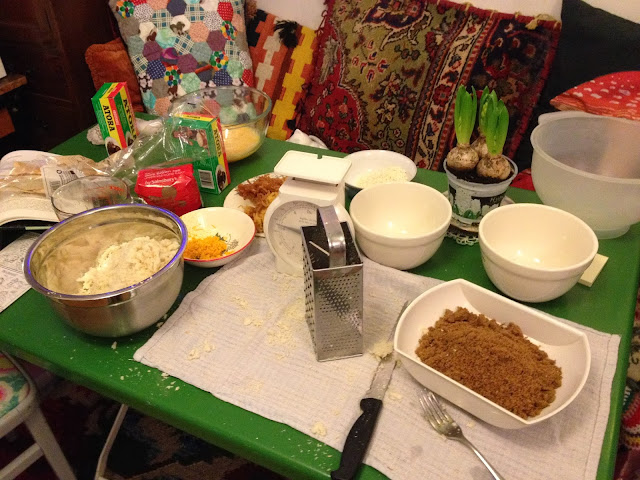 Nigel mentions using a 'very' large bowl to do the final mixing. I realised that my normal cake bowls do not fit that description. I didn't want to use my playdough bowl as it has also been used for wet felting, so I had to venture into some rarely opened drawers where a big blue salad bowl lives. The first drawer I opened on my search would then not shut, as loads of the paper items in it had gone down the back. Anyway, ten minutes later I was back at the table mixing in the big bowl. By this time it was 10.30 and the first steaming has to be about three hours. I was in bed by two! Andy's Mum said she used to cook hers in a very low oven which worked just as well as the steam. I may try that with the second cooking for one of them. The mixture made three normal sized puddings-I think my bowls were smaller than those suggested. They had better taste good! 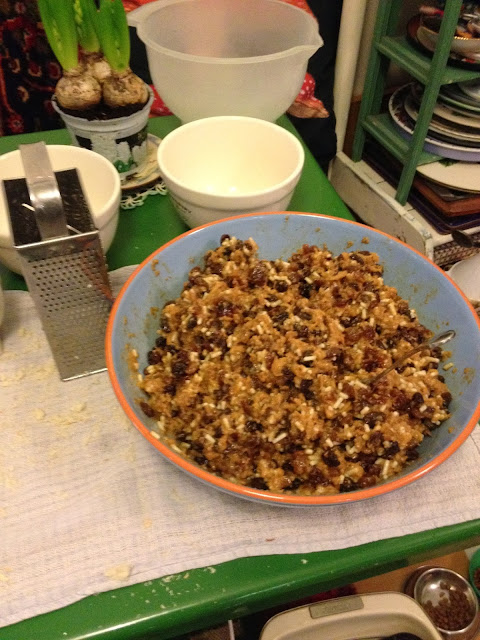 The weirdest shaped grapes we have ever seen. Very sweet lovely flavour though. 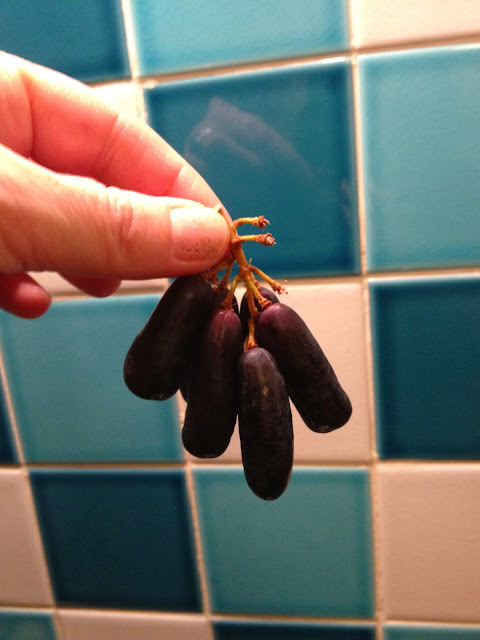 I wish you a very merry Christmas and a happy new year! xx

Mojo has a lively personality!

sarah, i'm impressed that you made your own mojo. damn.... i believe i'll have to start making my own too.

I just saw this particular post. Mmm, quinces are great and this photo of your culinary adventures are tantalizing! Looks like there's always something fun (and occasionally tasty) going on there.