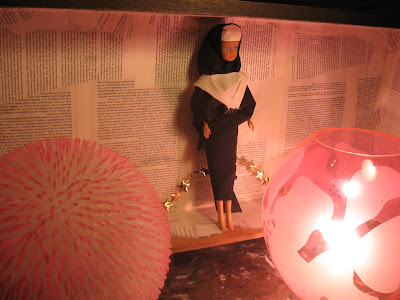 This is my fiftieth post and Barbie turns fifty this year so I have combined the two things in one place! I have never owned a Barbie. Her competitor Sindy was my doll of choice in the seventies and I also had a Pippa doll who I absolutely loved. She was tiny-about 6 inches high. Considering my doll obsession now though, I wasn't really into dolls. I had four that I can remember-Julie(a big doll who had a record in her tummy-you pressed her belly button to work her), Betty-a baby doll who looked like an old lady (hence the name maybe?), Sindy and Pippa. I read a very interesting article here on Sunday about Barbie's history.
Here are a few things from there that you may not know about Barbara Millicent Roberts:
1. She brings in $3.3 million dollars a year for Mattel.
2. Three Barbies are sold every second.
3. Twelve hairdressers are employed for Barbie
4. Mattel toys was started by Ruth Handler and her husband Elliot who had come from Poland to the States after the first world war.
5. Barbie's body shape and measurements are based on a German doll that the Handlers saw in Switzerland whilst on holiday. She was called Bild Lilli and was a prostitute from an adult cartoon. She was being sold as a novelty to men I might add-not children.
6. Barbie has had over 100 careers, including Marine Corps Sergeant and, my favourite, a T.V. chef. (Barbie Oliver?)
7. There is an altered Barbie exhibition every year in San Francisco.
8. There has never been a Barbie nun.
Well, there still isn't I'm afraid. But there is a Simba toys Steffi Love nun, dressed by me. (Steffi comes from Deptford market, was meant to go to school but never got there)
I was informing my colleagues at work today of the interesting 'never a nun' fact and Marianne so rightly pointed out that a Barbie nun would have a pink habit. Of course, why didn't I think of that last night?! So I posed her with some pink accessories to make up for her sober habit. The pink lamp was a present from Marianne actually, I think she has a thing for pink! 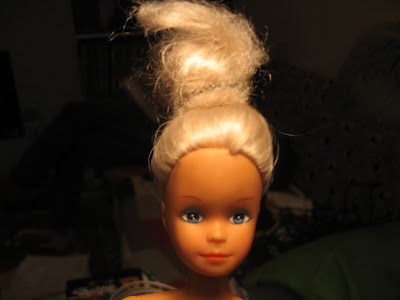 Steffi before her transformation. 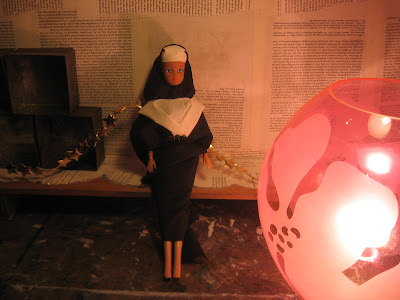 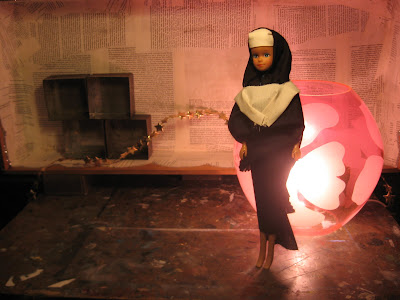 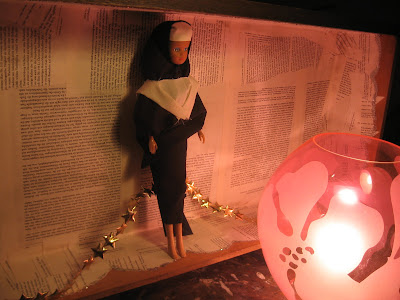 THE PART OF THE POST BELOW WILL MAKE NO SENSE AT THE MOMENT AS I CANNOT UPLOAD THE RELEVANT PHOTO DUE TO AN 'INTERNAL ERROR' I HAVE BEEN GETTING QUITE CROSS AND FINALLY GOOGLED IT AND IT SEEMS IT IS NOT JUST ME. WHEN IT IS SORTED I WILL PUT UP THE LOVELY BALL PICTURE! THE BALL PICTURE IS THERE NOW.
In the interests of reaearch I popped into a toyshop on the way home tonight to have a look at some actual Barbies. I was disappointed with the selection but I did come away with this rather amazing ball thing. I wish I could blog texture-it feels great-soft, rubbery and squeezy. Forget those tiny stress balls, this is the baby. And when you drop it on the floor, a tiny ball inside it lights up in different neon colours. It is also destined for school and I think I had better take it as my cats do not approve. Tiger is what I would call highly suspicious and Lily is petrified!
Posted by Sarah at 12:33

I had a couple of Barbies. I don't remember which ones as they are long gone. I played with them quite a bit.

The ball you found in the toystore sounds interesting.

We have had balls like that- we bounced the light right out of them! My son used to play with Barbies- in provocative ways to be sure- she is a total whore but she works hard being an astronaut, pediatrition,dog groomer...If you gently torch her she melts in interesting ways.

I think your doll is cooler than any Barbie!

The ball is great Liz. I don't want the children to have it!
That's funny Linda Sue! I am almost tempted by torching but not quite!
Thanks Elizabeth!

Your second photo is my favorite. I think you've done a fine tribute for your 50th post! Thanks for visiting my blog and your well-wishes. :)

Barbie was never on my radar or my daughter's. Why? I don't really know.
There was something about her disturbingly...unsettling. As if the peroxided hair hid a brain made for something other than thinking. Thank goodness I never transferred that to any peroxide blonde I met in my life!

So Barbie is only a couple years older than me, almost to the day! I had Barbies. I had one of the original bubble hair ones and one of the original pony tale one. I also had a few Ken dolls and Barbie's friend Midge and the two girl Barbie's - Skipper and .... hmmm, I can't find a reference to Pepper but I'm sure I had one called Pepper. I think I had a Francie too. Can you tell that I'm OLD! LOL! I came home from junior high one day to find my mom had given all my Barbie's away to some poor kids down the block. I was really sad but didn't have the heart to ask for them back. Have you ever seen the youtube short film The Red Fairy - La Fe'e Rouge? It's about refashioned Barbies.
I bought some of those balls, or something similar at least, for the grandkids. Their favorite aren't the soft ones though, but a hard rolling one that lights up and has a Jolly Roger image on it.

Happy blog fiftieth. From an inauspicious start - Deptford market and playing traunt from school - Steffi has really made good to pass through her postulancy and noviate.

That's really frightening Allegra!
Poor you Laume losing your Barbies like that. I will have a look at that film tonight, sounds great!
Ha, ha, ha, ha Roddie! I do not know ways to write laughter convincingly but it made me laugh!

Sindy was the doll for me, too. That's what mum bought me and I was happy even though all my friends seemed to have barbies. But mum made me lots of "blue peteresque" furniture and clothes for her. And they were beautiful. I remember so fondly just loving having such great accessories that you couldn't buy. Yay for creative mums! Oh and I had a pippa doll too.

Your Mum's accessories sound lovely. Is 'blue peteresque' a fabric? I used to love making things for the dolls I had-chests of drawers out of matchboxes and beds out of slightly larger boxes! My sewing skills were quite rudimentary but I had a go at clothes-mainly tying them on.