More random pictures from recent weeks. This week has been great, if a little worrying at first. Last weekend, Andy came down with what seemed like a cold. He didn't have a temperature, but he did develop a persistent cough. I suggested he try one of my lateral flow tests. He was non-commital. Then, at my break at 10.15 on Tuesday, I got a text from him saying that he had decided to go for a proper test, and that the NHS person had said that I should self-isolate too, until the result was back. After going to see the head teacher, I set off home at 10.35. Traffic is so light at that time compared to my normal time, so I was home by about 11.20. I couldn't work Wednesday, and the result was still not back on Thursday, so I couldn't work Friday either! In the end, Andy rang the number on his paperwork, and he was told that he should have registered the test by ringing up to do so. That was not explained to him. He then got the result straight away, which was negative thankfully. But in the meanwhile, I have had a lovely week off work! I will get paid for Tuesday, but not the other two days, but never mind. The time was better. I also got three cat bookings yesterday, as restrictions on foreign travel are being lifted for a limited number of countries, so my money top up is back!
Anyway, onto the random pictures! 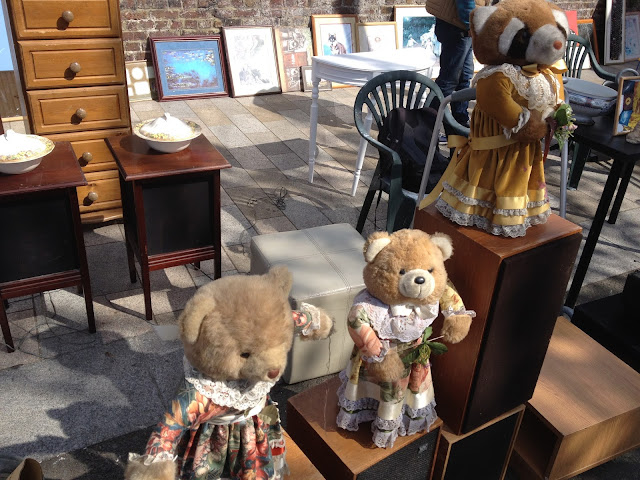 Deptford market in the holidays. Always fun to look around, and it recently reopened. These bear ladies looked so cheery in the sun. I also went yesterday as I was fed up with sorting and packing boxes and felt like a break! I found the best things! I probably should not even go as more stuff is not necessary, but I did, and there is always something good. The first thing I picked up looked like a Coronation (George VI)  souvenir book, and I am reading the book about the young Queen Elizabeth, and wish it had pictures. So I thought it would be interesting.  When I got it home, I realised that the front part is the souvenir, and it is attached to an amazing scrapbook from the 1930s, all about the coronation, the abdication, and various royal related things. It is fascinating and has lots of pictures to fill the gaps in my book. I will post some pictures later on.

Then I looked in a box of old stuff on the ground, saw something rusty and pulled it (them) out. It turned out to be a pair of rusty old skates.  The man I bought them from claimed they are Victorian, and pointed out the front which he described as Dreadnought shaped like the boat. I am guessing that you attached your boots to them. I found out through google that they are adjustable ones. I love them. Completely useless for anything but I love them!

On the bear lady day, I found and bought a schoolboy's diary from 1945. This will be interesting I thought. It wasn't! Not a mention of the war, and after the first month when the boy made at least a little effort to describe his life, he just wrote either "school", or "played" on the following pages and gave up altogether by March! He did write, "My birthday", on June 26th! 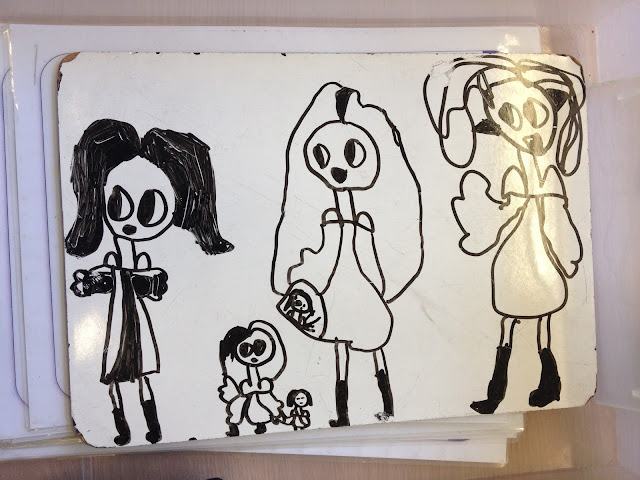 Next, two drawings from Reception children. I love the girls on the first, and am impressed by the way the figures are drawn. They fill the page, convey relationships through size, and are in proportion. Look at the eyes too! And I think that the person in the middle must be her Mum, who is pregnant, and this girl is always talking about this and wishing the baby was here! 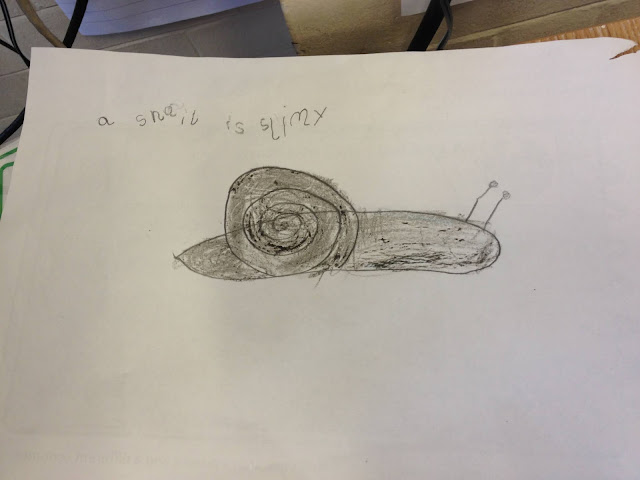 Then there is this snail. It is so delicately drawn, and I like the way it is just pencil, with lots of interesting marks. 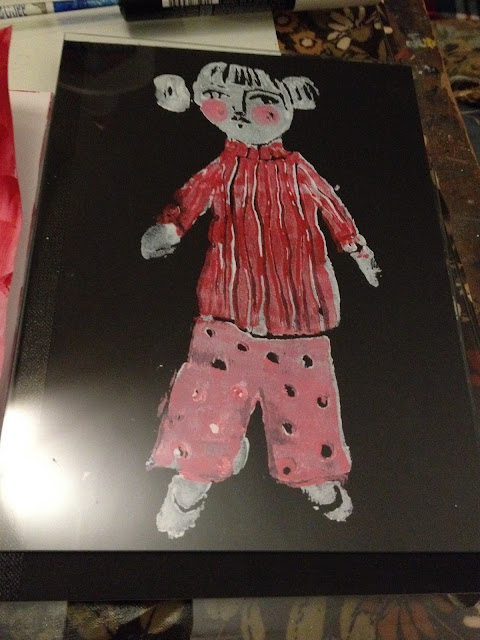 The great thing about sorting through years of stuff, is finding the things you know you have but that are lost. I found my packet of polystyrene tiles for making printing blocks, and so this person came out. I used acrylics to print her, as they dry so quickly and I am impatient. I did find my printing inks too but they can wait for another day. 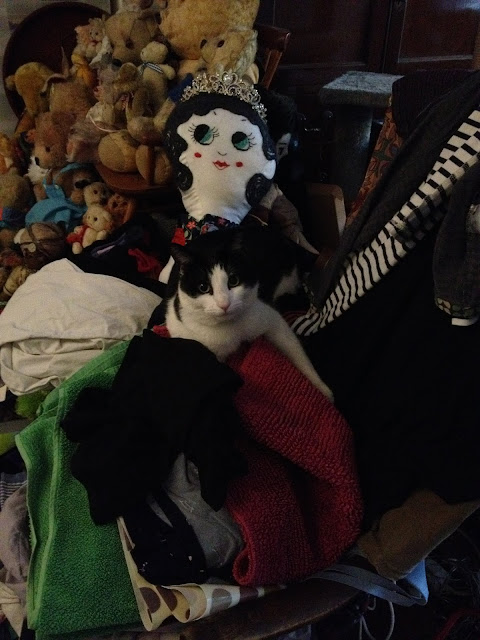 This is my favourite picture of Eddie. He is sitting on a pile of clean washing, and looks cute, but I only noticed afterwards how his little black and white face echoes the doll face behind. It is a big face, just a head, that I made to go on top of a wire clothes form that displayed some scarves I made. 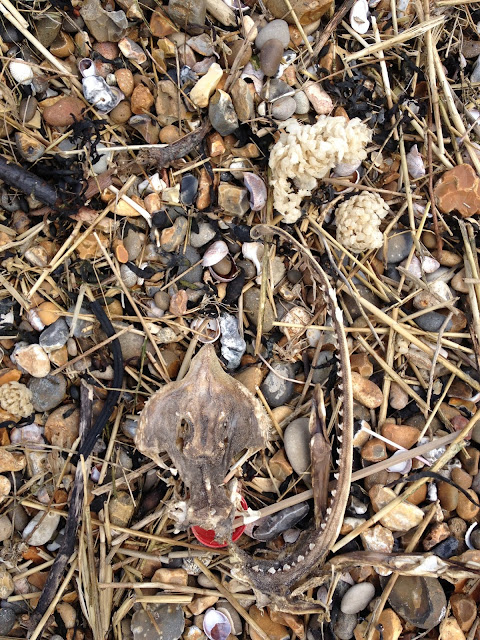 This dead creature was on the beach at Sheerness last week. Andy thought it was a ray. It has spikes like teeth on its tail. 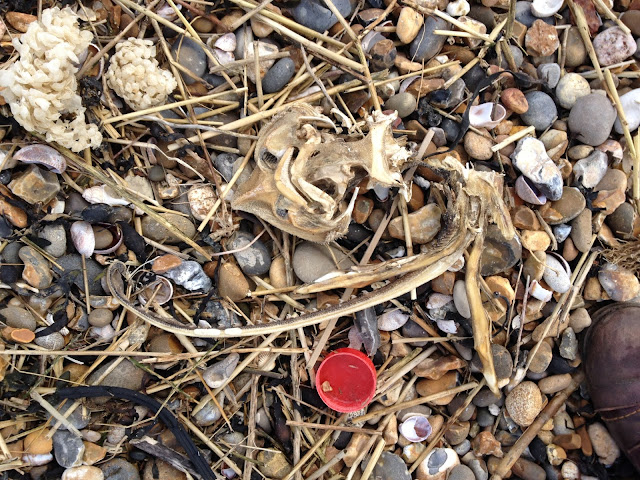 Then this strange alien mouth underneath. 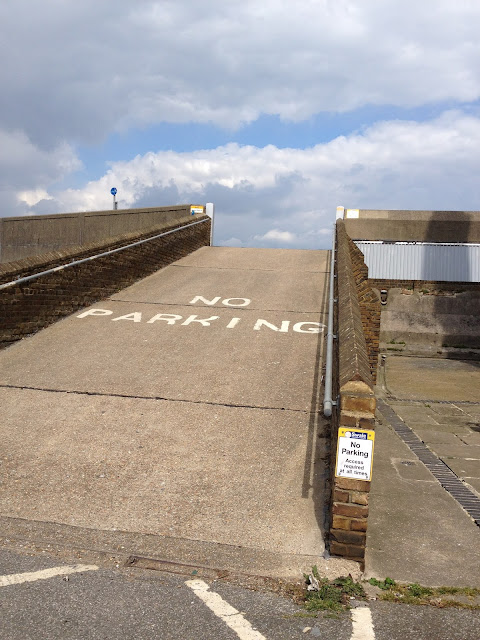 This no parking sign looks like it is on a launch pad! On the other side is the seawall and the beach. 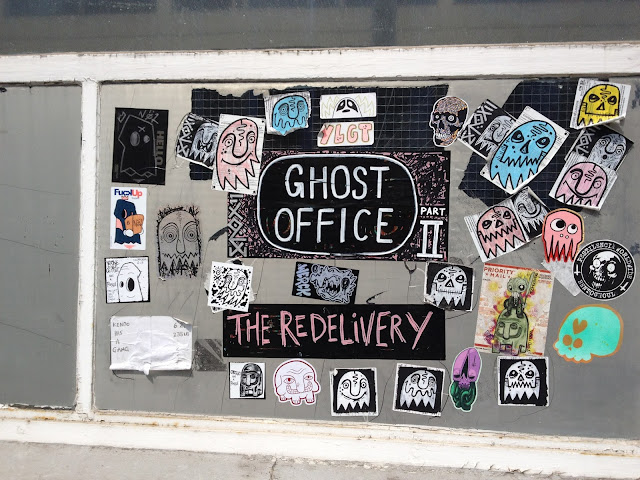 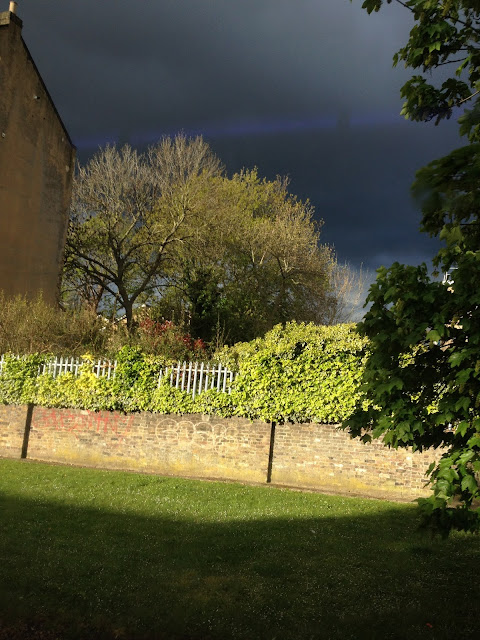 The weather has been all over the place this week, with lots of rain, high winds, and quite cold. This was the view from my bus on Tuesday morning. I love it when the light is like this, and it is always fleeting, so I am pleased I saw it. 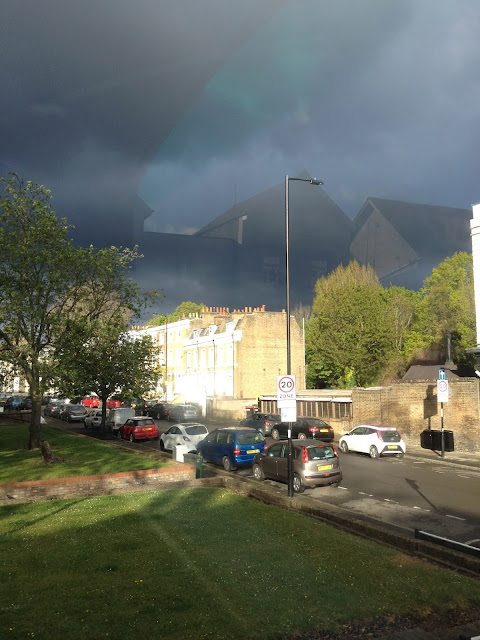 So much here to love! The Teddy Ladies, the ray on the beach, the Ghost office and that sunlit stormy sky is just beautiful.

What a wonderful smattering of LIFE you have posted here!

The girl's drawing is my favorite---wow---the baby in her pregnant mum--and the littlest figure looks like it could be a doll. :)

I love your printed doll too, and that snail is pretty impressive. I like how the words curve above it (like a slime trail?).

Glad to see Eddie, who seems to have made himself entirely at home.
"Dont' mind me, I'll just hold down this clean laundry..." LOL

Wow, that is quite a sky. I love the "Ghost Office" and yes, I would say that is a ray on the beach, though I don't think I've ever seen one with teeth on its tail. The snail drawing and the pregnant woman are excellent! Sorry to hear about your missed work, but thank goodness the test was negative.

Oh, Deptford Market! Mustn't forget that I have resolved to visit it. Thank you for reminding me. I haven't seen your blog for a long while, it obviously wasn't on my reading list for some reason but I wonder why you are packing. Maybe you are moving? I will read a bit further down to see if I can find out! I do love your fleeting thundery photos, very atmospheric. And what a find the scrapbook was!

How did I miss this post?? So full of adventure and marvelous things! The drawing that the little girl had done is amazing, I love the baby in the tummy sort of like alien.
Wish I could have gone with you.

This is a great collection of photos and subjects, from the ghost office to weird sea creatures and cute teddy bears.