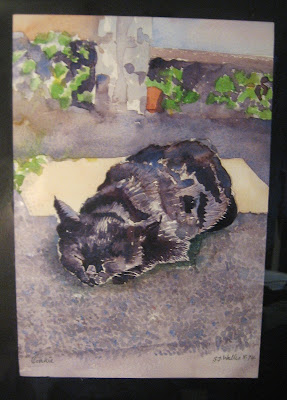 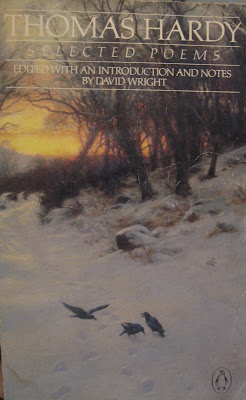 There are two black cats in this post. One is my old cat Connie (named after the main character in 'Woman on the Edge of Time) She was my first cat after I left home. We found her and her kitten, Meep, in a box in our back yard in Leicester. We did try to find owners but they had obviously been left there. One big, scary man came round, just wanting the kitten (Meep was a beautiful grey colour) but we refused. Connie was a beautiful and gentle cat. She had such a lovely nature. She was pure black but used to go a bit rusty in the summer! This painting is of her in our back garden in another house. She had two friends who visited-black and white boy cats who are always friendly. One was called 'One Eye' (for obvious reasons) and the other 'two eye' We also had Meep, Boris and later Halo (after Halo Jones!) It was a very catty house!
The other cat is in this Thomas Hardy poem. I heard on the news this morning that it was international poetry day so I started thinking about this poem. I can find no reference to today in that way on the internet though so I may have it wrong! Andy loves poetry and has shown me many of his favourites over the years. This is one of my favourites.
Snow In The Suburbs
Every branch big with it,
Bent every twig with it;
Every fork like a white web-foot;
Every street and pavement mute:
Some flakes have lost their way, and grope back upward, when
Meeting those meandering down they turn and descend again.
The palings are glued together like a wall,
And there is no waft of wind with the fleecy fall.
A sparrow enters the tree,
Whereon immediately
A snow-lump thrice his own slight size
Descends on him and showers his head and eyes,
And overturns him,
And near inurns him,
And lights on a nether twig, when its brush
Starts off a volley of other lodging lumps with a rush.
The steps are a blanched slope,
Up which, with feeble hope,
A black cat comes, wide-eyed and thin;
And we take him in.
I have had to use colours as blogger will not leave my spaces alone!
Posted by Sarah at 11:11

What a sweet post to your cats and a nice call out for Mr. Hardy as well. He's a fine poet indeed, in my not so humble opinion.

Say, did _you_ paint Connie? Is that your work there? well done, whoever did it!

Meep. What a great little name!
Candace in Athens x

Beautiful watercolor and poem! I wasn't familiar with it at all and love all things cat related as you might've guessed :)

Nice poem. i love the painting of your cat, it's so precious. By the way, I love the header with your work. It looks so nice.

It definitely was poetry day!
I love black cats, we have one, and one of the pair we had before was also all-black.
Lovely painting, black animals are so hard to get just right-sometimes even in photos.

Hi Sally! Yes-all great cats! I didn't know that Andy did that!
How are you all?
Hope all is well with you.
Sarah x

I like the sweet painting of your cat from the past. Happy International poetry day, i had no idea.

That is a beautiful painting of your kitty! Sounds like you have had some wonderful cats in your life.

That poem is wonderful!!! I studied Hardy's poems at uni but haven't given him a second thought since - a million thanks for this one - it's charming! Must get back into him again! I adore your painting and the story of Connie and Meep - you are a fellow cat lover! Yay!

Sarah, wonderful story and poem! Did you paint the picture of Connie? It is a beautiful painting!