Half term was spent working for two days for Arty Party and then preparing for the arrival of some furniture and boxes of things from Andy's Mum's flat. This may sound simple but it has been a massive task, due to my hoarding tendencies and general lack of motivation in the last while to do any de-cluttering. However, I have worked out a theory, and that is that I have always had the good intentions to get rid of some of this excess stuff, but have then been ambushed by school by the end of September each year, and never got far past the planning stage. It was not just the lack of time, but the lack of mental energy to concentrate on any other task than school. I am beginning to realize that that has changed, and I am doing quite well. It is only the beginning, and I hope I don't lose steam but hopefully not. I think I am very good at making stuff fit into an ever decreasing space, and have thus managed to save things (larger things like the trunks in the hall) by doing things such as clearing the understairs cupboard. The two trunks are now in there, along with a lot of other things. I have tackled a corner at a time in the sitting room and kitchen, and have changed the use of some pieces of furniture, for example my small desk now holds all my dies, inks, stamps and embossing folders, and the die cutting machine can go on top of it when not in use. I can actually work in that area, so saving the kitchen table from being a permanent mess. I took the never closed door off the back room as that meant I could put stuff flat against the wall. It is an extremely heavy door, but fits nicely and almost invisibly behind the sofa! I have found a great de-cluttering website called Apartment Therapy to inspire me, and, although some of the stuff on there is pretty obvious, if I already do it I feel smug and if not then I can try it! 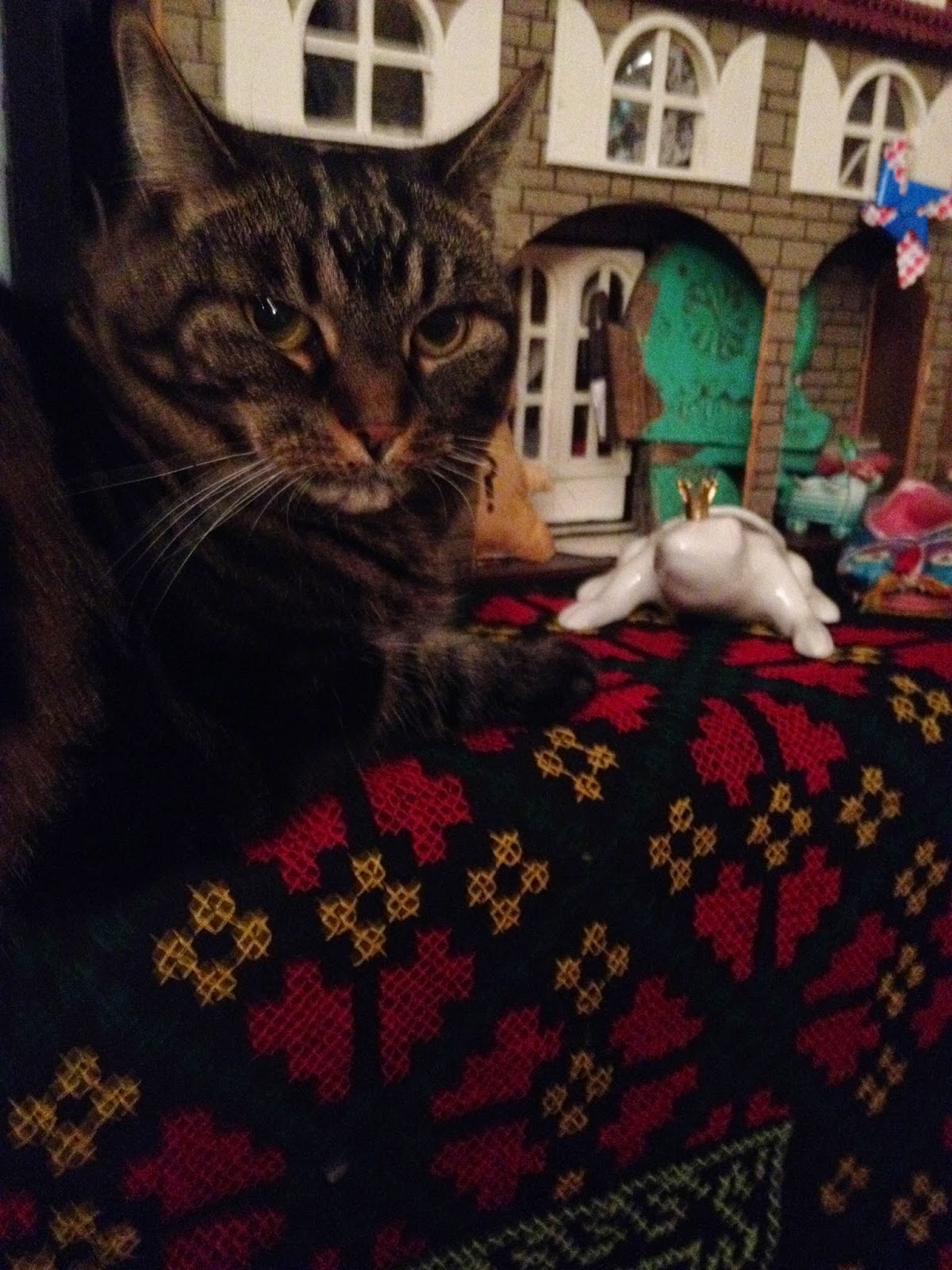 The cats have had mixed feelings about all this. Cassie gets very excited at this kind of thing, seeing it as an opportunity to play more, climb higher, and generally help me out by getting in the way and being funny. Tiger doesn't mind too much, as long as there are new places to sleep. Lily hates it all, and only relaxes when things are back in place. 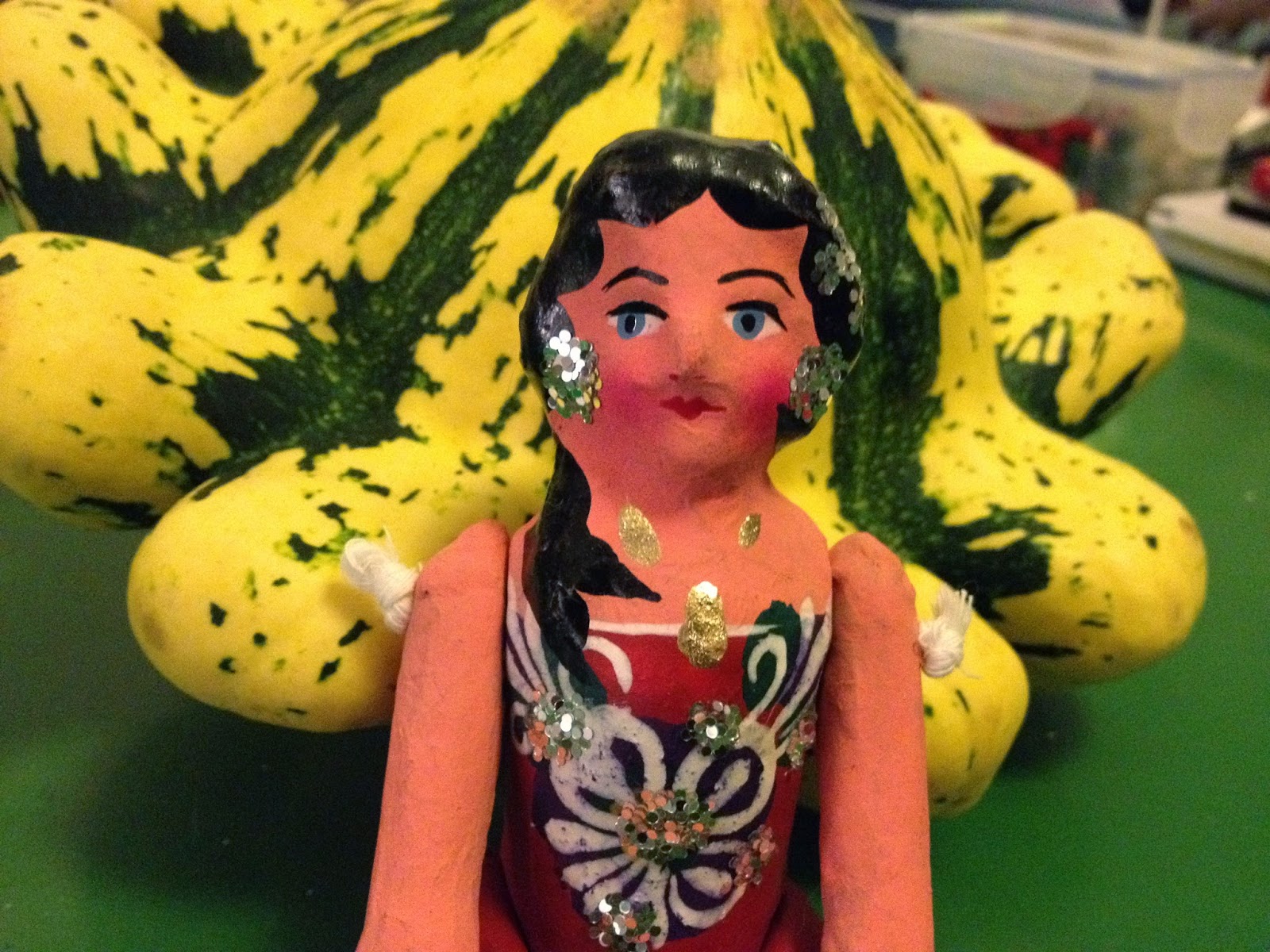 I didn't go for a pumpkin this year, but instead got this Turkish Hat squash which is beautiful and looks good on the newly cleared kitchen table with this little circus doll from Linda Sue leaning on it. She is papier mache and so pretty, with just the right amount of glitter and gold paint. 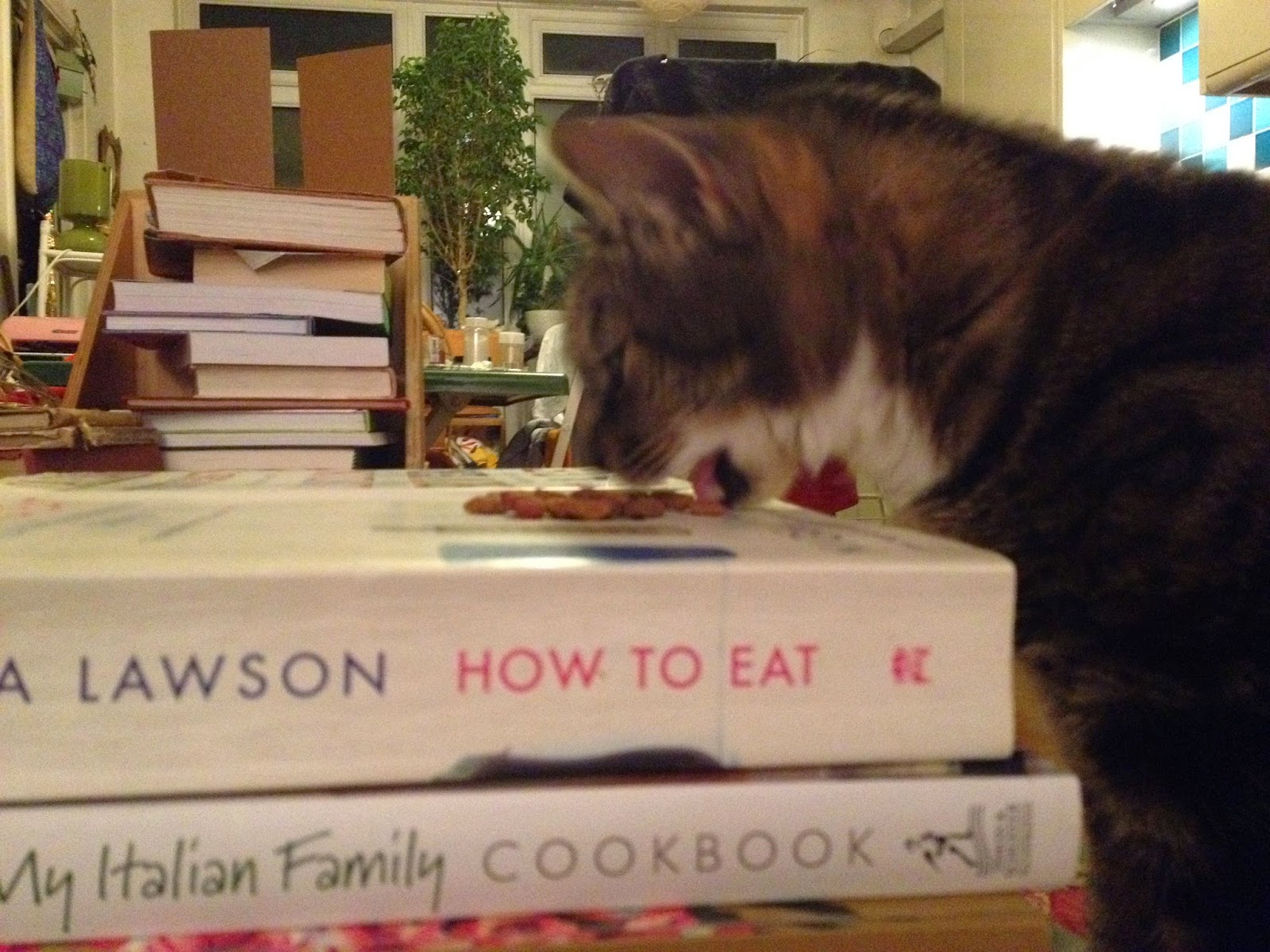 Cassie showing us how to eat, on one of the temporary book piles (the 'to keep' cookery book pile) 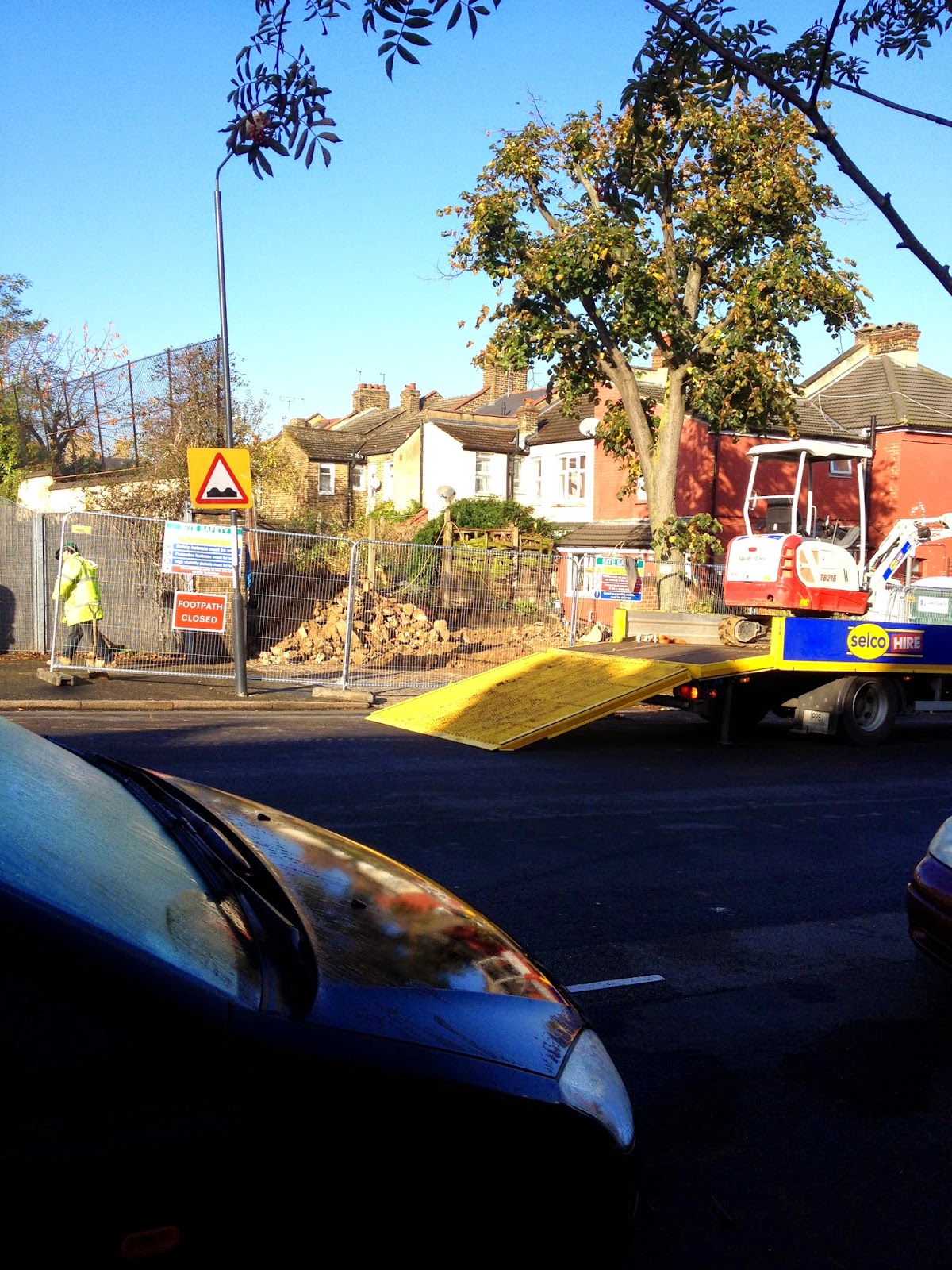 In addition to all the kerfuffle in the house, there has been quite a lot outside. I can't remember if I mentioned this on here before, but my neighbour is having a house built behind our garden where his outhouses were. We have had builders in and out of the house at first, to cut off the electricity to our shed ( they will reinstate it), tell me what would be happening and ask permission to chop a bit of our garden off temporarily. Then they have been out the back with their mini diggers, demolishing then excavating the foundations. I have been keeping the cats in during the day, which they do not like, but I don't want them getting squashed by a digger! 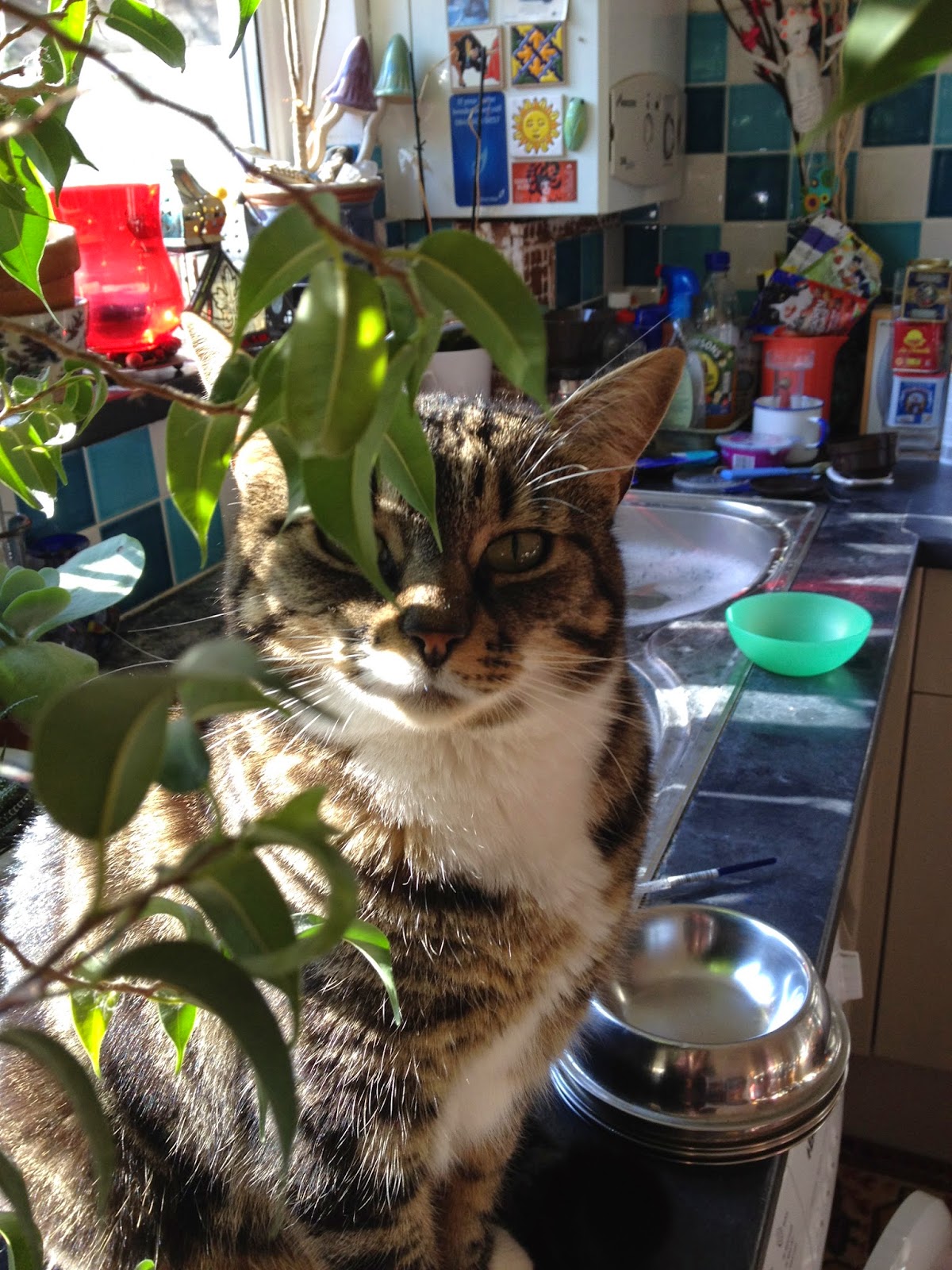 Cassie not liking being kept in. 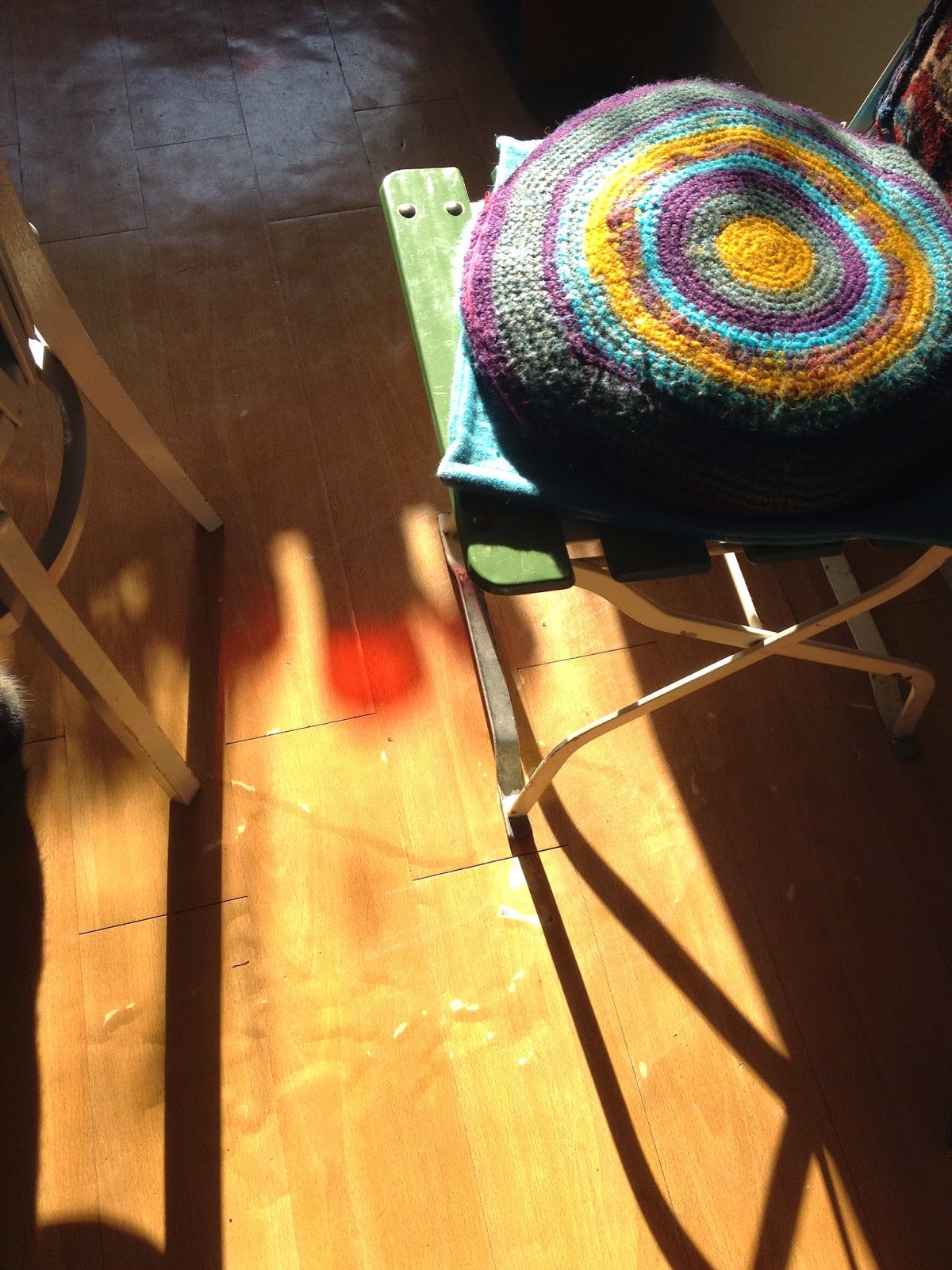 I have not been very well this week, plus we had the delivery of furniture, so I have only gone back to work today. It has been lovely and sunny most days, and the light in the kitchen makes me take photos of random things. The red light is from a candle holder on the newly tidied and de-cobwebbed kitchen windowsill. 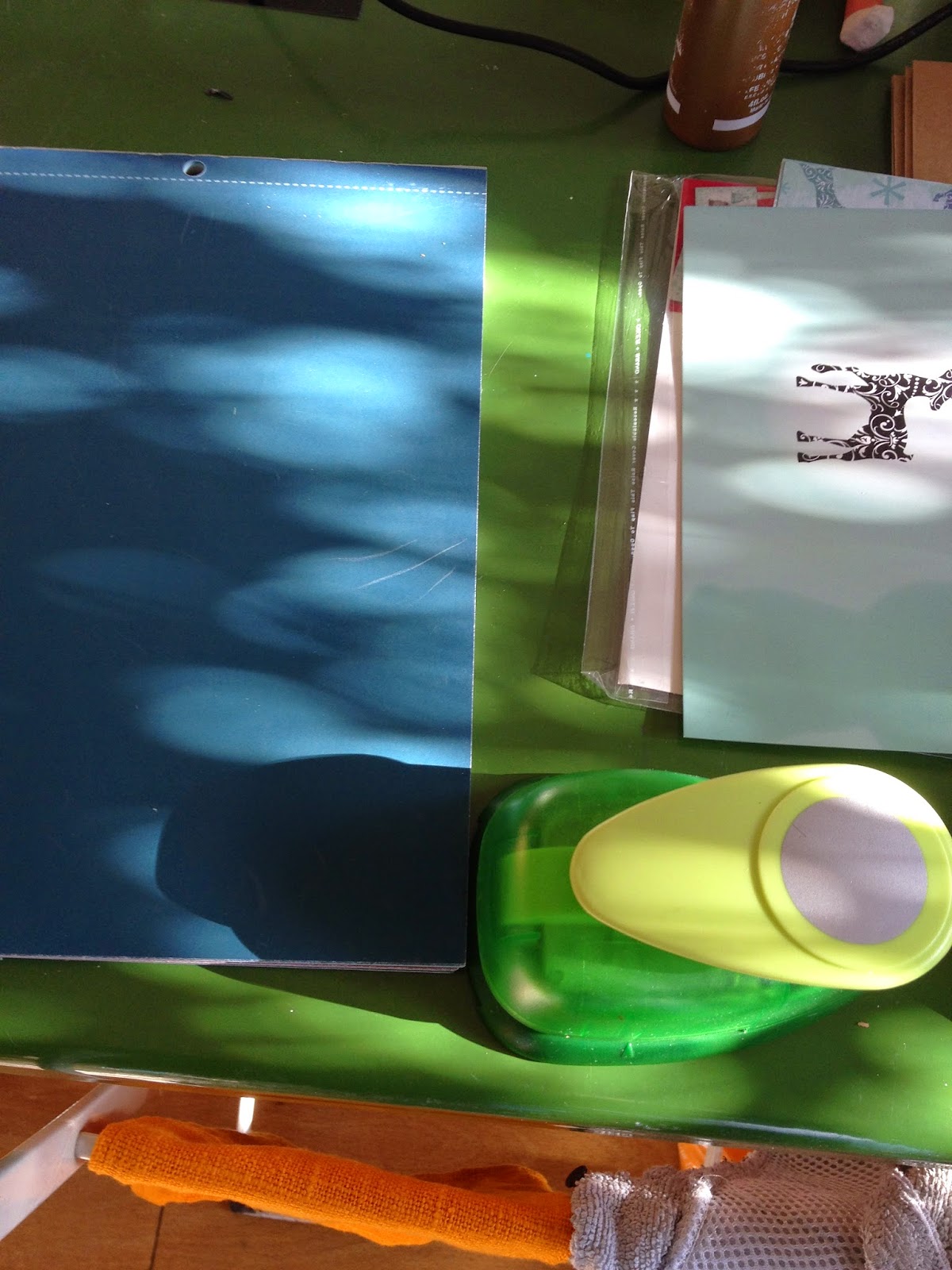 Christmas card stuff on the table. 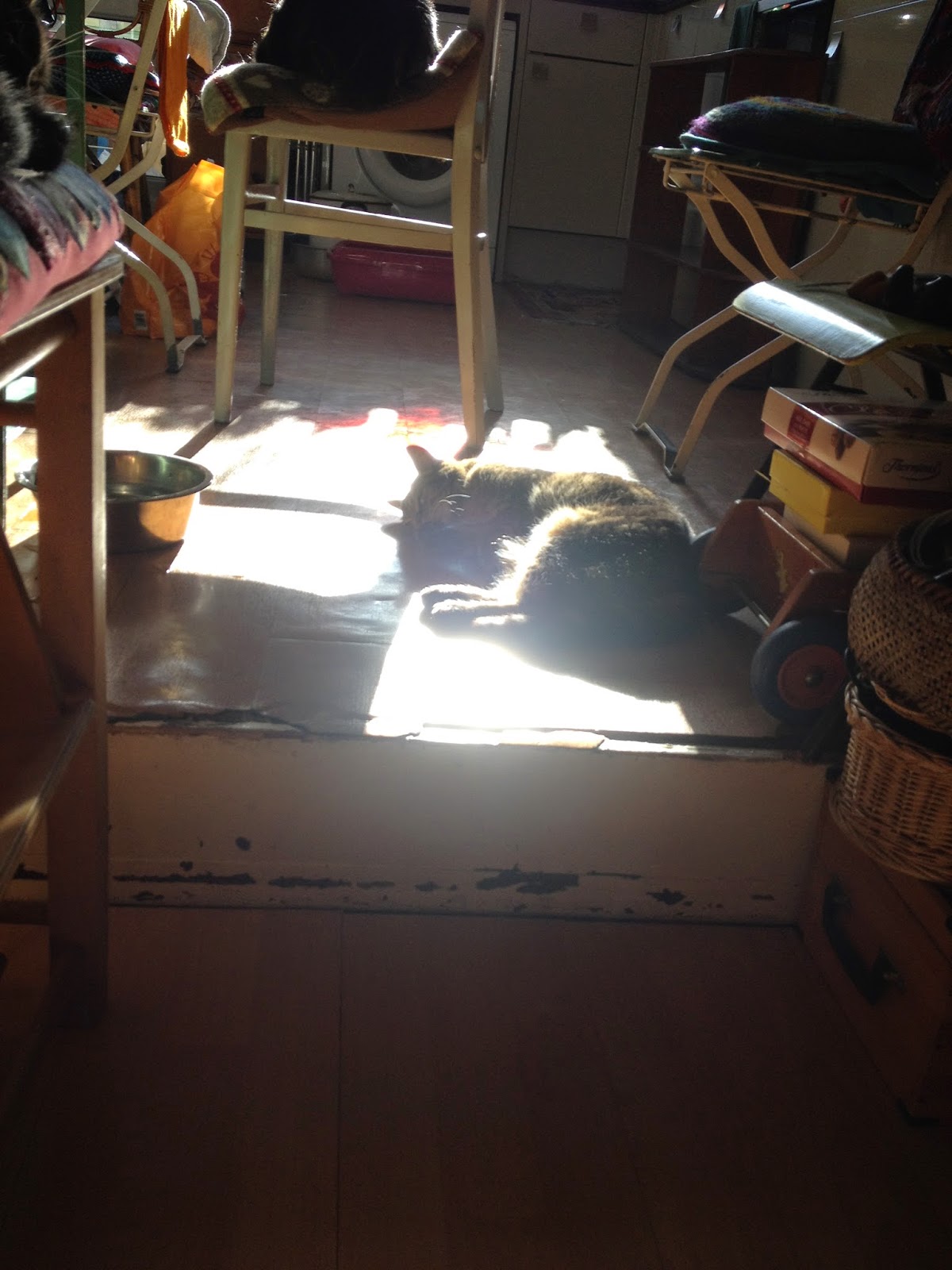 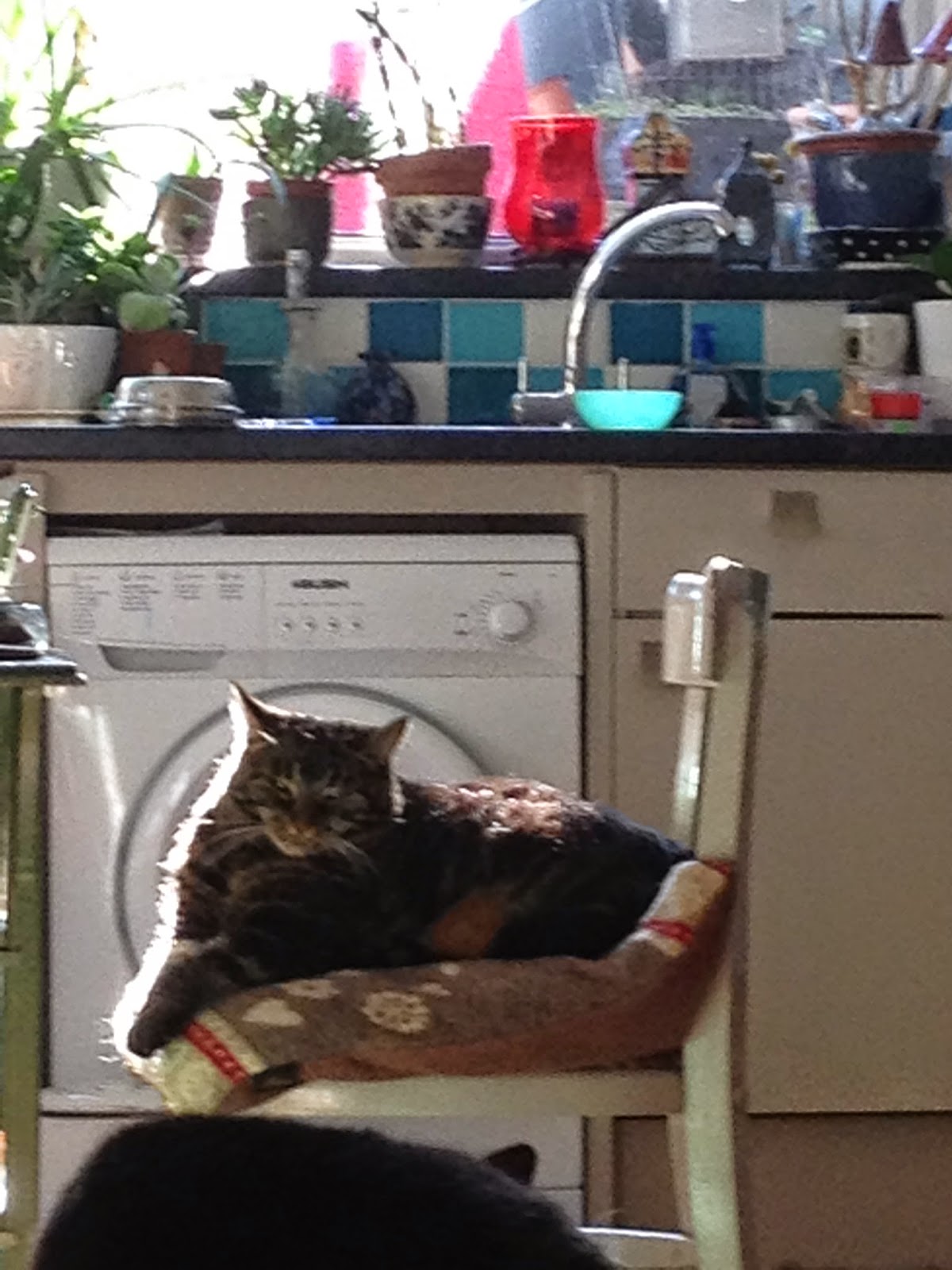 Tiger too. I call her Tigey Toos as she has to have everything that everyone else has got. She is a very jealous cat! 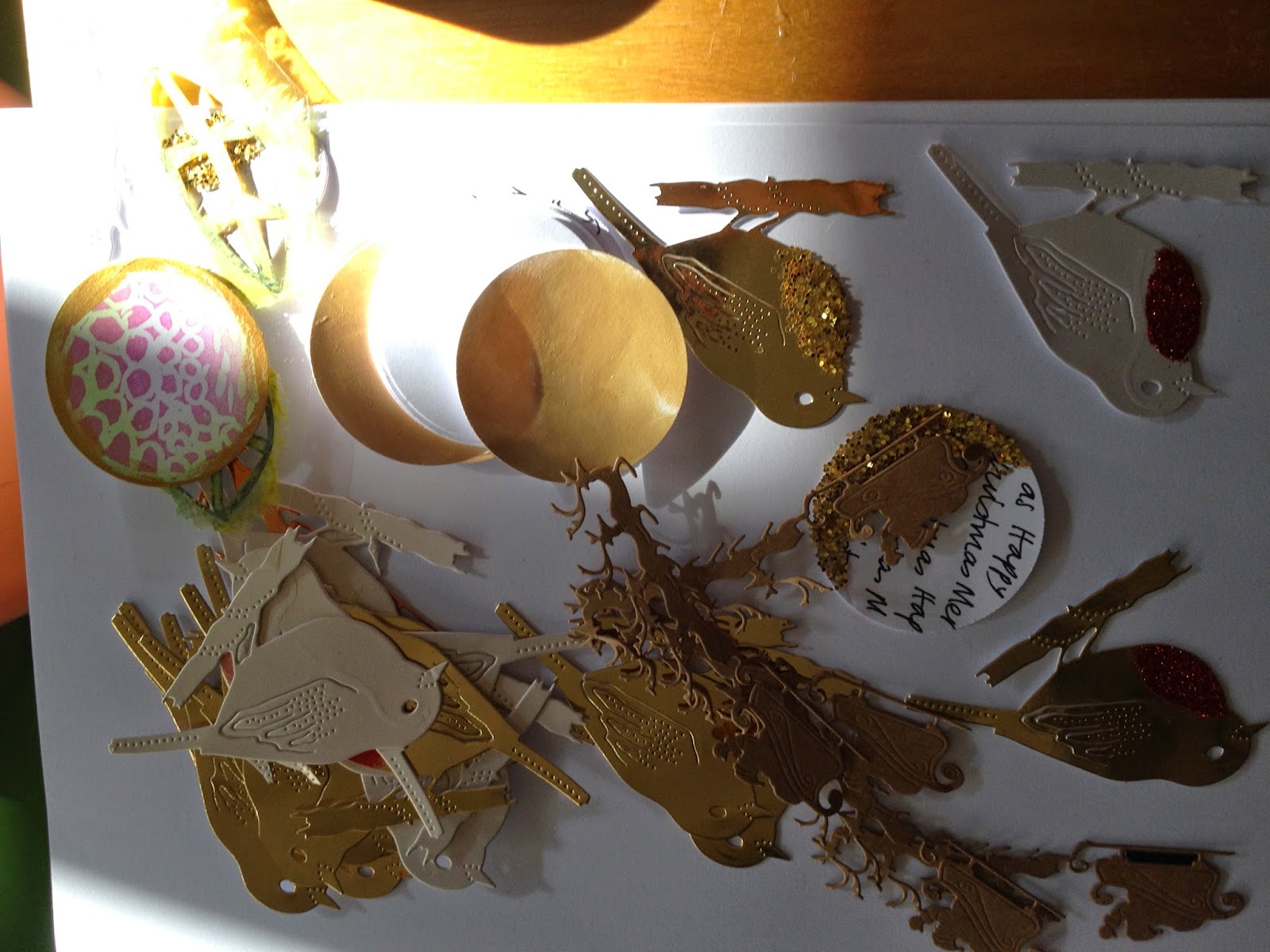 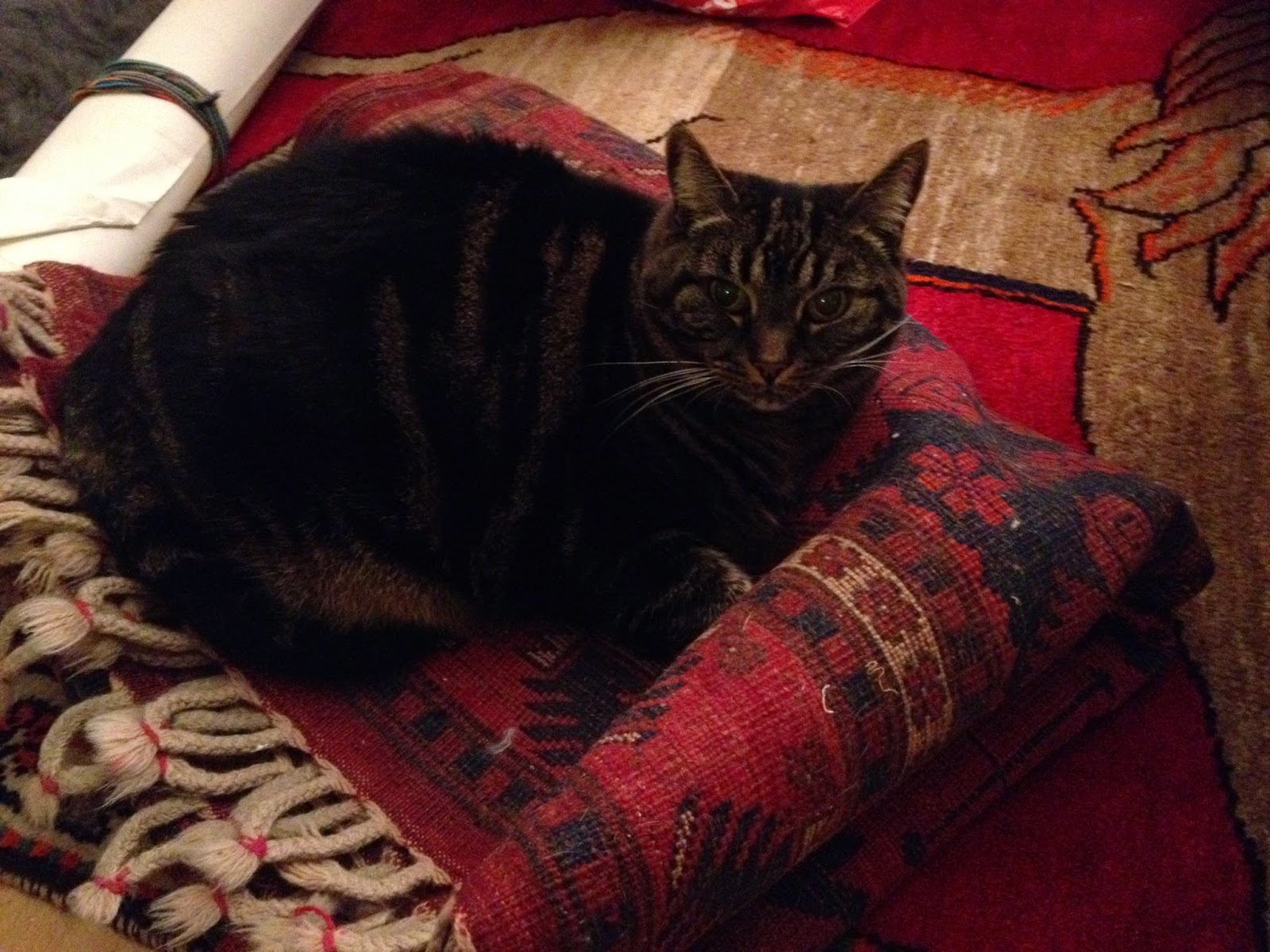 Tiger making the best of a bad situation. (cleaning!) 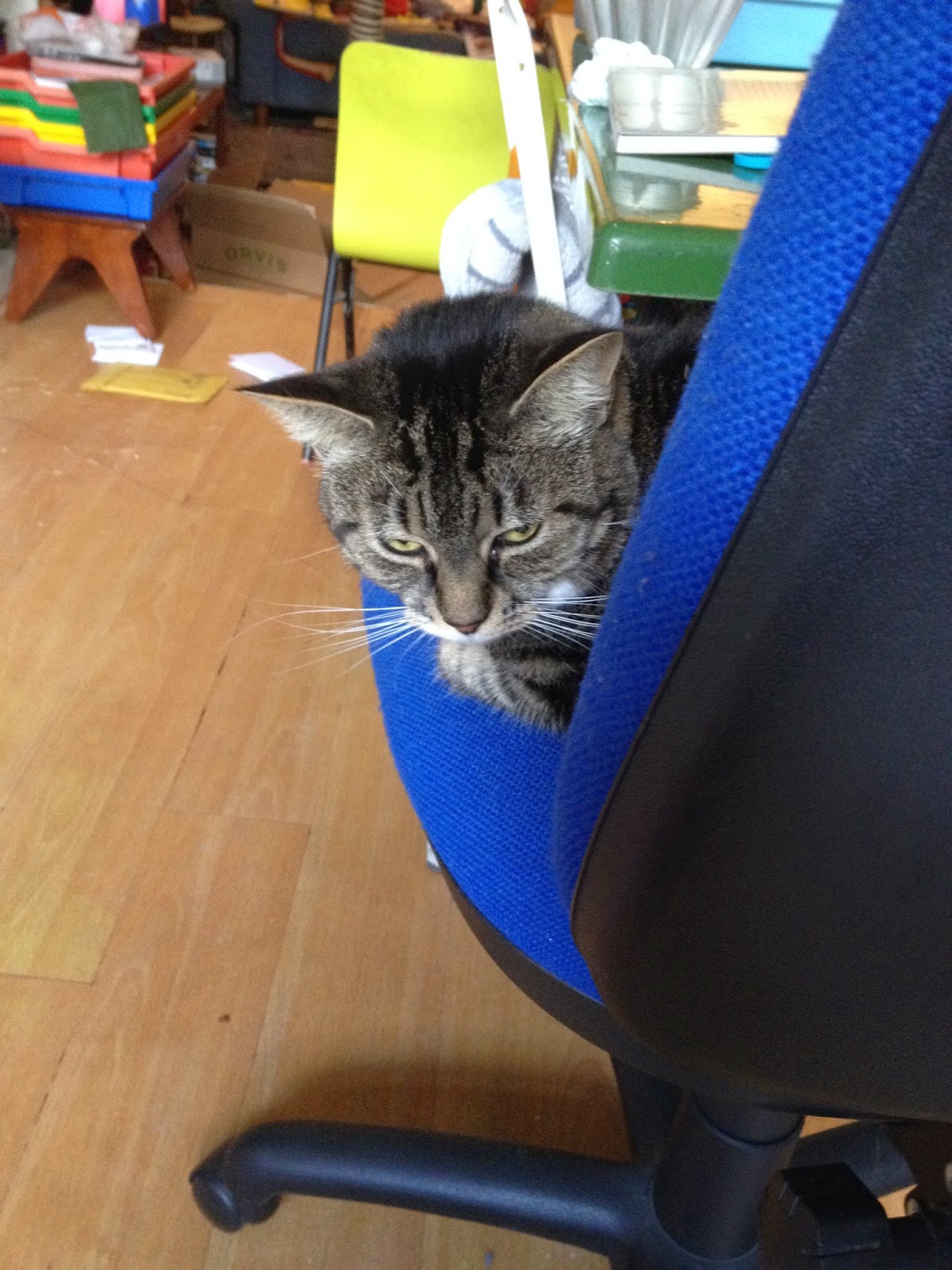 Cassie deciding that we must keep the blue computer chair, it is her favourite, and my idea of getting rid of it is completely misguided. (We are keeping it!) 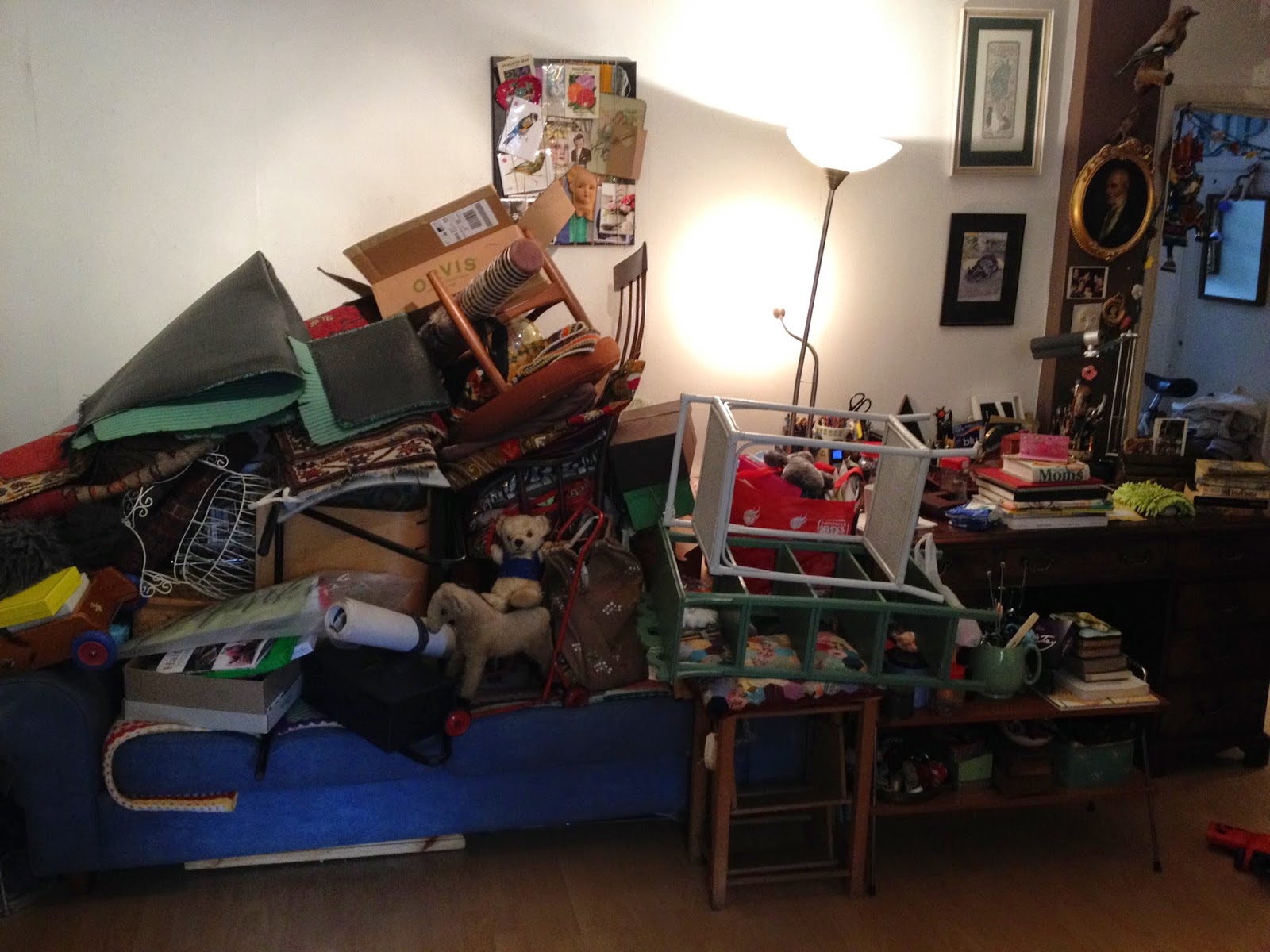 This is the pre-deep cleaning pile. I was nearly at the end of three very hard days sorting out and lugging stuff around, in order to make sense of the new things. I am quite skilled at building what appears to be a teetering pile of stuff on the sofa, (but is actually quite stable) so I can do the floor, and quite enjoy the challenge of seeing how much I can get on there! 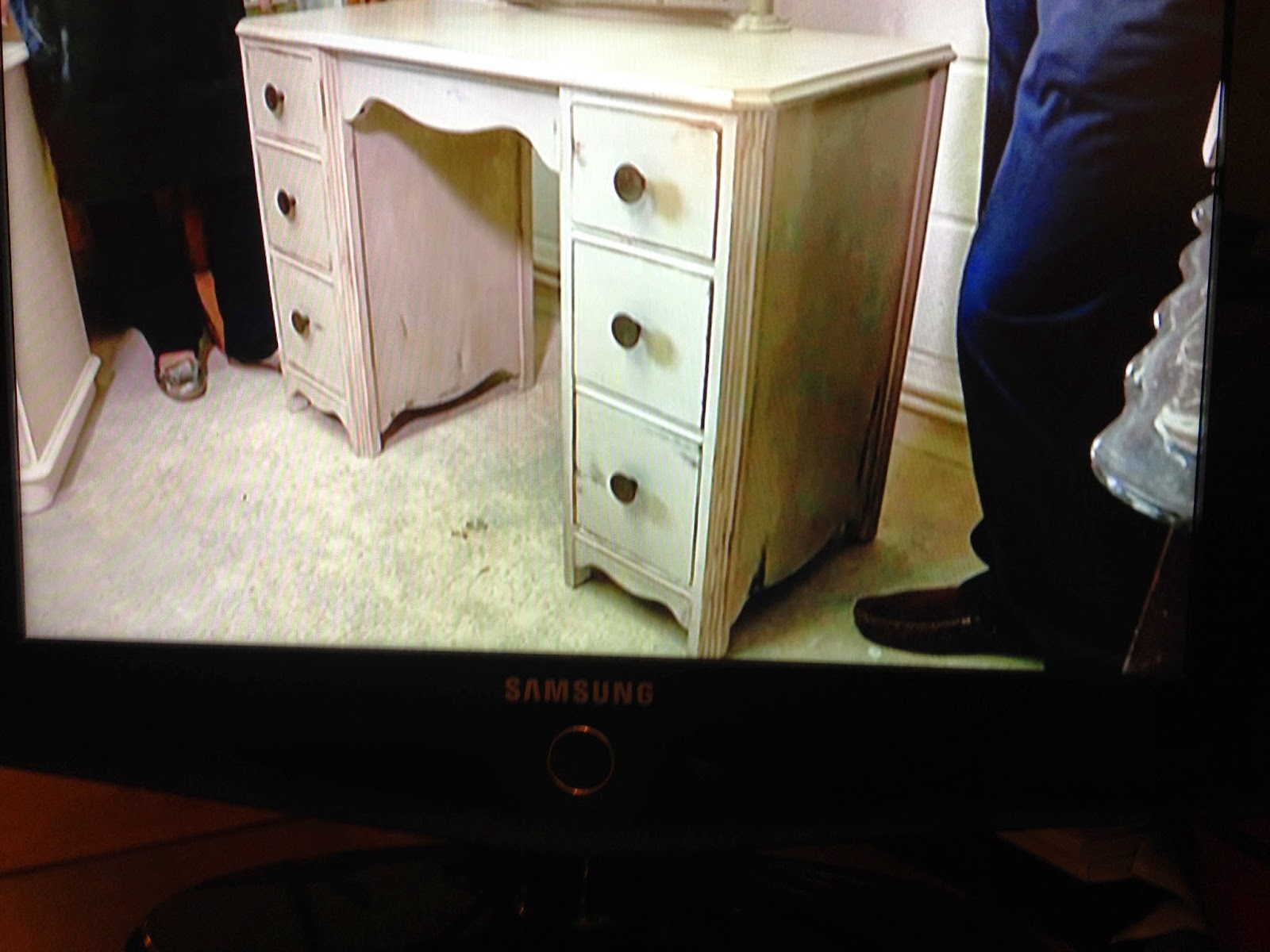 I have watched a fair amount of tv this week-I have three favourite day time programmes, one of which is called 'Put Your Money Where Your Mouth Is'. It is a competition between two antiques dealers who, each day, use their own money to buy things in various places, then sell them to make the most profit (which is then given to charity) This picture is of a dressing table. I have this exact piece of furniture, (mine is not painted) minus the mirror, and always thought is was a small desk (though I can see the holes for the mirror) The dealer sold it for some rip off price. Mine was cheap years ago, I can't remember where from, and was probably one of the first pieces of furniture I bought. I love it and am pleased to have fitted it into the kitchen where the door was. 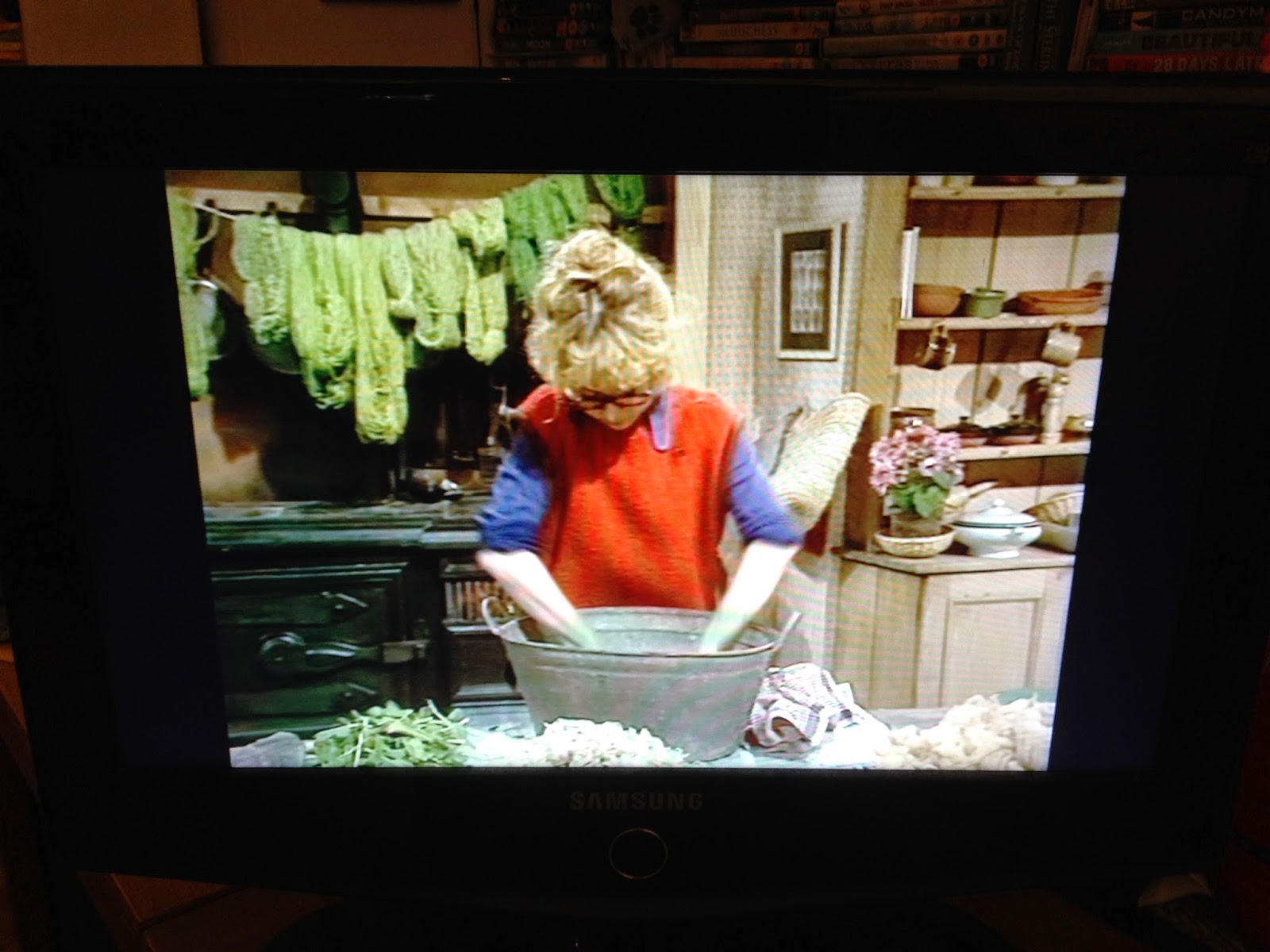 I have also watched most of my box set of 'The Good Life', a comedy from the seventies about a couple who decide to leave the rat race and become self-sufficient, but continue living in Surbiton, next to their snobby but kind neighbours. This is the character Barbara, wearing a re-purposed jumper of her husband's, and dying wool her husband has spun, using nettles he collected on the local golf course. I love the colours in this scene.
Well, that is the exciting summary of some of the things I have been up to. I have also made some extremely large socks, re-siliconed the bath and started reading Mills and Boon books. More on these later!

Gosh you have been busy. I hope you can relax now. Sorry you've not been well.

LOVE ARTY PARTY! love the kitties and love your stuff and mostly love you and Andy. Well done on your skill of putting things where they like to be! I went to s shop in Portland and thought of you...you would have LOVED the little mice in frocks.

Hope you're feeling back to norman! Love all the cat pics, but especially the gorgeous shot of Lily sunbathing! Ross

You never cease to amaze me. You have been busy and those cats! lol, I love seeing them again. Can you believe it, Kittyboy is 15!!! Take care.