I started on Thursday last week, taking time to do things like stick some little game pieces that I liked on the front of a sketchbook, sort things as I went along, that kind of thing. (This kind of activity was a luxury that soon stopped!) So ensued a week of what seemed like utter chaos. In the past, when tackling the back room, which has been a regular occurrence, I would get it all out, then, with ideas that never worked, put most of it back again. Within a few weeks, it would be the same mess it always was, and I would give up, using it as a dumping ground for things I didn't want to deal with, or had no other room for. This time I had a plan, in fact a vision. (Sounds pretentious but it was what kept me going.) I wanted a room where:
I could read a book or do some craft,
I knew where everything was,
The cats could sit,
The radiator was usable,
That wasn't embarrassing. 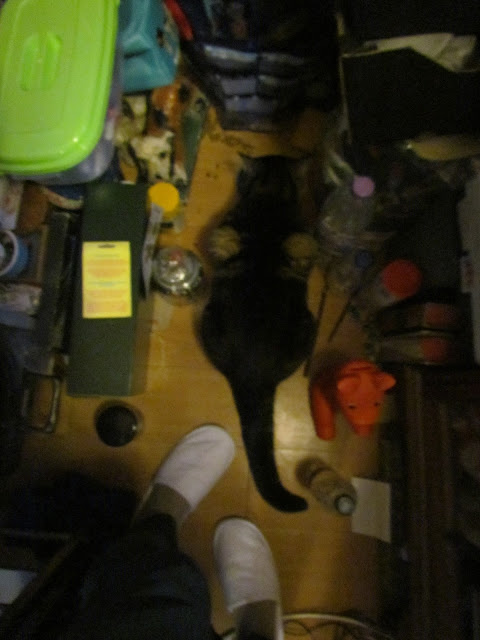 Cassie was there every step of the way. Lily hates this kind of thing, it disturbs her, and she is wise enough to just hide in the bedroom and sleep, only getting up for food or the toilet!
Cassie, on the other hand, thrives on the excitement and unpredictability of change. She did have one evening of seeming to have had just about enough, as her food wasn't accessible for about half an hour. The above photo shows just how much space she had. This room was her little room when we first got her, as we wanted to separate her from Tiger and Lily for a couple of days. Ever since then, she has seen it as hers, and has expected biscuits to be available at all times in there. 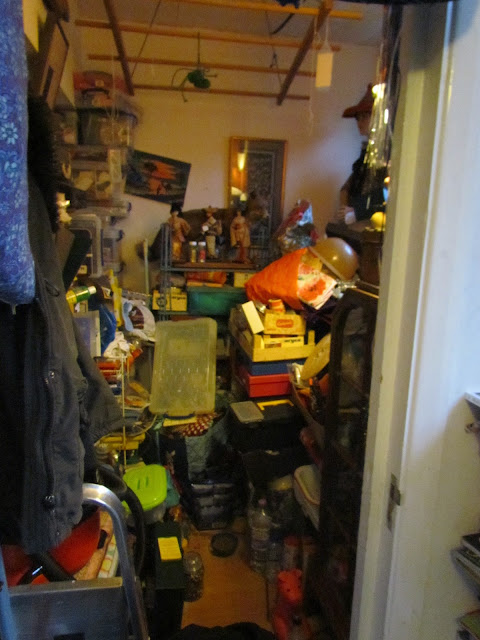 The piles were to the ceiling in some places, and nearly in others. 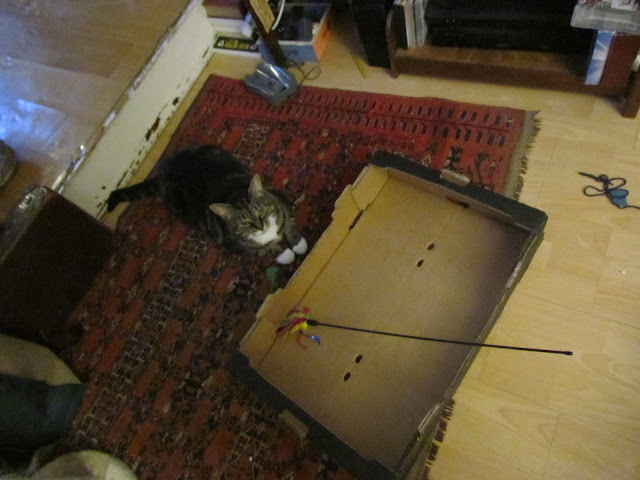 It all started with a box, well about ten boxes. Thank you Sainsbury's! These were to put stuff to sell into temporarily. They are great as they stack. Cassie loves to play in these boxes, catching her feather through the holes. Here she is waiting for this to happen. 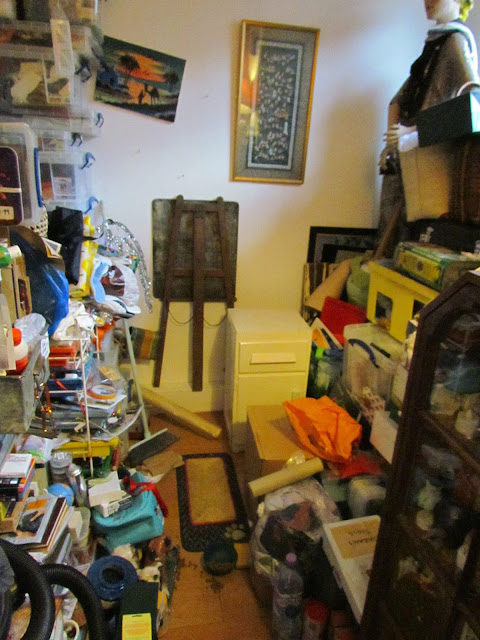 I cleared up the middle first. I wanted to get to a little wooden bedside cupboard which I am converting into an oven for role play at work. I painted the black base on the Thursday, but have only just begun the next stage today. I will finish it next week. I didn't have any more time for that kind of thing after Thursday. 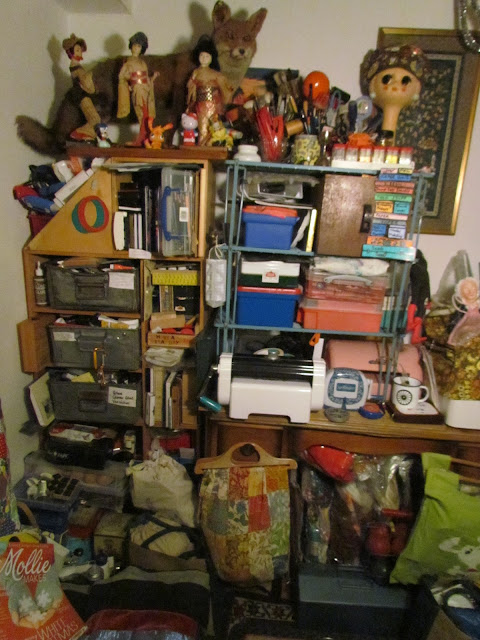 The same view more or less finished. Still quite full, but I pretty much know what is there now. Under the desk is fabric in shrink bags. (These bags are my favourite thing at the moment-brilliant for wool and fabric storage, and recently expanded into bedding storage.) The pound shop do them. 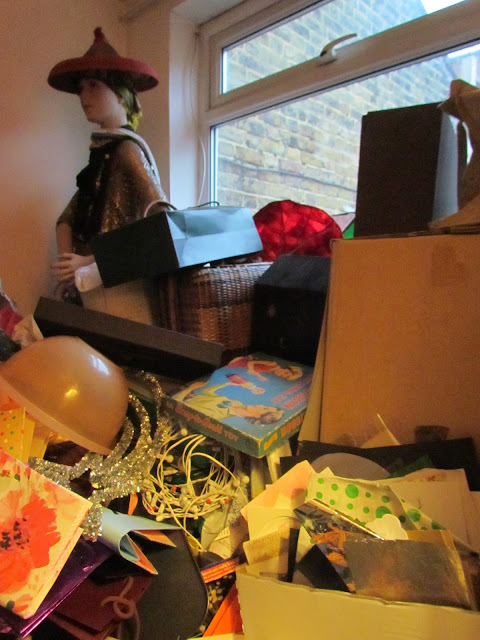 This is the corner of the room. This side was the worst. The other side had a little usable and organised space. My art stuff was on the wooden shelves and they were fairly organised. This side was just a heap of stuff I couldn't even remember. 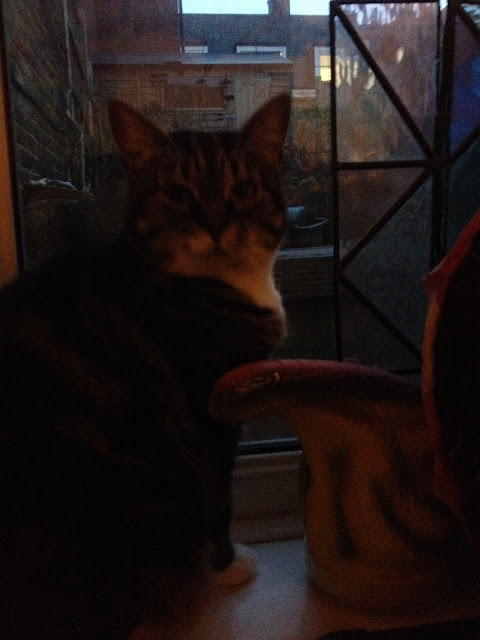 Cassie was very excited when the window was exposed! 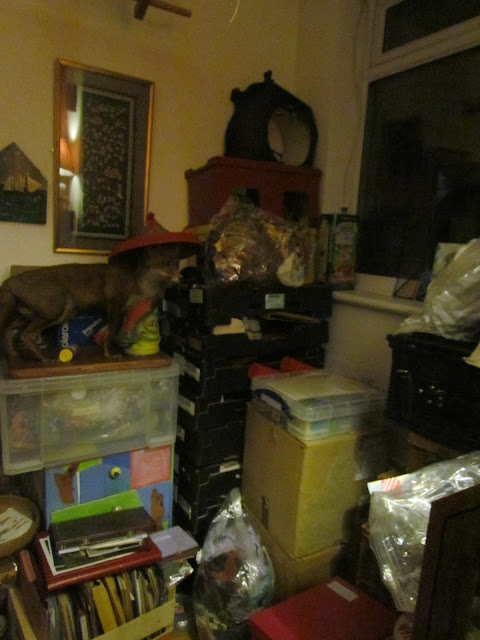 My cardboard boxes are in the corner here. I had to tackle the other side of the room before moving them. A lot of this week has been emptying and refilling boxes in more efficient ways. I have not had to buy any storage stuff, just use the things I have better. The stuff to sell is in the shed now, in plastic boxes which I will do over the next couple of weeks. I have two boxes in the sitting room that I will do next week. 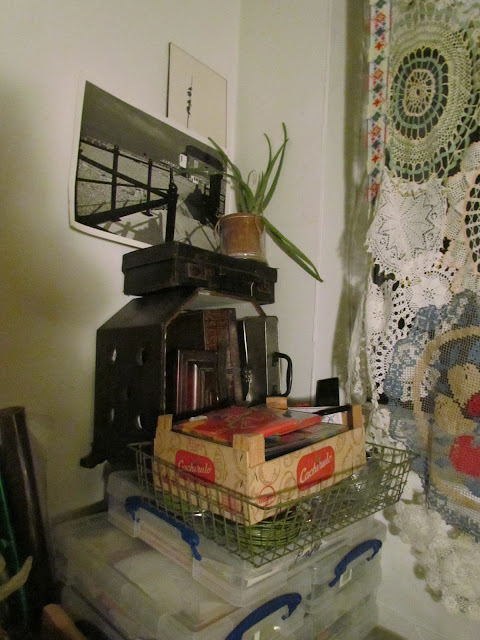 This is the corner of the room now. There is still a pile of plastic boxes, but only a single layer, not reaching to the ceiling, and I know what is in them. I have tried to put what I use most near the top, and must make the effort to put away things when I have finished with them. I also must not buy any more art and craft supplies-probably ever! 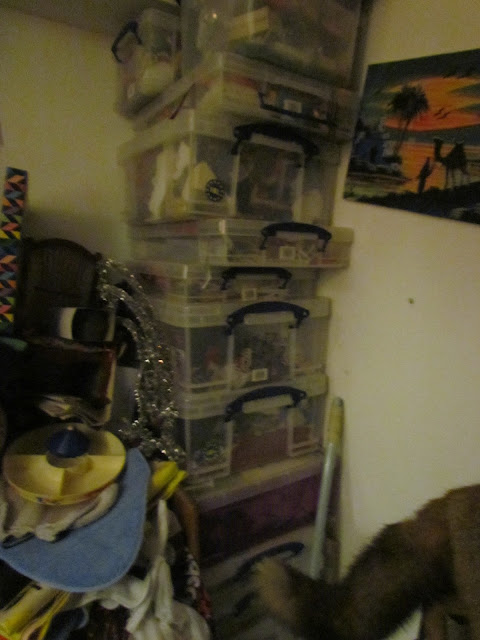 This pile was almost fun to excavate. There was artwork, materials, and fabric, lots of fabric. I probably halved my fabric and I still have a lot. I think I have had about five trips to the charity shop, maybe six, and each time with at least four bags. I have all the stuff for school in my car ready to take in next week. I can't believe how much I have accumulated. I somehow found it easy to get rid of things this time, whereas before I always found it so hard. I think it is because I really wanted my vision to come true. As the week went on, I got quicker and harsher in the decisions I made as I just wanted it to be over. Finally, today, I think that will do for now. I did sit in there and read a little when having my tea this morning. Woohoo! 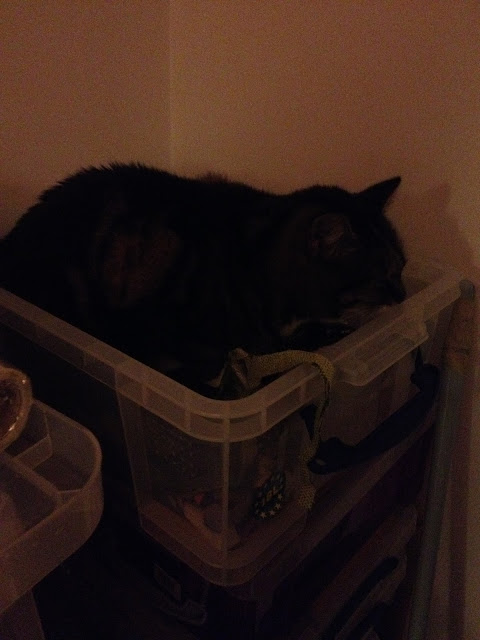 Cassie helping to sort the fabric by sitting on it. 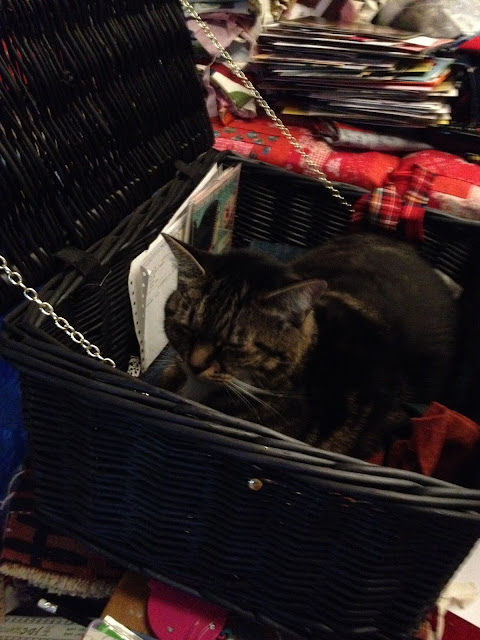 Cassie in the card box, helping to sort the cards by sitting on them. 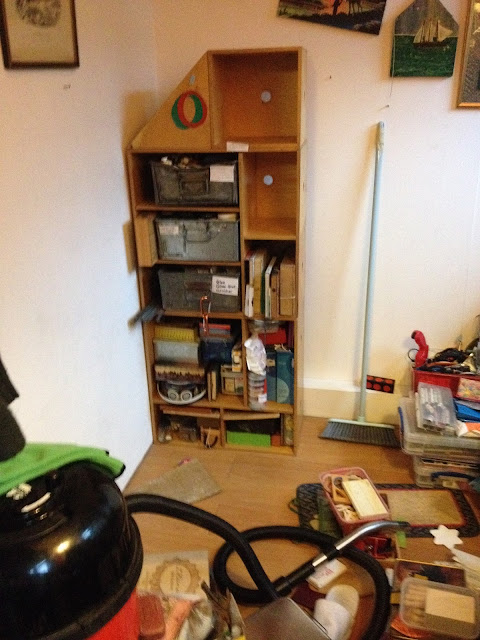 I think this was Saturday. I felt very excited to be able to see the floor and put something where it was going to go.  Meanwhile, the rest of the flat looked like this. 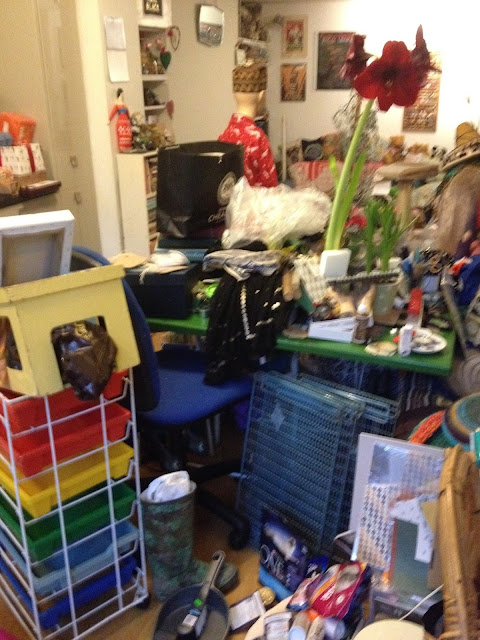 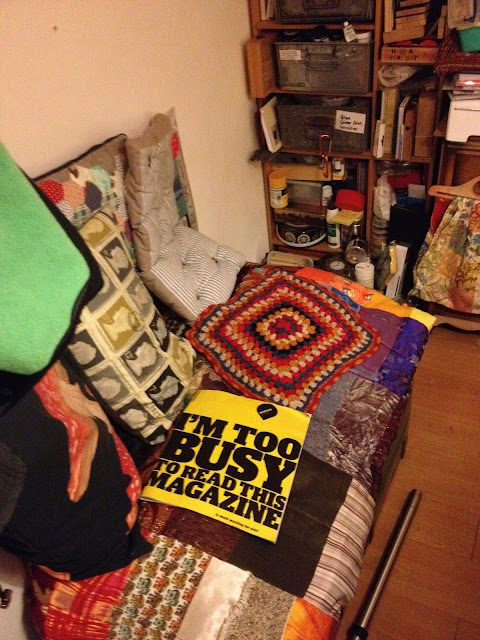 The trunks from the kitchen have become my seat. That meant that I could move my wool storage bins to where the trunks were, disguise them with a blanket, and make a cosy seat for the cats. 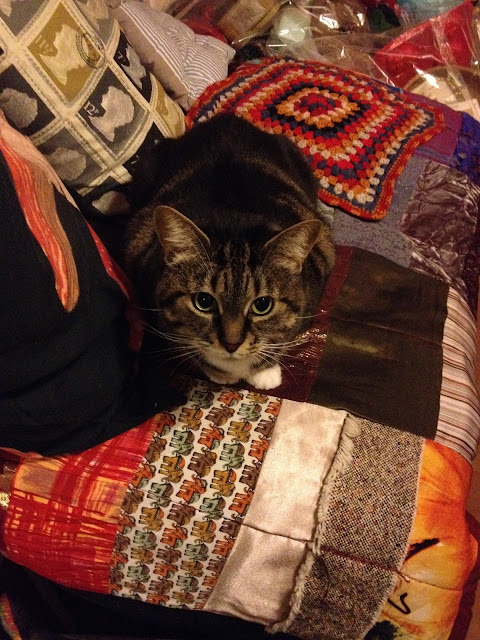 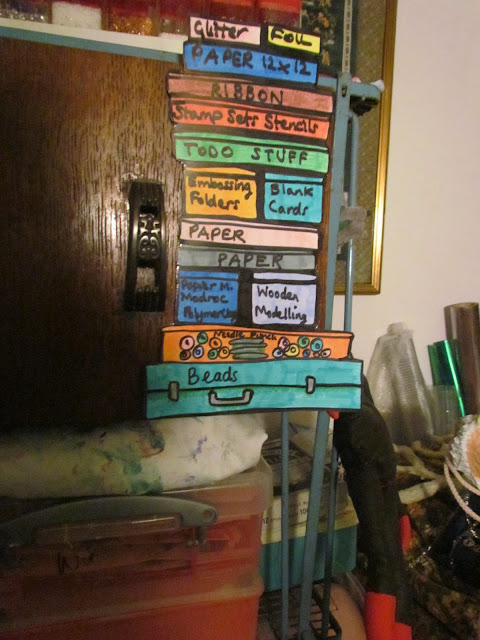 A bit of relaxing colouring to make this reminder of what is in the boxes. 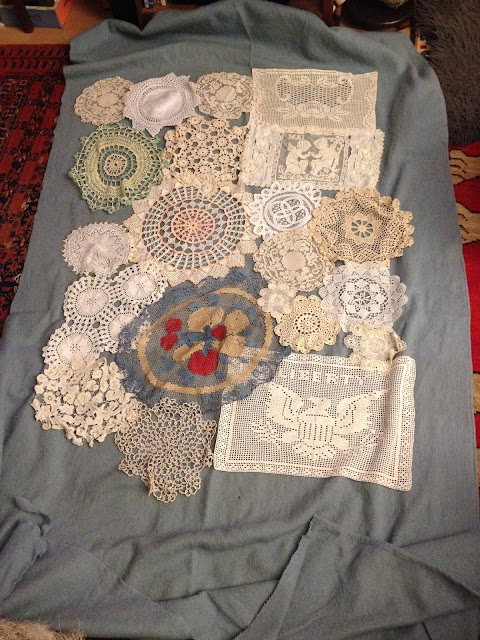 I found lots of great things I had forgotten I had, or knew I had but couldn't find. These doilies, from various sources, are one such thing. I have a book by Elisabeth Dunker of Fine Little Day. I always used to enjoy reading her blog and when I saw the book a while ago I had to get it. It is filled with lovely ideas and pictures, amongst which is a curtain made with vintage doilies. Making this was my reward for all the hard work. It still needs sewing up a little better, and hanging more neatly, but I like it. It made me spend a lot of time looking closely at the doilies as I sewed them and they are so fine. I can't imagine being able to do such tiny crochet. Some of them are other techniques and all are beautiful. 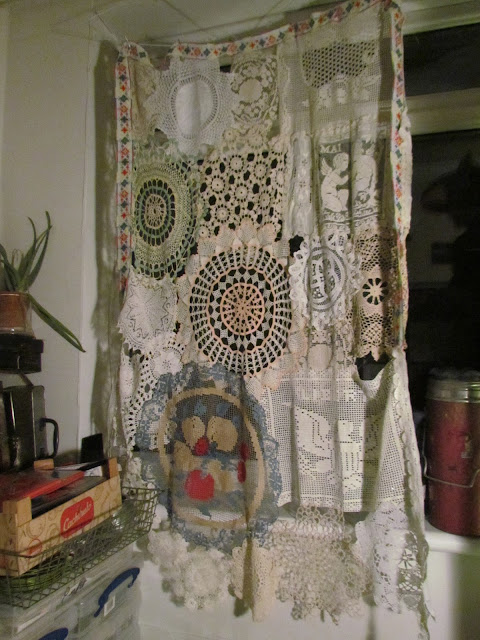 My other treat was being able to incorporate my model head into things. I was thinking of selling her but didn't want to. She fits nicely onto the top of these shelves (1960s folding camping shelves-one of the most useful and strong things I have ever bought!) and looks good in the Russian hat. I was thinking of getting rid of my big mannequin, and wondered about detaching her head and just keeping that. However, she is all in one piece, and I am not sawing a mannequin head off in the garden, so she is staying too. She is in the corner on the right. 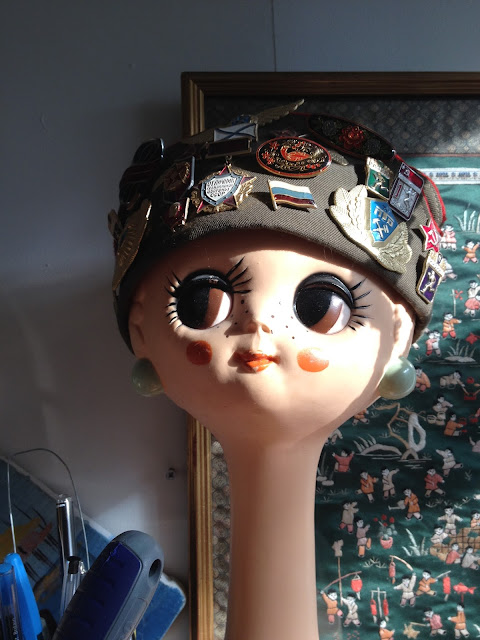 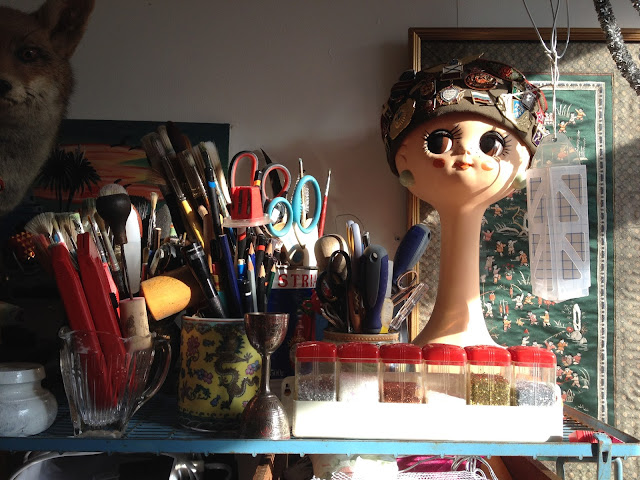 I was also pleased to be able to fit the red lidded spice rack from the 50s or 60s, which makes a lovely container for glitter. 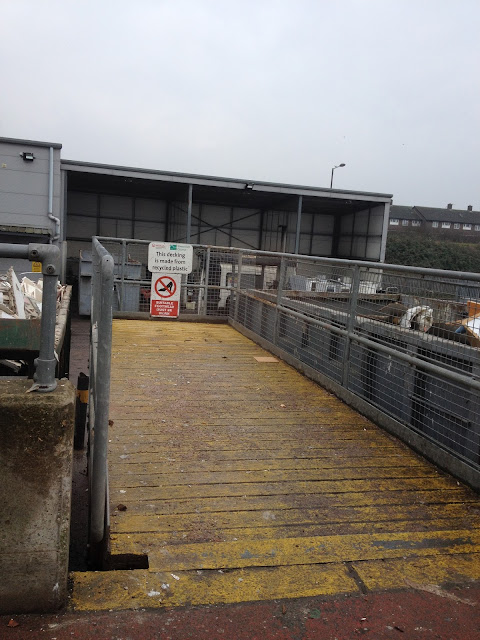 I only went to the tip once, and that was to recycle the cardboard boxes. I like the sign advising that suitable footwear should be worn. Not a sign aimed at men obviously.
Finally, a picture of the kitchen table, looking like I think tables should look. I love putting flowers on the table as it takes me straight back to childhood and my Wendy house. Andy gave me the roses on Valentines day, and the daffodils I bought. I was going to sell the spotty teapot, but I love it and it makes a great vase! I found the tablecloth in a case I had forgotten. 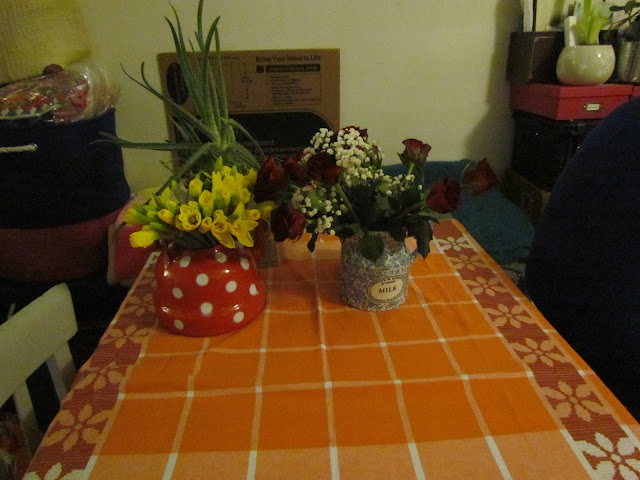 I am trying to break with some of my patterns of behaviour. Such as, having too many things. I watch the hoarding programmes without really wanting to admit that I have similar attitudes. Since my part time working started after Christmas, I have been trying to tackle a bit of the flat each week, and have already got rid of and sorted a lot. As it is half term next week, I have decided to tackle the back room. Although the rest of the flat is very full, we are not living under teetering piles of rubbish and in danger of being crushed. However, the back room is a mini version of that. It is a very small room, about 2.5 meters square. The only usable space is about a meter strip in the middle for Cassie's biscuits. By the end of next week, I want it to be a place that can be sat in, and even slept in by a guest. I might be a bit ambitious, and I do always overestimate what I can get done in any given time, but I hope to get a lot done. Will share before and after if I get it finished! 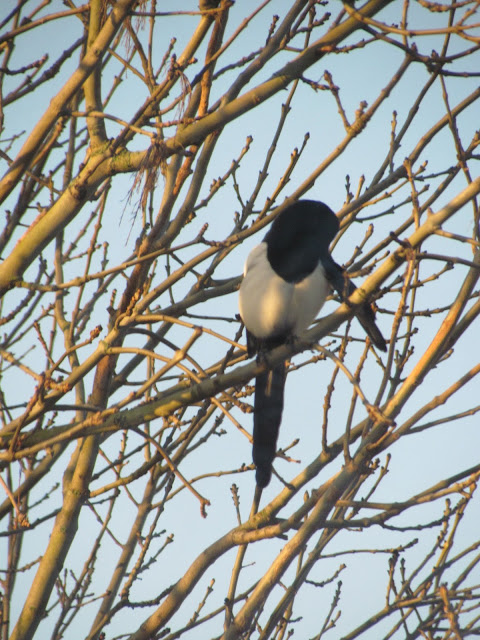 The weekend before last, we went to a place called Brighouse, in Yorkshire, for a surprise 50th birthday party for Andy's cousin Pete. There were lots of patterns to be seen from the window of our hotel on the lovely morning after, when I had a less than lovely morning after the fun night before. Don't sit up drinking Drambui in the hotel bar would be my advice. Despite the hangover, it was a fun party and good to see everyone. 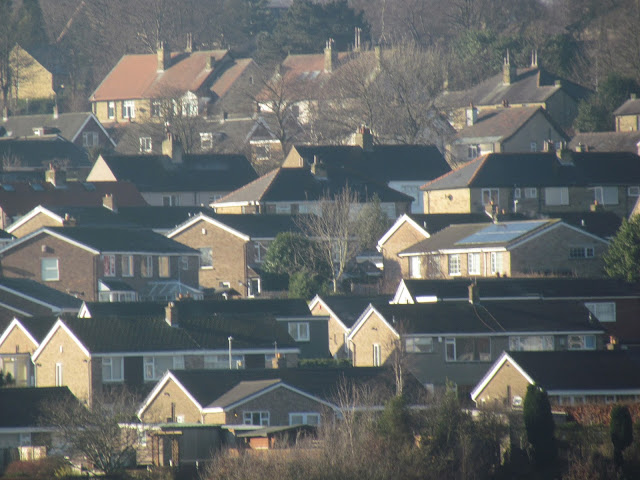 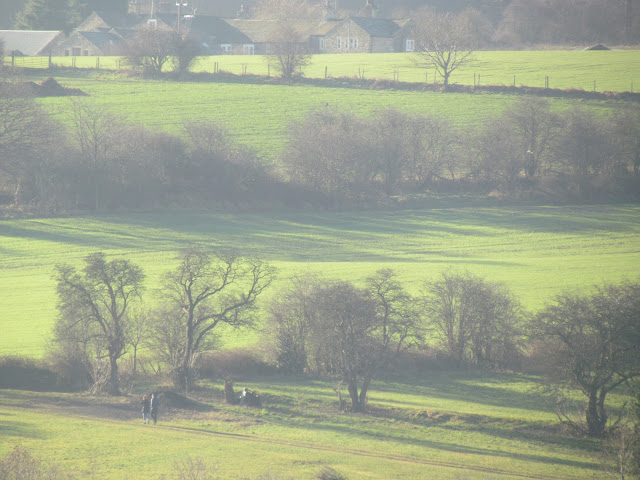 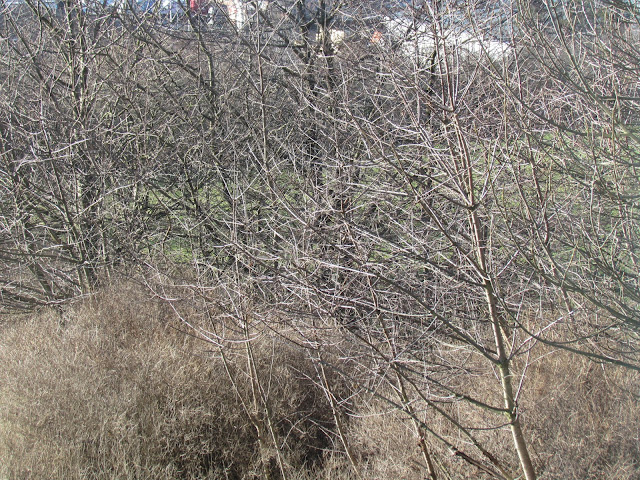 The other patterns in my life at the moment are knitting ones. I had a bit of an animal phase after Christmas, making a turkey, goose and rooster. I love making them! Don't seem to have taken many photos though. I am currently knitting my first ever jumper. It is from a book of cat patterns-mainly jumpers, and some other bits like cushions. It is from the eighties and is great. I spotted it when I was donating stuff. At least I went in with a big bag and came out with a small one! I have only done the rib, the bottom and the beginning of the pattern. I painstakingly copied out the pattern onto graph paper rather than following the one in the book, which may have been a waste of time but enjoyable. It will use up a lot of my wool, though may be a bit cobbled together in different colours and types. I may only end up wearing it around the house, but I am excited to get on with it! I do have a very boring crocheted baby blanket to make but am doing that in between. 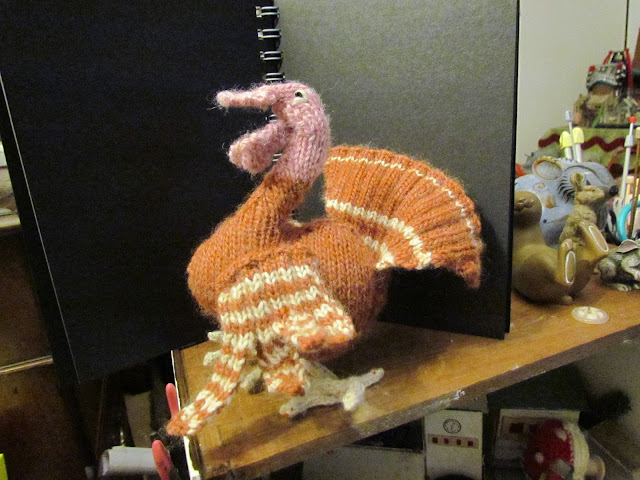 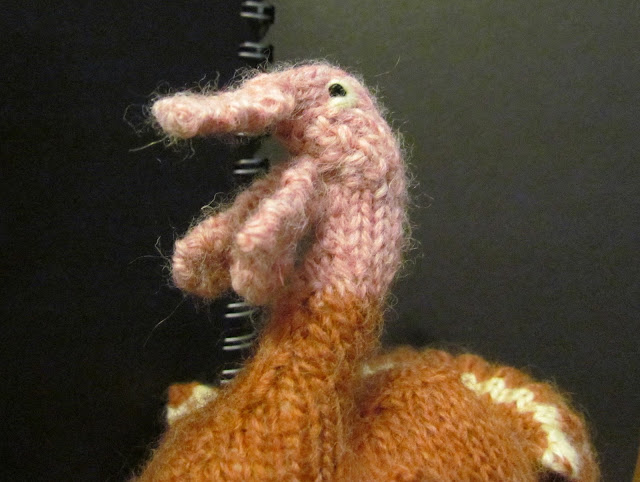 Here's the goose  and the rooster on tumblr.
Posted by Sarah at 12:30 4 comments: 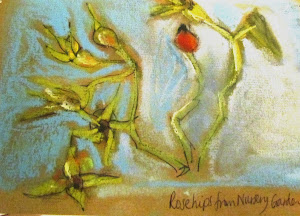