I found a book of knitted teddy bears in the charity shop the other day, and have been knitting little bears ever since. (Well I am on my third one anyway) I have made two of the same bear and am now trying a second pattern. I am quite pleased that I am managing to follow a knitting pattern, as I never could before. Since teaching myself the double pointed needles my knitting confidence has increased. 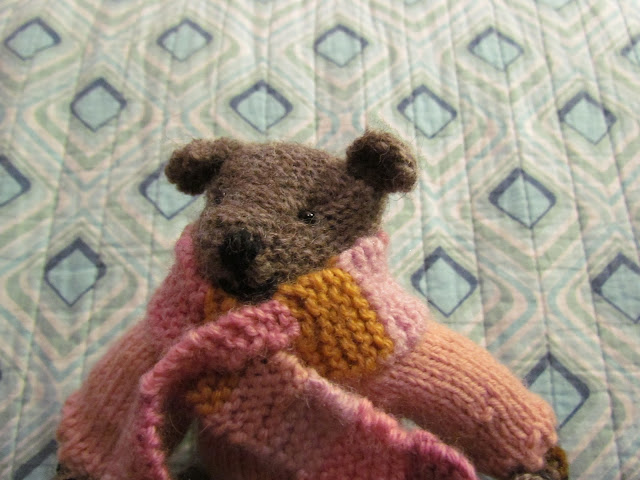 This is bear number one, or 'proto bear' who I made all my mistakes on-mainly by sewing the wrong sides of the legs together instead of the right sides. Unlike crochet animals I have made, the bears are not made in the round, but as pieces to make up, like you would fabric. This one is done in stocking stitch, but the bumpy side is the right side and I got confused. I knitted two more legs and tried again! The jumper is much harder to make than the bear. 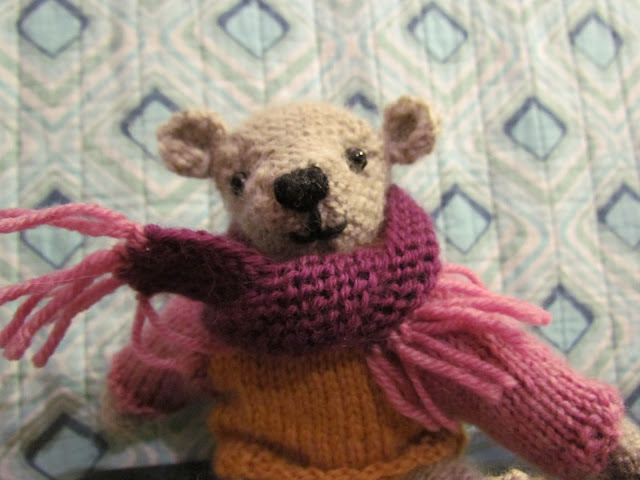 This is bear two, who now lives with Linda Sue in her mouse flat in West London. I used the larger of my glass beads for this one's eyes. I also did a different colour for the jumper sleeves, as in the first one I think I used the front as a sleeve-the arms are significantly different in width! 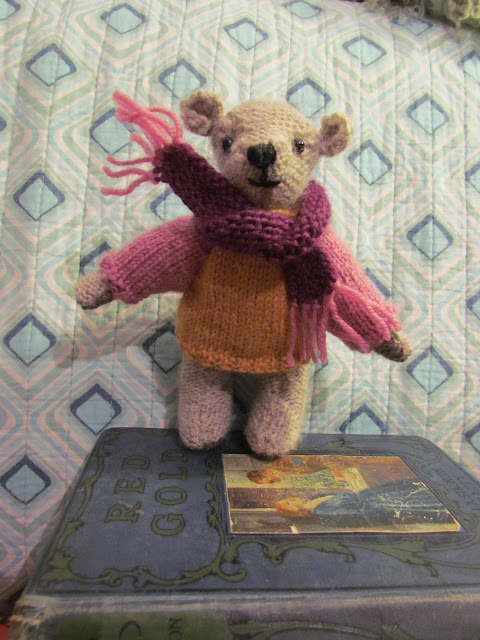 The bear is posing on a book bought purely for the cover. I have quite a collection of books bought for the cover. Oh dear. These books were £1 each in the cheapest second hand bookshop in the world-in Greenwich. If you are willing to put up with piles of books that you search through, and piles of book collectors who don't really like to move out of the way in the narrow aisles then it is for you. I just remembered somewhere cheaper-a place in Barnet where we went with Andy's sister was giving away books free. I seem to remember I was quite restrained. 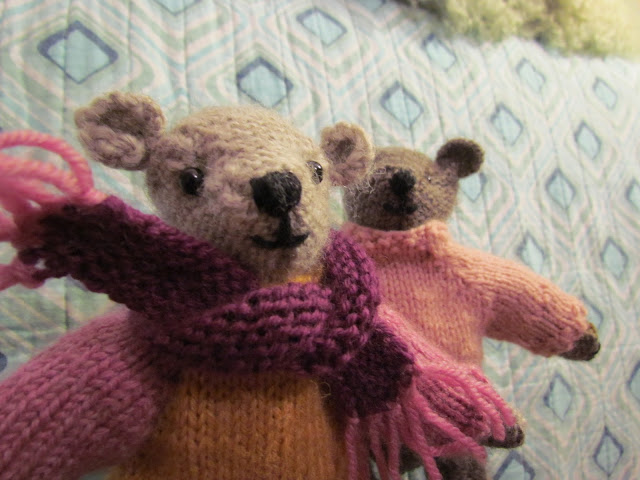 Apart from the happy bear faces, I thought I would share a couple of things from school recently. 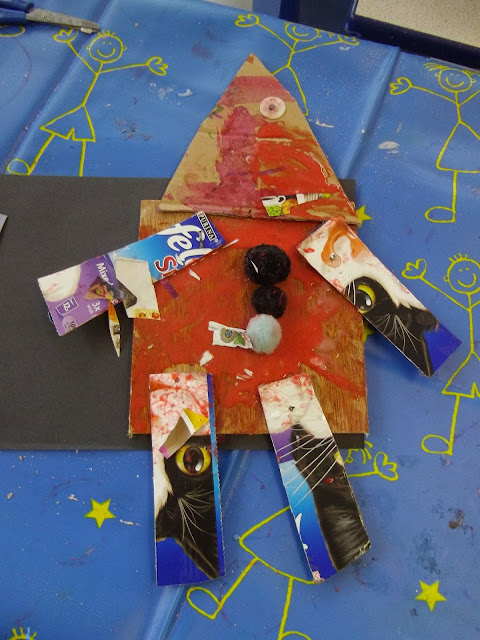 This is a robot made by one of the boys in our morning nursery. He was hammering nails into a piece of wood outside.(He is good at hammering and was able to make the nail stick into the wood) I asked what he was making and he said "A robot." I thought I would help him, so went to cut some arms and legs. He was able to fix them onto the wood, which I then finished off by hammering the ends over. He wanted a triangle head. Then he went inside to paint and decorate the robot. He added buttons, drew a face and stuck on an eye. My favourite part is the one eye! I had to do some minor surgery on the robot tonight as the arms and legs had stuck and stopped moving. They move again now! 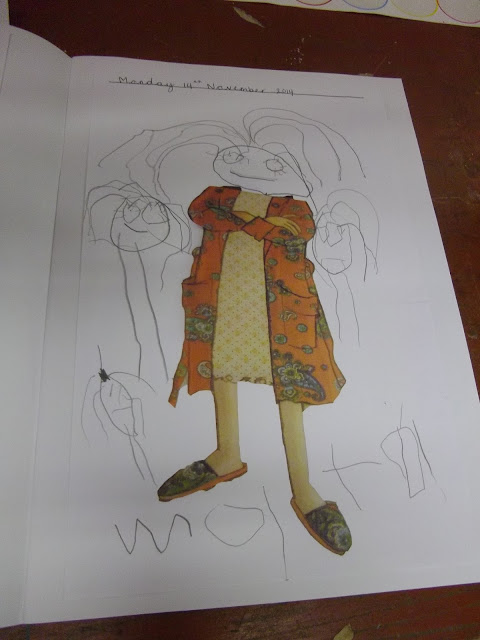 This is our adult led task this week. It is the mum from our story "Biscuit Bear". You never see her face in the book, so we talked about her and how she might be feeling. We looked at the clues-a big mess on the kitchen floor, the folded arms. We practised different expressions and talked about feelings that we have. Then they have to draw Mum's head and show her feelings in their drawing. We ask them why she feels a particular way. It has been a fun activity and the talking/drawing have been impressive. This is my favourite so far. This girl drew Mum's face and could say how she was feeling, also adding her own family, and describing their feelings too. I love the hair and eyes on her faces! 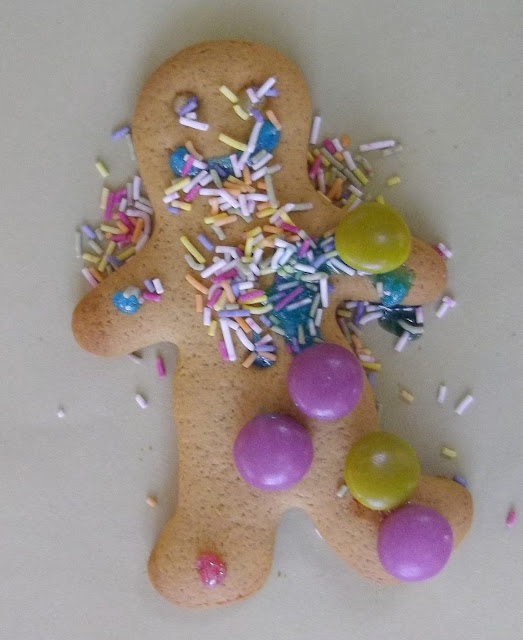 The final happy face is the gingerbread man. He probably won't be happy for long. Last week, one of our parents brought her little girl a gingerbread man at home time in the morning. My colleague jokingly asked where hers was. The Mum then generously went and bought enough gingerbread men decorating kits for the whole class, morning and afternoon, to make their own. I took photos for their books, as, obviously, they were soon to meet their fate.
Posted by Sarah at 12:53 3 comments: