I saw this little star tree in a charity shop and had to have it. I think it was 50p-a price I have been paying for bargains since the '80s. I remember items that cost me 50p over the years-a purple jumper from Leicester market, a pair of crystal earrings from a junk shop in Maidstone, a 50s rose coloured dress also from Leicester market and the star tree. I bought it with my dolls houses in mind-the dolls houses which now look like a miniature version of our flat-too much stuff crammed into a small space-and not even arranged, just piled. I used it this week as part of my carpet sessions with the children, to encourage them to talk about things they see. My favourite thing anyone said about it, was Aliyah saying 'it looks like the stars fell from the sky and into the tree.' Another favourite thing one of the children said this week was Clinton, whilst making playdough food, who said he was making 'Angel snacks'. I had never thought about angels needing snacks but I suppose it is a possibility, and what better to snack on than some playdough food made by a child. 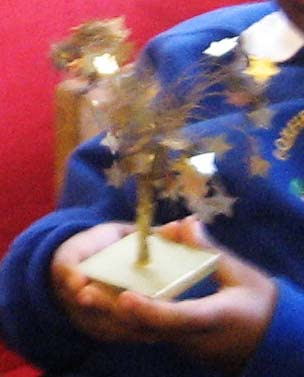 I love working with this age group as they come out with the sweetest and funniest things and they are so earnest, but are developing their senses of humour too. I was reading a book about play today and it was talking about the mess children make during their play, and how early years practitioners need to be aware that to constantly tidy, or insist that children do, is an interruption. I know this and try to abide by it, hard though it sometimes is from the adult perspective! We have a traditional home corner area at work, and every day it gets trashed, clothes all over the floor, along with plates, food, babies-you name it, it is on the floor. I think it is mainly children rushing to get the thing they want and chucking everything else out of their way to do so, but I never seem to see them doing it. But yesterday I was not so sure. I came along and found Charlie in the middle of putting everything under the table, while holding a duplo gun he had made, and looking around frantically. I asked what he was doing and he informed me that the 'bad mans' was coming, so he had to hide everything. It made a strange kind of sense so I left him to it!
Anyway, another busy week over, and I still have not made a periscope, though I have now printed instructions from the Internet, got some mirrors ready, and taken my saw into work to cut the tube. Next week I will do it!
Hope you have had a good week and have a lovely weekend!
Posted by Sarah at 15:15

angel snacks! but then - do angels poo? - don't know- always find it interesting what people are willing to do for invisible beings- Food alters for Buddha in the chinese market intrigue me as well...it just rots- impractical. why not just leave a mache orange instead of a real one? Or play dough which is even better! Kids are so smart!

50p is a vry satisfying price for a bargain I find. I got 2 things today for 50p each, both of them very interesting and useable.
Looking forward to seeing what the bottles will be when they are finished... I love glue guns!

I'm a constant tidier, so I don't think I'd fare well with the children now. Mind you, I was a kindergarten teaching assistant for a number of years and I don't remember that mess ever bothered me at the time. Hmm.

You must fall asleep at night with a smile on your face!

Lovely idea. What a bargain if it gets your little ones using such poetic language. Worth every penny, I'd say! Have a good week. Ros