New and adjusted wardrobes have been happening. Madeline is swearing a new dress and jacket courtesy of Ebay, and a new hairclip from a box of pretty ones I found when tidying. Racer has a new silver jacket from the same bag of clothes, that fits her much better. She also has a new silver skateboard that I found in a box when on the way to work the other morning. There was also a little superhero type toy all broken up which I left behind, and which was gone by the evening. I couldn't believe the luck of the skateboard though, and just the right size! Minnie has an amazing shirt/coat which Linda Sue sent for her. She actually sent three so they all have one when they want it! Thank you Linda Sue! 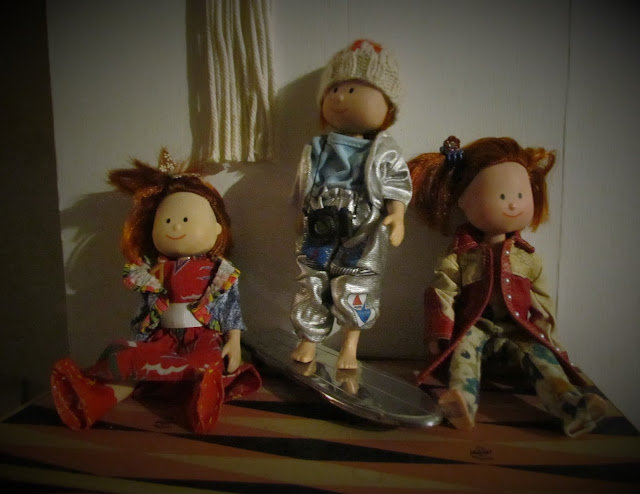 The Womble decided that he had had enough of sitting on the sofa in London, and wants to go to Leeds now to sit in a different place with my sister  and her husband. So he is in the box ready to be posted tomorrow. 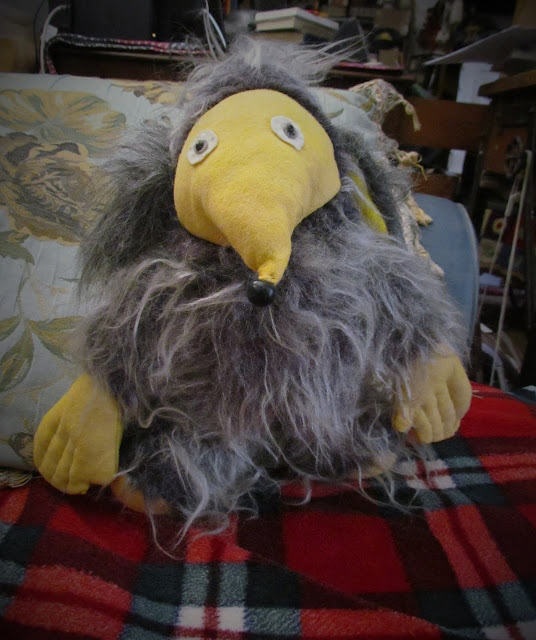 These shelves are Andy's, and were in a terrible mess, not having been sorted for a number of years. So yesterday, in between other stuff, I took everything off, dusted it, then put it all back again much more neatly. The Woodcock and skulls are mine but it is a good place for them up there as they go with the old library feel of the books on the top shelf. The next two shelves down are Andy's music book collection and the few records left from his former massive collection. More books are below and a few small collections. 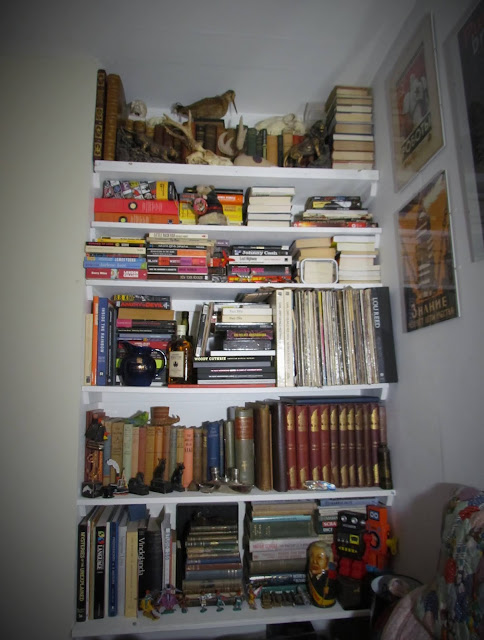 The colours of these books which belonged to Andy's Mum are so beautiful. They could not be seen before so I am happy to have them to look at. I made the little boats on the left, and the other things are either mine or Andy's. 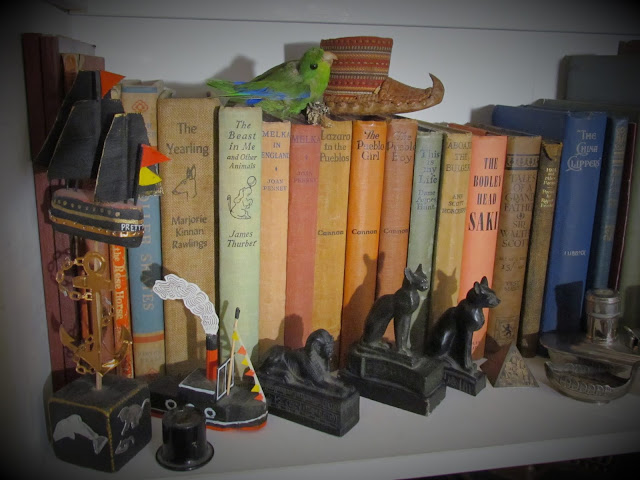 The next piece of toy news is the arrival of these two, Hope and The Baby. They both arrived on Friday, so became friends immediately. Hope was spotted floundering around on Ebay, and so I had to rescue her. The Baby was also there, and I just could not resist her face and her flaws. She has some damage to her ear and the top of her head. One of her arms is moth eaten felt and the other is plaster. Both are hanging by a thread. Her wood wool is showing through the thin muslin type cloth she is made of, and her dress is very grubby. All of these things just make her more special I think. I may do some basic strengthening of her arms and body but otherwise I will leave her as she is. 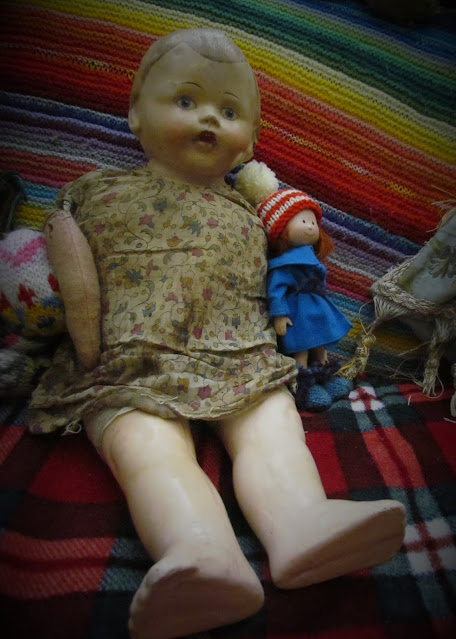 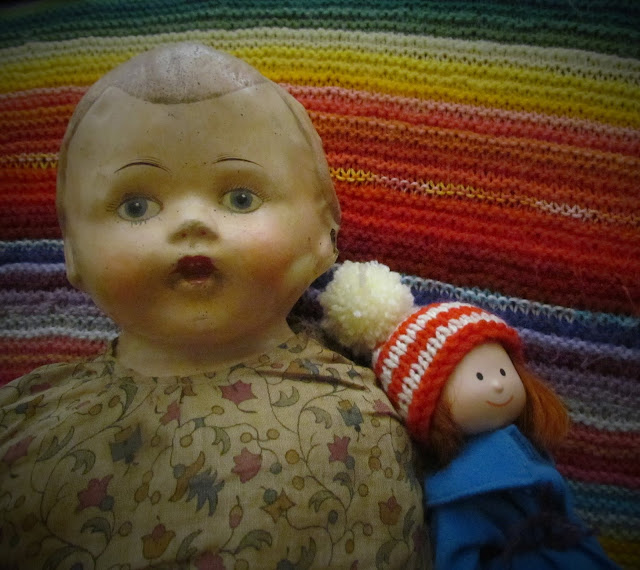 I tried to paint her,  and the box was the result of painting over the top of a star pattern I drew which I didn't like. I have not quite got the lettering perspective right! 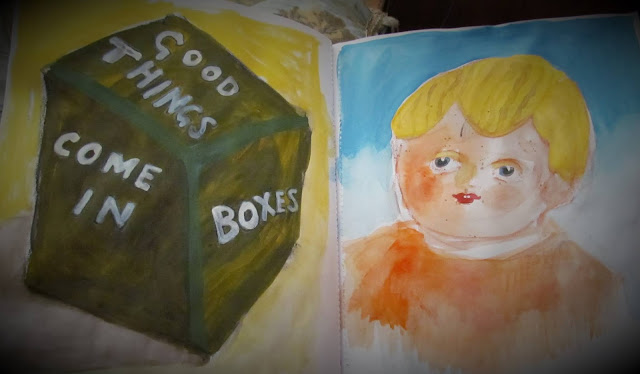 Aaaahhh, A NEW GIRLETTE!!!
Hope is to tiny---I am glad she has made friends with The Baby, who is nice and big.
You are a good Doll Rescuer.

People's shelves are one of my fascinations---
whenever people post photos in front of a shelf, I always want to see what's on the shelf!

Of course many people's shelves are disappointing---
not like yours & Andy's here.
I can't see all the things clearly, but ...OMG so many treasures.
One of my favorites is the bright green parrot on top of the beautifully faded old books.

Racer is living the dream with you---first a pony, now a skateboard!
That is quite a score, a perfect skateboard---and silver too, to match her outfit.
Lucky, lucky girl---and the others too, looking mighty fine in their new duds.
Linda Sue is a good Friend to Girlettes!
Love, love, love! :)

P.S. Happy travels to the Womble, and I enjoy seeing your doll portraits--you inspire me.

Welcome, welcome! To Hope and the baby. I love Hope's hat :)
I also loves the clothes you found on ebay and the things Linda Sue sent. Most things I find on ebay are too big, made for plump 8inch baby dolls or too long and skinny, made for Barbie. The baby things I can adjust, but not the Barbie things, only the pants.
Love your painting.

Nicely curated shelves. Organizing skills do pay off. I need you here, Please. That baby - oh dear. She has seen some shite! Some danger survival in that dolly, I am sure you will be made aware of her stories. I too adopted another red haired Maddy from the orphanage of EBAY. She might arrive this week. ( and the addiction begins) You are to scissor off the sleeves and length of the cowboy shirts for the Girlettes, you realize. Then they can all go ride looking like the wild west!

I love all the old books. "The Yearling" and Saki -- what a great assortment! I wish I could see the records too, but all I can read is "Lou Reed." (Thumbs up for that one!)