I happened to watch a short film made in 1968 on a channel called London Live today. It was called "Swan Corner" and was filmed on a summer day in West Wickham. It is of footage of people going about their everyday business, accompanied by music. I loved it and am pleased that someone had the foresight to make such films as it is so interesting to see how almost everything has changed. One thing I noticed that hasn't is the street cleaner's trolley which was pretty much the same as today.

It led me to look for more films and I found this amazing site.  London's Screen Archives

I haven't even started to explore it yet but it looks good. Just thought I would share my discoveries in case they are new to you too! I knew if I looked through my old photos I would find a swan somewhere. This one is from Northumberland five years ago on the road trip Linda Sue and I took. One of the places we stayed was on the edge of a lake filled with birds! 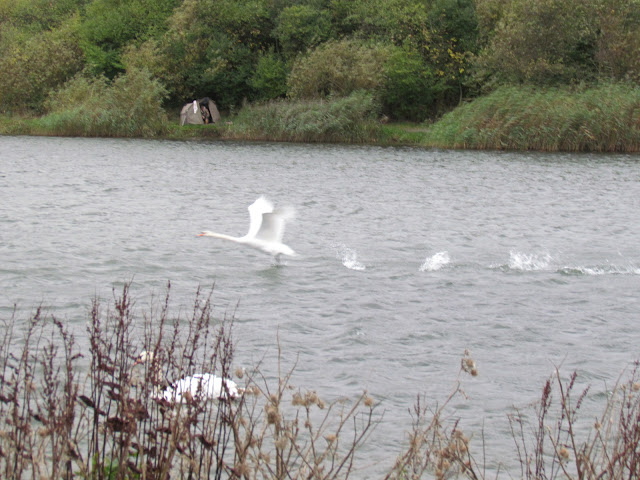 Here is a blurry action shot of one taking off. Swans landing and taking off from water are most impressive. And saying that makes me wonder if they ever land on land?!
Quick edit-"Swan Corner" is on the film archives site.

Excellent capture of the swan taking off. I don't think I've seen a white swan here, maybe I just don't remember. We have black ones on our Torrens River.

Since swan is my namesake, I am excited when I see a swan in action! In our local river, we have two swans who swim together and it's a treat to see.

"Swan Corner" looks interesting. I only watched about five minutes' worth but I'll go back to it later. I wonder who filmed it? It probably says at the end.