Here is our little old cat Lily. She is still surviving, living on the bed with trips out to the sitting room, kitchen and back yard to eat some of the also surviving catnip plant, which she loves. I have just devised a step for her to get on and off the bed independently, using some cassocks rescued from the bin at the church hall where I work in the summer holidays, and a door mat. The mat gives her enough grip to be able to do the little jump required to reach the bed. She is so old-about 20 now, and takes four different medicines each day, mixed into a runny treat called Lick-e-Lix. She has Hyperthyroid disease so takes medication to control this. She is very thin, and her fur tends to get matted on the areas she doesn't clean much. It is difficult to remedy this as she has always hated being combed, and is very sensitive. I have tried all sorts of combs, but today came up with the idea of using a large plastic needle to tease out the ends of the clumpy bits. I cut off the worst of it first. It is like a fibre problem-her fur is felting together. My strategy was working for a while, but then I pulled a bit and she hissed at me. I will carry on trying though! She is totally deaf too, and when she wants us she does a big yowl. When we go to see what is wrong she does a little meow. One of the times she yowls is to let us know she has had a poo! We have a litter tray for her on a table at the end of the bed. One of her drugs is for her joints. She is quite stiff around the hips but can still move around quite fast when she has to, such as when she spots Cassie coming. Andy says the way she walks reminds him of Julie Walters in the two soups sketch. 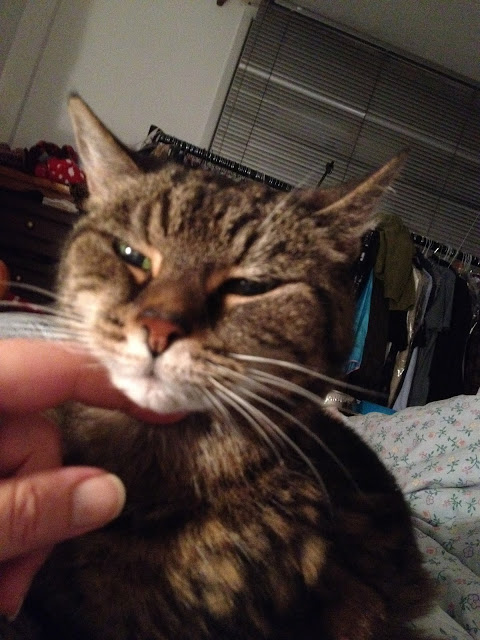 A while ago we came up with the idea of a heated blanket for her, as she feels the cold. It is the best thing ever, and she gets very put out if it is turned off. We put it inside a jumper or pillow case and she loves it. She also has her own scratching post which she has a little go on every day. We were worried about Oliver and her being together when we first got her, but a few lucky swipes and hisses at him when he got too close has given him the impression that she is not to be messed with. He also loves to sleep on the bed or on the drawers next to the window and possibly realises that he will not be allowed to do that if he is not nice to her. This may not be the case but it seems like it, and he was very happy when he was finally allowed to come into the bedroom, which was not for a long time after we had him. Cassie has her own domain in the kitchen-a cushion above the radiator where she spends a lot of her time, so it all works out quite well really!
Posted by Sarah at 16:12

AWWwww you and Andy are such good cat doctors/parents.Lily is very old, remarkable! In people years that must be about 240! Your nursing home for her is wonderful, I think that you have thought of everything an old lady could want for comfort- (move over Lily, I may be moving in...) Good to hear about her , and you. LOVE Xx

Dear old girl, Lily,
When i stayed over that one night- Lily looked at me aghast! "Who are you , where are my humans, get off of my bed- are you out of your mind?" I tip my hat to Lily the cat.

She looks so much like my Lola, except Lola has a white chest. I am glad you are taking such good care of her. My daughter's cat also had the matted fur problem but we couldn't get near her to cut off much of it. K managed to trim a little, but missy carried a great enormous "beard" of long matted fur under her chin until the day she died. She was 21.

In cat years 20 people years equals 96 cat years. I have a chart that I got from the local vet. My Lola is 12 now so that makes her 64. From the age of 2 people years when a cat is 24 in cat years, it goes up by four years for every human year.
Dogs are different, their aging depends on the breed and size, once past three human years, heavy dogs age faster than small dogs, so a big labrador or german shepherd aged 10 would be 78, while a chihuahua aged 10 would only be 56.

Lovely to meet Lily. What a lovely girl. If she's about 96 in people years, as River says, she's my auntie Vi's age. My auntie also loves her electric blanket!

Wow -- about 20! She is definitely a senior cat! And very fortunate to have you as her "people."