On Saturday, we set off for our walk in beautiful weather. The route I had planned became a different walk altogether when we set off up this path instead of crossing the railway as we had intended.
At the top was a fence, but the fence had a hole in it, so we squeezed through. What we found on the other side was the most magical place I have been in this area, if I don't count the foreshore at certain times when nobody is there. There were trees, gorse bushes, and the most amazing views all around. 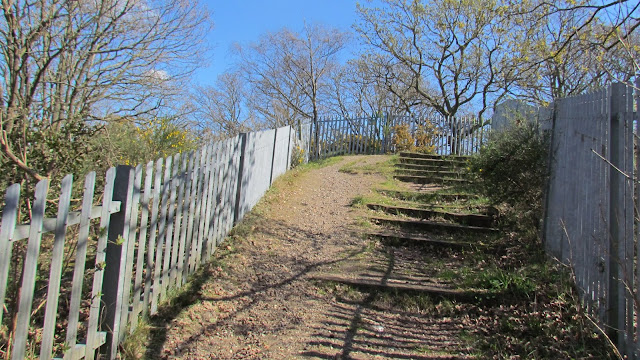 There was a narrow dirt path which just had to be followed. 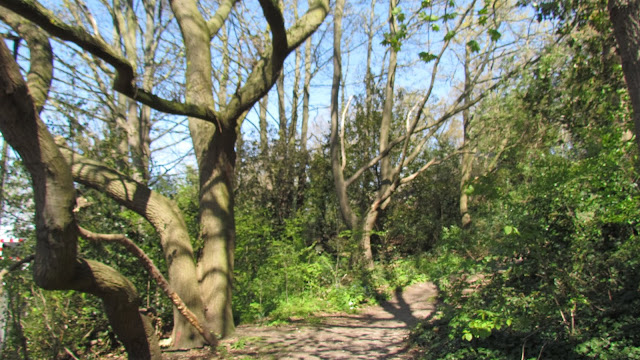 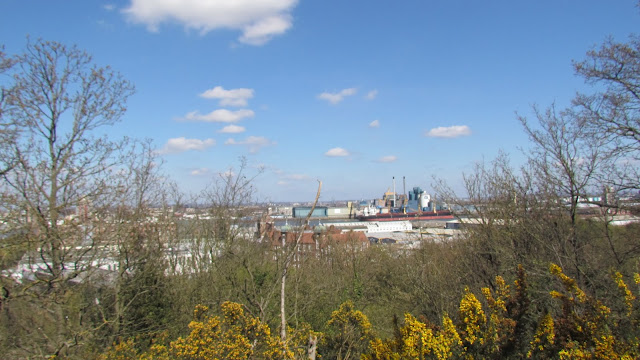 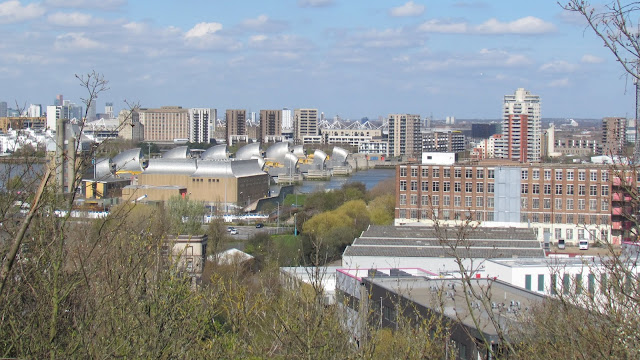 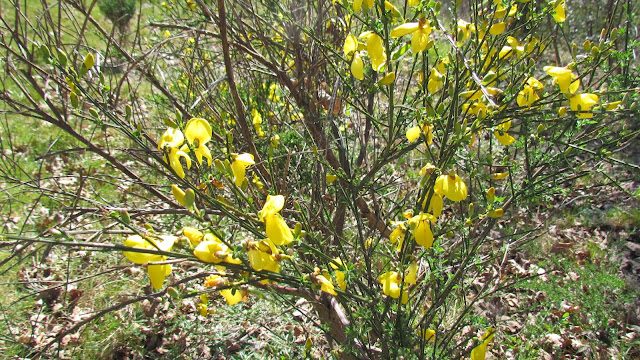 It wound on, and in the hot sun that we were lucky enough to have that day, it was as if we were not in London anymore... 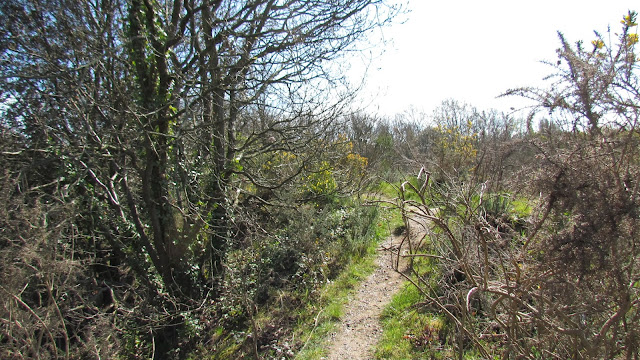 ...but then the distant views would remind us we were. 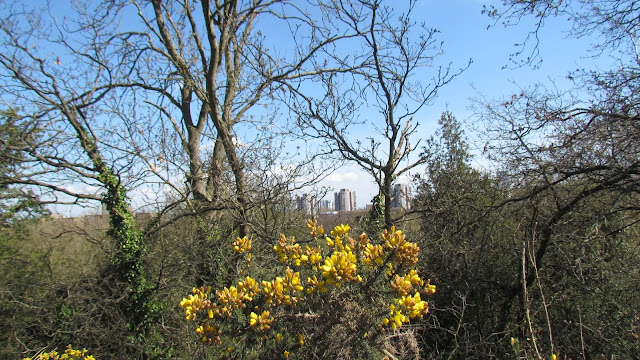 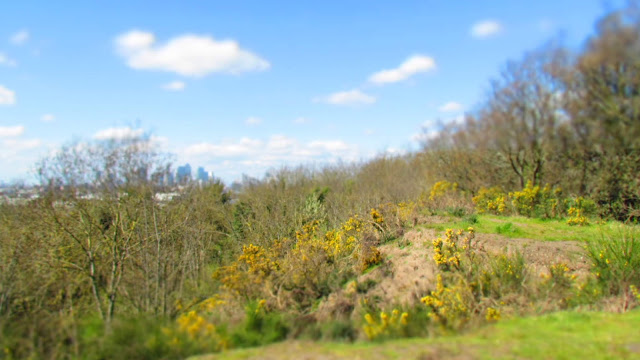 There was one section of the path that was very narrow, but we carried on as far as we could go, until another fence stopped us. Far below we could hear people in the park on either side of us. 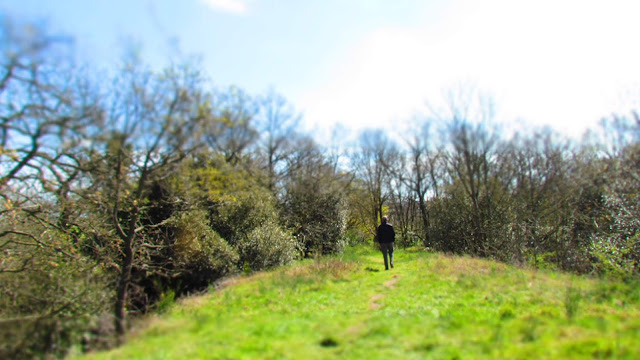 We probably won't go in there again, as, from signs we saw later, we discovered it is a Site of Special Scientific Interest, and I don't think we were meant to be there. I don't think we did any harm, and I am so glad we saw it because, as I said, it was magical, all the more so in these weird times. 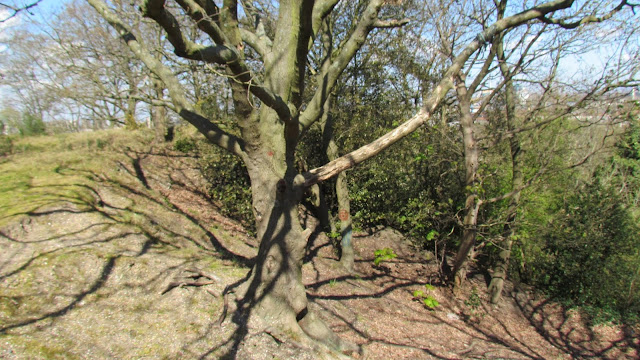 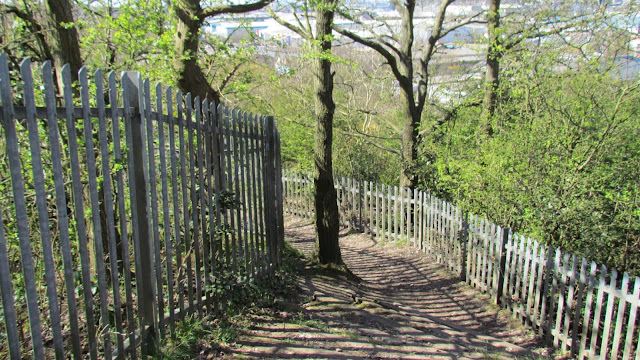 Back down the steps, and, at the bottom, we turned left, to find what we had seen a sign for earlier, a place called Gilbert's Pit. I knew about it, from conversations I had at work with a colleague who lives next to it, and from visiting the Horniman Museum, and seeing fossils found there. I looked it up at the time, but never got around to visiting it. The pit is an old sand quarry, the sand being used to supply the glass making industry. It is part of a large park, called Maryon Wilson Park, after Sir Maryon Wilson, who donated 12 acres of land to the London County Council in 1889. The park opened in 1990. There is a very interesting history of the park here. It grew over the years, with the disused quarry being purchased in 1930.
Gilbert's Pit is named after Mr E. Gilbert, one of the quarry managers. There was a Romano British settlement on Cox's Mount, at the top of the pit, between the first and fifth centuries. The area was part of the ancient Hanging Wood, which lay between Woolwich Common and Charlton. This wood was a hiding place for highwaymen. Maybe all of this history explains the atmosphere of the place.
While we were there, I noticed some very smooth black flint pebbles. On looking at information on the pit later, I found that these are characteristic of the Blackheath Beds. Having done a bit more reading of quite difficult to understand geological information, I can gather that these pebbles are about 55 million years old, and come from shallow coastal waters of the Eocene period. Mind blowing, when you are up a high hill like that to think of what it was.

Here is the cliff in the pit, showing the layers. 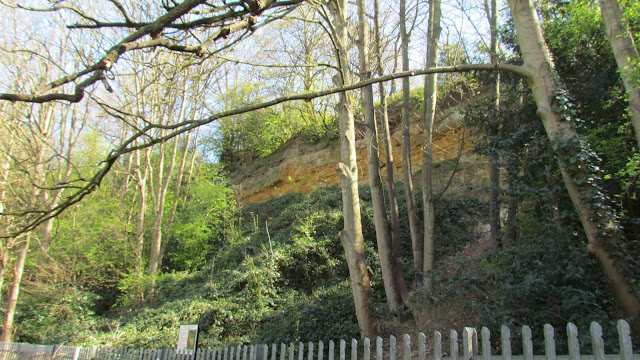 Blue sky and blossom on our way out, and a quick hello to the colleague I mentioned earlier, who was sitting in her garden with her daughter when we left. 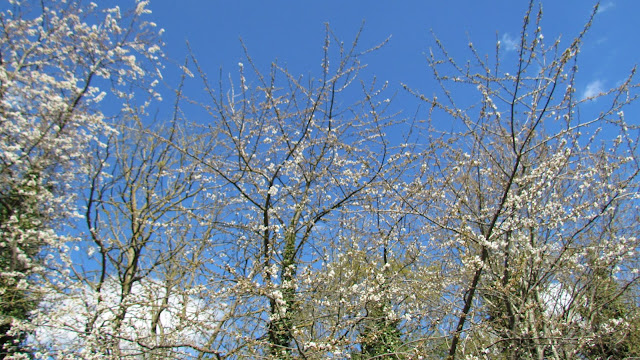 Such an exciting and gorgeous adventure! Perfect day! The view of the Thames barrier thing is so impressive. The fenced path like a fairy tale path! So glad you went through the hole in the fence, without apology! Splendid shots. Interesting history . Just way cool .

I have been to that very park and climbed that hill! I don't think I was in an area of scientific interest, though, so maybe it wasn't the same hill. Anyway, it's a beautiful area! I believe the film "Blow Up" was filmed partly in that park back in the '60s.

WE are so lucky to have had beautiful weather. Fascinating to think that high hill was once on the coast! (or have I misread that?)