Faces (Lots of faces-probably too many faces!)

There are so many faces in here, and I thought I would share some of them. I remember where most came from. If you don't like dolls please look away now! 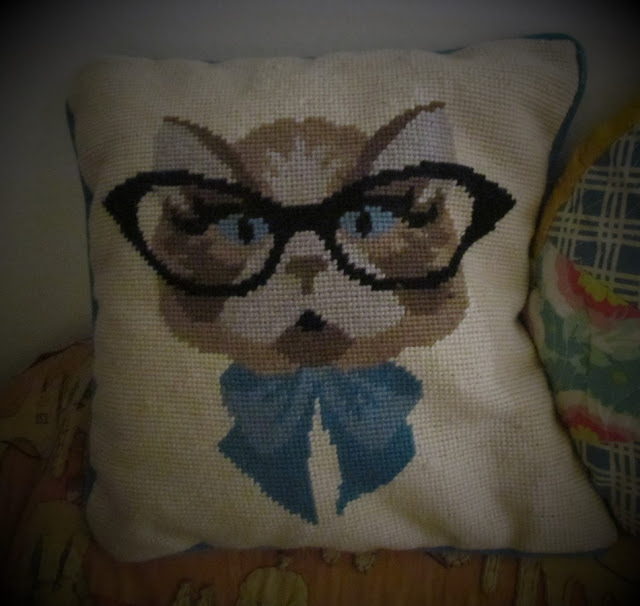 Cat cushion, a present from Jenny. I have also seen this design on a jumper. 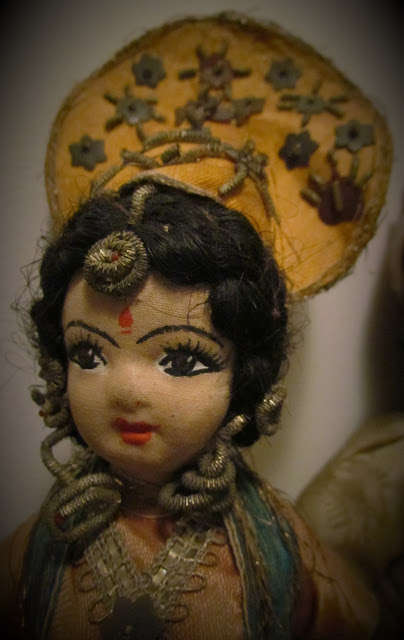 Doll from Headcorn. She has very beautiful and detailed clothes. with lovely tarnished silver ribbon. 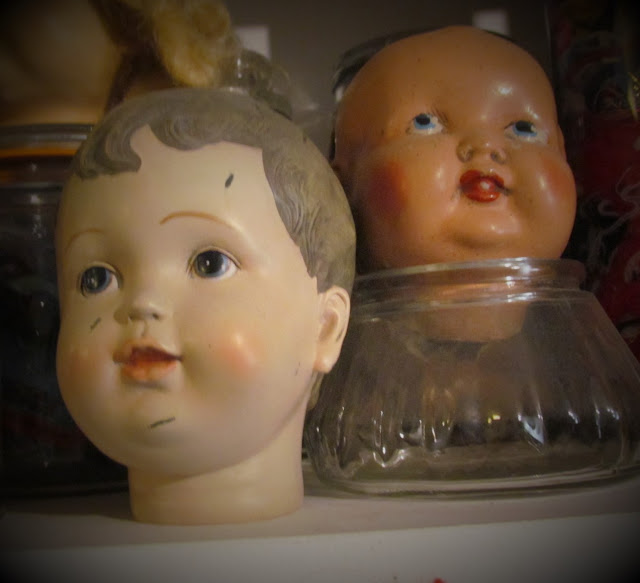 Modern doll head on the left from Helen, and old one from eBay. 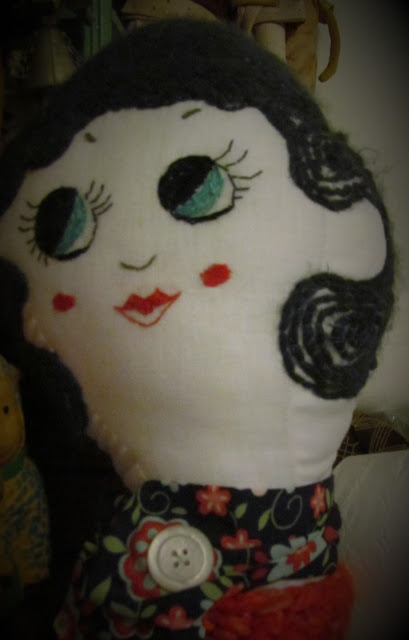 Cloth doll head I made to go on top of a wire dress form I used at a craft fair to display dolls and scarves. 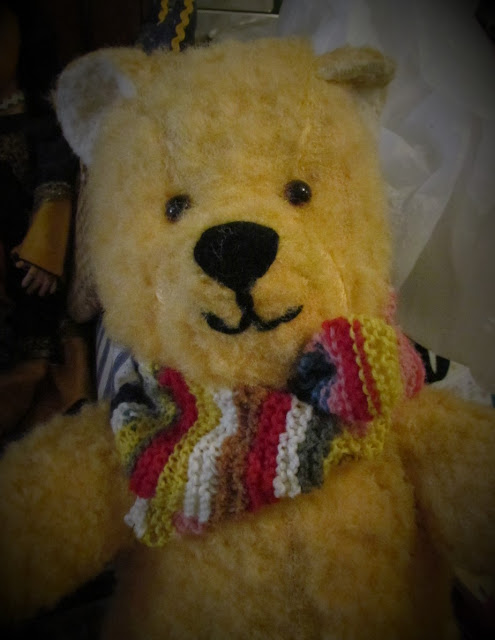 Deptford the bear, from Deptford market, re-stuffed and cleaned, with a scarf made from some of his former innards. 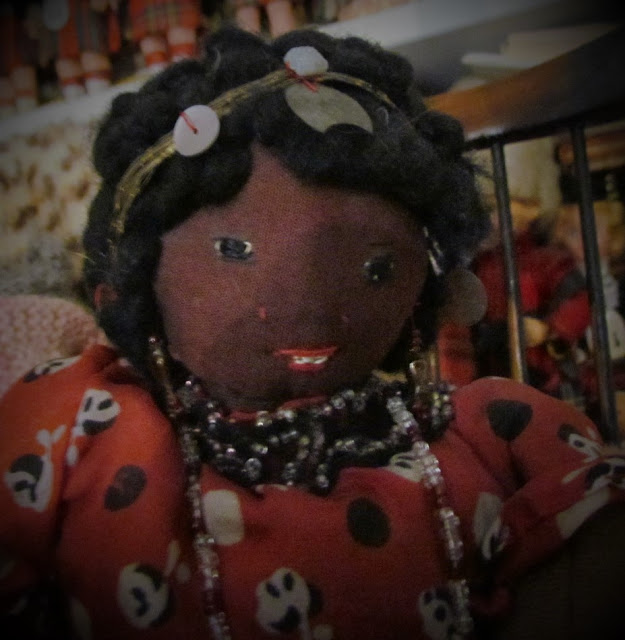 Beautiful 1930s doll from Otford, and early birthday present one year from Chinmoyee. She has a lovely crepe de chine dress and silk petticoat. 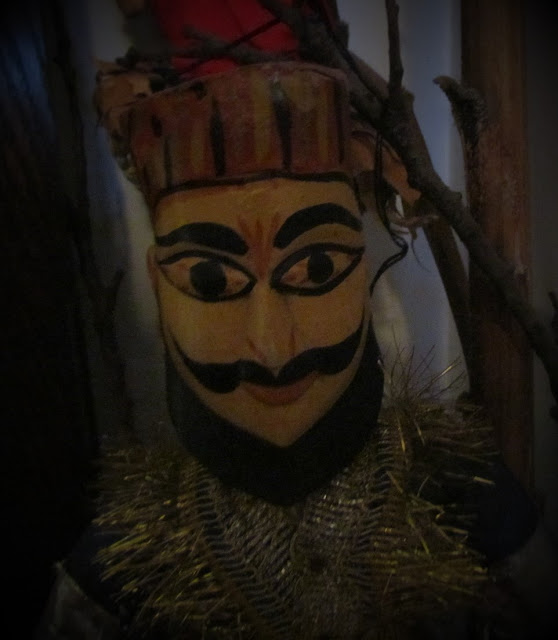 Indian wooden puppet from charity shop on Trafalgar road. I love these puppets and have quite a few. I have used some of them over the years for Diwali storytelling. 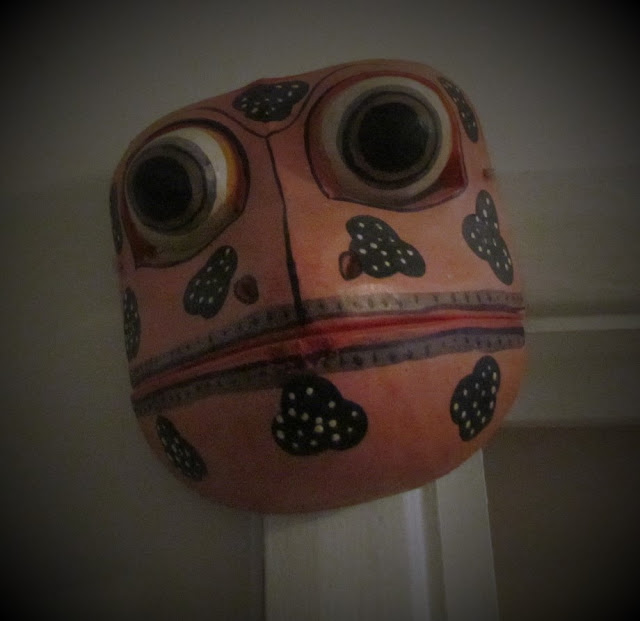 Frog faced mask. Not sure which country he is from. I got him for 50p at the bootfair in Thamesmead which I love going to. 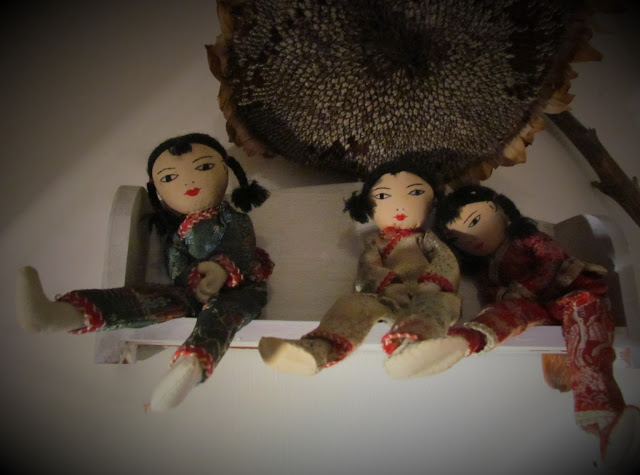 Three little Chinese dolls from eBay. They sit on a tiny shelf in the hall, under a two year old sunflower seed head. 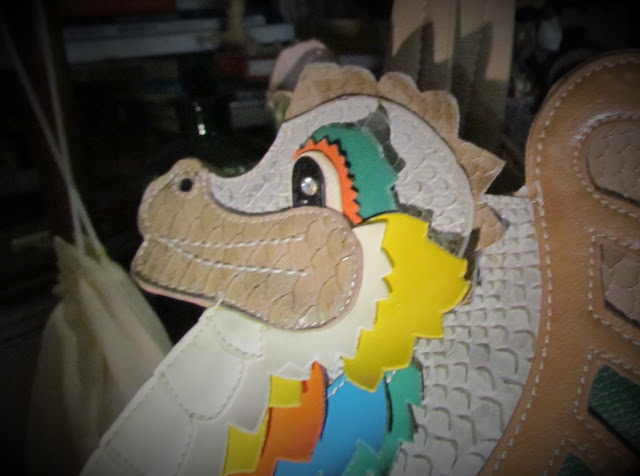 Dragon bag from a charity shop. I use this to hold objects for my weekly storytelling activity with Reception children. At least I did until recently. 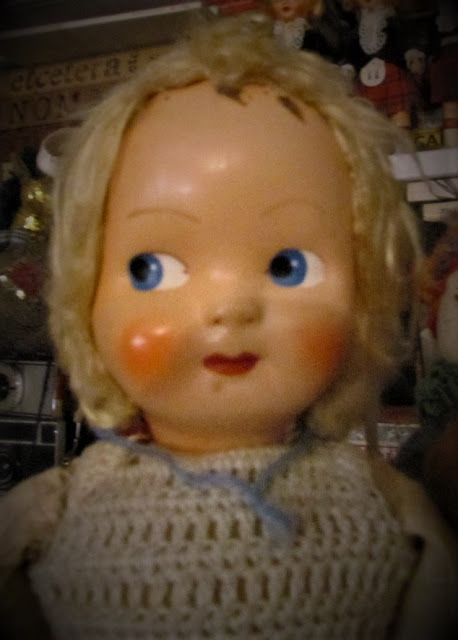 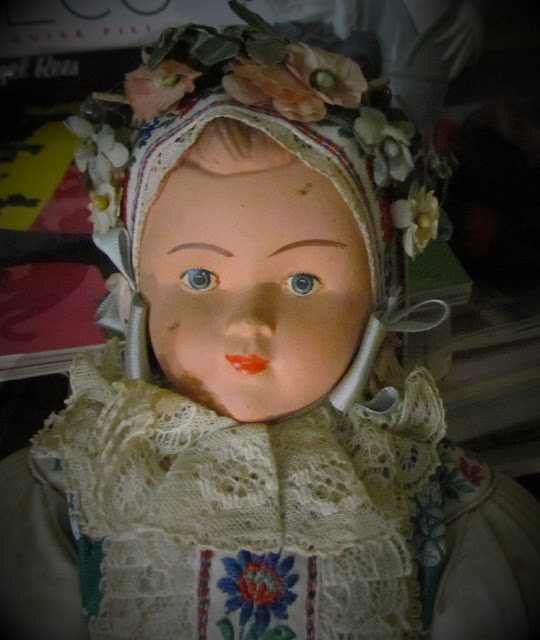 This is the latest addition to the house. I have not done a lot of internet shopping at all, but I couldn't resist her from eBay and she arrived yesterday. There is such detail in her clothes and she is also very pretty. 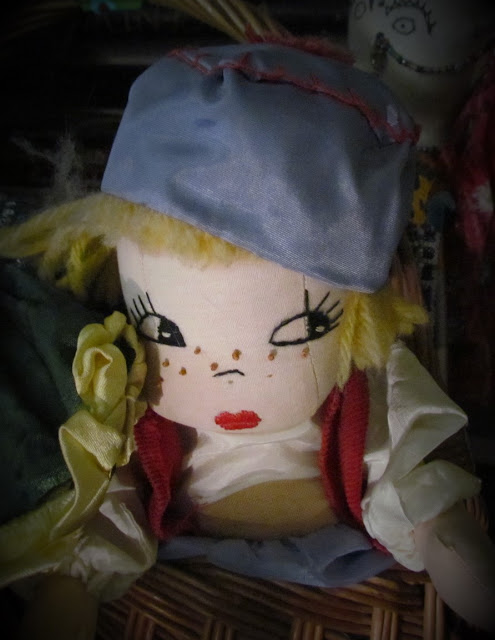 Blue boy, also from Linda Sue. He lives in a basket with his friends. This doll was rescued from a skip at the back of the Cats Protection shop as I was donating a bag of stuff. The scarf is my first and most successful attempt at moebius knitting, a technique where you cast on two rows at once on a circular needle, and the piece grows out from the middle. I would like a scarf like this doll, but my attempts at this have produced long skinny things, that do not wrap around like this. I just can't seem to work out the right amount of stitches to start with! 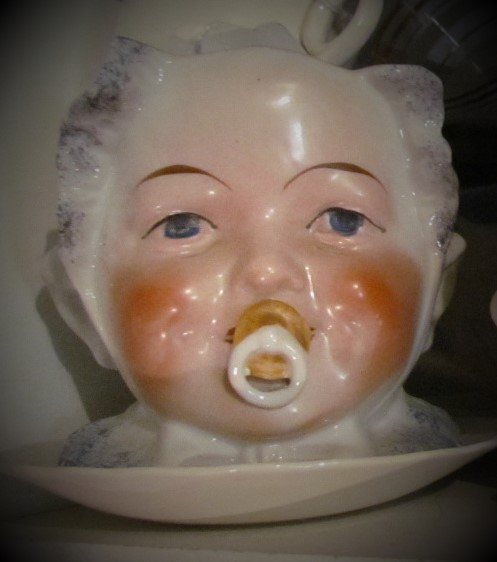 This is one of two baby faced containers I bought years ago in Greenwich market. They are tobacco jars! It seems like such an inappropriate subject for such a thing. 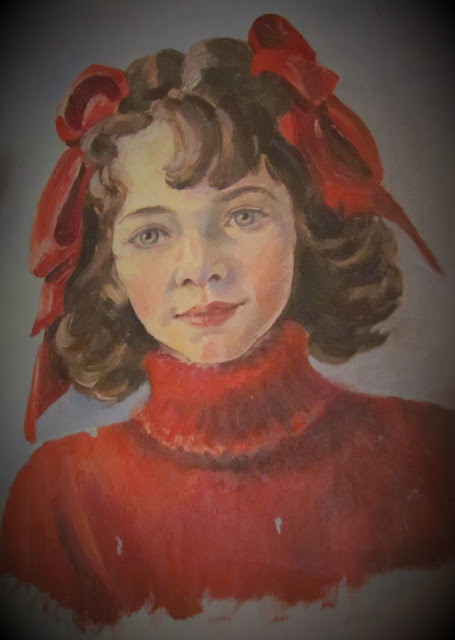 Painting found in a charity shop in Edinburgh when we were up there to see Andy's Mum. 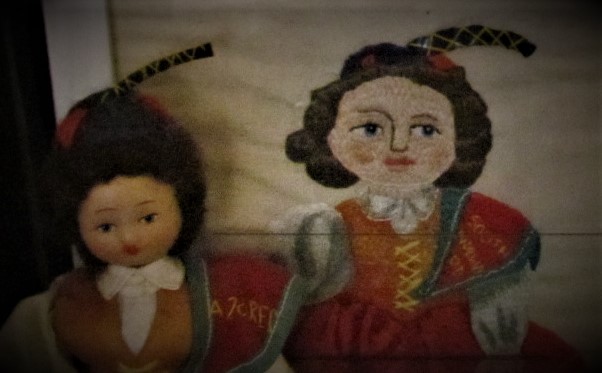 Doll from dark little charity shop in South Norwood, where I went to do an embroidery course. I then embroidered a picture of her, changing Azores to South Norwood. 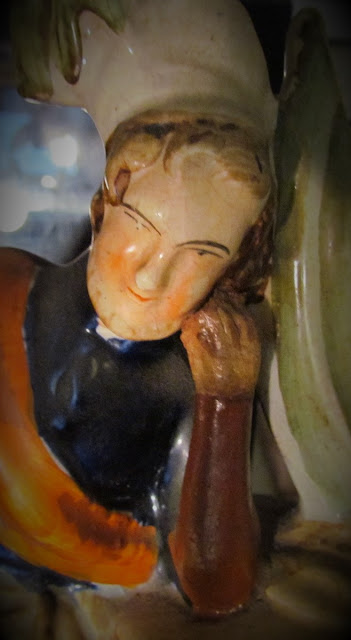 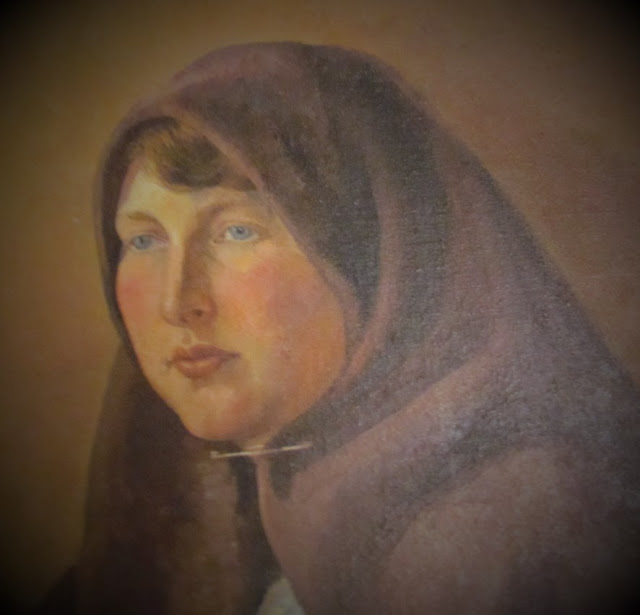 Another charity shop face. Another bargain! 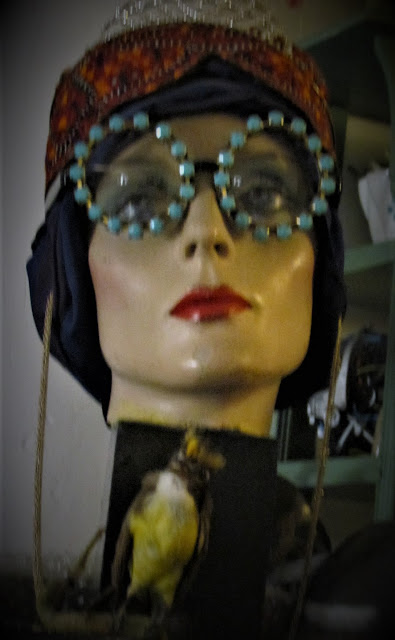 I love dressing this head up. I think it from a larger mannequin and has been mounted on a wooden block. Greenwich market. 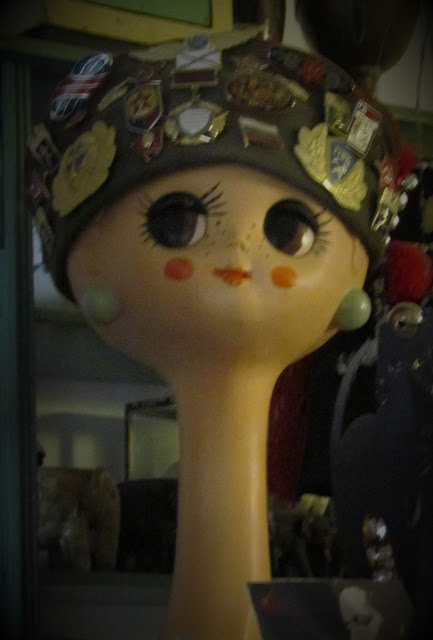 Also Greenwich market. Her hat was a bargain from Rye. There are loads of Russian badges mounted on it, which I intended to sell, but like too much. 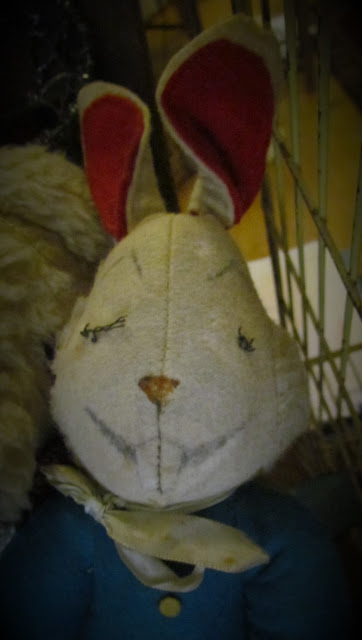 This bunny was in the charity shop for my last three visits there before I bought him. He needs face repairs. I think I will just embroider over the marks. 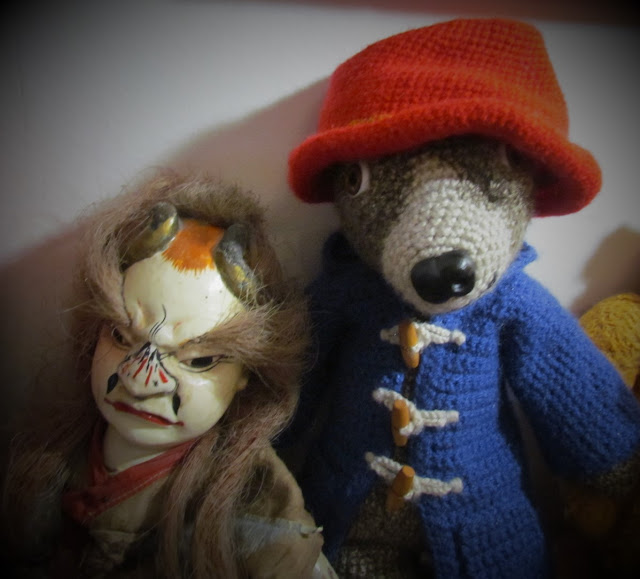 The unlikely pairing of serious puppet and Paddington. I think they get on quite well. 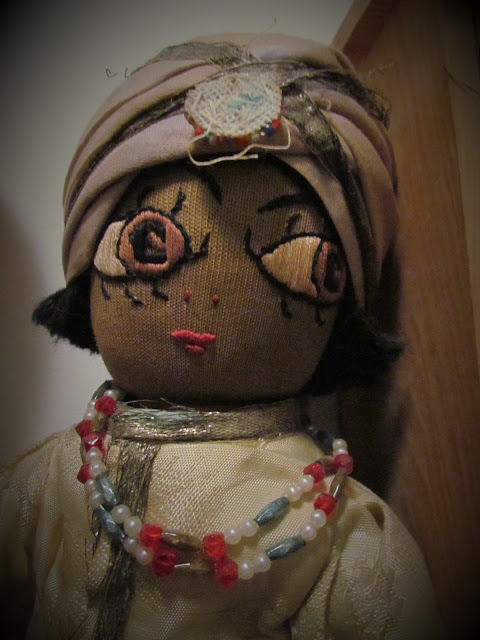 And finally another eBay bargain, again with tarnished silver thread. The turban is silk. I love the variety of ways to make a face, and this embroiderer has made such great eyes.
Posted by Sarah at 05:20

I love all these faces and am thrilled to meet some of your dolls!

AND DEPTFORD!
He looks so happy and touchable.

I'm impressed that you made a scarf from his old stuffing.
I've wondered if I should learn to knit so I could make tiny clothes, but I don't seem to be doing that...

I'm always interested in how my toys make friends among themselves--they'll end up together without my planning, and some incongruous friendships form, like your Paddington and puppet.

The girl with the red ribbons in her hair (painting) could be a relative of my girlettes--my little red-hair dolls.
They all have the same basic face, but it's interesting to me how their different personalities can come through in photographs.

The baby with pacifier (do you call it a dummy?) as a tobacco jar is wild!
Were the makers thinking tobacco is a grown-up's pacifier?

Thanks for sharing. I want to come have tea with your toys!

Yes maybe that was the thinking-tobacco being the grown up pacifier! The dolls would love a tea party any time and they are always (pretty much)in!

Quite a collection, and some great stories! The cloth doll head you made is very Betty Boop. And I love the frog mask!

You know that I am a sucker for every one of these faces! And I know that there are so many more in your well curated home of curiosities. They are all very glad that you chose them to live with you!

You have a wonderful eye, Sarah. Where I, and others like me, see 'junk' you see endless possibilities. I think my favourite in your post today is the painting of the girl in red - such a pretty, intelligent face. I wonder who she was?

You got some lovely treasures!! The painting of the little girl is so sweet.
I do hope you finish Dracula. The third episode is a bit crazy but the ending is satisfying enough. I heard they might be a season two. I hope they actually do that.