I have been making this doll for ages, and finally completed her recently. She is called China Doll, for obvious reasons. She is made from Thames finds, a doll head that Linda Sue sent me, string, wax and clay. I have been thinking about how to use clay pipe pieces, and doll limbs seemed a good use. The body is air dry clay with tiny pieces of blue and white pottery pressed into it, then covered in wax. The hands are painted with red wax, like the ends of some of the pipes used to be, to stop them from sticking to the lips of the smoker. The hair is dipped in wax, and it was a happy accident that it turned out as if she is on a windswept beach, as the wax hardened almost immediately, producing hair that stands out from her head. I was going to use a copper light bulb base for a hat, but none of the ones I have found fitted, so a small oyster shell did the job instead. She is standing in an air brick, surrounded by a garden of rusty nails. As well as the fact that I like the brick and nails, I also like the fact that I didn't have to make her any feet! 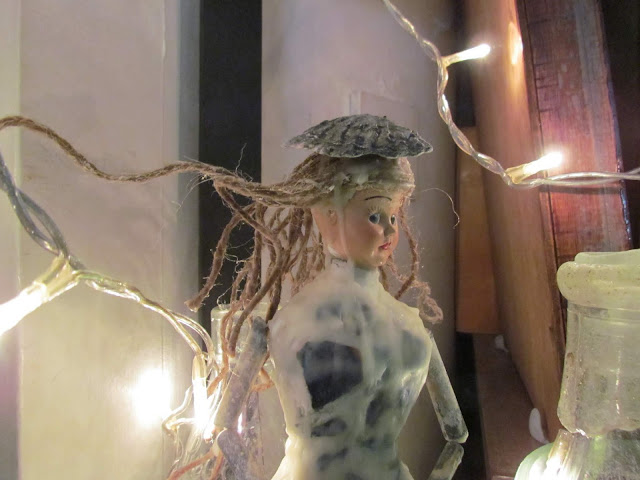 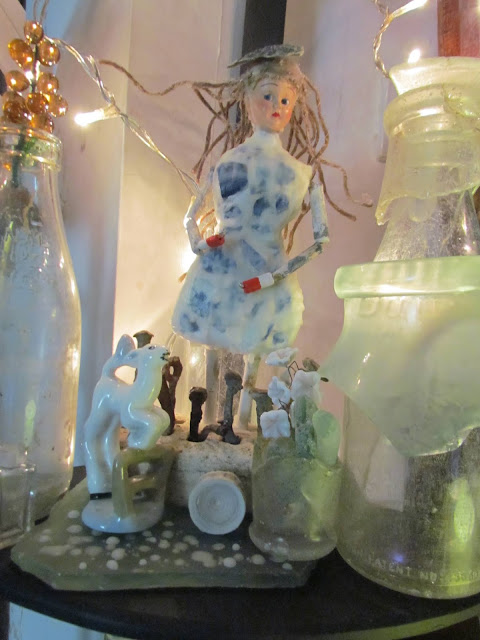 The book houses are related to a project at school. I enjoyed making them. I especially enjoyed placing the tiny people! 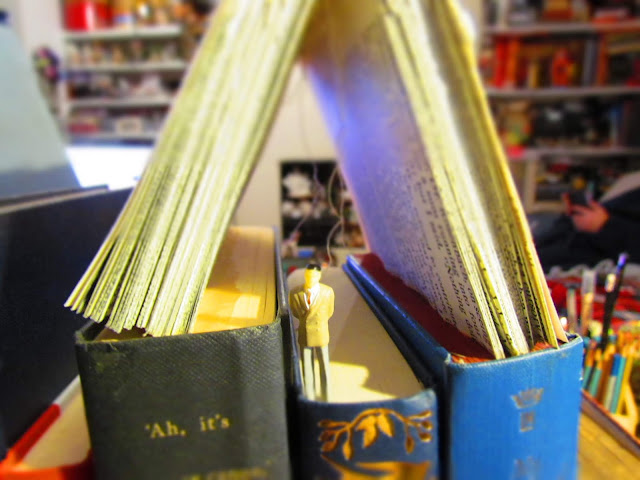 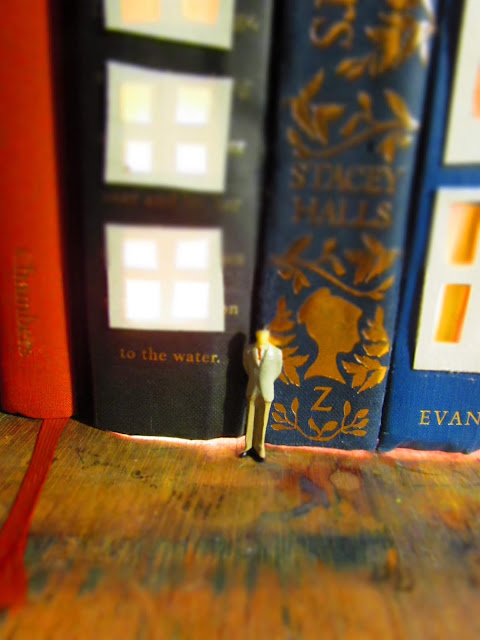 They are spookily faceless, and remind me of The X-Files,
or Men in Black or something of that sort. 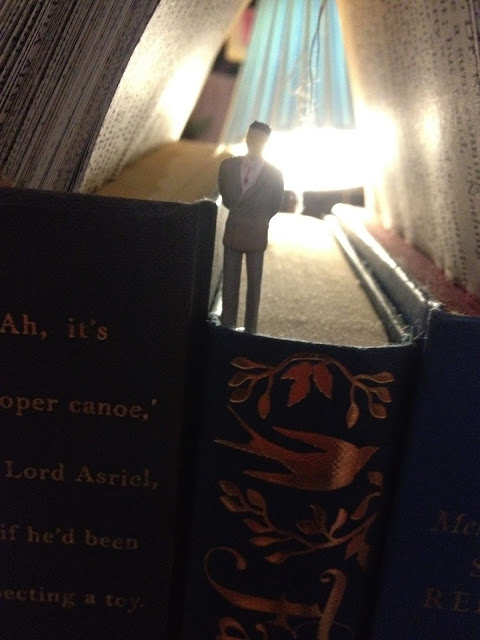 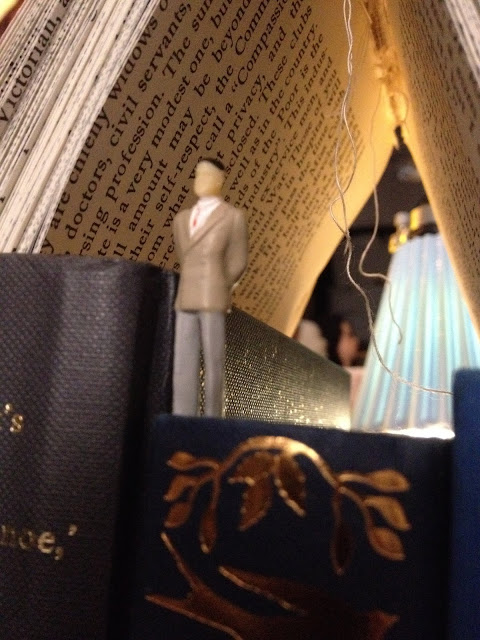 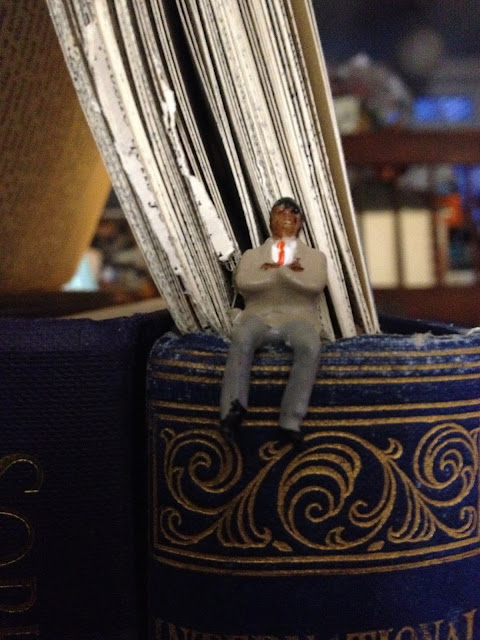 I used glaze acrylic glaze medium on the door, as I couldn't find anything else to make it shiny. It has dried clear and looks like glass in the panes, again a happy accident! 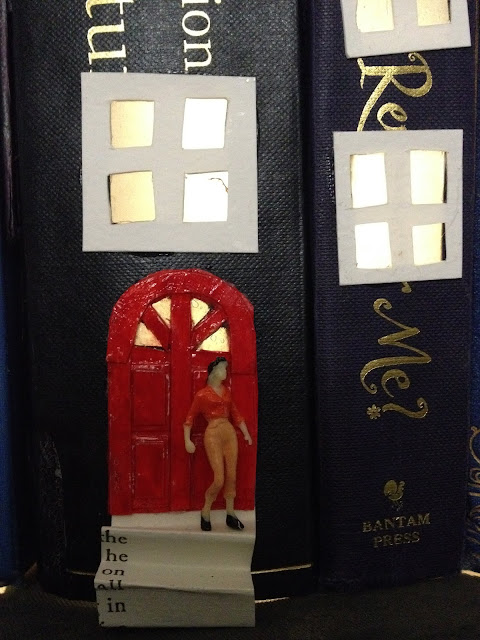 I used tracing paper in the windows, one of them coloured with yellow alcohol pen. 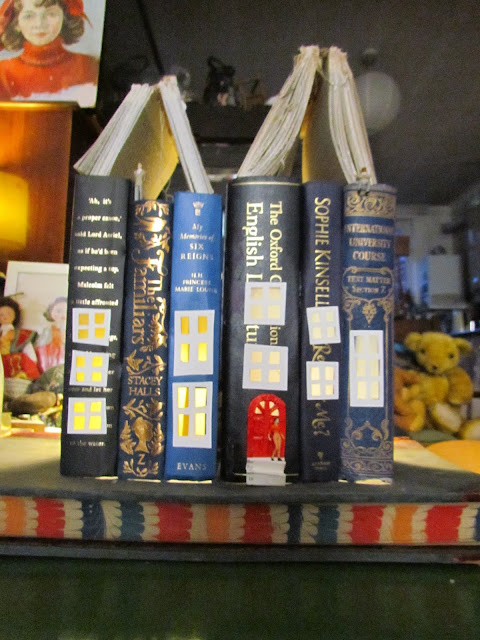 The book they are standing on is an amazing find from Deptford market, It is a ledger, marked 'Bottling Inwards'. It is largely empty, sadly containing no records of use, apart from a child's use of it as either a stamp album, or football record. I just couldn't resist the way the pages are decorated. It was £5 which I thought was a bargain! 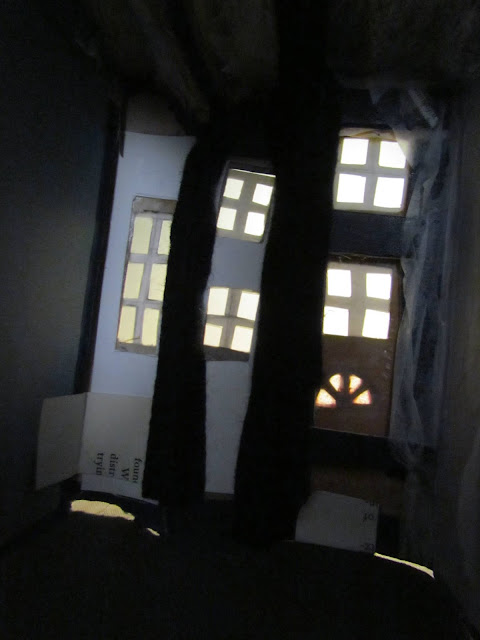 Inside the houses, where a lot of cutting of paper, gluing and strengthening went on. 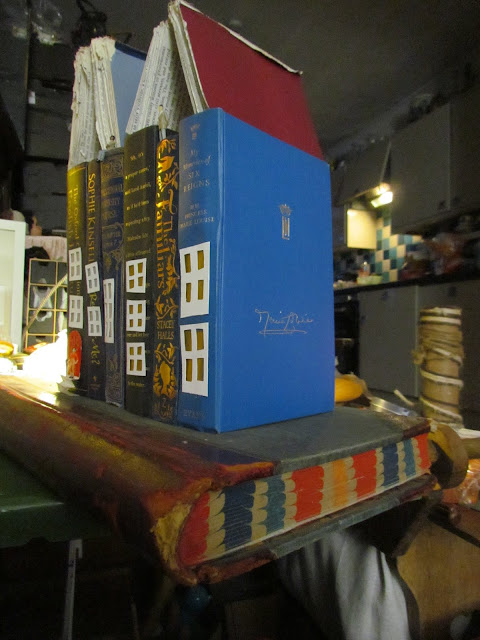 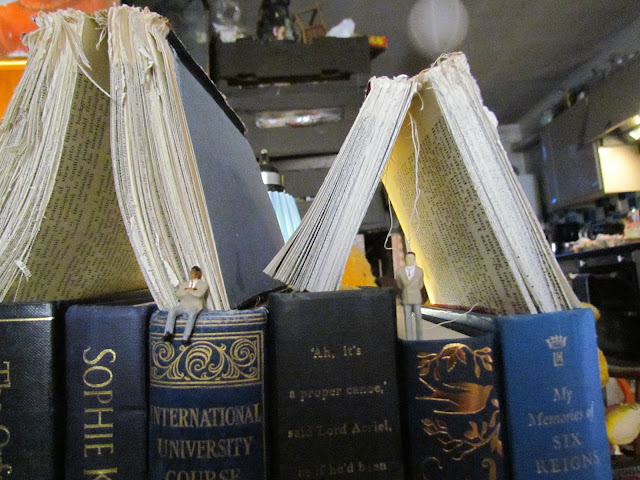 I found this little plastic Halloween cat buried in the mud at my favourite piece of shore the other day. It is the first animal I have found! At first I thought it was a flint, shaped like a cat, as flints seem to be able to look like anything. I was pleased to see it actually was a cat! 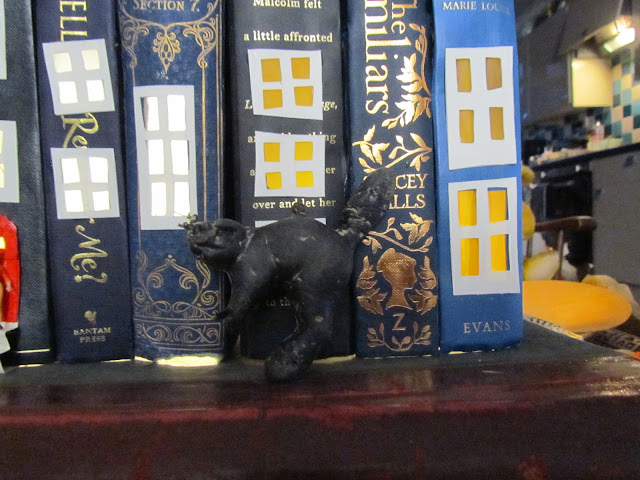 I was also asked to make a treasure chest for the same project. I was not looking forward to making the box part and had been hoping to find the perfect box to convert. Again, Deptford market came good, providing both the box, and a massive tangle of costume jewellery to fill it with. I like untangling things, not sure why, as I am not that patient a person, but I spent about a week fiddling around until it was done. 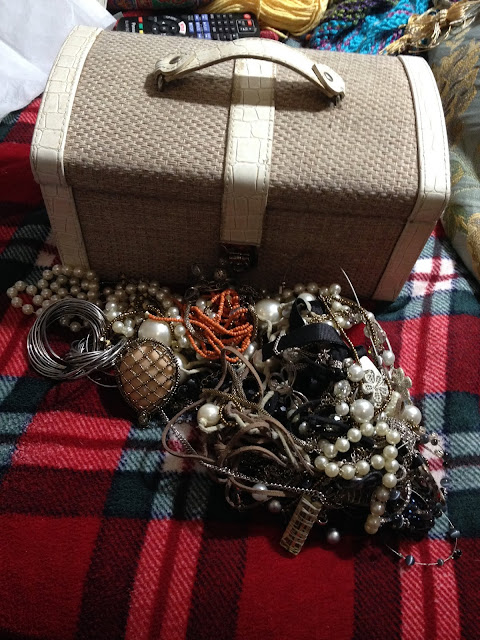 Not a very attractive box, but exactly the right shape. 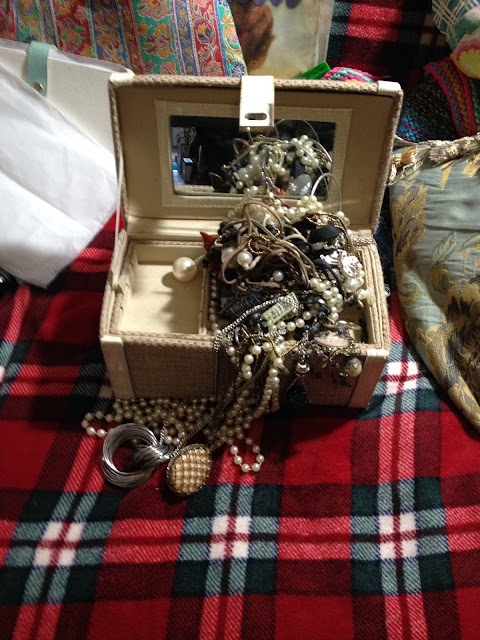 I covered it with linen fabric. 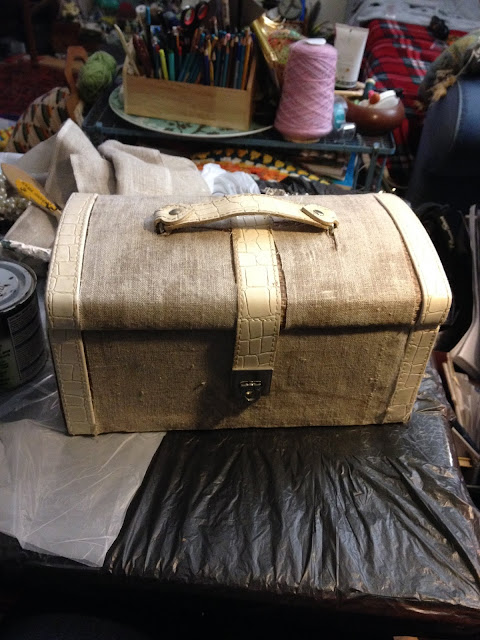 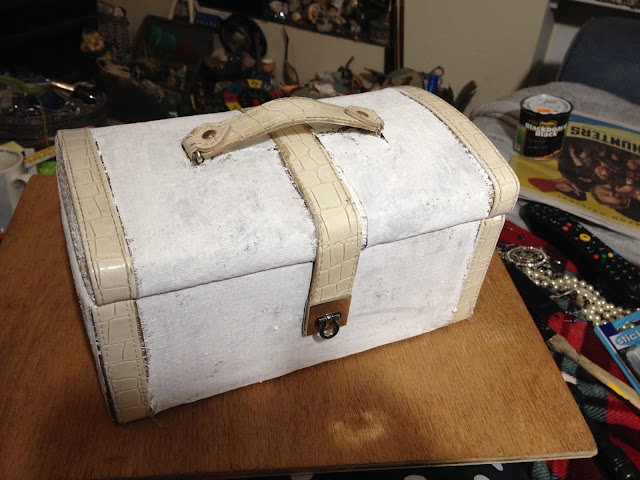 Then I painted it all with blackboard paint. No special reason, just that it is very matt black paint and I happen to have some! 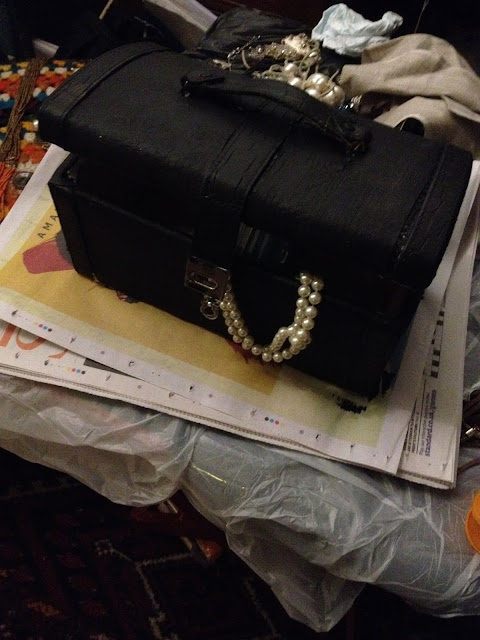 I used gold polish on the straps, wood grained the black with a brown paint and my wood grain tool, and also used some shiny turquoise and green paints to make it look a bit sea worn and old. 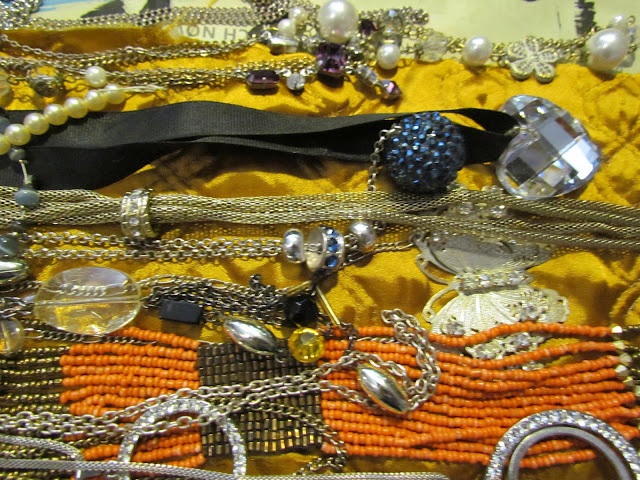 The jewel hoard untangled! I kept some of the nicer things. The most useful bits were the incredibly cheap and nasty pearls. There were also some slightly better ones which I used too. I added some yellow and orange beads that I don't like, after adding shiny gold and green polish to them, to make them fit into the look. 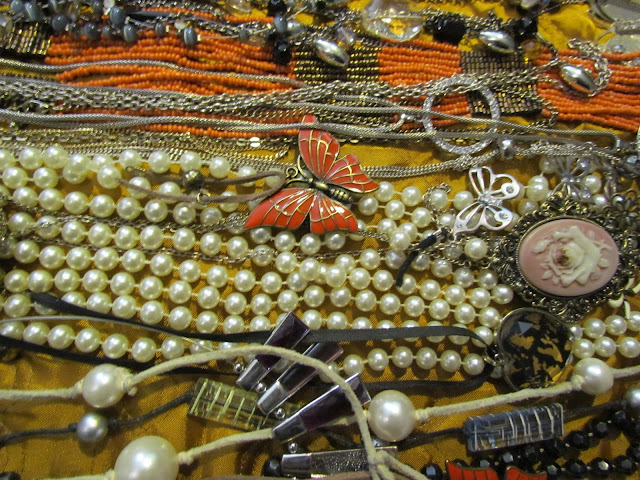 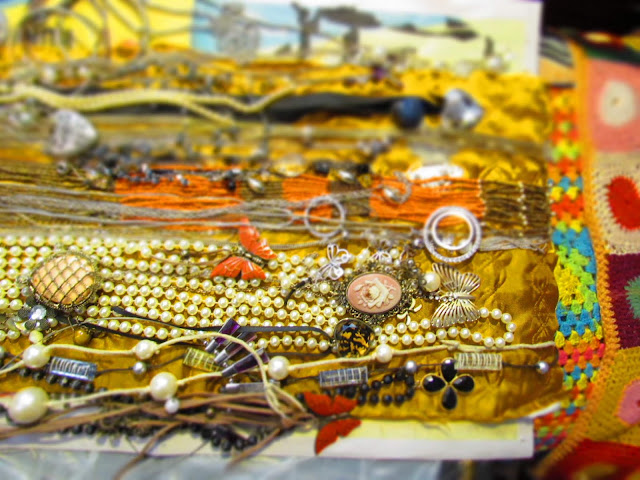 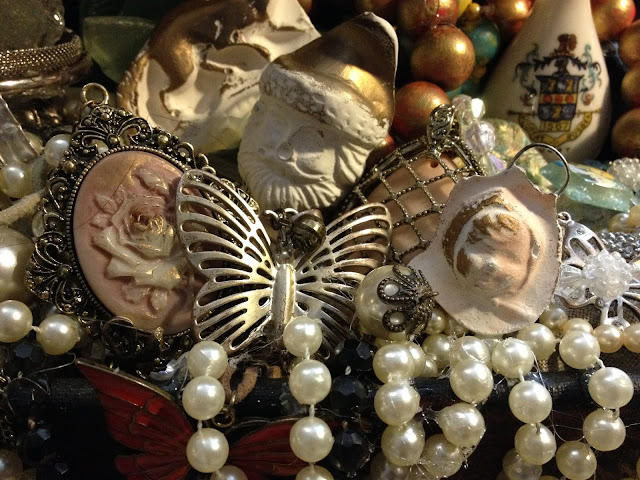 I added a little china vase, and some gold enhanced plaster things I had lying around from previous experiments. 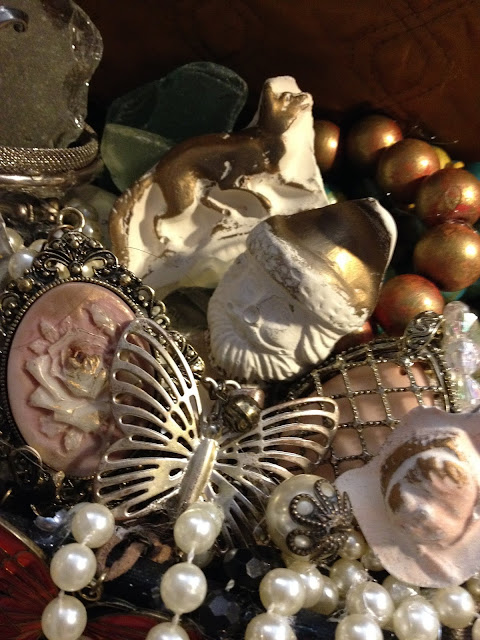 I lined the top of the box with some lovely satin quilted fabric I have had for years. I have a huge amount of it, bought at a jumble sale for about £1. A few pieces of river glass went in, and a tiny sword I made for something else but didn't use. I did the fun part of gluing it all in last night. I am pretty pleased with how it turned out! 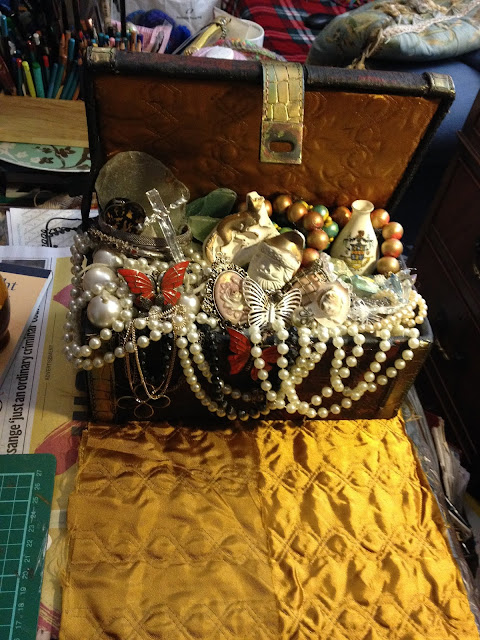 Wow, Sarah!! Fantastic pieces of art!! I loved the previous treasure chest, though. The China doll, book house project, and the spooky faceless dolls were attractive. Keep working on amazing crafts, Sarah!! It was lovely reading your blog.

Oh, wow! Your doll and your book houses are wonderful!!!
I haven't visited your site before---
I just now (sitting home in the time of covid) visited Art Sparker's long-defunct blog–– where I once met blog friends–– and was looking at live blogs on her sidebar, and there you were, first post up, with a rather adorable handmade (crochet?) coronavirus!

I work in a thrift store (in Minneapolis, Minnesota, USA), and fairly often we get donated broken dolls-- heads and parts. I've wondered what to do with them. The ladies who sort toys usually throw them out. (Noooooo...) So I save some of them...
Maybe I will start to make something of them.
Except, alas, they are at work and I am at home, for the foreseeable future.

LOVE your work--thanks for the boost on this gloomy day--(it's actually snowing here a little...)
On we go!