I went back to Erith on Saturday with Andy as I wanted to look at the pier which I missed on Friday. There is a Morrison's supermarket so we could combine a walk with food shopping. This article from The Londonist explains the history of the pier. The information below is from there. The wooden pier that used to be here was 444ft long, opened in 1842, and a hotel called The Pier Hotel was built. Erith became popular as a tourist destination, and also had two steamer ships, The Star and The Diamond, calling there twice a day, on their route between Gravesend and London. So, gentlemen could commute, and enjoy a breakfast on the boat, including wine! The railway came to Erith in 1849, so the use by commuters changed from river to rail. Then, in 1865, The Crossness Sewage works opened, and, instead of floating out to sea as predicted, the floaters and other sewage headed up river towards, Erith, making it far too smelly for tourists. The pier was used for cargo ships until the 1950s, as the water was deep enough for them to dock. The pier was not fit to use by 1957, so a new one was built. The current concrete pier is 360m long. The hotel was demolished and warehouses built. As the town changed through the 60s and 70s, the pier was no longer used and was abandoned until the 1990s. In 1999, Morrison's built a supermarket on the site of the old deep water wharf, and retained the pier for the public to use. It is used by people fishing, walking and getting some fresh air. When we visited there were a couple of anglers and a sweet dog right at the end, a couple of families and dog walkers, and us. It feels great to be out in the river on solid ground, above all the oozing mud, with a great view of the birds. 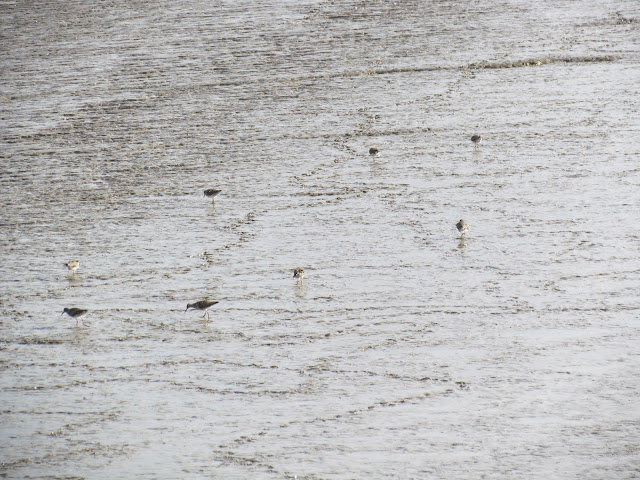 I think these are Black Tailed Godwits. They form monogamous couples that can last for 25 years. When migrating, they arrive within three days of each other, then mate. Amazing! If they are wintering in Britain, then they spend the summer in Iceland. The ones that breed here in the summer, spend the winter in Africa. 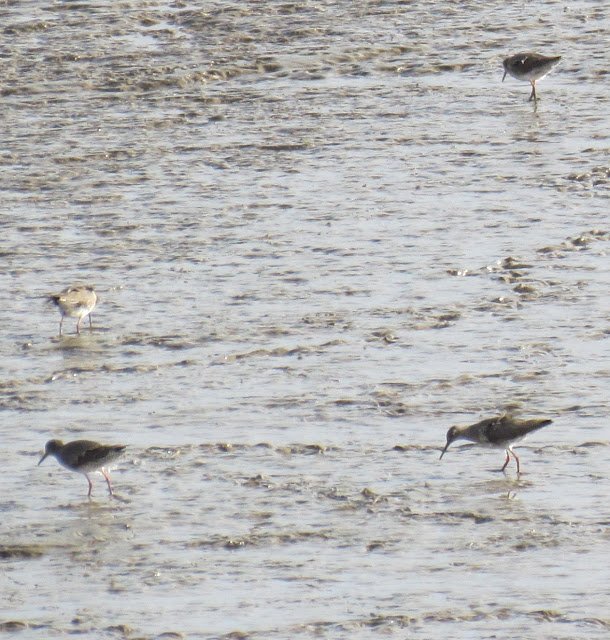 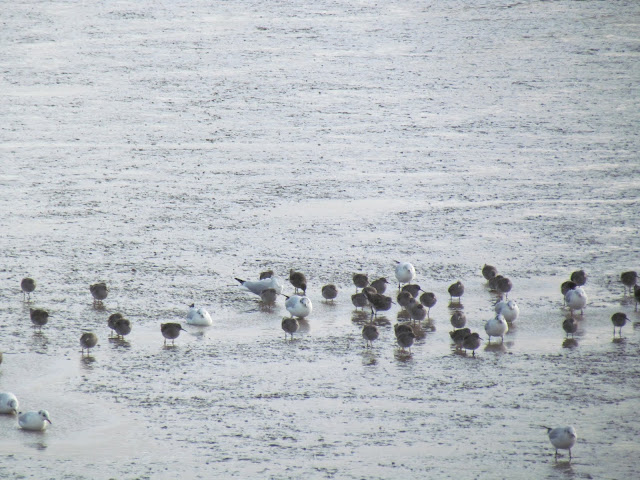 These are Common Gulls, (apparently not that common) and Common Sandpipers. (I think) 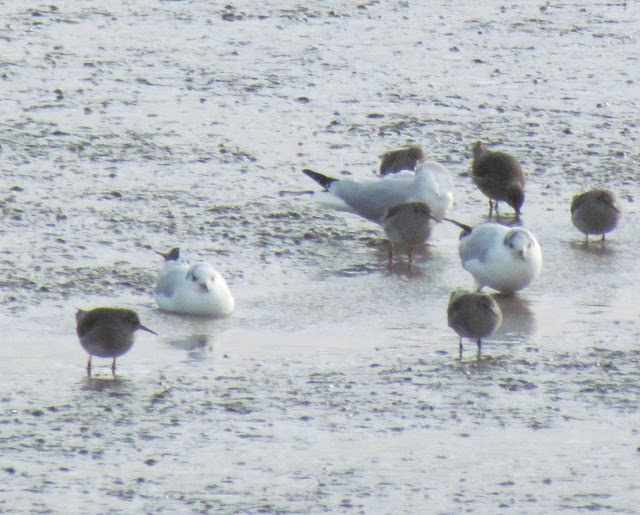 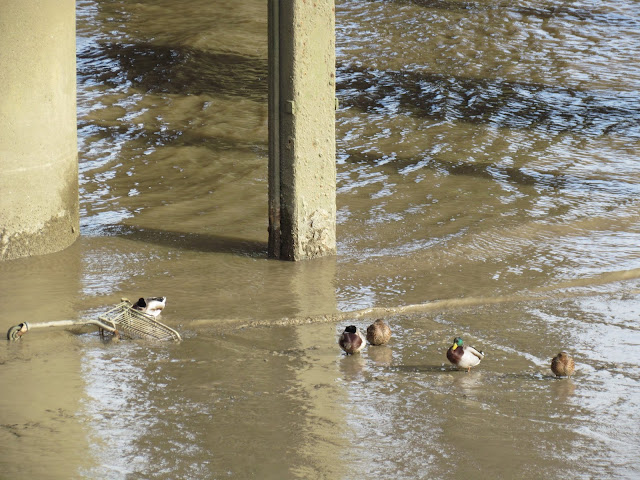 Some Mallards and a sunken shopping trolley. 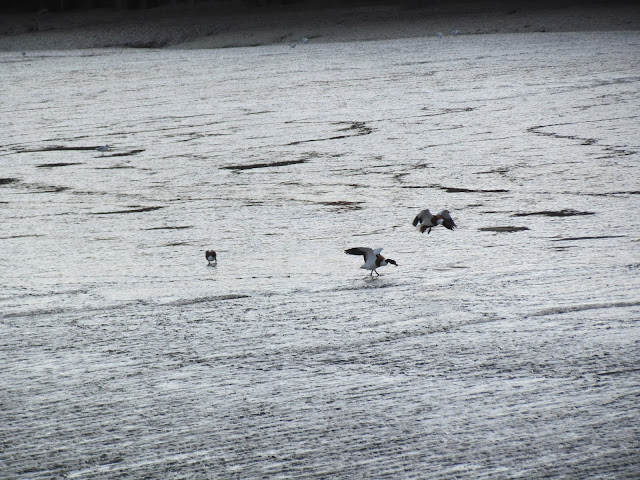 Shelducks, who were having a bit of a fight. I thought they were a type of geese when we were there as they are really big. Very beautiful colours. 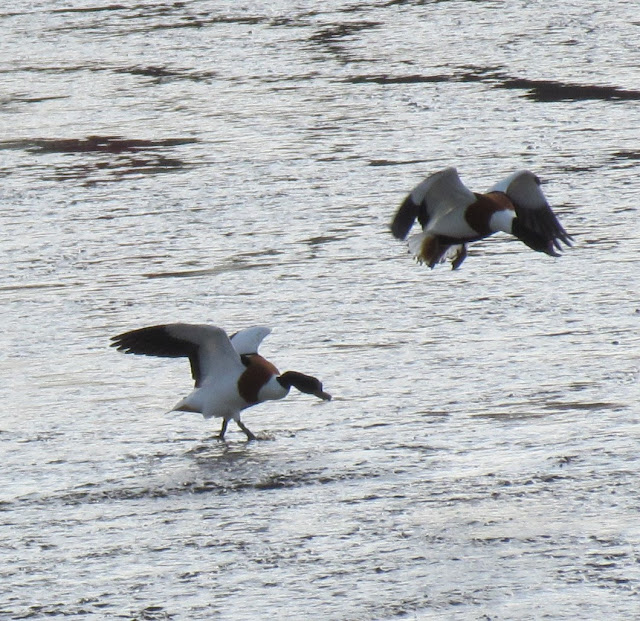 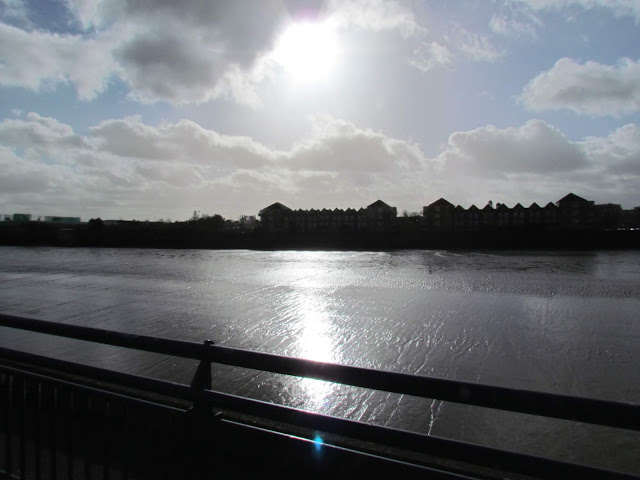 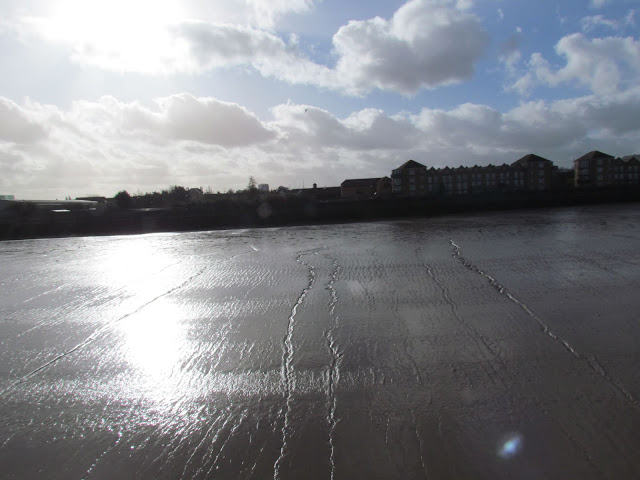 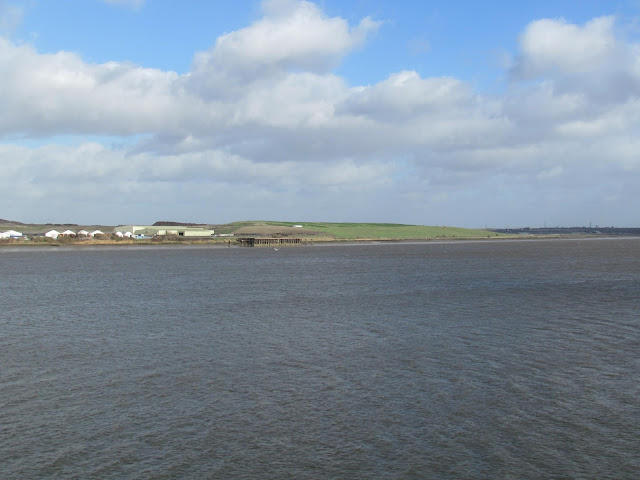 The view across the river to Rainham Marshes. 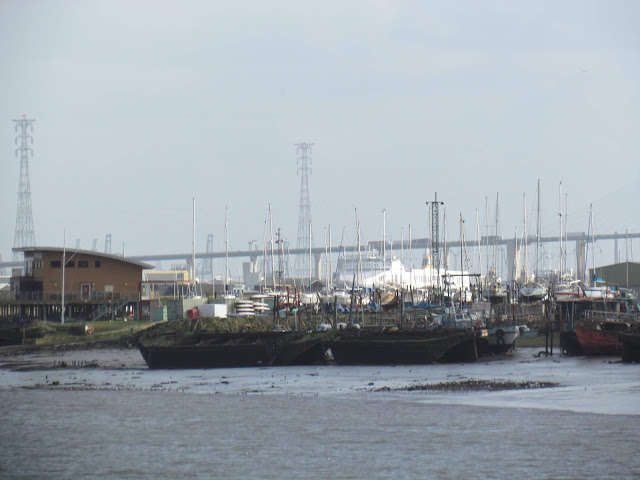 The Dartford crossing in the background. 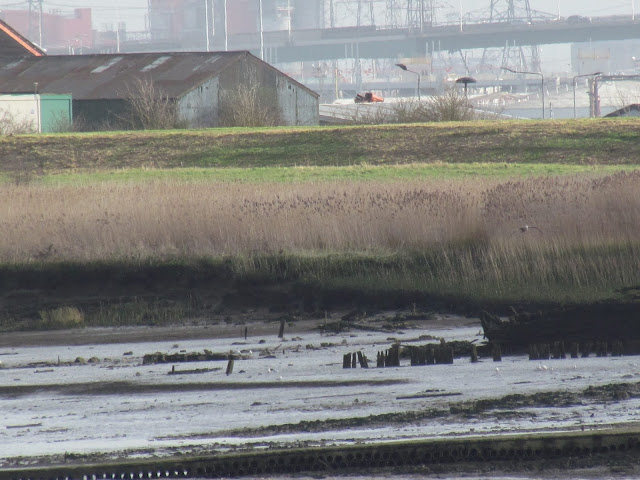 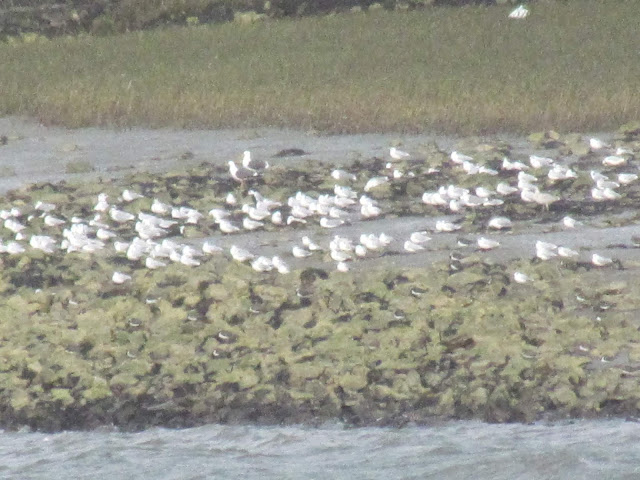 I couldn't make out these birds as they were right on the other side of the river. I can see two types of gull, and then some little waders. 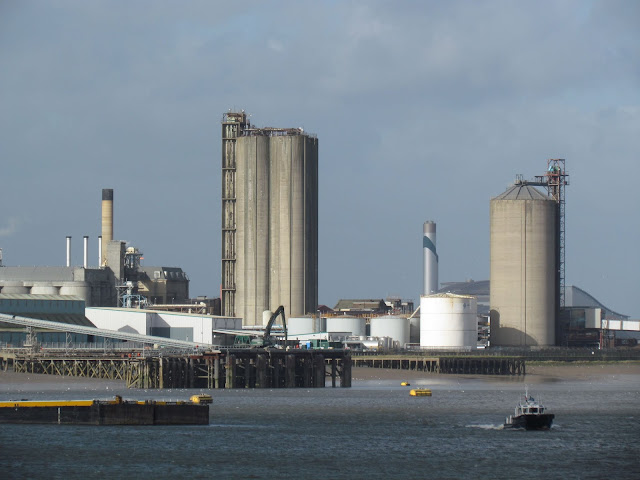 This is the ADM (Archer Daniels Midland Erith Ltd) oil refinery, which processes Rapeseed oil, and Linseed oil among other things. 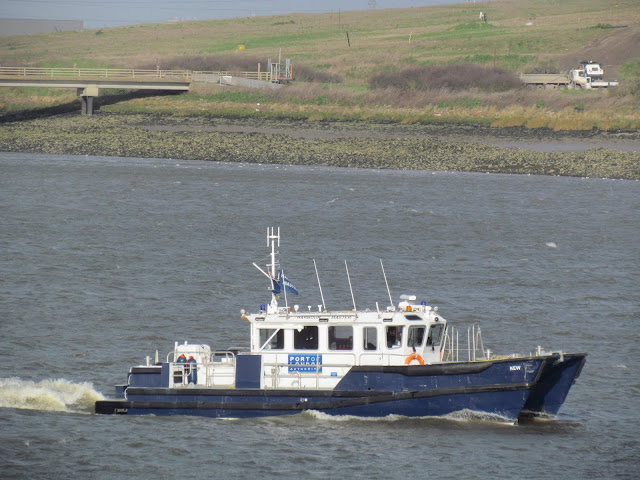 A Port of London boat speeding by. On the flag it says Harbour Master, so that's who he is!

I loved the huge sense of space you get on the pier. 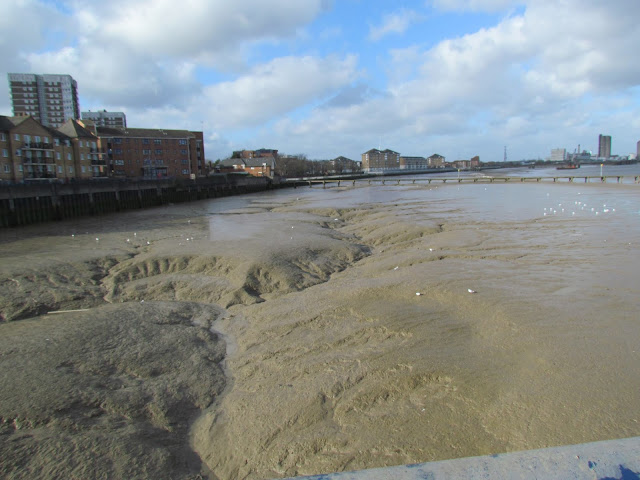 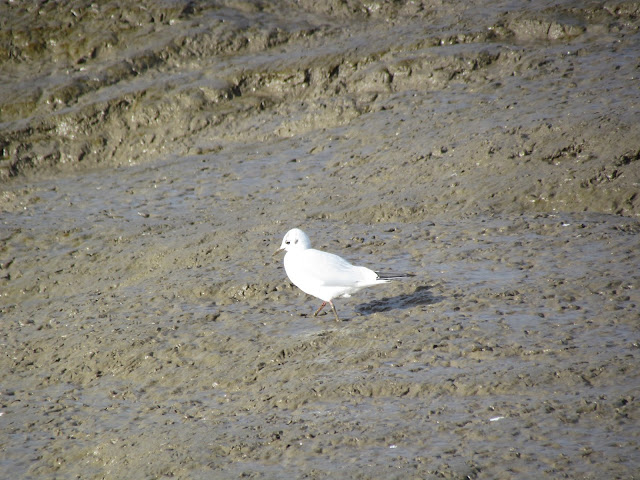 Look at this little bird's muddy legs and beak! 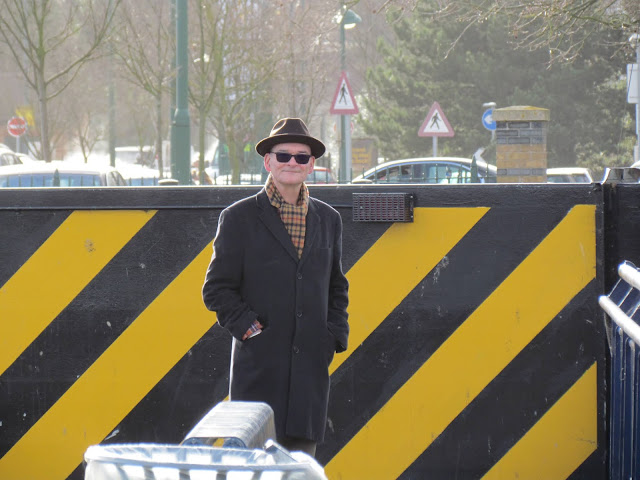 That is some treacherous-looking mud! It's interesting hearing about the ADM refinery and all the birds. All seabirds kind of look alike to me.