This is Business Bunny. He was made over the last two evenings when I suddenly had the need to needle felt. He has a little briefcase where he keeps his rabbit money, but is waiting for a basket of eggs to take to the Easter market. 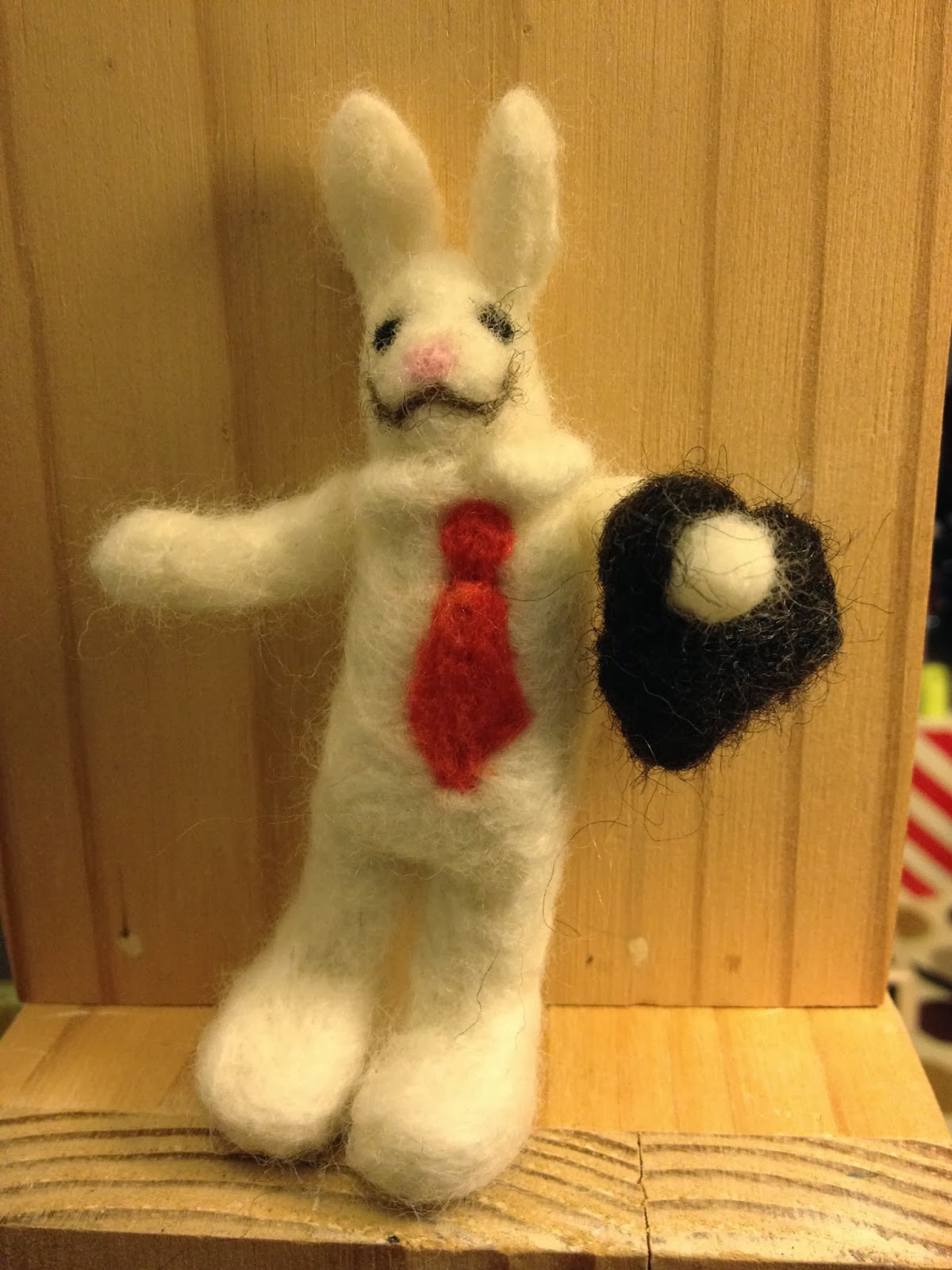 The advice is work related-but not in the recent way of work related posts on here, with which I am boring even myself! No, it is about a little visitor I have to the basket with the parachute in it which lives outside my classroom door. It is a little male tabby cat I am already thinking of as Tommy. (There is so much on the telly about the first world war at the moment that it just popped into my head-and of course Tom cat-I am so unoriginal!) He has been appearing since we went back to school. He seems to be sleeping in the basket (which has now had the parachute removed as it smelled of cat wee-but I put a blanket there for him instead) as he leaps out of it when I get to school and also has appeared before I have gone home at night. At first I thought he looked quite healthy, but on closer inspection looks very thin. Apparently he turned up in the day today, and John, the other teacher, said he had also seen him in the kids' tent. I bet you can guess what the advice is can't you? I am worried about him and basically want to bring him home. Obviously there are great difficulties in this with the girls and with actually making friends with him and persuading him to come home. I can't see it really happening but I don't know what to do for the best. I don't want to start feeding him so that he relies on me but am not sure how else I would entice him home. I might get the teachers of the older kids to ask their classes if anyone knows if he belongs to anyone. The nearest houses in both directions are not that far and I know male cats tend to roam, it is just the fact that he is sleeping there. Why would he do that if he had a lovely warm home to go to? Any ideas about how to proceed would be gratefully received!
Posted by Sarah at 14:19

I love Business Bunny, but can't offer any advice on the cat!!

How about contacting your local cat rescue centre.He may be microchipped.They would give you advice.

of course you must feed him, take him to the vet for a check up and immunizations, and bring him home ,if he does not get along there at least he will be well and healthy for some one to adopt him.It would probably only cost you a month's wage...just say the word and I can help- paypal some dosh to help defray the cost of well care for Tommy.

I think the microchip advice is very good and remember, toms especially unneutereds toms, are going to -- sorry -- cat about. Good luck, all
my cats were/are rescues.
Introducing an unneutered male to your other kits is risky, to say the least, if he's not up to date with shots, etc.
Tommy is a great name! Take care...

And I love the bunny! sorry, lol. I got caught up in the tomcat tale...

Love Business Bunny! Aww poor little kitty cat. If he's looking thin and sleeping in the basket I would DEFINITELY take him home for some care and love. Maybe after a bit more of a check around to see if anyone knows anything about him. Poor little cat! He needs a loving home! :-) Am I convincing you? Ros x