Hi! I don't know why but I just have not felt like blogging. I haven't looked at Instagram or Facebook much either. I continue to watch a lot of YouTube though! I have been reading a lot, sorting out more crap from the flat, having coffee with friends, helping my brother to move house, (exhausting!) taking my Dad, Joan and their dog Wilf over there to see his house, and taking stuff to the lock up. Also working, knitting doll socks, painting planets, (quite badly!) and I don't know what else. The doll socks are nearly on their way. I am going to spend some time this weekend catching up on what has been happening here, and then I will feel connected again! In the meanwhile, here are a few random pictures from the last while. 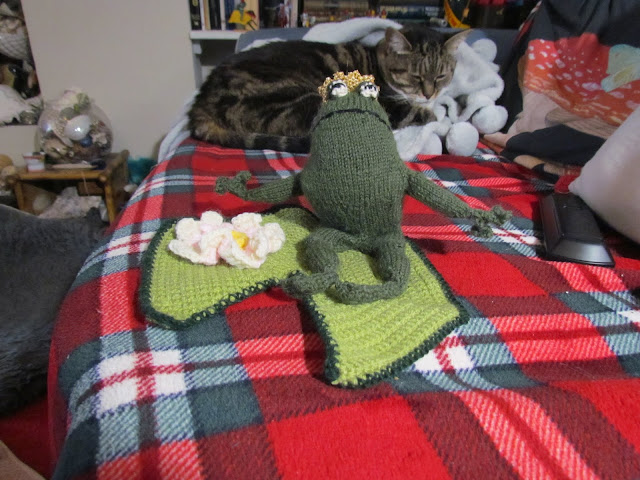 Cassie and the Frog Prince, who finally went to live with Joan and Dad. He was glad to get out of the bag I have kept him in for months! 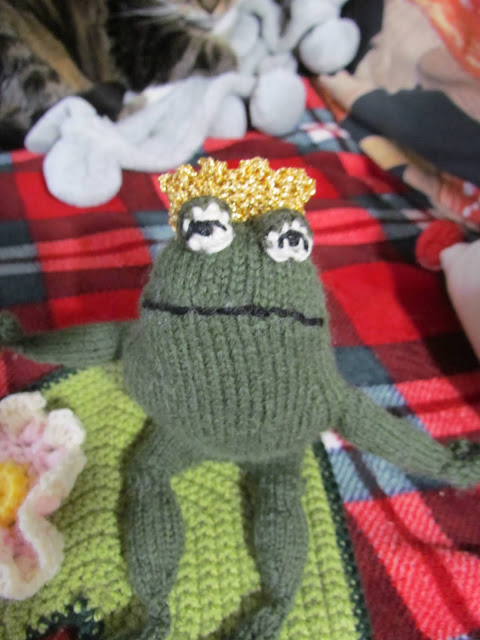 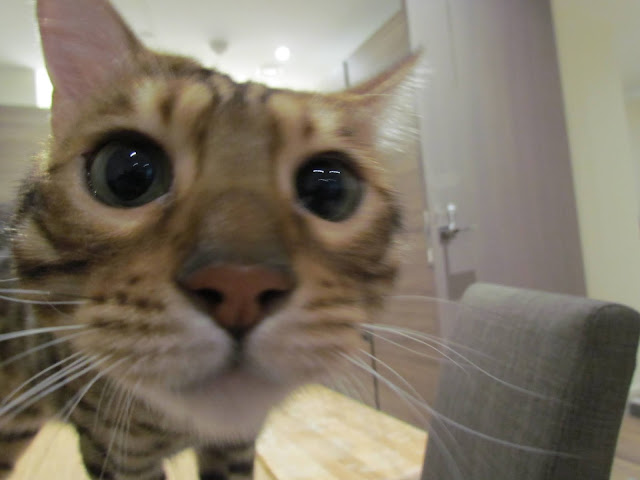 You know who, looking his cutest! 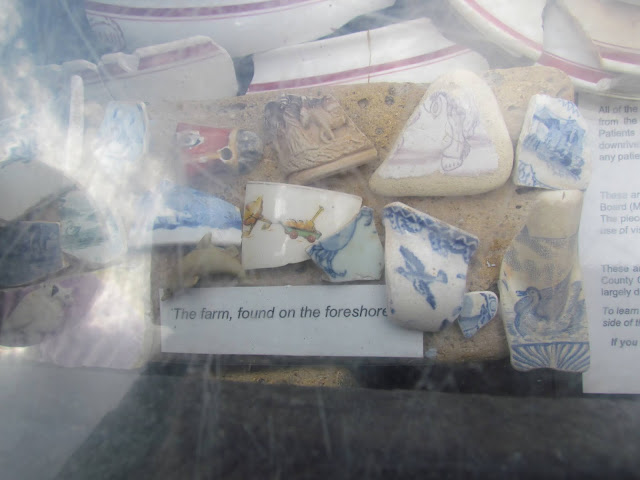 Part of a display of mudlarked china outside the farm in Rotherhithe near the shore. 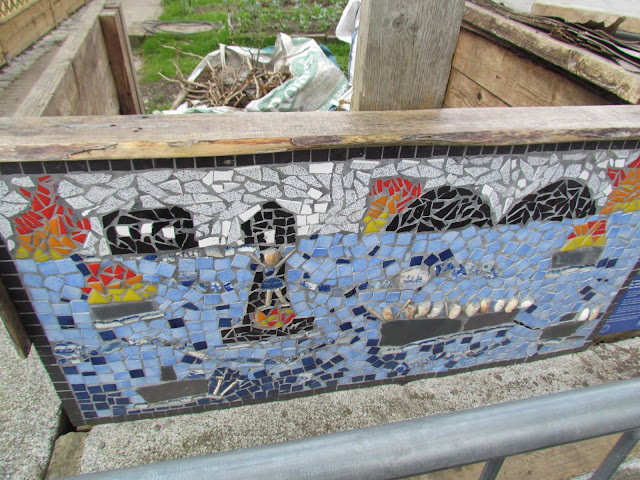 A mosaic there which includes some pipe bowls and stems. 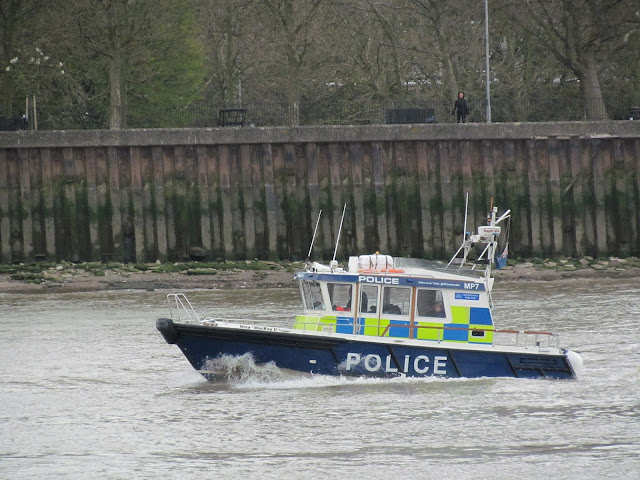 A police boat on the river. The last time I went mudlarking at Greenwich quite early in the morning, one went speeding along with its siren blaring. I am not sure why that was necessary as there seemed to be no other river traffic! 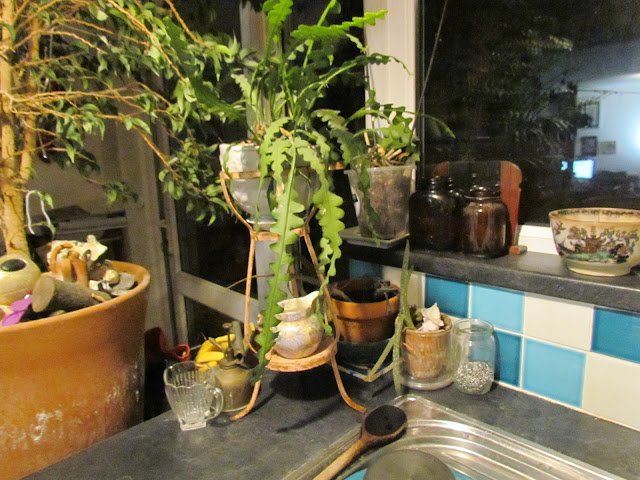 One of the newly cleared and cleaned areas. I have had the bowl on the right for a very long time. I think it was one of my first second hand purchases in Leicester when I lived there. I went to Polytechnic there, worked, then went to university there to do my teaching. I think I lived there for ten years in all. I really liked living there. The bowl is all cracked and damaged, but holds together. I feel that it is really old, and it is one of those things I take for granted, then notice it anew every so often. So I gave it a starring role on the windowsill for a while! 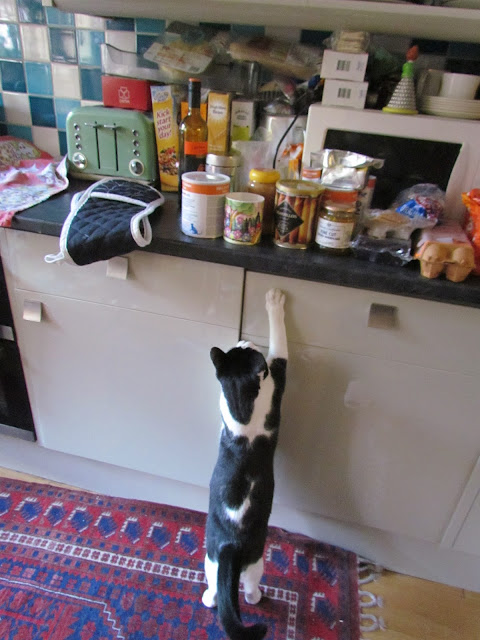 One of the not newly tidied areas. What a mess! Bolly knows his treats are up here, and he does this cute thing where he moves his paws like he is doing a fast doggy paddle on the fridge door. We don't always give in but it is hard not to. It is what he used to do when he wanted to come in, before he was allowed. 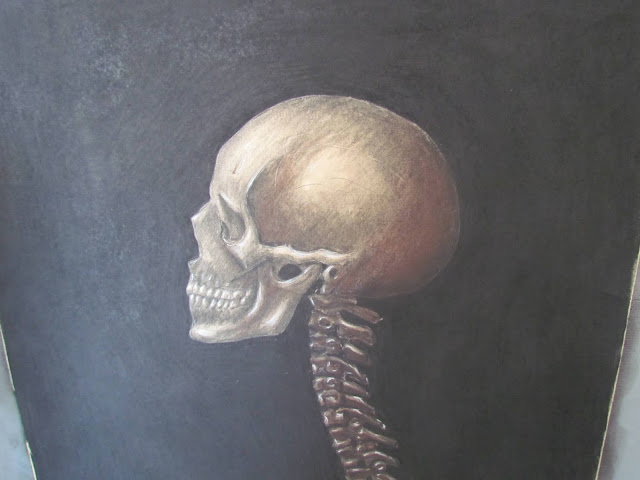 At my brother's, he had all his recent carvings out and some of the large charcoal drawings he did when his carving tools were not available, due to imminent moving. All brilliant. He has done a series of skulls and partial skeletons. He is very good at carving and could probably make a fortune if he sold more of his work! 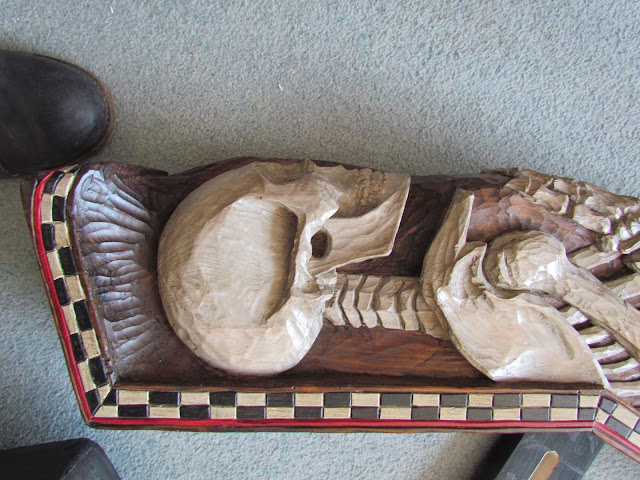 This carving is part of a huge table in parts that he made. Below is a drawing of another carving which has the skull at the top and a chain hanging below. All from one piece of wood that curves around it. I didn't take a picture so can't show you. He said that as he carved the chain, it got longer and it was touch and go whether it would fit in the space allotted. I love things like that when making things, the problems that occur that you didn't foresee and what you learn from those. 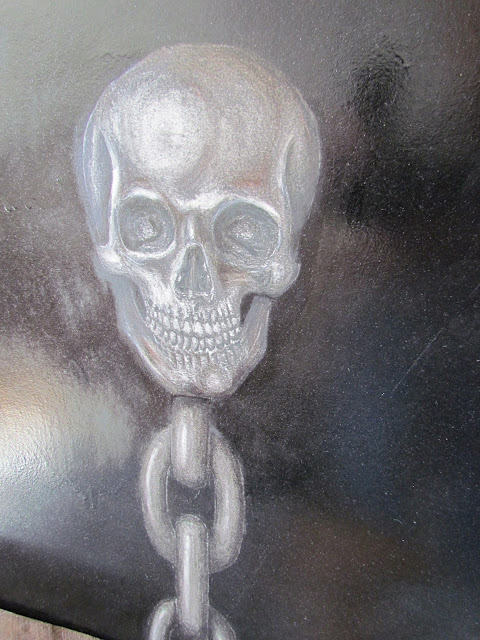 He one looks quite jolly! 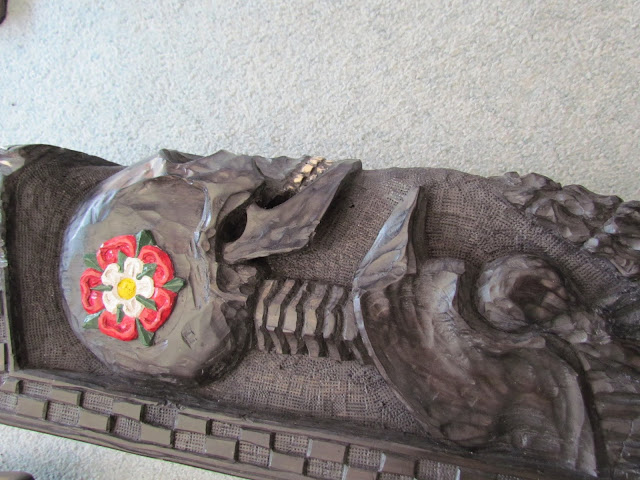 Antony's work just boggles the mind, how can he be so good at what he does and not be famous. He is a master!
Knitting tiny socks has got to be tedious!
Do you use toothpicks as knitting needles?
Good to see you here, missed you! Xx

I love those carvings! They're amazing. Love the Frog Prince too.

SARAH! So glad to see you!
I understand not wanting to blog, and you sound good and busy,
but I missed your posts.

I want to see photos of all the things you love in your house,
like the Leicester bowl.
Congrats on clearing the sink space---that area always seems to attract clutter in my life.

I know a guy who carves fishing lures-beautiful wooden fish--and he has retired from his job now to do it full time, he makes so much money at it.
Fishers use them, so I suppose that's different--a built-in market--but still, they're willing to pay big bucks because they're beautiful, which doesn't actually catch more fish... And people who DON'T fish buy them too.
(Just agreeing here your brother could probably make a living with his intricate art, if he wanted to.)

The expression on the Frog Prince's face is just great. So funny. Sort of wry?
Anyway, very appealing--Joan is lucky to have these froggies you make her (I remember a pillow, was it? last year.)

Ollie reaching up --cracks me up.
Is Eddie still hanging around?
And the cat-sitting kitty is beautiful.

I gave my friend bink the book about Mudlarking you'd mentioned in a post, and she said it's hard because she experiences such pangs of envy while reading it.
The pipes & bowls in the mosaic is such a cool touch.

P.S. I just realized... you didn't post a doll of any kind!
Are they having a conference among themselves somewhere. "We cannot be in pictures today."

Love the carvings! Wow! And those china chips from the mudlarkers -- those are particularly nice examples.

Your brother has such talent! I can see why he wants to carve bones, they are very interesting and quite subtle. I have a cousin who is an archaeologist specialising in them and she is endlessly fascinated by what you can learn.