The saga of Oliver and his new friend continues. He comes round every day to scavenge whatever food he can find, and although we are not encouraging him, we are not chasing him away either as he is Oliver's friend. If we see him come in we go over to the kitchen and he goes out, but he usually comes late at night or early in the morning, and unless we shut the flap then we can't stop him. I presume he goes back to his house in the daytime to sleep and eat there. There is not usually much food left lying around, just biscuits, so he is not eating much. Often one cat will appear before the other one, which implies that they are going around the area together. It is so strange! They do have little spats, but it is not serious fighting, more like play fighting and chasing each other. Cassie has not reacted to him in the way she did to Oliver. She just looks at him and he ignores her. Lily has seen him a couple of times, but doesn't seem interested. Andy has called him Eddie. He pretends to be Oliver saying, in a deep northern accent, "This is me son Eddie. He's alright." 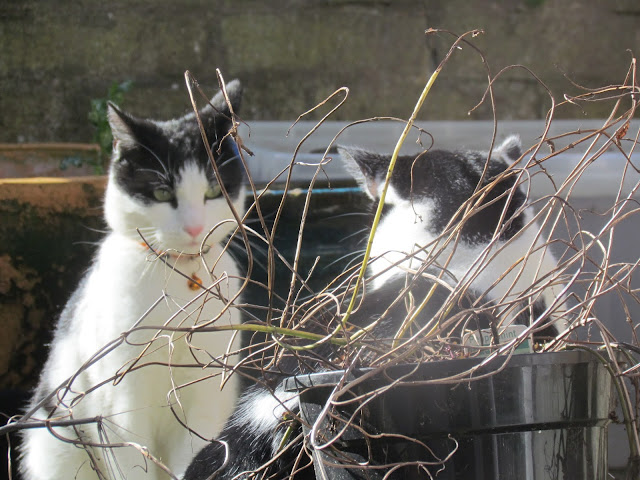 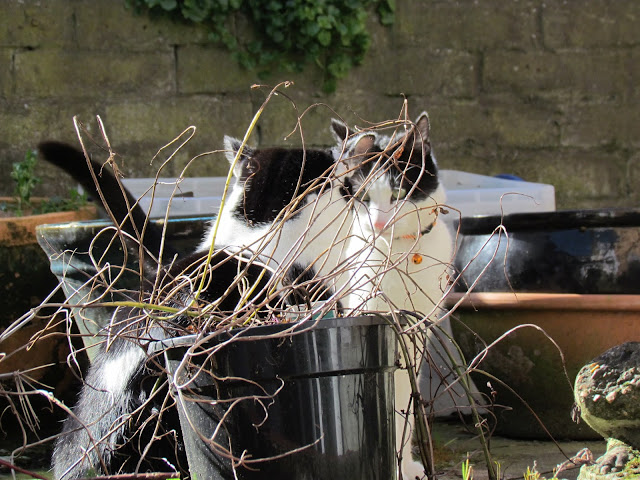 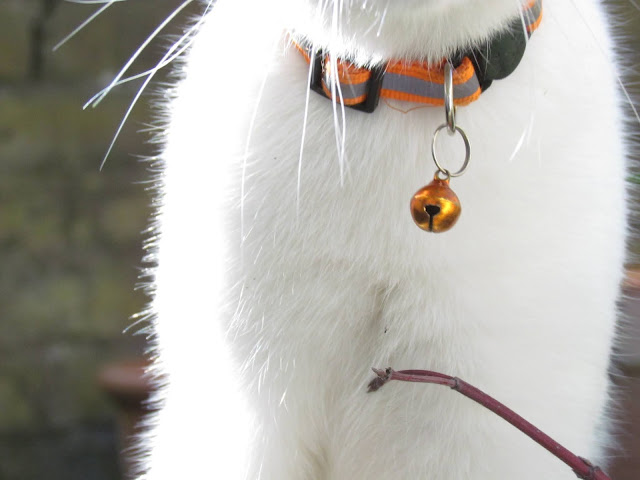 He is a cutie! 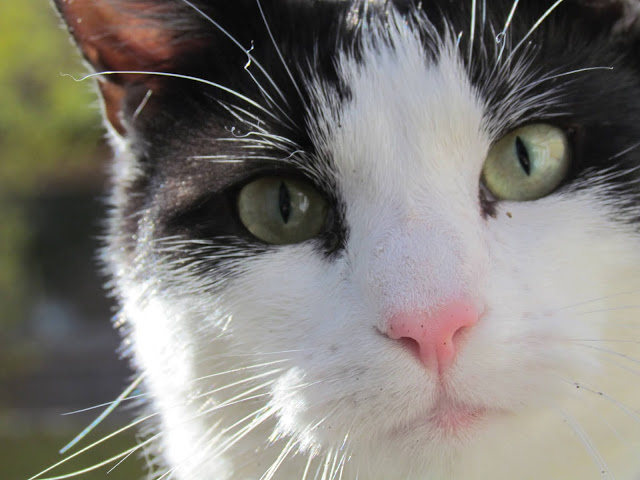 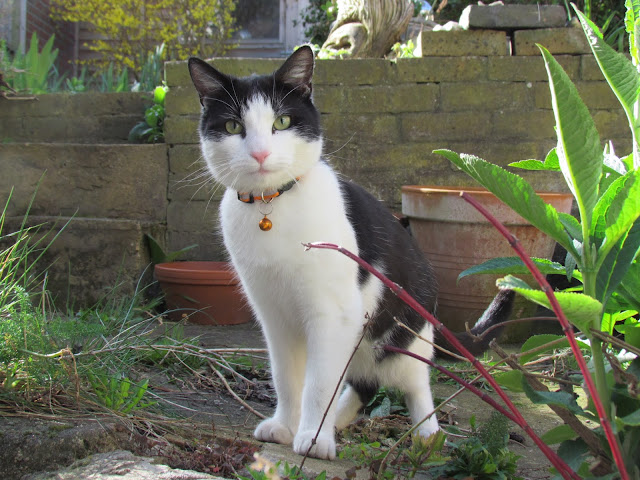 Here is Cassie taking advantage of a sunny spot by the sink. 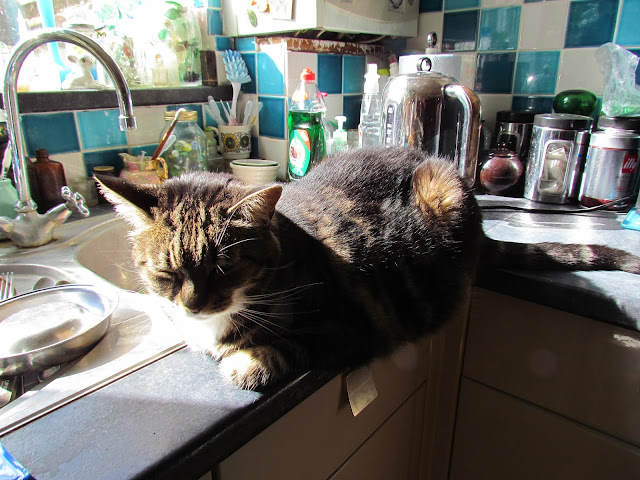 And Lily fast asleep on a blanket I found in a skip in Northumberland years ago. 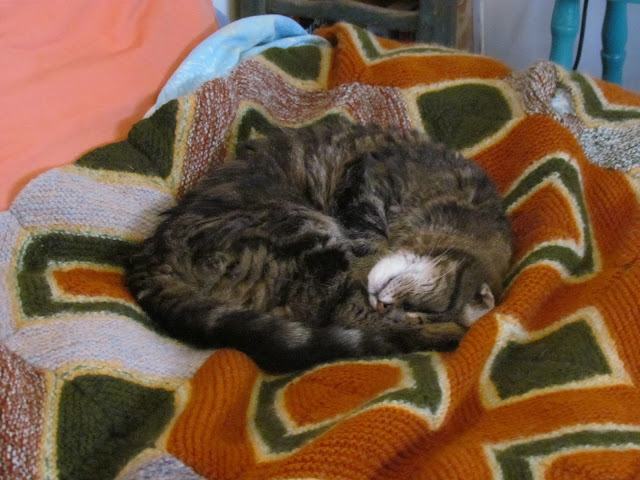 And last of all, this is Ollie mesmerised by the screen saver on Andy's portable DVD player. He sat there for ages moving his head round watching it bounce from edge to edge, occasionally trying to touch it with his paw! 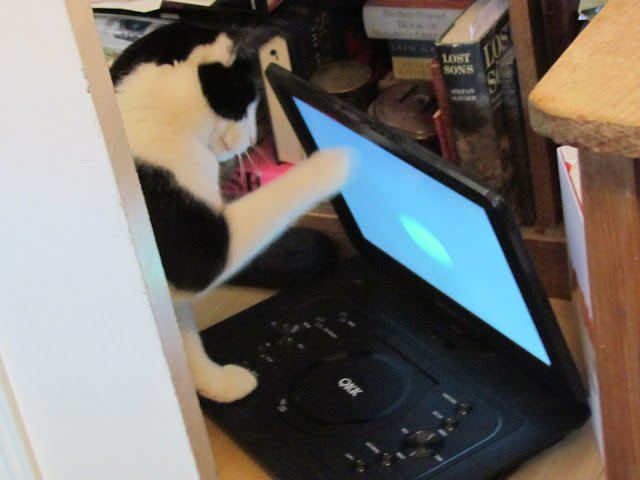 Oh my catness! They are all so endearing. Your house clearly has the mark of cat friendly attraction. Ours is marked for raccoons and plastic orphans...Yours bears more responsibility. Eddie is indeed alright, just looks part of the family. Lily unconcerned because - why bother as long as there is a warm blanket to snooze on and enough kibble in the bowl. You could tie a note onto Eddie's collar for his humans to learn where he hangs out during his hours of not being home. His humans could in turn send a reply.

What a face! I love your Northumberland blanket, too. Bravo to you for rescuing it! Funny how some cats respond to screens and some don't. My cats would never pay attention to anything on the TV or the computer -- in fact I always doubted whether they could even see the screens. But a friend's cat used to paw at birds on the screen all the time!

Happy Easter to all of you!

Pretty kitties :)
That skip blanket was a fabulous find.
None of my cats ever jumped up to the kitchen benches, it's the one place in my home where I won't find cat hair.

Cats are such fun. I had to send ours to a new home (my parents found one in Berkshire, deep in the country) because one of my daughters is so allergic. We've never got one since because she would not be able to visit if we did. When we visited the cats in their new home they did recognise us but didn't seem that keen to follow us around, I think they were enjoying country life too much and were afraid we might take tehm back to the city!!