Last week was my birthday. The first one without my Mum which made me sad, but I had things to make me smile too, such as this cat card from Ollie, and Mouse Girl from Linda Sue. 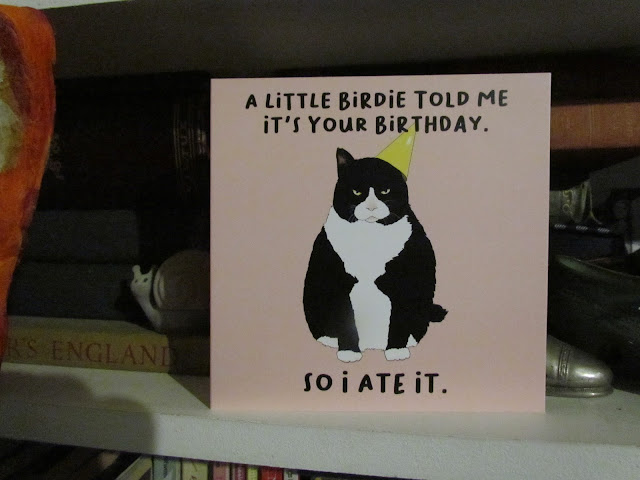 Here is MG, watching television with Oliver. They like programmes with moving things in, which can be from nature or not, doesn't matter as long as they move. 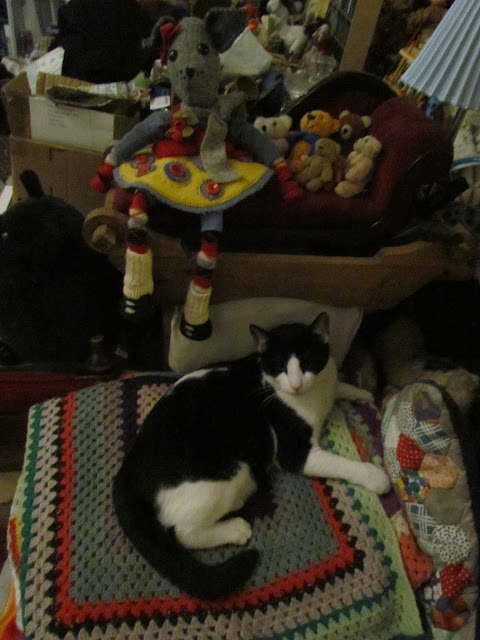 The girlettes have been suitably clothed for Halloween. Here, they are choosing the fabric for their costumes. They each had very different ideas about what a Halloween costume should be, but all like the colour orange so that is good. 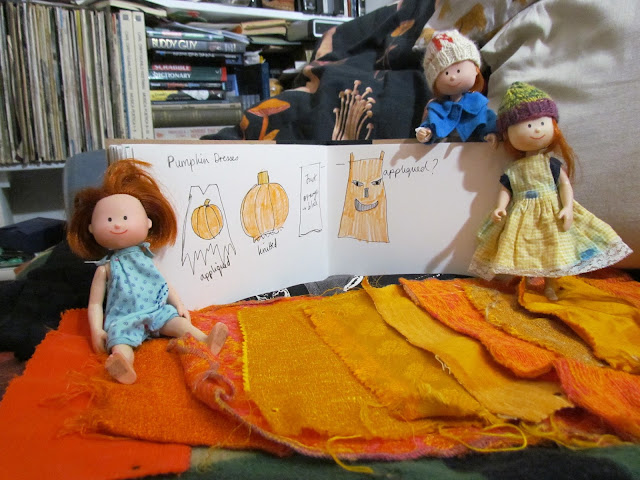 Since finishing Mum's house, I have embarked on another long and exhausting task-that of clearing this flat so that we can decorate, do the floor in the kitchen and sitting room, and possibly move. Since our electrical troubles last year, it has never been quite back to normal, and with the addition of the things I brought home from Mum's, I had lost all hope of ever getting it there. My brother came up with a storage place that is quite cheap, if I don't count the petrol it takes to get me there, (and once all the stuff I want to move is there then I won't have to go there for a while), so I have been clearing, sorting and moving stuff out. At first I couldn't see any difference, but I am beginning to now. I have been taking pictures along the way and it looks like one of those places on the hoarder programmes. I will share before and after pictures when I have finished. If I ever do. At the moment it seems a long way off. Anyway, the long ramble is to explain about the Polish wooden dolls below. This is my collection of them, and they were packed away in what I thought was a moth proof bag. It wasn't and a few of them had suffered quite dramatic hair loss. Fortuitously, I found some doll hair mohair I have had for a very long time, just as I found the bald dolls, so have attempted to give them hair again. Not sure how successfully but I tried! 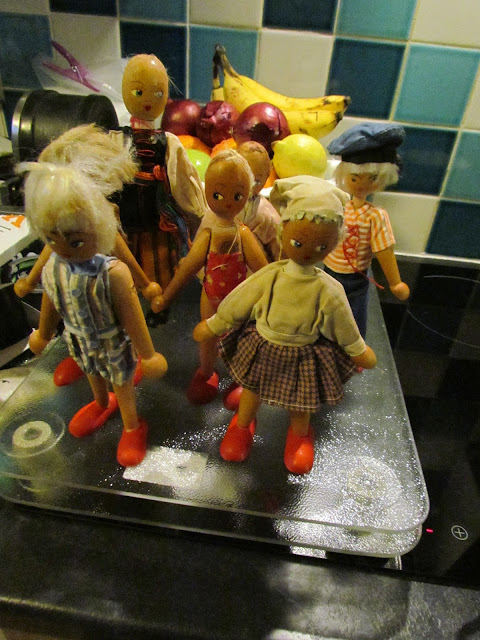 This is obviously the before picture, and there is no after picture yet.
Posted by Sarah at 15:45

Most ambitious project, Deciding what to take to storage is also quite a challenge! NOT the bears! NOT the cats and NOT MG! I rather like the little Polish dolls bald, They look like skittles. Anyway, good for you- so much work ahead! I hope that your little house is still cozy. Kind of a rough Birthday for you without your Mum , in the middle of the pandemic and not a lot of joy out there in the world! I ate a chocolate cupcake in your honor and sang to you , very off key!

You could dress the Polish dolls in hats and scarves while you work out the new hair.
I've thought about dressing my girlette for Halloween, but since we don't really do Halloween in Australia I haven't quite made up my mind. Probably I won't.
Sorting and clearing is a huge task, I do it every time I move house.

I love that card. It's funny how some cats pay attention to movement on the television and some don't -- when I had cats they never seemed to see what was on the screen. Good luck on the clearing! I can't wait to see your before and after shots. The wooden dolls look kind of cool with bald heads, I think!

Happy Birthday, Sarah!
I hope your next year is much better than this one has been...
A birthday for the first time without a mother is a sadness.
I'm glad other things brought smiles.

I lovethe cat that ate the [canary] card--and all the tiny bears watching TV with Mouse Girl.
Did Linda Sue make MG? Very wonderful. I especially like her disc skirt.

Madeline herself has such a pretty dress--she looks quite right.
I'm excited to see what your girlettes' Halloween costumes will be!
Penny Cooper here has been wearing her witches hat nonstop for two weeks, even to bed.

I haven't had any oomph to play with the girlettes here,
but they say,
"Go away, we are busy. We're dreaming."
They sleep more in October, as the darkness comes on, so I suppose that's it.

Good luck with the clearing out. That's a massive task. I imagine it will be very satisfying when done (or "done enough").

XO Fresca and the Orphan Reds

Maybe doll number three will stay bald and just have a hat. No bears are going to storage, and certainly not Mouse Girl. Some dolls will have too as I have too many to keep here and do all the jobs.

Happy Birthday, Sarah. I know it was hard without your mom, remember she is always with you.