I have made gift tags. I started cards ages ago but don't like most of them so have given up and bought some RSPCA ones. Tags are much easier and quicker. These involved my glue gun and glitter so all the better! 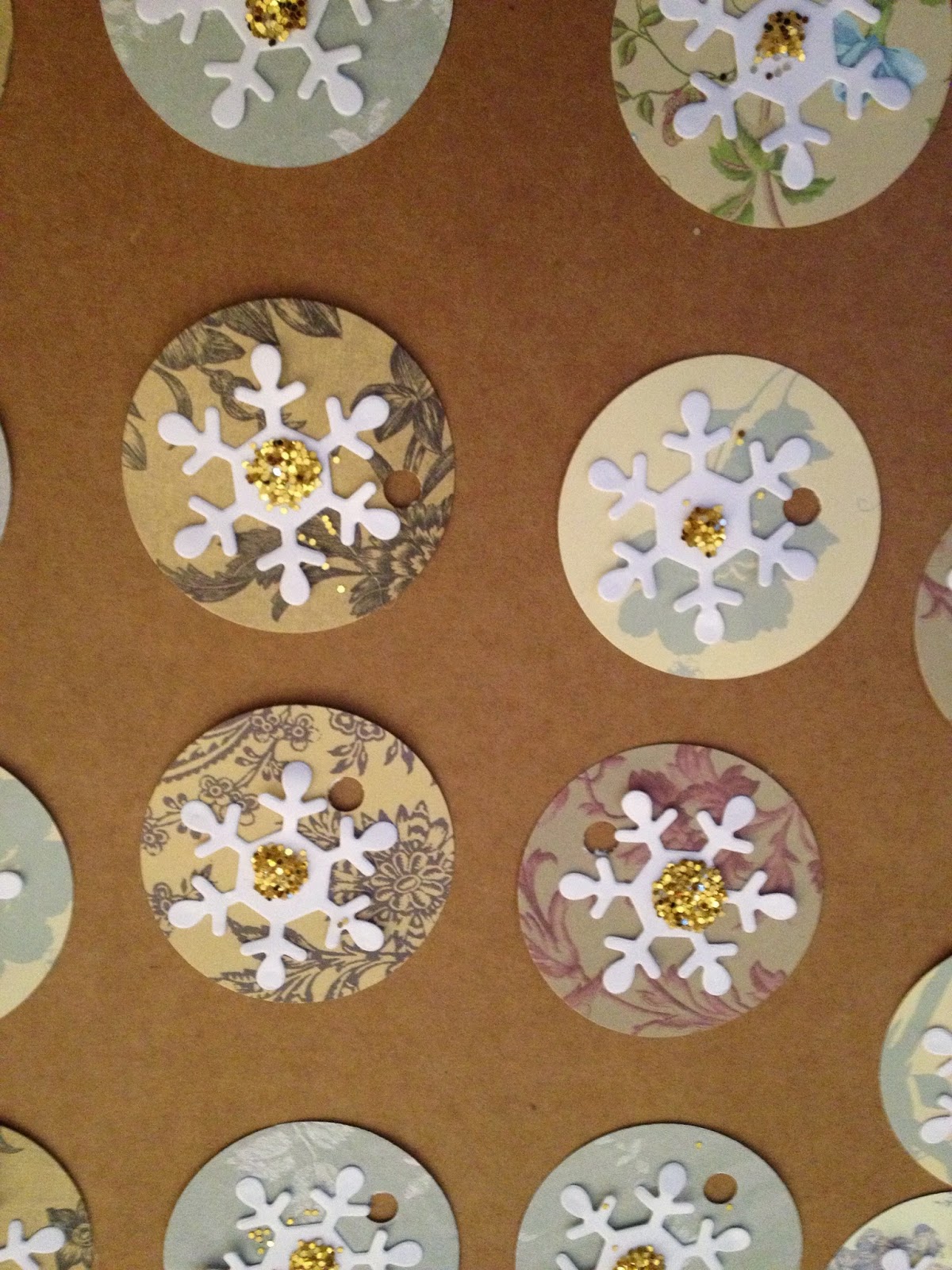 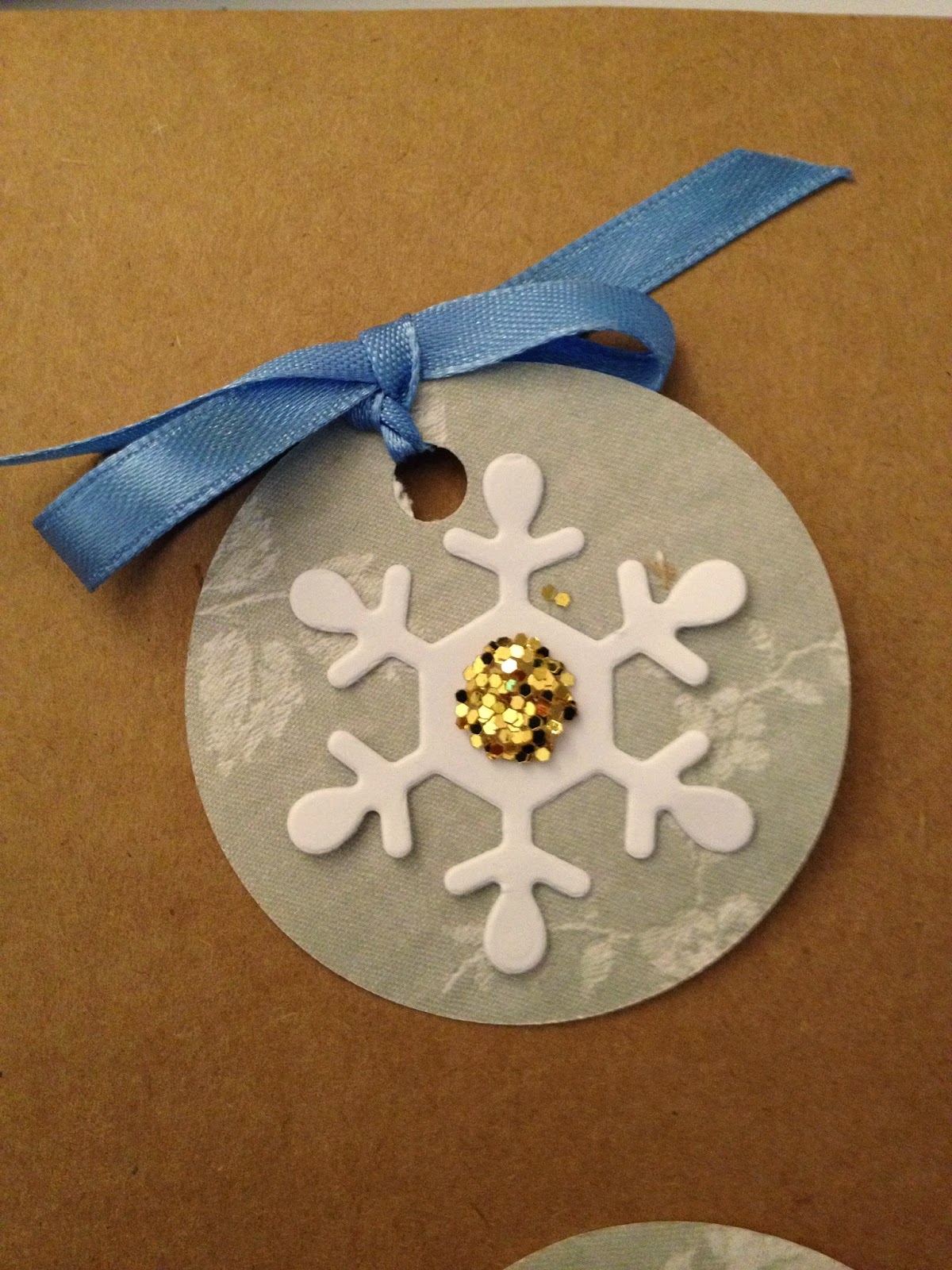 We went for a walk in the park on Sunday. Paddington Bear was there. 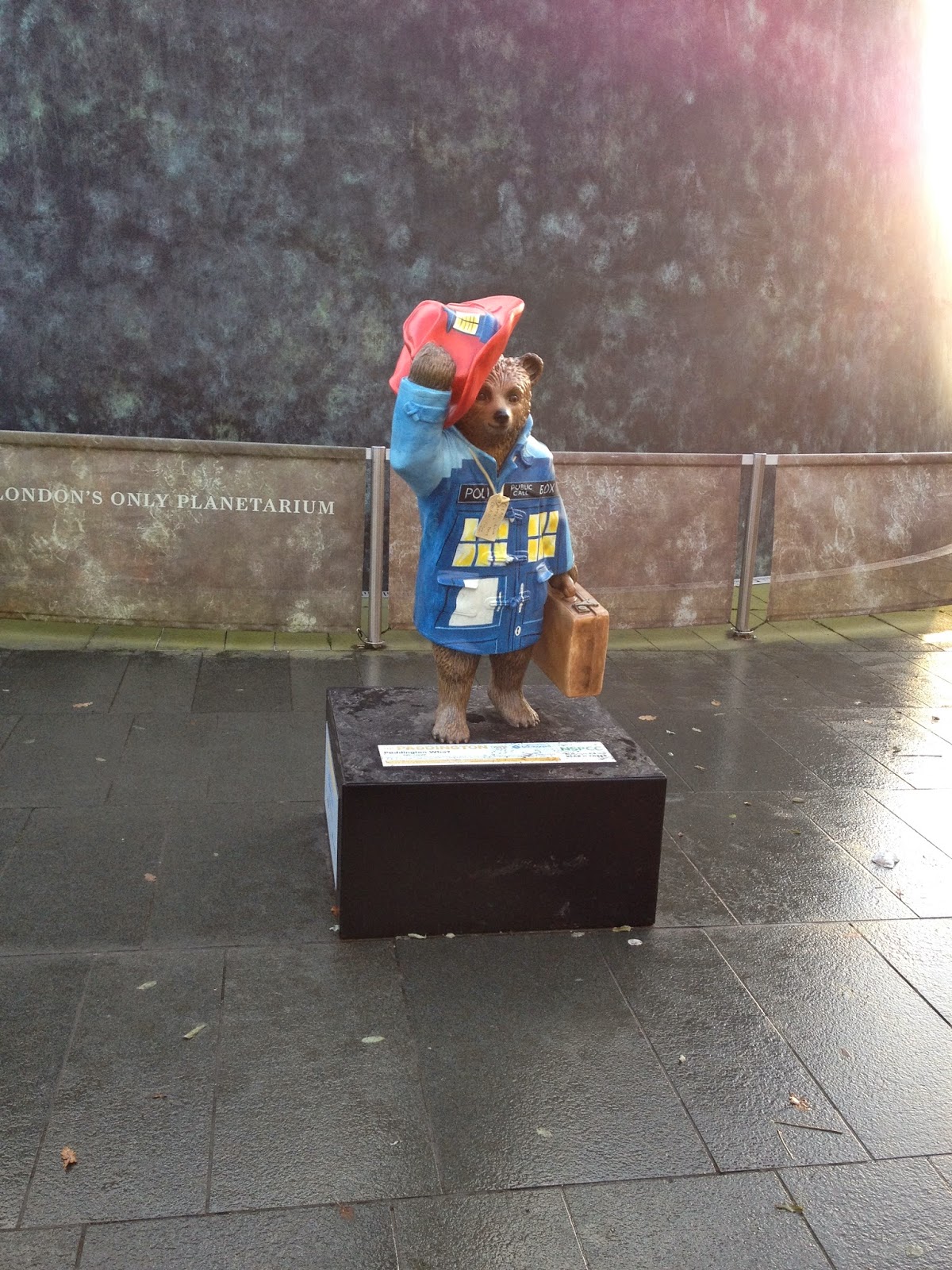 I sat on a tree to drink coffee. This is one of the Spanish Chestnut trees in Greenwich park. Isn't it impressive? It made a very comfy seat too. We watched a mad little Jack Russell running around every tree chasing squirrels. There were also lots of the green parakeets chatting away. 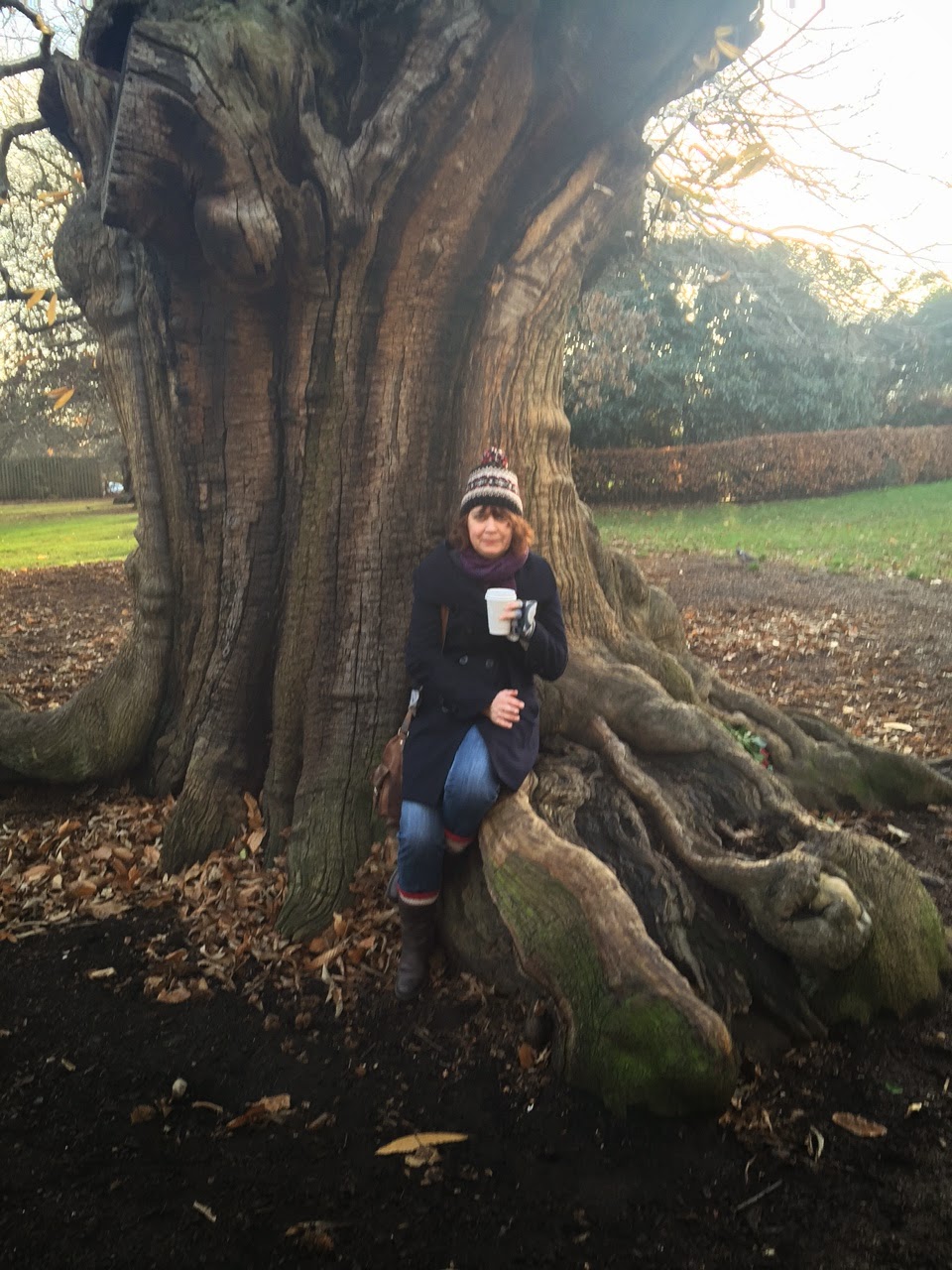 I decorated another tree. This one is by Malcolm, Anne's husband which he very generously gave us when we visited in the summer. Isn't it lovely? He has a big collection of very well organised driftwood, with which he makes the trees. The tiny tree is from Tesco and is already glittered. It is keeping well. In front of the tree is the ugly Nativity. They are from the Oxfam shop in Rochester some time this year and I couldn't resist. They are papier mache and very lightweight. Lily keeps lying up here so they are in more of a regimented line than I put them in as she lies against them and pushes them back. 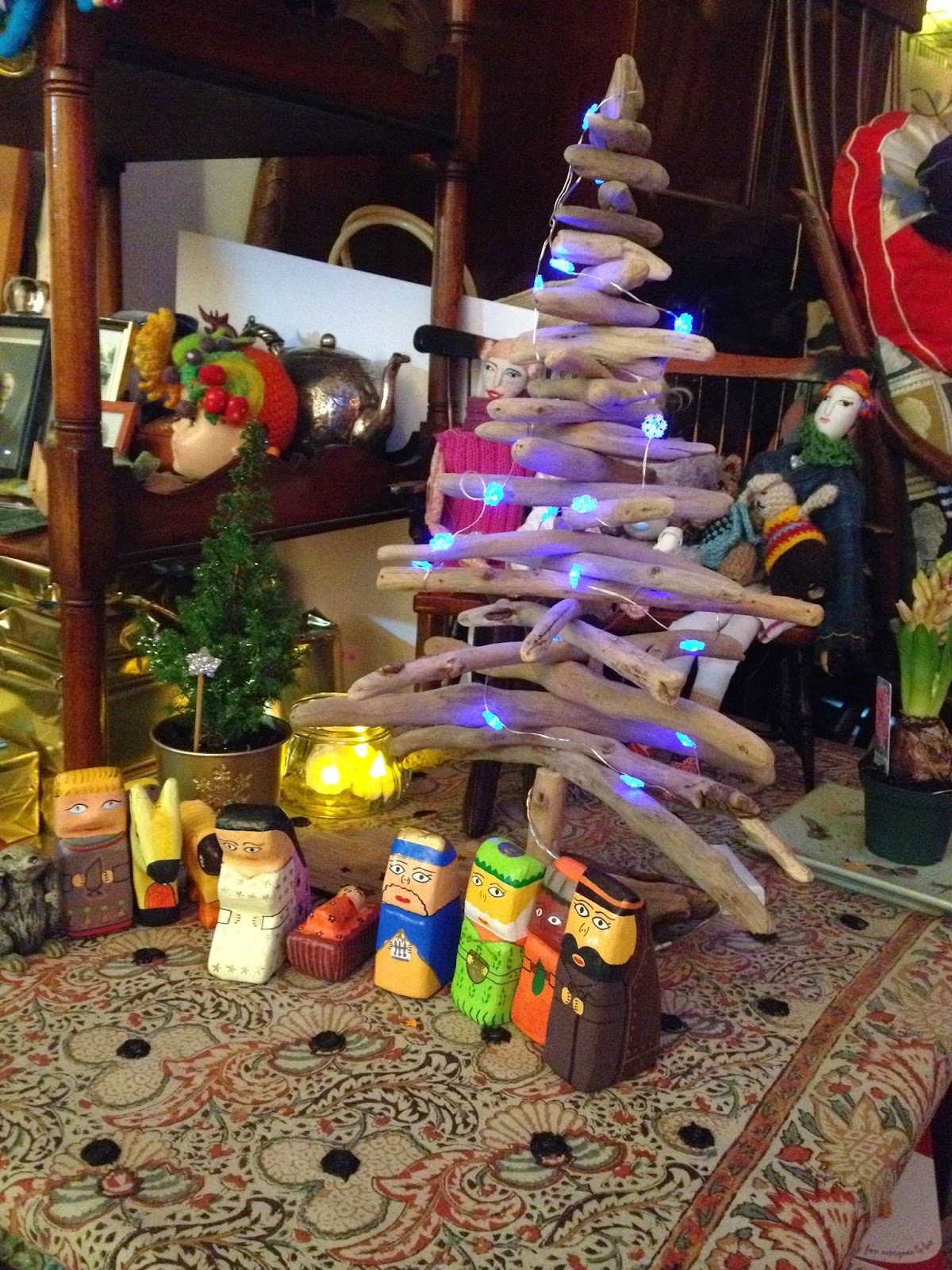 I made a hat for this felt face. I didn't make the face. He is from Etsy a long time ago. I wish I could make such good faces! 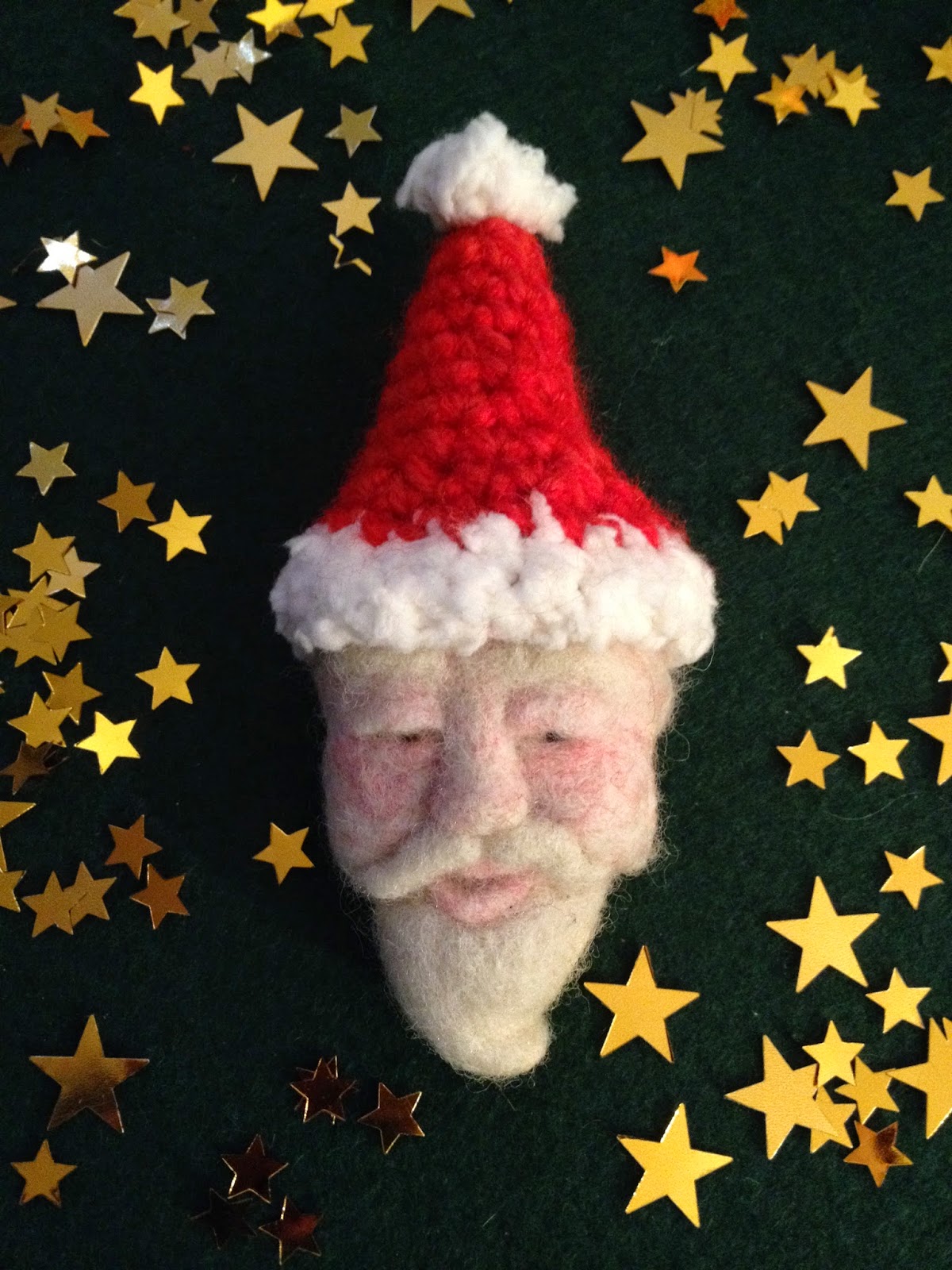 I stole this gift tag idea from Pinterest. You use a coke can pull for the belt. Great idea! I made the little stockings, sewing them by hand as my sewing machine has stopped working. The curtain seems to have finished it off. After a very frustrating couple of hours on two evenings trying to sort it out I gave up. I might have to get a new one. I should look into fixing it I suppose but that may be expensive and it was a cheap machine. The stockings are for my friend in Holland's children. I put in silly little things from the Museum of Childhood gift shop. 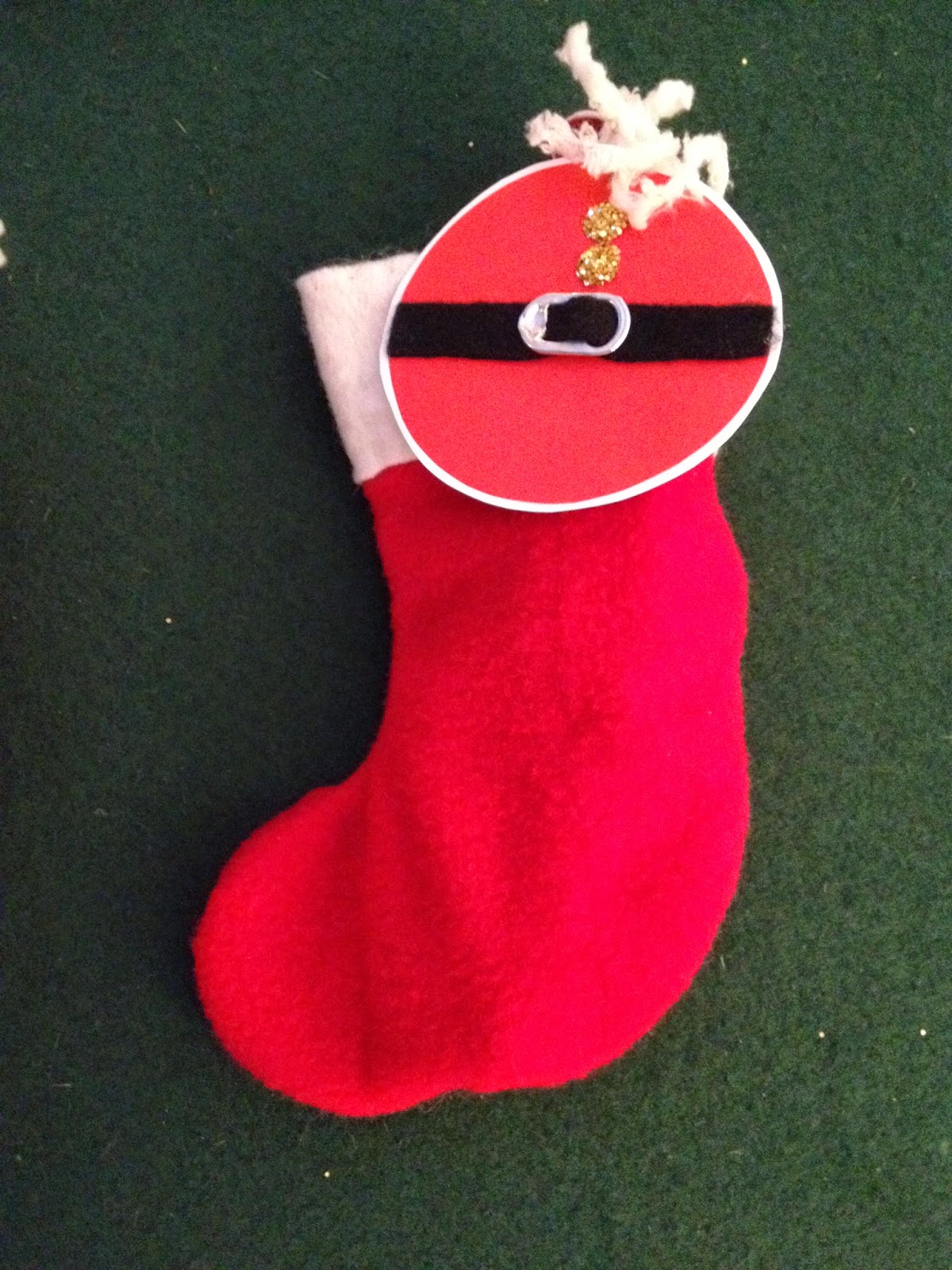 Yesterday I was lucky enough to go to the theatre! I was working in New Cross in the school I have been at for a few weeks, and the class I had was going to see Bear Hunt at The Albany in Deptford. It was nice of them to take me. The teacher was in, so technically they didn't have to. We had a very pleasant walk there and back, and the show was great. It was puppets and four actors/singers/musicians. The puppets were the kind where you can see the actor operating it, sometimes two of them as they needed extra hands to do the feet.  They were very expressive and with fairly simple props and stage sets it was very well done. 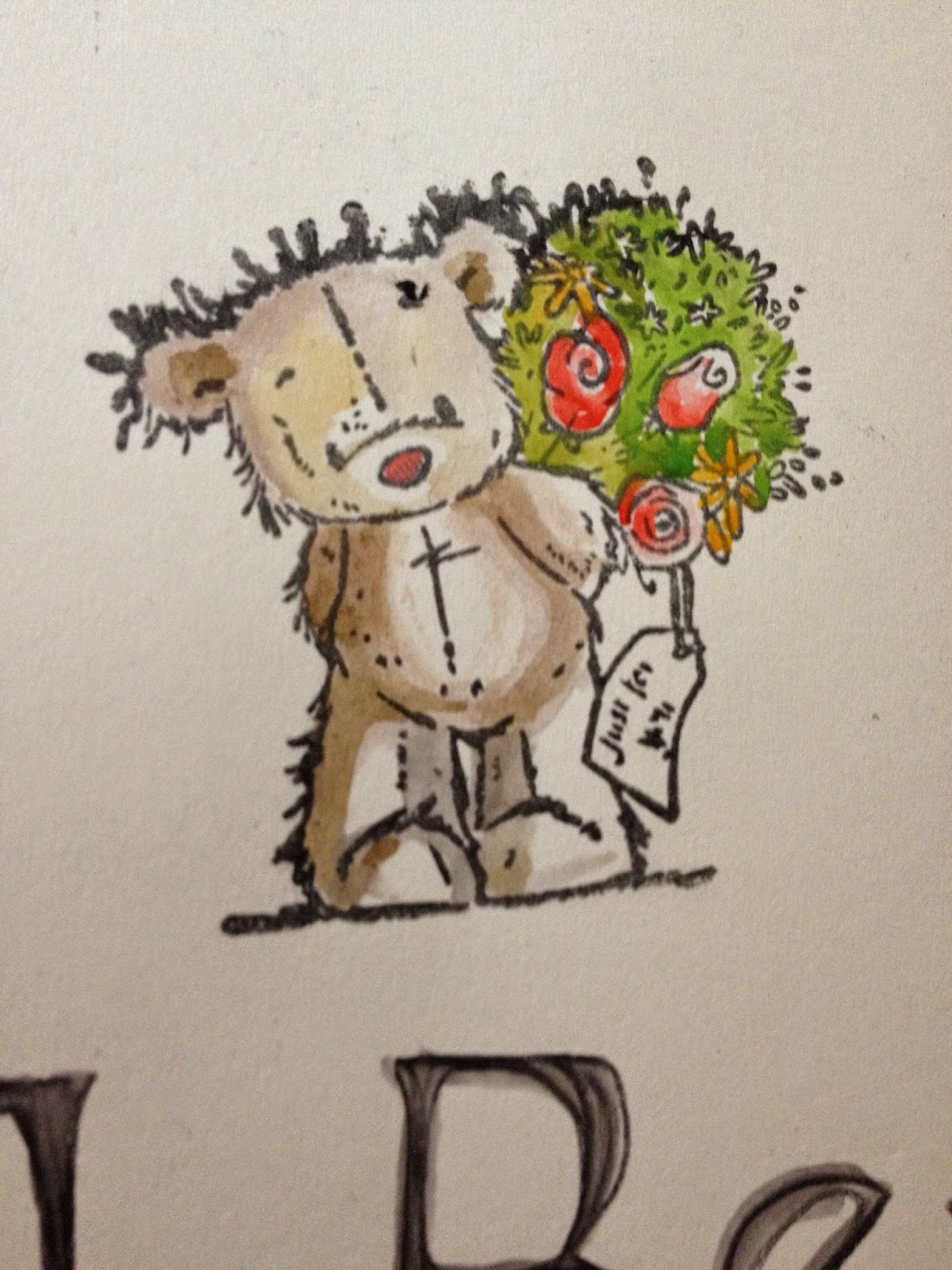 I received the first of some magazines that I have briefly subscribed to. (Briefly because it is an offer to get five months of three magazines, one of which I always buy anyway, for only £1 each-I am going to cancel the subscriptions before it goes full price!) These thank you bear stamps came so I did some stamping and colouring in. (pencils and watercolours) Not something I usually do but I do enjoy colouring in! 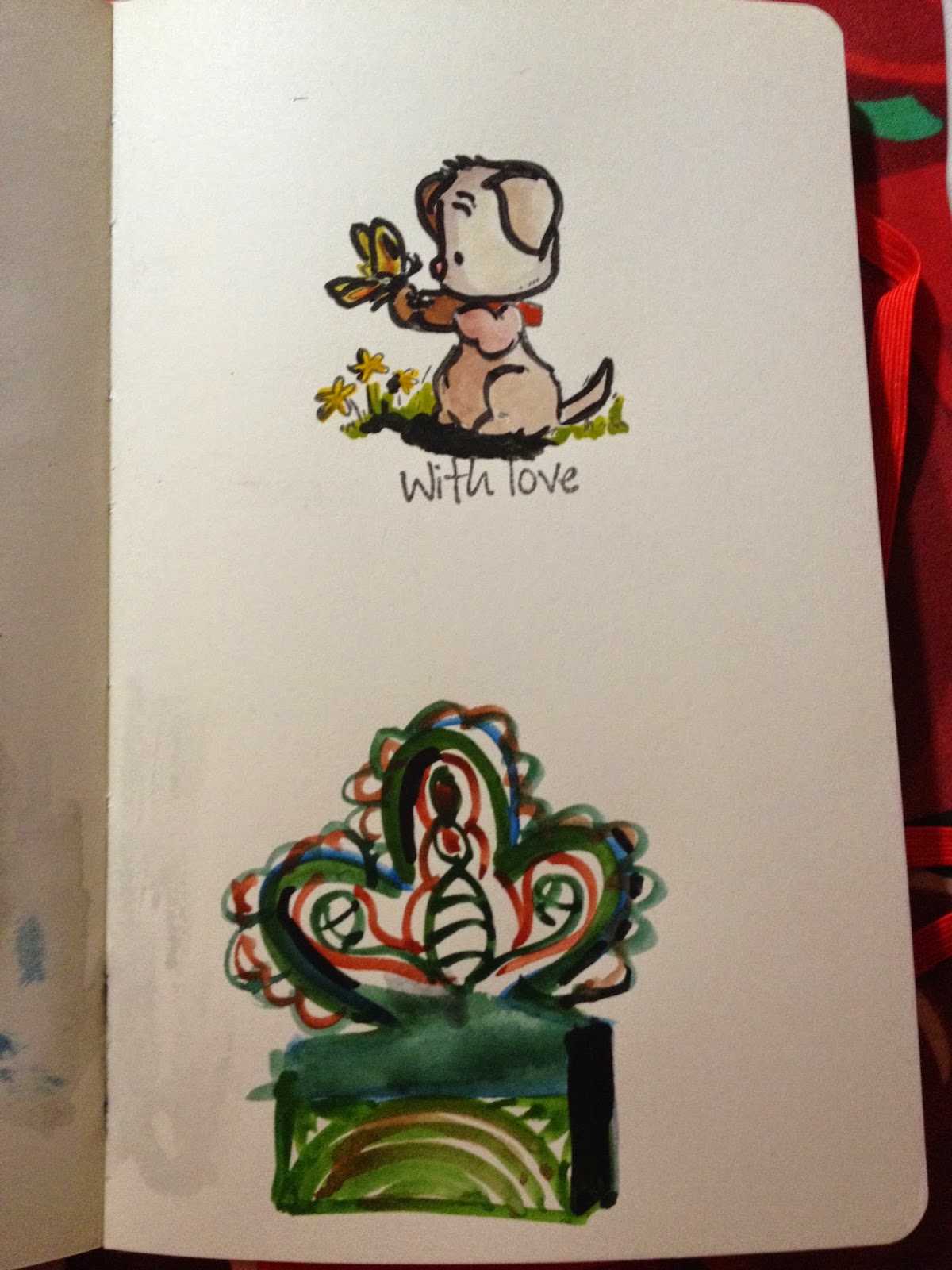 On the way back to my car yesterday, I found Tin Tin in a bin. Well, a box next to a skip, which in my mind was a bin. The box was full of wet books and him, so I rescued him. I hope I didn't leave Snowy behind! 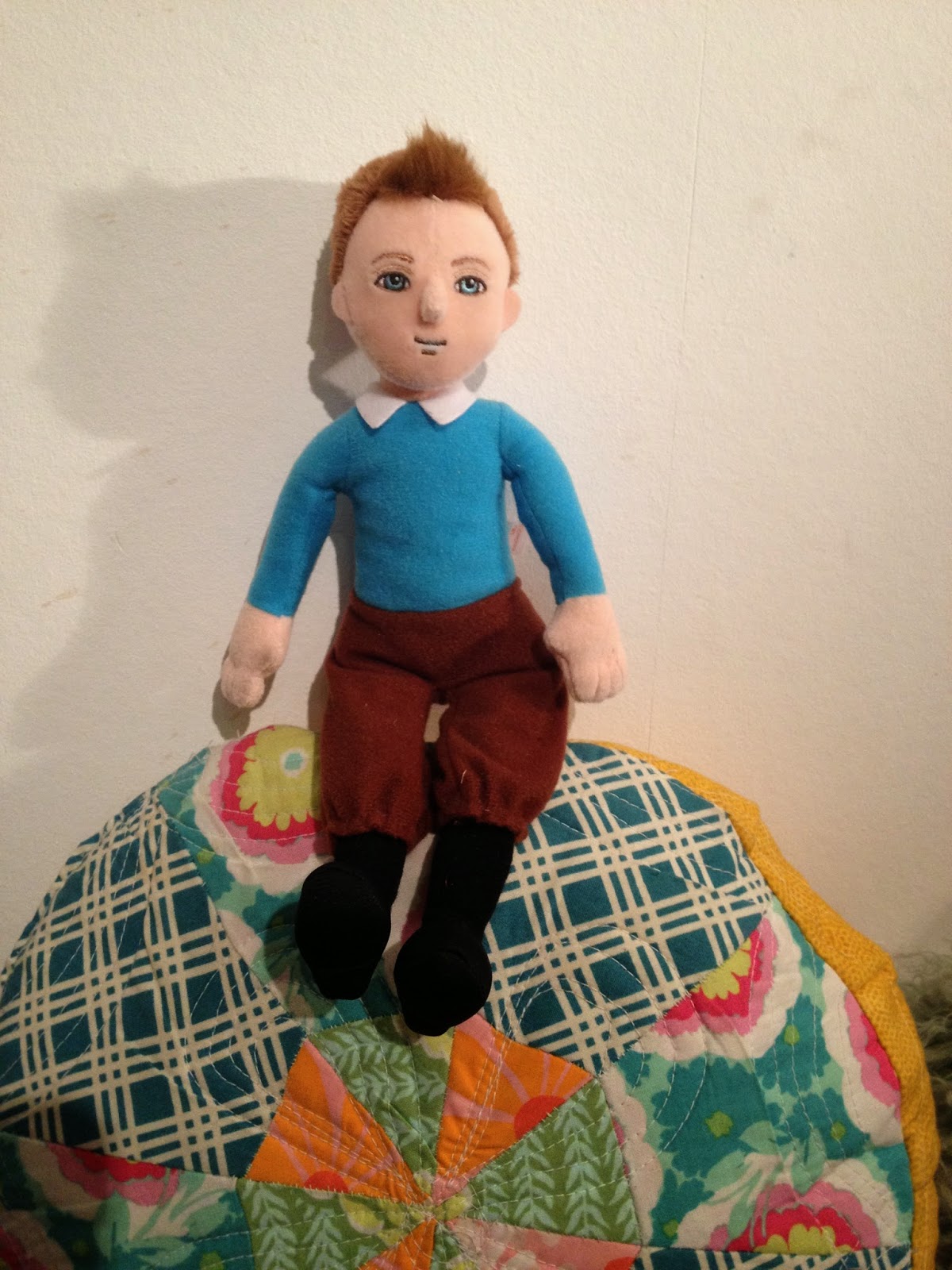 Today I had Reception in the morning, always lovely, then year one in the afternoon-party time! I am really enjoying this week! 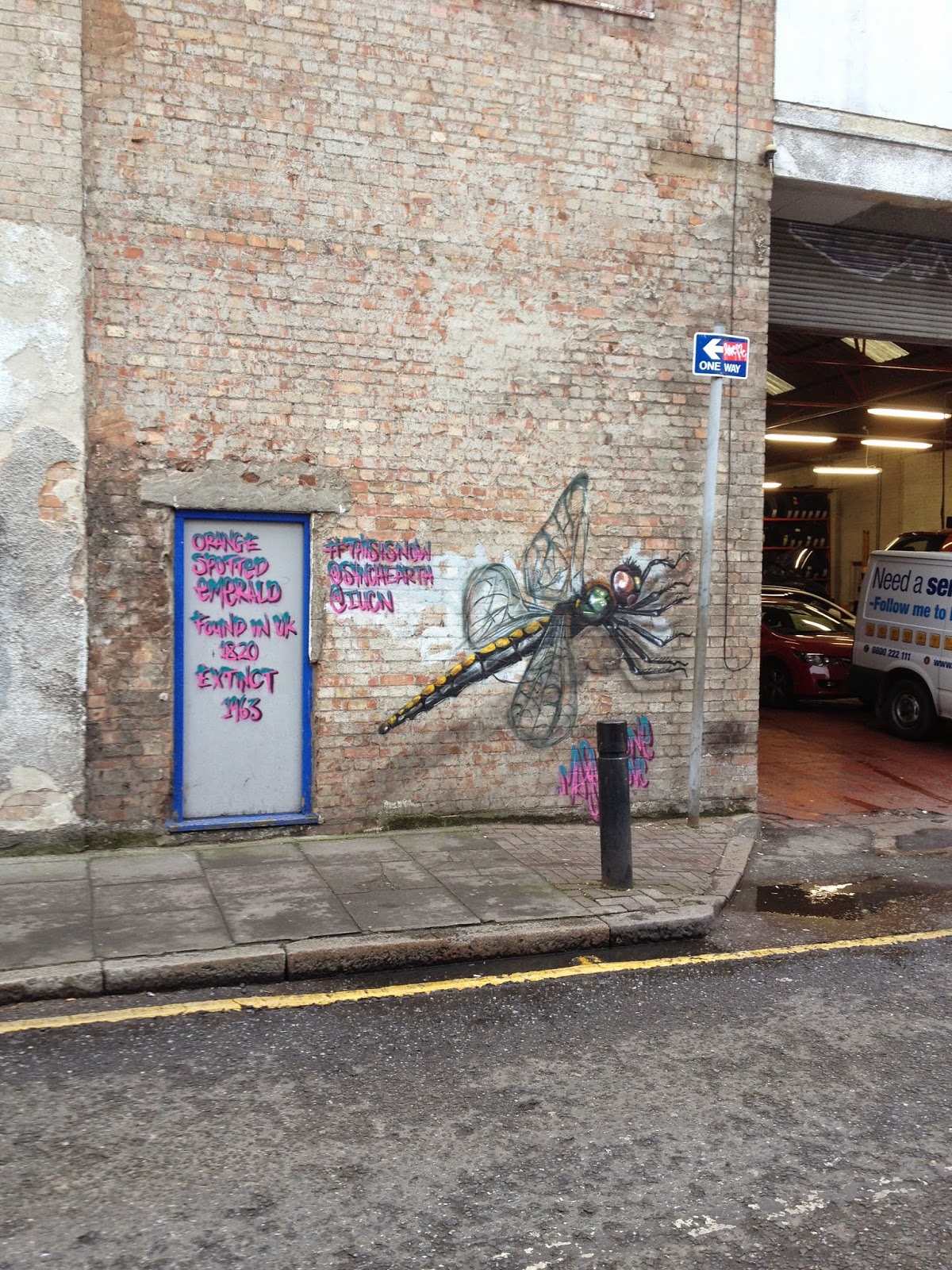 Opposite Subway, where I got my lunchtime coffee today, I saw some more nature street art. I took the photo quickly as there were lots of people around. I only read the words later. It is about an extinct dragon fly. It seems quite likely to be the same artist as the bees as the theme seems the same, but the style looks different to me. Bethnal Green is such a great place to wander around!
Posted by Sarah at 14:35

Oh, I love the dragonfly! I agree it might be the same artist as the bee. There's an artist (or a couple of artists) who have painted British wildlife on walls in that area for some time -- pigeons, foxes, other animals. Might be the same ones.

I love the gift tags! I have been making hand made cards. Have a happy Christmas!