Stuff is a Verb

My favourite quote from a child this term is as follows: I was in a year two class and the children had to use their reading books to find, then make lists of, nouns, verbs and adjectives. I was going round to each child to check their understanding by questioning them as to why such and such word was in one of the three categories. One girl had written 'stuff' in her verbs column. When asked why she said 'I'm doing stuff'. Of course! You do stuff, therefore it is a doing word. I think she is right! I suppose you can also stuff something, then it really is a verb. I have been doing lots of stuff this last couple of weeks. Here is some of it. 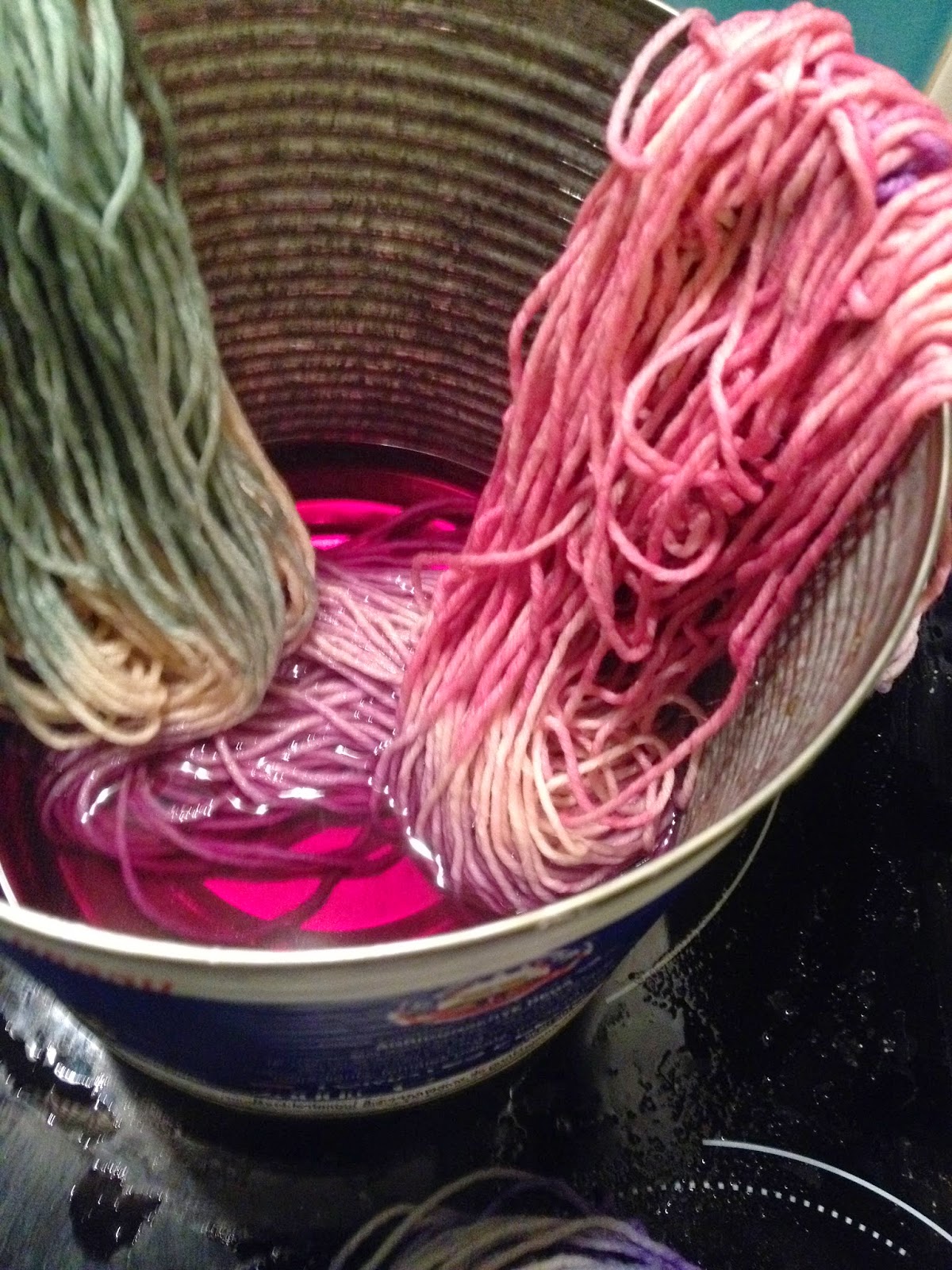 I bought some white cotton yarn in a charity shop. Slightly smelly but that didn't matter as I bought it intending to try hand dyeing. I used some old dyes I got from eBay. The dyeing pots are some tin cans picked up outside a cafe who were offering them to be used in whatever way you liked. I used boiling water and salt and left each colour to soak for a while. It has worked fairly well. I have one more skein, and have bought some kool-aid to try. I have since read that it works best on animal rather than plant fibers but I will give it a go anyway. 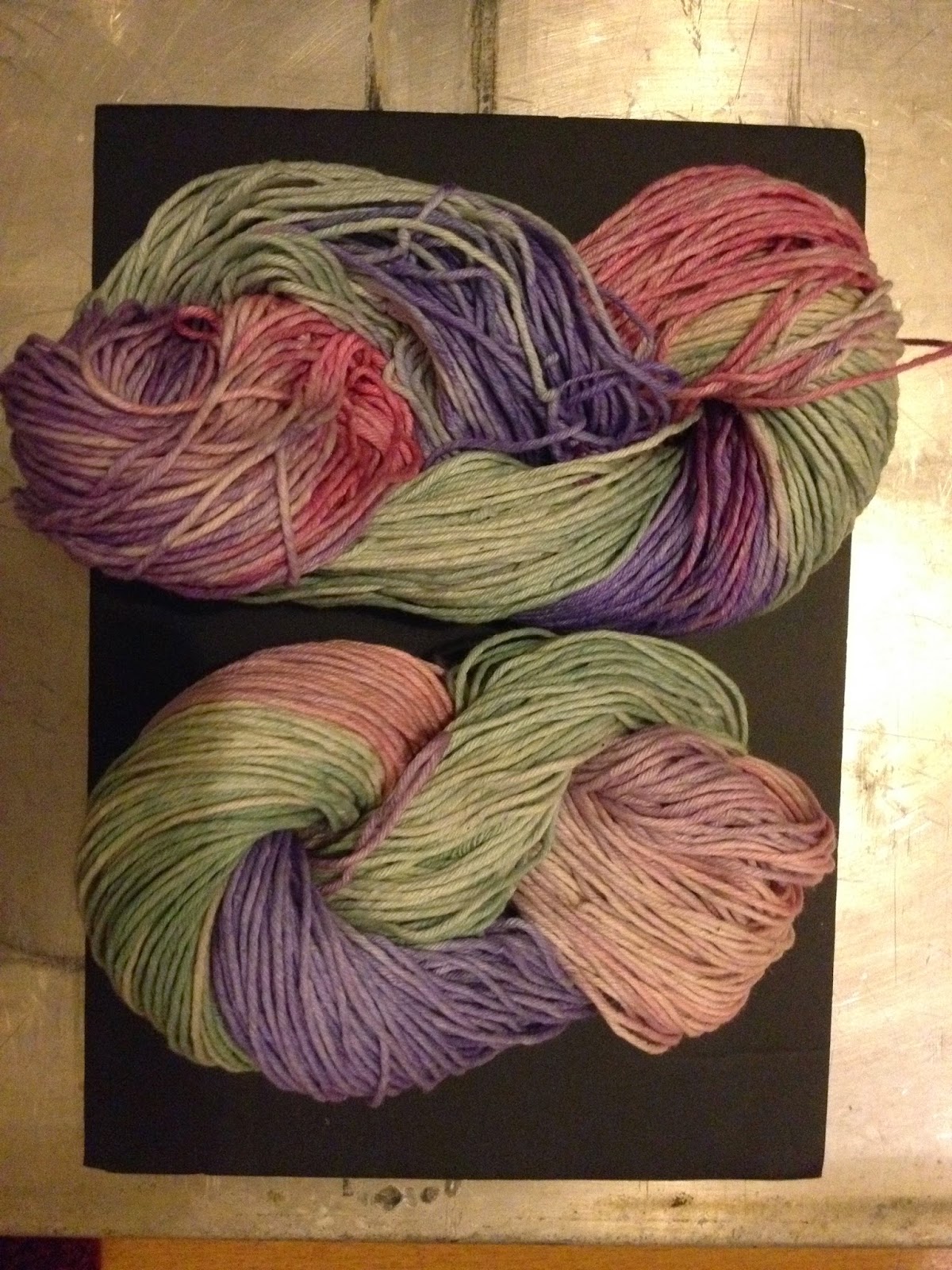 At the weekend we went up to Northumberland to stay with our friend Phil. He has been busy over the last year or so, organising the Allen Valleys Folk Festival. Andy couldn't get the train we planned so I went up on my own, arriving in Allendale where the festival was held at about 6.30. No phone reception, not immediately obvious where the village hall was, but, some friendly locals later I found my way there. Below is Martin Stephenson playing with his band The Daintees. He was rehearsing when I arrived. Once he had finished, I said hello (I know him as he is Andy's sister Helen's partner) He took me to the pub with the band which was fun, and then Phil turned up too. Andy got there in time to see Martin play which was good. He is really good and very funny! 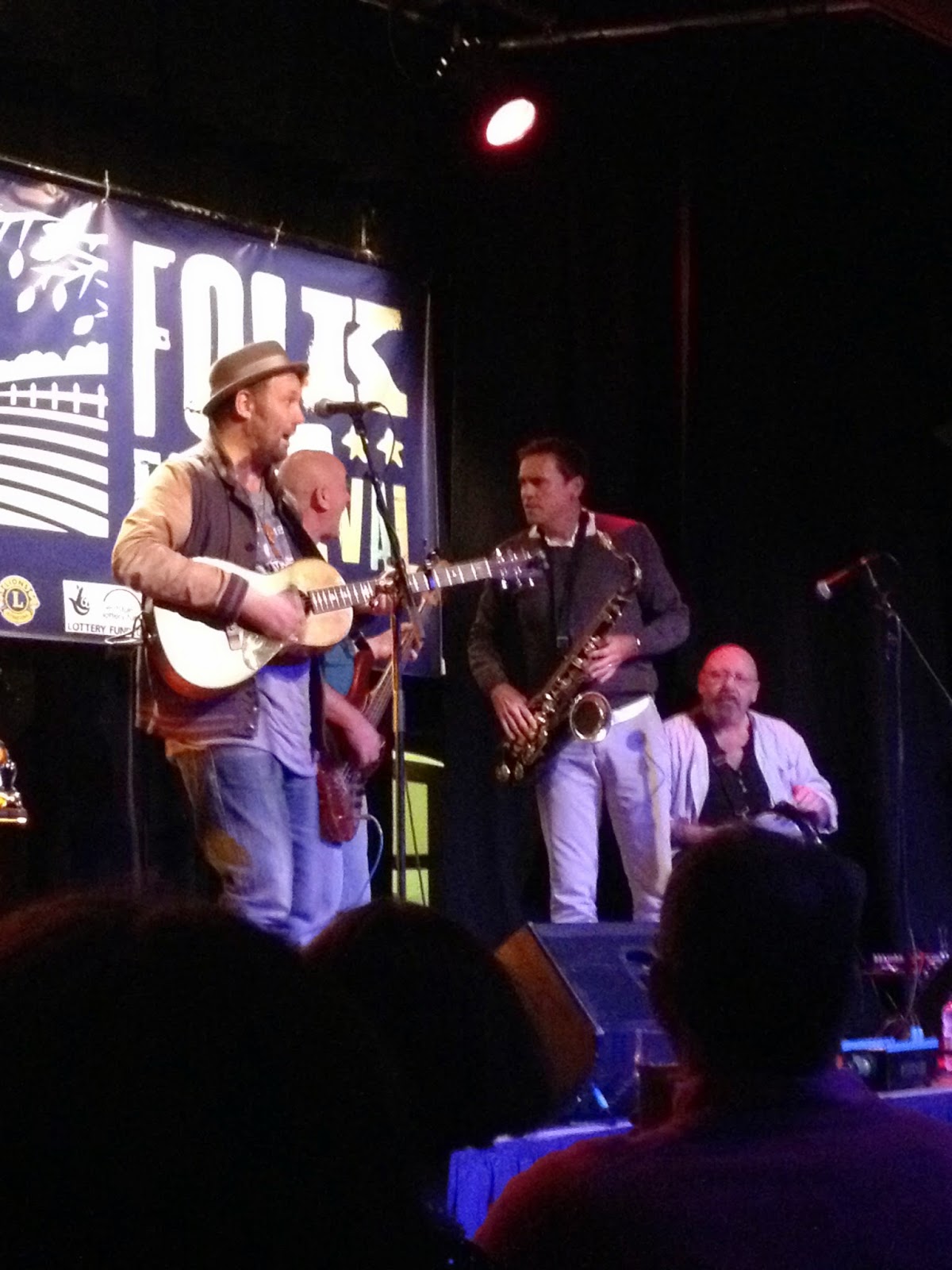 This is Phil, playing on Saturday in the church. He was very good too. Amazing guitar playing! 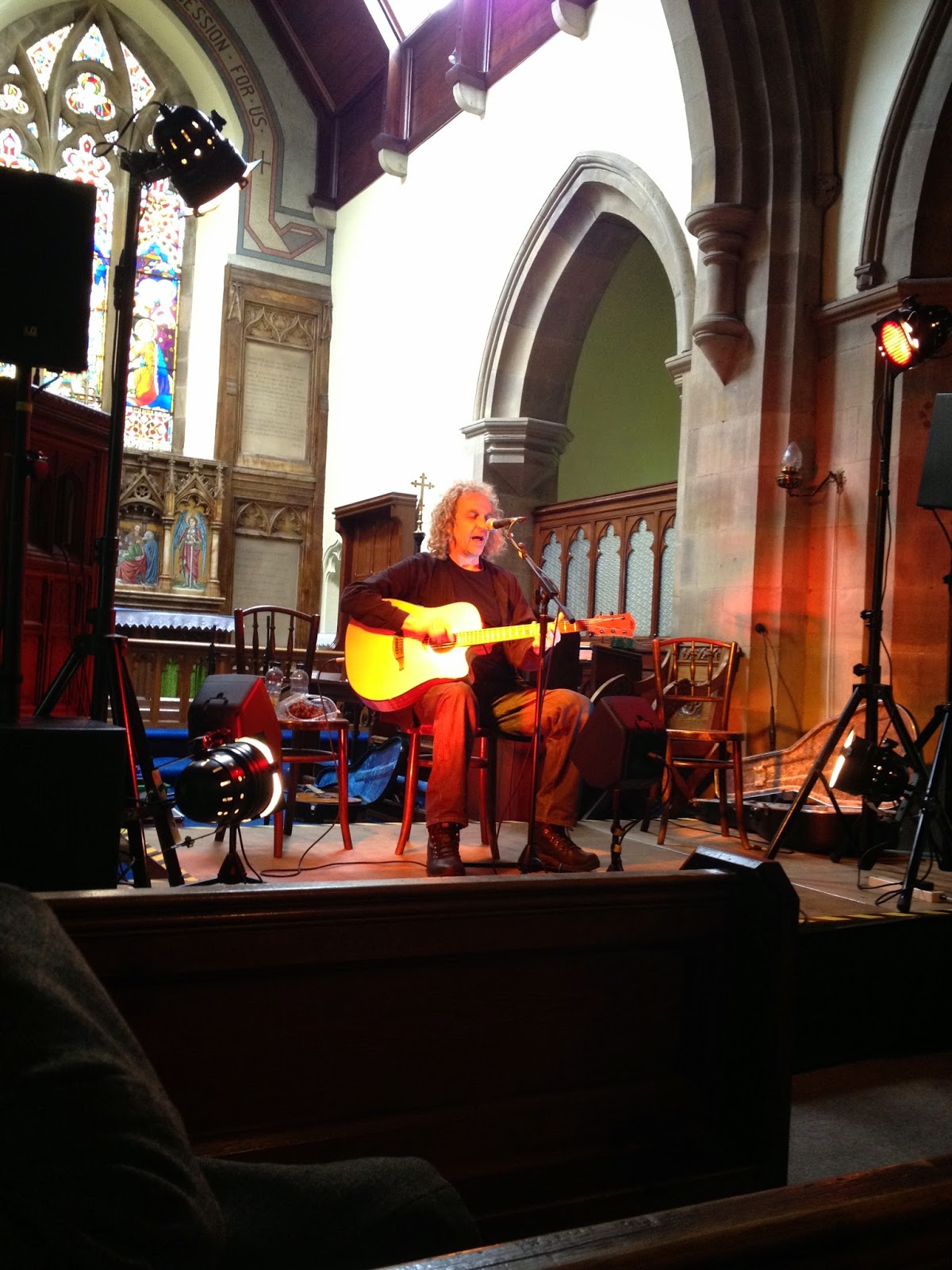 This is the doll that replaced the failed mouse/cat witch doll. She is more of a ballerina than a witch. I do just rush into things with only a vague idea of how I am going to do them, so surprise myself with how they turn out. This doll is very crudely sewn together but has the advantage of pose-ability as there is wire in her arms and legs. There is also a paper clip shoved through her head and into her neck to stop it from wobbling. It can be quite brutal making dolls! 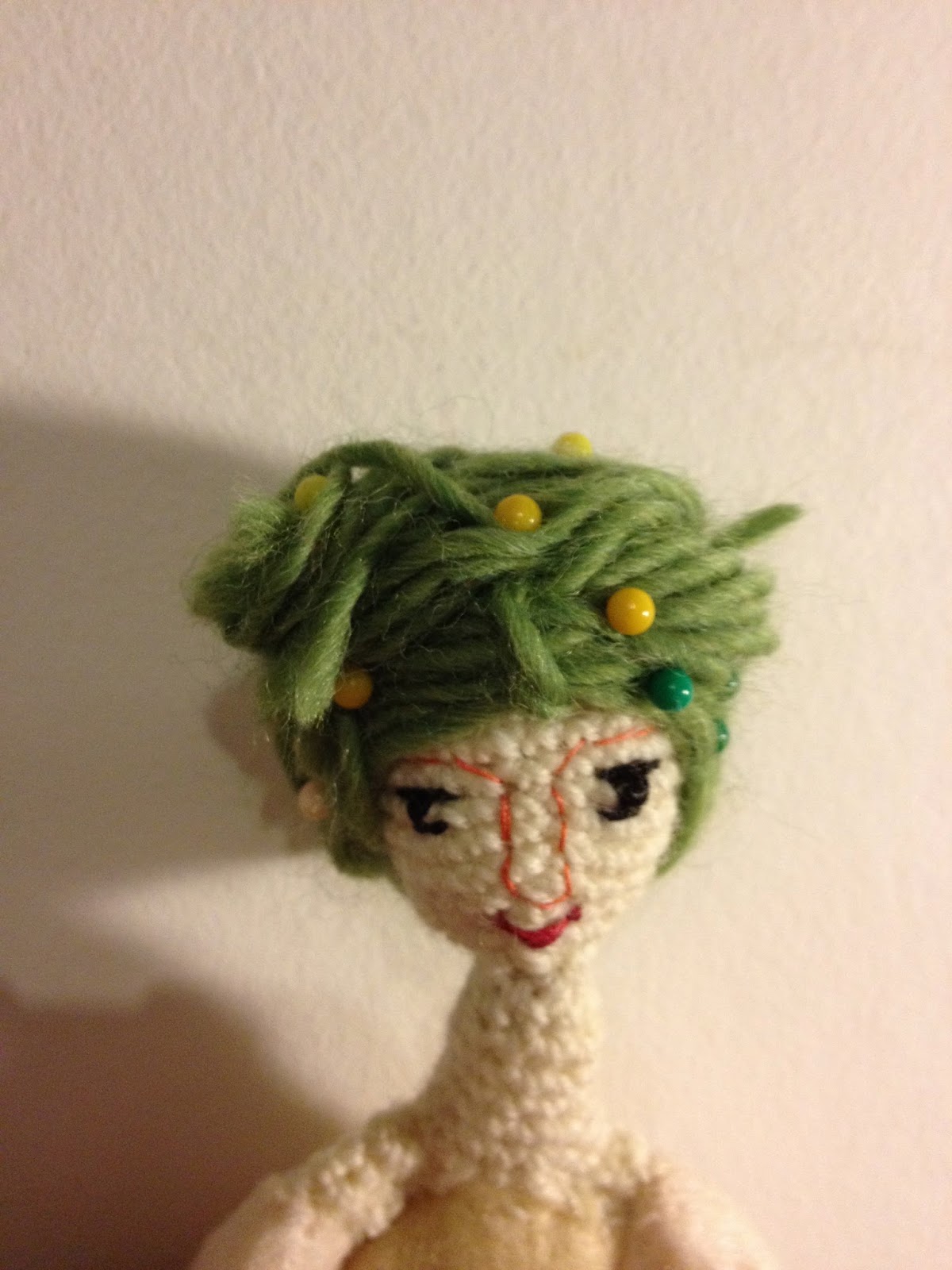 Her hair is pinned in place. It was quite a good method of doing hair-wrapping and sewing. Much quicker than embroidering. 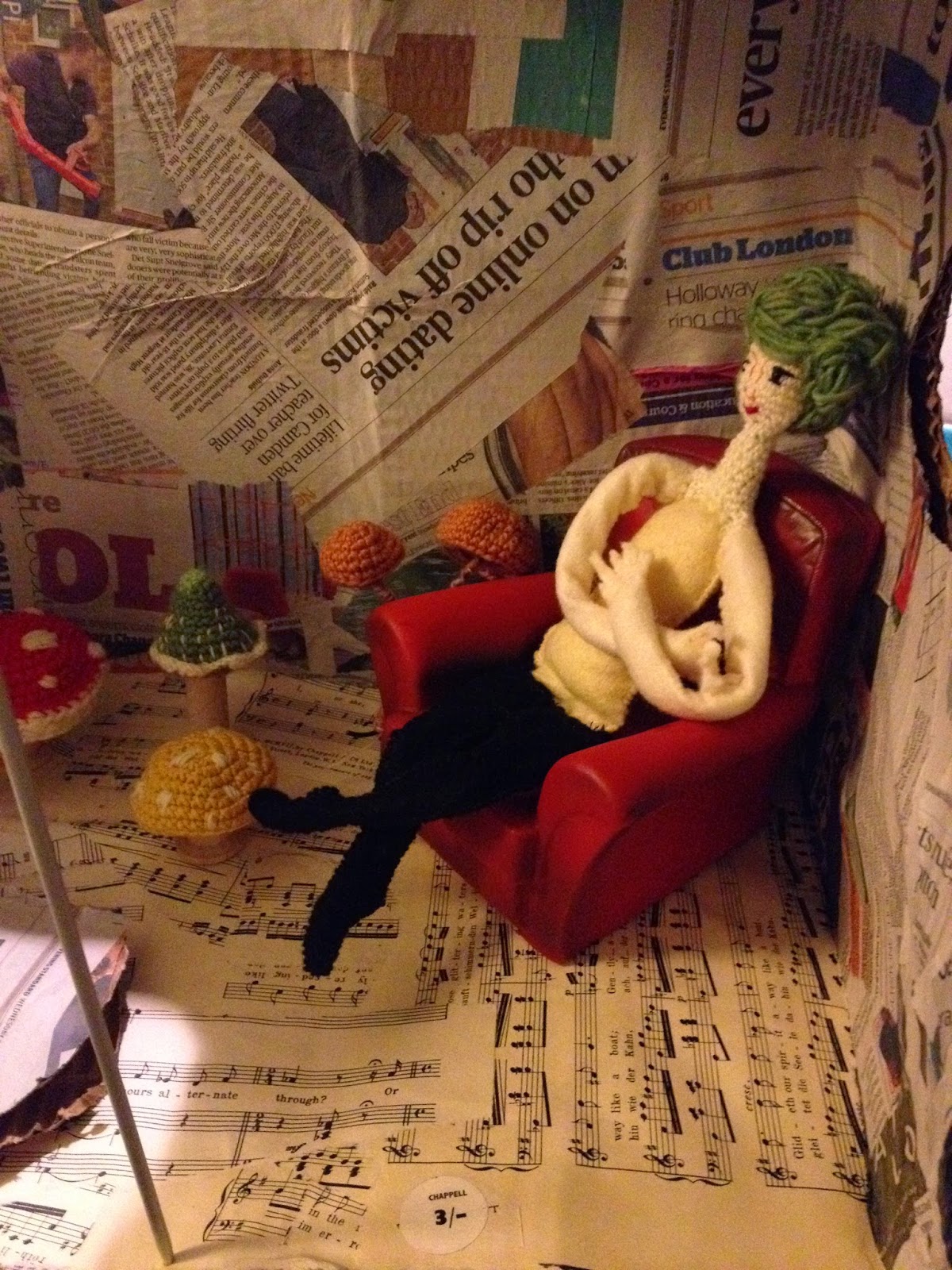 I started a papier maché house for the witch at the same time I started the doll. The doll is too big for the house. But I am not starting either again, so the house is becoming a room, a very cosy room where she will do her witchy things. It has a musical floor already so she can dance if she wants. 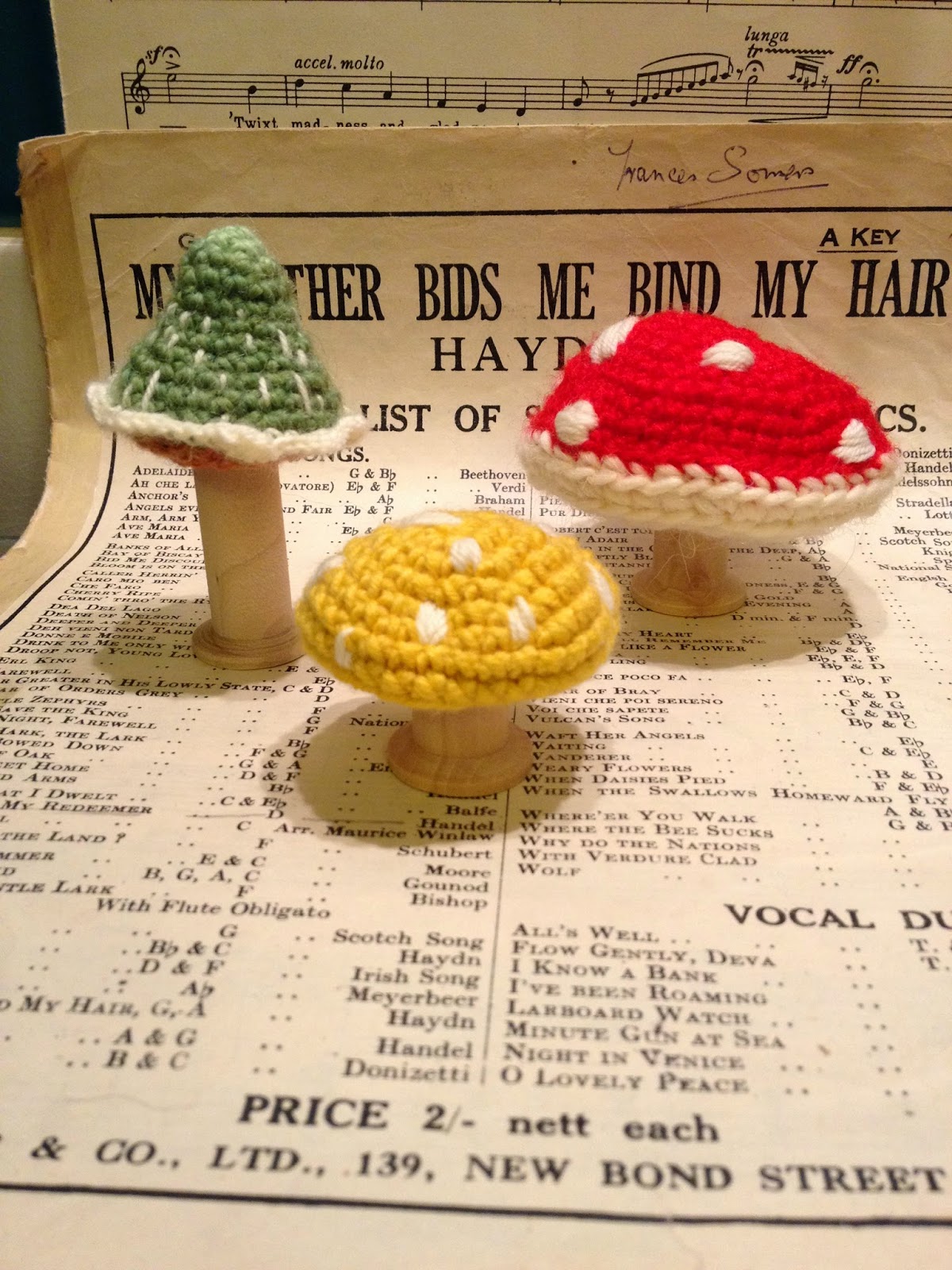 More mushrooms are sprouting. I am looking for pretty ones from my mushroom reference book. 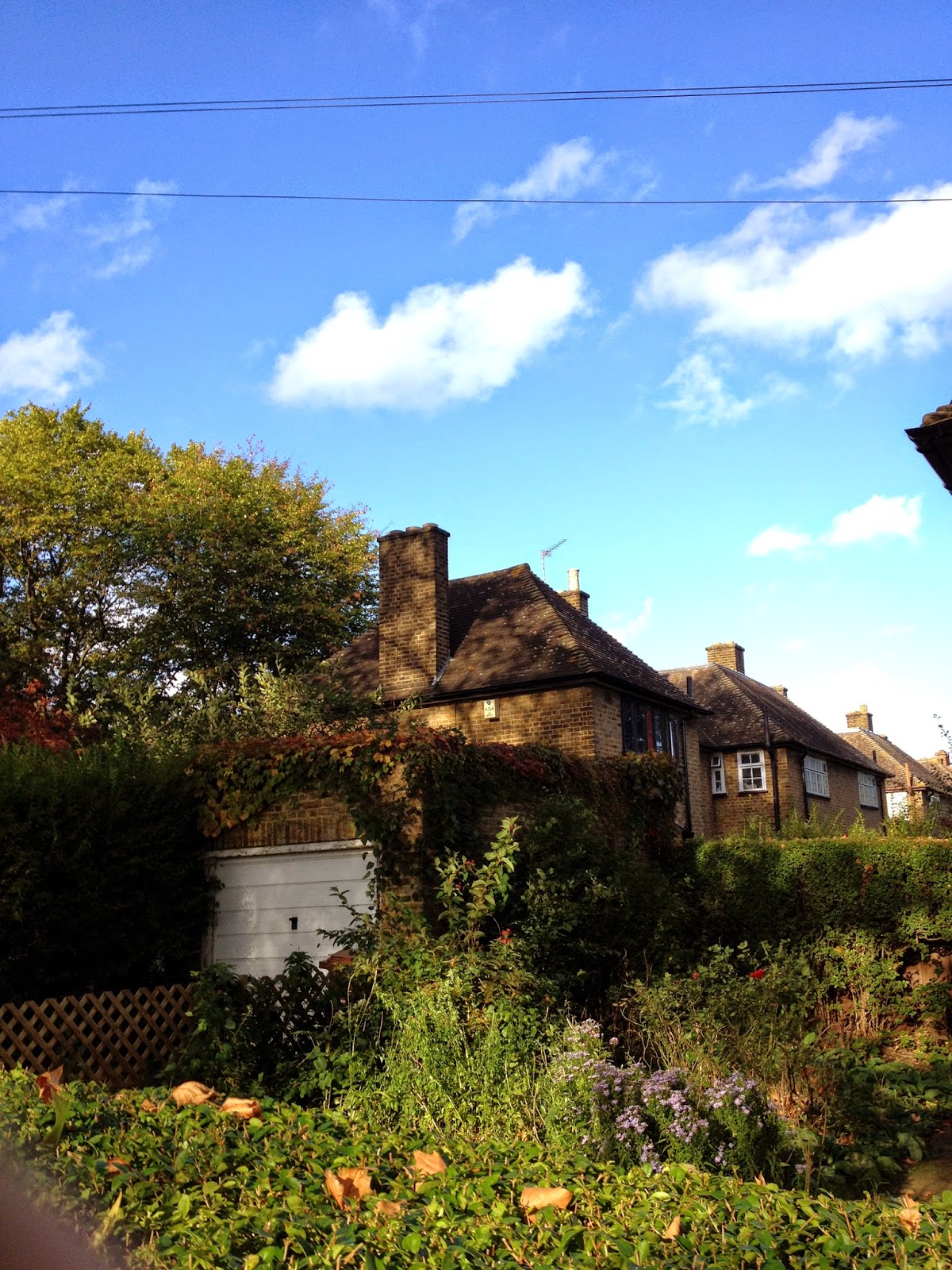 The other stuff I have been doing is working. Three and a half days this week-the most yet. Maybe it will get up to five next week. This is near where I was yesterday, in a lovely school in leafy East Dulwich. I actually drove my car there! It took a while as the traffic was bad but I got there. It had the added bonus that they gave me a school dinner! For free! It was roast chicken and very nice. 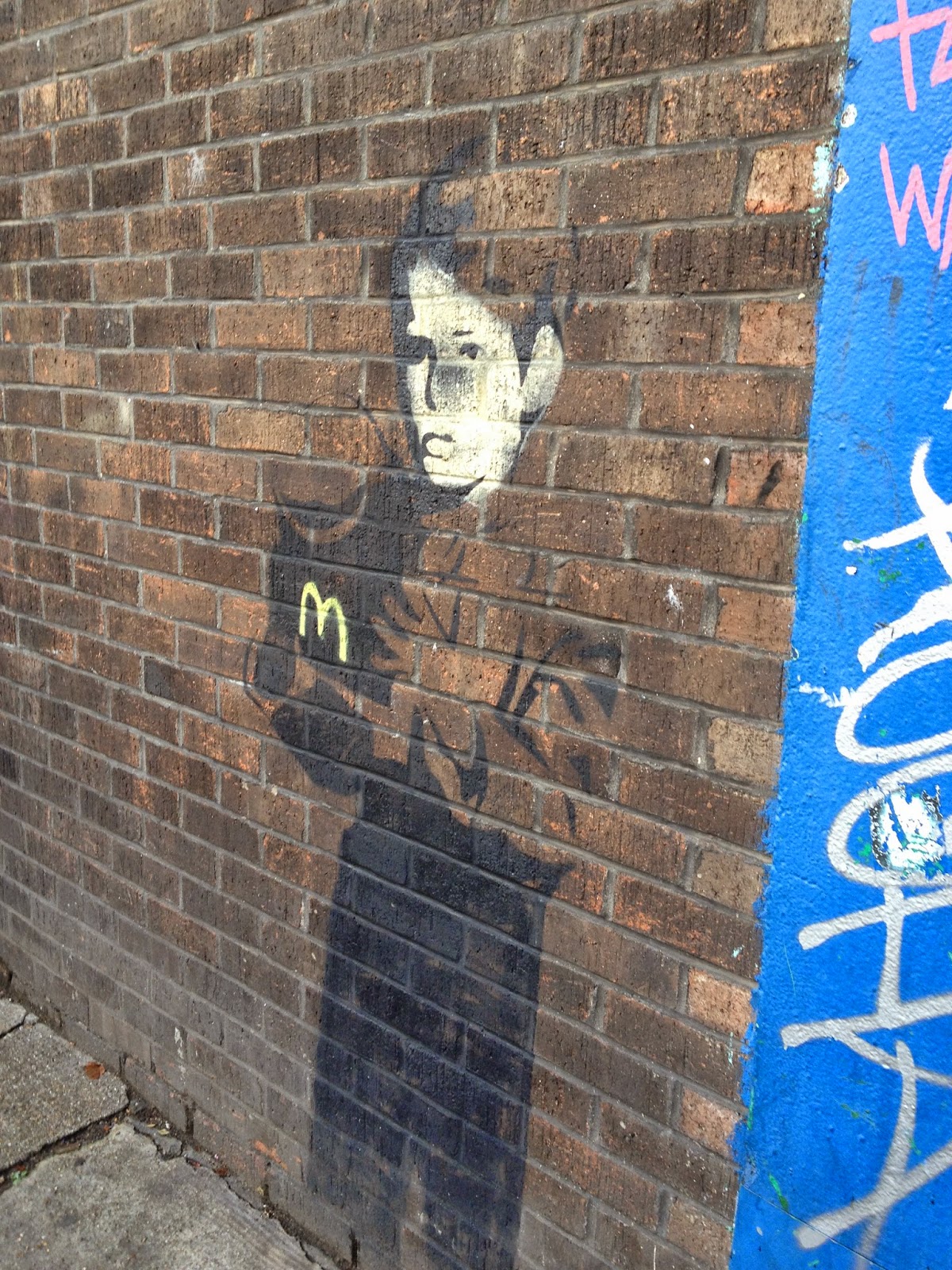 I was back in Bethnal Green today. I saw this on the way up the road to the school. I had to go on the Central Line for two stops and it was extremely packed. We are spoilt with the Jubilee line as it is not usually like that. I saw a violent exchange between two men trying to exit the train on opposite sides(it was a double platform) and this poor girl got caught between them and nearly pushed right over. Terrible behaviour!
Posted by Sarah at 14:26

You HAVE been busy! I've seen tempers flare on the Tube but things rarely come to blows. Just too many people in too small a space.

I feel slightly as if your witch doll has moved in with the wombles. I love her hair!! xx

Fun STUFF! I especially like the lighting in the photo of Phil and his guitar in the church. What a great place to hear great music. Like your new projects and also the painting on the brick wall. Glad you survived all your travels about the city.