Here are a few of the drawings my class did. They had white and pink freesias, purple tulips, and white and pink roses. We did lots of talking about the shapes and colours they could see as they were working. Some of them found it really hard to do but kept trying. 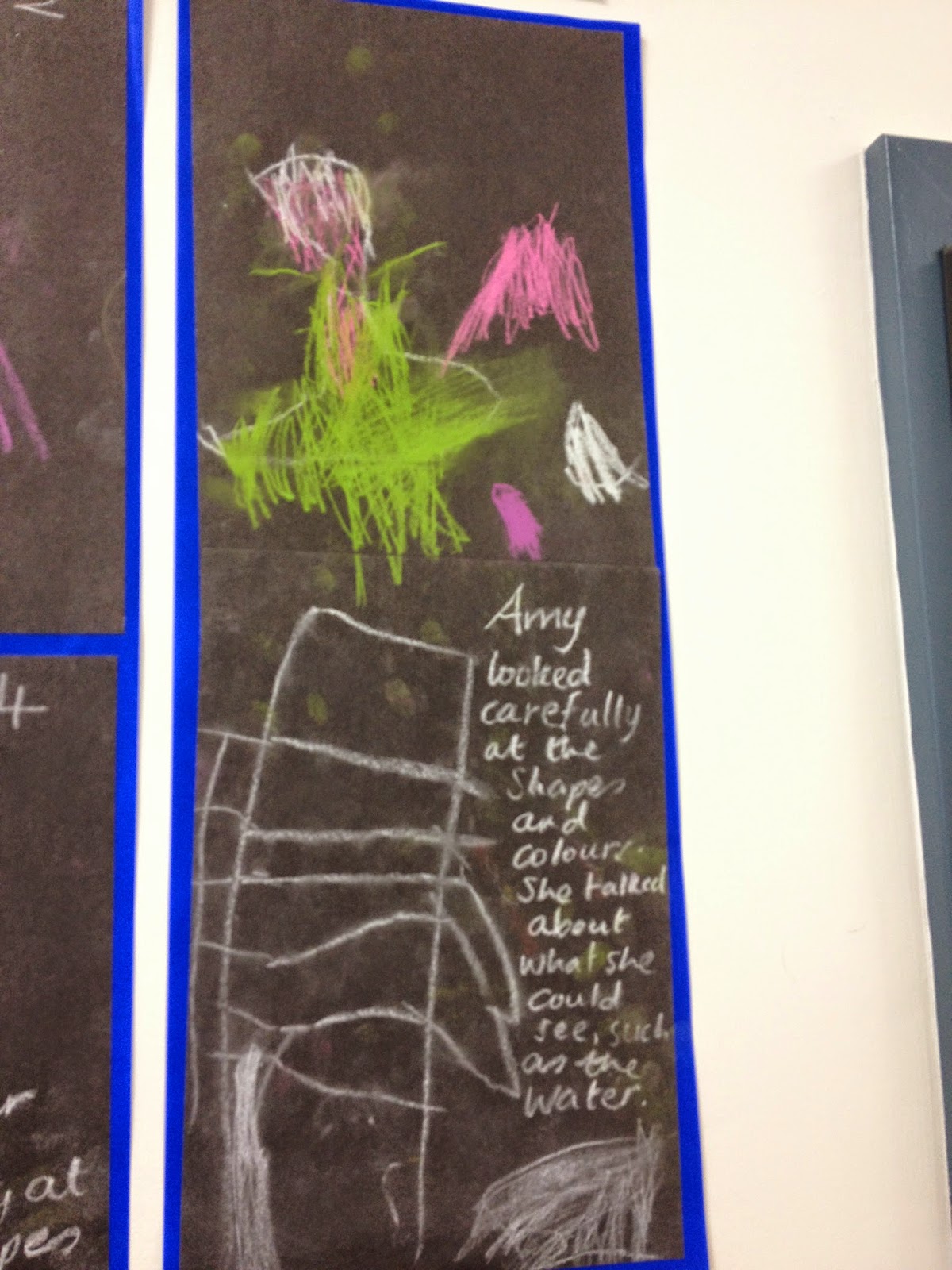 The white rectangle shape at the bottom of Amy's drawing is the water bottle the flowers were in. She did this part with no suggestions or talk. She has got the horizontal lines on the bottle and also has managed to convey that it is round as her lines go off either side of her main shape. 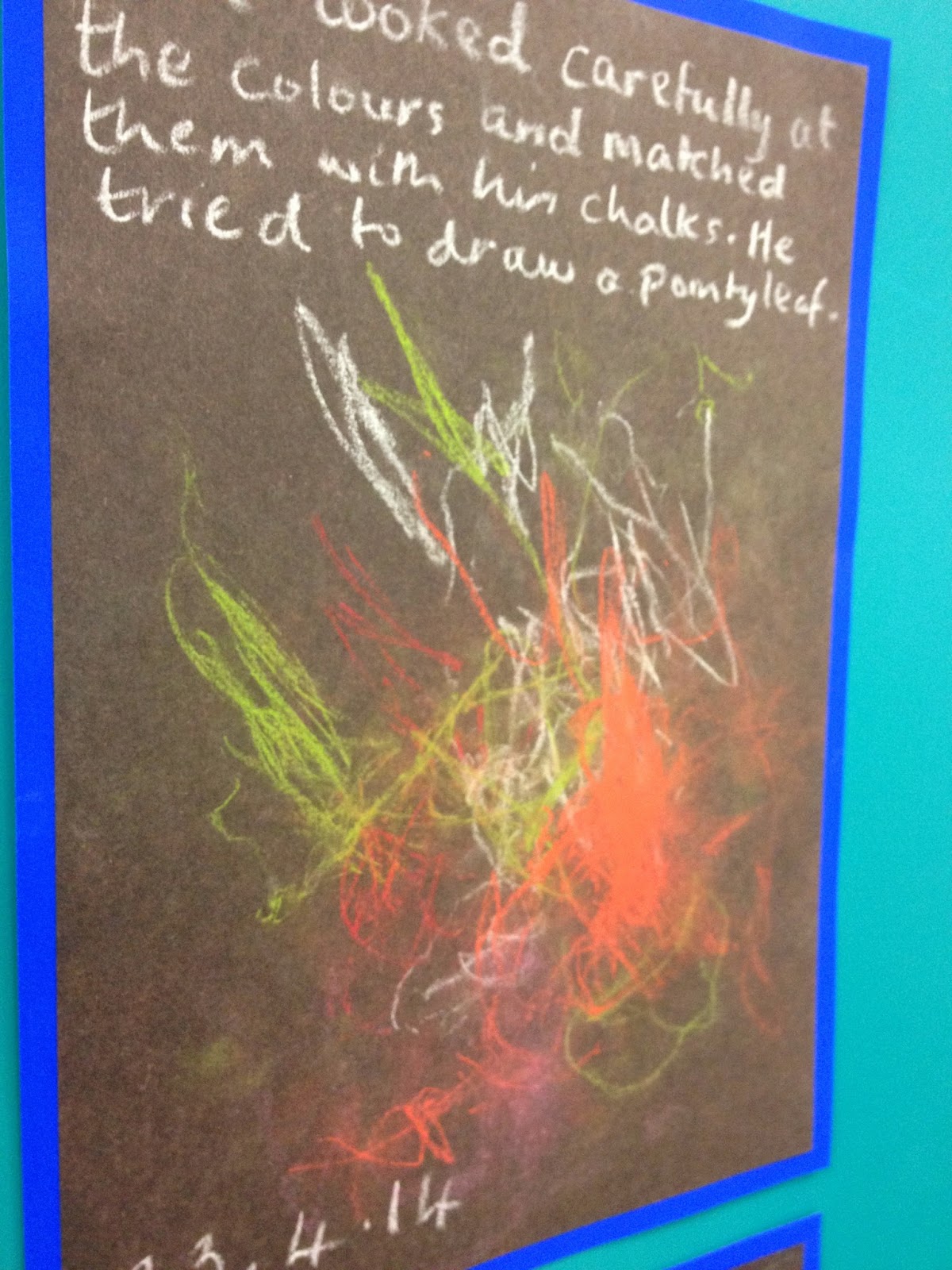 You can see what a different stage Issa is at. He mainly concentrated on matching the colours which he could do, and has made a good try at a leaf shape. 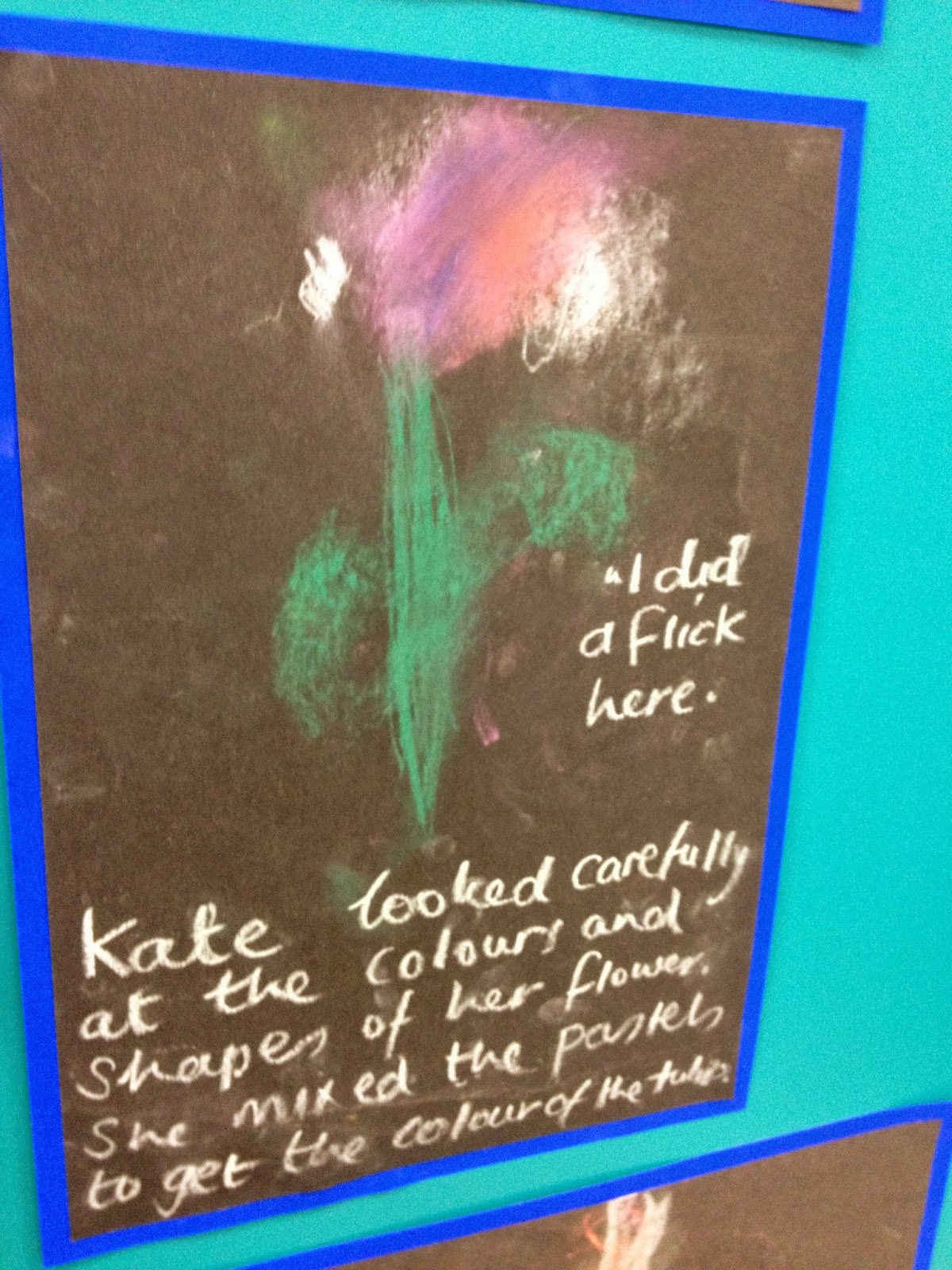 Kate mixed the two colours together after I explained that you could do that with pastels. I love the way she has talked about doing a flick here. (Relates to letter shape writing-I am always going on about a flick!) 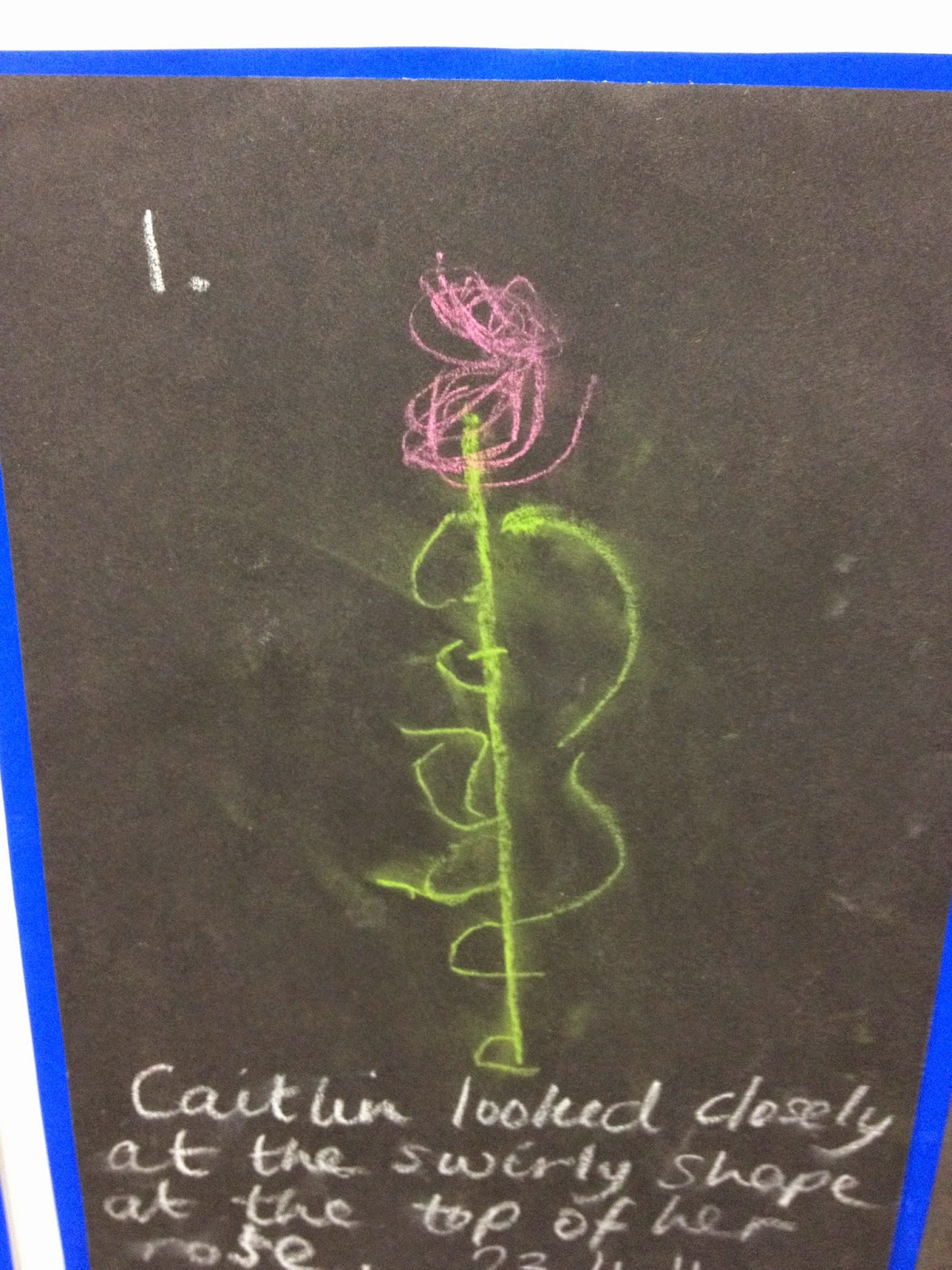 I love Caitlin's interpretation of the pointy rose leaves. 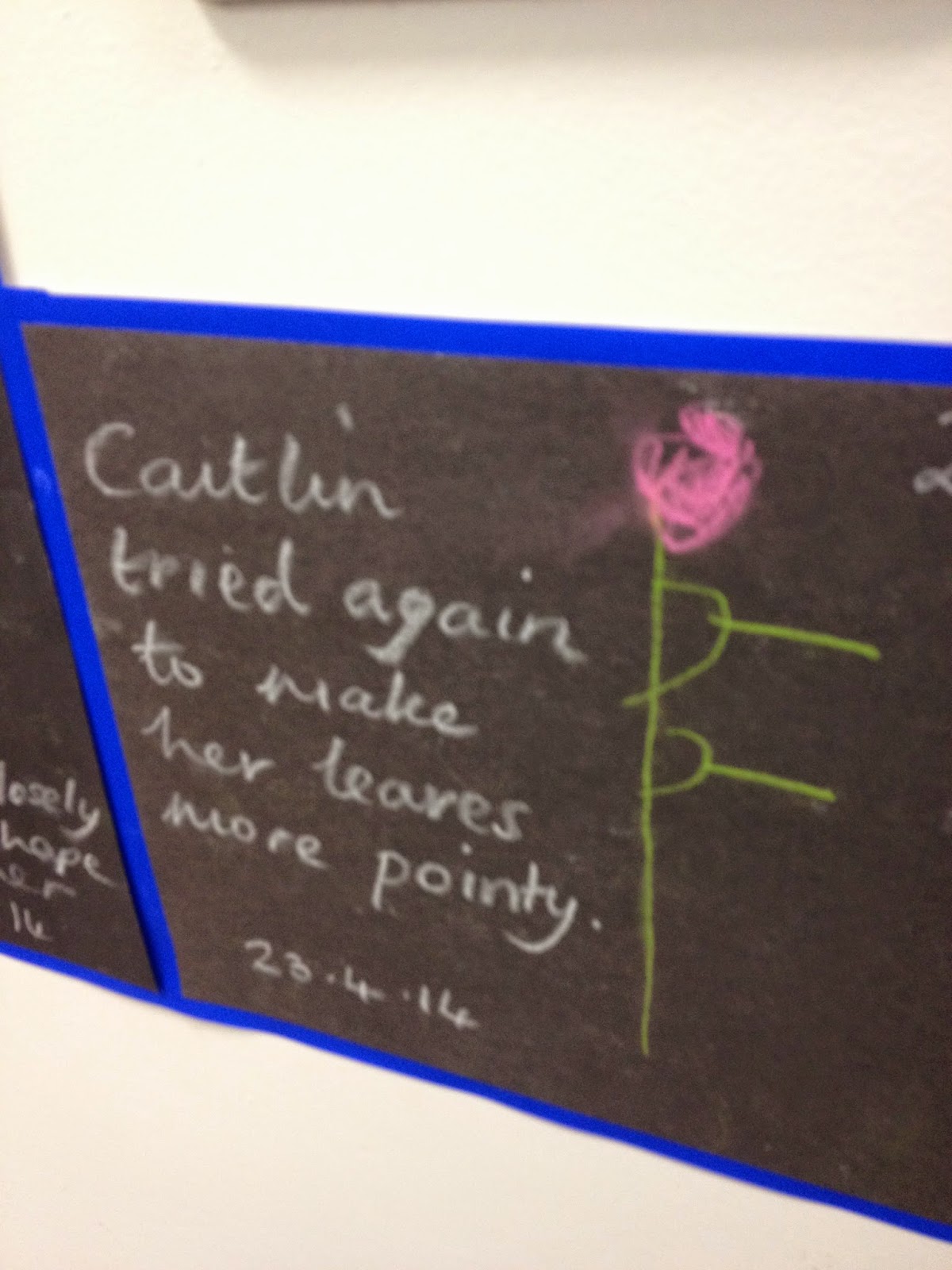 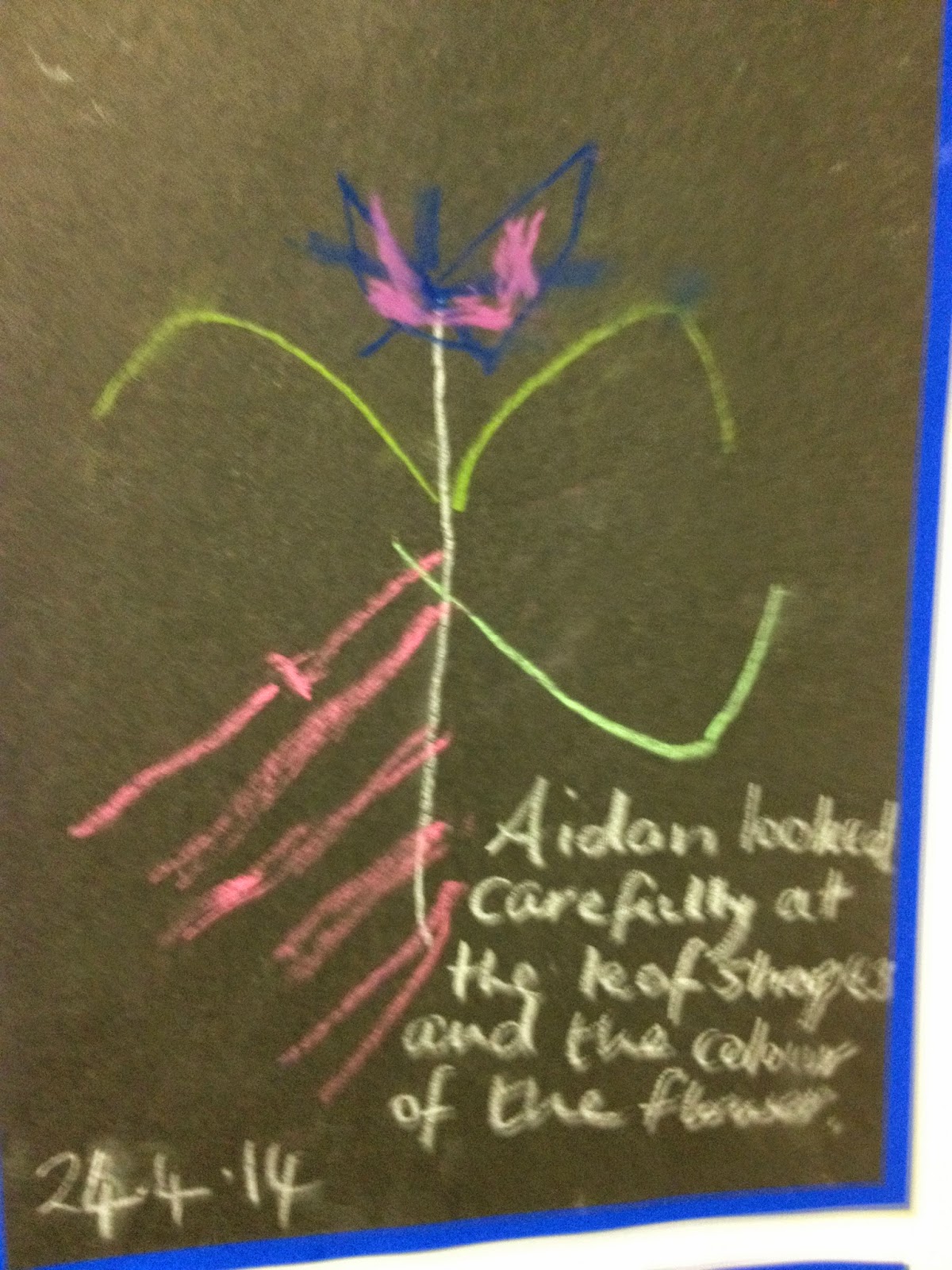 Aidan managed to get the shape of the tulip, its petals and leaves very well. There was a palm leaf in another bottle, and the pink angular lines on the left are his interpretation of this. 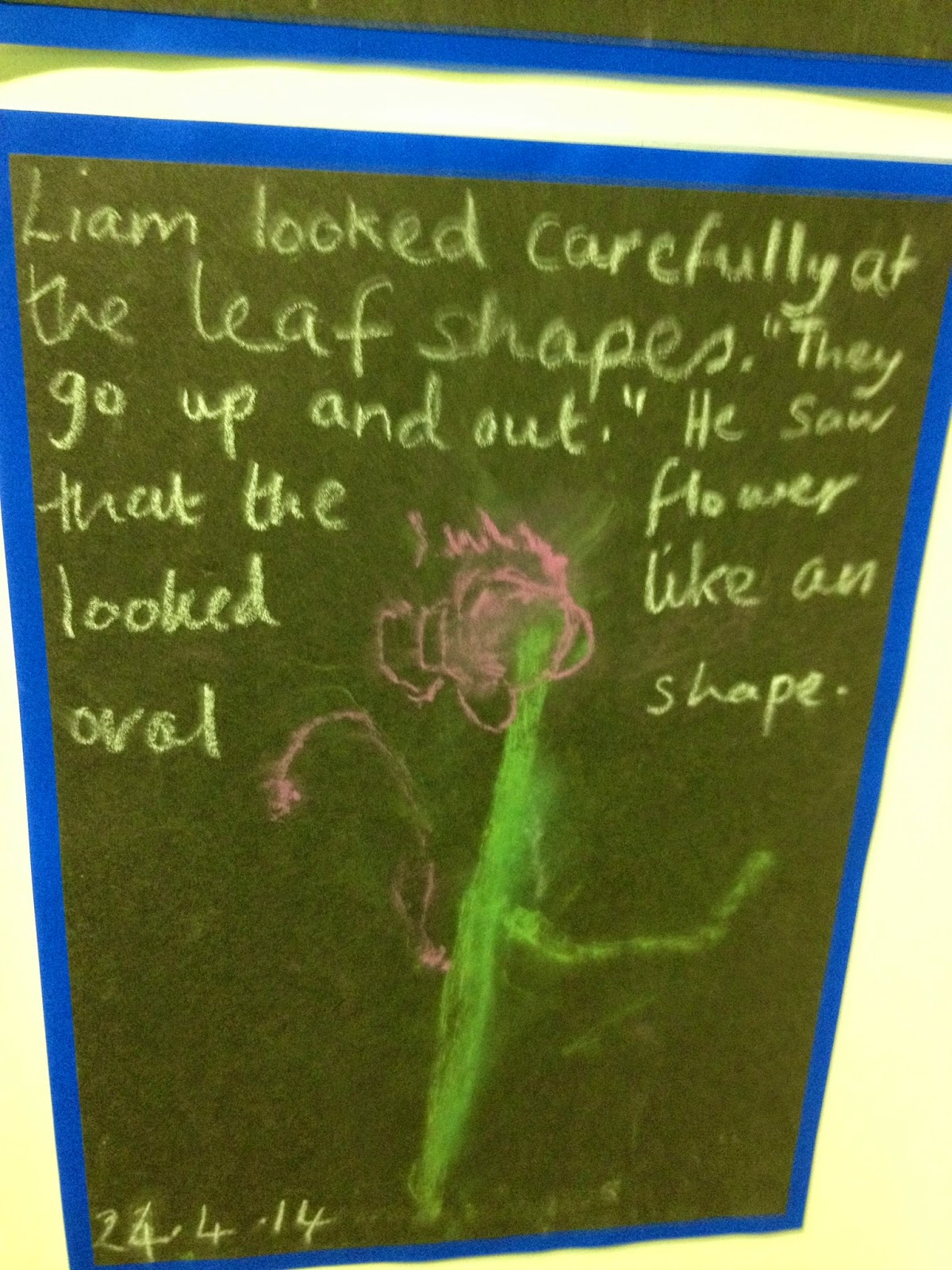 Liam's is the one that makes me most proud-he is a very sensitive boy who can be upset by the slightest thing at times. He tries to fight against it but sometimes he just can't and he just has to cry. I feel so sorry for him, all the more so because I was (and still am sometimes) like him and I know how hard it is to be like that. He has come on so far and has worked really hard to overcome his worries. Anyway, as I was talking to him about his drawing, I asked him to look again at the tulip leaf as he had done it purple and I wondered if he wanted to change the colour. This set him off I am afraid. So we had a big talk, part of which was that it is your picture and if you want to do a green leaf purple then you can! (Art can't be wrong kind of idea) The reason I am proud if him is the way he sorts himself out and can talk about what he is worried about and get over it much more quickly than at the beginning of the year. And because he has done a pretty good job at drawing his tulip!
Posted by Sarah at 12:05

These are all wonderful, I love them! Liam touches me, too. Erik had a little friend who failed "colour", his skies were orange, his grass was purple, and apple was brown and his bananas were pale green. His mother and I both thought he was just highly creative, turns out he was colour blind. He made wonderful art.

whoa, they're *all* stunning, sarah!

Oh love this post!!!! What fabulous little artists are blossoming under your guidance! Ros