I am not a millionaire yet!

Last week was spent almost exclusively getting ready for the craft fair. As well as two days of wet felting (aching arms but if I did that all the time I would be very very toned in the arm department!) and lots of crocheting, I also sorted out and packed all the 'vintage' things I have been buying to sell. I was optimistic at the start of Saturday when we set off. We got to Otford nice and early, so bought breakfast from a lovely cafe and talked to the very nice lady owner. Once I had set up ( a fairly stressful experience!) Andy went home on the train. It was great having him there to get the stuff from the car and provide moral support! There was no room for any of the vintage stuff so it all stayed packed and went back into the car. Four hours later I had made £1.50-on a bag of beads-bagged, not made by me, and a bag of felt balls-made by me. Luckily I am not trying to make a living at this. There were not that many visitors to the fair, and they were mainly elderly people. Some very nice people and a few complimentary people and one very rude woman who said 'Ah yes, this is felting.' She then picked up one of the faces and said, 'But what would you do with it?'/ I shan't tell you what my mental reply was! Despite the lack of interest, I did have a lovely day. The stall holder next to me, Tamsyn, was really lovely and we chatted all day. She makes great little fimo things. I bought a jelly bean bracelet from her which looks very real. There were another couple of women nearby too who were nice. There was a delicious cake stall next to me the other side and I bought some of their cherry bakewell cake-mmm! After I packed up I then went and looked around the little junk shops in the village and spent some of my float! I took my friend back there today for a look around and some lunch. It is a really pretty place. 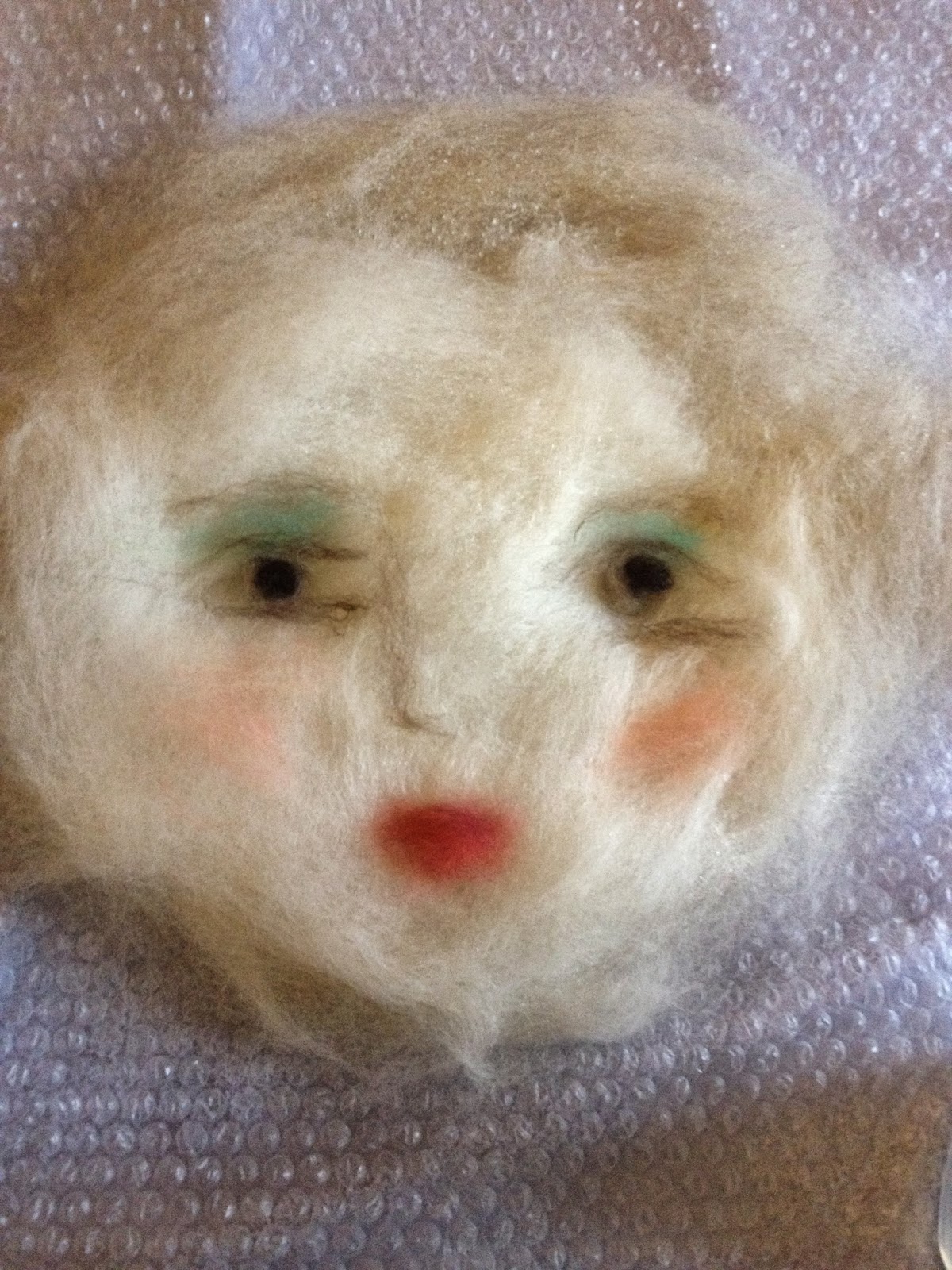 The other good thing about the fair is that having to tidy up all my wool and stuff I had out to get ready for it has spurred me on to have a massive sort out session. Things have gone to the charity shop. The things I bought specifically to sell are going to go on ebay and if they don't sell then back to the charity shop. I have cleaned the back yard, taken horrible things I did not want to the tip, and this evening I have sorted out all my dolls house stuff so they are able to be done-finally! I am most pleased with my efforts and how the main living area looks at the moment. Still cluttered but not in that way that is encroaching on the floor space! I had the brainwave of using the table football as a table-with a piece of felt covered wood on top and it now has the first dolls house on it, ready to be played with. 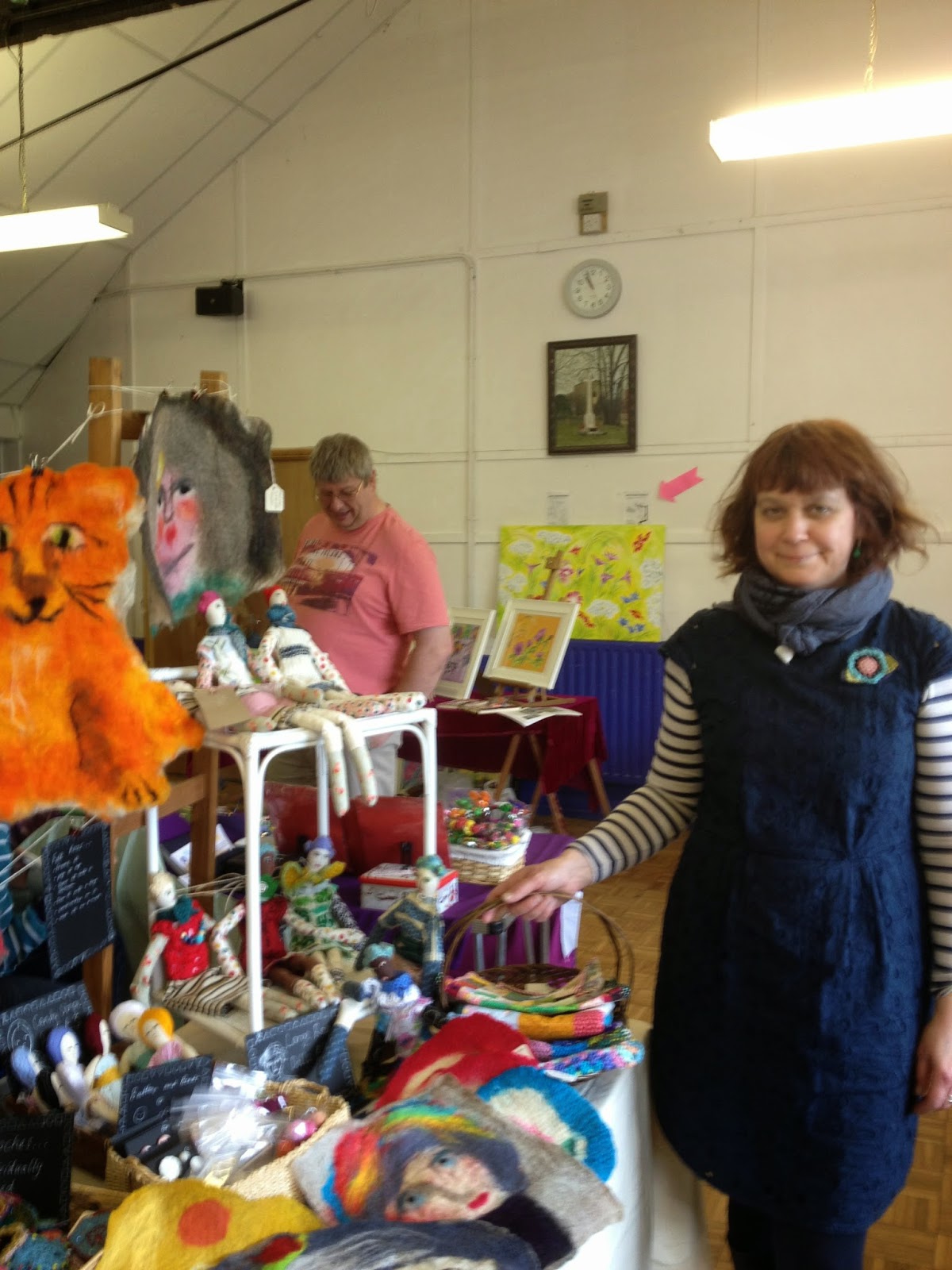 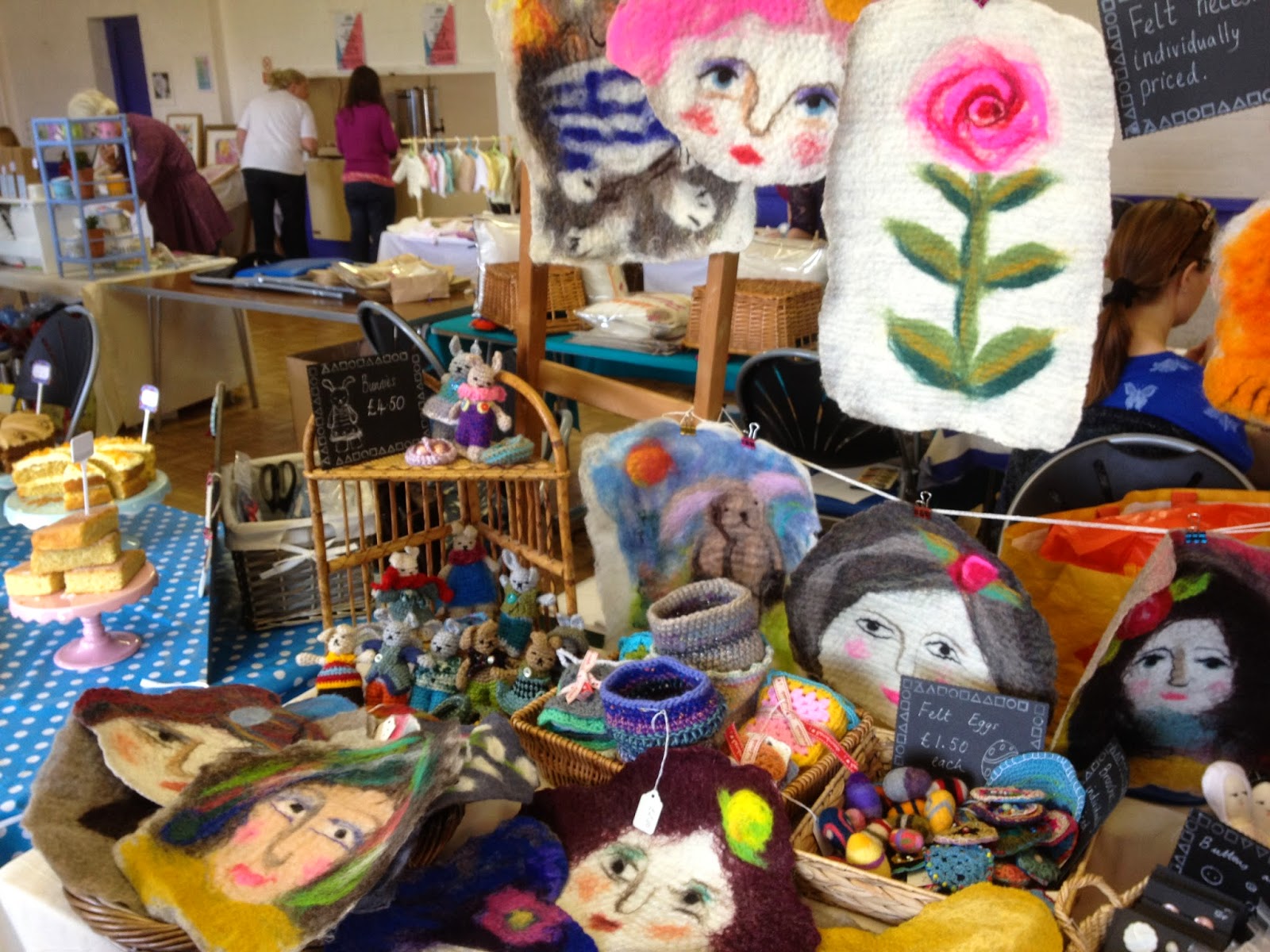 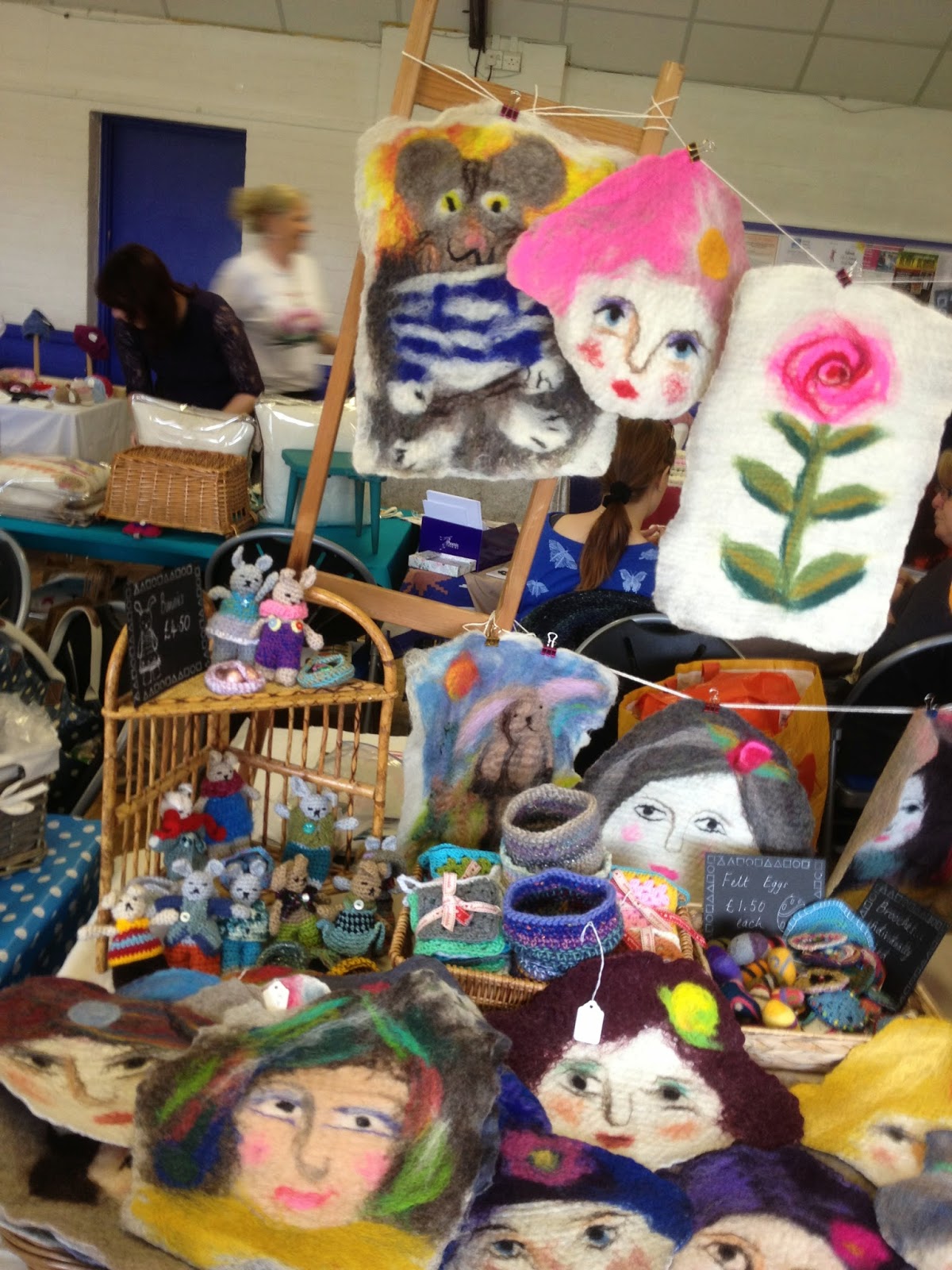 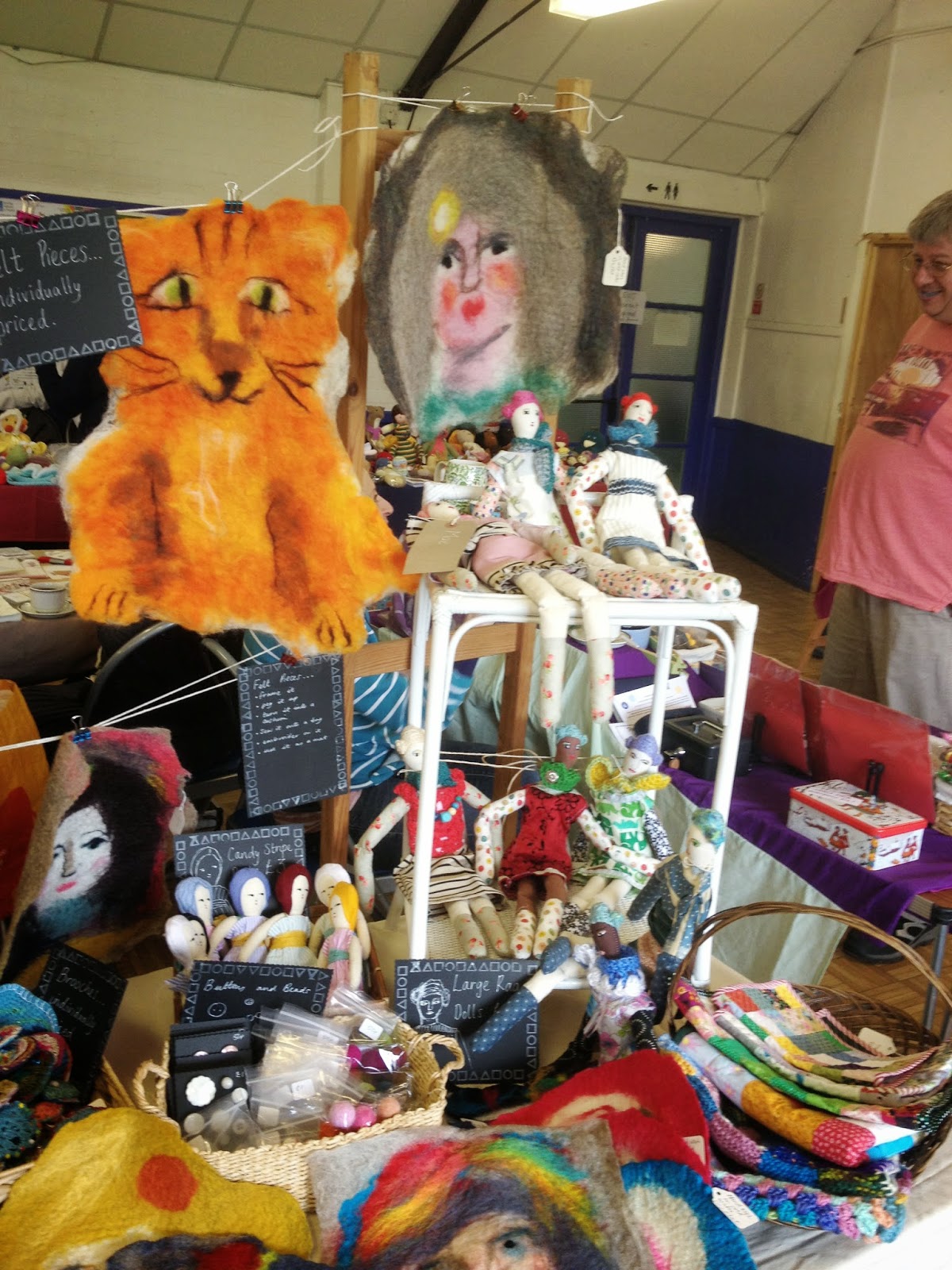 Your felt pieces look very impressive- unusual and eye-catching. It's obvious that you've been very hard at work on them. What a shame that there were not many visitors. The other stall holders sound nice. Will you do it again?

These are wonderful and what a lot of work!

Thanks Lynne and Janine. I think I will try to do another one at some point Lynne but look more carefully at where.

Hi Sarah,
How disappointing for you but I think you hit the nail on the head in your comment above....."look more carefully at WHERE". I've had the same experience while participating in fairs/shows I and I know how much heart and soul went into your pieces. Your work is wonderful.
As my Poppa would say... "chin up, there's always next time"

I absolutely LOVE your felties. They are superb! Just the wrong market, clearly! Love the look of your booth, also!

A little late to the party, but I just wanted to say that your stall looked great - sorry to hear that you didn't sell more. I've only done one craft fair, years ago, selling handmade paper. I think I made $4. Craft shows are a gamble. You never know if the people who come through the door will be the right fit for your crafts.

I also wanted to say that I really like your outfit! And your haircut, which reminds me a bit of Ramona Quimby (maybe that's too American a reference? She's a little girl from a series of classic children's books by Beverly Cleary - is she known in the UK?). Ramona was a childhood favorite of mine. She's been updated in current editions but her hair always kind of sticks to Robert Darling's original illustrations.

Thanks Lisa! I have not heard of that character but I will look her up now that you have told me about her!