It has been a busy few days! The opening ceremony on Friday night started the weekend off well-I loved it! Then on Saturday morning we were up early to walk across the heath to Greenwich Park. We were helped on our way by a soldier who told us the nearest entrance, then we were greeted at various points by happy smiling people-volunteers and more soldiers. We wandered through the park, a totally changed environment with fences and jumps, and the giant arena at the bottom. It was strange to be somewhere so familiar yet unfamiliar. We were there early, so had time for some breakfast before going in to see the dressage. I know what dressage is of course, but had never taken a huge interest in it, and avoided having a go when I was on a riding holiday aged 10, as I thought I would not be able to do it. We were pleasantly surprised at how enjoyable the whole thing was. We soon got into the scoring and technical terms and began to think we knew what to look for. It was only on Sunday when watching the second day of dressage that I began to understand a little more about the different movements the horse does-basically walk, trot and canter, but either collected or extended. I loved seeing them do the extended trot, and a lovely movement where they trot on the diagonal with their legs crossing over. The move I like the best is when they change their leading leg in the air-a flying change I think that is called. All the horses and riders were amazing, whatever their scores. Horses are such beautiful creatures and such a pleasure to watch. I make no apologies for the amount of pictures here-I took so many! My trusty zoom lens came in handy as we were sitting at the very top left hand back corner of the arena. It was a great seat as we had a view of the riders entering and leaving the arena, which added interest and many more pictures! 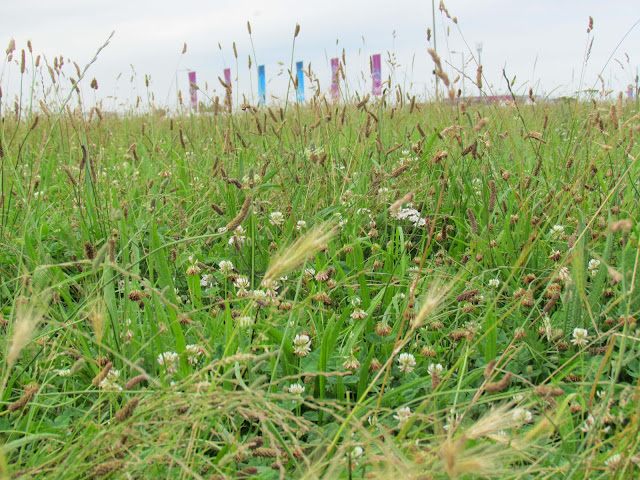 Olympic flags seen through the clover on Blackheath. 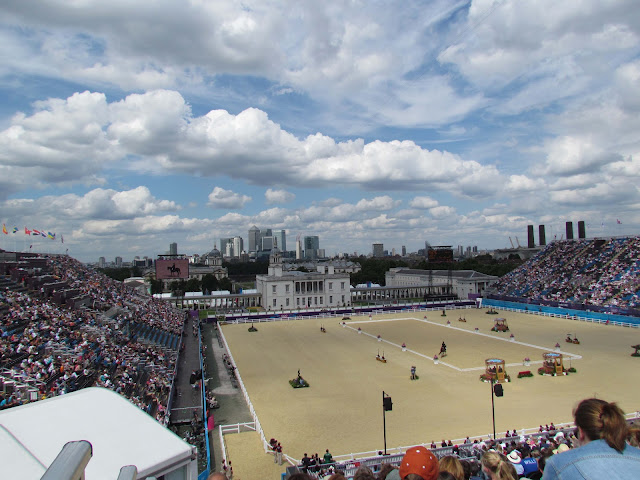 Just look at the view! The weather stayed dry on Saturday, though it did not on Sunday, and one of the British riders rode in torrential rain and did really well! 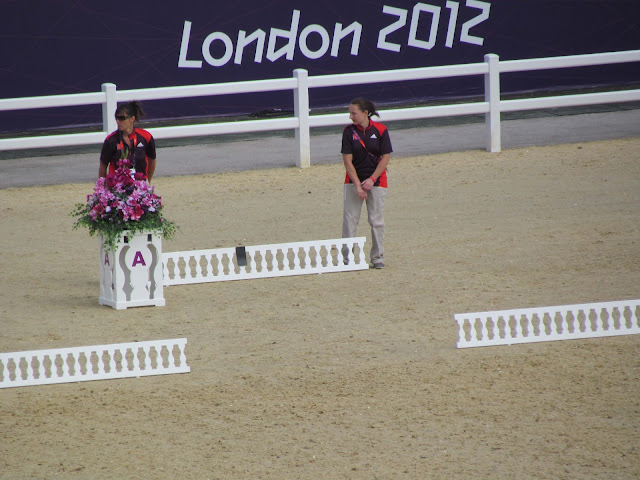 A bell rings, the little fence is moved back, and the riders then have 45 seconds to enter the dressage area. They ride around the outside of the area before this. 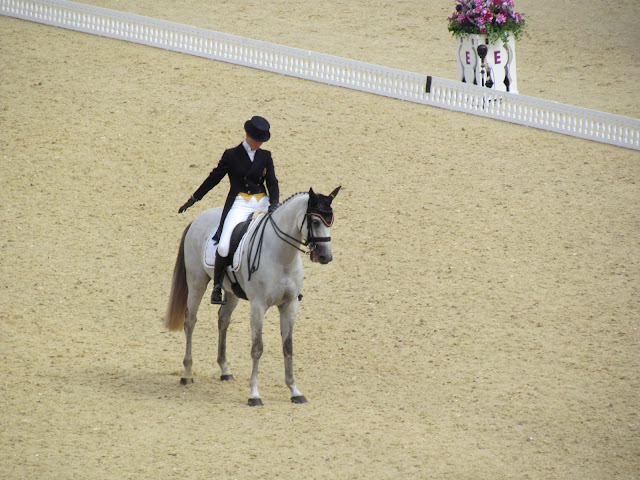 I loved the part where they did their little bow to the judges. This is one of the moves they are marked on-the horse must be perfectly still for this. 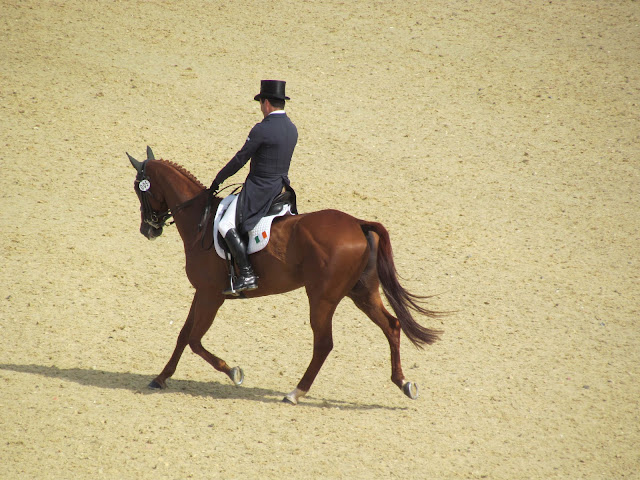 This horse is doing the extended trot I think. 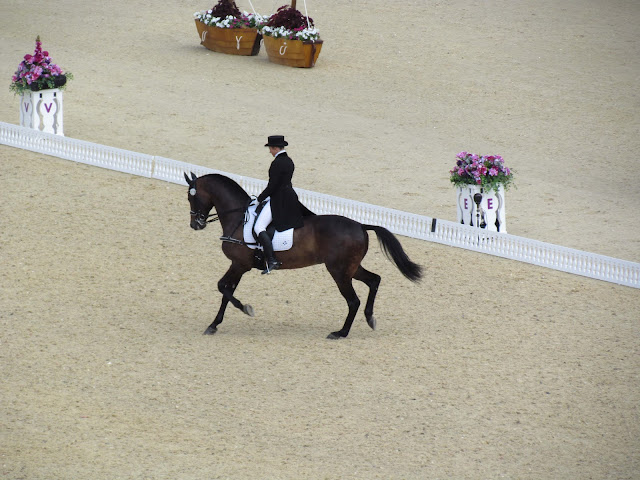 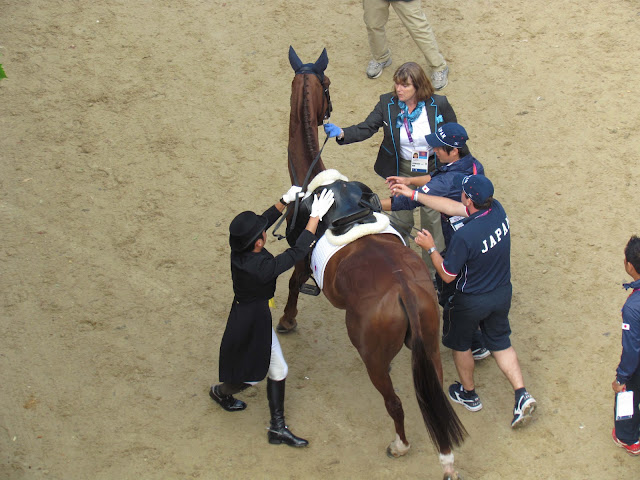 One of the Japanese riders just after dismounting. 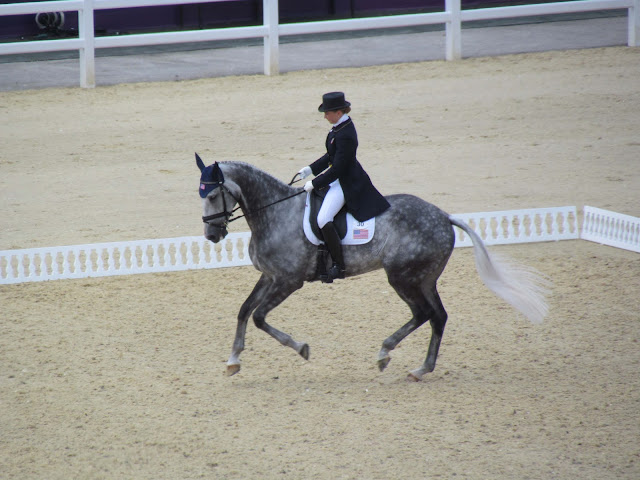 I think this horse is doing a collected canter. The horse is Ringwood Magister, ridden by Tina Coudray for the USA. The horses follow a route involving lots of turns. They go perilously close to the little fence. 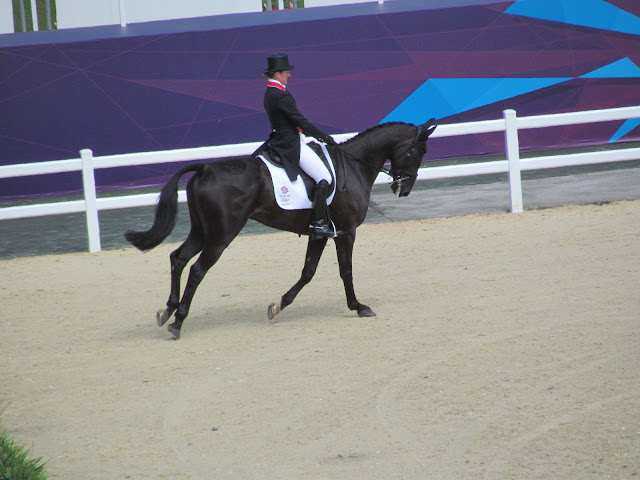 This is Nicola Wilson of team GB on Opposition Buzz. 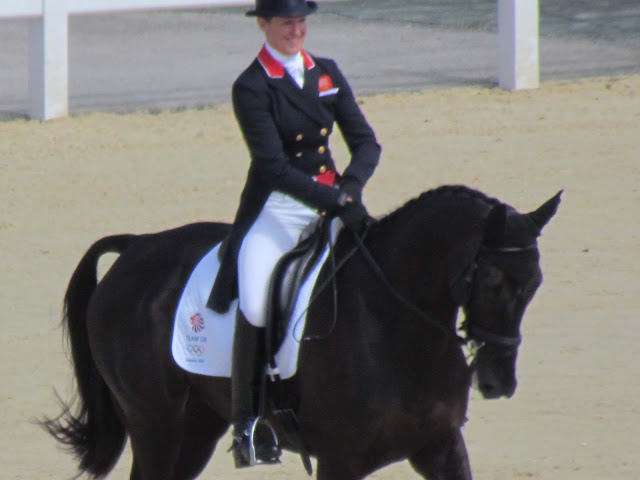 When he went out of the arena he had some fans waiting, so he went over for a little chat! 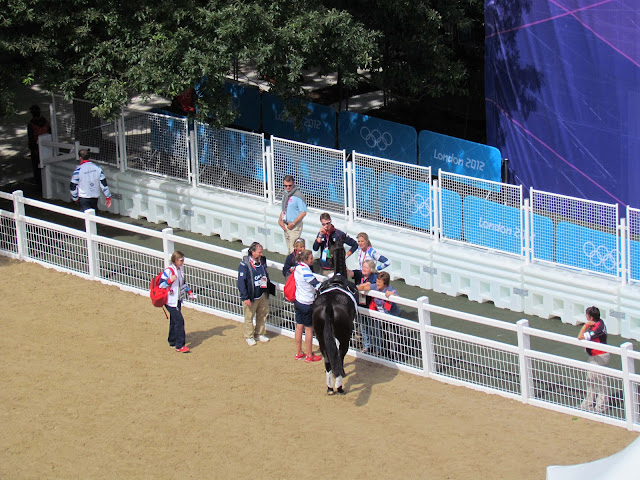 This is Mary King from the British team. This is her fifth Olympics! I was very impressed by the amount of older riders in this sport-the ages ranged rom 20 to 53. No ageism in Equestrian Eventing! 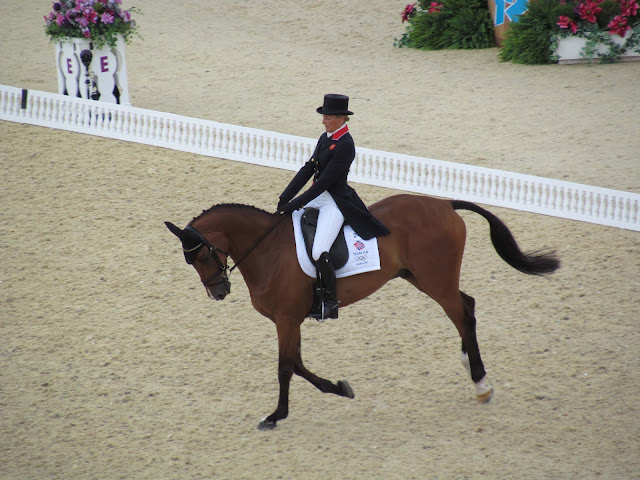 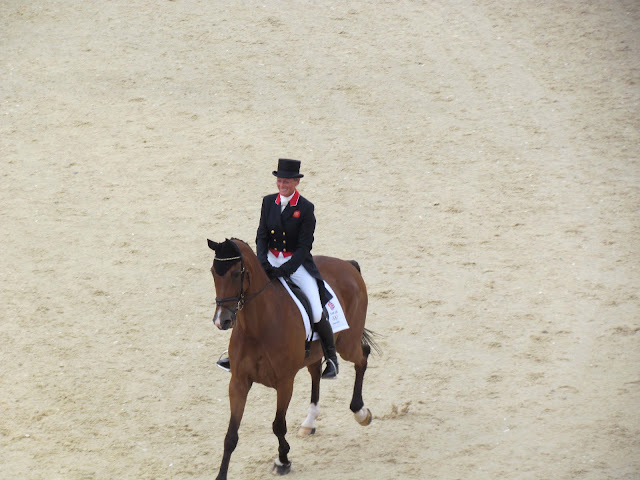 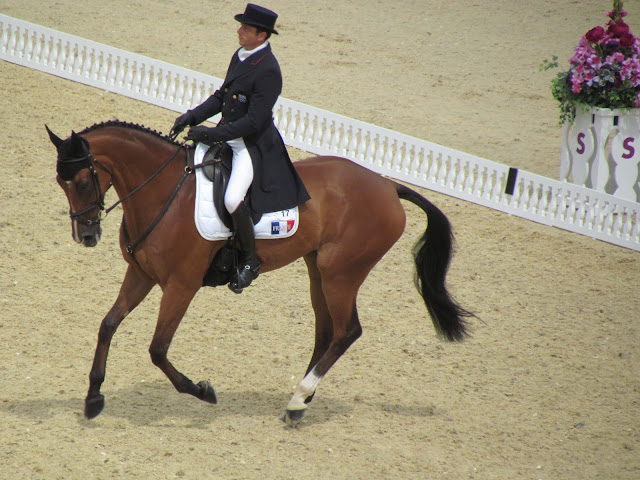 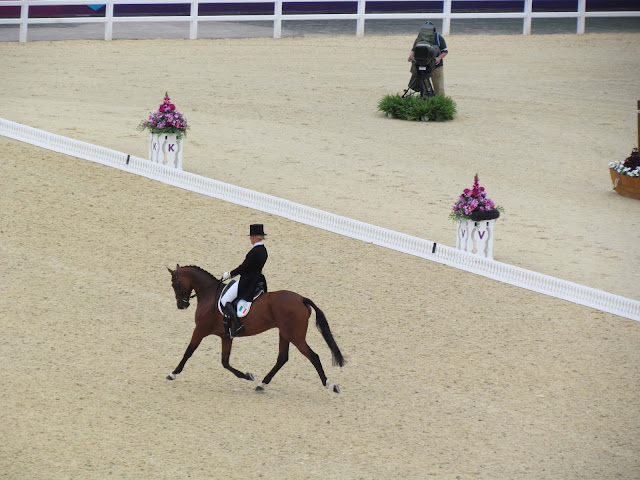 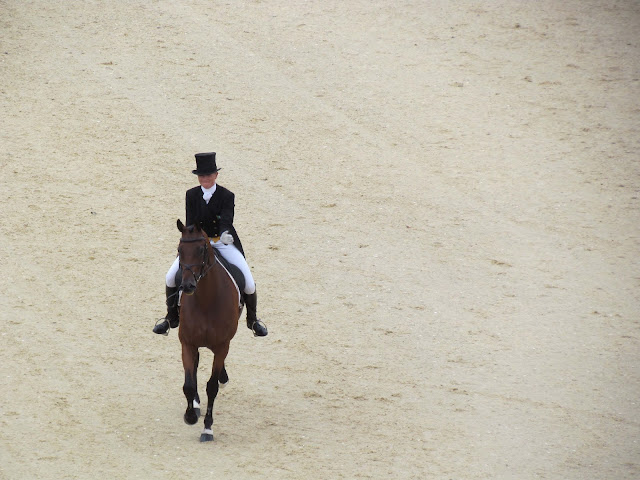 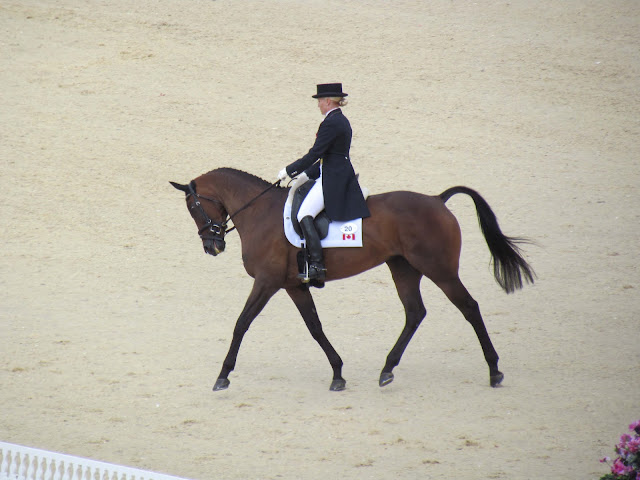 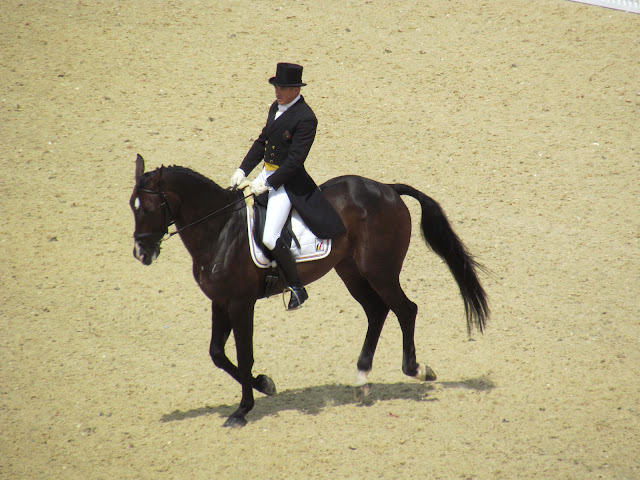 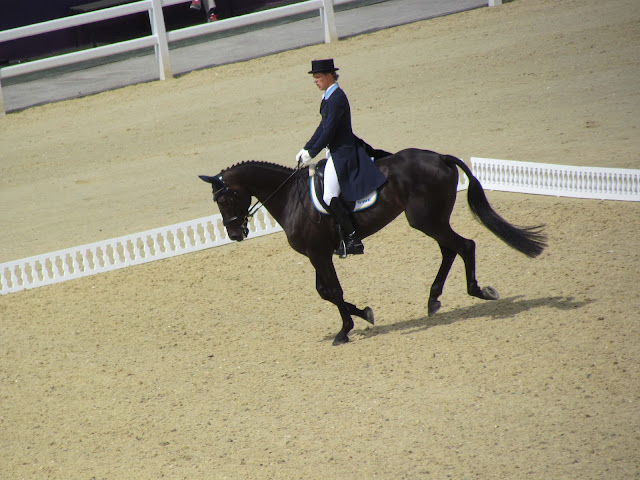 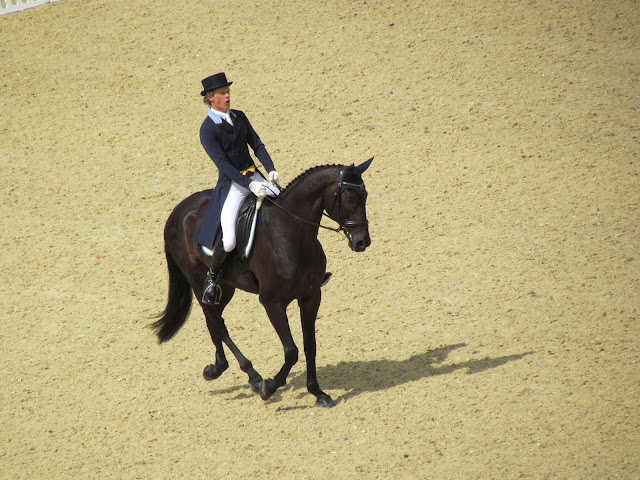 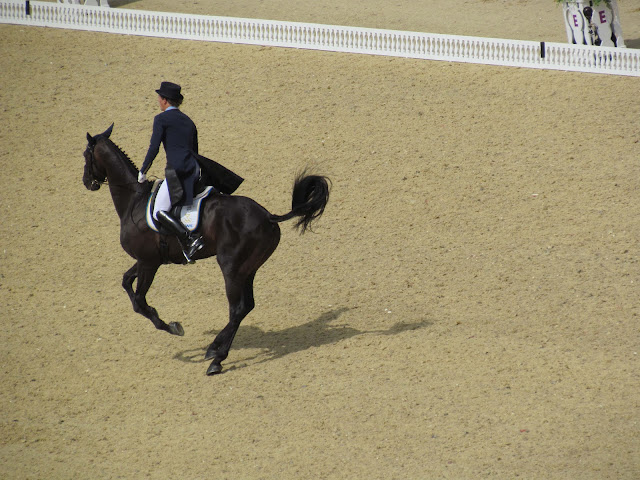 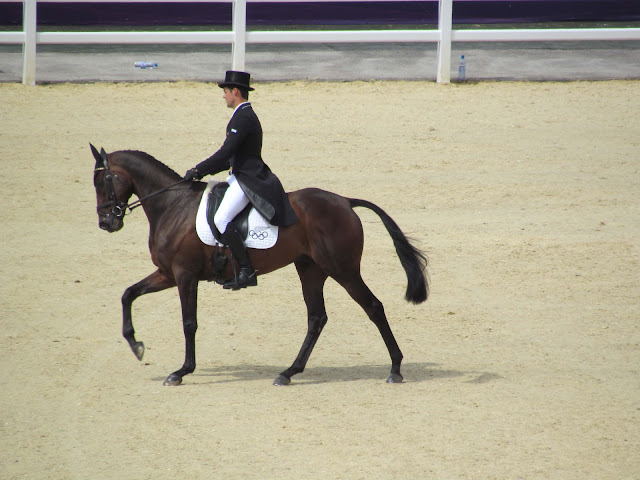 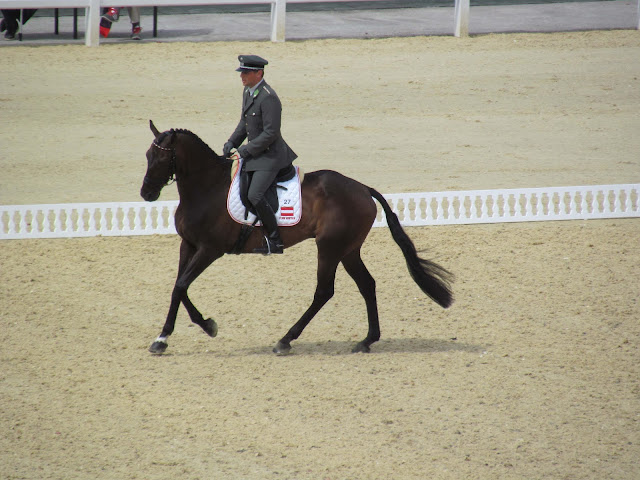 I say it has been a busy few days, as I have been glued to the telly watching the rest of the eventing. The second day of dressage on Sunday, the cross-country yesterday-thrilling, scary and amazing, and the show jumping today! You probably already know, but just in case you don't-Germany got gold in the team event, GB got silver and New Zealand got bronze. The individual eventing gold was won by Michael Jung of Germany (and today is his birthday too!), the silver by Sara Algotsonn Ostholt of Sweden and the bronze by Sandra Auffarth of Germany. The medal ceremony was lovely and I felt quite emotionally involved with the whole thing! The Princess Royal presented the team medals, giving one to her daughter Zara Philips-who was riding in her first Olympics on a beautifully named horse-High Kingdom. 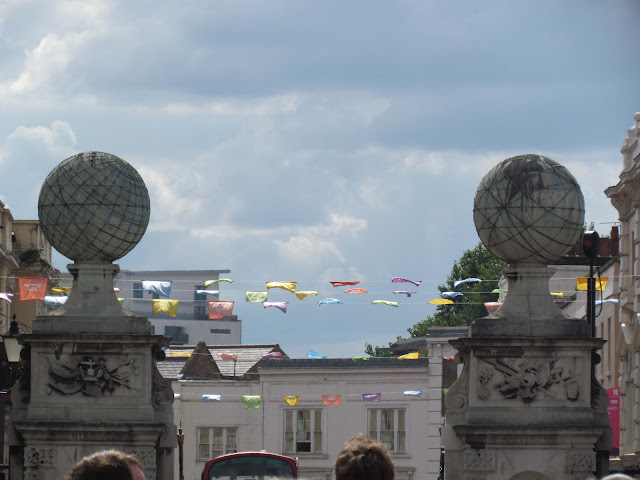 As we left the park and went into Greenwich, the sun was shining and catching the flags. The Cutty Sark sailed on a bed of wild flowers and we enjoyed our sandwiches before going home to have a long nap! 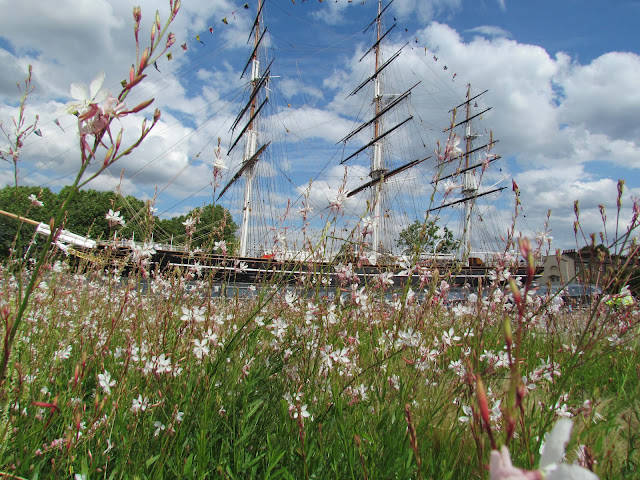 There is more Equestrian sport to come I am happy to say! Although it is not as good as being there, it is not bad sitting on my sofa crocheting, drinking coffee and watching horses!
Medal table so far.
Information on dressage.
Posted by Sarah at 13:27

There is something wonderful about watching beautiful horses and their riders, better than many other sports IMHO

Oh, Sarah, you got some fabulous shots. How lovely to be there and soak up the atmosphere. The horses are so beautiful, aren't they, and strong and fit, too. Wonderful:-)

True Jenny! Thanks Janice-it was lovely to be there!

That is fabulous Sarah- so glad you got to go! Loving all of your photos! Over and over again! Thank you.

SO JEALOUS!!! Of all the events--I think that would be one I'd love to attend. Even over the headliners like swimming and bike racing I'd put horses on the top of my list. Thanks so much for your fine photos. Those horses are such excellent athletes. Beautiful moves and such classy riders. Wow!

Terrific shots Sarah! Lucky you!
The horses and their riders are so handsome. I've been watching some of the same events on tv. Nice to think you're doing the same. Enjoy!

I watched the end of the show-jumping yesterday - I had to keep stopping sewing, in case I sewed over my fingers while cncentrating on the tv!! The horses look fabulous and the riders look so smart - although I don'tlike their safety helmets - one of the commentators asked what was wrong with the traditional ones!
We also saw the highlights of the British women's football team beating the Brazilians - so much better then the men's games!!

What FUN... and what wonderful images, Sarah! We've not watched much of the Games so far on TV, and they've showed none of the Equestrian events so far, which is a pity for I find it very interesting. So great to see here! :o) Happy Days ((HUGS))

you are at the olympics!? so so so jealous!

The horses were beautiful but you saved the best for last. Sailing on wild flowers was amazing!

Brilliant photos Sarah! I'm gad you had such a lovely time x