Fred Bear was threadbare and eaten by moths. Now he is patched up and feeling quite smart. He was knitted by a lady called Fifi, whose husband worked with Andy's Dad, and Andy says he didn't like him when he was little, mainly because of his purple bow. Andy's Mum called him Fred, because he was made of threads. Fred has been around for years, and at some point, the moths got him and chewed eight holes in him. I think he is made of pure wool, which the moths love of course.  I managed to find a yarn that matched his colour pretty well, which is hard when buying online as the photos are not always true to the colour. I knitted patches, put them under the holes, then darned the edges to the patch to blend them as best I could. Originally he was stuffed with cut up tights or stockings, which were his kind of colour, so didn't show through the holes in the fabric. I used polyfill, so only stuffed him lightly. He has a smart black bow to match his features, which, remarkably, survived the moth attack! 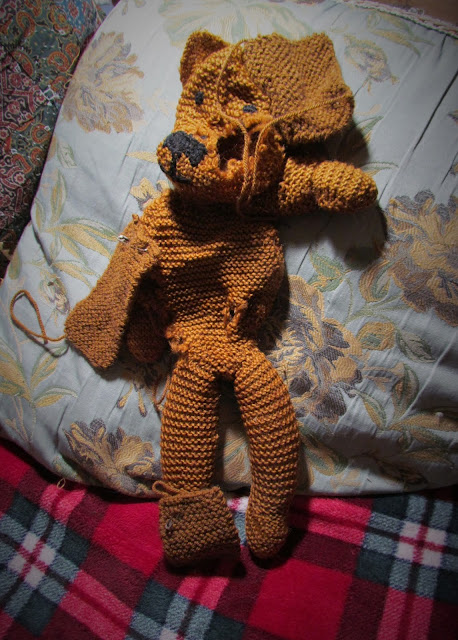 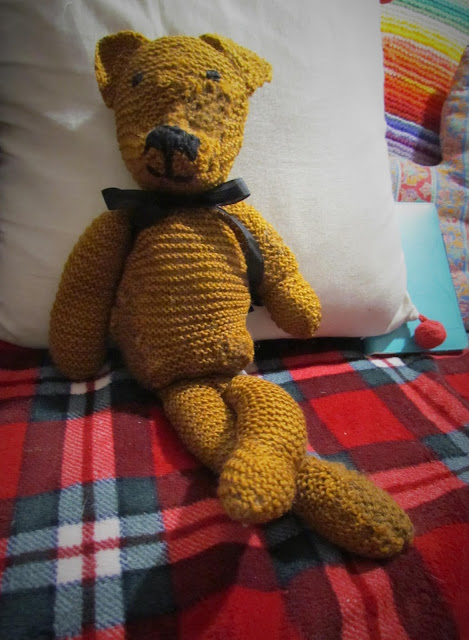 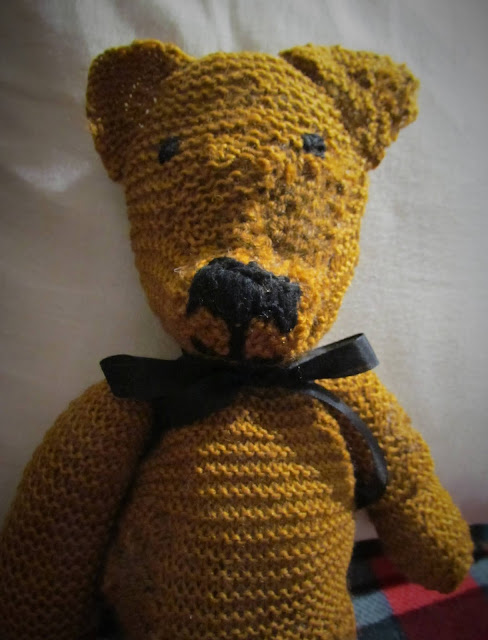 I was going to post this on Thursday but blogger wouldn't let me upload any photos. After signing out then in it let me today. It is a year since my Mum died, which does not seem possible. I miss her so much, and still can't believe it is true. Am I still in the denial stage? Who knows but I feel she is still with me in some way. I think she would have approved of Fred and his repairs! I need to do Mickey next. He is my childhood toy who I still have and he is in a bad state too. His leg is falling off. Nursery nurses or Early Years Practitioners as they are now known, seem to universally ask the question of children who have had a minor scrape, if their leg/finger/arm etc will fall off, which makes them laugh and distracts them from their upset. I don't think Mickey would laugh though as his leg actually is falling off. Mum and Nana, her Mum, often repaired Mickey over the years, so he does not look at all like he did when young, and I need to carry on that tradition!

Bravo for resurrecting Fred! He looks quite jaunty!

"Fred" means Peace - He looks very good and happy. Such a fine job you have done on him, I think you may have missed your calling- plastic surgeon, would have been brilliant!
I never think of your Mum being gone from this dimension...I think that I will come to see you and we will go out with her for tea. I can not grasp "gone". She is not.

Moths are not our friends! I do not hesitate to squish them.

Fred looks wonderful and I am sure he is much happier now.

A year since your mum died... I am so sorry.
She and her mum mended Mickey, and you continue the work of mending worn toys --bringing a bit of refreshment to our weary world.

Fred looks terrific! The wool matches very well---I like that it's not the most perfect match because then you can see the work, the layers of history and love.
(Well... moths aren't love, though they do love wool!)

A copy of "Mudlark" got donated to the store this week--I learned about that book through you.
I'd bought a new copy for a friend, and now I can read this one myself.

You made Fred come alive again. I know you must miss your mom so much.
I would feel the same way.