January and February are always the hardest months of the year to get through. Let alone with all that is going on in the world. I have been feeling tired, miserable and a little ill this week, but this weekend I have begun to feel slightly better. I have started taking vitamin D so wonder if it is having an effect. I had to do one of those lateral flow tests this week, which have just become available at school. You don't have to do them, and I was undecided, but then I got a rash on my arm, and Andy told me that can be a covid symptom. I rang the NHS testing line but you can't book a test if you don't have one of the three main symptoms, so they advised that I use a lateral flow test from school. I haven't had any  kind of test so far, but have often thought it looks unpleasant having the swab in your throat and nose. It is! I didn't have a mirror, but managed to swab my tonsils without touching the inside of my mouth. It made me gag, so then I did the nostril, which made me sneeze. After that it was a relaxing half hour sitting in the medical room at school to see whether I could go on to work that day or go home and book a proper test. It came out negative so that was a relief. You have to report your result to the NHS which turned out to be a bit of a long winded process. Then they helpfully emailed and texted me to let me know the result which I had just let them know. Now I have to do them twice a week.

Last week, in an effort to cheer myself up, I decided to buy a slide projector, as I have lots of Mum's slides. I looked at many on eBay, and, although I wanted one of those carousel ones, I thought they have more parts that could go wrong, so I went for one that has a sliding section which holds two slides. It is an old one, probably from the sixties or seventies, but works ok. It has a noisy whirring fan, and gets hot very quickly, but I have managed to look at quite a few slides so far. I also got a slide viewer which is new-just a magnifier with a light, so I can look at more in there. The projector is more fun though. Here are a few of my finds so far... 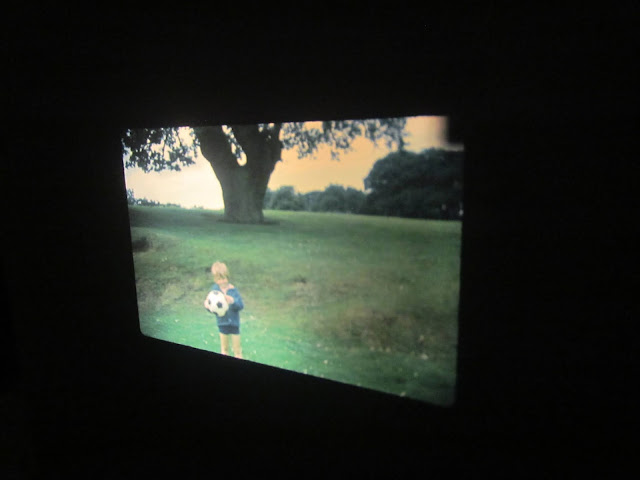 My brother in an unknown location. 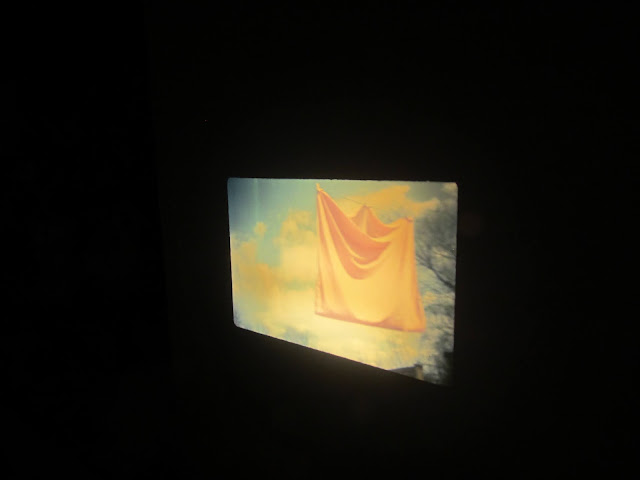 A pink sheet against a blue sky. Not sure where it was taken or who took it but I appreciate their choice of subject. 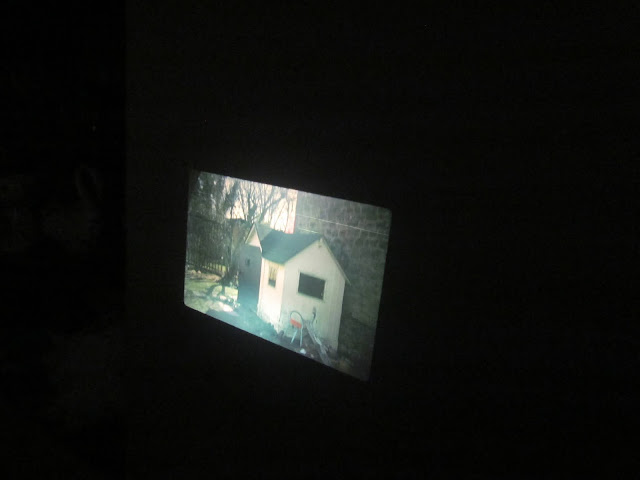 The Wendy house my Dad built for us when we were little. Had to look up why it was called that-it never occurred to me to wonder before. -"Wendy was injured soon after her arrival in Never-land so Peter Pan and the lost boys built a small house around her where she had fallen. Thus we are given the phrase “Wendy House”. J M Barrie himself designed the first Wendy House for the first production of the play in 1904." Source here. 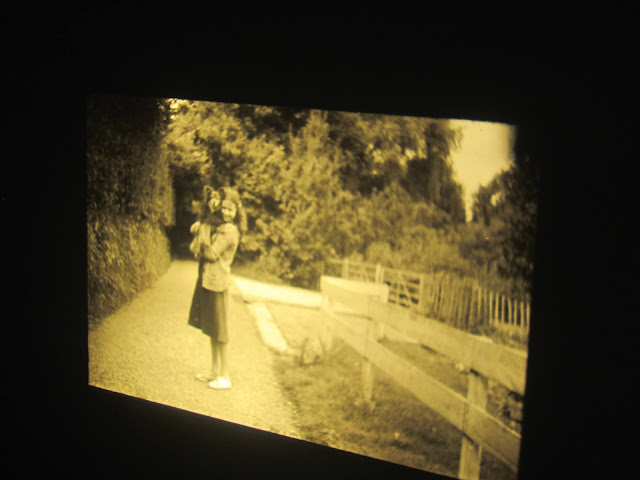 Me and my dog Tramp. I found him as a stray living in our garden when I was three. You might not choose to call a dog Tramp now, but it was the sixties. He was a lovely dog. he was a mix of something and Papillon, and was a reddish brown. Mum and Dad thought he was a fox at first. 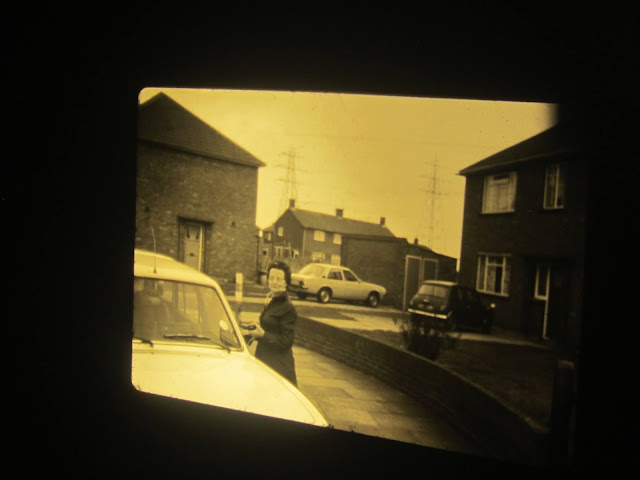 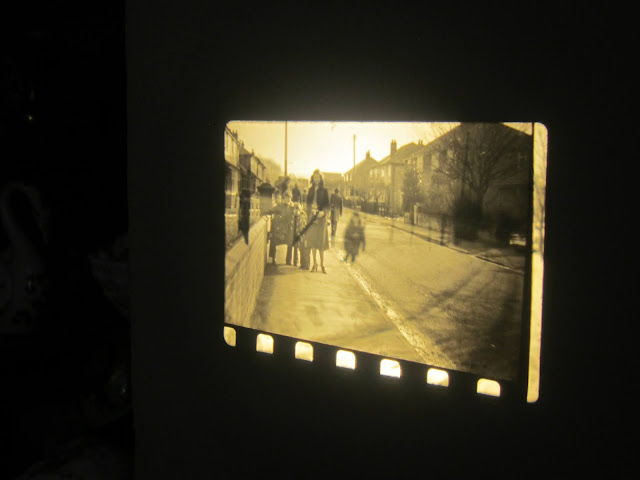 I don't know who these people are, but I love the ghost child on the right of what must be a double exposure. 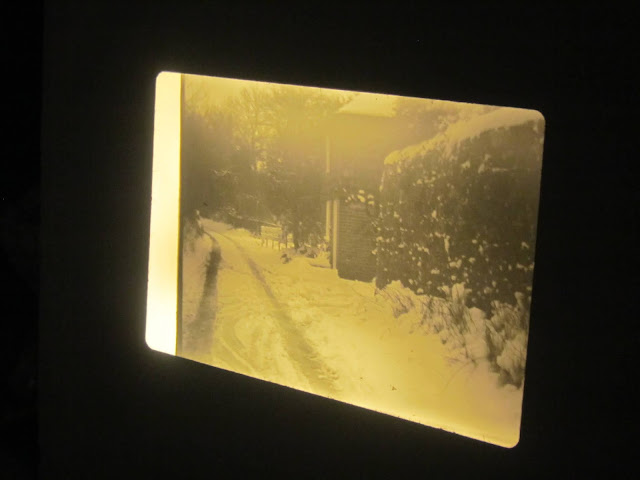 The cottage we used to live in, on a snowy day. 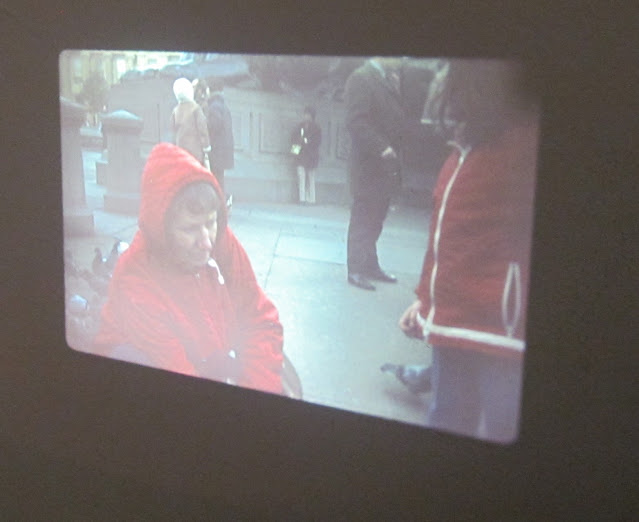 A trip to London of which I have no memory. We were all dressed in red and are feeding the pigeons in Trafalgar Square. 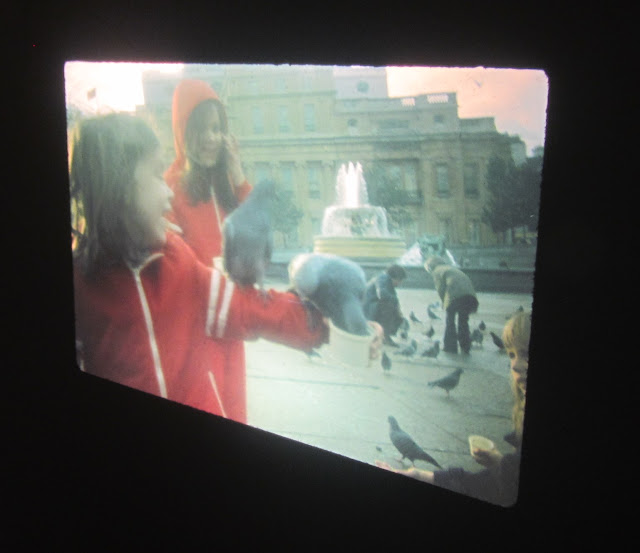 I love these pictures. 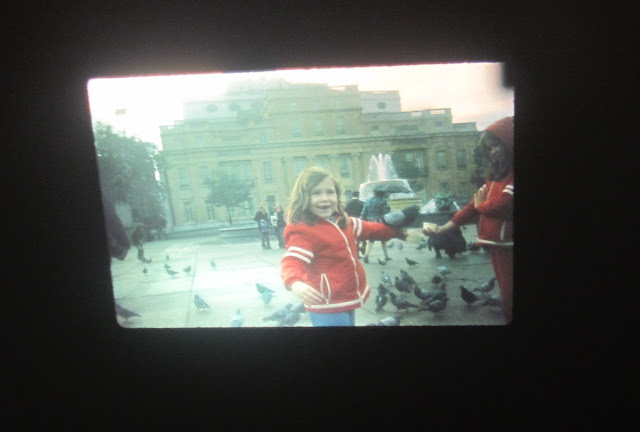 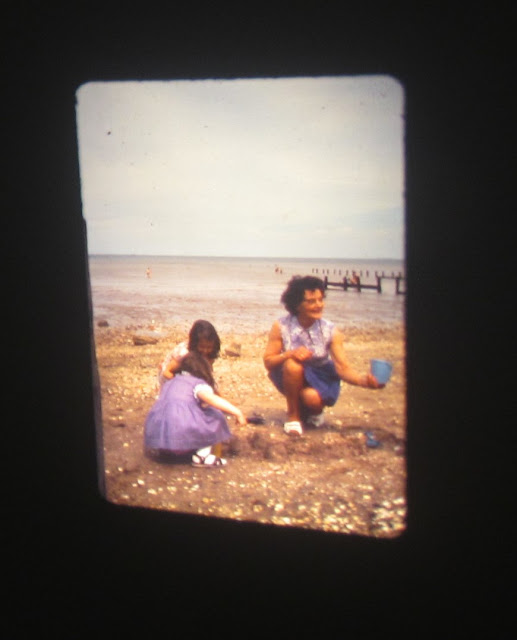 Nana again, with my sister Jane in purple and me behind. This is probably on Sheppey. 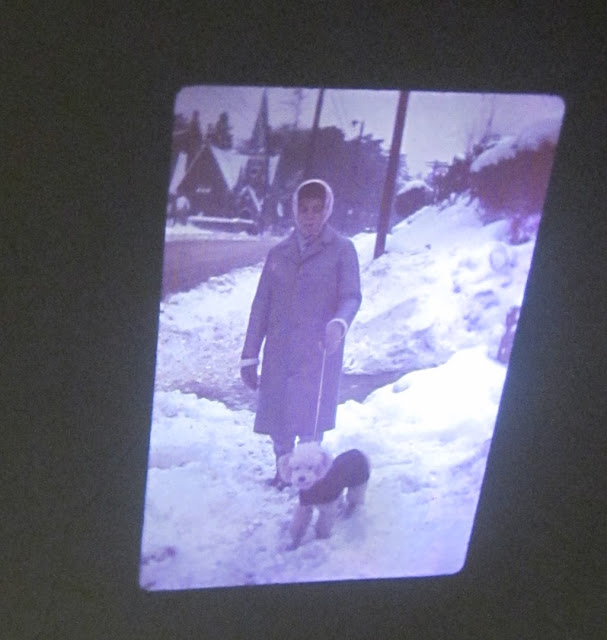 I don't know who this lady in the snow with her little poodle is, but I like the photo. That's a lot of snow! 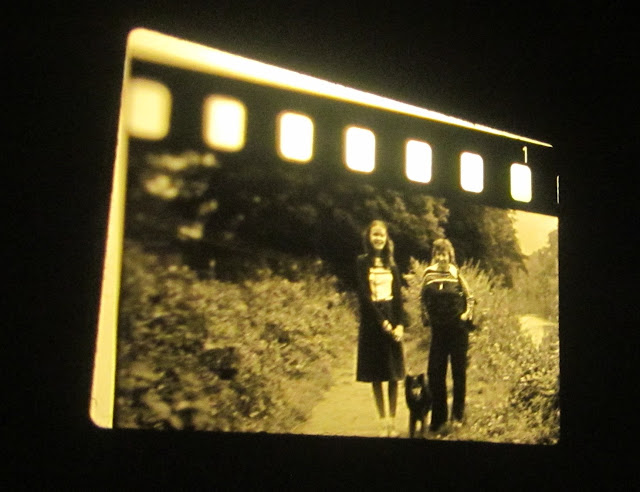 Me, Mum and Tramp on a walk. It might be on a holiday that we went on after my Mum and Dad got divorced. It was in Norfolk. It is a happy photo anyway, taken by my brother I think, and according to the name on the slide box.

I'm sorry you've been tired, miserable and a little ill, but I'm glad to hear you don't have the Big C (C for Covid these days).
Yes, thank-goodness January is over. I was just feeling that it was interminable myself... I
feel a small lift, now we've rounded the corner into February--I hope you life lifts a bit too.
Tbis winter has been (is being) a long slog, isn't it?

Meanwhile, those slides are fantastic! So evocative, they seem both faded and bright with light. And a lot of love and happiness shine through . . . as well as mystery!
(Ghost child! The sheet seemingly hovering in the sky!)
Thanks for sharing.

Here's to a nicer February!

I wish I had thought to take my father's slide projector after he died. I did manage to get all of his slides and my mother's slides along with all of their photos. I knew that if my brother took them I'd never see any of them again.

I bought a digital slide scanner to input them into the computer for viewing but a projector would be nice to have to enlarge them.

Thank you for sharing your slides showing glimpses into others lives.

Loving the slides that you posted! Sweet family! Love the sheets on the line too. I hope that you are feeling a bit better today. I reckon January to be a rough month, but then comes February and it is rougher still!! If we make it through February we are out of the woods! I am sleeping a lot. Dream life is the best life at the moment.