Clearing the last photos I meant to share before the year is over... 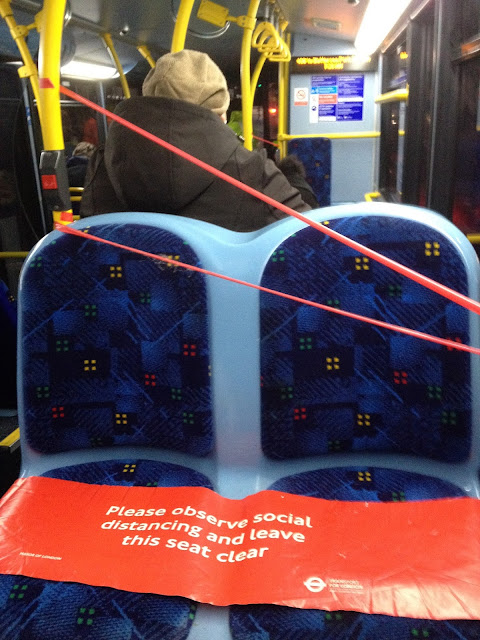 Best seat on the bus-at the back on the bottom deck opposite this seat. More space! Social distancing on buses has always seemed a little difficult so any small gain is good. 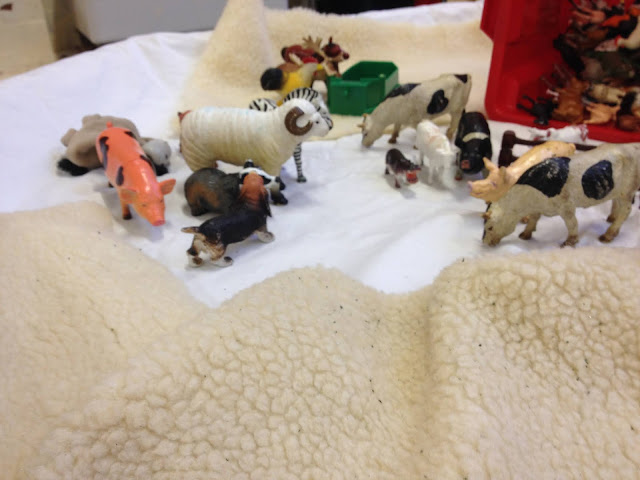 Last week small world table set up by the student in the class. Woolly snow and a farmyard conversation. 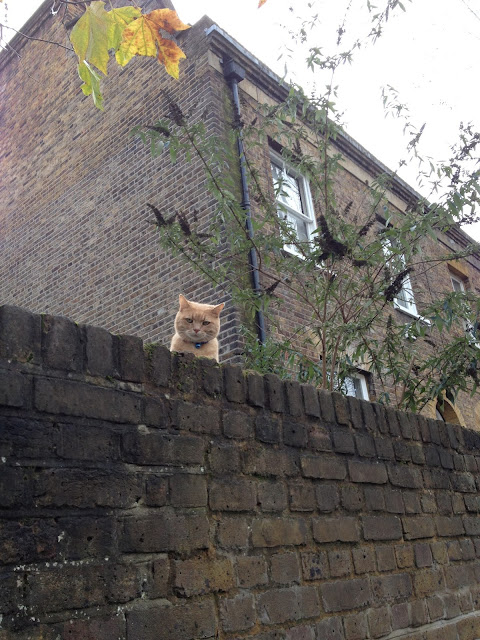 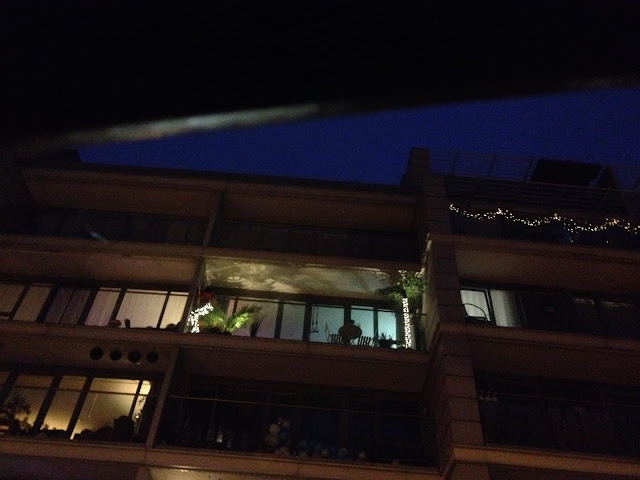 Photo taken from the queue where I eat my leftover sandwiches on the way home from work. It is a queue that can take a while so I have time to eat and am always hungry at that time! I liked the light and shadows from the plants on the ceiling of the balcony. 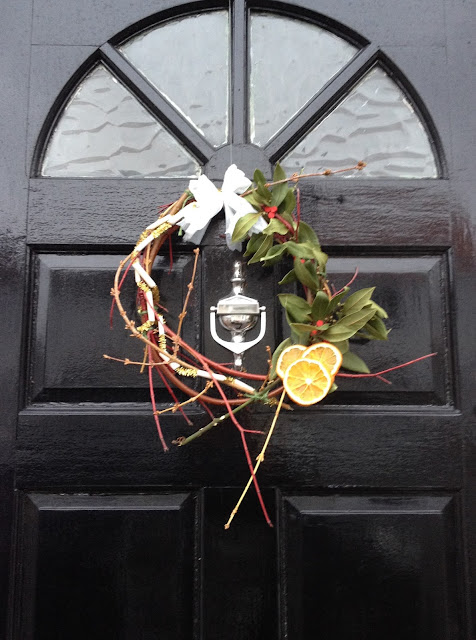 I did hang my wreath on the front door in the end. I made the bow from a plastic bin bag. The bay has curled up but otherwise it lasted quite well. 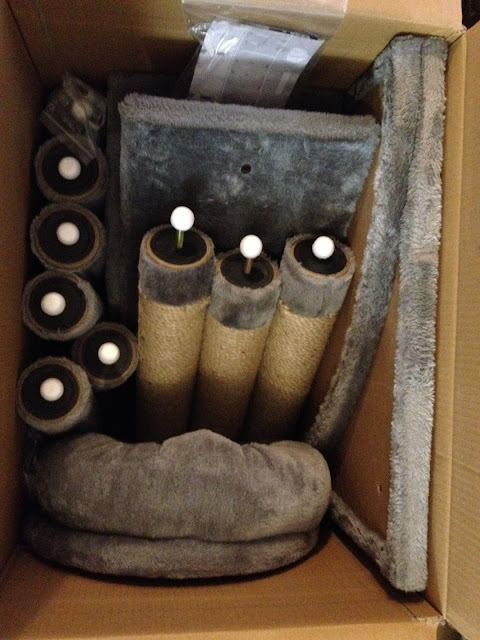 Christmas present for the cats. I tried to put it together myself but was soon very cross with whoever designed it and Andy had to step in. The thought occurred to me during my slight tantrum, that people have sent astronauts to the moon. The contrast between their abilities and mine was stark. To give myself a bit of a break, it was a two person job, to balance the bits that needed to be balanced while the next one was attached. Anyway, Cassie loves it, and Oliver quite likes it now. Lily also got a new simple post one in the bedroom and she loves it, so success! 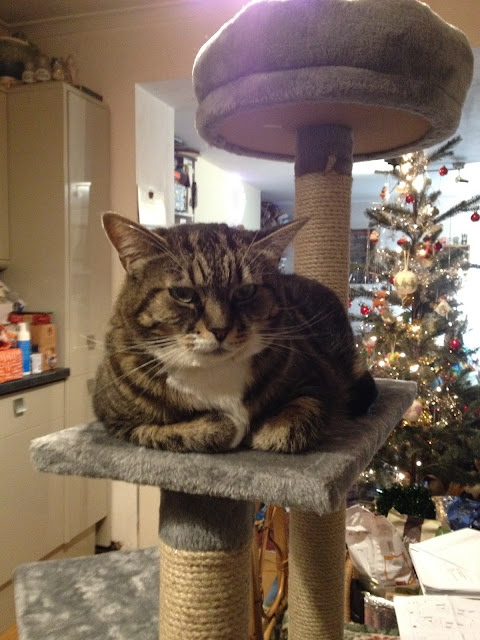 Here is Cassie on tier 4, not in it like most of the country. She won't go on the top part though, I think because she cannot see into it because of the edging. 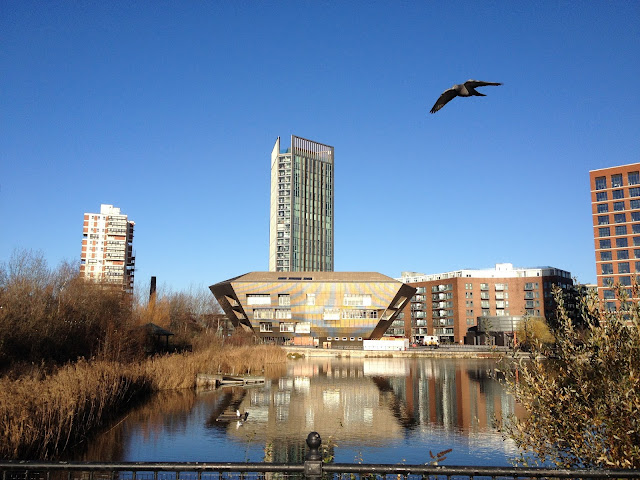 This hexagonal building is at Surrey Quays, where I had to go to meet a fellow cat sitter to pick up some keys. It was a beautiful day. I had to drive to New Cross and get the bus to Peckham later in the week to return the keys to their owner as all cat jobs but one were cancelled. 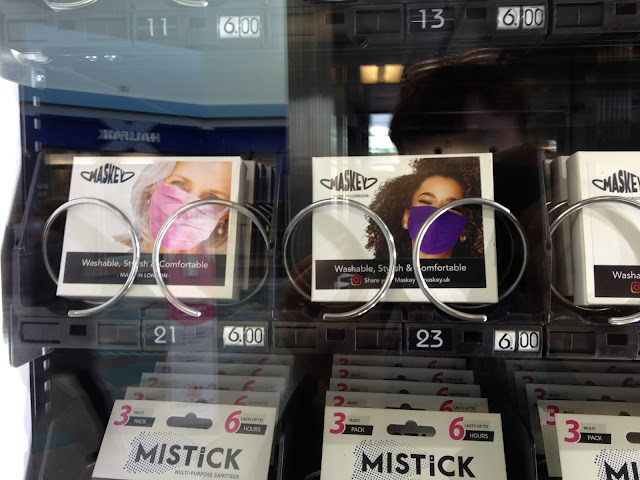 This is a mask dispensing machine I saw in the shopping centre. It shouldn't surprise me but it does when things adapt to the new normal which isn't even new anymore. 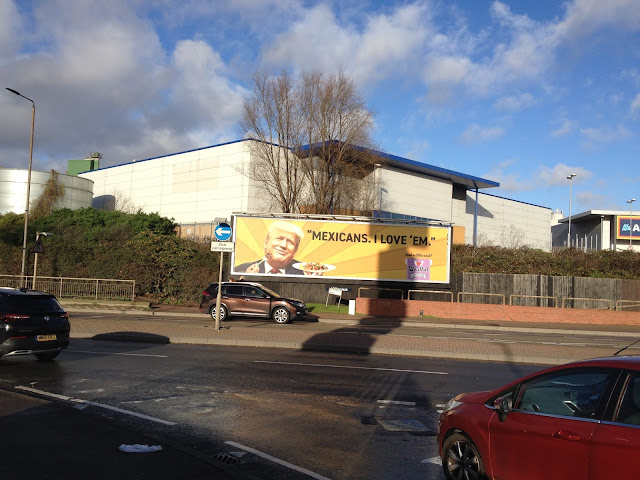 Poster seen when getting the cat tree. 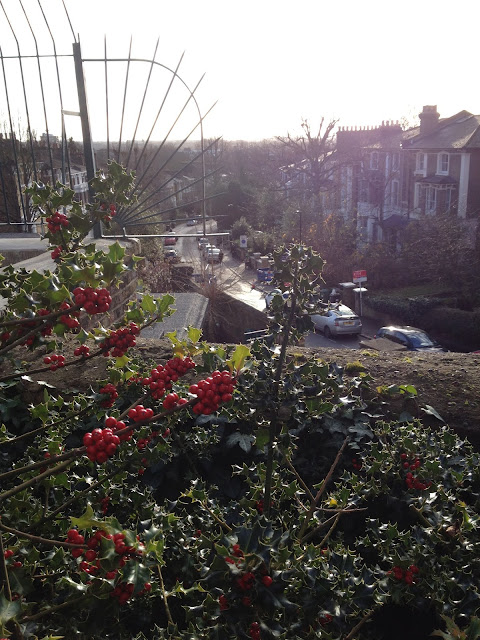 Holly lined view into the street below from a little part of Blackheath I hadn't seen before. Though I have walked up the road below. 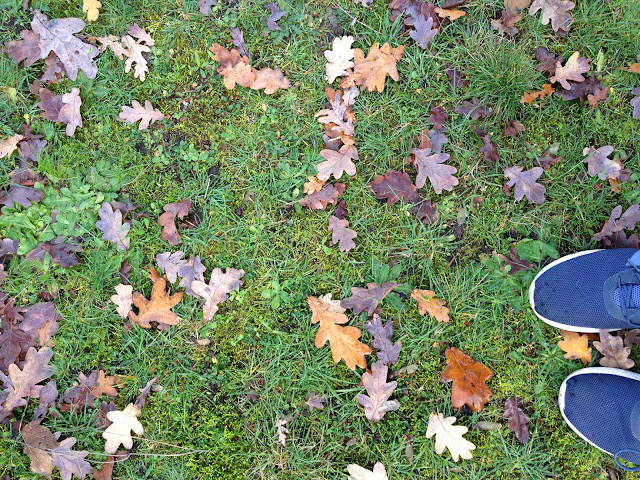 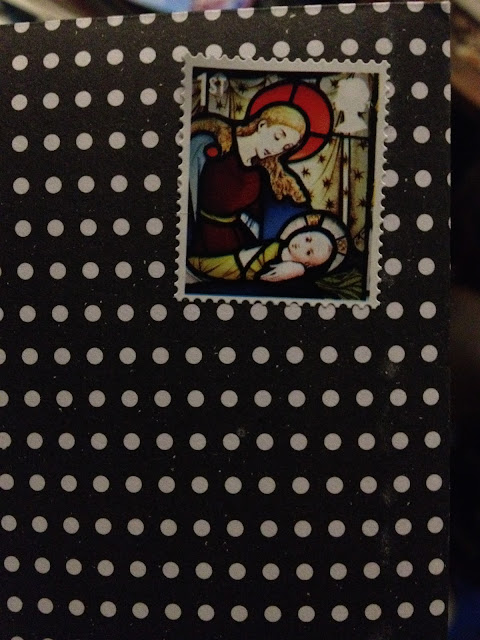 The stamp looked good on the envelope. 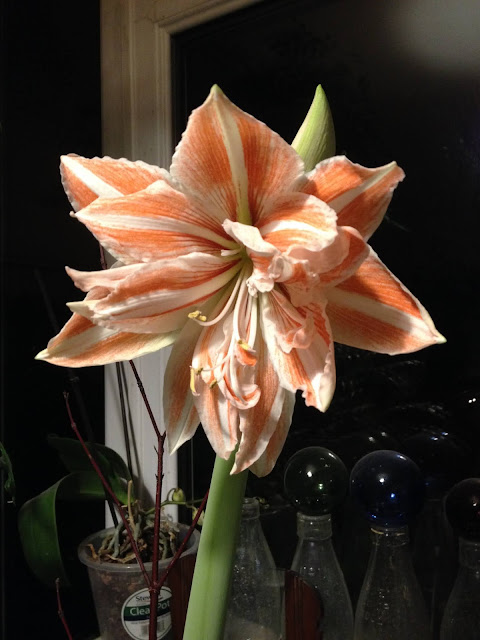 Amazing Amaryllis I got for my birthday. I left it too long to open and plant it, and there were some poor stunted flowers in the box. These died, then it grew again and produced four of these candy striped beauties! 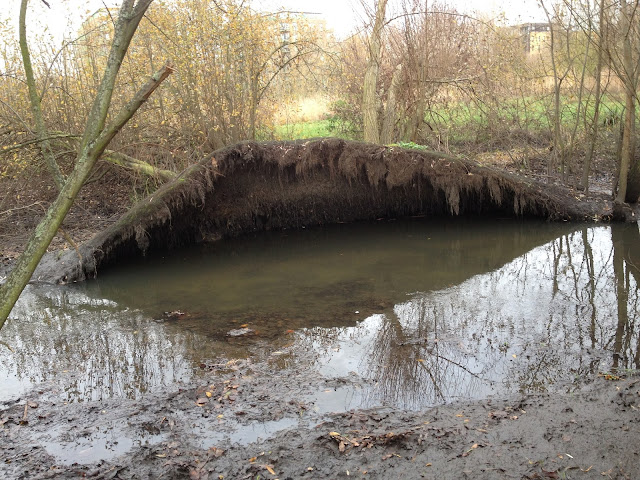 My only cat this Christmas was Barney. Here he is demonstrating what his person called his batman pose! He was very funny and playful and lived near a little park I had not been to before where I saw this fallen tree cave. 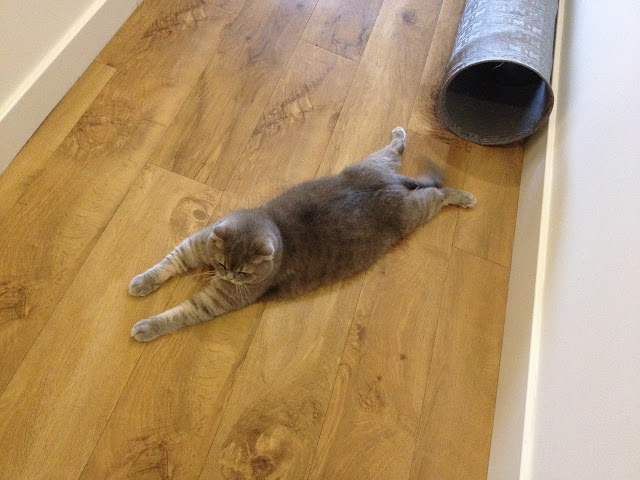 Coconut person from the foreshore last week. I didn't take him home as I thought he was probably happy bobbing around in the river on and off. 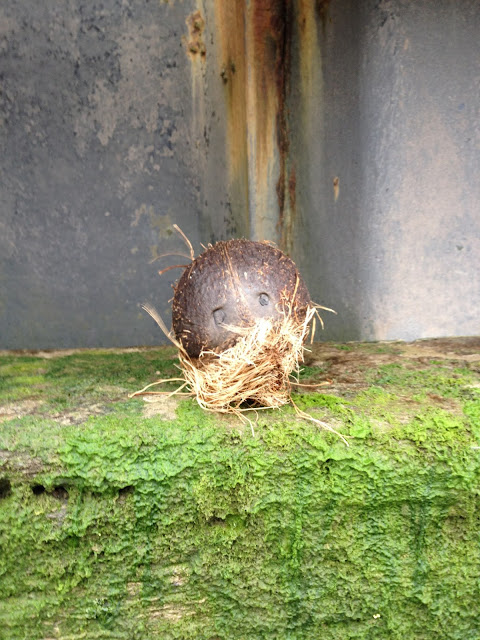 Finally my tree, which is one of the nicest looking trees we have ever had, and I wished my Mum could have seen it. I wasn't going to get one, then I decided to go for plastic everlasting instead of real and soon to die. Ikea came up with the goods. I am going to take it down tomorrow as I don't want to leave that job until next week. Schools in London are mainly closed for the next couple of weeks, but I am going to be going in to work with the children that still come in-those of key workers and vulnerable children. It will be different but it will keep me busy and at least the buses and roads will be quieter. 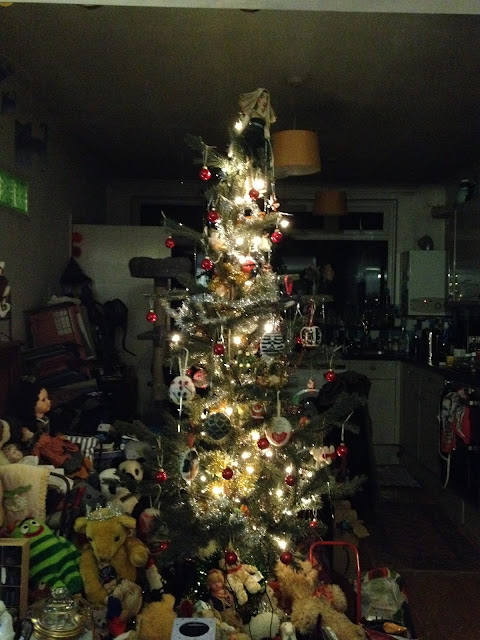 Happy new year to you, and I hope things will get rapidly better as they are not too good at the moment.

Wonderful photos Barney made me laugh, still laughing- I may use him as a screen saver, as well as the orange cat peering down on you. Your tree is very cheerful I hate to see it go back into storage until next year. I am leaving the lights up until they burn out on their own. And so , by now, England's divorce is final- groceries will become less fresh and there will be fewer fruits at the market. Prices will soar- Please, England- surprise us all and make that untrue- maybe take the EU out for a romantic evening and get back together...
The trump sign is hilarious, January 20th - no more orange gas fouling the air...that is our hope. Stay well, love. I LOVE all of these photos!! SO MUCH!

I love your tree and the little coconut person, and the cat tree which is similar to one of mine, on mine the top tier has one open side so cats can see to get in and out, but Lola won't go near the trees anymore, doesn't even go out into the back porch anymore, which I find a bit sad, she used to love the top tier of the tallest tree where she was right up against the shadecloth so could see and smell the outside.

Glad it is not long at least until Trump goes. Andy is stockpiling coffee as he read about shortages to come and we can't run out of that!

Lola sounds a bit like Lily my oldest one. She spends most of her time int eh bedroom where she has everyrthing she needs within easy reach. We bring her out and she eats cat nip and has a buttery plate, and she yowls if she needs us and we are out here but it is sad how little she does now. Though she still has a good old scratch on her post and swipes at Oliver if he gets too close!

The cat snaps made me laugh---the one staring you down and the Batman pose.

Our casual snaps around our cities are really historical documents. The masks in a vending machine, for instance.
I imagine one day that will be a thing of the past?
Or not--I personally wish we'd keep wearing masks sometimes (like, when we have a cold), even after Covid is under control (fingers crossed),
as they do in Japan and some other places.