I always have a journal/sketchbook on the go. I use a variety of books, sometimes gessoed old books, usually about A5 size, and of varying quality. As long as I can draw, paint, stick and write it doesn't matter too much. I always decorate the cover in some way. This one is a bit basic, and was trying to be optimistic in light of the world with the word happy. Then Mum died and I changed it to not now.
I didn't set out to make a pandemic journal, but that is the main subject as that is what was happening. There is nothing profound, just doodles and things that were on my mind. 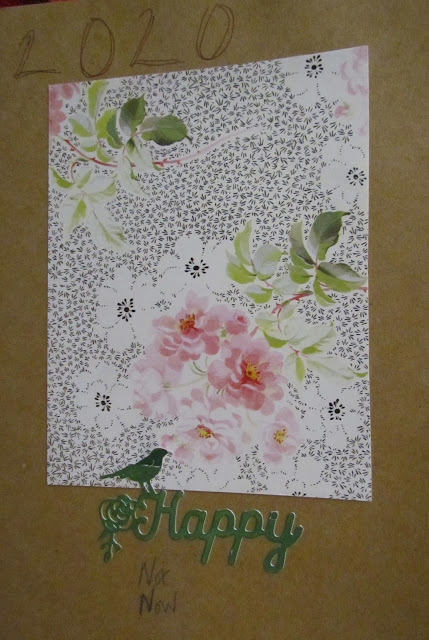 Some things always end up loose in the back, waiting to be stuck in. There are not many in this book.
This was given to me by one of the girls in the class I had during the last week of school in March. 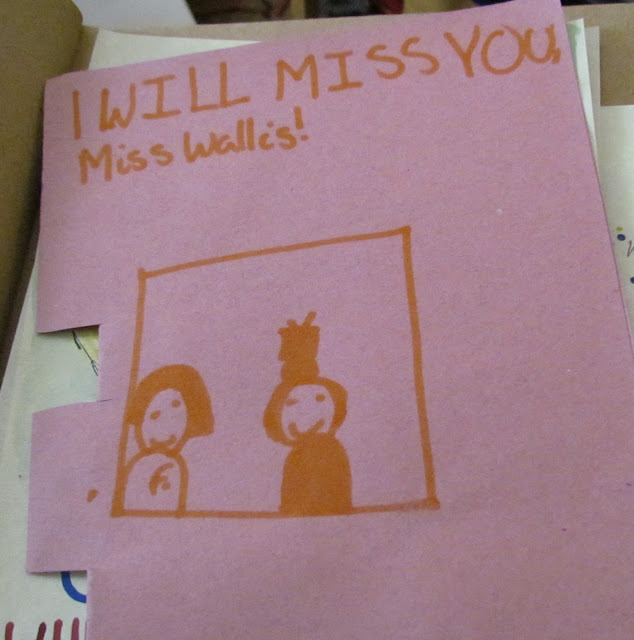 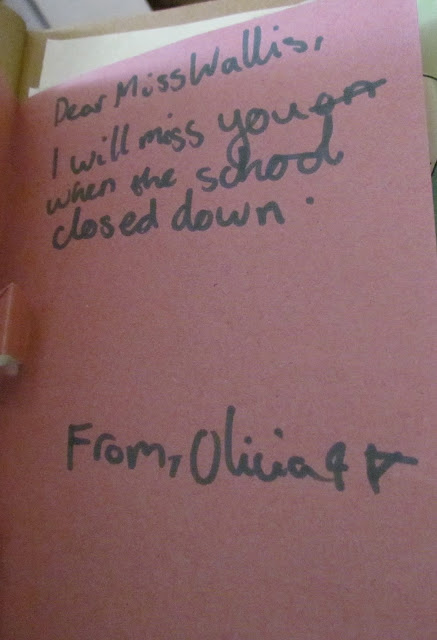 I always write the month and an arrow, filling in the final month when it is finished. Already Corona virus was on the news all the time, and the rainbow was being used as a symbol of the NHS. Hence the childish doodle on the left. 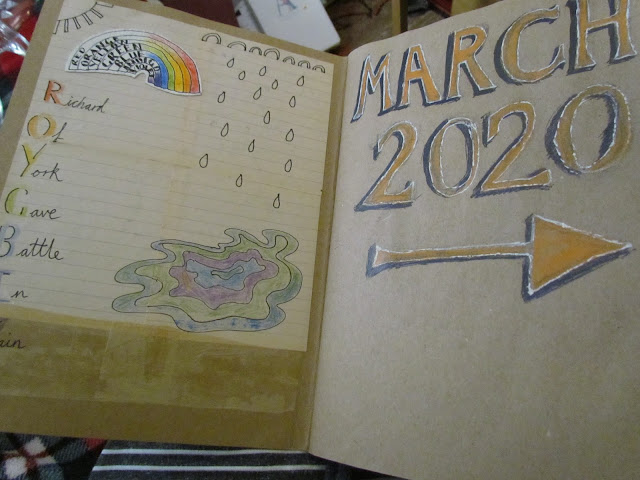 This is when I was trying really hard not to be scared of what was happening, but not doing very well. Little did I know the great personal cost the virus would have for me and my family. I made the crocheted virus as a way to focus on something while watching the increasingly disturbing news. This is my blog post printed out. I don't normally do that, but I had already written what I wanted to say so thought it easier. 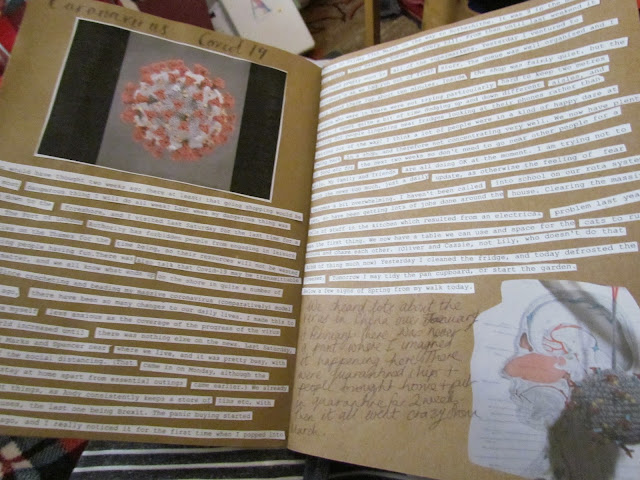 This flier and advert had been hanging around the house for a while. I think I stuck them in the week McDonald's shut. 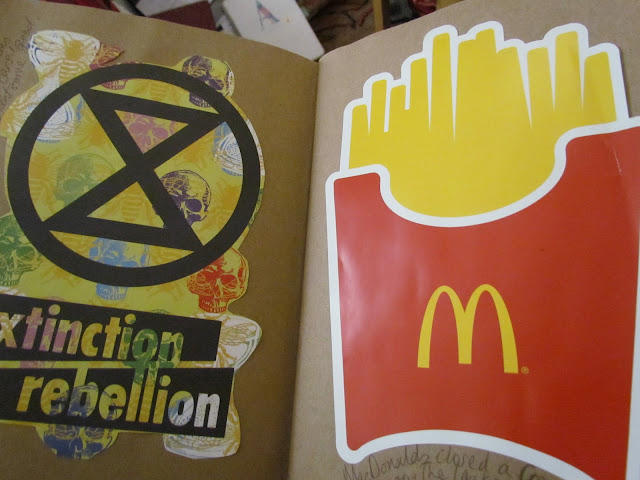 This was a very long book which took up a lot of the first few weeks of lockdown. I really enjoyed it. There was so much interesting detail that painted a picture of life then. It was a book I bought for the cover and dust-jacket, so I am glad I read it! 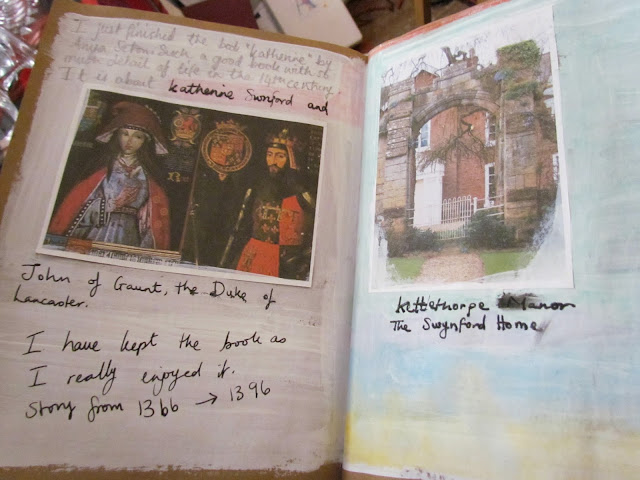 Doll plan based on a bottle part I found on the foreshore. It says 'Liquor Bottle Scotland ' on the bottom and I was going to do something about liquor. But then when I was searching in vain for a similar bottle, I also searched for sailors and liquor because of the Thames. What I found was information about sailors making macrame covers for liquor bottles. That led me down another path and the doll changed. I still used the bottle though! 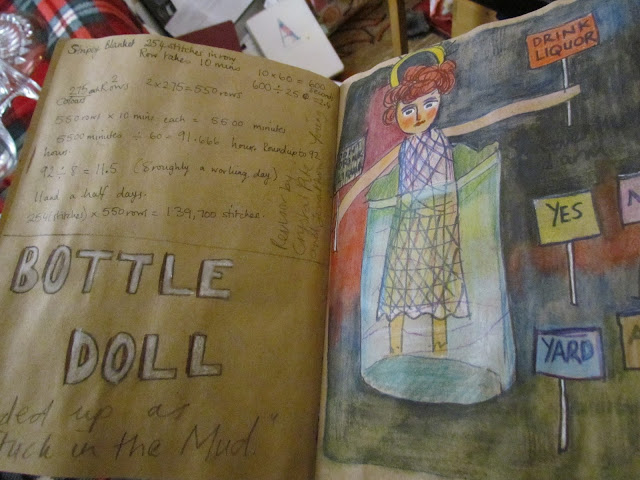 This page also includes my workings out for how long the stripey blanket took me to complete. 11 days! 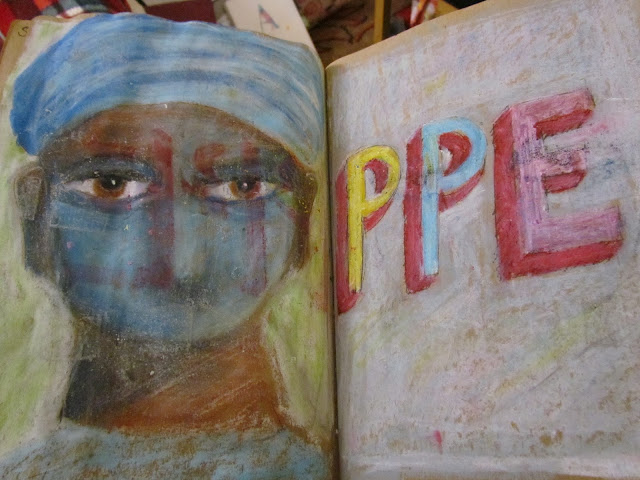 Page above-relating to the PPE shortages at first here. Page below, doodles and one of Mum's stories during one of our phone-calls. 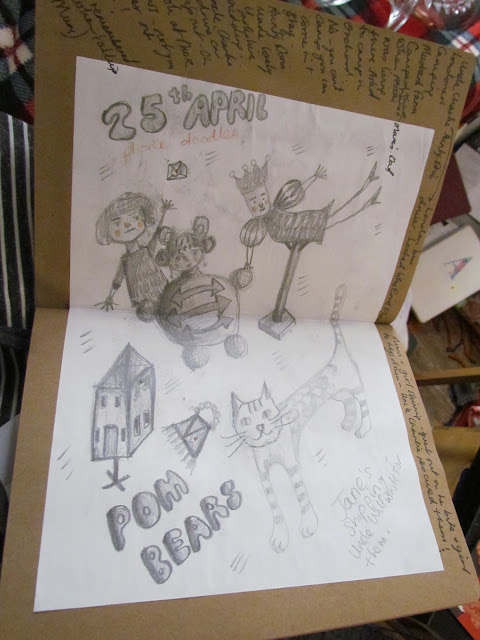 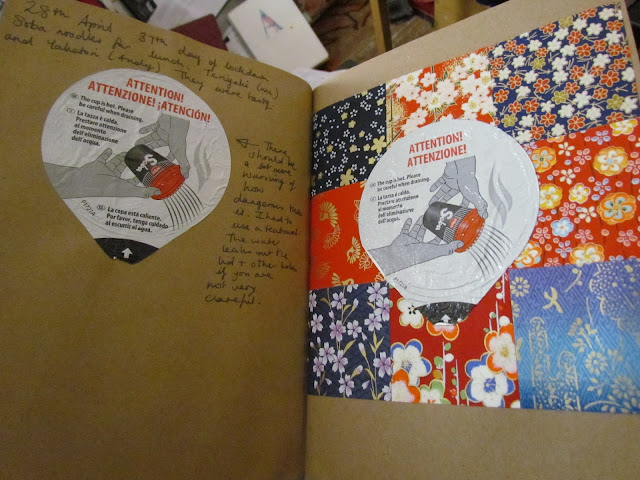 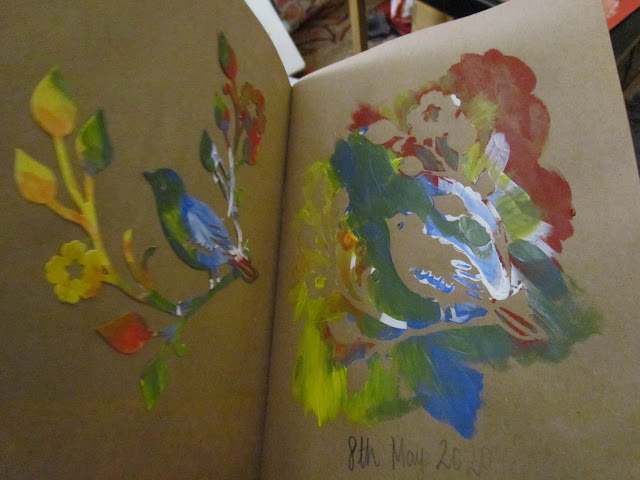 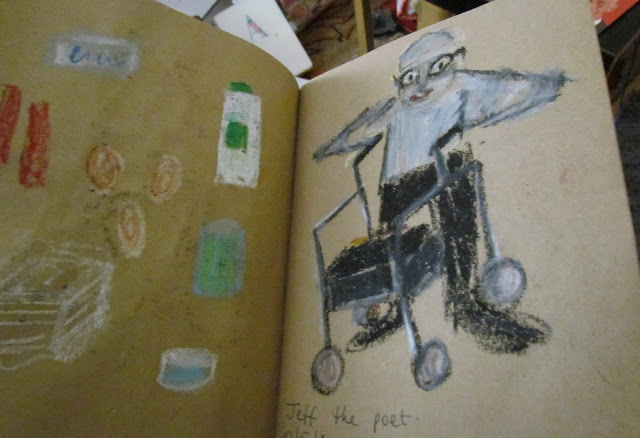 I was on the way out to feed Chacha one day, when an oldish man spoke to me just outside my house. He asked if I had a couple of pounds as he was going to the shop because he had run out of food. I know people try it on but there was something about him that made me talk to him. He was waiting for his pension, had run out of food and was hungry. I didn't have any money to give him, but I went back indoors and got him a few basics from the house. Some eggs, cheese, milk, tuna, bread, beans and coffee. When I got back outside, a woman and her daughter from just up the road were helping him up. He had tried to push his walking frame onto the pavement and fallen down. Once he was up I gave him the food. He put it into the handy under seat storage in his walker, and carried on chatting, telling me that he was a poet and had written a lot of poems. He said he had refused a lucrative publishing deal once upon a time, as they were not offering him enough money. Not sure if I believed that. Then he proceeded to make up a poem about me and Andy (who had come out to see what was going on). Then he kissed me on the hand! (I know-but I couldn't stop him. Hopefully no germs went either way)

One of the long receipts from the early days of lock-down shopping. The panic went after about four weeks, and they pushed the hand scanners onto customers as much as possible which I love as it is so much quicker and efficient. We also got onto the delivery service so everything is much easier now.

For school we all had to paint one word of a quote to share with the kids. It was put together by one of the teachers and was lovely. 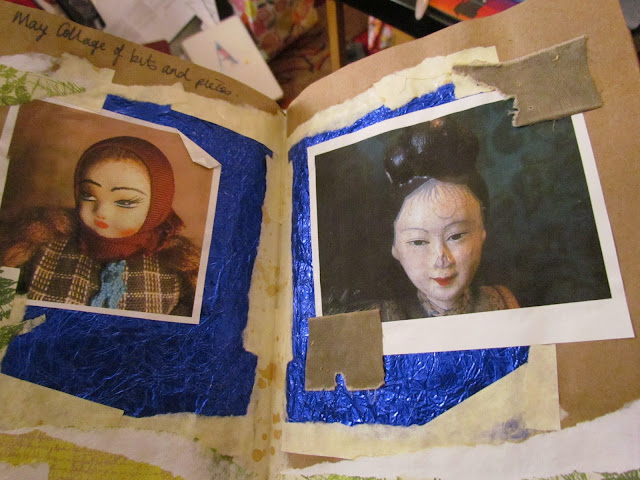 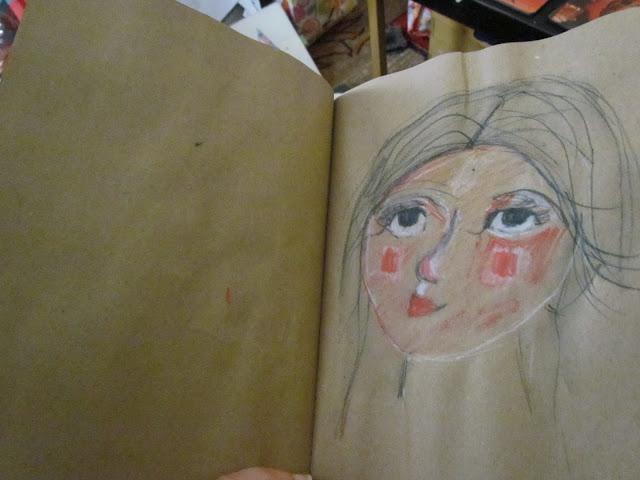 Weird face and doll plan. Not made this one yet, but have the piece of leather. It is inspired by the shoe doll in the Museum of Childhood in Edinburgh. It is a very sweet toy, which makes me sad but in a good way. 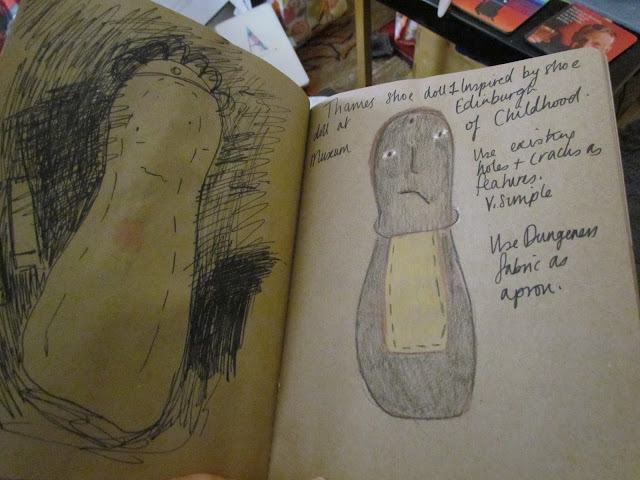 And then my Mum died. So now this journal is where I write my daily note to Mum. Today is day 53 which seems hard to believe. It doesn't seem like that. I didn't finish painting this page or make a very good job of it as I couldn't. Things are a little easier now, but I think I just don't let myself think about things too much. If I have to tell people who don't know then I get upset. I gave myself a week off going to Mum's house last week but went down yesterday and sorted out most of her clothes. I couldn't do that a few weeks ago but it was ok. I have three bags in my car for the charity shop, threw some away and kept a few things. She wouldn't mind and they are nice and I will wear them and think of her. I also had a look in the loft, and found some old stuff of mine, including three or four jars of beads, broken earrings and other small things. Just like jars I have now. I don't change, but I think I can. 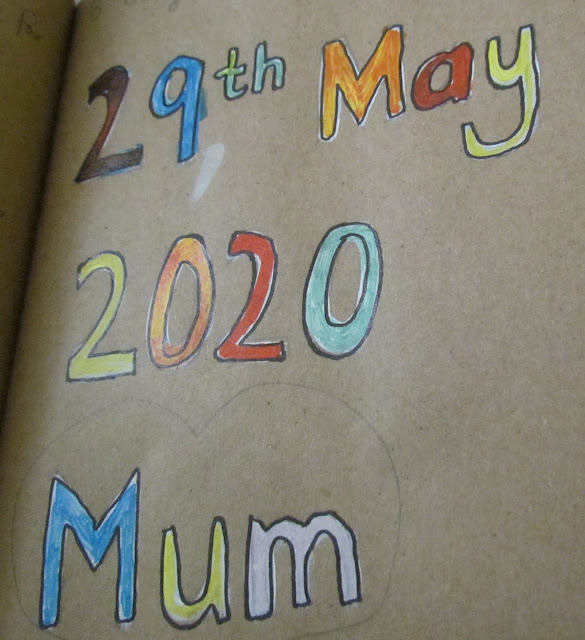 I have now started a new journal, and am keeping this one for writing. I did  a few emotional pictures just on paper. This is a quote from Mum's funeral service, which was taken by a lovely woman called Helen. She was so kind and calm and warm. I don't think I could do that job, in the face of bereaved people's emotions. 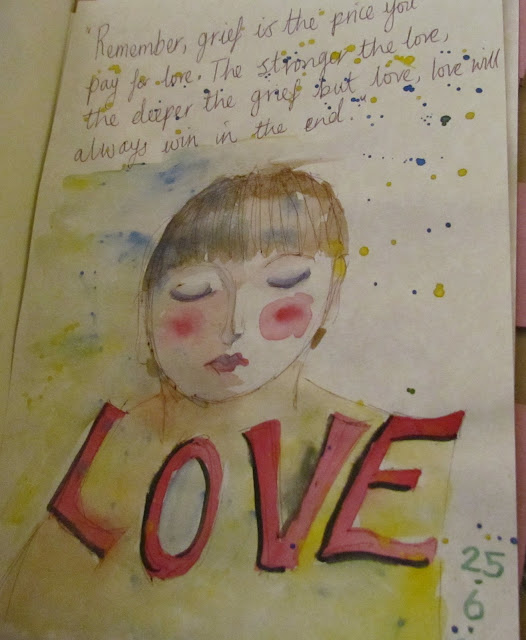 This phrase was in my head all the time once I thought of it. Language is a funny thing. 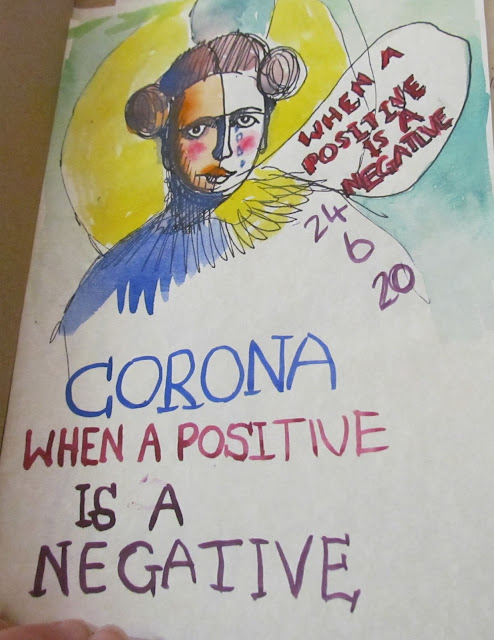 The face is of a sad person, not a gang member! It just struck me that the tears look tattooed. Though perhaps she is in the corona gang.
Posted by Sarah at 15:47

well, Sarah Belle, now I am crying....again, never goes away, composure teetering on the edge, any picture, word or telling can topple it into a puddle of tears. I love what you do always, good for you, keeping a journal - I can not believe it still- your Mum.
The children's notes are so dear.
The old guy also.
Sweet you giving him groceries.
Life is good, people like you make it so.

What a beautiful record of a terrible time--the PPE page captures the bleakness, tiredness, fear,--and with the sad, sad, sad ending of losing your mum.

"Happy
Not Now"
breaks the heart

You've got many fun bits mixed in there too--just like life.
The child's drawing in a box. (Love it!)
The dangerous noodles! ha!

What is the name of the book you read?

It is so tender and loving that you write your mother a daily note.
What a treasure of a daughter you are.

You remind me to remember the good times with my mother--there were many! we were very close when I was little, (but that sadly changed in her final years).

Have you started a new journal now?

P.S. Oh, yes, I looked again and see you have started a new journal. I hope you will Show and Tell that one too.
(Do children bring objects to school to "Show and Tell" in England? Or here in the US, for that matter---I loved it when I was a kid---sort of like blogging, come to think of it!)

I used to keep visual journals--my blog is my substitute now, but it's not the same--no texture, no hand work.
But also, takes no space, of which I have little, so that's a good thing.

You've done an amazing job chronicling these bizarre and tragic months. I know I've said it before but you're SO creative. I especially like the painted bird cutout and its negative-space mirror image on the opposing page. You're using your creativity to process all that's happened, for sure.