I have been trying to go for a walk every day but have not managed very well over the holidays-too much sitting around eating and drinking. On New year's day my Mum came for lunch and a couple of games of scrabble with Andy. I don't usually play as I get cross. I would like to like scrabble but don't really-I think I am secretly a bad loser but don't like to admit it. Oh dear. Anyway, after Mum had gone home we decided to go out for a walk. It was twilight when we left and properly dark by the time we came home. It was good though-cold and refreshing 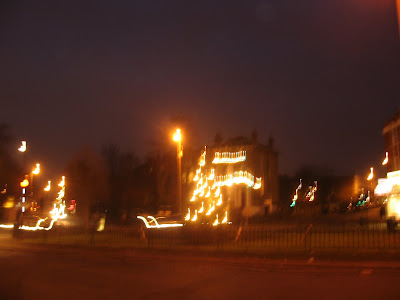 These are some local Christmas lights which have come out very blurry-but I like the effect-that is a tree in the middle-the lights look like musical notes don't they? 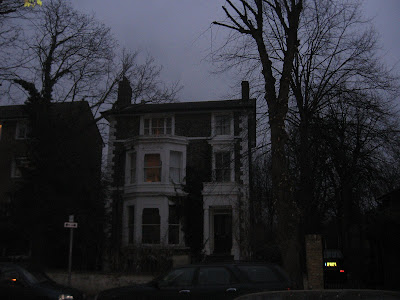 This house makes me think of a children's book illustration-the whole walk reminded me of a hundred and one dalmations-the old cartoon film version-the twilight barking part.
Walk number two was much shorter-we went to Sheppey planning to walk along the beach. We parked the car, got out and found that the temperature, plus wind chill factor made it ridiculously cold. I had a hat and scarf but Andy didn't. (He only has one scarf-I will tell it's story another time-and he is always losing it) Even with my hat and scarf it was too cold-my eyes were watering so much that I mistook a sanitary towel for a large cuttle fish. That was disgusting thing number one that made us laugh. Number two later. Here is a picture of a more pleasant section of the beach with slipper shell, flint, an oyster shell and some bladderwrack. 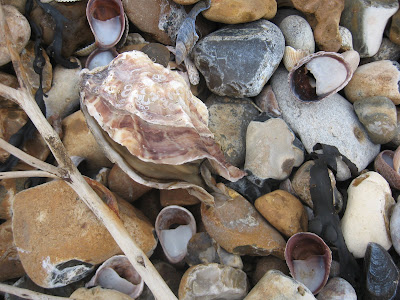 This does not convey how cold it was. A brave dog was going for a paddle and looked very enthusiastic like only dogs can. 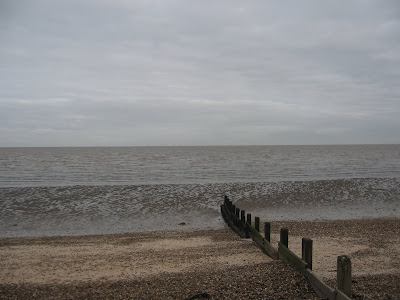 After our walk was cut short we went for a lovely pub meal at a place called Harty Ferry. The highlight of the meal was an absolutely delicious suet treacle pudding. It surpassed all expectations. On the way back down the three mile long lane leading to the pub we encountered some twitchers. They are a strange breed with their extremely expensive looking telescope things and their large vehicles blocking up tiny country lanes. They tend to gather on small hillocks overlooking marshes in the winter. Not sure which species they were looking for -I think maybe birds of prey. 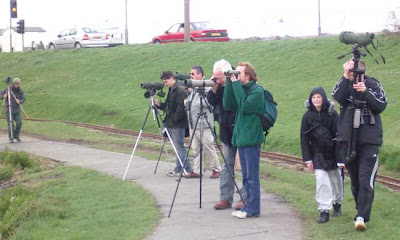 These are not the actual ones-they might have thought I was odd if I had taken a picture of them, while trying to squeeze my car past their rangerovers.
We got to the end of the lane. As I was looking right before I pulled out, I saw a large bird flying across the road-it was a kind of creamy colour. I saw it in my rearview mirror as I was pulling away, managed to turn round really soon, drove back and saw it sitting on a fence post-a beautiful barn owl. I have never seen one and was so excited!
A little further down the road Andy spotted a strange red headed bird rooting around in the grass with a load of other birds. We turned around again for another look-it was a green woodpecker. Another first! I thought it was funny how, just down the road from all the expensively kitted out twitchers, the birds were just throwing themselves in our path. We also saw two hawk type birds we didn't identify. I will just tell you the other disgusting thing-I apologise if you are of a sensitive disposition. As we drove away from the beach we saw some pigeons snacking on some discarded fried chicken (Sheppey is mainly lovely honestly!) I thought it was quite revolting that they are eating another type of bird. It is not as revolting as them eating sick on Oxford street outside-you guessed it-Kentucky Fried Chicken. Yuck. Yuck yuck.
Posted by Sarah at 12:14

We really enjoying going for walks too. Unfortunately there isn't much to see here but the same old stuff. Bryan's favorite bird is the owl. It's amazing that you got to see one. We have a Great Horned that lives in our woods. We haven't seen it but can hear it well on some nights. I have never heard of pigeons eating another bird. That is kind of weird. Maybe they're just eating the breading off the fried chicken instead of the meat.... nice thought, huh. :o)

Could be-makes me feel slightly better about the sight anyway!

Sarah, your winter walks are way more exciting than mine. Birds eating Fried chicken .(I think that is so funny in a disburbing way)
You seeing a Barn owl and a green woodpecker. And the house you showed is straight from a storybook. Makes walking in the cold very scenic.

Thanks Shell! I would love to go for a few walks in New York though!

Wonderful post, Sarah! The photos are such that I felt that I was there. I am a walker, too. We have woodpeckers in our trees here... and four red-tailed hawks. Huge birds, really.

The pub at Harty Ferry also does the best ever banoffee pie. Once we drove along the lonely road to it, and there were dead rats lying everywhere on the road, hundreds of them. As we wove our way between them, we came to a sign with an arrow which said "Home Made Meat Pies".

Thanks Candace. I love seeing birds-even the common ones like pigeons(a lot of people hate pigeons, I feel a bit sorry for them!)

That is truly worrying-about the rats and meat pies! We will try the banoffee pie next time. I love puddings!

I wonder how many Londoners eat pigeons? Bruv's friend used to trap them on his window-sill and make pigeon tandoori!
I saw a hedgehog eating chips in Kilburn once in the middle of the night. Somebody had chucked a bag of them on to the pavement and the hedgehog was tucking in.
When I worked as a domestic at a horrible summer holiday camp in the Lake District one summer as a teenager, I was horrified to see that they fed the pigs bacon scraps from breakfast-time.
That's enought horrible food memories. I love the beautiful owl!
Helen
x

Sarah, Happy New Year and what a wonderful walk you had! Thanks for sharing. At first I thought the owl was a painting! What a spectacular picture!

What beautiful photos! I love going for walks too & am fortunate that we have a nice path in the woods behind our house. We see lots of wild turkey, deer, coyote, foxes, herons and other birds.

Thanks for stopping by my blog! Glad to meet another Collate paper swap participant!

I just wanted to say that the bird photos are not mine! Wish they were but I am not that good or that quick. I got them from google images-I might go back and find the real photographers.

Glad to see you got some time at the beach, too!

Just in case you look and it does not make sense I removed the bird images as too many people thought they were mine and I do not want to deceive! If you go to google images and put barn owl or green woodpecker there they are for all to see! The flying owl was actually a painting-amazing!

I did really see the birds though!