£7 Bunny and Getting Things Done

I have been keeping busy when I can summon the energy, doing a list of jobs that I have meant to do for ages. I approach jobs in two ways. One, with lists, and two with areas to tackle. I am very bad at estimating the actual time a job will take me, so often leave them un-ticked, or transferred to the next day. The areas tackled this week include the top of the kitchen cupboards, the food cupboard and basket, my little painting/craft desk, the bear chair and doll bed, and the kitchen windowsill/plants/sink area. The top of the kitchen cupboards house, among other things, 11 decanters, a collection of apothecary jars, a collection of cabbage pottery, a musical cake plate, vases and three different examples of aniseed liqueur jugs. The decanters are Andy's, (except two) as are the jars-both from his family. The jugs are Andy's too. The vases are mine. I got rid of  a massive glass vase, a glass cake stand, some dessert bowls, wine and brandy glasses. The kitchen windowsill now contains far fewer things, as a few of the plants were beyond saving. I re-potted a couple, and the end of the windowsill contains pretty glass things that the sun will shine through. Today I dusted and polished the small collection of lovely wooden things in the hall. A couple of days ago I also got rid of some old sunflowers that were there, so I could put the re-potted dragon tree there. I am not sure if I should cut it off and plant those bits, and let it re-sprout, as it has got very tall. I need to investigate if you can actually do that. The reason for all the tidying is mainly because I keep bringing things home from Mum's and need to make room. It is also with a view to finally getting the sitting room floor done and the bedroom finished. I decorated it last year, but was interrupted at the end by an electricity problem which meant taking up the floor in the sitting room. As we (I) have far too much stuff, that was not a simple task. I discovered wooden floorboards under the horrid laminate, and want to sand and varnish them. But that has not happened yet. It will be quite difficult as it involves moving large furniture to the kitchen, but the more clearing of small stuff I can do, the easier it will be. 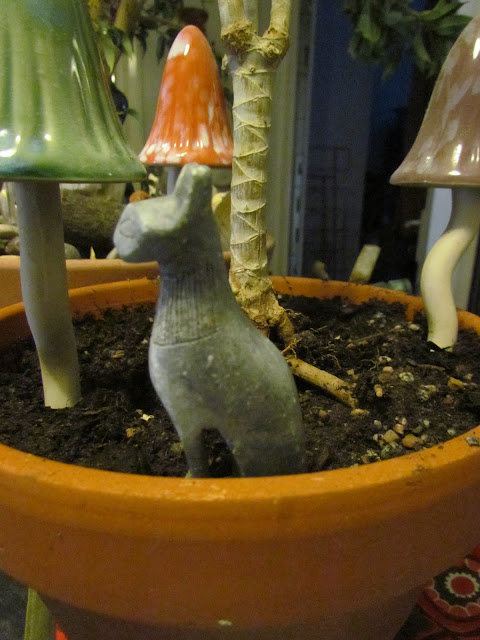 The ceramic mushrooms were a gift from a friend who I am no longer friends with. But I like them so they are staying. The cat was in the garden before but I thought he should have a new home. 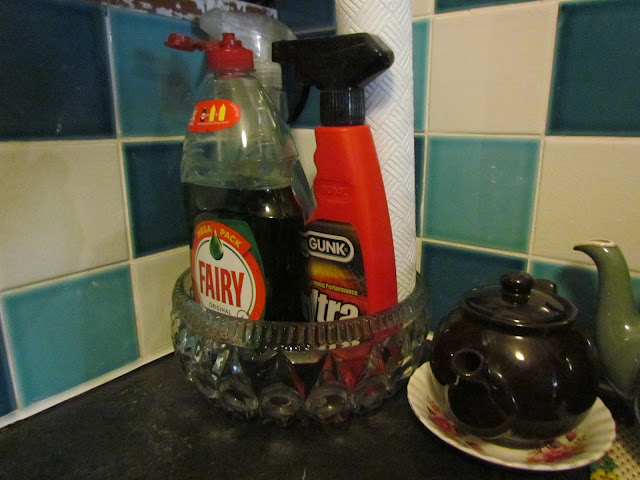 The glass bowl was on the way to the charity shop, but I decided to use it to contain bottles, instead of the plastic tray I had there before. 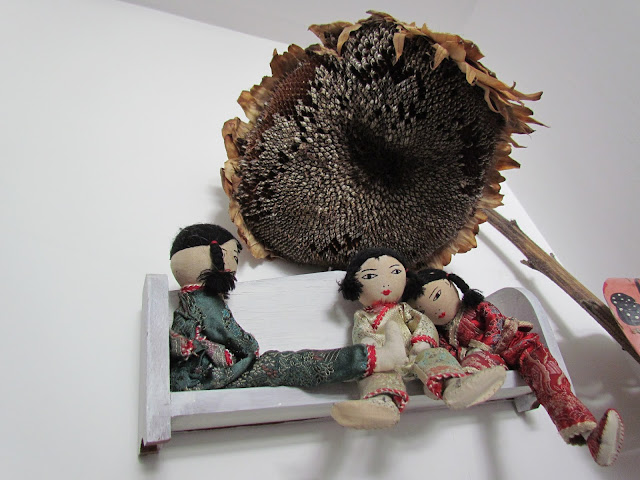 The large sunflower head has gone. I liked it but it had been there since the year before last so time to go. My reward for doing/finishing jobs is to carry on with making something. I can't knit at the moment, which I am finding very difficult, as I have hurt my left wrist, and I am pretty sure it is because of knitting. That is the hand that just holds the needle and doesn't do much, but I think I grip it too tightly. I have done a tiny bit since last week, but the pain just comes straight back. So this week I have been painting this bunny. He was from a good charity shop in Welling whch mainly has vintage things. I think bunny was the last thing I bought from there before lock down. I bought a bear from there a while ago, at the reasonable price of £5, all the more reasonable as he makes a noise when you turn him upside down and back again. More of a baa than a growl but still fun. He is called Welling. (My imagination wins again!) Bunny was there for a while before I decided to rescue him. £7 seemed slightly overpriced, but I have grown to love him. I love his colours. When I first started to paint him, I did his fur a kind of creamy yellow. Then when I moved him to the desk with more light, I decided that he was more of a dirty grey, so he had another layer. I have been using acrylic inkns, with gel medium added to them. (Thanks Linda Sue!) I intended to delicately sew over the seemingly drawn on features, but I have not finally decided. 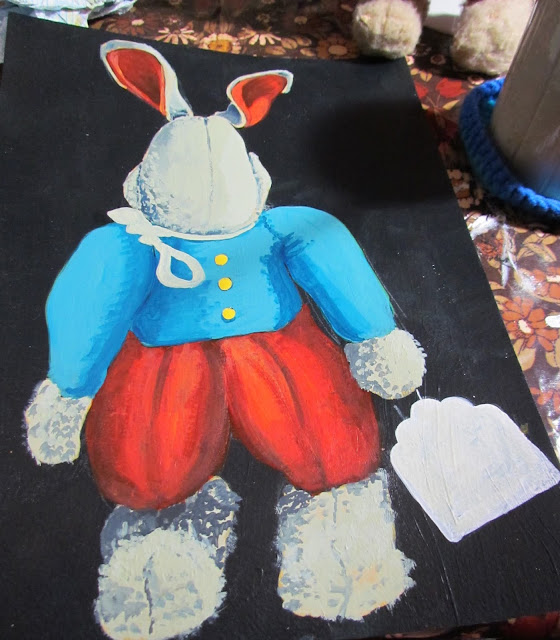 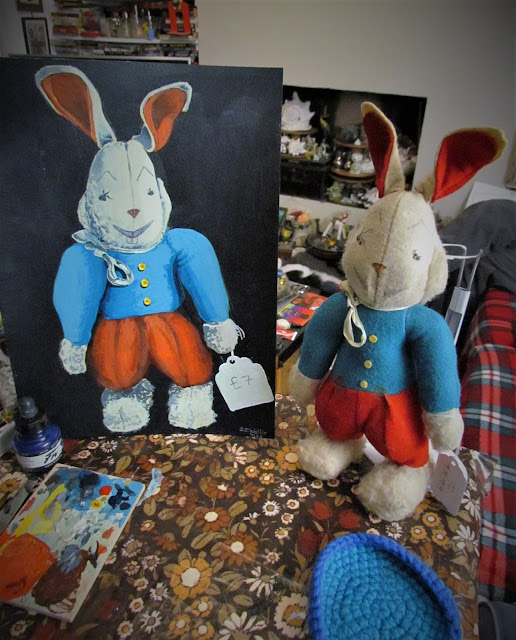 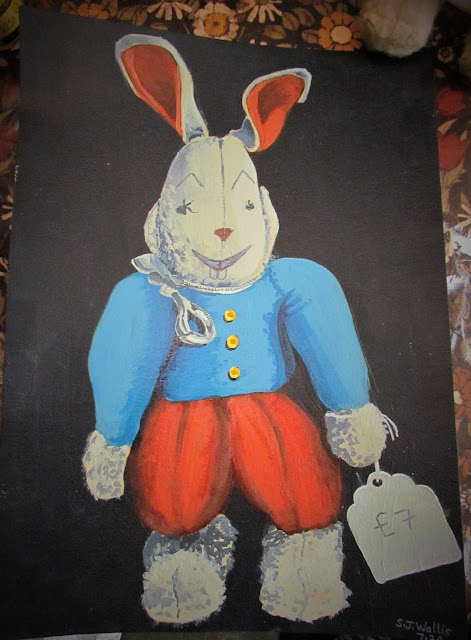 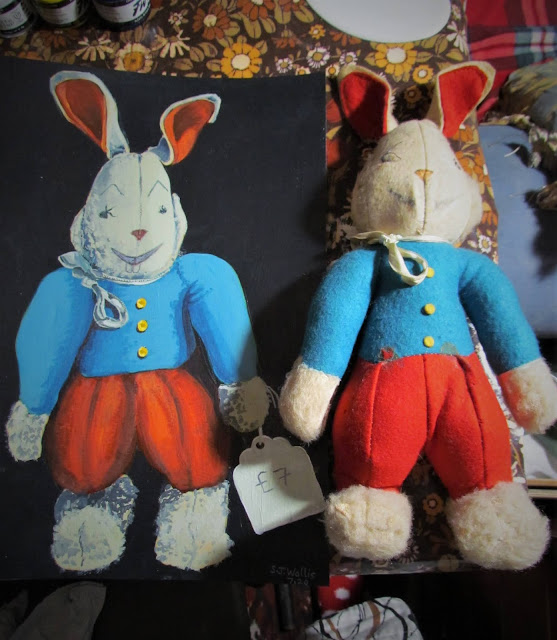 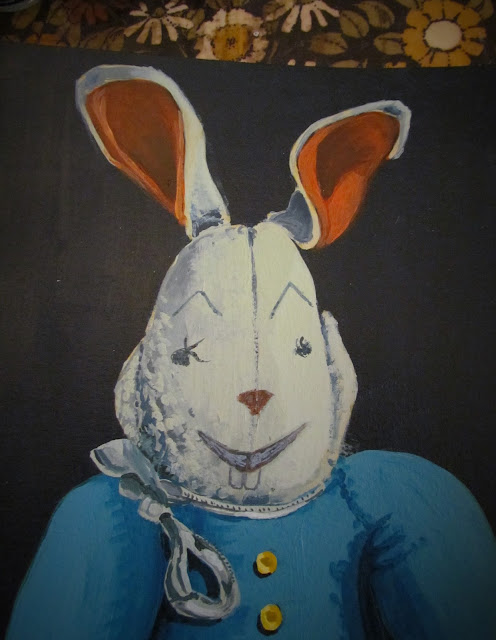 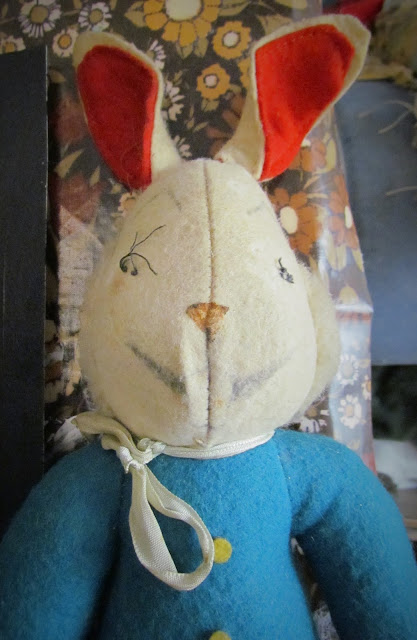 Sir Bunbun is a bargain at any price! You have painted him perfectly. Your sorting and clearing out projects are mighty ambitious. Tired just reading about your day. I cleaned one bad corner today.
Going through our house and all of the hidden corners has been like going shopping with you, I find a few interesting things that I put in the KEEP pile but most of it will be recycled- back to the charity shop from which it came.
I am in the process of painting a rabbit too, it has been sitting on the table waiting for me to decide if it wants to be an atomic rabbit or a flower rabbit. My mood goes from pastoral to atomic explosions so frequently , can change mid thought, so the rabbit is left wondering.

Wonderful! I love that you paint portraits of your toys;
they are beautiful (the blue of the jacket!).
I imagine it's a nice way to get to know them better too, like anytime I look closely at something, I become more intimate with it.

The little tags of red at the top of Rabbit's trousers makes me wonder if he might have had suspenders at one time?

I especially like that you've painted the price tag.
Sadly, that's the sort of toy the ladies who sort donations would throw out, and that I rescue. I wish I had a better outlet for such toys though, as they rarely sell, and I don't want to bring them all home.

Anyway, this reminds me that I have an old stuffed rabbit I had to take apart to unstuff and washed--waiting for more than a year now for restuffing and reassembling.
When I go home I'll dig him out and fix him up.

Lots of activity at Chez Sarah! Bravo on the cleaning out -- we probably need to do some of that around here. I like your rescued bunny, though he looks a little like an evil clown bunny to me.

Nonetheless I am here now and would just like to say many thanks for a marvelous post and a all round interesting blog . many have been looking for a way out in un bearable marriages . While doing some research , I fell on this HOW TO EASILY OBTAIN A DIVORCE PAPER ONLINE TO SAFE YOUR LIFE FROM CRAZY PATNERS Article that changed my life and circle and made me have a new life legally with the help of the octopus tickets for valid divorce papers . Y’all don’t forget to join this TELEGRAM GROUP for more information . I have saved it and also added your RSS feeds, so when I have time I will be back to read much more, Please do keep up the fantastic work.